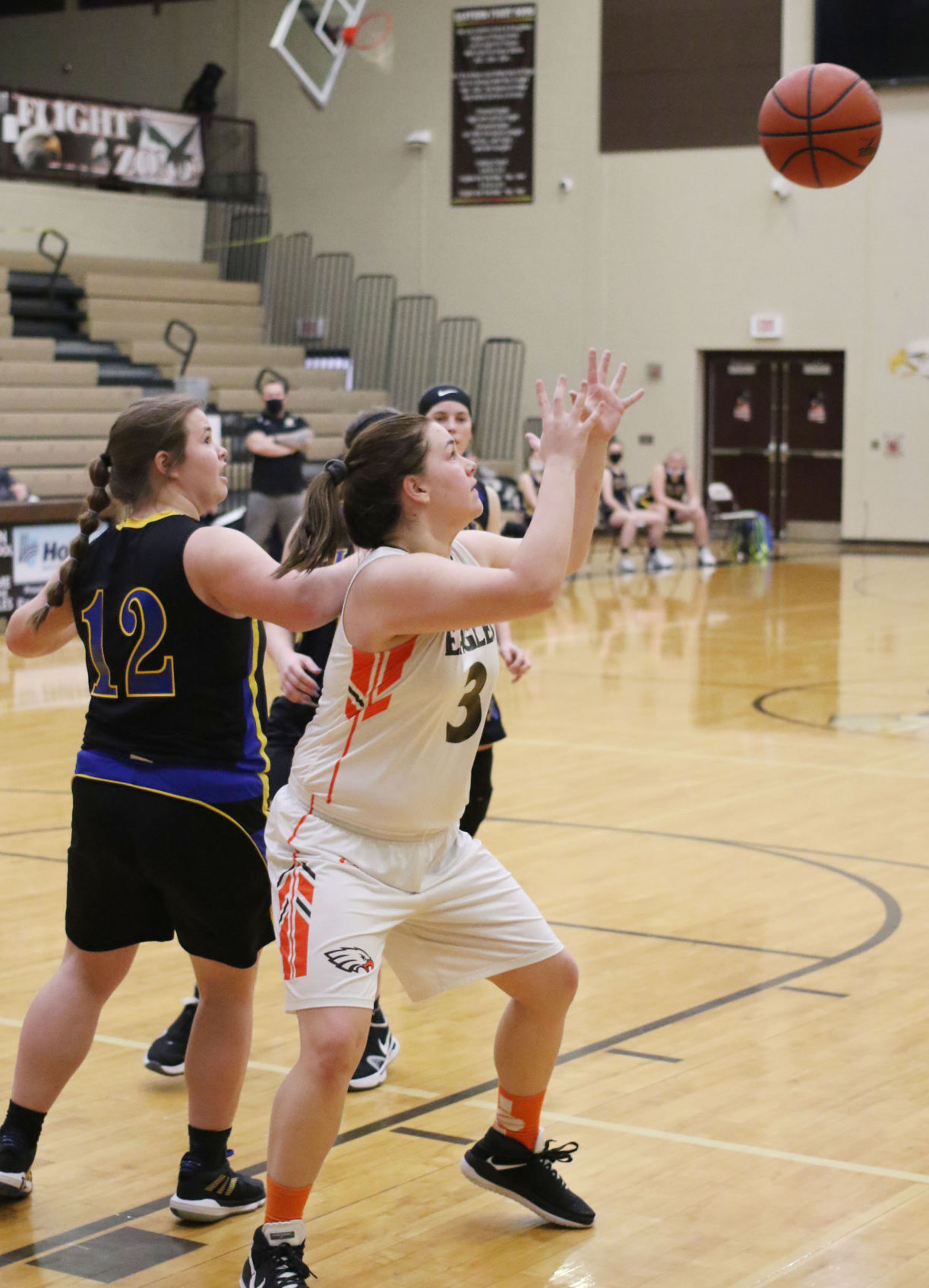 Eastern senior Skylar White catches a pass from a teammate on the perimeter during the second half of Wednesday night’s sectional semifinal basketball game. White scored six points in the 70-48 win.

Eastern senior Andee Lester rises for an off-balance shot over a Clay defender and off the glass for a bucket.

Eastern senior Skylar White catches a pass from a teammate on the perimeter during the second half of Wednesday night’s sectional semifinal basketball game. White scored six points in the 70-48 win.

Eastern senior Andee Lester rises for an off-balance shot over a Clay defender and off the glass for a bucket.

Putting three players in double figures and getting off to a fast start right from the tip, the Eastern Lady Eagles secured a 70-48 victory in a sectional semifinal over the Clay Panthers in Beaver Wednesday evening.

Led by Abby Cochenour’s team high 35 points, 24 of which came in the first half, the Eagles jumped out to an early lead over the Panthers and never looked back.

With 5:12 to go in the first quarter, Eastern jumped out to an early 12-3 lead. The trend continued throughout the quarter. Abby Cochenour scored off an assist by Skylar White to give the Eagles a 21-8 lead with 2:56 left in the first before Andee Lester beat the first quarter horn giving Eastern a 25-11 lead.

The Eagles would lead 32-18 midway though the second quarter before they bumped their lead to 20, 43-23 at the break.

“It’s a great win for our kids. They’ve waited a long time for this, taking their lumps throughout the course of the season in Division II of the SOC (Southern Ohio Conference) which is a really tough league. I think it helped make them more prepared for tonight,” said Eastern head coach Rick Bowman.

“They played with confidence and it showed. I thought we did some decent things offensively. I think we were able to slow them down defensively, but I think we still gave up to many open shots. We have to do a better job guarding the ball. They’ve endured a very tough season to get to this point, and I’m very proud of them.”

“Abby (Cochenour) scored tonight and we did a good job of getting her the ball where she could score. Andee (Lester) scored inside, and Addison (Cochenour) hit some shots from the perimeter. Everyone contributed, and even the kids that came off the bench, did a good job,” said Bowman.

“It doesn’t hurt us because the competition is very good. We’d like to have some games over the course of the season that are competitive for us, but it made us tougher.”

For the game Eastern was 28-of-55 from the field and hit seven triples. They were also 6-of-6 from the free throw line and forced 12 Clay turnovers. The Eagles will now head west down route 32 as they take on the Peebles Indians in a sectional final Saturday.

“It’s going to be a completely different animal for us. Peebles is a different team, and we’re just going to try to go down and continue to get better,” said Bowman. We know it won’t be an easy road for us, but we’re going to go down there and battle them.”