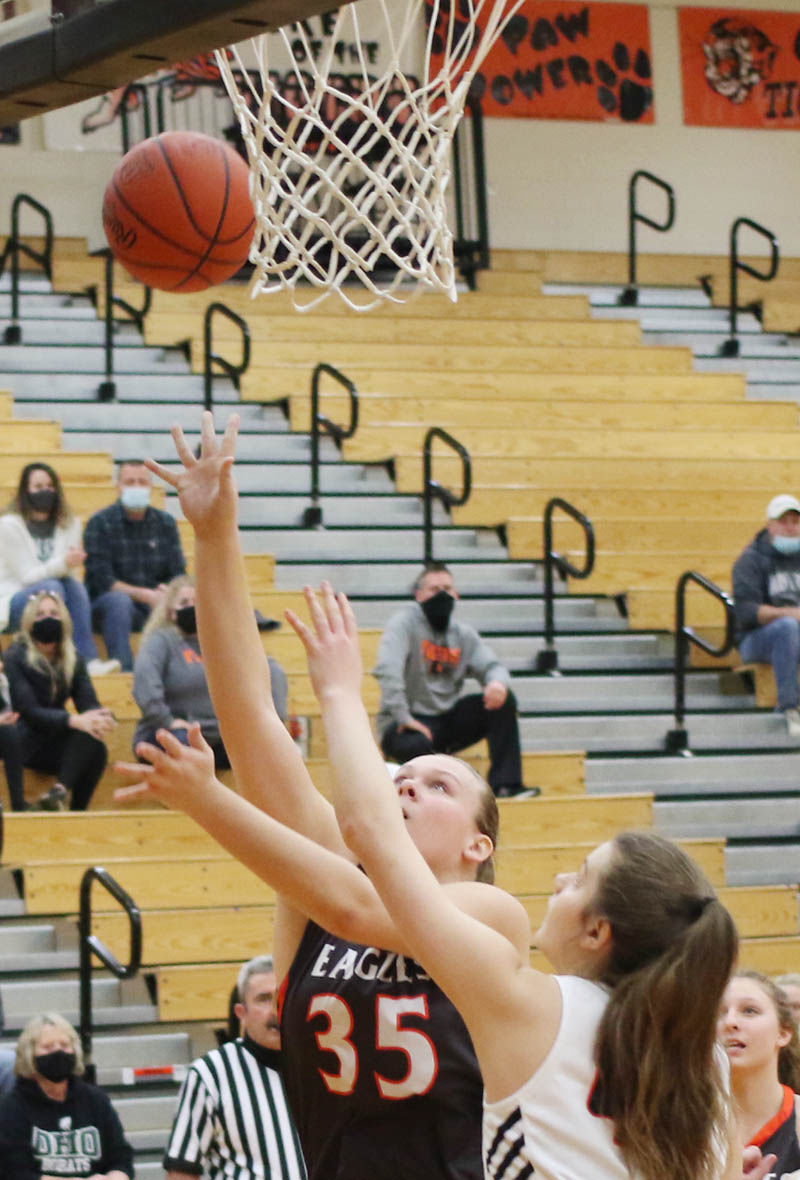 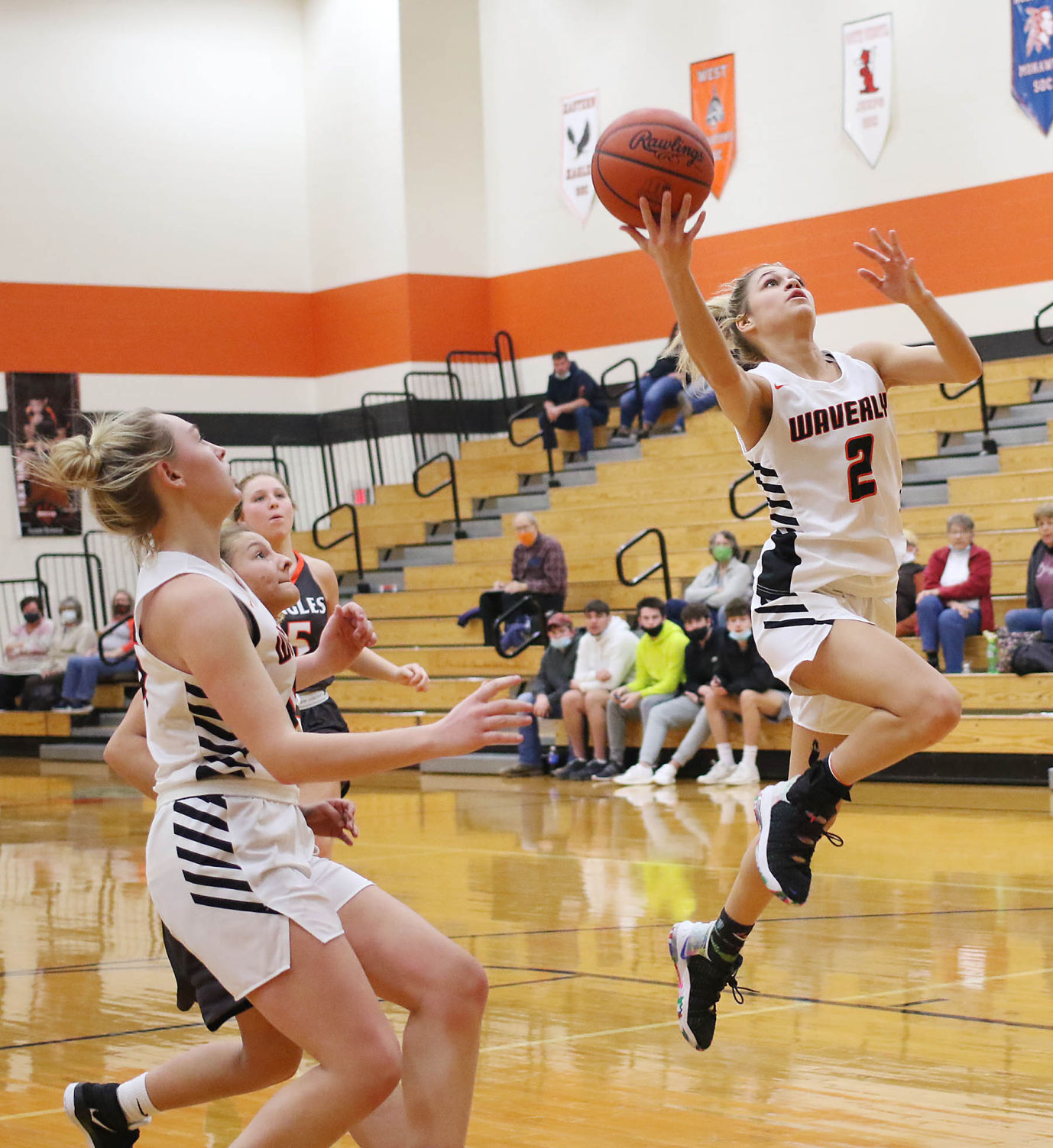 Waverly’s Carli Knight flies through the air on her way to scoring on a layup in the second half of Saturday’s game. 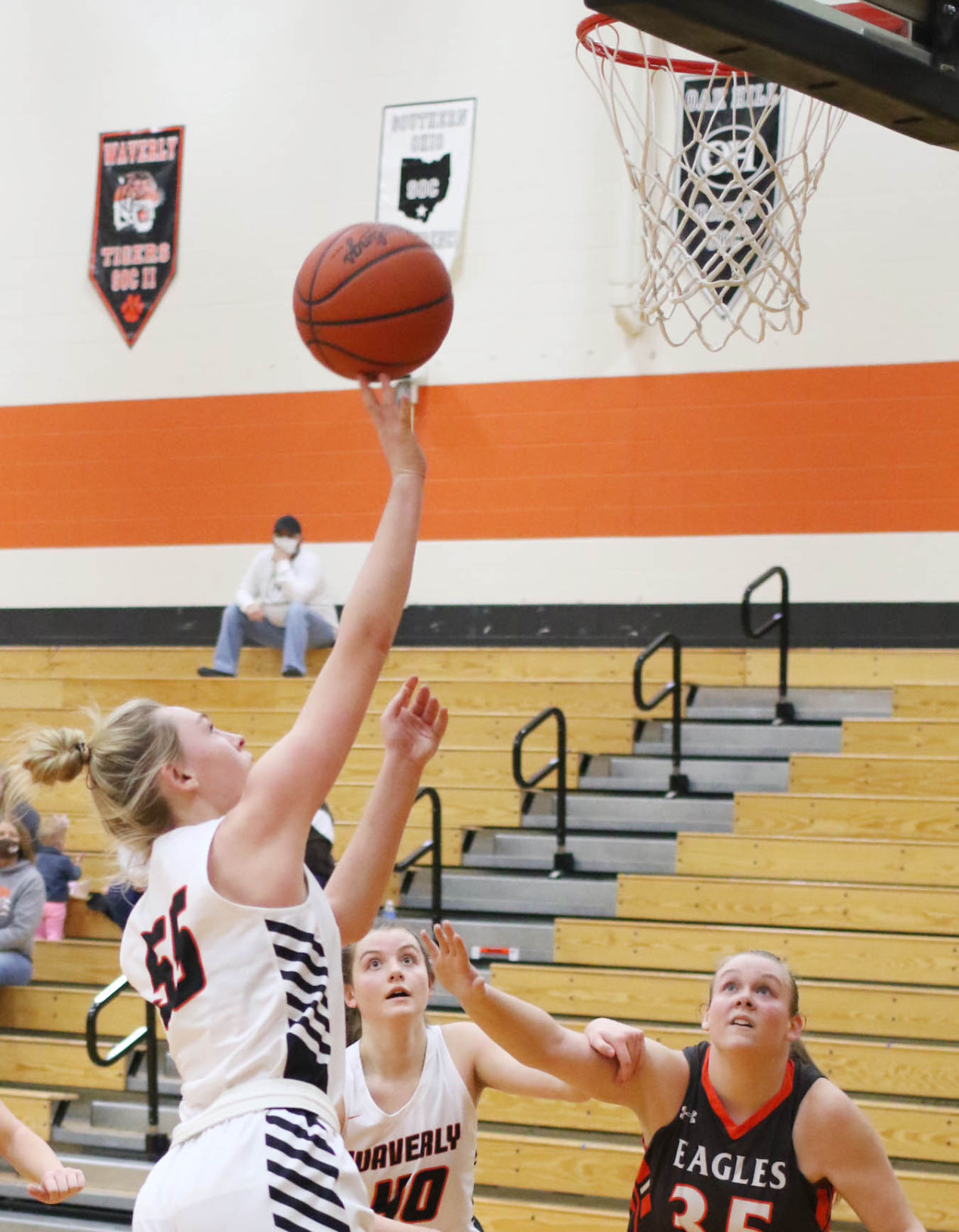 With Waverly's Sarah Thompson and Eastern's Andee Lester battling for position, Waverly's Paige Carter goes to the basket for a layup attempt. 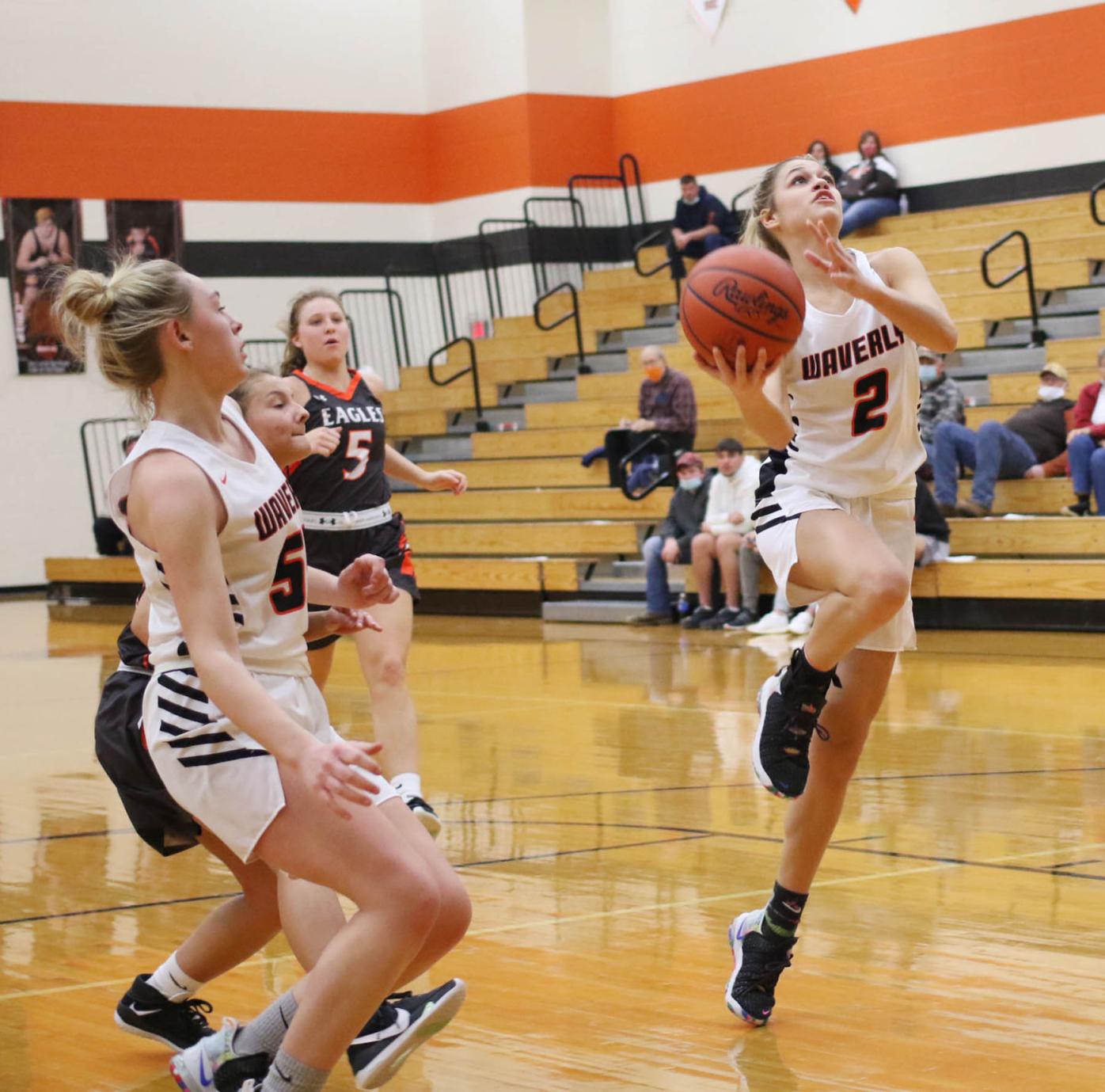 Waverly's Carli Knight starts to go up for a layup in the second half of Saturday's game. 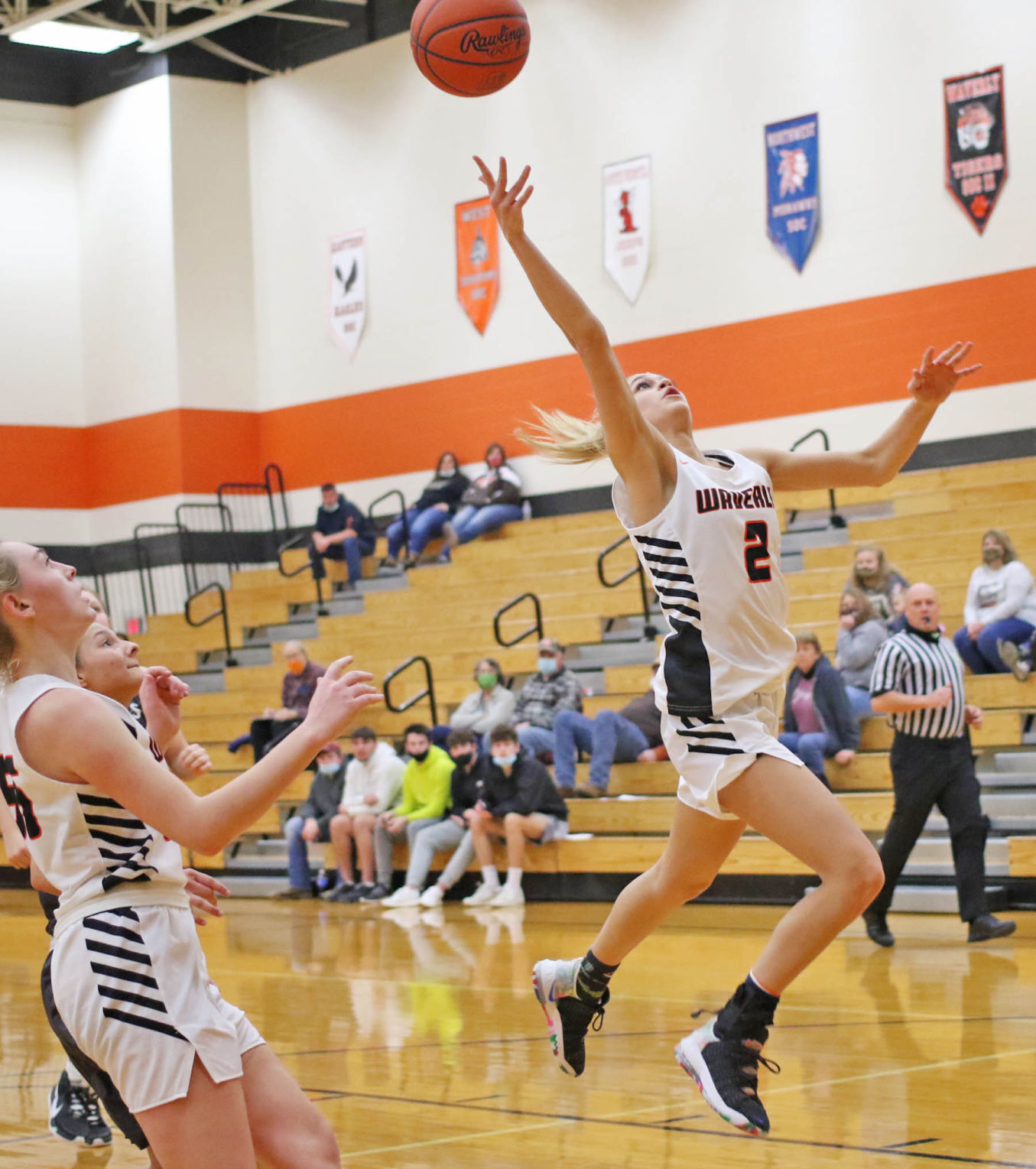 Waverly's Carli Knight flies through the air on her way to scoring on a layup in the second half of Saturday's game. 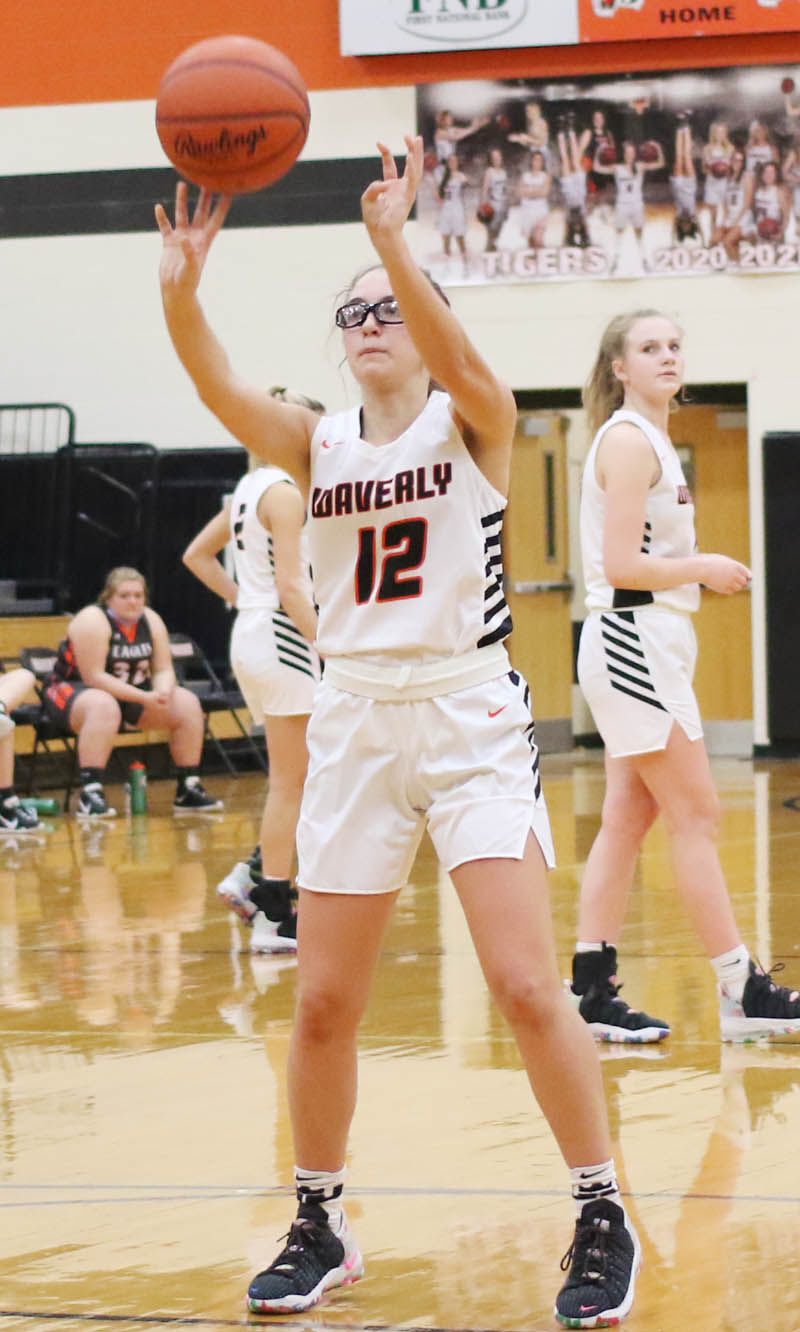 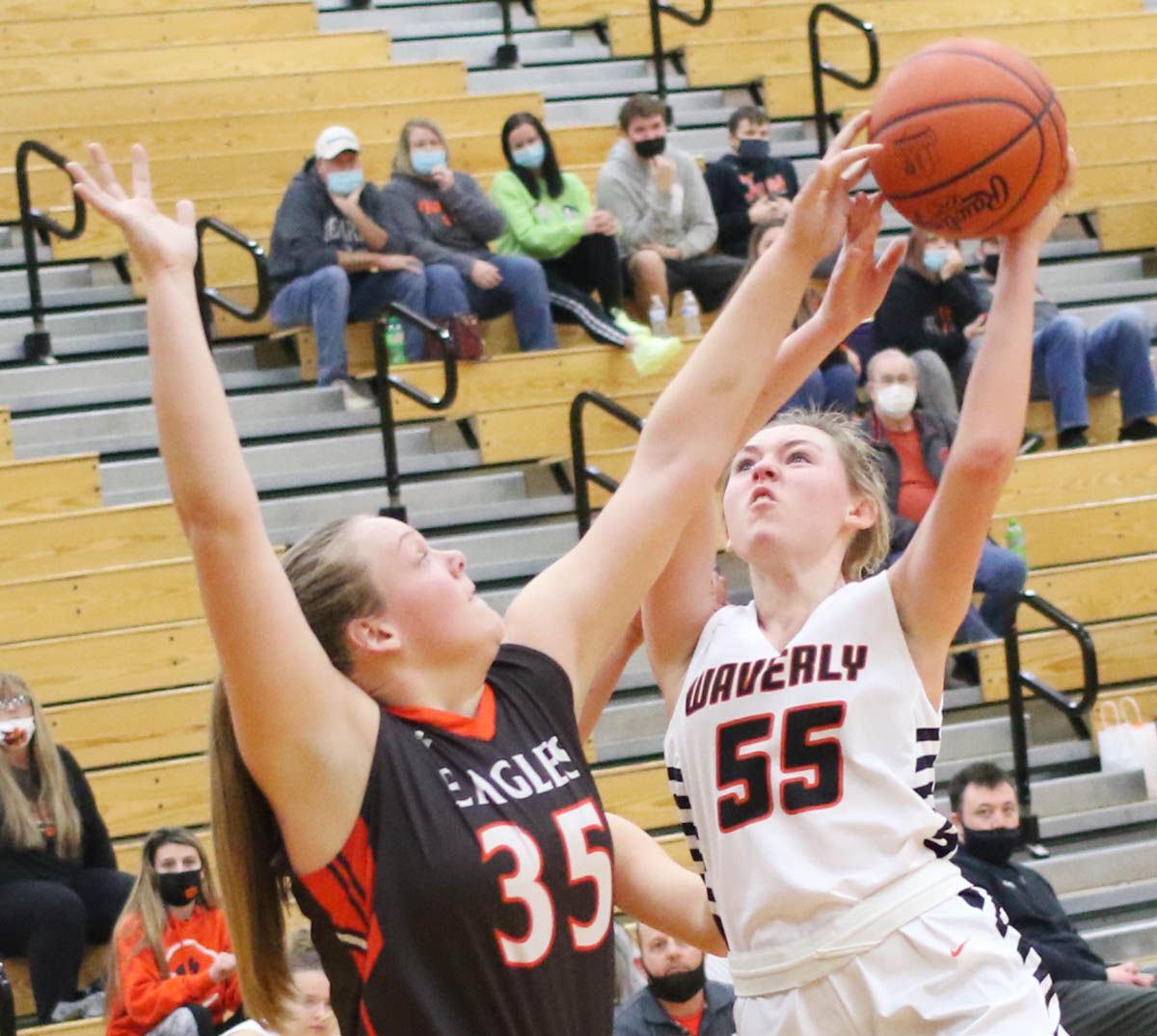 Waverly’s Carli Knight flies through the air on her way to scoring on a layup in the second half of Saturday’s game.

With Waverly's Sarah Thompson and Eastern's Andee Lester battling for position, Waverly's Paige Carter goes to the basket for a layup attempt.

Waverly's Carli Knight starts to go up for a layup in the second half of Saturday's game.

Waverly's Carli Knight flies through the air on her way to scoring on a layup in the second half of Saturday's game.

When the Lady Tigers find themselves behind their opponent on the basketball court, turning up the pressure is usually a key to their success.

That was the case in Saturday’s home contest with in-county opponent Eastern. Waverly used pressure to make a 10-0 at the start of the fourth quarter and never looked back, winning 68-57.

Waverly has been trying to find its way without senior point guard Zoiee Smith in the lineup. Smith suffered an ankle injury in the Valley game, and is working to get back for post-season play. In the meantime, that has forced the Lady Tigers to shift positions and learn additional roles. They believe that the adversity will pay dividends when Smith can return.

“In the first couple of games, we struggled without Zoiee. Now we’ve played four or five games and are becoming more comfortable,” said Waverly coach John Bonifield. “Life is always easier with Zoiee in there. Now we know if something happens and she gets into foul trouble in the tournament, we know we’ve learned to play without her.”

Since Saturday was ‘Senior Day’ for the Lady Tigers, Waverly’s four seniors were introduced as starters, including Michaela Rhoads, Paige Carter, Carli Knight and Zoiee Smith. As soon as the ball was tipped, play was stopped so Smith could return to the bench and be recognized by the crowd. She was replaced by sophomore Kelli Stewart. Eastern’s seniors, Andee Lester and Skylar White, were also recognized prior to the the game, along with the four Waverly seniors.

“After I took over the (Waverly Girls Basketball) program, the seniors were third graders in my second or third year coaching. From the time they were in third grade, you could see how well they played together and how physical they were,” said Bonifield. “They kept playing together and getting better and better. Since their freshmen years, we’ve thrown them to the wolves and said, ‘Sink or swim.’ They swam from the beginning and helped to turn our program around. They’ve brought us to higher heights than where we were before. They are leaders on and off the floor. It is great to have a core group like them. They make life easier and know how to play basketball.”

In Saturday’s game between Waverly and Eastern, the opening quarter was a back-and-forth battle. Eastern gained the initial lead with an inside bucket from Andee Lester before Waverly’s Sarah Thompson answered with a putback. The next three minutes saw Eastern’s Abby Cochenour get to the foul line twice, connecting on 3-of-4 opportunities. Kelli Stewart finally broke the three minute drought for Waverly, only to see Eastern follow with five quick points. Addison Cochenour took advantage of a three-point shot opportunity before Abby Cochenour made off with a steal and scored on a layup, putting the Lady Eagles up 10-4.

Waverly clawed back with junior Ava Little providing a lift off the bench, hitting a pair of three-point shots from the corner. Each time, the Lady Eagles answered with post buckets from Lester and Skylar White, staying ahead 14-10. The Lady Tigers forced three turnovers defensively, leading to buckets for Carli Knight and Thompson, tying the game at 14-14 to end the quarter.

Starting the second quarter, the first three minutes ran off the clock without either team scoring. Paige Carter delivered a block defensively for the Lady Eagles, but Addison Cochenour was able to score on a putback, putting Eastern ahead 16-14. Waverly responded by moving ahead on an 8-2 run, having scoring contributions from Thompson and Rhoads on the foul line, and Carter, Stewart and Knight with buckets, 22-18. Eastern moved in front again with a five-point burst from Abby Cochenour, 23-22. Once again, Waverly’s pressure created turnovers in the final two minutes, resulting in an 8-2 run to go up 30-25 at halftime.

Coming out of the break, the Lady Eagles scored six straight points to take the lead again, using baskets from Abby Cochenour, Lester and White. Waverly regained the lead on a three-point play from Carter, only to see Eastern’s Kelsey Helphenstine take it back with a trifecta, 34-33. Waverly rolled back ahead with an 8-0 run, using scoring from Carter, Knight and Thompson, 41-34. Once again, the Lady Eagles rallied, coming back on an 8-2 run with scoring from Cochenour, Lester and White to get within one, 43-42. Carter gave the Lady Tigers a lift with a trifecta before the third quarter came to an end, increasing the lead to 46-42.

Opening the fourth quarter, the Lady Tigers pulled away with a 10-0 run, using scoring from Stewart, Knight and Carter to go up 56-42. The Lady Eagles made one final push, cutting the lead to eight twice more; but the Lady Tigers continued to score, putting the game away and ending with two final free throws from Michaela Rhoads, 68-57.

For Eastern, Abby Cochenour generated 30 points in the loss, followed by Lester with 13 and White with six.

“We played hard,” said Eastern coach Rick Bowman. “Our girls felt like they were in the game. We’re so young and thin (depth-wise), it is like survival every night.”

For the Lady Tigers, Carter turned in a double-double with 24 points and 10 rebounds while handing out five assists. Knight scored 16 points, adding six steals, four assists and two rebounds from the point guard spot.

“Carli has really taken that point guard role. She hasn’t missed a beat,” said Bonifield. “Her assists have gone up and she’s not leaving the floor. Her tenacity on offense and defense sets the tone for us. This is a special group. I hope we can make a nice tournament run for them.”

The Lady Tigers (15-6, 10-5 SOC II) will be off until Feb. 18 when they take on Jackson at 7 p.m. in a Divsion II sectional final battle at home. Waverly still has one Southern Ohio Conference Division II game to play as well versus Northwest that will be scheduled at a later date.

The Lady Eagles have a game to make up at Valley on Wednesday. Eastern will open post-season play at home on Monday versus Portsmouth Clay at 7 p.m. Then they will play Valley at home on Feb. 17.