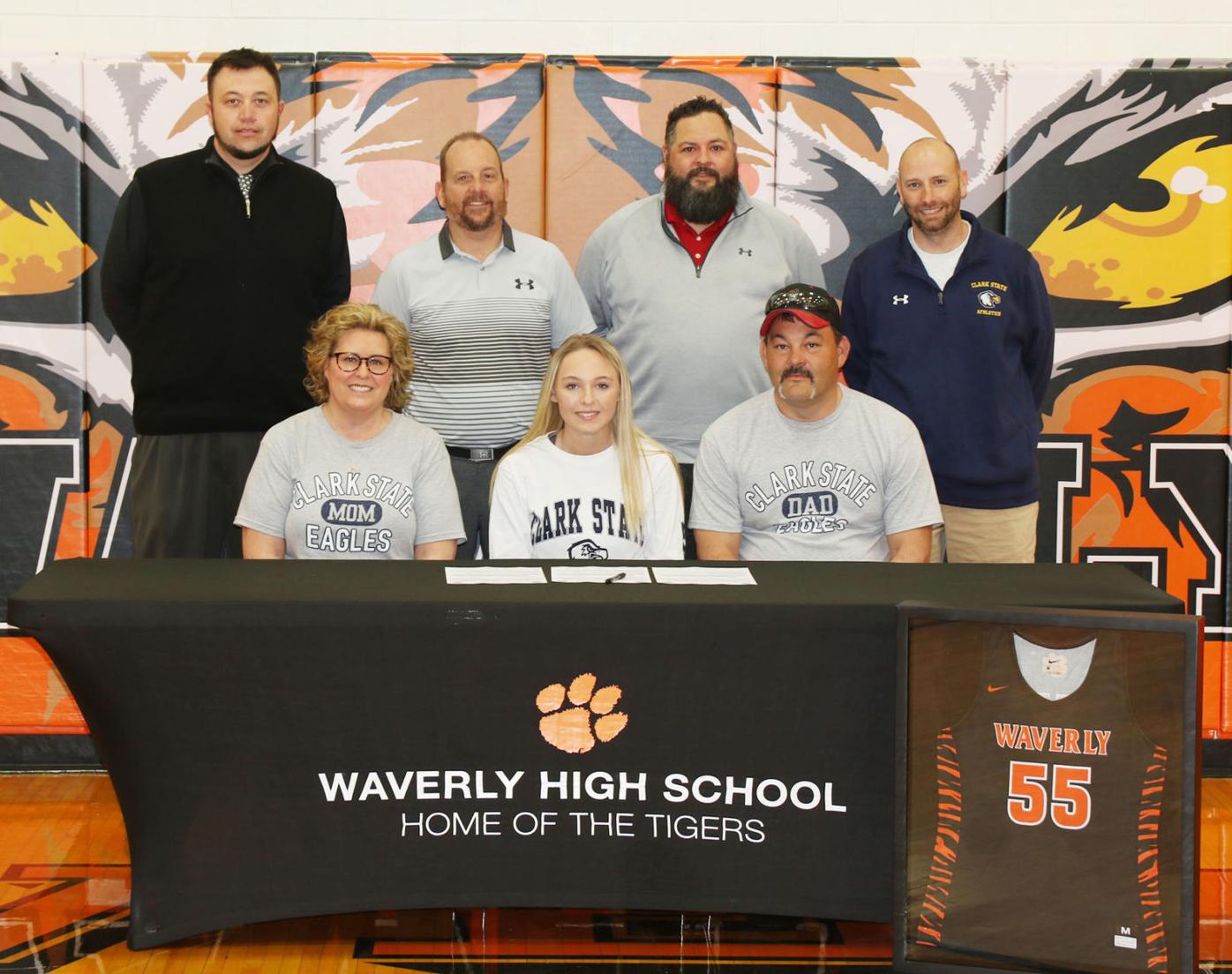 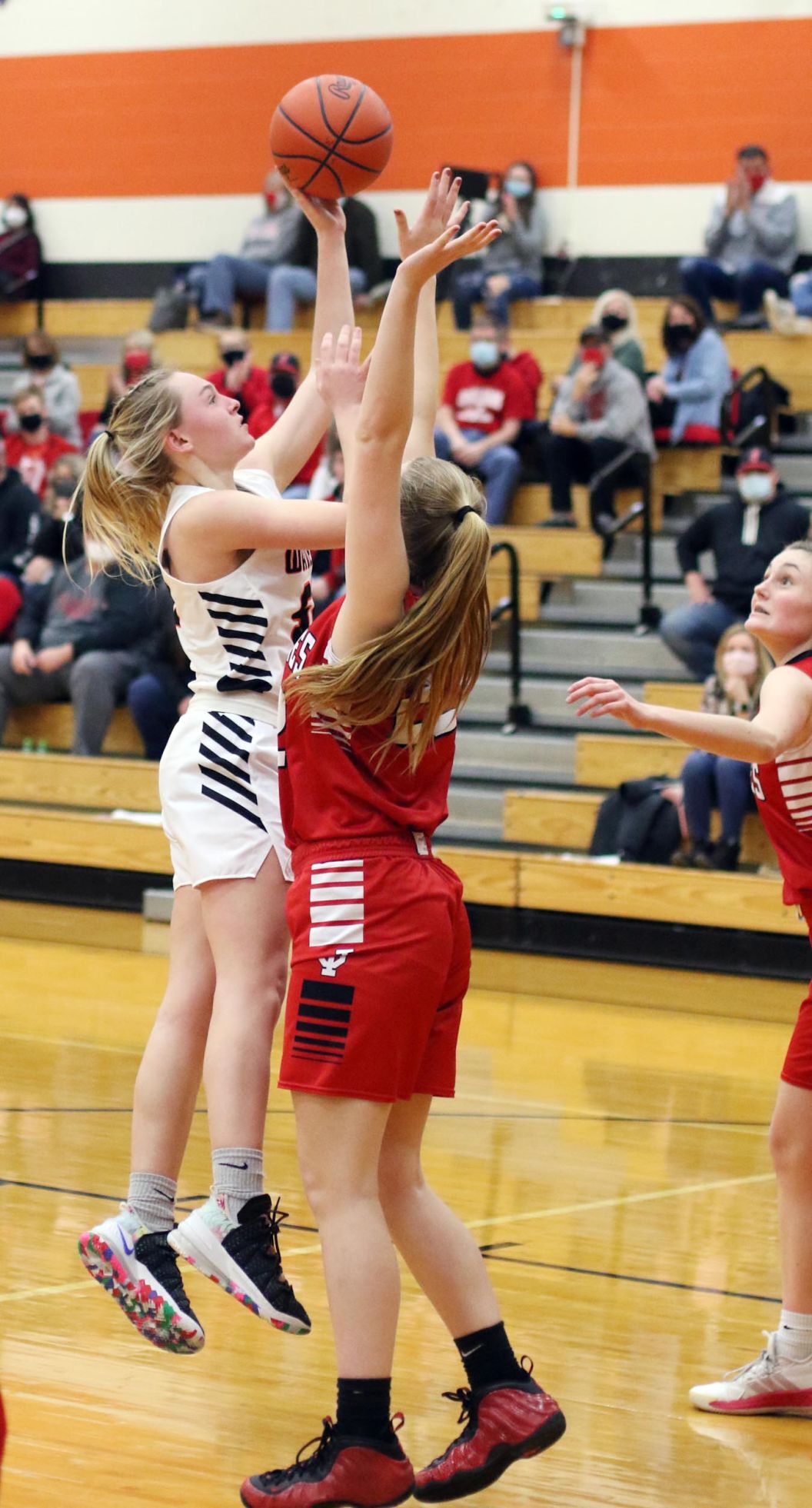 The ability to spin and shoot with either hand, as well as jump and rebound, allowed Waverly’s Paige Carter to score more than 1,000 points in high school and pull down close to 800 rebounds. She is shown her spinning around and out-jumping a taller Jackson defender in the sectional game for a left-handed shot. 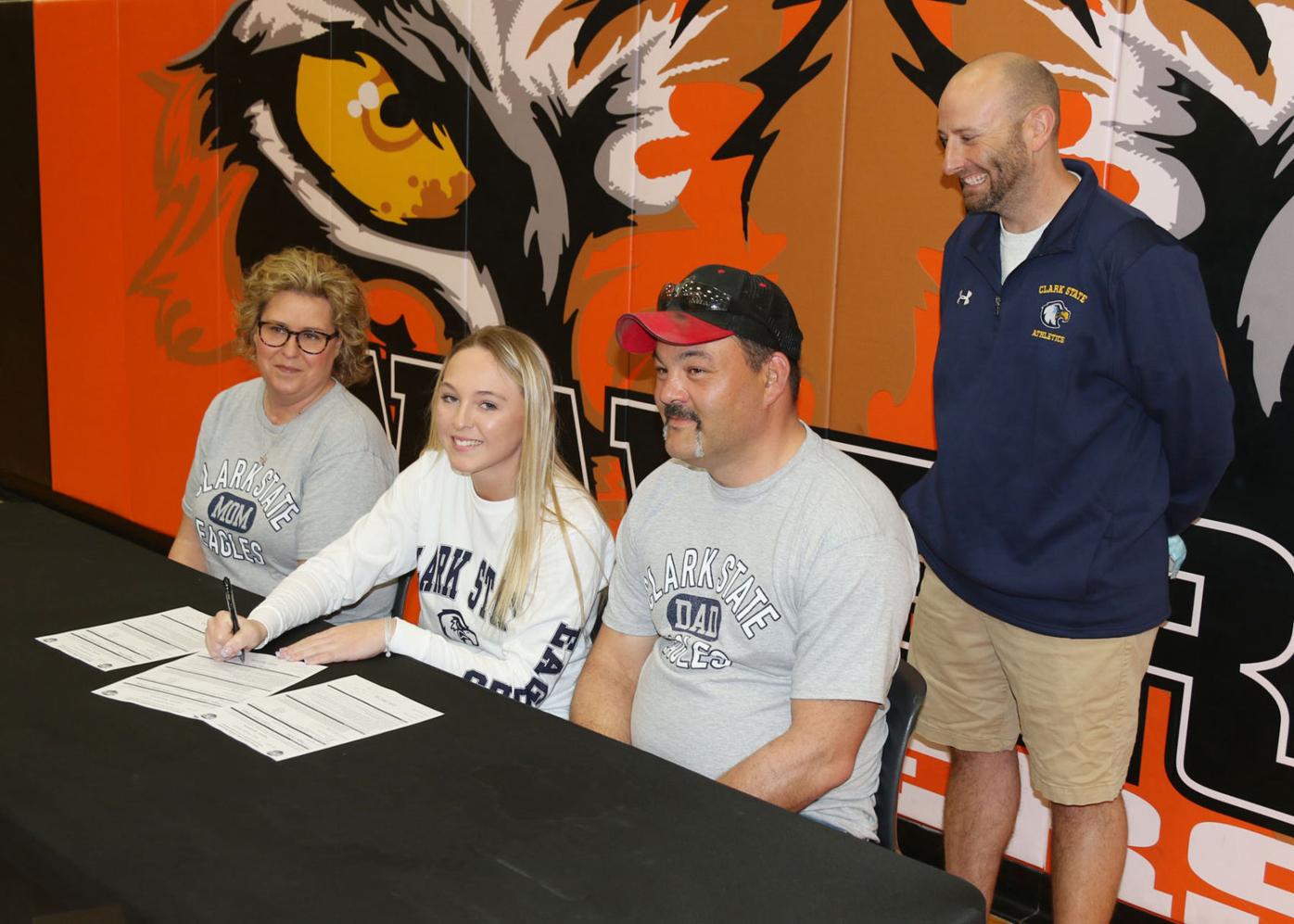 On the day of her signing, Waverly’s Paige Carter is seen sitting between her parents Beth and Bobby Carter while she puts the pen to paper. Standing behind her smiling is Clark State Women’s Basketball Coach Corey Steinke. 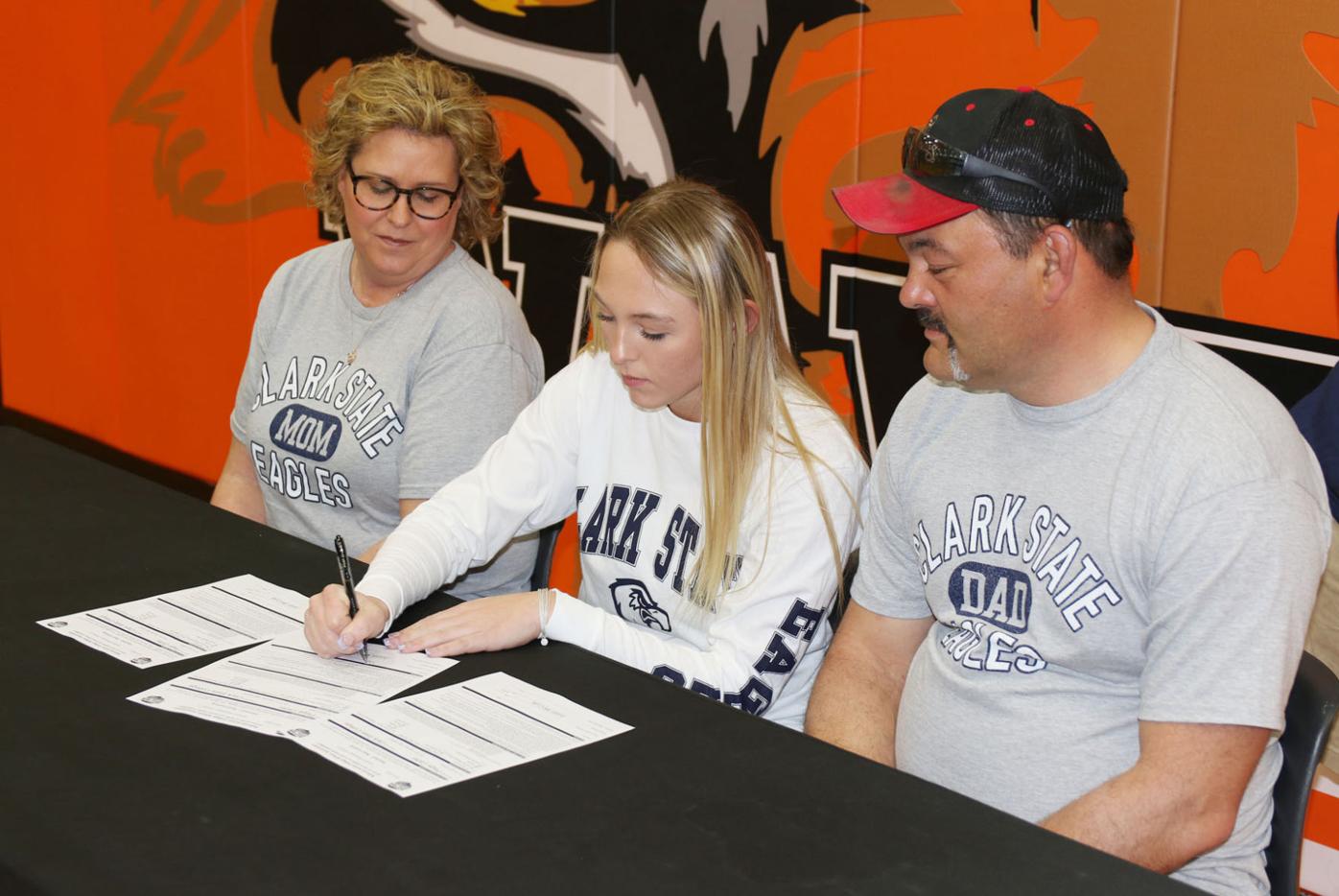 With parents Beth and Bobby Carter watching, Paige Carter makes her signing with Clark State official. She will be playing basketball for the Lady Eagles.

The ability to spin and shoot with either hand, as well as jump and rebound, allowed Waverly’s Paige Carter to score more than 1,000 points in high school and pull down close to 800 rebounds. She is shown her spinning around and out-jumping a taller Jackson defender in the sectional game for a left-handed shot.

On the day of her signing, Waverly’s Paige Carter is seen sitting between her parents Beth and Bobby Carter while she puts the pen to paper. Standing behind her smiling is Clark State Women’s Basketball Coach Corey Steinke.

With parents Beth and Bobby Carter watching, Paige Carter makes her signing with Clark State official. She will be playing basketball for the Lady Eagles.

As a basketball-only player throughout her high school career, Waverly senior Paige Carter had a goal of continuing to play after graduation. Now she will have that chance, after signing with Clark State College in Springfield where she will continue the sport she loves for the Lady Eagles.

Clark State is a junior college, and official member of the National Junior College Athletic Association (NJCAA), which means student-athletes can transfer to any college and play after two years of being in the program.

Corey Steinke, the women’s basketball coach for Clark State, is beginning his first year as a college coach after guiding high school teams nearby for the past 11 years, most recently at Bethel. Steinke is excited about landing Carter, an Honorable Mention All-Ohioan in Division II.

“My athletic director, Justin McCulla, told me about Paige. The coaches before me had recruited Paige and said they were going to come to sign her. I watched the film and said we absolutely want her,” said Steinke, who noted that Carter will bring athleticism, leadership and physical guard play to his team.

“Even though Paige played in the post here (at Waverly), she has the talent to play (positions) one through four, which is great. With her physicality, she will bang with anyone. Having 700-some rebounds in high school for what I would consider a guard in college is amazing. She can shoot the ball. I’m glad we signed Paige. She’s exciting.”

Another connection Carter has is through her friend, Macie Graves of Southeastern High School, who had already committed to Clark State.

“Paige and Macie are going to room together. It is nice to have someone she knows there to room with her,” said Steinke, who noted his wife will also be helping with the program.

“Being new to Clark State, I’m excited to get started. I’ve been around the area for 20 years. I’ve seen the program grow and have its ups and downs. My wife is in college there. She’s a physical therapist, but she decided to go back and change careers. I told my wife that we are going to coach and take classes there. It will be nice to have my wife helping me. So, if the girls ever need her, my wife will be there.”

Carter is glad that she will be rooming with her AAU teammate and friend Macie Graves. They have played five years together on teams named Swish and First Capital Flames.

“After seeing films, they asked me to come for a visit,” said Carter. “I knew automatically I wanted to go there. I love the campus and that it was a little school and not too far away, about an hour and a half. I love the coach. It is a really good fit for me.”

Carter plans to major in education and play her two years at Clark State. Then she will transfer somewhere else to finish school and possibly continue playing if the opportunity is available.

“I know college basketball will be a totally different atmosphere. I won’t be a post any more, because I’m not tall enough. I will probably end up playing a wing or somewhere else,” said Carter. “I want to thank my high school coach, John Bonifield, because without him I couldn’t have done any of this.”

Carter, a 5-8 senior forward for the Lady Tigers, averaged 11.5 ppg, 8.4 rpg, 2.0 spg. She scored her 1,000th career point in the sectional final game, which was played on Friday, Feb. 19. The Lady Tigers defeated Jackson in that Division II sectional title bout, 53-38, to win the program’s first sectional crown in 21 years.

“Clark State is getting a player who scored over 1000 points and grabbed almost 800 rebounds for us. Paige plays hard, has a relentless work ethic and is somebody who always gets after it, no matter what the score or situation is,” said Waverly coach John Bonifield.

“As a college coach, I would be excited to get her. She’s 5-7 and plays like she’s 6-0. Paige won’t back down against a challenge. She hit big shot after big shot. She hit a big shot against Oak Hill to win the ball game. Paige had a big shot against South Webster to tie it and send it to overtime. Paige is not afraid of challenges and stepping up and meeting the situation.”

Bonifield will miss his senior group of four players, which includes Carter, Zoiee Smith, Carli Knight and Michaela Rhoads. Smith will be playing basketball at Rio Grande, while Rhoads will be playing soccer at Brescia University, Kentucky. Knight had offers, but she has decided to just focus on being a student.

“I’m happy for Paige. I’ve known this group since they’ve been in third grade. I know how hard they have worked and how competitive they are. Two signed to play basketball, one signed to play soccer, and one decided not to play,” said Bonifield. “This class meant everything to our program. They finished their four year careers with 52 wins, which is the most since I’ve been coaching. They are great players and great people. They will be missed by all of their coaches and in the classroom.”