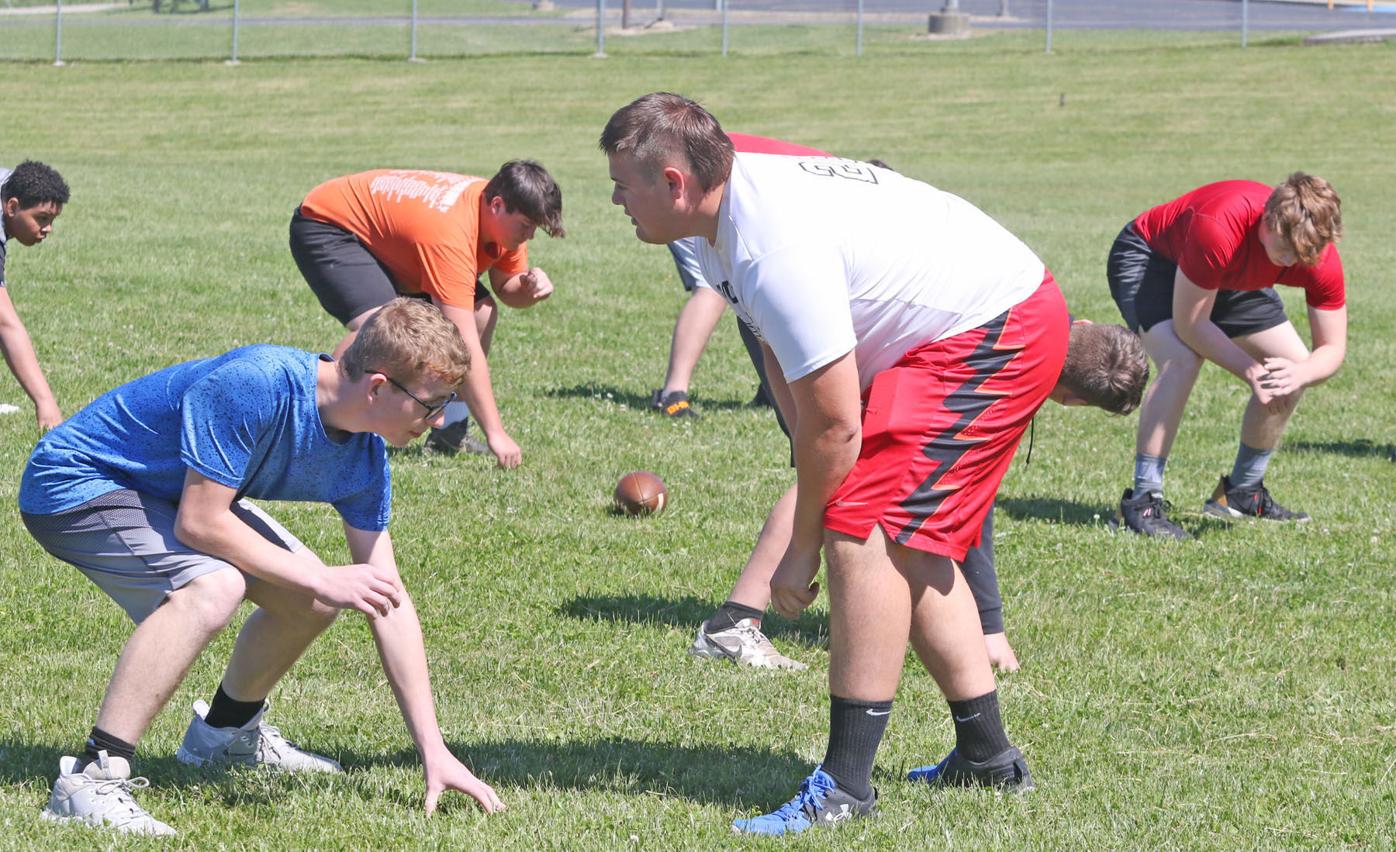 Dalton Tomlison bends down to give the Eastern offensive linemen some pointers and coaching about their stance during an informal workout in early June. Tomlison was helping with Eastern football instruction during his time away from UMass due to the COVID-19 shutdown. 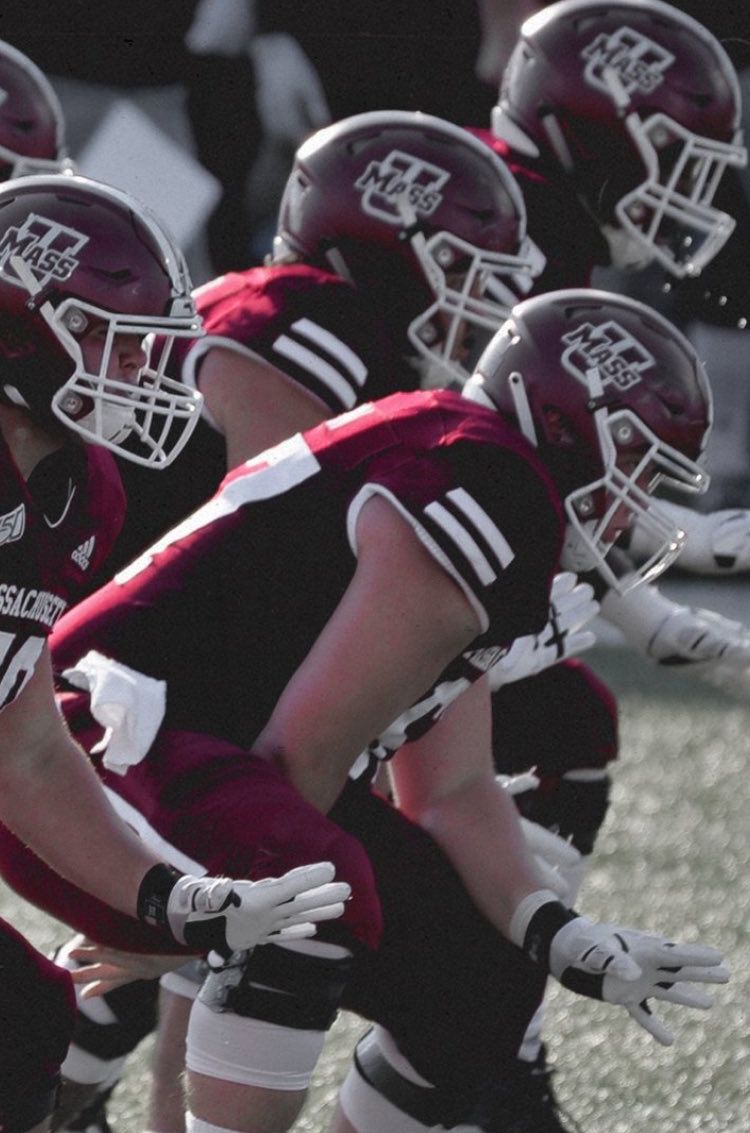 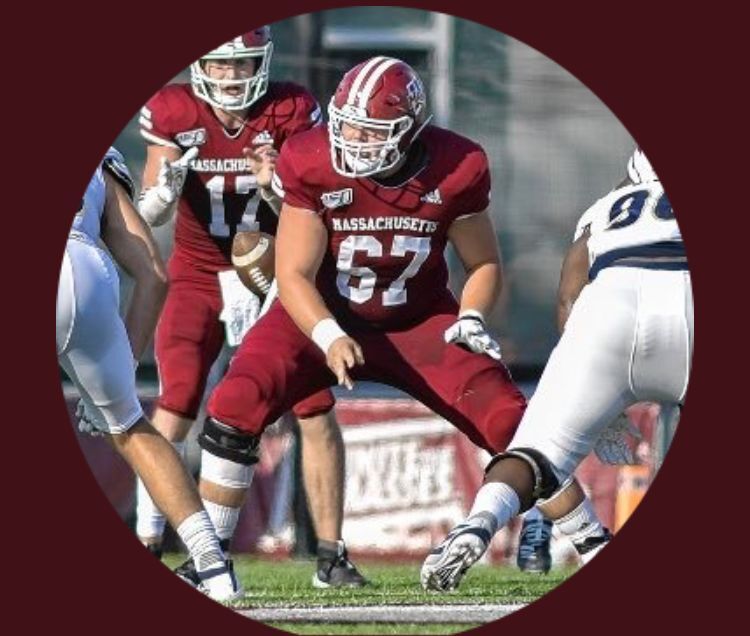 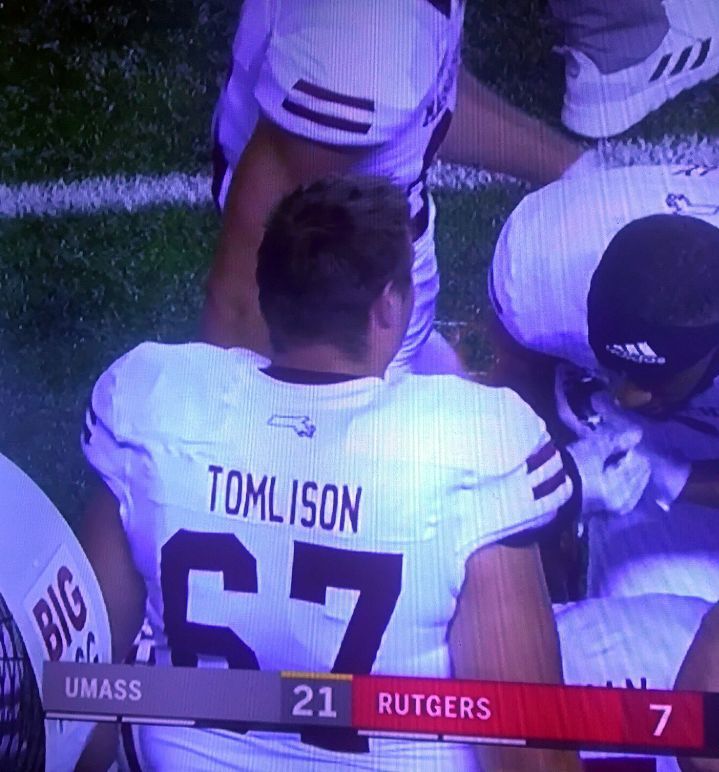 Dalton Tomlison is visibly seen on the sideline during the nationally televised broadcast of UMass and Rutgers in 2019. 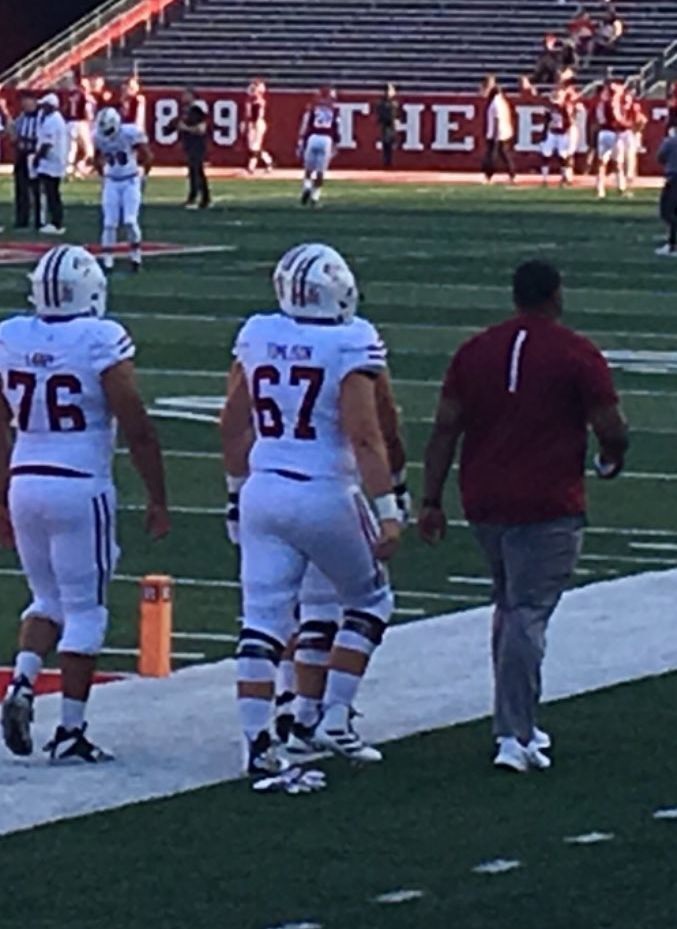 Dalton Tomlison walks onto the field at Rutgers for his first Division I college football game. 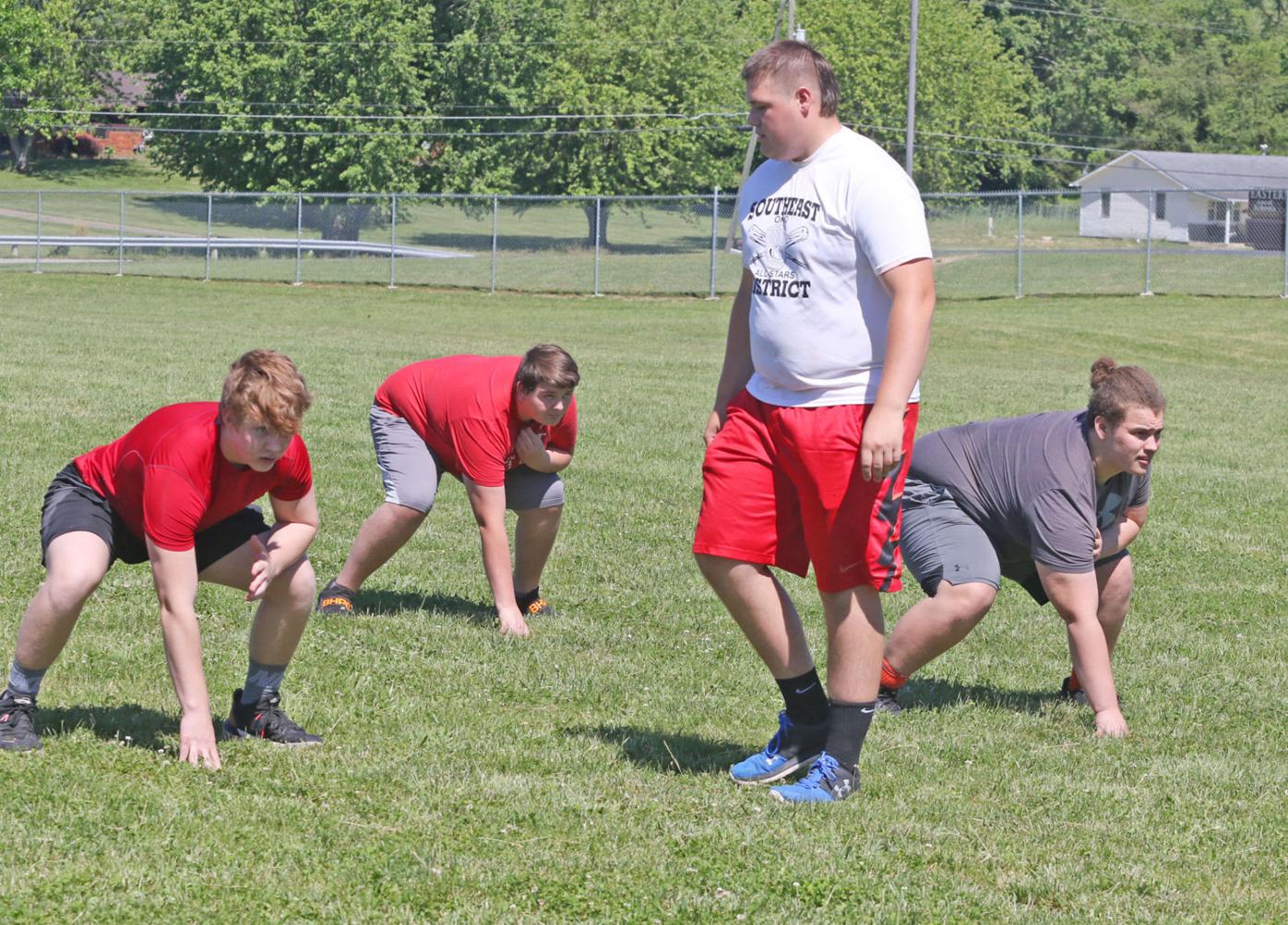 Dalton Tomlison walks through socially distanced Eastern linemen while instructing them during a June conditioning session. 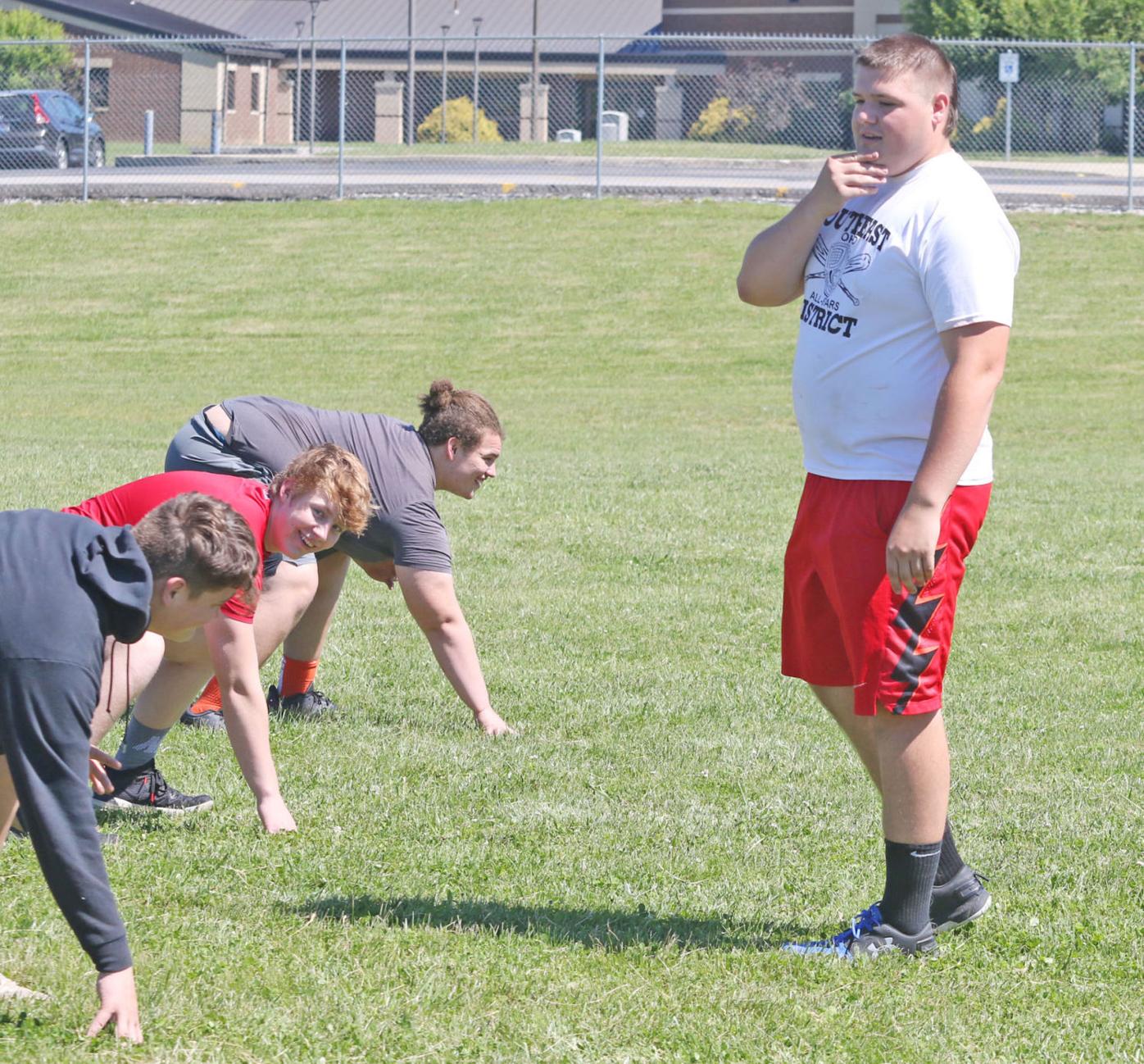 Dalton Tomlison bends down to give the Eastern offensive linemen some pointers and coaching about their stance during an informal workout in early June. Tomlison was helping with Eastern football instruction during his time away from UMass due to the COVID-19 shutdown.

Dalton Tomlison is visibly seen on the sideline during the nationally televised broadcast of UMass and Rutgers in 2019.

Dalton Tomlison walks onto the field at Rutgers for his first Division I college football game.

Dalton Tomlison walks through socially distanced Eastern linemen while instructing them during a June conditioning session.

In his first year as a student and Division I college football player at the University of Massachusetts, Eastern graduate Dalton Tomlison found himself thrust into a new role.

A staple on the offensive line throughout his football career as a guard at Eastern and his one year of junior college at Iowa Western, Tomlison made the shift to center at UMass, filling a need for the Minutemen while securing a starting role. Overall, 2019 was a rough season for the UMass football team (1-11), but a good season for Tomlison personally.

Tomlison, a three-star JUCO recruit who played his freshman year at Iowa Western, entered UMass camp during the summer of 2019 as a sophomore aiming to claim a starting role on the offensive line as a guard. He was in good favor and looking to win a guard spot on the line, but he eventually lost the starting bid and began his UMass career as a back-up. However, an injury to the starting center saw Tomlison find his opportunity, taking the starting role and never relinquishing it, until he suffered a knee injury.

Tomlison’s first start came against Coastal Carolina following an injury to Jaylen Larry, who started at center for the first three games of the year. He followed with five more starts at center, including Akron, FIU, Louisiana Tech, UConn, and Liberty. He was also one of six Minutemen who made their first starts in 2019. In all, Tomlison played in the first nine games of the season.

“I learned a lot. I didn’t start the first three games. I came in and got some late playing time. After the third game of the season, I got the starting job as the center,” said Tomlison. “I took it and ran with it. I started six straight games. Then I tore my MCL in practice. I played through it during the Liberty (University) game. That wasn’t the best decision I ever made. That decision made my knee worse, so I had to sit out the Army, Northwestern and BYU games at the end of the season.”

Fortunately, the knee didn’t require surgery. At the time of the interview, Tomlison said he was feeling great.

“I feel back to normal now. It took a few months,” he said. “I went through a lot of physical therapy with the training staff.”

Since he was primarly a guard, Tomlison said there was a little bit of a learning curve with playing center.

“I played guard here at Eastern, and I was a guard in junior college. I came into UMass as a guard. It was a huge change for me to go to center. I worked all through fall camp as a guard and played the first three games as a guard,” said Tomlison.

“When the first center went down, I was thinking I hadn’t played center since junior high and a couple reps in high school. I thought it was a really good chance for me to take over the starting job. I asked the offensive line coach to put me in there and see what I could do. I did fairly well, and I was the next best center up.”

To keep his spot at center and be successful, Tomlison had a lot of work to do.

“It was a big change for me having to snap and step. Coming in as the new guy who didn’t know the offense that well, I had to do a lot of film study. It was a fast learning process,” said Tomlison.

“As a center, you call the defenses out. You call the blitzes out. You are basically the leader of the offensive line on the field. It was hard to really bond with a single quarterback, because we flipped four quarterbacks. They started one guy for two games. We were losing, so they gave another guy a chance. That meant I didn’t get a bond like I would like with the quarterbacks. But this year, hopefully we will have one starting quarterback.”

And even though the team wasn’t successful record-wise, Tomlison learned what he needed to do to take another step forward.

“I played a lot of good competition like Rutgers and Louisiana Tech. There were a lot of good defensive linemen that I blocked,” said Tomlison. “Being only a sophomore, it made me realize that I need to get stronger and quicker to be able to dominate these guys like I want to dominate.”

Since the 2019 Minutemen team was so young and under a new coaching staff, Tomlison is hopeful that 2020 will be a better year, so long as the players get to have a season.

“I really feel like we are an up and coming team. Everyone on the offensive line is coming back. We only lost two defensive backs and a wide receiver,” said Tomlison. “I expect us to be a lot better this year.”

There was no opportunity for the team to work in the spring or have a spring game. They were sent home in March due to COVID-19.

“It has been rough. It really has. I have to give a shoutout to the Myers family for letting me use their weight room in the basement during this time. That has helped me a lot. With all of the gyms closed down (during the early months of the pandemic), that was a life saver,” said Tomlison.

“It isn’t the same as being with your team and having the same strength and conditioning program, but I am looking at coming back to school in shape and ready to hopefully hit the ground running. For them (the Myers family) to have the weight room at home and let me use it every day has been so helpful.”

In June, Tomlison was at Eastern High School, helping his father, Scott, take the Eagles through conditioning and reps as they prepared for their 2020 season.

“We would have started our summer workouts at UMass. We would be getting ready to put our offenses in,” said Tomlison.

“Instead, we are using Zoom meetings. I have to get on Zoom every day at 10:30 a.m. during the week. We are installing offenses the best we can right now. Hopefully once we return, they are talking about six to eight weeks of practice and then we are off to play Division I football.”

His goal is the same: return and claim a starting role somewhere on the offensive line.

“My expectation is to go back and take my center job back again. If that doesn’t work out, the coaches mentioned moving me back to guard. But I think they are really expecting me to come in at center,” said Tomlison during the interview in June.

“That also hurts right now. Instead of snapping with my little brother in the yard, I should be snapping with the starting quarterback and getting the playing bond that we should have.”

Since the time of the interview, Tomlison has returned to UMass, which has a full 2020 schedule currently listed on its website, beginning with a Thursday, Sept. 3 game against UConn.

“Being a Division I college football player is everything I dreamed of. I have goals of being an All-Independent Center and hopefully by my senior year becoming an All-American.”