Eastern senior Chloe Dixon’ (11) goes for a kill attempt over the outstretched arms of Western junior Sakayla Beckett (22). Eastern players behind Dixon include Megan Nickell (3), Addison Cochenour (20), Tinlie Riley (15) and Skylar White (9). Western players behind Beckett include Mea Henderson (13) and Paige Davis (15). Check out a photo gallery from the match at newswatchman.com. 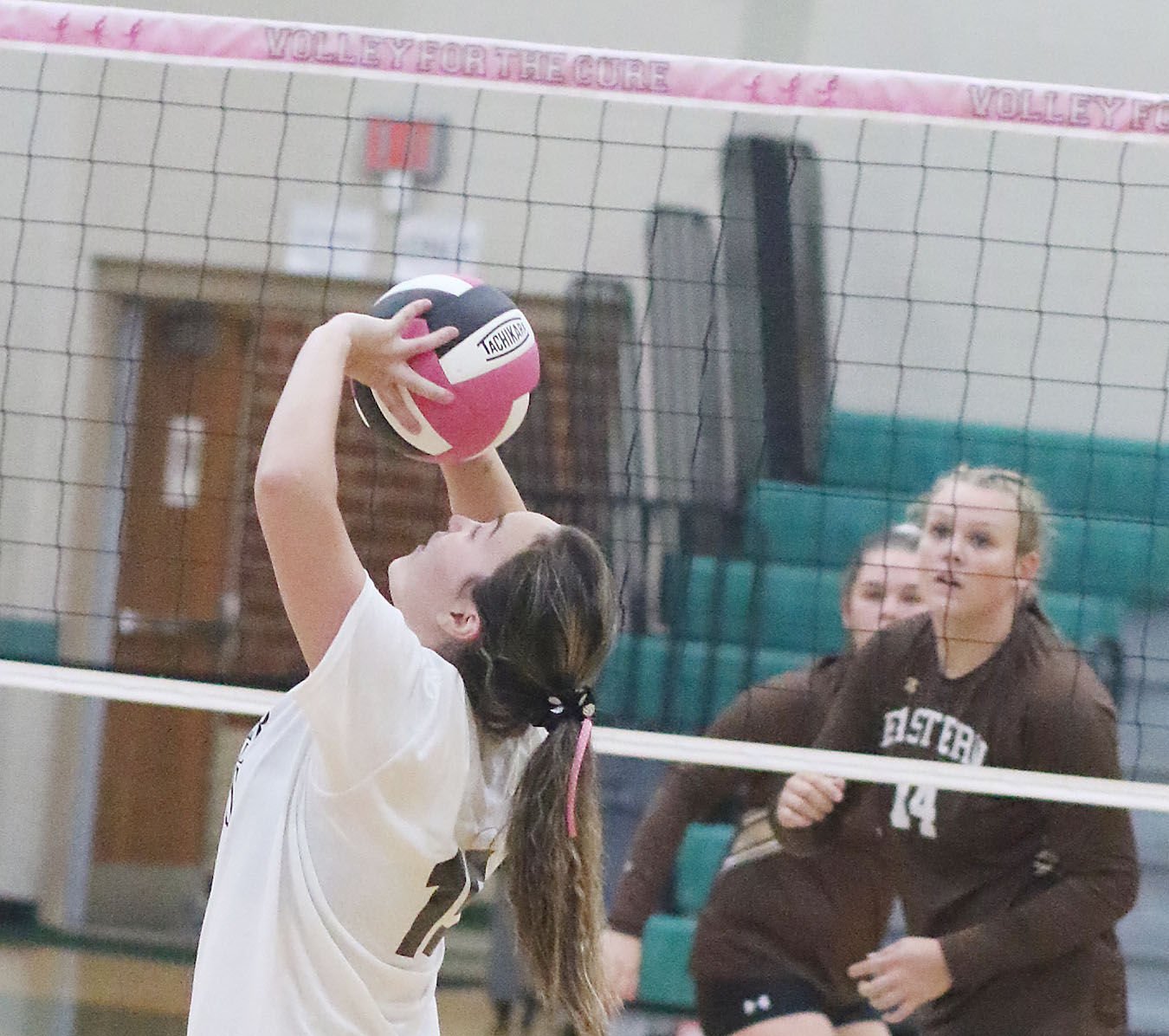 Western senior Paige Davis sets the ball up for a teammate as Eastern seniors Andee Lester and Skylar White watch from across the net. 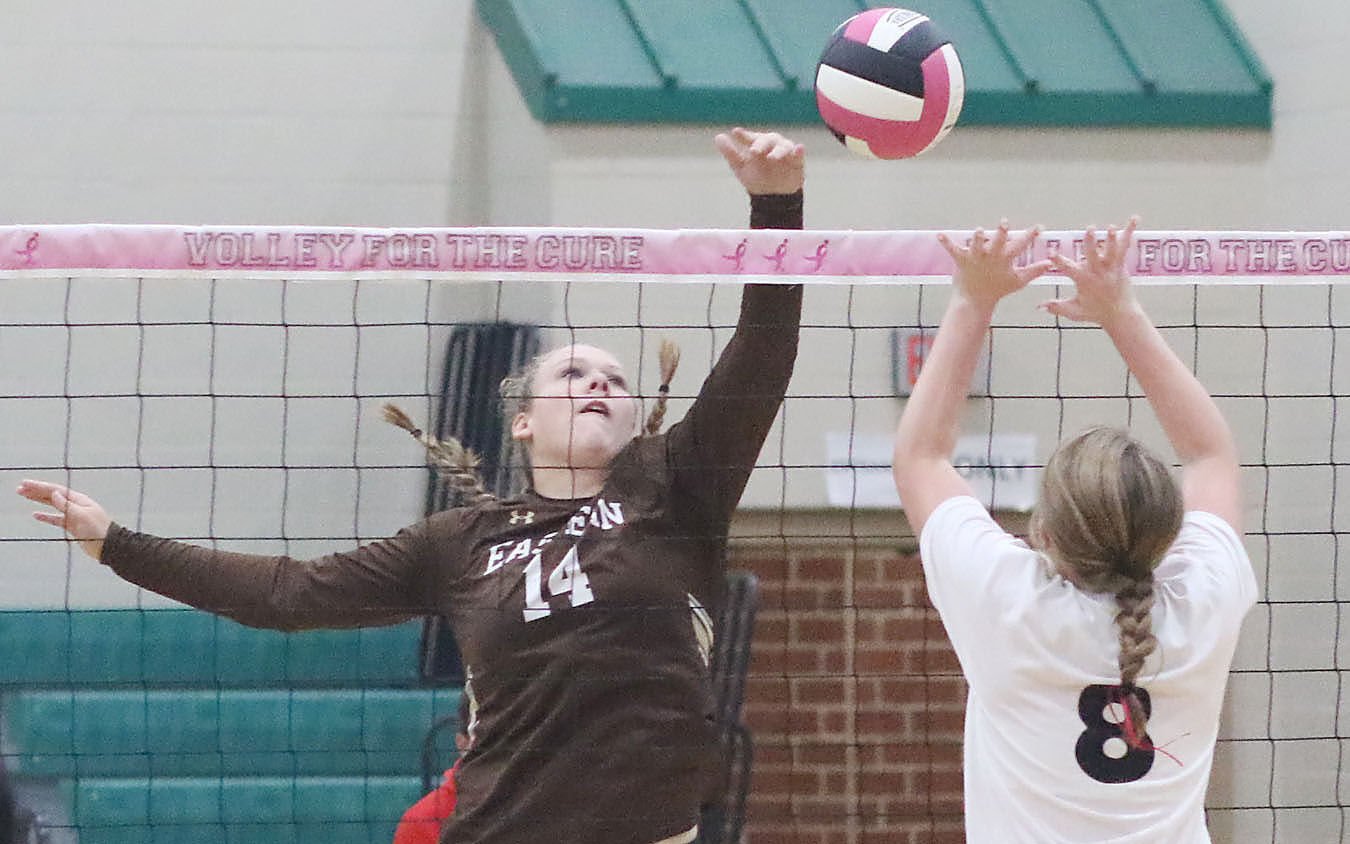 Eastern senior Andee Lester pushes the ball over the net as Western junior Alyssa Marhoover goes for the block. 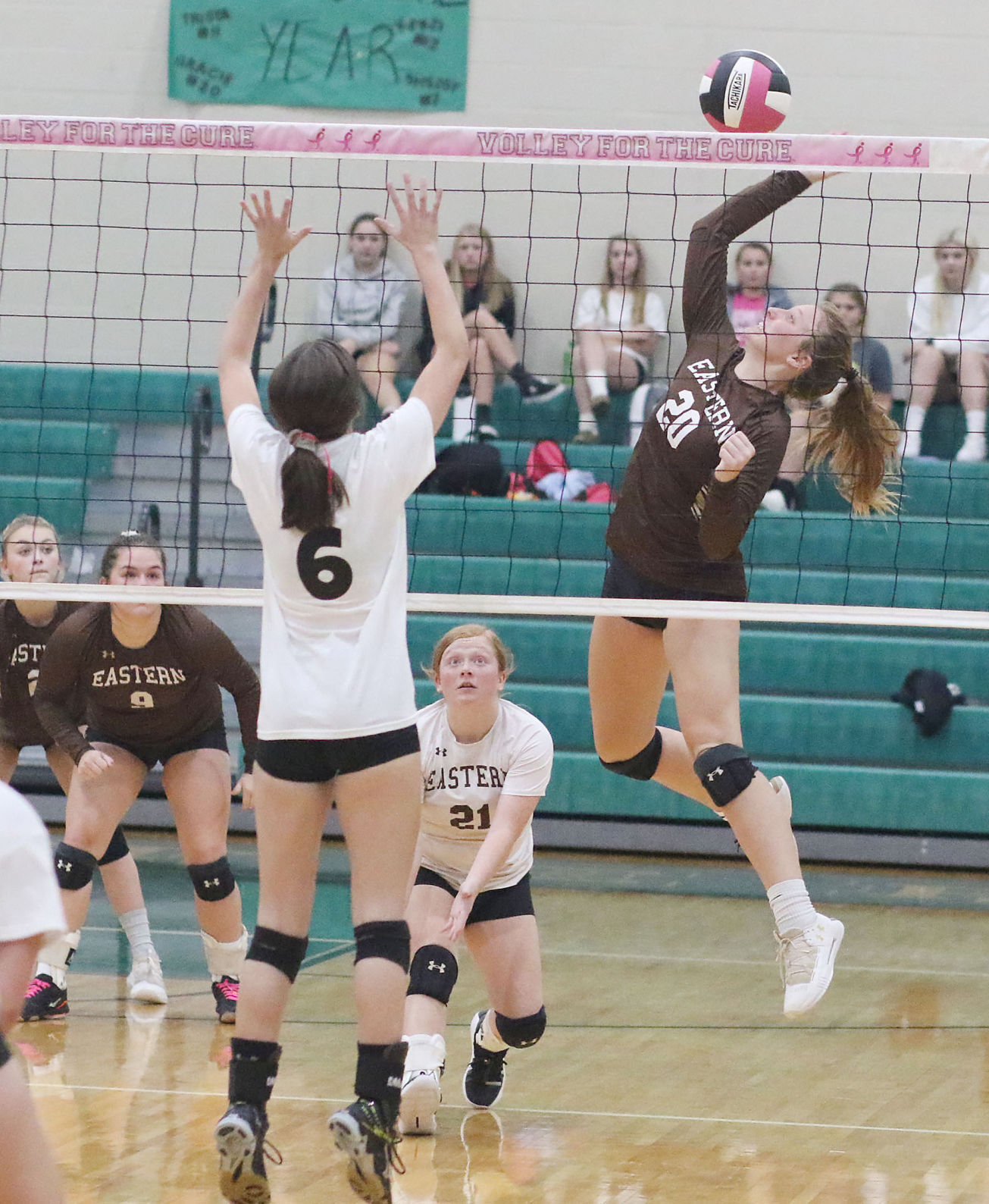 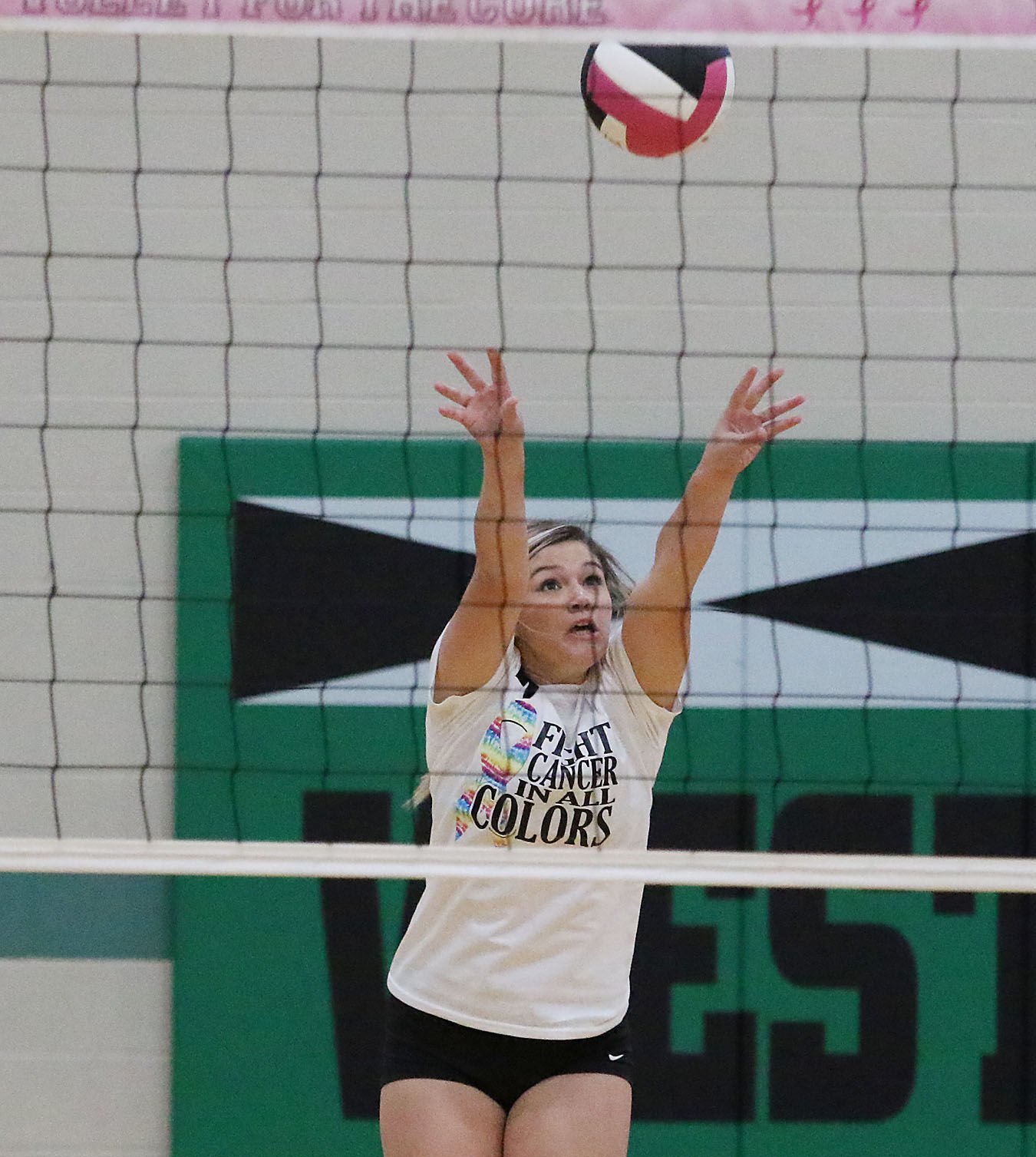 Western’s Mea Henderson sends the ball forward with a set.

Eastern senior Chloe Dixon’ (11) goes for a kill attempt over the outstretched arms of Western junior Sakayla Beckett (22). Eastern players behind Dixon include Megan Nickell (3), Addison Cochenour (20), Tinlie Riley (15) and Skylar White (9). Western players behind Beckett include Mea Henderson (13) and Paige Davis (15). Check out a photo gallery from the match at newswatchman.com.

Western senior Paige Davis sets the ball up for a teammate as Eastern seniors Andee Lester and Skylar White watch from across the net.

Eastern senior Andee Lester pushes the ball over the net as Western junior Alyssa Marhoover goes for the block.

Western’s Mea Henderson sends the ball forward with a set.

In a varsity battle between in-county rivals Western and Eastern Monday evening, the victory came down to the final two points in the fifth and final set.

“I couldn’t find anything on Volley For the Cure about it being set up this year. I know most schools aren’t allowed to do it because of the crowd size and social distancing,” said Western coach Jenny Wheeler.

“We wanted to keep this season as normal as possible. I remember seeing a school do an event for all cancers. I thought about going to all cancers last year, but where it was my first year coaching, I didn’t want to switch it up too much. This year seemed like the perfect year because we couldn’t find anything with Susan G. Komen, and everything was such a mess because of COVID.”

The money raised at the match will go to a Western staff member who just was diagnosed with breast cancer, Dee Dee Leeth. According to Wheeler, Monday was Leeth’s first day off as she prepares to fight the battle with cancer.

To start Monday’s match, the two teams battled through several ties in the opening set before Western began to move ahead, following a pair of kills from Chloe Beekman and two served aces from Mea Henderson, 10-5.

The Lady Eagles cut back into that lead with Addison Cochenour providing a pair of aces before tying it when libero Reileigh Potts followed in the rotation, 12-12. Several long volleys followed before serving runs from Chloe’ Dixon, Andee Lester and Brodie Beavers gave the Lady Eagles the opening set, 25-18.

Early in the second set, the Lady Indians took the edge, 5-3, and never trailed again despite the Lady Eagles keeping it close. Western stretched the lead behind short serving runs from Alyssa Marhoover and Paige Davis, going up 15-7.

Back-to-back kills from Eastern’s Andee Lester and Addison Cochenour trimmed the Western advantage briefly. A short serving sequence from Brodie Beavers followed, getting Eastern within three, 17-14. Western took the next point, and Mea Henderson followed with her longest serving run of the night. Henderson delivered six straight, including three aces to put Western one point away from taking the set, 24-14.

However, Eastern’s Addison Cochenour won the next point with a tip and began serving for the Lady Eagles. Then Chloe’ Dixon and Skylar White made plays at the net for more Eastern points. A deep Western kill that sailed out of bounds, followed by an ace serve from Cochenour had the Lady Eagles back within five points, 24-19. But the Lady Indians took the next point to win the set 25-19 and even the match at 1-1.

In the third set, the teams tied at 1, 3, 4, 5, 6, and 9. Then Eastern’s Andee Lester delivered a block, giving the serve to Chloe’ Dixon, who served another point to put the Lady Eagles ahead 11-9. After the two teams traded points, Eastern added to its lead with short serving runs from Skylar White and Andee Lester, eventually pushing up to a 17-12 advantage.

Eastern moved the lead up to 19-15 as freshman Megan Nickell came up in the rotation. Nickell served four straight, including a pair of aces to push the margin to 24-15. The Lady Indians took the next two points before a tip from Lady Eagles finished the set, 25-17.

With Eastern up 2-1 in sets, the Lady Indians fought to make their comeback. On an early 3-3 tie, Western’s Kenzi Ferneau delivered a kill that gave Alyssa Marhoover the opportunity to serve three straight points. From that point on, Western was able to maintain a one- to three-point advantage until Eastern rallied late to tie the set at 20-20. Ferneau provided a tip to put her team in front and added a service point to give WHS the 22-20 edge.

Eastern wasn’t finished fighting. Addison Cochenour had a tip of her own, getting the serve to Lester who added two more points to give the Lady Eagles their first lead, 23-22, since very early in the set. Western’s Sakayla Beckett provided a block before Alyssa Marhoover served an ace, putting the Lady Indians up 24-23. Eastern ran a quick hitter with Skylar White setting up Cochenour for a kill for the 24-24 tie. The teams tied again at 25 before Western was able to take advantage and win 27-25.

The fifth and final set (played to 15, but must be won by two points) began with a crazy sequence on a volley with Eastern taking the point to start in front. Skylar White served the next thee points for the Lady Eagles, putting them up 4-0. Western broke through for a point, only to see Eastern take the ball back and move up to a 7-1 advantage.

The Lady Indians began their rally as Alyssa Marhoover broke through with a kill. Sakayla Beckett had the next kill, as Marhoover began a serving run with an ace, a well-placed set from senior Paige Davis and a kill from Chloe Beekman. That sequence pulled Western within one, 7-6.

A very long volley followed with Eastern eventually taking the point, 8-6. The set remained close the rest of the way. Western’s Mea Henderson served her team into the lead, adding points on kills from Kenzi Ferneau and Chloe Beekman, 11-9. The Lady Eagles rallied back, tying it at 12 on a kill from Chloe’ Dixon. The teams tied again at 13, before Eastern’s Skylar White had a kill to make it 14-13 and get her team one point away from taking the match. However, the final three points belonged to the Lady Indians.

Alyssa Marhoover provided a tip for Western to tie the contest for the final time, 14-14. Paige Davis followed with an ace for the Lady Indians, 15-14, before Marhoover won the final point with a block, 16-14, sealing the victory.

“We knew coming into this game that it was going to be tough. Eastern is a really good competitor. But I think it showed how much the girls wanted the game,” said Wheeler. “We were down a couple of times, and we were able to turn ourselves around. We could possibly see Eastern in the tournaments or teams like Eastern. Winning this should give the girls a good boost of confidence.”

Statistically for Western, Kenzi Ferneau led the Lady Indians in kills with 16, followed by Chloe Beekman with 6. Mea Henderson, Paige Davis, Alyssa Marhoover and Sakalya Beckett had 3 kills each. Ferneau was also the team leader in digs with 25. Davis followed with 16 digs, while Marhoover and Beekman had 12 each. Mea Henderson added 11 digs, followed by Brooklyn Leedy, Trista Young, and Beckett with 7 each. Maddie Clay provided 5 digs, while Taylor Grooms had 3. Henderson handed out 13 assists, while Davis had 12. Beekman, Marhoover, Young and Ferneau added 1 each.

“I’m so proud of the girls. I switched some things up mid-game, and they adapted and handled it so well,” said Wheeler. “I’m proud of how far they have come so far this year. We have to play whatever lineup is best in the moment. The girls are finally seeing that. I tell them that volleyball is the most team-oriented sport there is. Not one person can run the whole court.”

Western (7-10, 4-5 SOC I) will close out the final week of the regular season with four matches on four straight days. The Lady Indians head to South Webster Monday and go to Sciotoville East on Tuesday before returning home to face Clay on Wednesday and New Boston on Thursday.

Eastern (6-12, 4-8 SOC II) will take on Waverly at home Monday night and follow with a home match against Wheelersburg Tuesday night. Then on Thursday night, the Lady Eagles will head to Waverly.