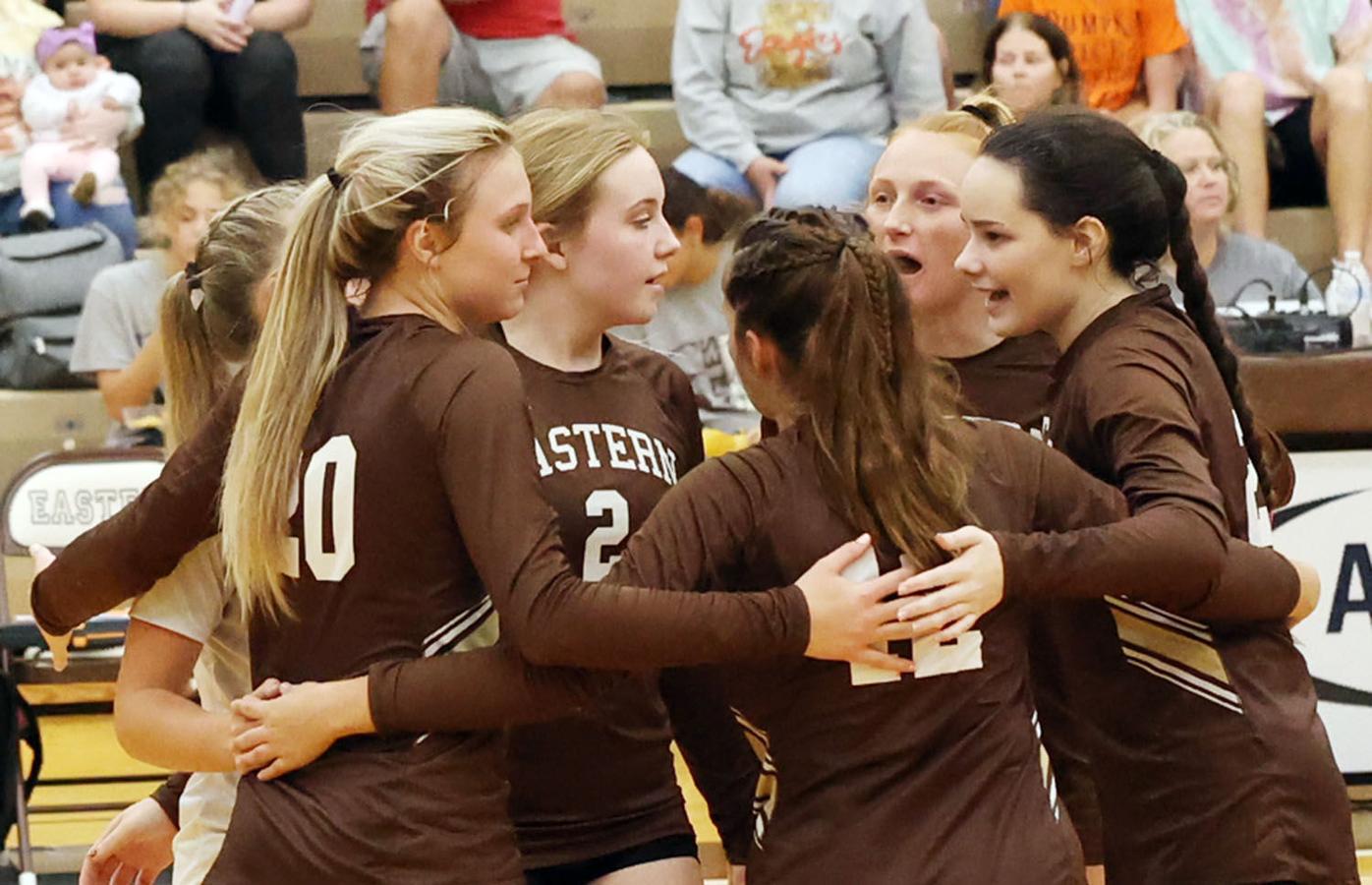 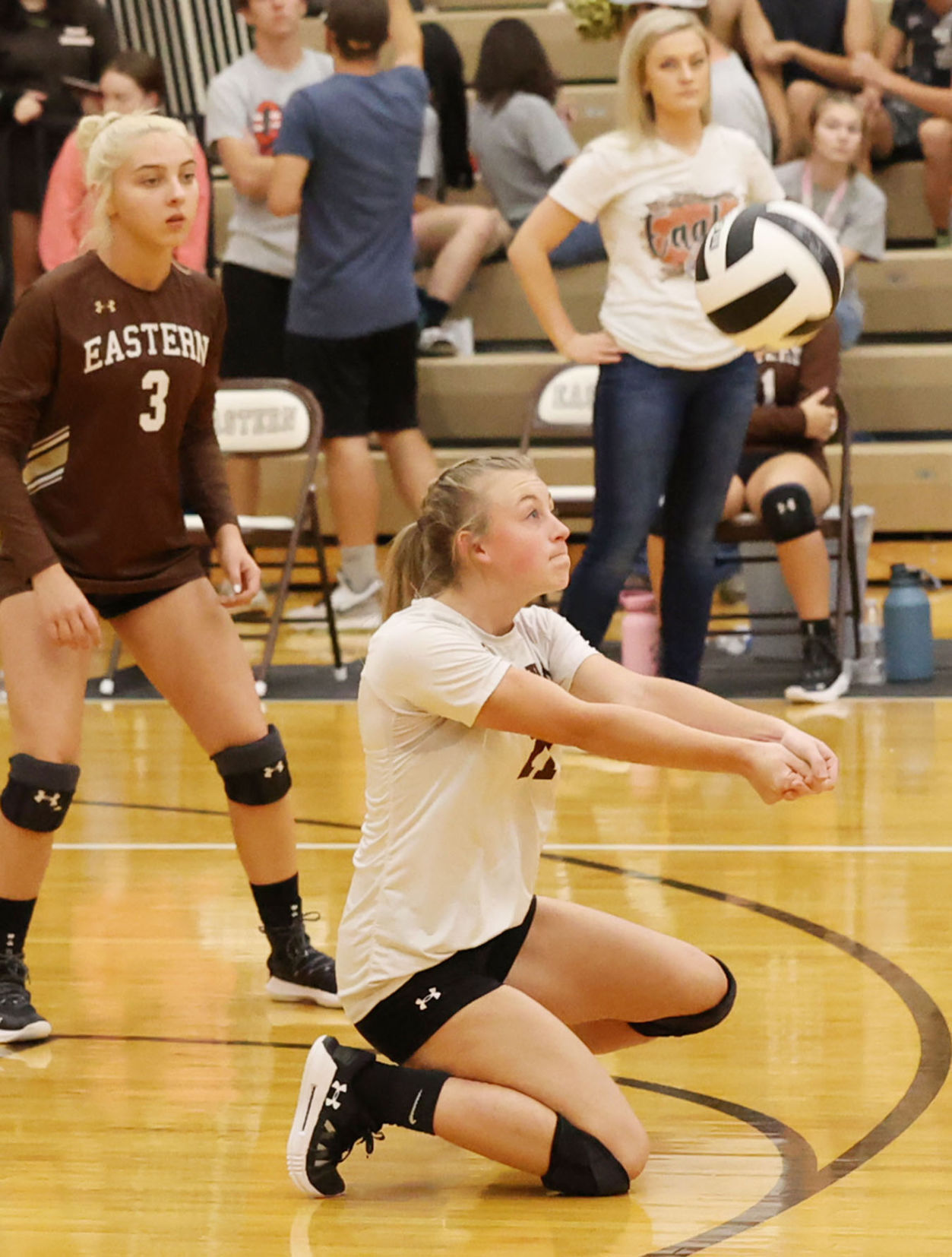 Eastern libero Megan Nickell gets down on her knees for a dig. 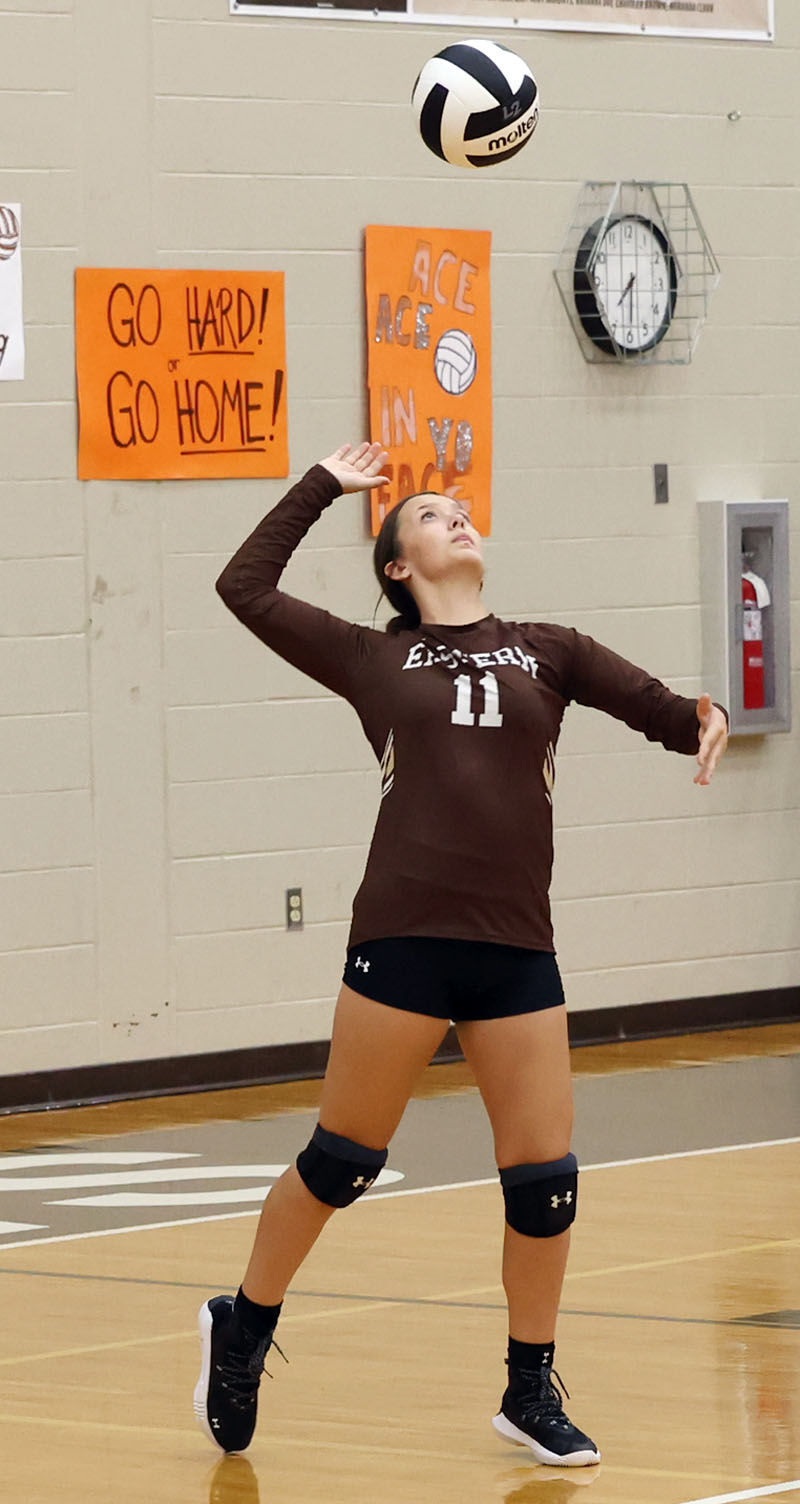 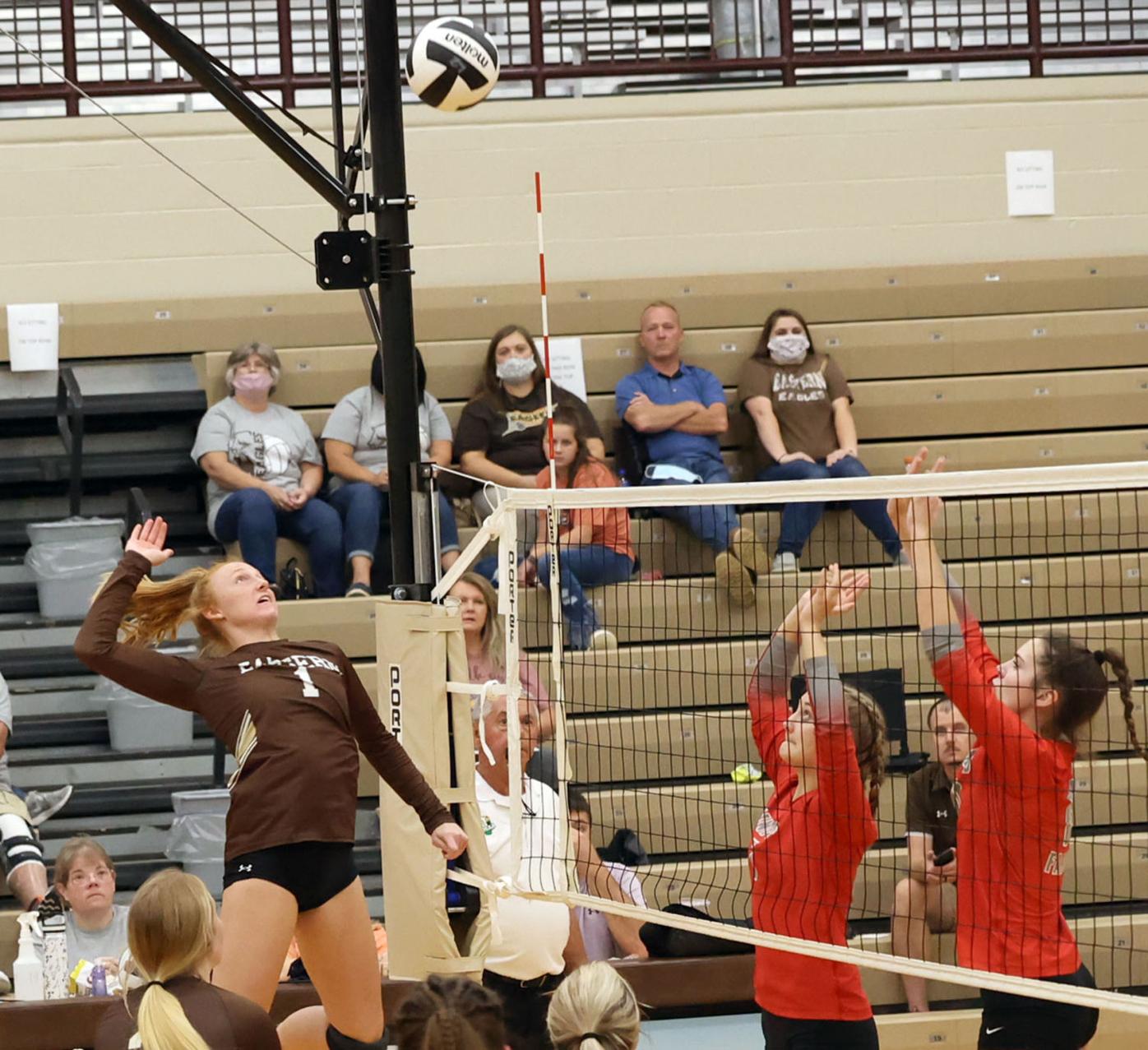 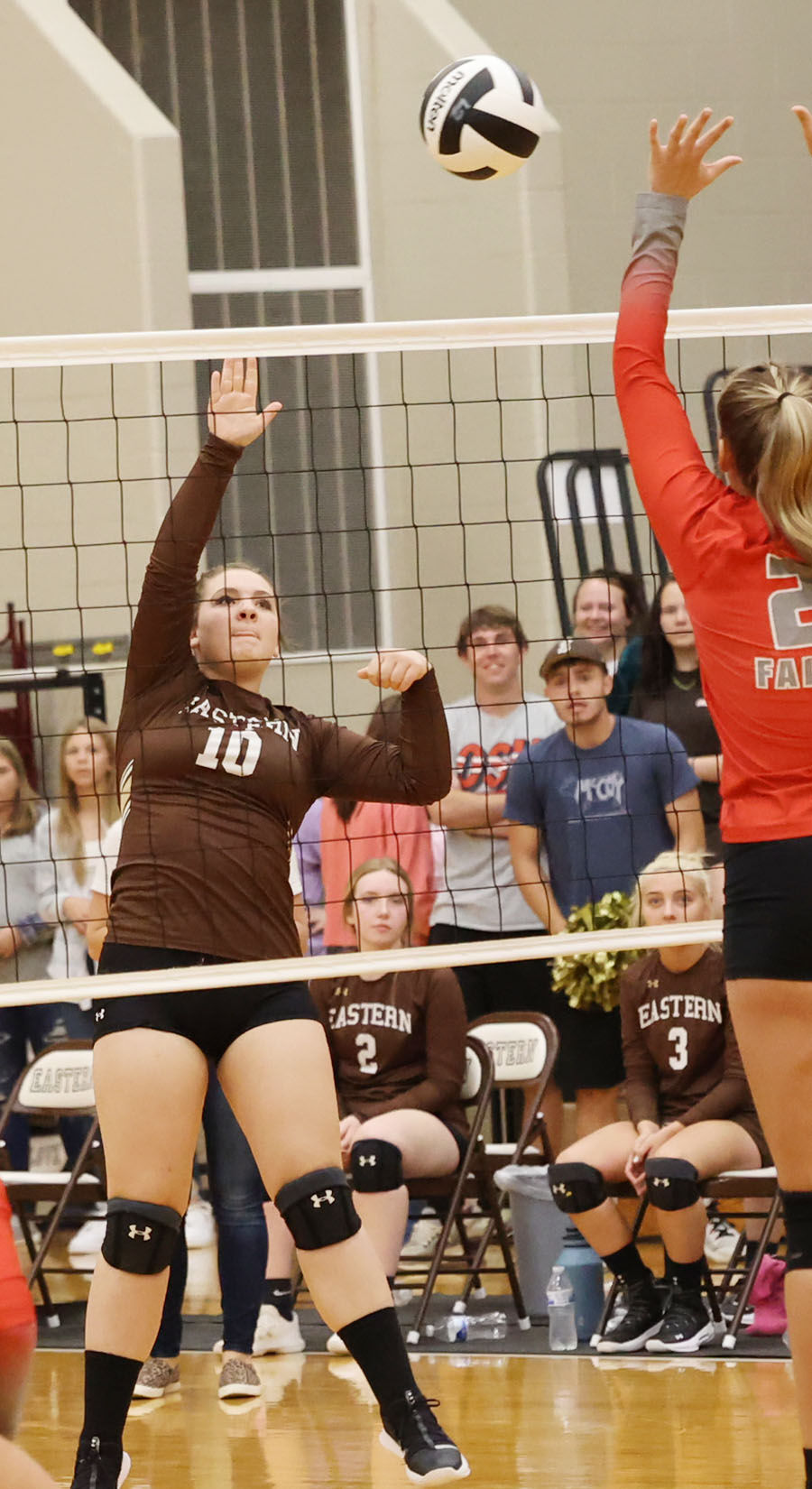 Eastern freshman Gracie Cox goes for the kill over a leaping Minford defender. 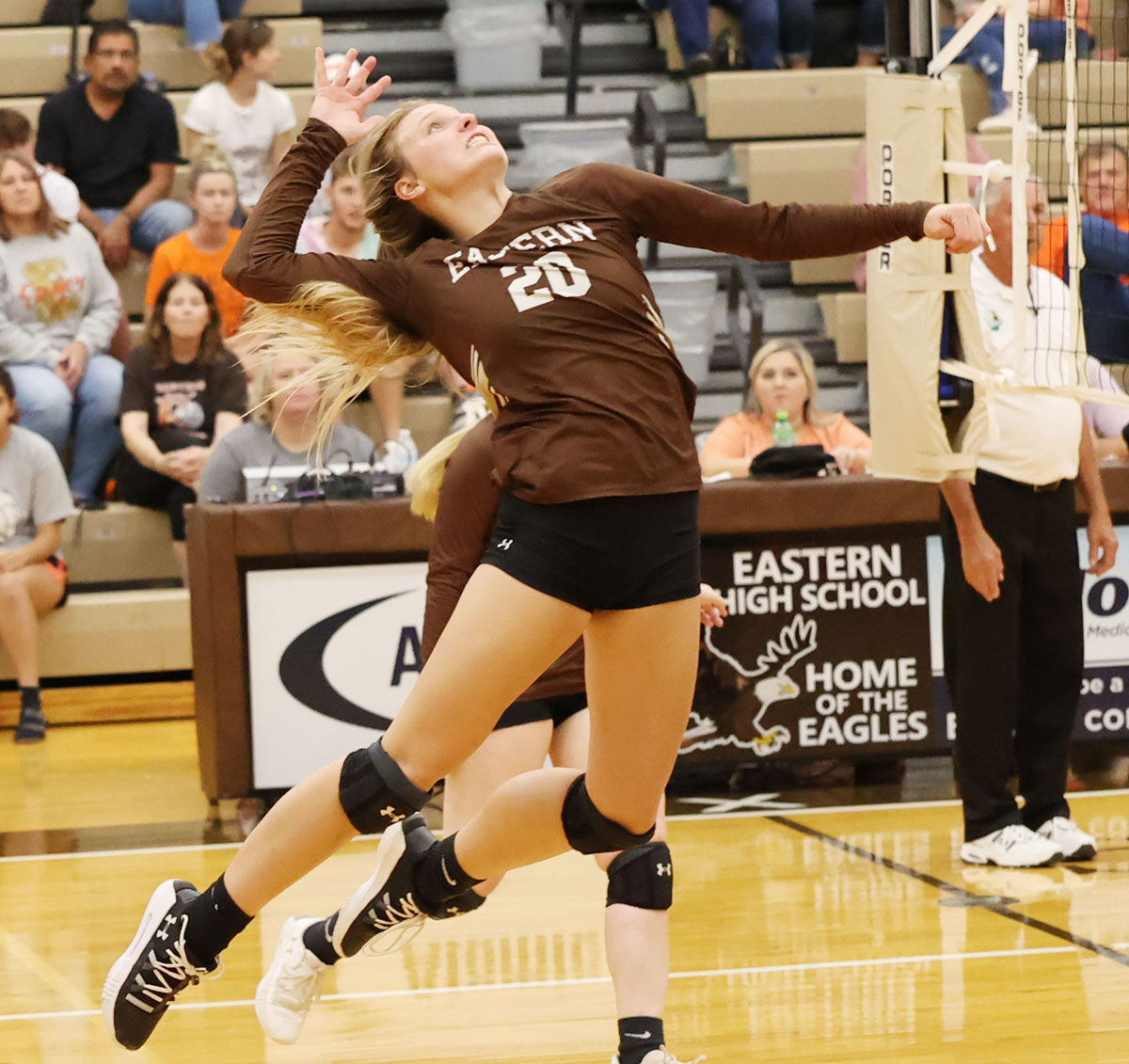 Eastern's Addison Cochenour leaps up from midcourt for a kill in the senior night game versus Minford. 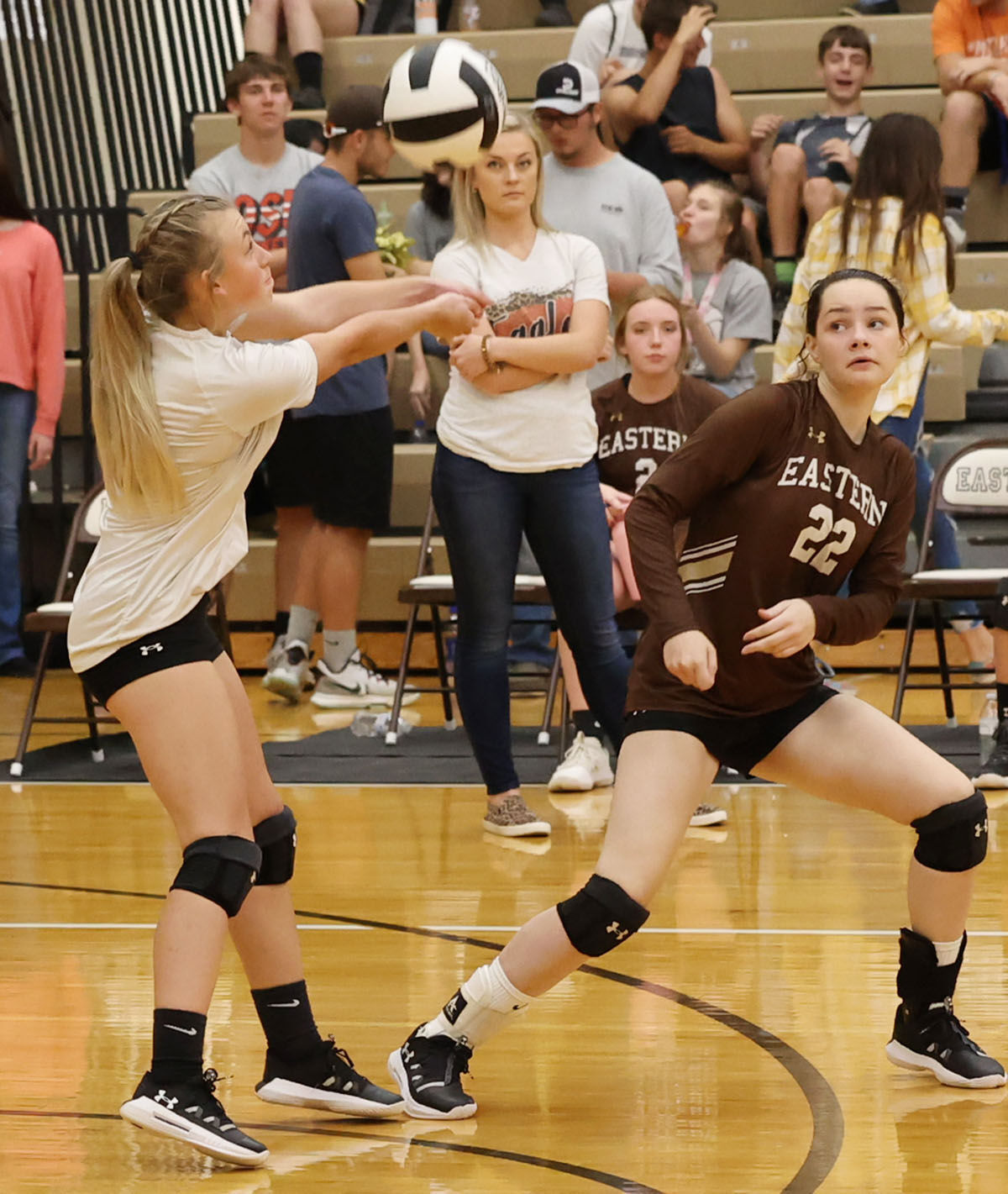 Alexis Clark moves out of the way as teammate Megan Nickell receives the serve from Minford. 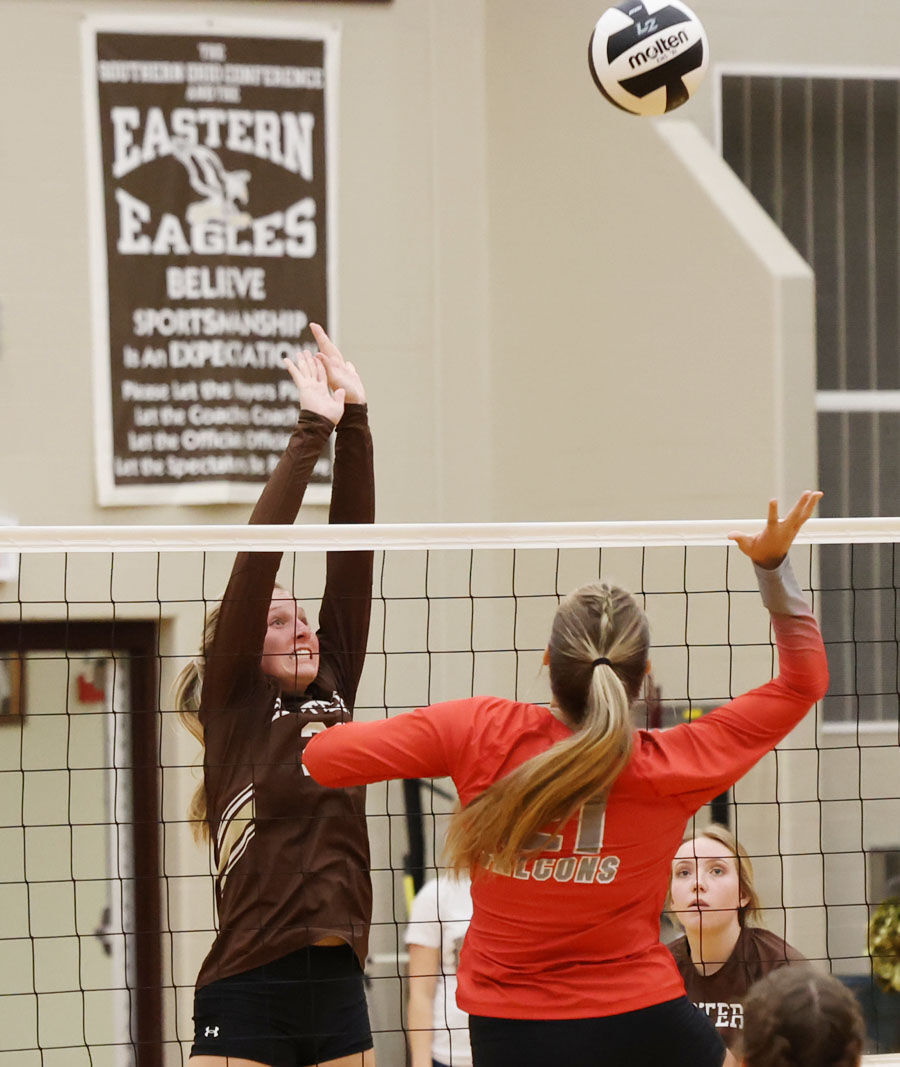 Eastern senior Addison Cochenour goes to the air in an attempt to block a Minford hit.

Eastern libero Megan Nickell gets down on her knees for a dig.

Eastern freshman Gracie Cox goes for the kill over a leaping Minford defender.

Eastern's Addison Cochenour leaps up from midcourt for a kill in the senior night game versus Minford.

Alexis Clark moves out of the way as teammate Megan Nickell receives the serve from Minford.

Eastern senior Addison Cochenour goes to the air in an attempt to block a Minford hit.

Netting a volleyball split with Minford was another step in the right direction for the Eastern Lady Eagles as they closed out the final week of the regular season.

Trailing Minford 11-9 in the opening set, Eastern senior Abby Cochenour delivered three straight ace serves to give her team a one-point lead of 12-11. Minford forced ties at 12, 13, 14 and 15 before moving ahead with a four-point serving run from freshman Brooklyn Pierce to go up 19-15.

The Lady Eagles answered, using a kill from Addison Cochenour to get the ball into the hands of Eastern sophomore Megan Nickell, who fired across three straight points with two more kills from Addison Cochenour. That run brought the set to a 19-19 tie. The two teams tied at 20, 21, and 22. Then Eastern took a 23-22 advantage with a dig from Nickell leading to winning play for Abby Cochenour at the net. However, Eastern couldn’t close out the victory. Minford tied it at 23 and then sophomore Kynedi Davis served the final two points for the 25-23 win.

Starting the second set, Eastern sophomore Kelsey Poorman served the first two points to give her team the early lead. Minford followed with a run to take a 5-3 advantage before Addison Cochenour broke through with a block. However, the Lady Falcons claimed the next point to begin a 5-0 run, staking a 10-4 advantage. Abby Cochenour snapped the streak with a kill for the Lady Eagles. Then Addison Cochenour followed with a serving run of her own.

Addison Cochenour began her serving run with a play that won the first point. On the second, her sister Abby provided a kill after Addison made a crucial dig. Two ace serves and another kill from Abby followed to tie the set at 10. Addison’s next point was the final of her run, giving the Lady Eagles a brief 11-10 lead.

Minford rallied ahead with three points. Then Abby Cochenour broke through with a kill and Maddie Colley tied it with a service point, 13-13. The Lady Falcons flew back with five straight points to go up 18-13. Once again, the Lady Eagles answered, taking the next point to give the serve to Abby Cochenour. She followed with four points, including a pair of aces and another won on a kill from Alexis Clark. That brought the set to an 18-18 tie.

Once Minford regained the lead, Eastern couldn’t break through any more. Back-to-back points with a kill from Addison Cochenour and an ace serve from Poorman pulled the Lady Eagles within one for the final time in the set, 21-20. Then the Lady Falcons claimed the final four points to take the set 25-20.

In the third set, the two teams tied at 1, 2, 3 and 4 before Minford moved ahead with a serving run of five straight points. Abby Cochenour broke through with a play at the net to cut the lead to 9-5. Then Minford followed with a 5-1 run to increase the advantage to 14-6.

Eastern’s Alexis Clark sparked a 3-0 burst, delivering a kill and then serving two more points, one of which was won on a kill from Eastern libero Megan Nickell. That trimmed the deficit to 15-9. The teams went through a sequence of trading points before the Lady Eagles had a final 3-0 run. Abby Cochenour provided a block, allowing Addison Cochenour to serve two more points, cutting the lead to 20-15. However, Minford finished the set with a 5-1 run to take the match 3-0.

Eastern coach Rhyanna Knauff had praise for her three seniors, saying they are a great group and all three are good leaders.

Wrapping up the statistics from the game, Megan Nickell had a busy day in the back row with 19 digs, while going 26-for-29 in serve receive, and finishing 8-for-9 serving with 1 ace. Alexis Clark had 4 kills and was 9-for-9 serving with 1 ace. Kelsey Poorman handed out 12 assists and added 7 digs. Gracie Fox had 1 kill and 1 block. Lydia Turner added 5 digs, while Kaylee Jones provided 2 digs.

“We’re working hard,” said Knauff. “We are trying to incorporate a consistent rotation, but it has been hard having players out of the lineup (throughout the season).”

Post-season play begins on Wednesday, Oct. 20 when the 13th-seeded Eastern Lady Eagles (4-10) head to fourth-seeded Portsmouth Notre Dame (8-6) in a Division IV sectional final matchup. The winner of that game will advance to the district semifinal on Monday, Oct. 25 at 6 p.m. at a site to be determined.