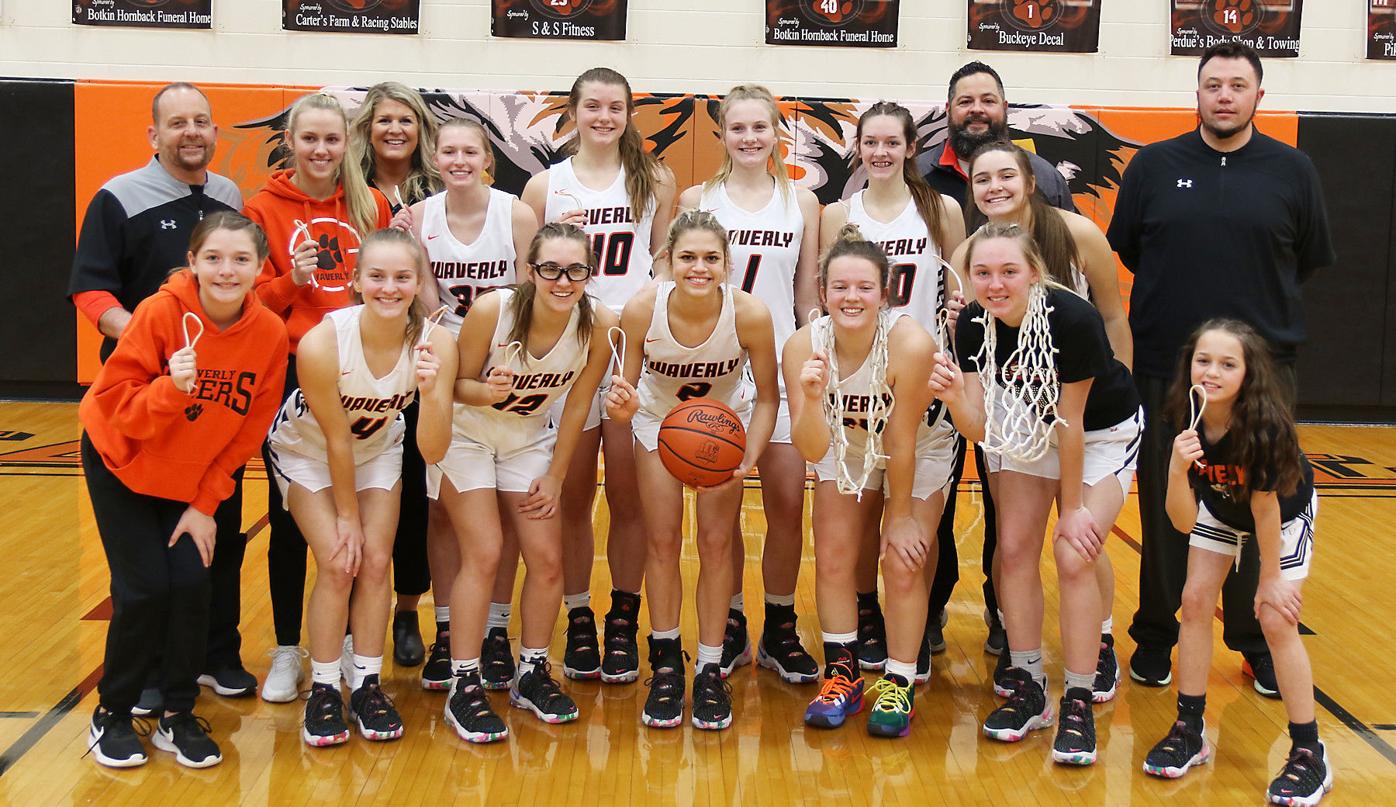 The Waverly Lady Tigers were all smiles Friday night after cutting down the nets on their home court following a 53-38 win over Jackson. 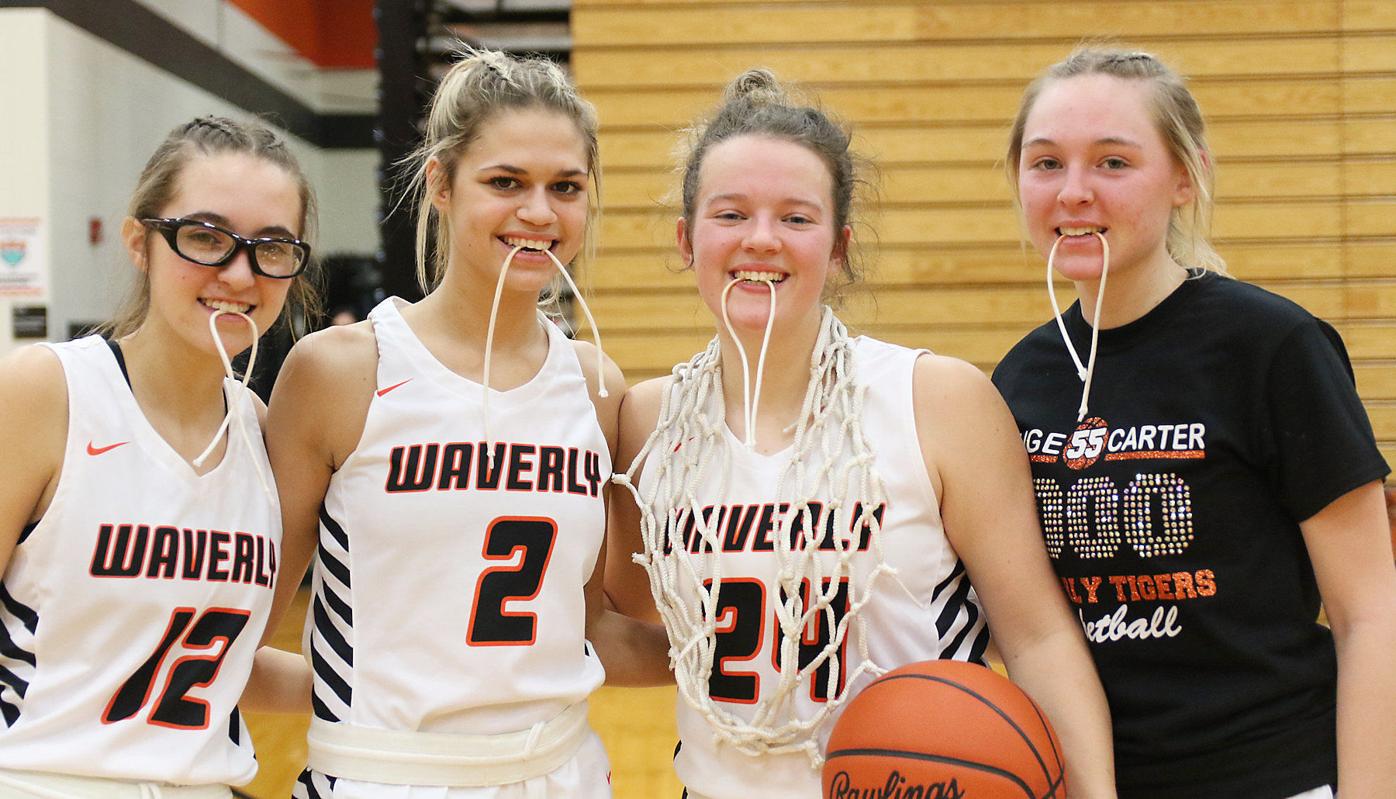 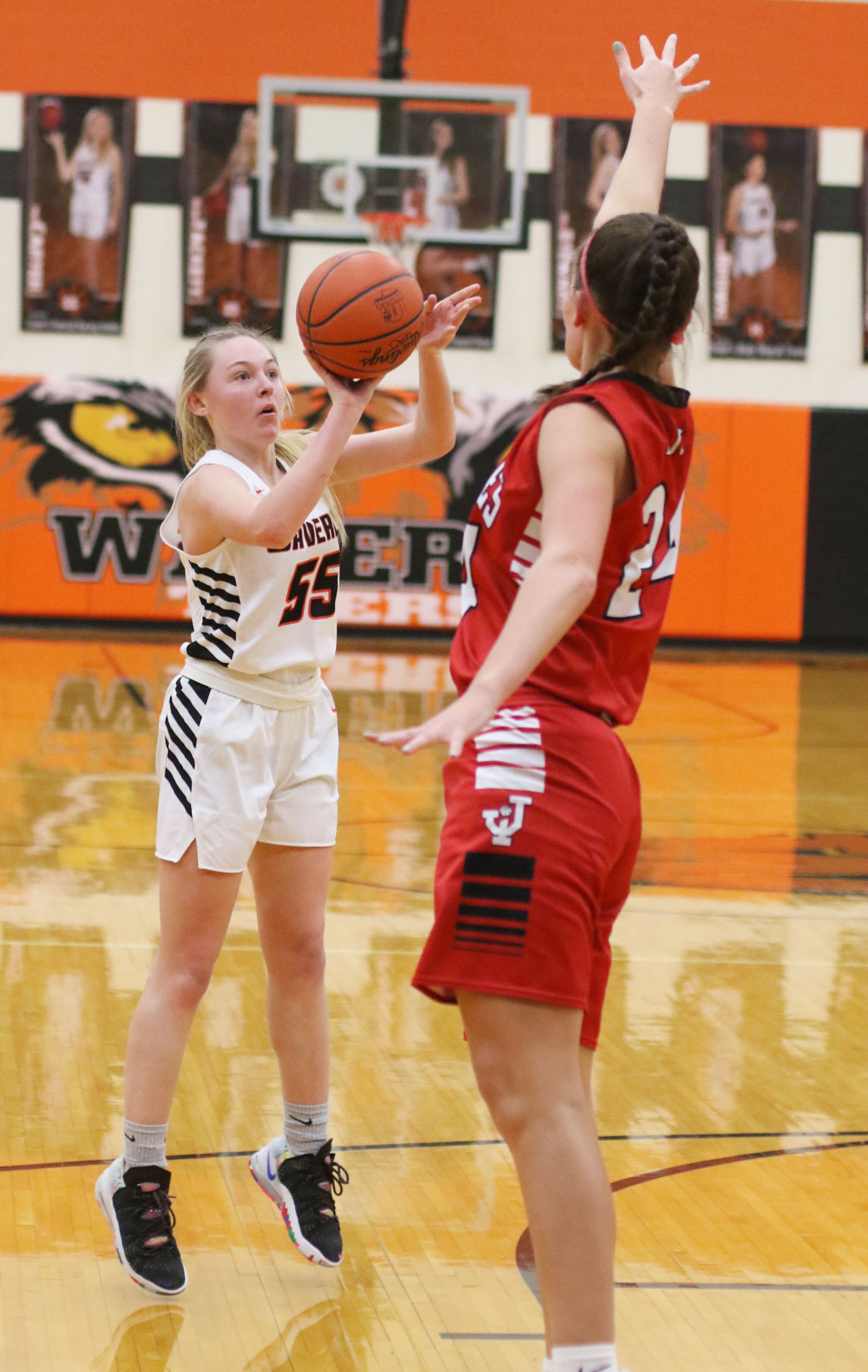 Pulling up for a shot over a taller Jackson defender, Paige Carter connects for a basket giving her 23 points for the game and 1,000 for her career. The milestone came with 57.2 seconds left in the game. 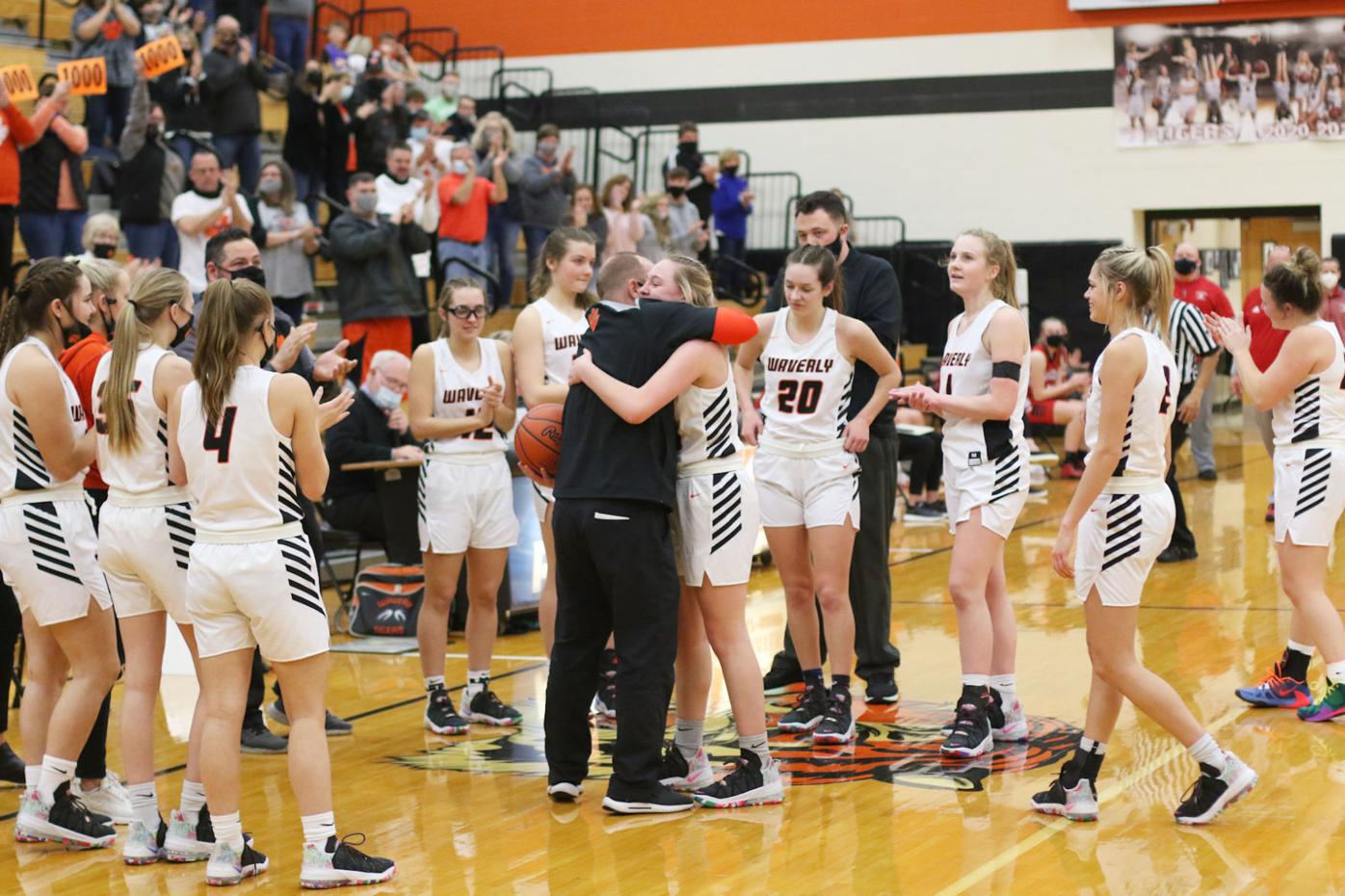 Paige Carter receives a hug and the game ball from Coach John Bonifield after scoring her 1,000th career point in the sectional final win over Jackson. 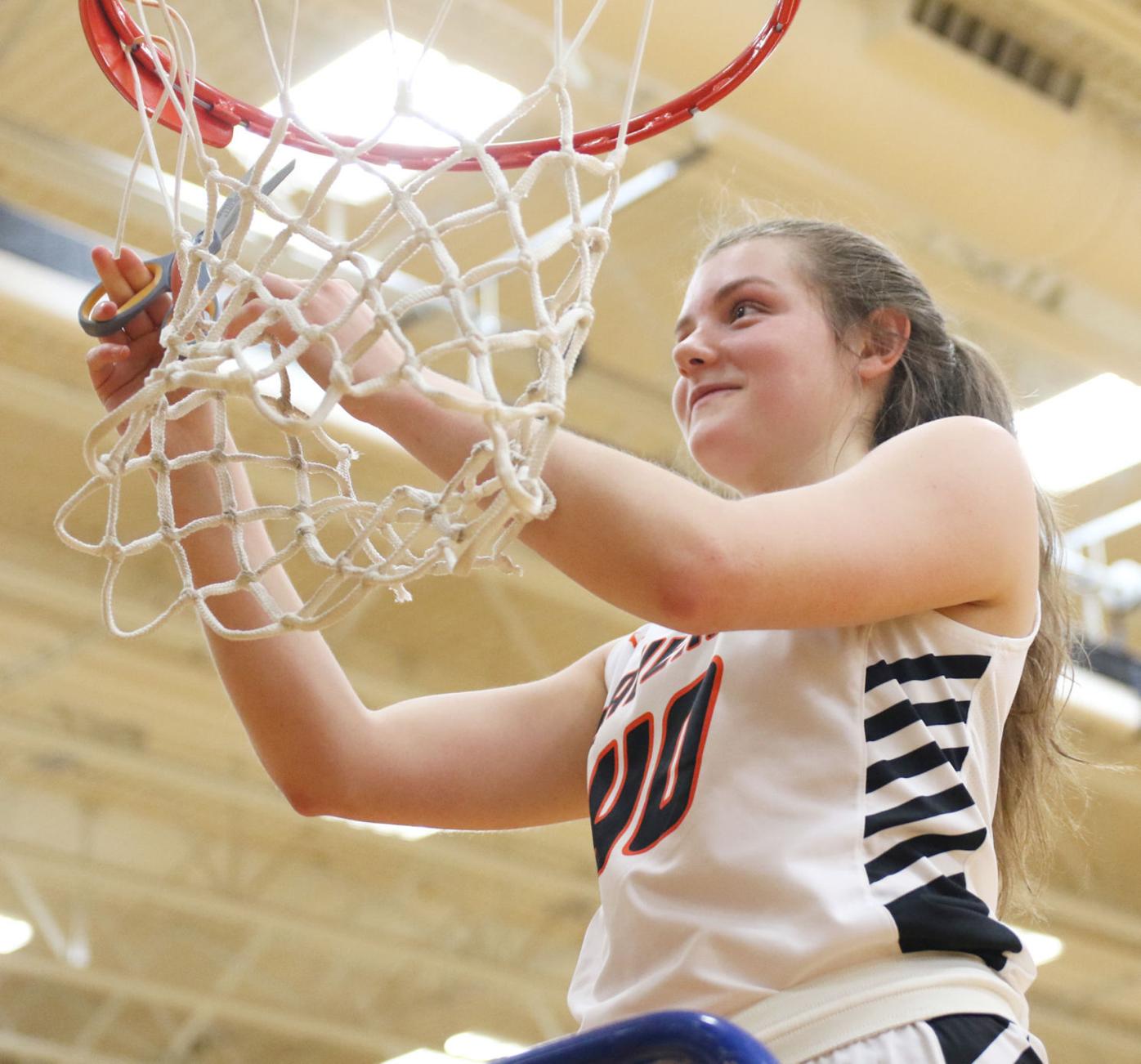 Waverly junior Sarah Thompson cuts a piece of the net. 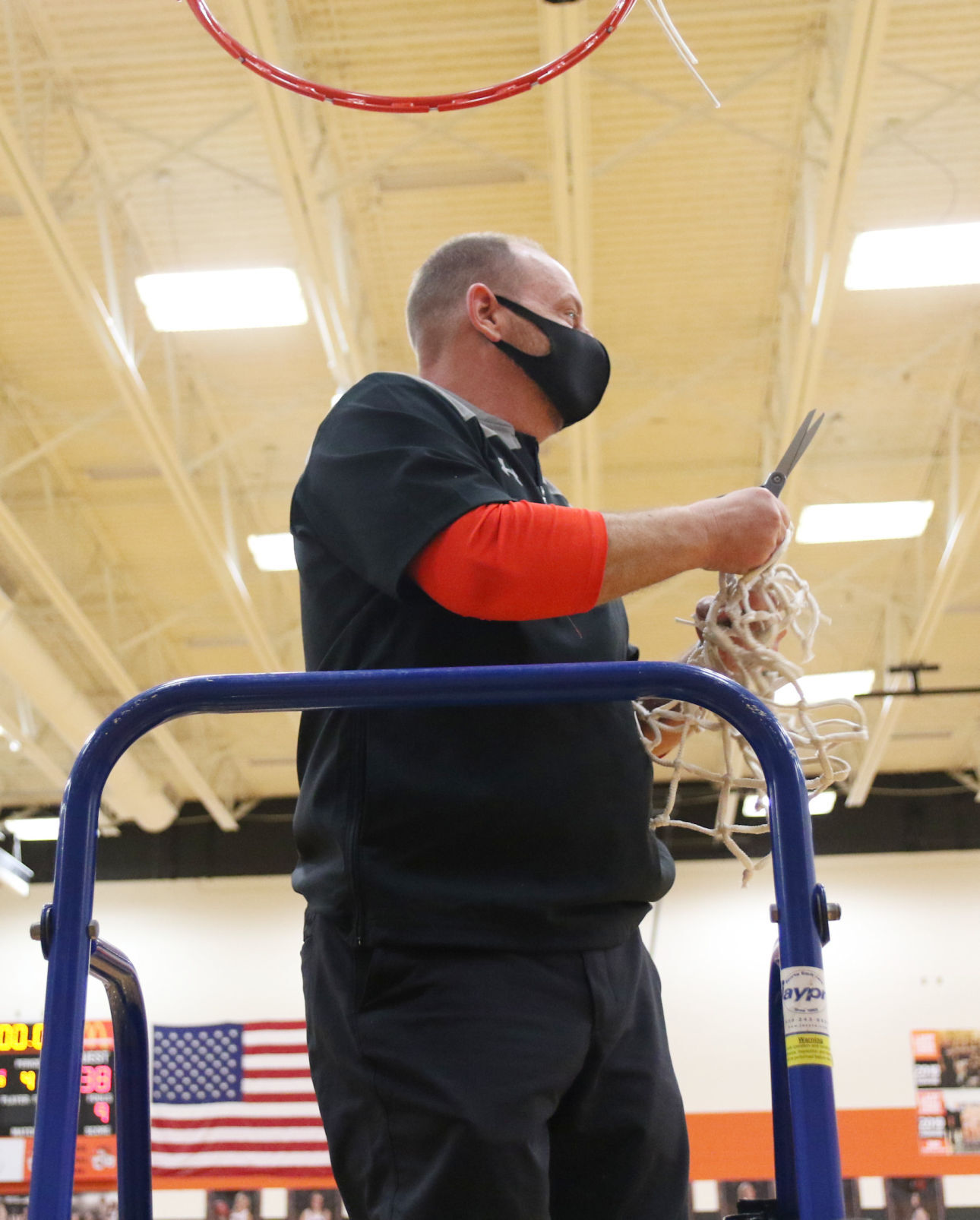 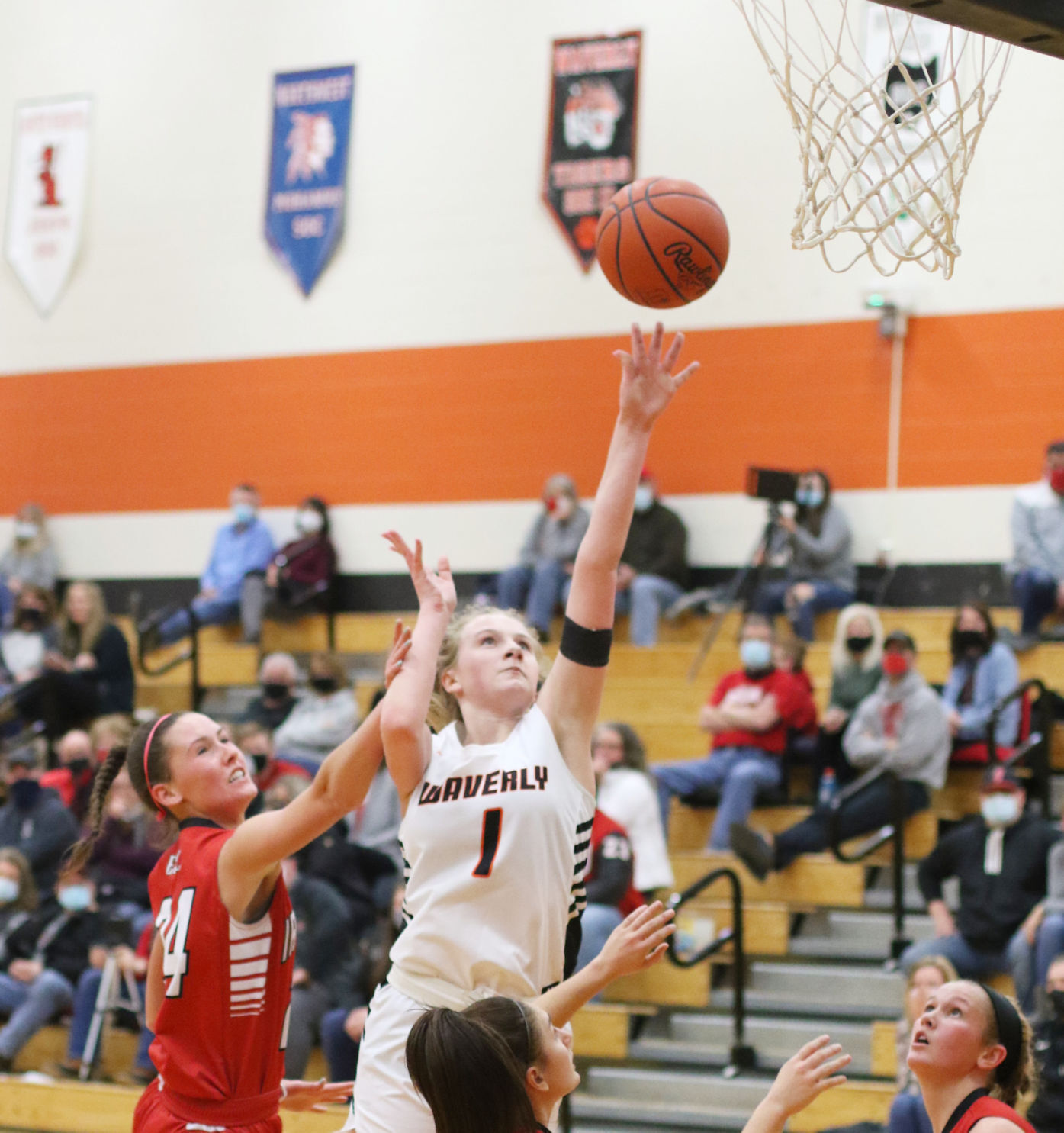 Waverly sophomore Kelli Stewart puts up a shot while being surrounded by three Jackson defenders.

The Waverly Lady Tigers were all smiles Friday night after cutting down the nets on their home court following a 53-38 win over Jackson.

Pulling up for a shot over a taller Jackson defender, Paige Carter connects for a basket giving her 23 points for the game and 1,000 for her career. The milestone came with 57.2 seconds left in the game.

Paige Carter receives a hug and the game ball from Coach John Bonifield after scoring her 1,000th career point in the sectional final win over Jackson.

Waverly junior Sarah Thompson cuts a piece of the net.

Waverly sophomore Kelli Stewart puts up a shot while being surrounded by three Jackson defenders.

In a year where the emergence of the coronavirus now known as COVID-19 has taken so much away, the Waverly Lady Tigers had a unique opportunity Friday night.

In a normal year, basketball tournaments are not played on a team’s home floor. COVID-19 changed that, allowing the Waverly players to celebrate the victory and cut down the nets on their own court. It also gave Carter the opportunity to score her 1,000th point in front of the home crowd. Carter needed 23 points to reach the milestone, and she scored exactly 23, hitting the milestone shot with 57.2 seconds left in the game.

“We had this goal in mind from the beginning. One of our goals was to win the league. Unfortunately, we weren’t able to do that,” said Waverly coach John Bonifield. “One thing this group of seniors wanted to do was cut down nets and win a sectional championship. We were very fortunate with COVID to get a home game, so it makes it even more special to do it on our home floor and end this drought.”

A slow start turned into a fantastic finish for the Waverly Lady Tigers. Jackson went up 5-0 early as Waverly’s first four possessions ended in turnovers. Senior Zoiee Smith was finally able to break through and get her team on the scoreboard. Jackson had an answering bucket, going up 7-2.

As usual, the Lady Tigers turned to their defensive pressure to turn the tide. Double-teaming the ball handler at half court, Smith and junior teammate Ava Little forced a turnover. They both headed for the Waverly basket with Smith providing a nifty assist to Little for the finish. Then Carli Knight created the next two opportunities, deflecting the ball for a steal and score. Knight made off with another steal, getting it to Little for the another hard-fought layup, putting Waverly in front for the first time at 8-7. A block from Waverly junior post player Sarah Thompson led to a free throw opportunity for Kelli Stewart on the other end. Stewart added a point from the line and then scored the final bucket of the quarter, giving Waverly an 11-7 advantage.

The start of the second quarter was slow going. Carter was fouled on the opening possession and hit the second of two freebies. That was her only point in the first half, leaving her 22 to go to reach 1,000 career points. It took nearly three minutes for Smith to break through with Waverly’s first field goal, but the defense had also limited Jackson to just one basket in the same stretch. The two teams traded points for the rest of the half. With Waverly up 22-17, the Ironladies played for the final shot. Junior guard Katelyn Webb delivered with a three-pointer from the top over a Waverly defender, cutting the lead down to 22-20.

Opening the second half, Jackson tied the game twice in the third quarter at 22 and 24, before Carter started heating up by driving and scoring over and around defenders. First came a free throw opportunity for Carter, netting the first point of a 7-0 run. Carter had the next two baskets before Stewart tacked on another off an assist from Smith, 31-24.

Jackson’s T.J. Carpenter snapped the run with a basket, but Carter was right back at it. Taking advantage of an opportunity, Carter attempted a three-pointer and was fouled, sinking all three of her shots. She had two more opportunities to go to the line before the quarter ended, going 3-of-4 during that stretch to increase the lead to 37-28. Jackson cut it back to six on the next possession, only to see Little drain a three-pointer to end the quarter, giving Waverly a 40-31 lead.

Starting the fourth quarter, Stewart cashed in on another assist from Smith to create a double-digit advantage, 42-31. The remainder of Waverly’s points in the game came from Carter. Jackson cut the lead to 42-34 before Carter took off again, scoring on a layup to begin a personal 11-1 run. Her next shot was a three-pointer, opening up a 47-34 advantage.

A brief lull followed with Waverly using a timeout and informing the team that the milestone was close. Carter finished the job by scoring three more times. The final shot was a jumper from just inside the three-point line that Carter hit by shooting over a taller defender. The basket made the score 53-35 with 57.2 seconds to go, giving Carter her 1,000th career point. After a brief stoppage of play for hugs of congratulation and the presentation of the ball, the game closed with Jackson converting a three-point play to make the final score 51-38.

“In the first half, I did terrible. My nerves got to me. I just got really nervous,” said Carter. “In the second half, I cleared my mind and thought, ‘I have just got to do this’.”

Now Carter has joined teammate Zoiee Smith as a 1,000-point scorer. Smith also scored her 1,000th point in a championship game when the Lady Tigers secured their fourth straight Holiday Classic basketball title in the battle for Pike County back on Dec. 28.

The year and the accomplishments continue for the Lady Tigers and the seniors who have been playing for the past four years. That group includes Zoiee Smith, Paige Carter, Carli Knight and Michaela Rhoads.

“It means everything to us, especially the four of us seniors. Twenty-one years is a long time. We came in with these expectations and this pressure,” said Zoiee Smith. “Look at the teams we play, especially once we get into the tournament. The amount of talent is crazy. Now we have to travel to Vinton County. It is hard to get a tournament win in Division II. The four of us, especially me, couldn’t do it without the rest of the girls.”

Smith has been out of the lineup with an ankle injury since the month began.

Smith finished her night with just six points, which is below her average, but she delivered seven assists and collected four rebounds.

Carter led the way with a double-double, producing 23 points and 11 rebounds.

“I honestly couldn’t have gotten my 1,000 points without Zoiee,” said Carter. “Both Zoiee and Carli know when I’m open under the basket. They get the ball to me so I will get a layup. That’s how I scored most of my points.”

Knight had to step into the point guard role while Smith was out of the lineup.

“It was a little nerve wracking. I kind of got mad at Zoiee and said, ‘When are you coming back? I’m tired of it,’ said Knight, jokingly.

Each member of the team has a role to fill. The seniors all know their roles and thrive in the teamwork and victories that have followed.

“Our team has really great chemistry, and I think that helps a lot,” said Rhoads. “Carli and I are defenders. We both have good defensive minds because I play defense in soccer, and Carli is a good defender in volleyball.”

“Yeah, that’s our game,” added Knight. “We let them score and get their 1000 points. We just want our steals and deflections.”

With each senior holding a piece of the net after getting to cut it down for the first time, Carter said, “This means so much. Zoiee, Carli, Michaela and I have grown up playing with each other. To break the drought after 21 years says a lot about our team.”

Knight added, “I just think this is amazing, and I’m so proud of how hard we’ve worked all together this year.”

Speaking of Knight, she produced five steals and four rebounds to go along with four points, while helping handle the point guard spot from time to time. Off the bench, Kelli Stewart added 13 points and five rebounds, while Ava Little produced seven.

Back when Waverly and Jackson played the first time, on Dec. 5, Bonifield talked about Jackson’s potential to be a very good team by the time the end of the season arrived. The Ironladies start four freshmen and a junior. Waverly won that Dec. 5 game by a score of 54-35.

“They’ve definitely gotten better, but we’ve gotten better as well. We knew it would be a hard-fought game. They are sound and do all of the little things well. They have good size and good shooters,” said Bonifield.

“It was somewhat reminiscent of our first game where it was close, and then in the fourth quarter, we were able to extend the lead and pull away from Jackson a little bit. No doubt about it, Coach (Matt) Walburn has a great group over there, and they are going to be tough the next three years. He’s a great coach who does a great job. Their future is very bright.”

Since Waverly’s last sectional title came in the 1999-2000 school year, none of the current players on the roster were even born.

“Now we have girls in our program in junior high and biddy ball who don’t have to hear about the last sectional title by word of mouth or story telling. Some of them have seen it,” said Bonifield. “They will see this is something to work for and know that we are capable of winning a sectional championship.”

With the second-seeded Vinton County Vikings in the other bracket, the Lady Tigers (16-6) will likely be headed to Vinton County for their Division II district semifinal contest versus the fourth-ranked Lady Vikings on Tuesday at 7 p.m.