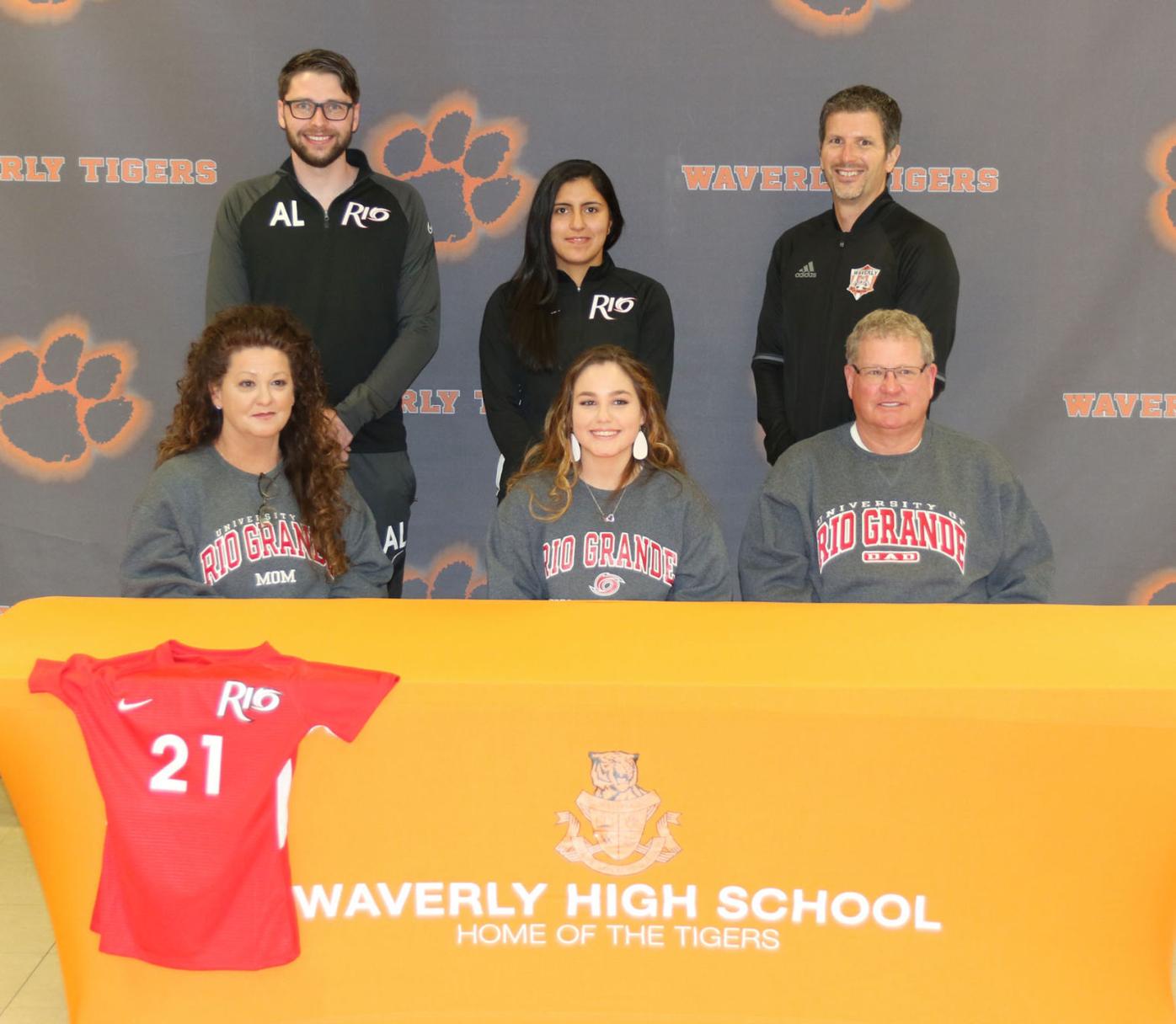 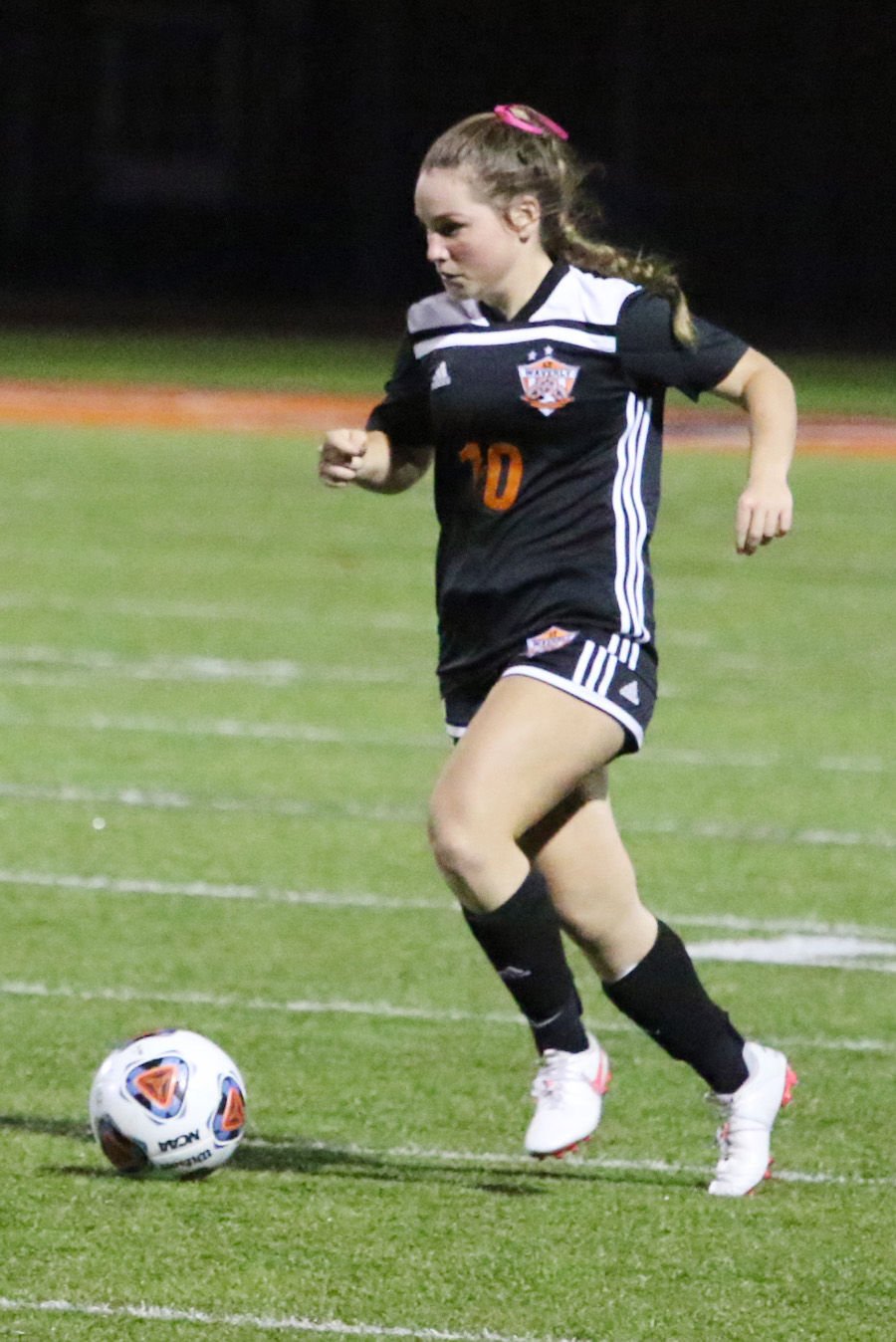 Controlling the midfield, Waverly’s Amelia Willis pushes the ball up the field during a home game late in the season. 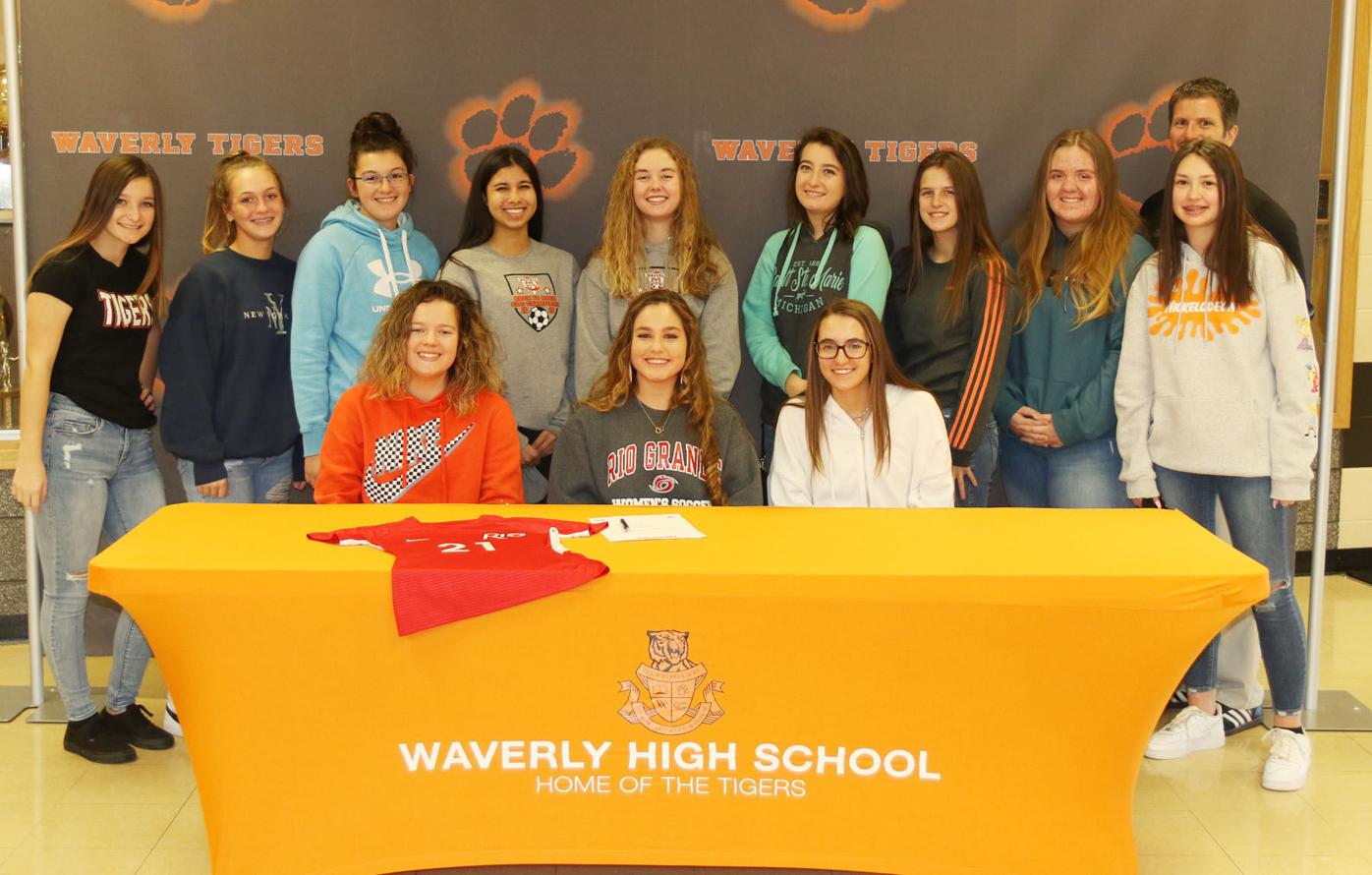 On the day of her signing, Amelia Willis sits with her soccer teammates for a group photo. 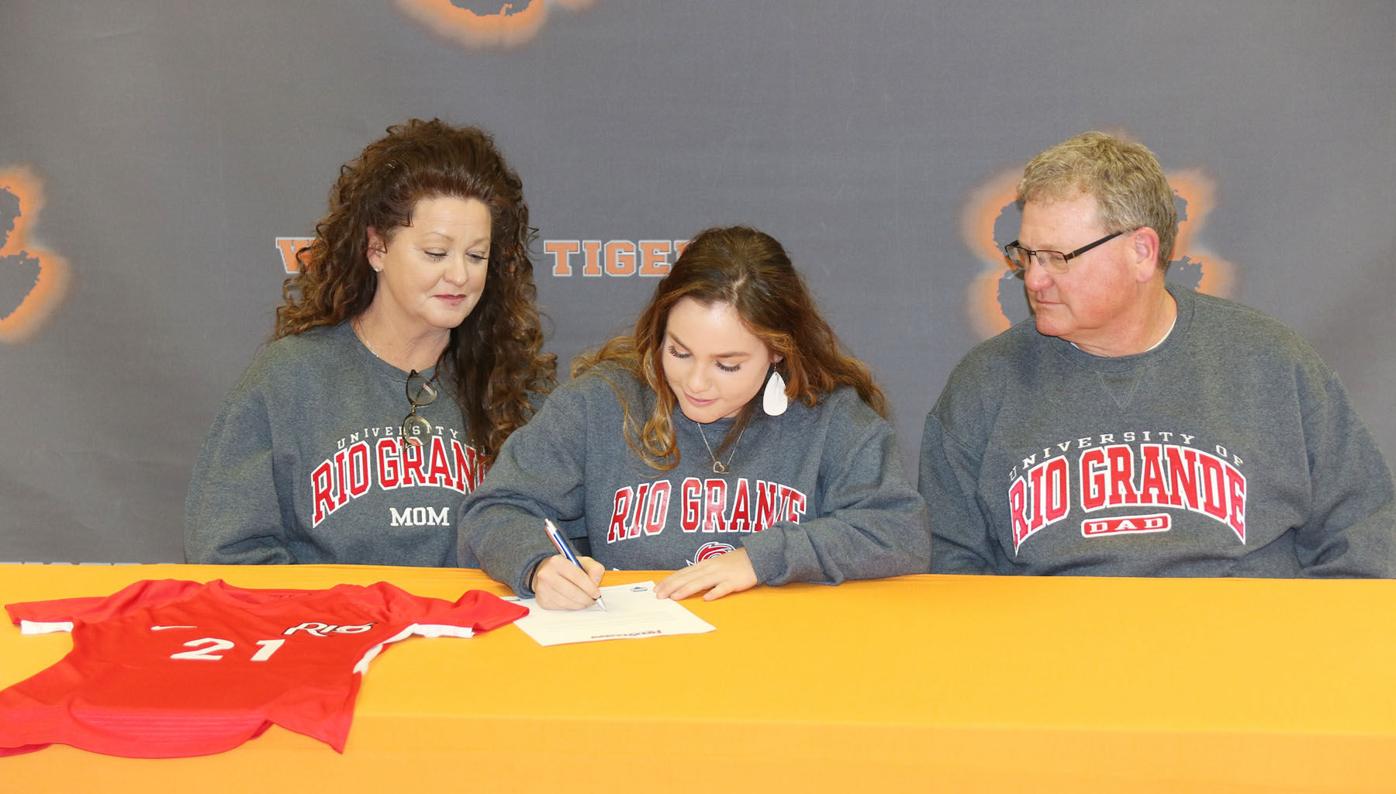 With parents Teanna and Gil watching, Amelia Willis makes it official, signing with the University of Rio Grande for soccer. 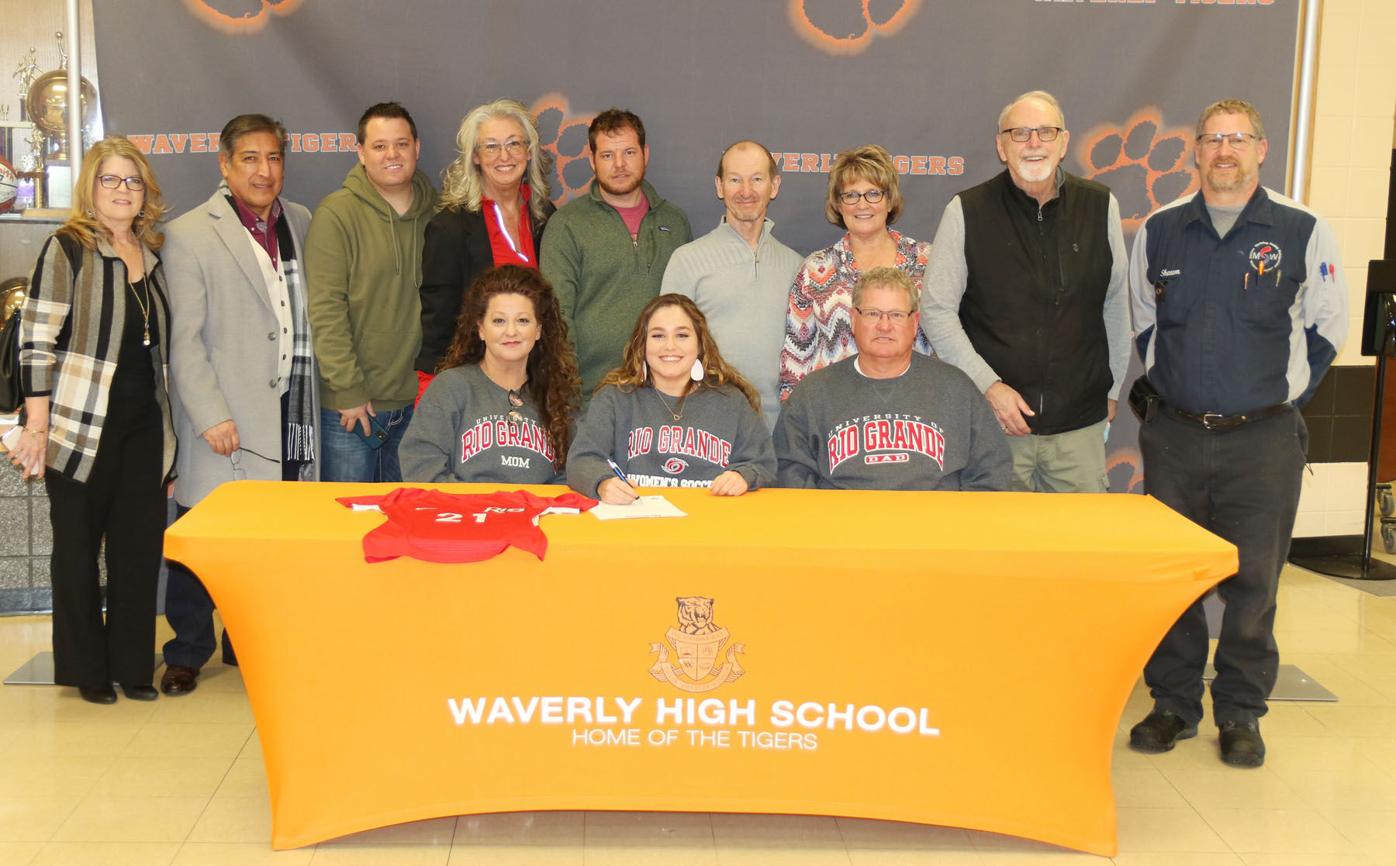 Amelia Willis sits with all family members present for her signing day. 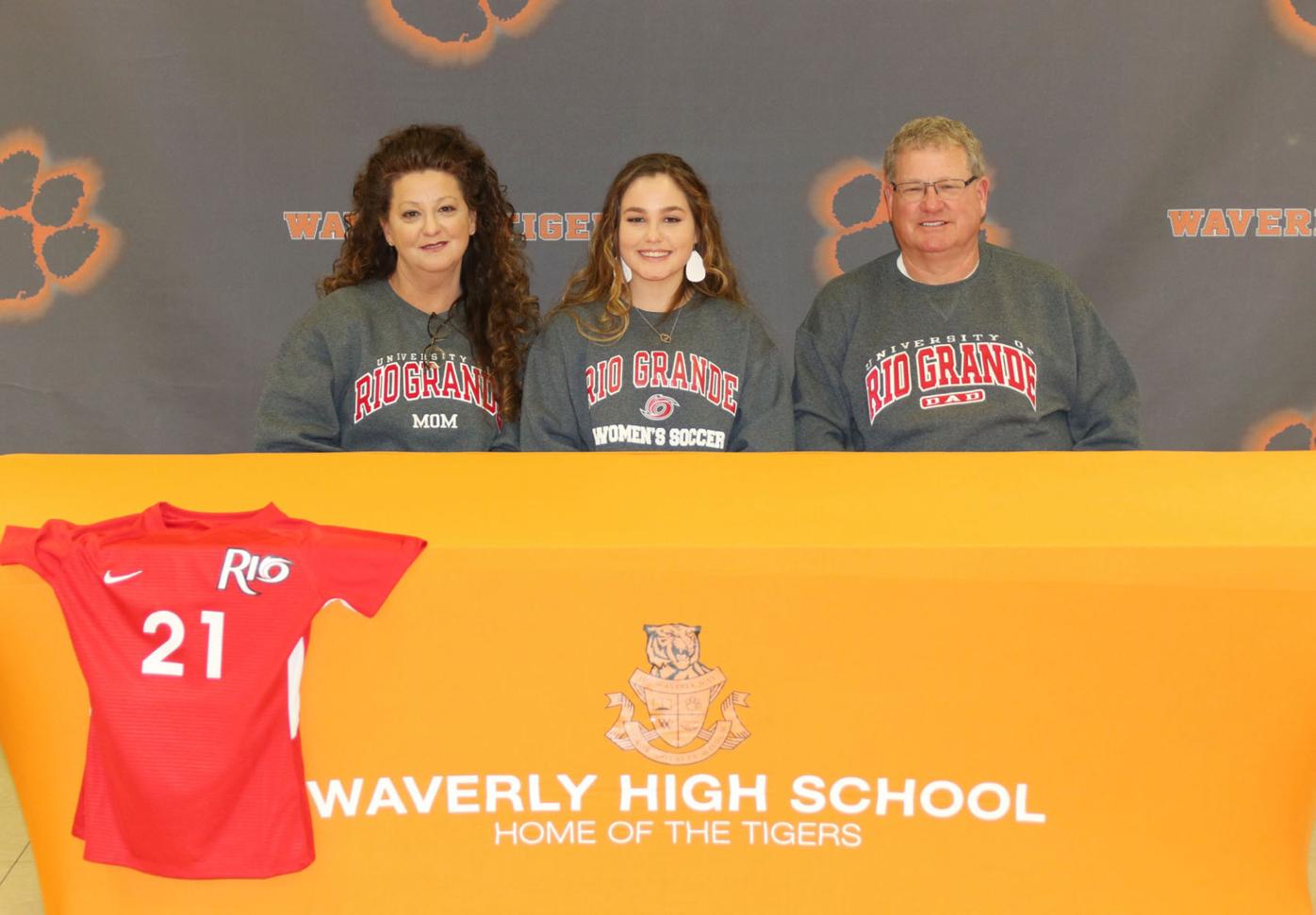 Amelia Willis sits between her mother Teanna and her father Gil. 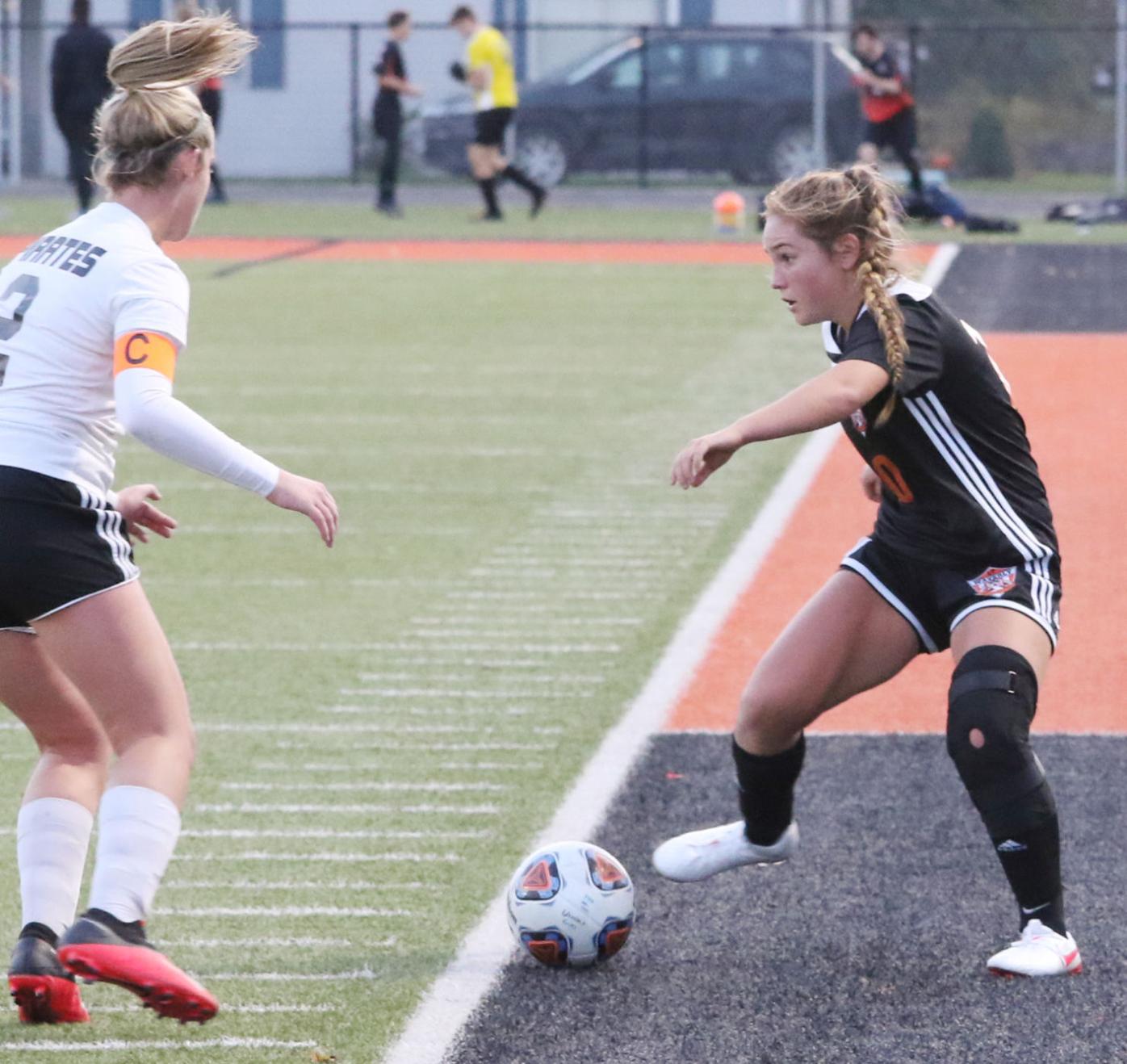 Amelia Willis works to get the ball past a Wheelersburg opponent during the battle between the two teams at Raidiger Field.

Controlling the midfield, Waverly’s Amelia Willis pushes the ball up the field during a home game late in the season.

On the day of her signing, Amelia Willis sits with her soccer teammates for a group photo.

With parents Teanna and Gil watching, Amelia Willis makes it official, signing with the University of Rio Grande for soccer.

Amelia Willis sits with all family members present for her signing day.

Amelia Willis sits between her mother Teanna and her father Gil.

Amelia Willis works to get the ball past a Wheelersburg opponent during the battle between the two teams at Raidiger Field.

In the past two years, the Waverly Lady Tigers have enjoyed plenty of success on the soccer pitch.

A huge part of that success can be attributed to this year’s senior class — a group which is full of many college bound athletes.

On Wednesday, Feb. 3, senior Amelia Willis became the first of the group to sign for soccer, inking with the University of Rio Grande.

“Amelia came to our program in her junior year. I wish I would have had her for four years,” said Waverly coach Chris Murphy.

“Amelia is an exceptional young lady. She is one of the hardest working players that I’ve ever had the privilege of coaching. She has a motor in her that just does not quit. She works tenaciously on offense, and defensively, she is just as effective and just as ruthless, which makes her an outstanding central midfielder.”

Willis, who played two years of high school soccer at Unioto before returning to Waverly, provided a lift offensively and defensively when she joined the Lady Tigers. Waverly won the program’s first ever Southern Ohio Conference soccer title in 2019, sharing it with Wheelersburg with an 8-1 record. The Lady Tigers finished with an overall record of 14-4-0.

According to Waverly’s Max Preps site, in her junior year, Willis had 22 goals, 10 assists and 44 steals. In all, she took 77 shots with 76 of those being on-goal.

In 2020, the Lady Tigers defended their SOC title, taking the crown outright without any sharing at 9-0-1. Their overall record was 14-3-1. According to Waverly’s Max Preps site, Willis scored 30 goals this year, provided eight assists, and also had 27 steals. She took 111 shots with 107 those being on goal.

“Amelia contributed significantly to the leadership on the field. She was a good leader. She did a great job scoring for us and setting up goal opportunities for others,” said Murphy. “She is going to be missed greatly. Amelia was our muscle. She held the middle for us and made it difficult for teams to get through. We will miss all of our seniors. They are a great group and a remarkable group.”

Murphy is excited that most of the seniors are going to nearby schools because he will have the chance to go watch them play. In some cases, former teammates may become opponents at the NAIA level.

“It is amazing to be able to continue playing soccer. Looking back at my freshman year, I never dreamed that I would be able to play college soccer,” said Willis, discussing the decision and the work that has gone into it.

“It has been hard. I’ve had ups and downs mentally and physically. I’ve had some injuries that set me back. Coach Murphy has really helped me to push through. He and (Assistant Coach) Danielle (Boggs) have been awesome with the fitness, not just for high school, but also getting me ready for the next level.”

The closeness to Pike County as well as other factors drew Willis to Rio Grande.

“It was a family decision. I liked how close it was. Tony (Daniels), the Rio coach, has been talking to me since my freshman year at Unioto. I played for him at FCFC (First Capital Football Club) when he was coaching the travel team. We have known each other for a while,” said Willis. “I knew a lot of the girls there because they went to Unioto when I was there. I went down to Rio Grande during the summer and did an open field with them. The girls were really nice and I got to know some of them a little bit. I also went down there for tours and met a lot of the girls.”

Willis plans to major in business management at the University of Rio Grande. She expects that she will stay in the midfield when she takes the soccer field.

“I’m very aggressive. Tony really likes that,” said Willis. “He likes the fire. I think he’s going to use that asset for the team.”

An additional connection to Rio Grande is graduate assistant coach Andrew Lightle, a Waverly grad and soccer player, who will be on staff during Willis’ freshman year.

“Amelia is a really good player. We are expecting to have a good recruiting class going into this fall. She is going to be a big part of that,” said Lightle.

“Here (at Waverly) they inspired me to follow my dreams. There are a lot memories walking in here and coming back to the school, even as a soccer player at Waverly. To get another player from Waverly is awesome, as well as bring in one of the top local players to Rio Grande as well.”

Also on staff as a grad assistant is Luisa Herrera, who added, “More than her playing skills in soccer and her knowledge, Amelia is super motivated. Her attitude is amazing and her eagerness to win is taking her to our program.”

Rio Grande played to a 7-2 record in the Mid-South Conference and 7-3 overall during the fall months. But play was stopped after Oct. 31 due to COVID-19. So the coaching staff will be busy preparing for the season to resume on Feb. 27 before getting into the conference tournament.

Willis will look to work hard and get into the mix when she arrives on campus in the fall.

“Amelia is willing to work hard. She has very good vision with the ball. Her footwork is very good,” said Murphy. “She’s going to be an absolute asset to Rio Grande’s program.