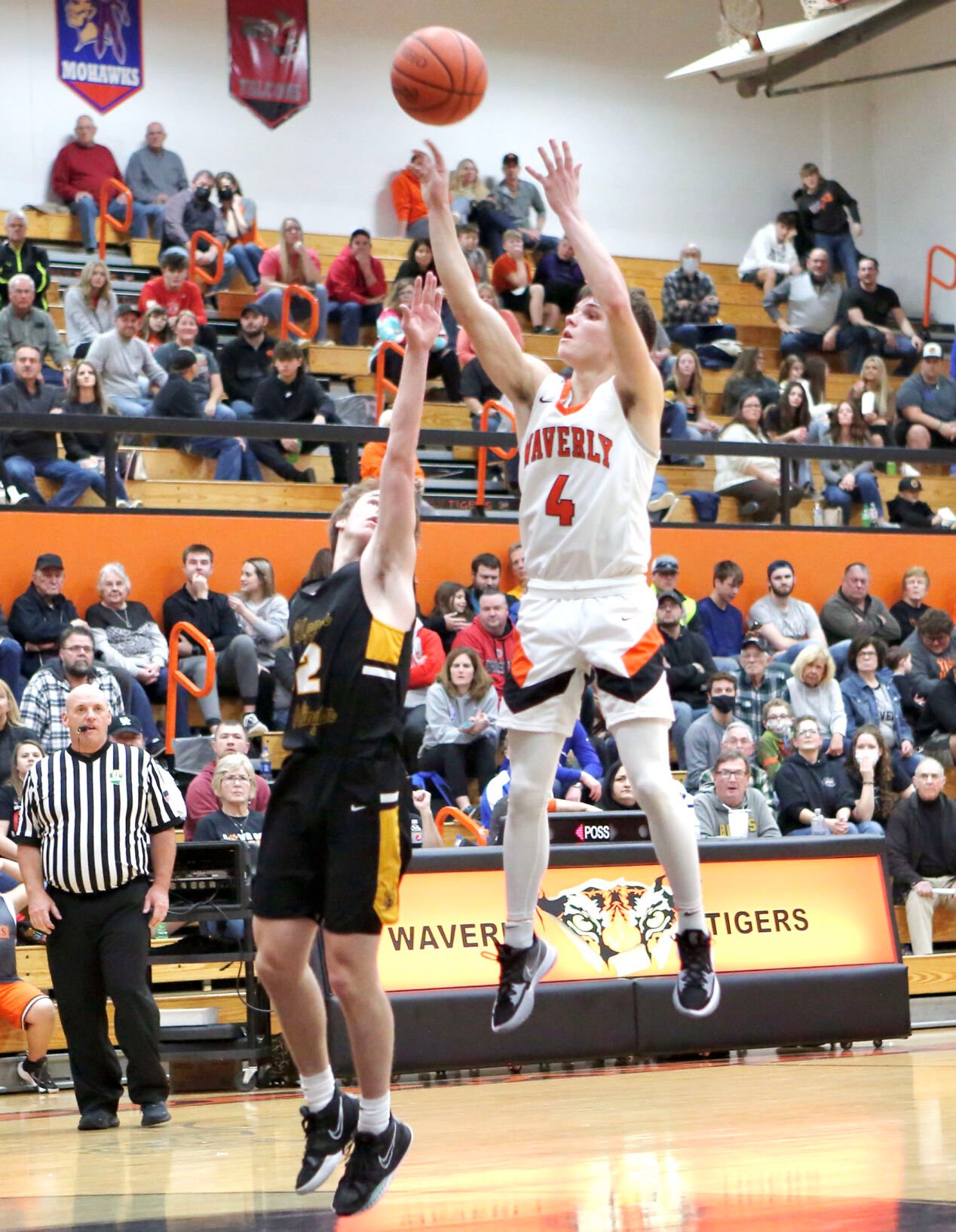 Waverly senior Trey Robertson gets high up in the air for a jumpshot in the game against Upper Arlington. Robertson led all scorers with 27 points in the loss. 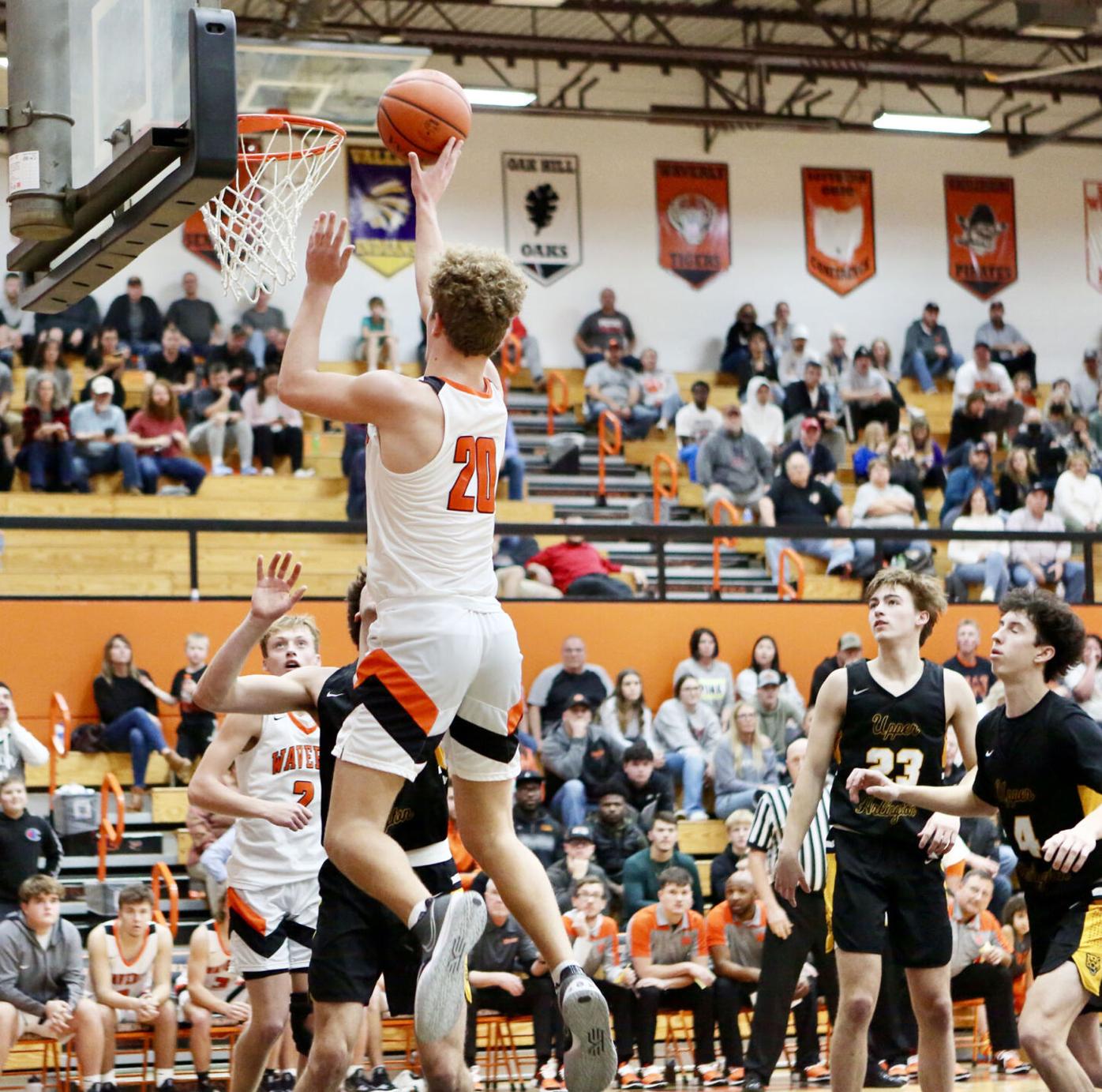 With teammate Hudson Kelly ready on the other side for a potential rebound, Waverly senior Will Futhey pulls up for a baseline shot against Upper Arlington. 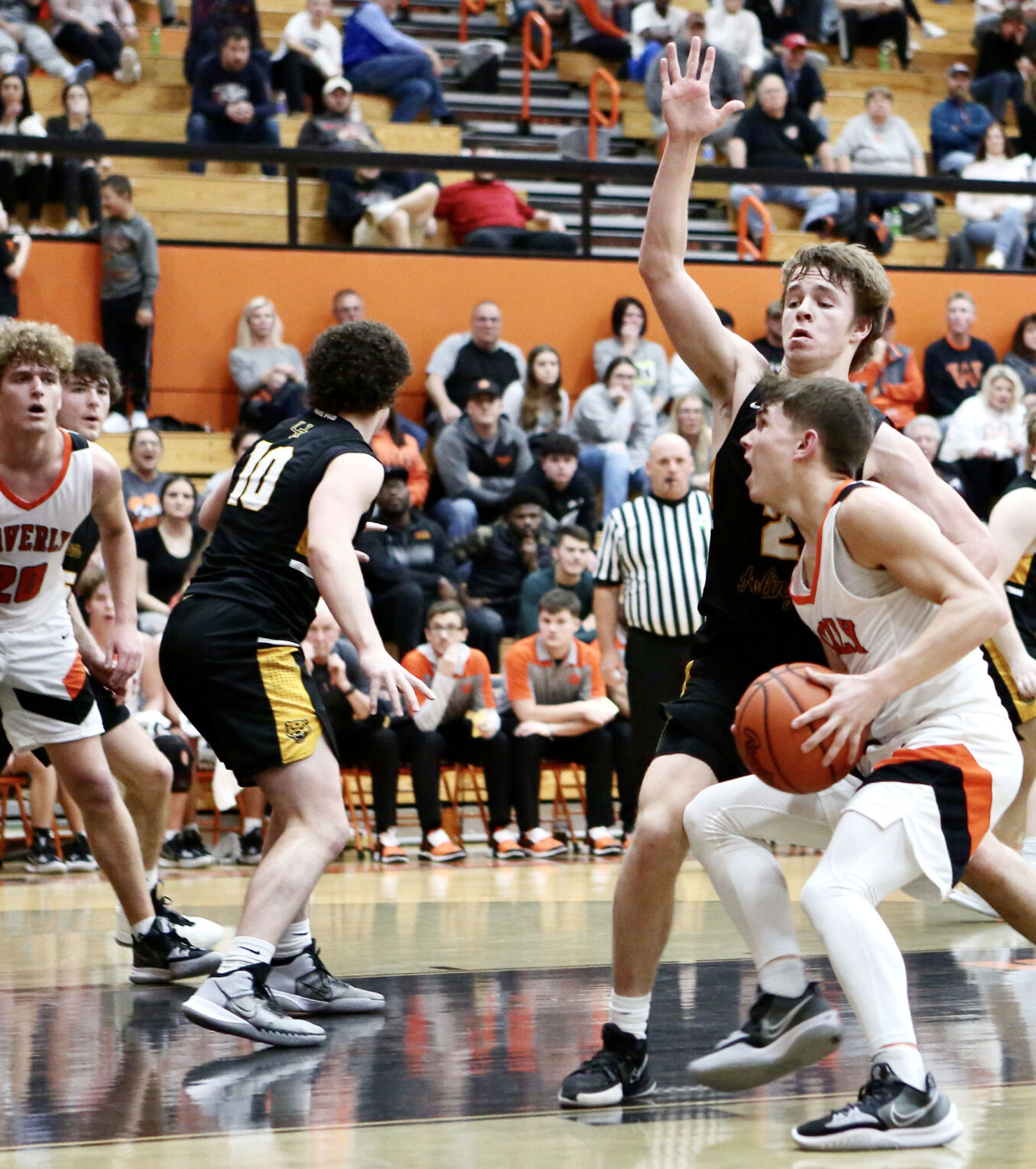 Waverly’s Trey Roberston fights his way through the lane with an Upper Arlington defender in stride in the Thursday, Dec. 30 clash between the two teams. 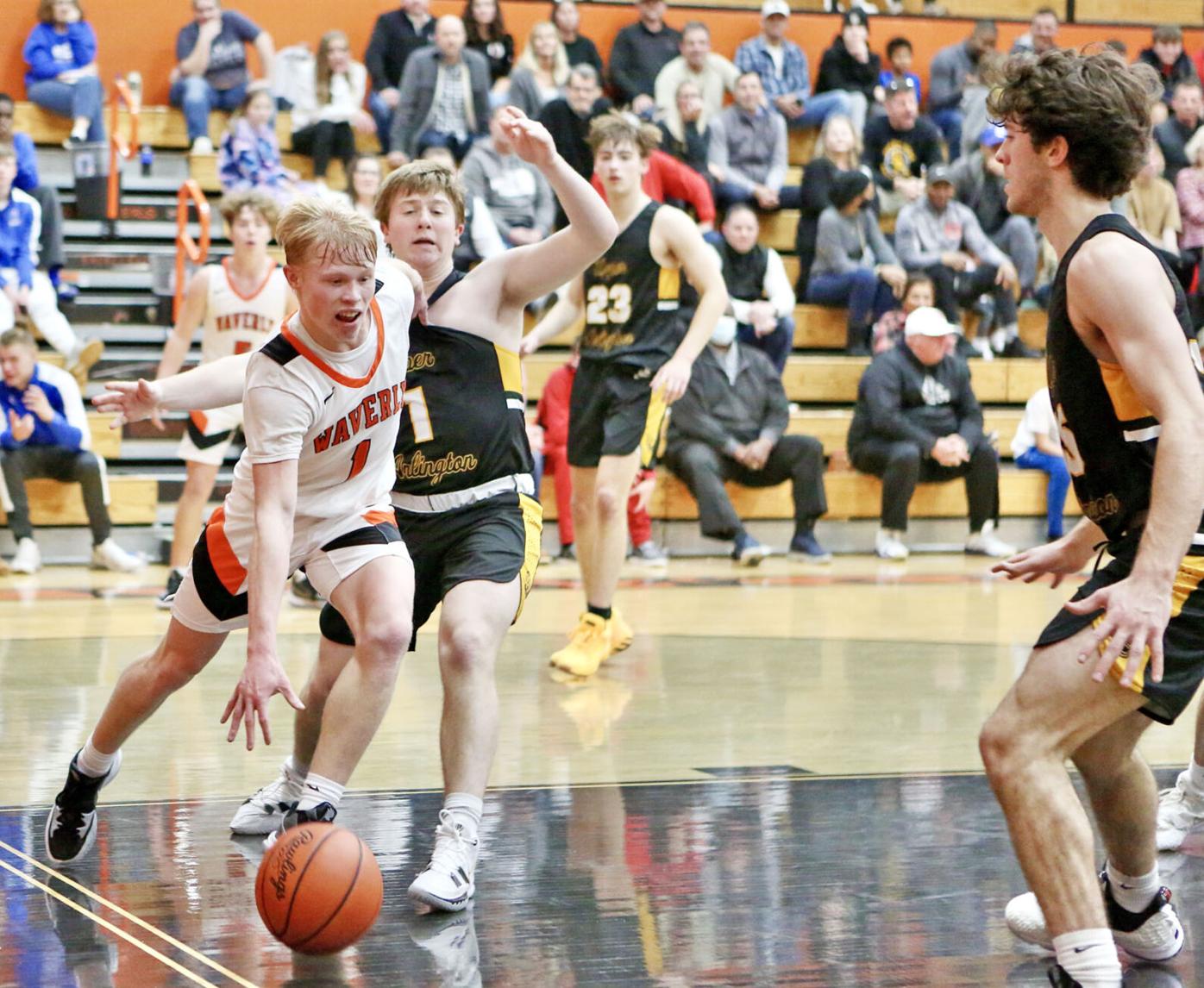 Waverly guard Mark Stulley cuts across the lane with an Upper Arlington defender in pursuit during Thursday’s battle between the two basketball teams.

Waverly senior Trey Robertson gets high up in the air for a jumpshot in the game against Upper Arlington. Robertson led all scorers with 27 points in the loss.

With teammate Hudson Kelly ready on the other side for a potential rebound, Waverly senior Will Futhey pulls up for a baseline shot against Upper Arlington.

Waverly’s Trey Roberston fights his way through the lane with an Upper Arlington defender in stride in the Thursday, Dec. 30 clash between the two teams.

Waverly guard Mark Stulley cuts across the lane with an Upper Arlington defender in pursuit during Thursday’s battle between the two basketball teams.

Playing the marquee basketball matchup of their own S.O.C.S. Wireless Shootout Thursday evening, Dec. 30, at 8 p.m., the Waverly Tigers had very little margin for error against the visiting Upper Arlington Golden Bears.

Although the scoreboard read 59-50 in favor of Upper Arlington when time expired, that didn’t tell the entire tale of the game that was played.

Throughout the first half, neither team had more than a three-point lead. That trend continued into the third quarter when defensive lapses led to some opportunities for the Golden Bears, who pushed their lead to 43-41 going to the final quarter.

Waverly senior Trey Robertson opened the fourth quarter with an exclamation point, pulling up for a long three-pointer that gave his team the 44-43 lead with 7:45 left in regulation. Unfortunately for the Tigers, it was their last lead. Upper Arlington reclaimed it on the next possession. That was the start of a long scoring drought by the Tigers that lasted more than six minutes. Upper Arlington added 14 points during that same stretch, increasing the lead to 57-44, while the Tigers went 0-for-4 from the floor and 0-for-2 from the line.

Finally, Waverly senior Wade Futhey was able to break through with a three-pointer with 52.7 left to play. It was a frantic defensive effort that led the Tigers to scoring again, after Mark Stulley made the recovery on a forced turnover, getting the ball to Robertson for another trifecta with 34.5 left to play that cut the lead to 57-50.

Waverly forced another turnover, but couldn’t get a shot to fall. After putting Upper Arlington on the foul line, Waverly got the defensive rebound and Trey Robertson fired off a final three-point attempt that missed the mark. Upper Arlington’s Drew Graves collected the rebound and drove to the other end for a bucket as time expired, making the final score 59-50.

“Our kids fought and battled. I’m proud of the way they fought tonight. To come out of here with a win, our margin of error against them was very slim,” said Waverly coach Travis Robertson during a post-game interview. “We made too many mistakes in a stretch where we had some good looks at the rim and missed them.”

Waverly had been able to limit the damage done by Upper Arlington’s 6-foot, 3-inch senior wing, Nick Heath, in the first half. But in the third quarter, Heath was able to get free for three three-pointers, giving his team leads of 32-31, 38-33, and 43-38. Trey Robertson was fouled on a three-point attempt in the final 30 seconds, hitting all three shots to pull the Tigers within two, 43-41. Heath had another three-point attempt before time expired in the quarter, but it was off the mark.

“We lost our guy defensively, Heath, and he knocked in a couple back-to-back threes,” said Waverly coach Travis Robertson. “We talked to our guys being absolutely zero help off of Heath — not to leave him unguarded. But when you are in the heat of the game, sometimes you see a guy driving, so you want to step over and help defend. Heath made us pay for it.”

It was a game where neither team had many turnovers. Waverly had just seven, while Upper Arlington had six.

“They don’t turn the ball over. Coach (Tim) Casey is a heck of a coach. He’s been around for a long time. He has produced tons of college basketball players at Upper Arlington. We knew we had our hands full, not just against the team, but also against the coaching staff. I love competing with those guys and testing the waters with what we have,” said Coach Robertson.

“He (Coach Casey) probably gave me the biggest compliment of any coach that I’ve talked to recently, saying our kids are probably the toughest kids he’s played against the entire year. That made me feel good.”

Trey Robertson was the leading scorer for the game, delivering 27 points for the Tigers, including five three-pointers. Will Futhey followed with 12 points and Wade Futhey provided six points on two three-pointers. For Upper Arlington, Quinn Corna led with 22 points, followed by Nick Heath with 14 and Drew Graves with seven.

“Every night before we play a game we write up the one goal they set this year — a regional championship,” said Robertson. “I told them tonight was a night to get better and move forward toward that regional championship. If our kids give this type of effort every single time that we play, we are going to be a tough out for anybody.”

The battle with Upper Arlington has been the third game the Tigers have played against a non-league opponent they expected to test them. The others, an overtime loss to Newark, and a win over Hurricane, West Virginia, came earlier in the month. Another looms in the future as the Tigers will travel to Smithville in northeast Ohio on Feb. to face Col. Crawford. In between, they will battle with strong Southern Ohio Conference Division II opponents.

“We’ve been right there with every one of these teams. We just haven’t been able to close it out every time,” said Robertson. “I’d love to be able to close it out. It shows that our kids can get up for big games and play. The preparation and stuff coming into the game was like a tournament game. You can’t get a better team than Upper Arlington with their coaching staff. It was a great experience. We were right there.”

The Tigers (5-3, 3-1 SOC II) were set to get back into SOC II competition on Tuesday evening when they traveled to Portsmouth West. On Friday, they were tentatively scheduled to play Oak Hill at home, but that game may be postponed until a later time. On Saturday, they will go to Wheelersburg to play the Pirates in a game that was rescheduled from earlier in the season.

Will Futhey scores on an assist