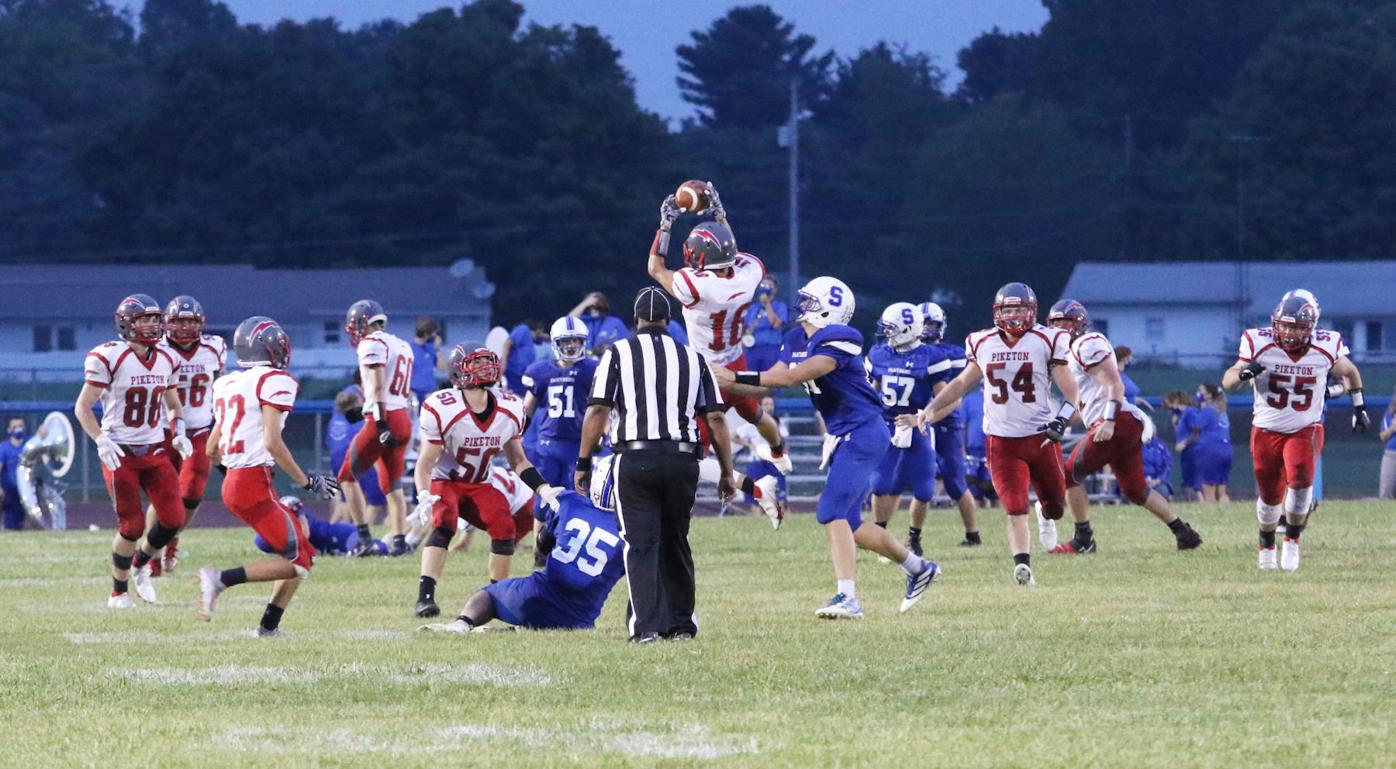 Piketon safety Camren Loar leaps high in the air to snag an interception early in the second quarter of Friday night’s game at Southeastern. 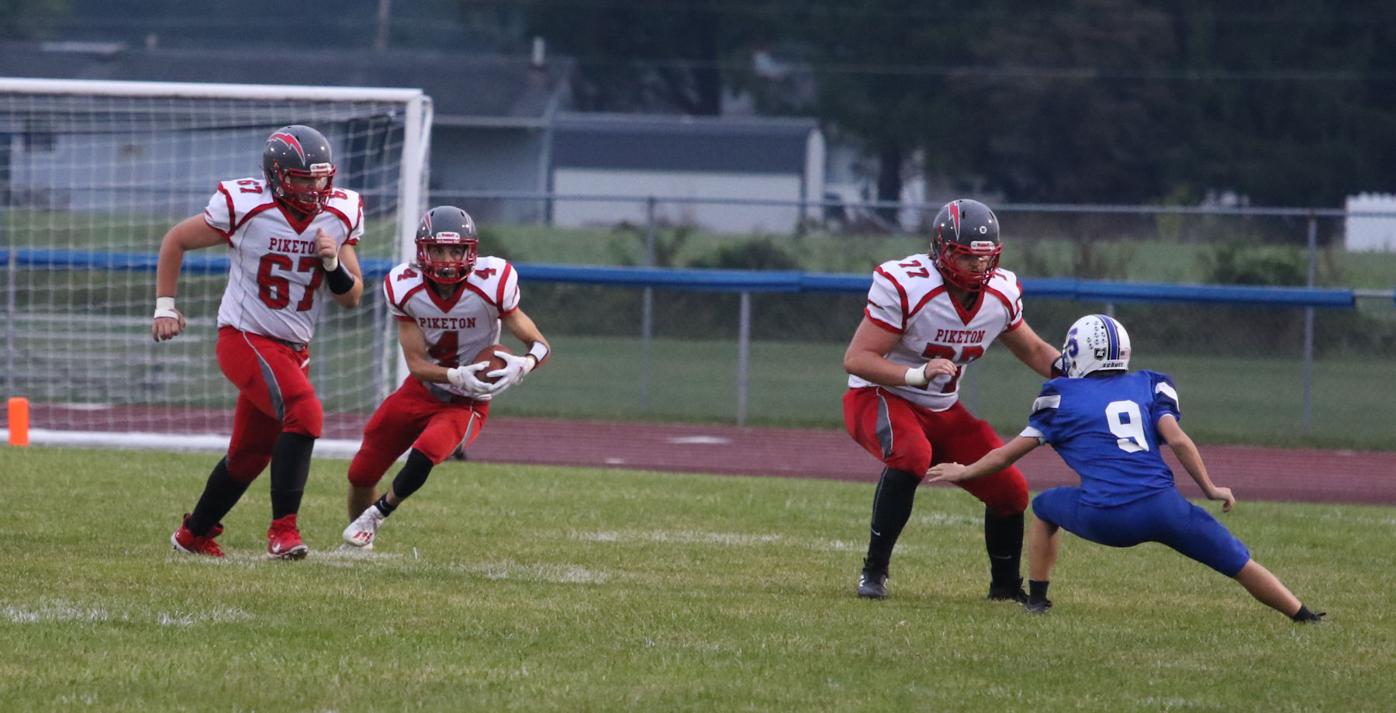 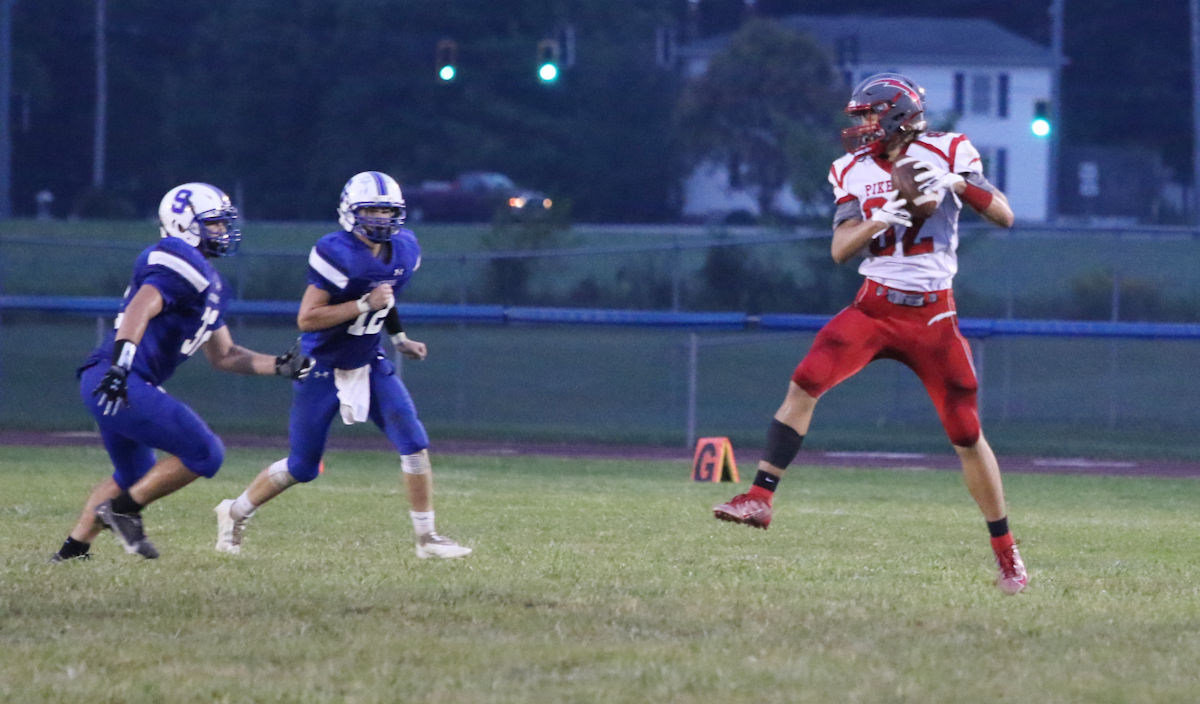 Piketon senior Chris Chandler comes down with the ball after making a leaping grab of a Levi Gullion pass.

Piketon safety Camren Loar leaps high in the air to snag an interception early in the second quarter of Friday night’s game at Southeastern.

Piketon senior Chris Chandler comes down with the ball after making a leaping grab of a Levi Gullion pass.

Behind a dominant performance on both sides of the ball, and a handful of touchdowns by junior quarterback Levi Gullion, the Piketon Redstreaks earned their first win of the season against the Southeastern Panthers by a 46-16 final Friday night.

The Redstreaks wasted no time on their first drive as they marched 50 yards in a minute and 12 seconds as Gullion found Johnny Burton for a 15-yard touchdown pass to give the Redstreaks a 7-0 lead with 10:48 in the first.

Starting at their own 20-yard line after a touchback kickoff by Piketon senior Brody Fuller, the Panthers drove to the Piketon 19-yard line.But the Redstreaks came away with their first of five takeaways, recovering a fumble and taking over with 4:53 to go in the first. The Redstreaks then drove 81 yards, as Gullion scored on a 1-yard run to give the Redstreaks a 13-0 lead with 3:39 left in the quarter — a score that was set up by a Chris Chandler 46-yard reception.

With 8:43 to go in the second quarter, Gullion scored his second rushing touchdown of the night to give Piketon a 19-0 lead. Camren Loar then intercepted a Southeastern pass on the next drive that helped set up an eventual Redstreak touchdown. Gullion then scored his third rushing touchdown of the game on a 2-yard scamper that gave the Redstreaks a 25-0 lead with 6:31 to go in the half. That was the score heading into the half.

“It was a great win with great team effort on offense, defense, and special teams,” said Piketon coach Tyler Gullion. “We tackled a lot better. We attacked tonight on defense; we didn’t sit and wait, offensively we did what we did. The protection was good. We took what they gave us.”

On the first drive of the second half, Southeastern scored on a Mikey Nusser 20-yard touchdown run to cut the Piketon lead to 25-8 with 7:09 to play in the third. Piketon then answered on the next drive as Gullion found Burton from 14 yards out for his second touchdown reception of the night making it 32-8 with 4:39 to go in the third.

With 11:52 to go in the game Southeastern made it a 32-16 ballgame as Nusser found the end zone once again for the Panthers. Gullion then scored his fourth rushing touchdown at the 10:41 mark before Jayden Thacker scored the final touchdown of the evening at the 5:25 mark to give the Redstreaks a 46-16 win over the Panthers.

Along with 4 rushing and 2 passing touchdowns, Gullion was 24-of-34 passing for 369 yards and rushed for 49 more. Burton caught 9 passes for 123 yards and 2 touchdowns. Chris Chandler caught 8 passes for 148 yards, while Brody Fuller had 3 receptions for 28 yards. Camren Loar finished the night with 45 receiving yards. Jayden Thacker ran for 50 yards and a touchdown on 5 carries.

Both Southeastern and Piketon gained 15 first downs. The Streaks won the turnover battle 5-1. Piketon was penalized 12 times for 100 yards while the Panthers were penalized 7 times for 56 yards.

The Redstreaks get back into action next Friday as they travel to Frankfort and face Adena.

“We’re a good football team, but we didn’t play as a team those first two weeks and tonight we did. Our kicking game was good,” said Gullion. “I am just proud of our young men — one brick at a time, one practice at time, one play at a time. Just don’t look too far ahead; take it day to day, and we’ll be ready to go.”