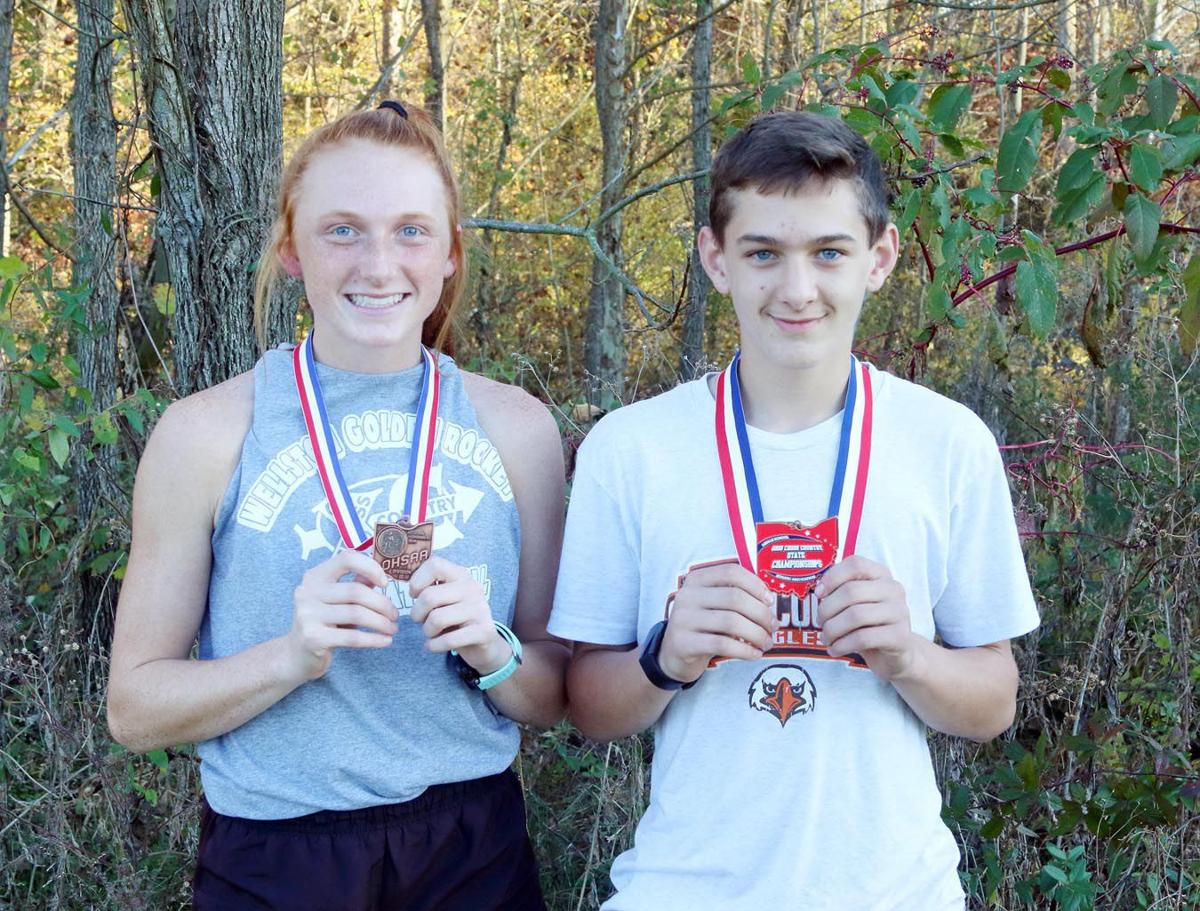 Eastern sophomore Abby Cochenour and eight-grader Teagan Werner show off their latest hardware. Cochenour is holding her medal from the Division III regional cross country race where she finished seventh to advance to this week’s state meet. Werner is holding his first-place medal from winning the Ohio Middle School Division III championship. 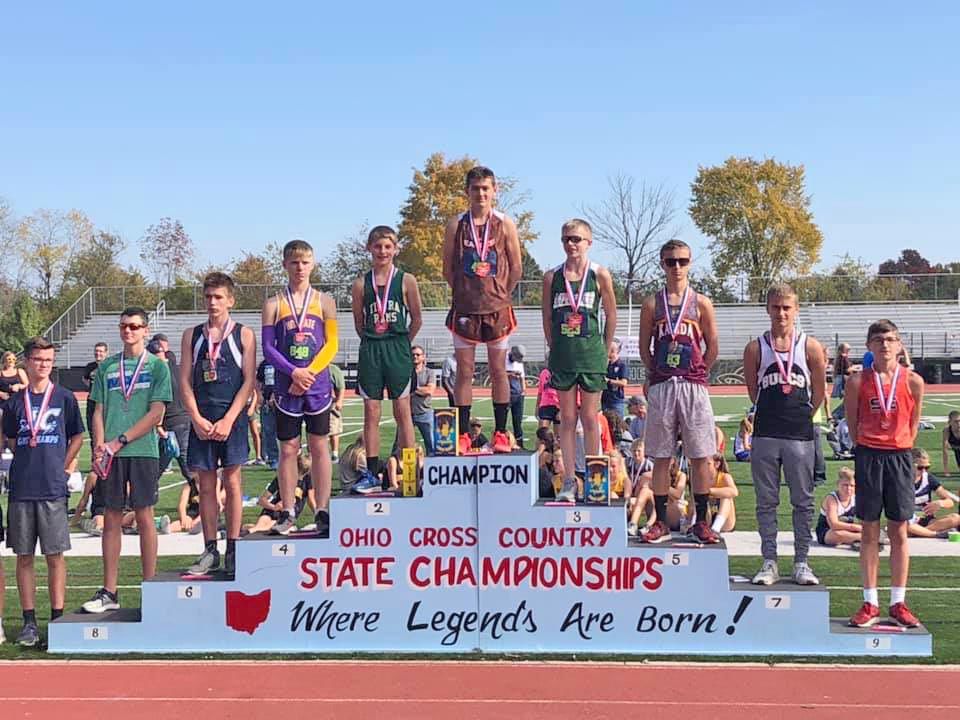 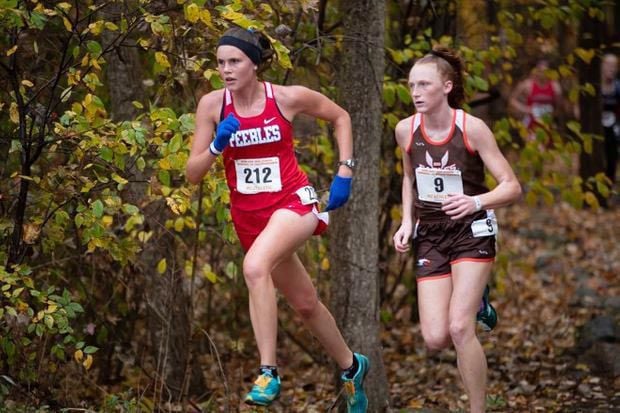 Eastern sophomore Abby Cochenour works to keep up with Peebles sophomore Katy Seas in the woods as the two approach the finish of the Division III regional cross country race at Pickerington. 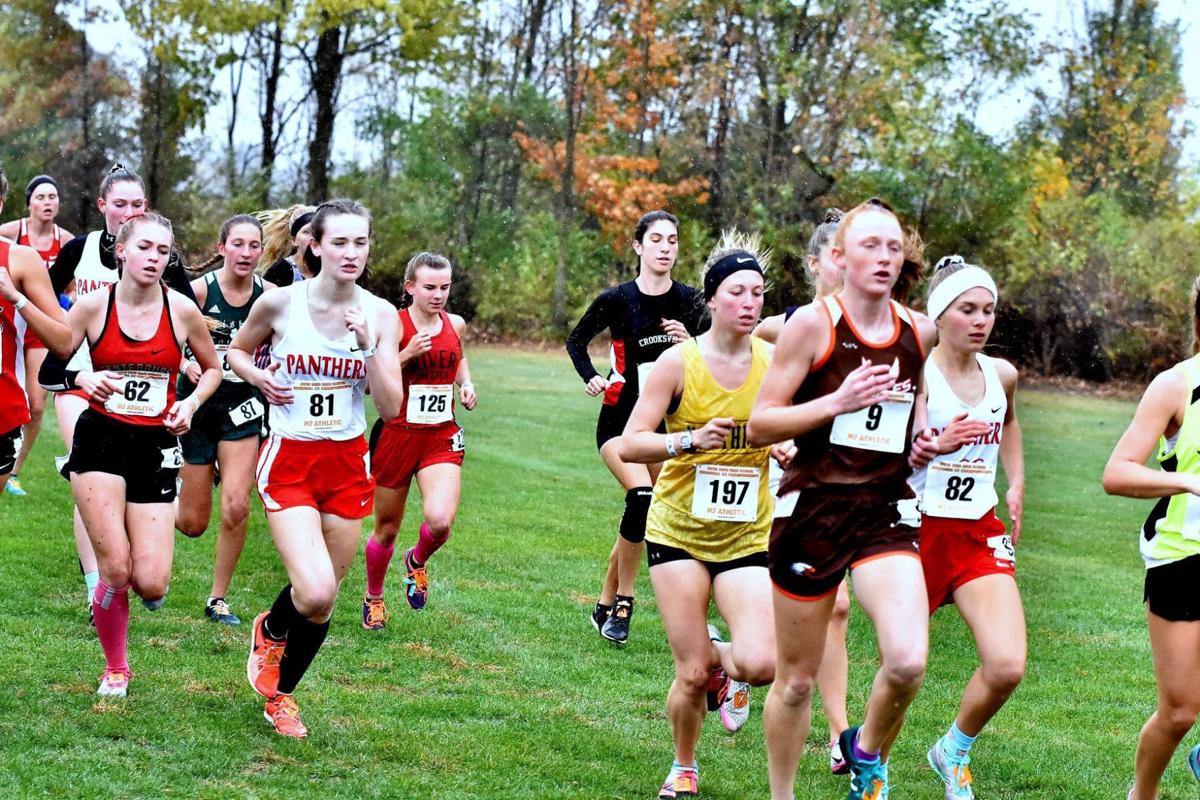 Eastern sophomore Abby Cochenour runs near the front of the pack in the early portion of the Division III regional cross country race at Pickerington North on Saturday, Oct. 26.

Eastern sophomore Abby Cochenour and eight-grader Teagan Werner show off their latest hardware. Cochenour is holding her medal from the Division III regional cross country race where she finished seventh to advance to this week’s state meet. Werner is holding his first-place medal from winning the Ohio Middle School Division III championship.

Eastern sophomore Abby Cochenour works to keep up with Peebles sophomore Katy Seas in the woods as the two approach the finish of the Division III regional cross country race at Pickerington.

Eastern sophomore Abby Cochenour runs near the front of the pack in the early portion of the Division III regional cross country race at Pickerington North on Saturday, Oct. 26.

With Leist graduating and moving on to Kentucky Christian University to continue his running career, Cochenour, now a sophomore, has been elevated to the lead role. But she isn’t alone, as eighth-grader Teagan Werner has turned in an incredible season, leading up to winning the Ohio Middle School Division III cross country championship.

A lot of history has been made for the Eastern cross country program in the past two years. With the young talent on the team, expectations are high for the coming seasons.

While the junior high Eagles finished their 2019 season with Werner winning the first state athletic championship in Eastern history, Cochenour still has one more race ahead at state. Needing to finish in the top 20 of the Division III regional race at Pickerington North on Saturday morning, Oct. 26, Cochenour crossed the line seventh in 19:40.3 to secure her place at the upcoming Division III state cross country meet at National Trail Raceway on Saturday, Nov. 2. It will be her first trip to state.

On Monday evening, Oct. 28, before Cochenour and Coach Corey Culbertson began their evening practice session, they took time to talk about the successes and accomplishments so far. Werner also came to join the discussion.

Cochenour had a big mental hurdle to clear in the regional meet. After qualifying for the regional last year as a freshman, Cochenour had to drop out of the race near the two-mile mark to an Achilles injury she suffered in the district meet on the previous Saturday.

Strategically, Coach Culbertson had the Eagles run in the Pickerington North Invitational to start the 2019 season on Saturday, Aug. 24. There Cochenour had an outstanding day, breaking her own school record of 20:30 by running the Pickerington course in a time of 20:08 with a fifth-place finish.

“Abby needed to overcome and conquer the course,” said Culbertson. “We needed her to have a positive experience there before this year’s regional race.”

Werner began his strong season at Pickerington North as well, producing a win in a personal best time of 11:31. That was just the beginning of what ended up being an all-around very strong season for the Eastern cross country program.

The confidence gained led to another school record for Cochenour at the Circleville Kiwanis meet the following week, as she improved upon her school record set the previous week by 34 seconds, finishing in 19:34 to win the race.

Cochenour continued winning or placing near the top of every race throughout the season. At the junior high level, Werner was doing the same.

Then came the district for the high school runners on Saturday, Oct. 19, where Cochenour ran her way to a third-place finish in the Division III girls competition at Rio Grande, finishing in 20:29.87 to secure her place at the regional competition for the second straight year.

In order to advance to state, Cochenour needed to complete the regional in the top 20. To do so, she had to battle chilly temperatures, a wet course, and some rain. Cochenour mentally and physically conquered the regional race by recording seventh place in a time of 19:40.3.

“I think I ran my strongest mile in a race,” said Cochenour, talking about her day at the regional meet. “The Mt. Gilead girls were there. I knew they were elite runners and I was ahead of them early, so I dropped back. I just tried to stay with the lead pack. Katy Seas from Peebles was also there. She’s a good runner and I’ve raced against her before. I tried to latch onto her and keep her ahead of me. We were together in the woods (near the end of the course).”

Cochenour’s school record is 19:34, which she set at Circleville on Aug. 31, one week after setting it at 20:08 in the opener at Pickerington North.

“She ran the Pickerington course 28 seconds faster (19:40 in the regional) in lousy conditions,” said Culbertson.

The biggest change from last year to this year was summer miles, which has made a difference. Cochenour said she trained harder and stretched more, leading to better performances. Her best times have come in the most competitive races where she may not have been first, but she was setting herself up to battle against runners, like the Saturday Night Lights elite race in Centerville.

Culbertson, who loves crunching numbers and studying times of runners across the state of Ohio, feels Cochenour has a very good chance of a high finish at the state cross country meet.

The state race is set for 11 a.m. on Saturday, Nov. 2 at National Trail Raceway in Hebron.

Like Cochenour, Teagan Werner has turned in his best performances when he has faced strong competition.

Werner, the lone eighth grader on the junior high boys team for the Eagles, has enjoyed a very successful season leading up to his individual state championship.

The Eagles all competed at the Ohio Middle School championships at Dublin Jerome High School in Dublin on Sunday, Oct. 20. There they finished eighth as a team.

Werner ran the course in 11:01.51 to secure the championship, almost five seconds ahead of runner-up Paul Westrick of Tinora Junior High (11:06.20). Jacob Barnhart of Findlay St. Michaels was third in 11:14.78.

When the Eagles arrived at the Middle School Championships, they kept hearing about “Heartbreak Hill” as being a challenging section of the course. But it was nothing compared to the hills of Southern Ohio.

“It wasn’t much of anything,” said Werner. “It only took me about three steps to get up it.”

“It was more like what we would call a bump around here,” added Culbertson.

Werner was strategic in his approach to the state race. He kept himself with the lead pack and began passing runners, eventually establishing his place as one of the top three. When the runners approached the final 500 meters, Werner made his move.

“I passed him in the last 400-meters. I had more juice left than he did,” said Werner of the second-place runner.

That runner had worked so hard to keep up with Werner that his legs gave out on him. He fell near the finish, but was able to get up and cross the line.

The win capped an outstanding season for Werner, who won every race he ran this fall, except for one at Circleville. That performance comes after running just a handful of races last year due to battling allergies and illnesses. As a seventh grader, his lone win came at Minford. He won that race in 12:27 that year. This year, Werner won it in 11:16.

Werner enjoys everything about the sport.

“Running is so freeing. It helps you get any stress you have off of your mind,” said Werner.

Having competition in front of him make him work even harder. “I just keep working to pick the runners off ahead of me one at a time,” he said. “You definitely don’t get bored.”

The Eagles have been trying to have a weekly practice session at Lake Katharine State Nature Preserve, located about 12 miles east of the school on Beaver Pike. The preserve’s loops and trails are among Werner’s favorites.

“I love running in the woods. You feel like you are flying with all of the leaves and trees going past on the trail,” he said. “You just have to make sure you avoid the rocks.”

“Lots of history has been made,” said Culbertson. “Teagan is the first state champion in school history.”

Werner will be the only Eagle moving up to the high school team next year, since the rest of the junior high runners are seventh graders. But his younger brother Aiden Werner, a sixth-grader who placed ninth (12:19.74) in the state race for boys in sixth grade and younger, looks to contribute to the already successful junior high team season.

The focus for the remainder of the week will be Cochenour, who hopes to make her mark and achieve All-Ohio status in her first-ever state cross country meet on Saturday at 11 a.m.