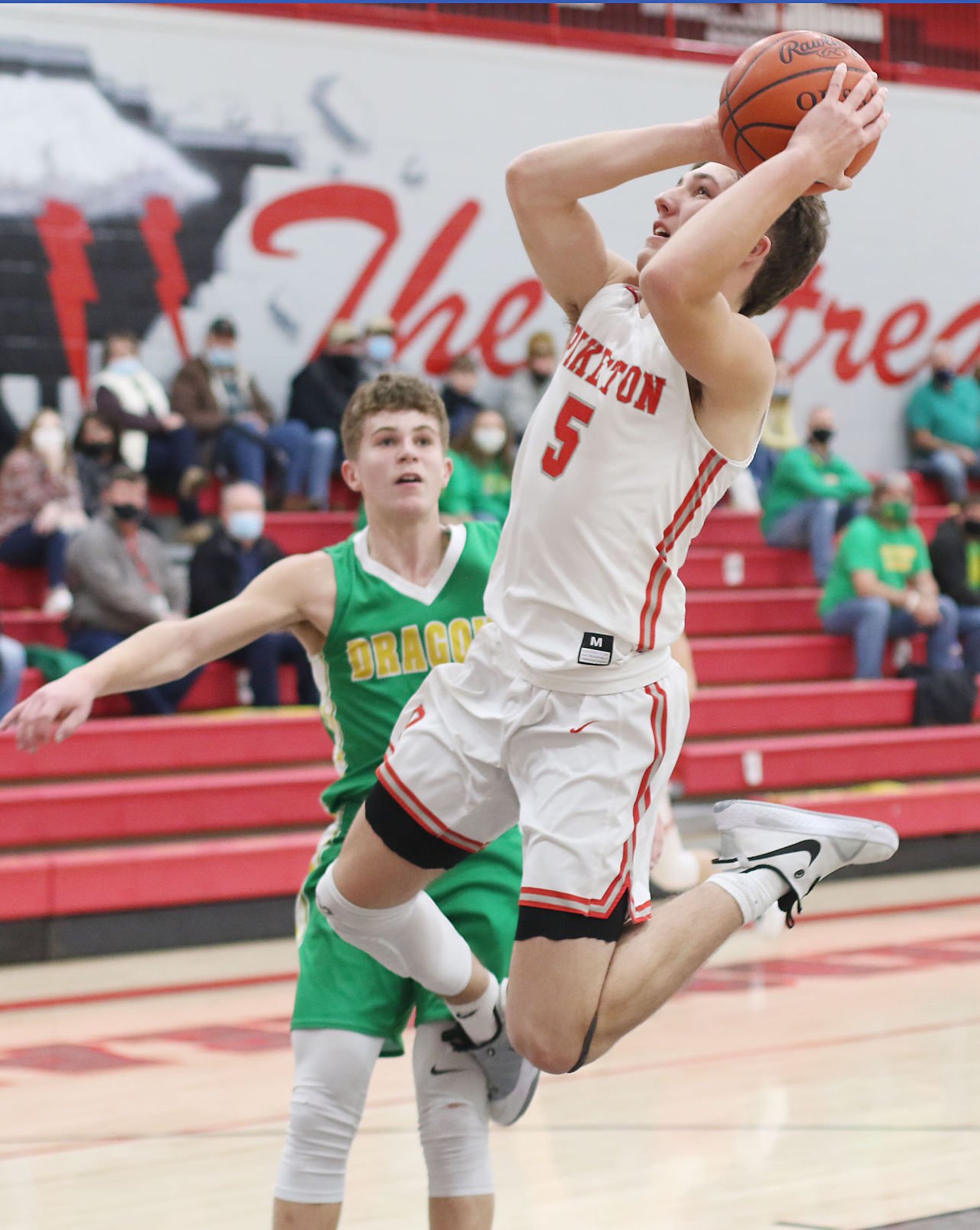 Piketon’s Tra Swayne goes to the air to get past a West Union defender for a shot attempt in the opening half of Monday night’s sectional semifinal basketball game. 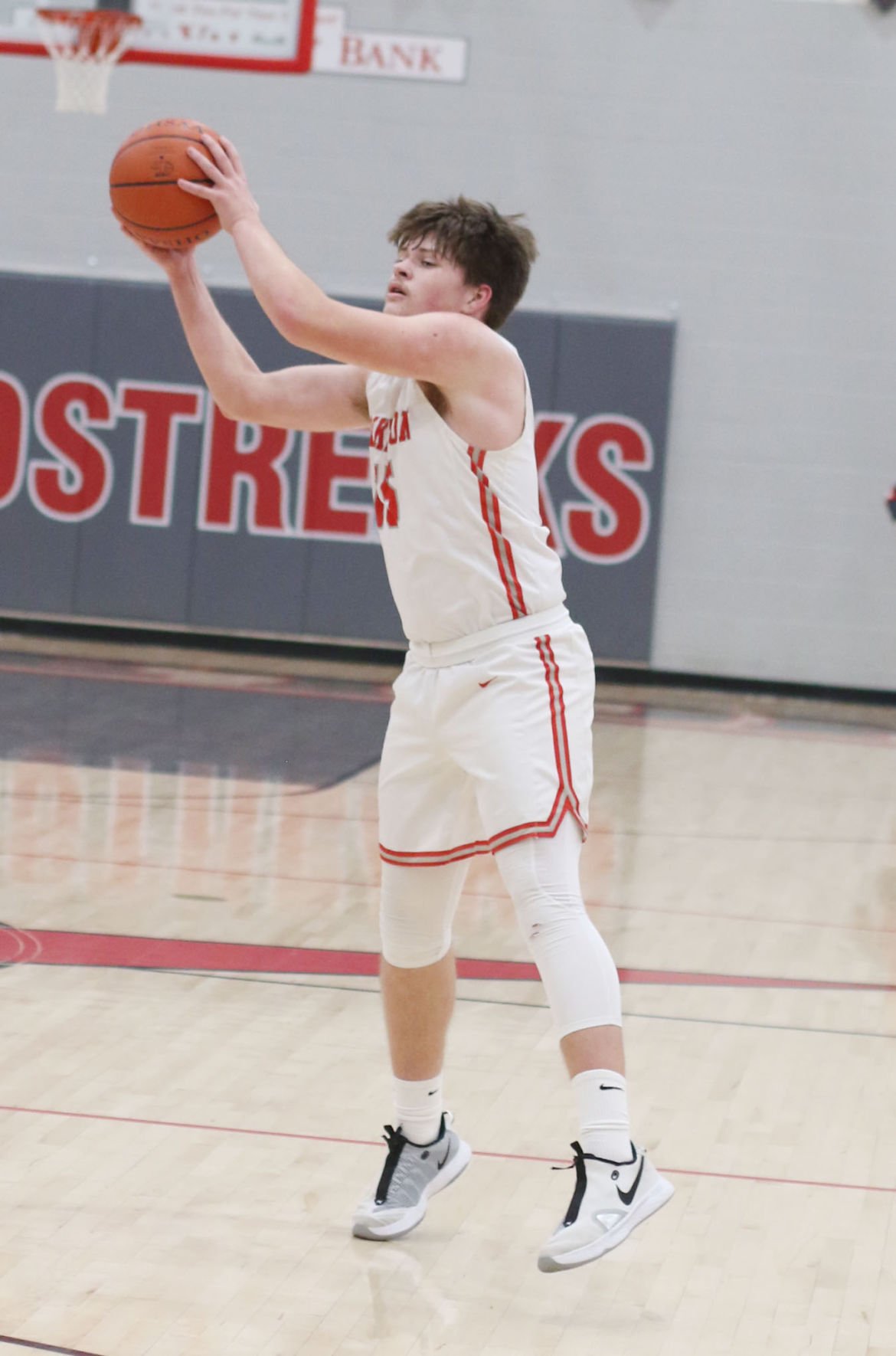 Piketon junior Kydan Potts catches a pass from a teammate as the Redstreaks move the ball around in the opening half of Monday's sectional semifinal win.

Piketon’s Tra Swayne goes to the air to get past a West Union defender for a shot attempt in the opening half of Monday night’s sectional semifinal basketball game.

Piketon junior Kydan Potts catches a pass from a teammate as the Redstreaks move the ball around in the opening half of Monday's sectional semifinal win.

It was a fast start and a strong start for the Piketon Redstreaks Monday evening as they dominated the visiting West Union Dragons in a Division III sectional semifinal game with a 57-19 conquest.

The Redstreaks scored on the opening possession on a drive from senior Chris Chandler, sparking a 12-0 run. Levi Gullion had the next basket following a Dragon turnover. Then Gullion and Chandler each hit from outside the arc before Chandler capped it with another drive. Those two combined to score eight more points before the quarter came to an end. Chandler added six on a pair of three-pointers, while Gullion had another bucket. Heading to the second quarter, the Redstreaks led 20-8.

After all of the speed and energy in the opening quarter, the Redstreaks suffered a lull in the second frame. But they still had enough in the tank to limit the Dragons to one basket during the eight-minute stretch, while forcing nine turnovers. Piketon senior Brody Fuller had the first bucket, moving the lead to 22-8. West Union’s only bucket followed. Chandler had a basket for Piketon at the midpoint of the quarter and later added a free throw with less than two minutes to go. That made Piketon’s lead 25-10 at the break.

“In the first quarter, we had great energy and enthusiasm. The guys hadn’t played since last Friday (Feb. 12), so it was a bit of a break. I think that showed up in the second quarter for us and for West Union. West Union got on the offensive glass and started getting loose balls, which deflated us a little bit,” said Piketon coach Kyle Miller.

The Dragons scored first to open the third quarter. Then the Redstreaks produced the next 22 points over a six-minute span. Chandler started the run. Then Swayne cashed in on a turnover for an old-fashioned three-point play, increasing the lead to 30-12. After a brief lull, Chandler restarted the scoring with a trifecta. The next West Union turnover led to a three-point play for Gullion. Then Sawyer Pendleton got into the action, scoring on a drive and extending the advantage to 38-12. Next, Fuller connected from long range. Gullion followed with a point from the line, creating a 30-point margin, 42-12.

Over the final two minutes of the quarter, Pendleton had two more buckets, Swayne connected on a three-pointer, and Chandler had an additional free throw. Heading to the fourth quarter, the Streaks led 52-14.

Chandler scored five points early in the fourth quarter to cap the scoring. Piketon’s younger players had the opportunity to log minutes and finish out the 57-19 win.

“We were very unselfish. The basketball moved from spot to spot with pace,” said Miller. “Chris Chandler was obviously huge for us. Sawyer Pendleton was fantastic for us in the third quarter, giving us a spark and a couple of steals. Tra Swayne and K.P. (Kydan Potts) got their hands on the ball. It was fantastic and a good win for us.”

Now the Redstreaks will have the opportunity to play the sectional final on their home floor versus the Chesapeake Panthers, who won their sectional semifinal game over Westfall by a score of 54-53 to set up the clash. That game is scheduled for 7 p.m. Friday night. The Streaks improved to 17-5 with the win.