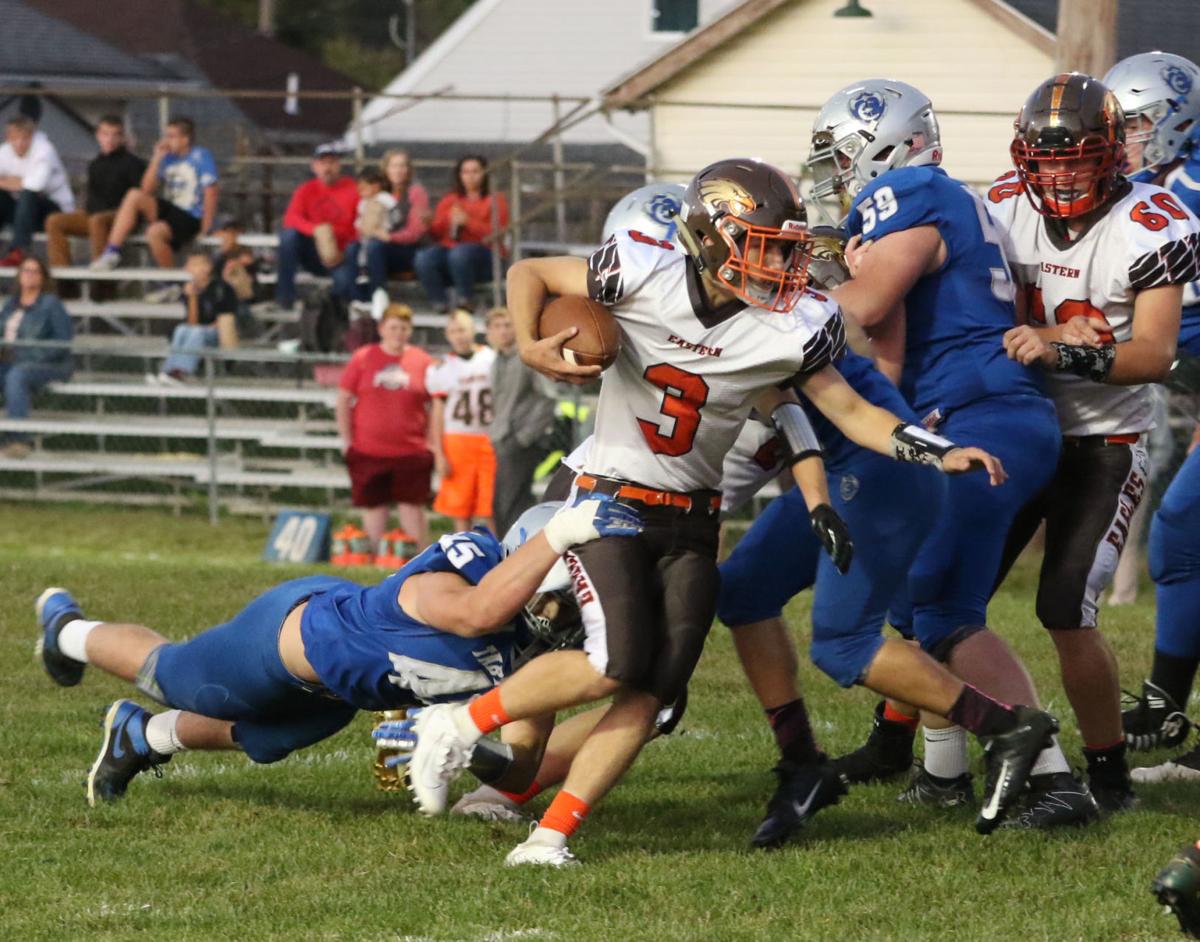 With Jake Tribby (60) and others providing blocking, Eastern quarterback Wyatt Hines (3) works to shake free of a defender during the early minutes of the game at Sciotoville East in the 2019 season. 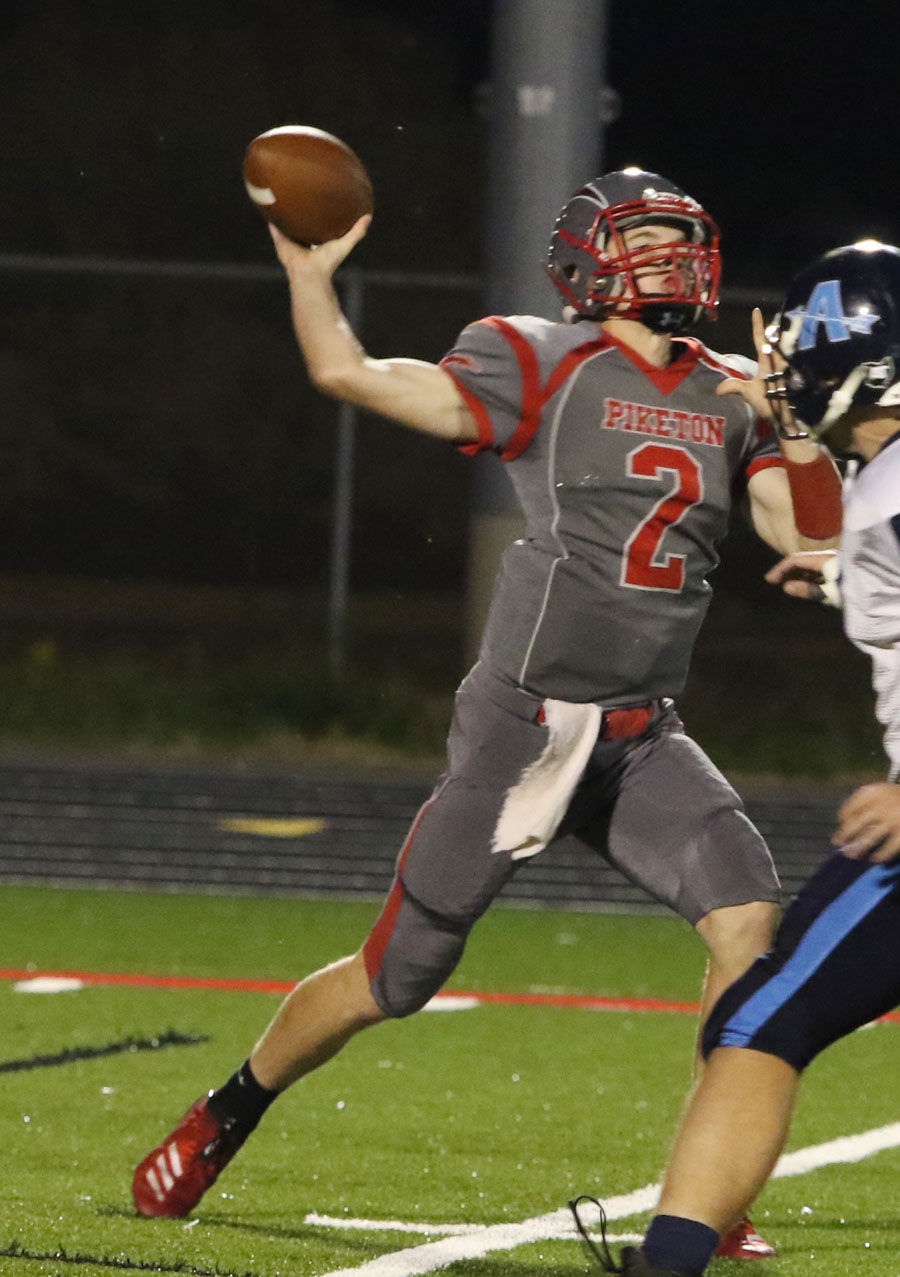 Piketon sophomore quarterback Levi Gullion prepares to unleash a long throw to one of his receivers as an Adena defender closes in on him during the homecoming game in 2019. 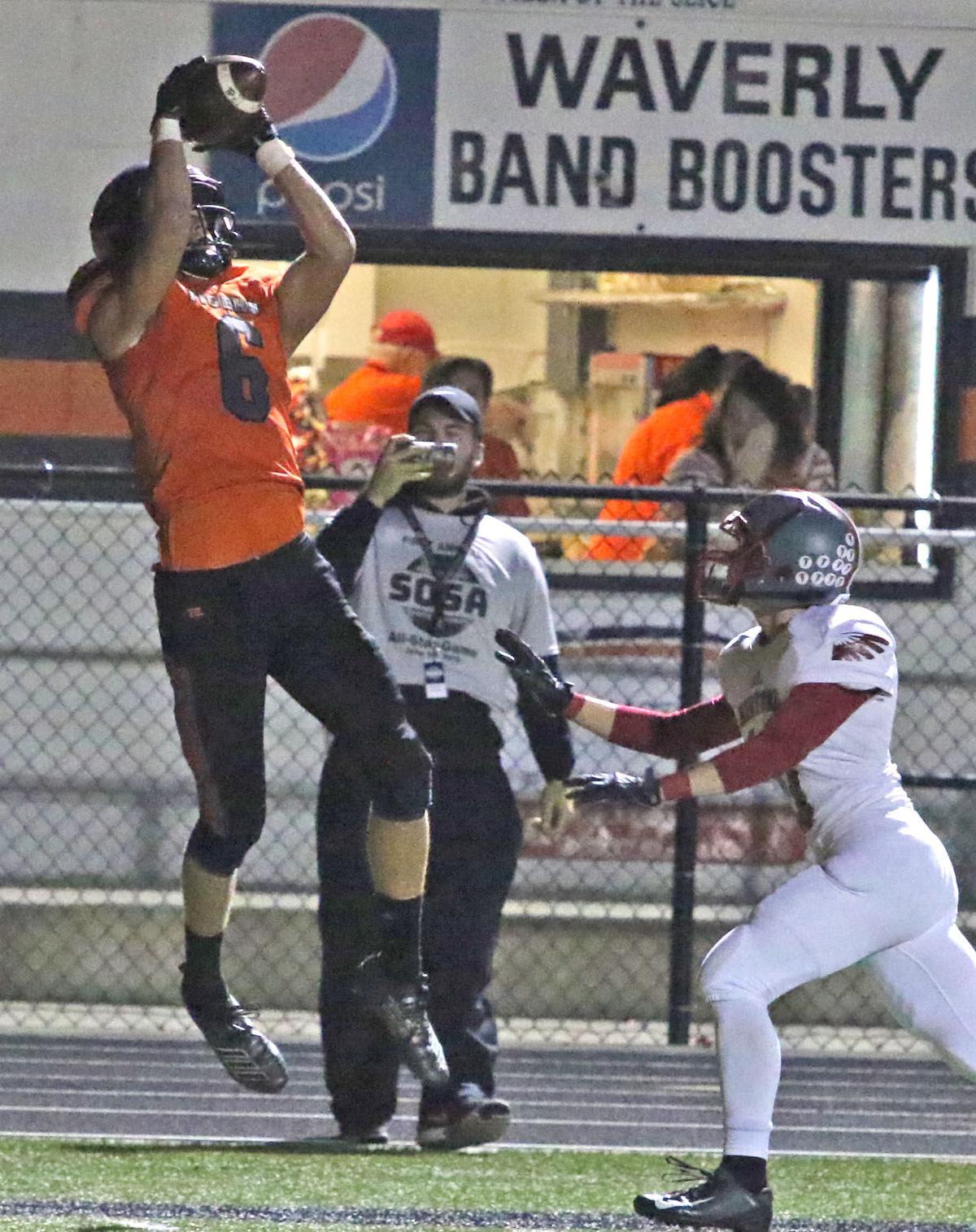 Waverly receiver Will Futhey makes a leaping catch of a pass from quarterback Haydn’ Shanks during the home game against Minford in 2019.

With Jake Tribby (60) and others providing blocking, Eastern quarterback Wyatt Hines (3) works to shake free of a defender during the early minutes of the game at Sciotoville East in the 2019 season.

Piketon sophomore quarterback Levi Gullion prepares to unleash a long throw to one of his receivers as an Adena defender closes in on him during the homecoming game in 2019.

Waverly receiver Will Futhey makes a leaping catch of a pass from quarterback Haydn’ Shanks during the home game against Minford in 2019.

During its May meeting Wednesday afternoon, the Ohio High School Athletic Association Board of Directors voted unanimously to expand the OHSAA football playoffs from eight schools per region to 12 beginning in the 2021 season. The 9-0 affirmative vote was given to a recommendation from the OHSAA staff, which was based on a proposal from the Ohio High School Football Coaches Association.

The expansion will increase the number of football playoff qualifiers from 224 to 336. Last year there were 709 schools in Ohio that played 11-man football. Football is the only OHSAA team sport in which not every school qualifies for the postseason.

“We still have details to work out regarding the format and specific season dates, but this vote by the Board gives us the green light to finalize those details for 2021,” said Beau Rugg, Senior Director of Officiating and Sport Management for the OHSAA and the Association’s football administrator. “We are thankful for the Board’s support on this proposal, which will bring all the great things of playoff football to 112 additional schools and communities.”

Rugg also noted that the football finals in 2021 are expected to end during the same weekend as previously scheduled (Dec. 2-5). Schools will still be permitted to play 10 regular-season contests.

The higher seeded teams will have the opportunity to host their playoff games during the first and second round of the playoffs.

Locally in Pike County, the reaction was mixed. In a document from the Ohio High School Football Coaches Association (OHSFCA) shared with the Pike County News Watchman, the rationale noted that the proposal would reduce the number of head-to-head impacts by reducing pre-season practice days from 25 to 18, thereby cutting out 14 practice sessions (two-a-days).

According to OHSFCA, the proposal does not extend the the current season by keeping the championship weekend at the same date and allows for a more equal number of practices for schools that start classes in early August. It would create more regular season match-ups with playoff implications.

It also allows four more teams per region “the opportunity to experience the thrill of being in the OHSAA football tournament.” Also, the 12-team expansion would allow teams ranked one through eight in the region the opportunity to host a playoff game with the result of bringing additional revenue to their schools for the athletic department and boosters clubs. More flexibility in scheduling may occur due to to the increased opportunity to make the playoffs.

“I have mixed feelings,” said Waverly coach Chris Crabtree, whose Tigers have qualified for the playoffs eight times in school history. “I think it was fine the way it was. I don’t really like the loss of preseason time, but it will give more teams an opportunity to have a playoff experience, which will be a good thing in the end.”

The Piketon Redstreaks have made the playoffs twice in program history. Like Waverly’s Chris Crabtree, Piketon coach Tyler Gullion also has mixed feelings.

“On one hand, it allows more opportunities for teams to get in and experience the playoffs,” said Gullion. “On the other hand, I don’t want the playoff system to be watered down. It should be a prestigious event that is unique. One of my former players looked (at the 12-team expansion) and said we would have gotten in four times in the past nine years.

Eastern High School, which has the newest varsity football program in Pike County, has not experienced the playoffs yet.

“For me, I think it is great,” said Eastern coach Scott Tomlison, who experienced the playoffs during his high school career at Waverly. “This is really about the kids. Allowing additional teams to go to the playoffs will reward some schools that play tough schedules and help get more teams involved from each region. Some schools in powerhouse conferences up north can’t make it with a 6-4 record, but they might now. And depending on how tough a region is, sometimes a 10-0 team won’t make it. This gives everyone more opportunities and should make the playoff games very competitive.”

The state of Ohio also announced this week that conditioning programs for football and other contact sports could resume at schools again, so long as social distancing and sanitizing requirements are followed. No training on school grounds has been allowed, since the state coronavirus/COVID-19 closure in mid-March. More information regarding school sports will be published when it is made known.