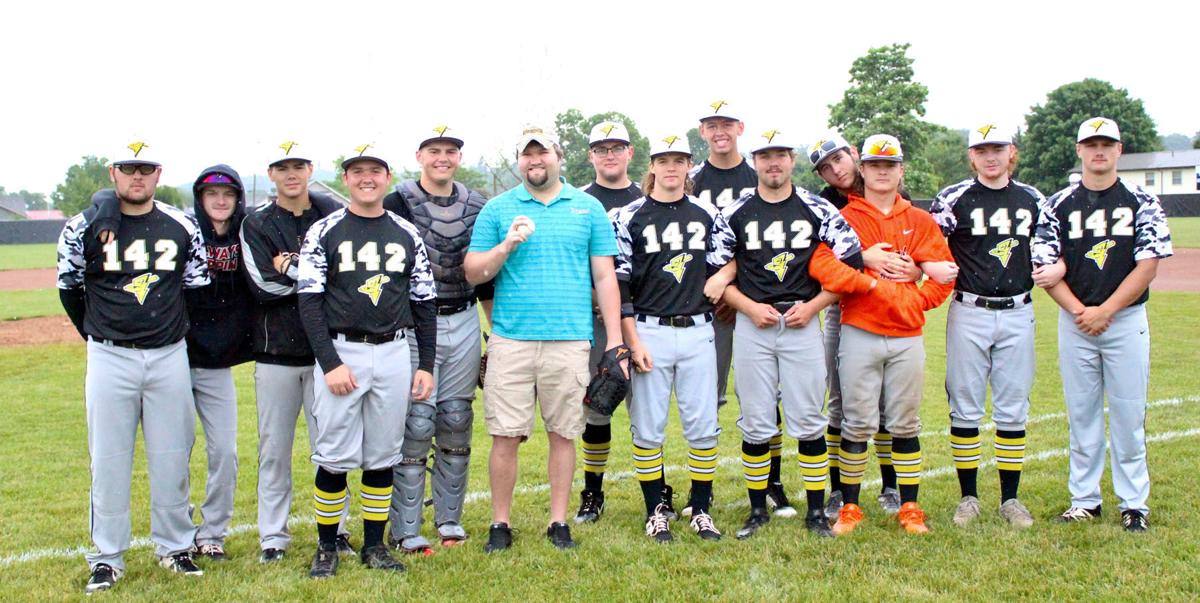 Davis Remy of Cardo’s Pizza in Waverly stands with the Waverly Post 142 Senior Shockers after throwing out a ceremonial first pitch on Sunday. 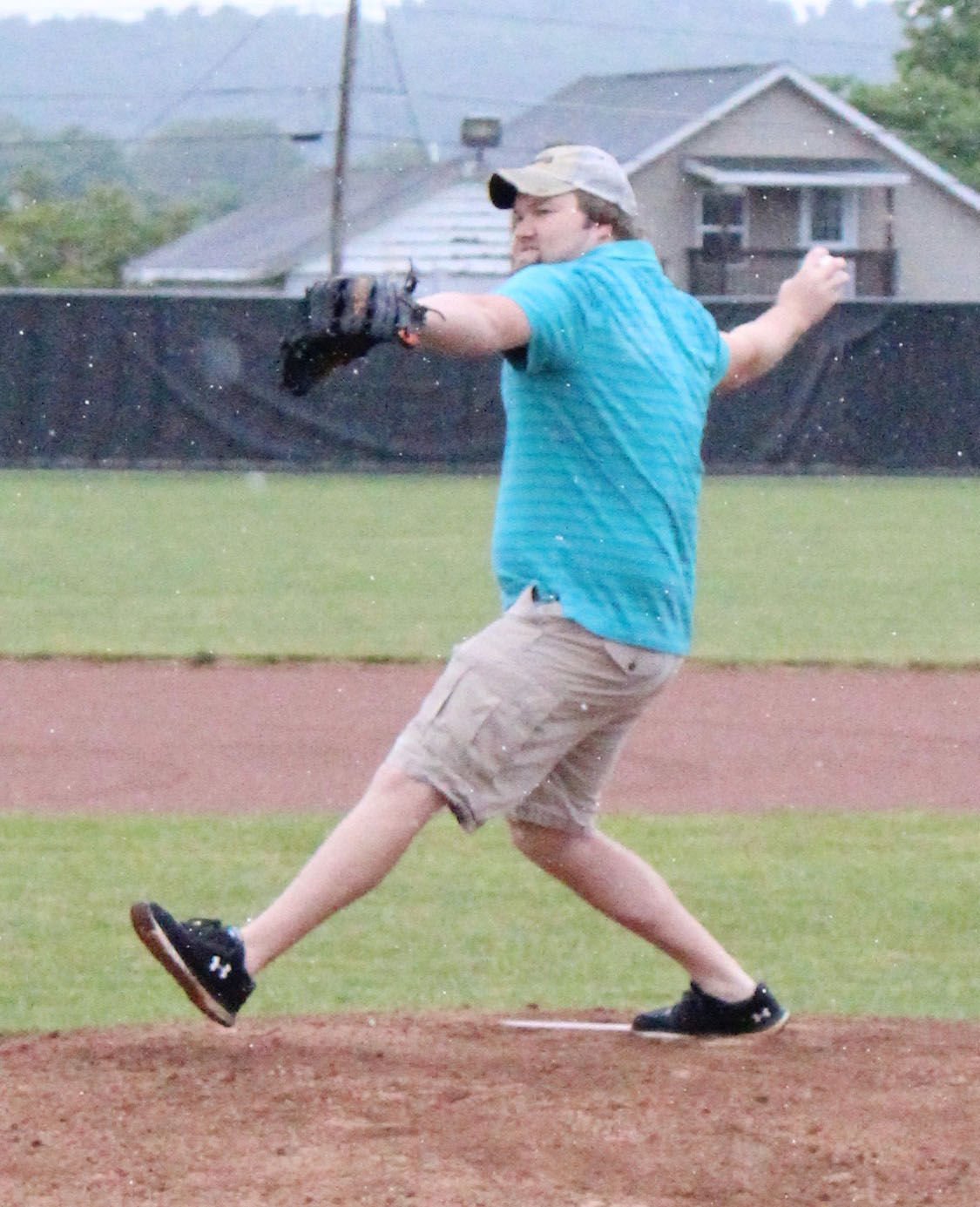 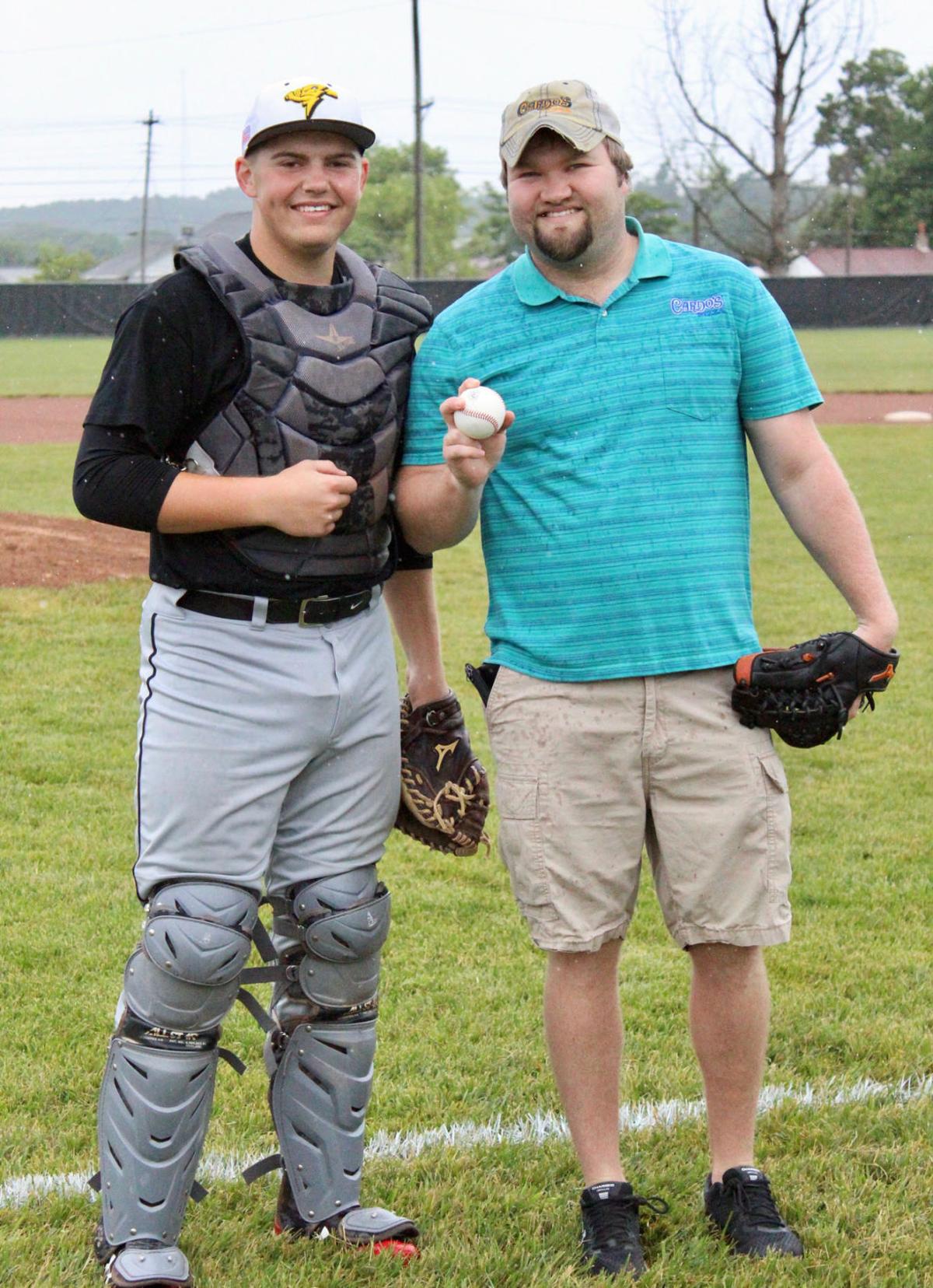 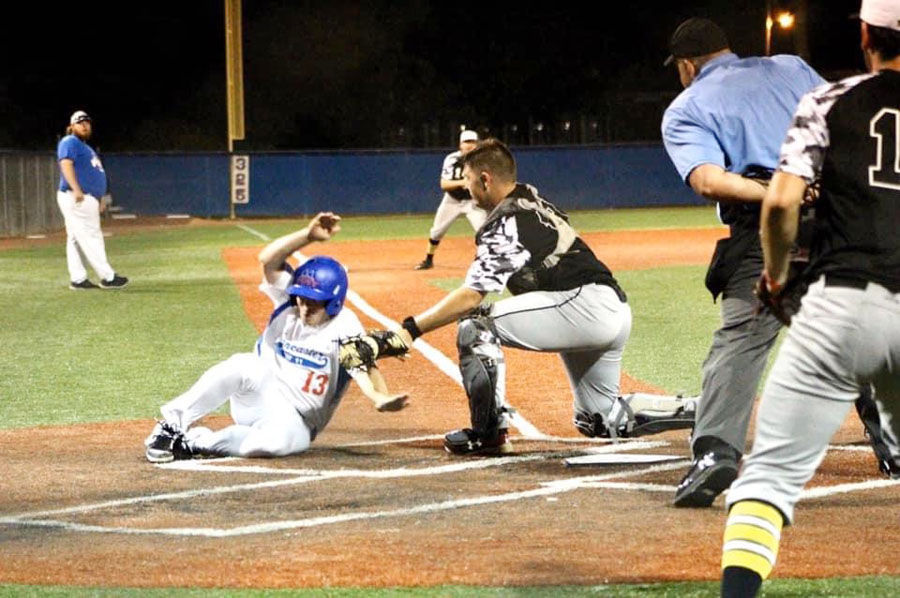 Using a strong throw from left fielder Michael Goodman, catcher Easton Lansing tags a Lancaster batter out at the plate during the second game of a double header at Beavers Field on Friday. 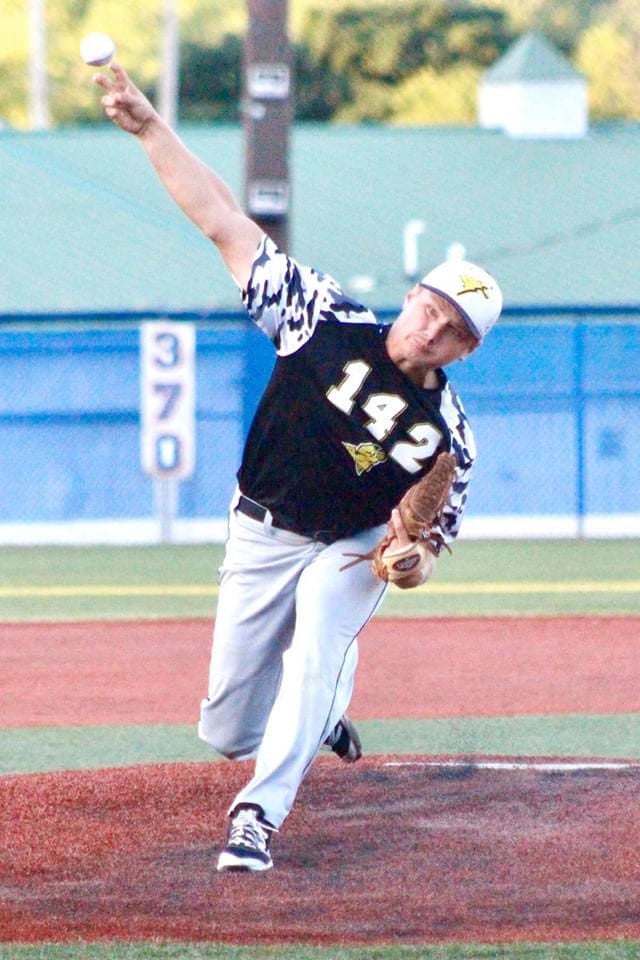 Lane Mettler delivers a pitch for Post 142 during the second game of Friday's double header at Beavers Field. 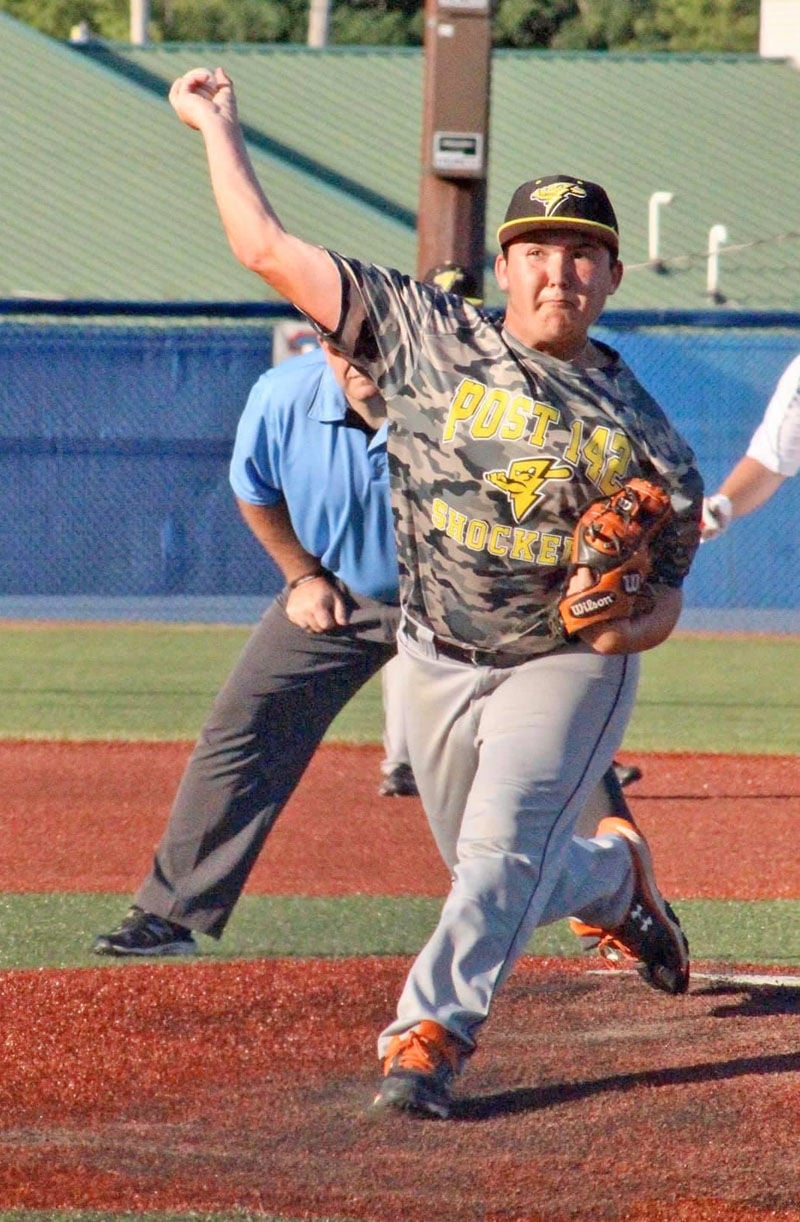 Ben Flanders pitches in relief during the opening game of a double header at Beavers Field on Friday night. 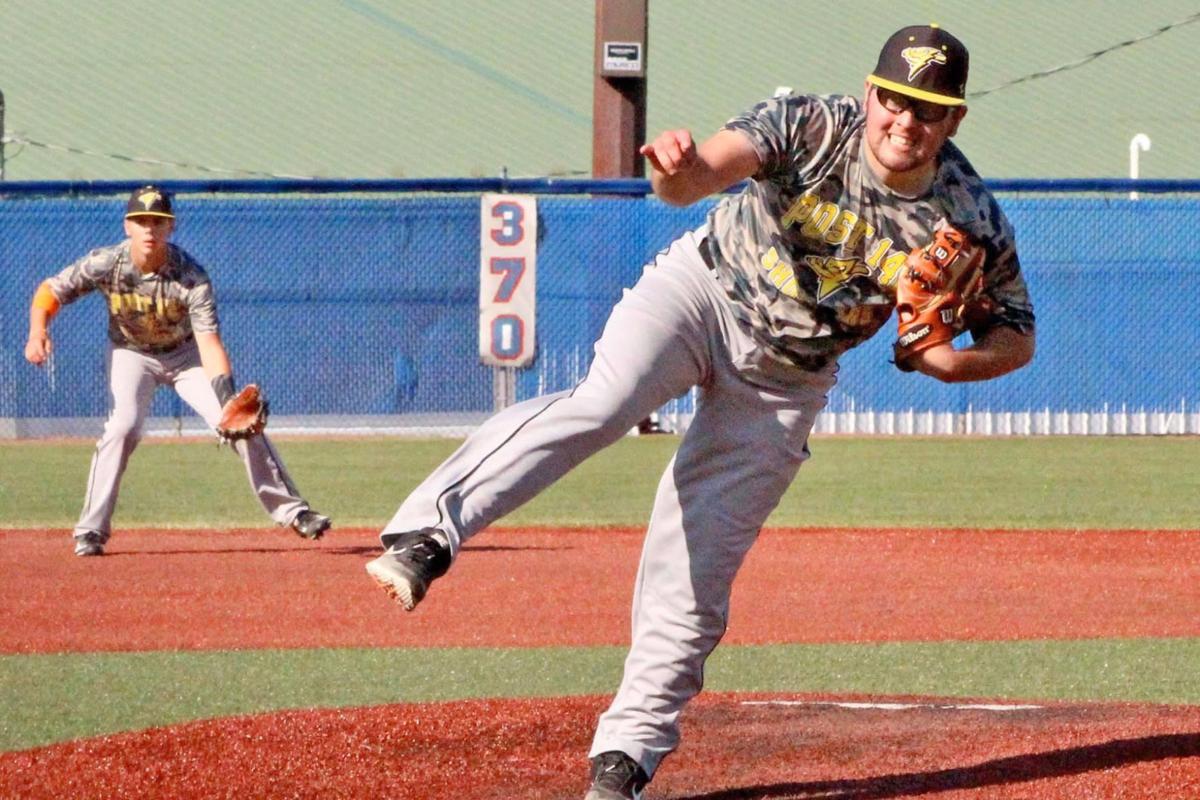 Derek Eblin fires a pitch toward the plate in the first game of Friday's double header against Lancaster Post 11 at Beavers Field.

Davis Remy of Cardo’s Pizza in Waverly stands with the Waverly Post 142 Senior Shockers after throwing out a ceremonial first pitch on Sunday.

Using a strong throw from left fielder Michael Goodman, catcher Easton Lansing tags a Lancaster batter out at the plate during the second game of a double header at Beavers Field on Friday.

Lane Mettler delivers a pitch for Post 142 during the second game of Friday's double header at Beavers Field.

Ben Flanders pitches in relief during the opening game of a double header at Beavers Field on Friday night.

Derek Eblin fires a pitch toward the plate in the first game of Friday's double header against Lancaster Post 11 at Beavers Field.

Splitting a double-header with Lancaster and following with a victory over Jackson, the Waverly Post 142 Senior Shockers have themselves off to a 2-1 start for the 2020 summer baseball season.

The Shockers traveled to Lancaster’s Beavers Field to battle Post 11 Friday evening in a double header that started during the daylight hours and ended under the lights. Waverly dropped the opener 10-1, but the Shockers bounced back in the nightcap to earn a 5-2 victory.

The 10-1 loss ended early as an eight-run rule was in play, bringing the contest to an end after five innings.

Lancaster struck first in the opening inning with an initial run, before unloading with seven more runs in second inning to go up 8-0.

The Shockers had the opportunity to crack the scoreboard in the top of the fourth inning when Logan Maynard came up with a one-out single and went to second on an outfield error. He took third base on a wild pitch and scored when Kannon Pack provided a sacrifice fly.

Post 11 added two more runs in the home half of the fourth inning by capitalizing on Post 142 pitching struggles, increasing the lead to 10-1. The Shockers tried to rally in the top of the fifth, filling the bases with walks drawn by Lane Mettler, J.T. Barnett and Carter Williams. But a final groundout ended the inning and game.

Maynard produced the only hit for Post 142 in the loss, going 1-for-2 from the plate. Derek Eblin started on the mound and suffered the loss. Levi Coriell and Ben Flanders finished in relief.

The second game was much better for the Shockers, resulting in a 5-2 win.

Post 142 scored the first five runs in the game, producing one in the second, another in the third, and three in the fourth to stake a 5-0 advantage. Post 11 attempted a late rally in the bottom of the seventh inning before the Senior Shockers made the plays to stop it and preserve the win.

The Senior Shockers threatened to score in the top of the first inning, before breaking through in the top of the second. Roger Woodruff led off with a single, went to second on a sacrifice bunt from Michael Goodman, and scored on another base hit from Easton Lansing.

In the third inning, Kannon Pack led off with a single, stole second and third, and scored on a single from Woodruff, making the advantage 2-0.

Then in the top of the fourth, Weston Roop started the offense with a leadoff single. Pack added another hit, and Eblin walked, filling the bases. Then Lane Mettler delivered a base-clearing double to score all three of them, opening a 5-0 lead.

Mettler also picked up the win on the mound, starting and throwing four innings with eight strikeouts and three walks. Roger Woodruff pitched the next two innings before Mason Ratcliff worked the final inning when Lancaster generated a pair of runs to make the score 5-2.

“It was nice to get back on the field and get a double header in. We had some rust to knock off in that first game. It was good to see our team bounce back and perform well the second game,” said Waverly Post 142 Senior Shockers Coach Jonathan Teeters.

“Lane was all you could ask for in his first outing. He came up with a big knock for us that really let him settle in on the mound. I’m excited to see where this summer takes us. We have a great bunch of young men on our squad.”

Offensively, Pack led the charge, going 3-for-4 with a pair of runs. Woodruff and Weston Roop each went 2-for-3, while Mettler was 1-for-3 with three RBIS. Easton Lansing also finished 1-for-2.

On Sunday, the Senior Shockers returned to action on their home field at Piketon High School to complete a suspended game against Post 81, featuring players from the Jackson and McArthur areas.

That game originally started on Wednesday, June 10, but it was suspended when a heavy storm made its way through the area. At the point the game was stopped, it was scoreless. When the teams resumed Sunday, some rain showers were still in the area. Ultimately, Post 142 took the win by a score of 5-3.

Prior to the restart, Davis Remy of Cardo’s Pizza in Waverly threw out a ceremonial first pitch.

“We appreciate Davis Remy and Cardo’s Pizza for their continued support of our program,” said Teeters.

The Shockers started the scoring in the bottom of the fourth inning. Kannon Pack started with a one-out walk before Derek Eblin blasted a home run to left field, creating a 2-0 lead instantly.

Three more runs came in the top of the fifth inning. Michael Goodman came up with a one-out single before Roop was hit by a pitch. Logan Maynard delivered the next hit. Goodman tried to make it home, but he was thrown out at the plate. Pack was up next, drawing a walk before Eblin did the same, pushing Roop home. Mettler was hit by a pitch, scoring Maynard. Then Woodruff walked and pushed Pack home, creating the 5-0 lead.

Leading the offense, Eblin finished 1-for-2 with a home run and three RBIs. Mettler was also 1-for-2 with an RBI, while Woodruff had the other RBI. Maynard was 1-for-3 with a run, and Goodman was 1-for-2.

Jacob Mathews picked up the win on the mound in five innings of work. He gave up just one hit, while striking out nine batters and walking five. J.T. Barnett worked the final two innings.

“Jacob, for his first outing, was what we wanted him to be. He pounded the zone and let his defense work,” said Teeters. “Derek came up with a big knock for us in the fourth to get us rolling.”

Waverly improved to 2-1 overall and was set to face Lancaster Post 11 at home Tuesday evening.