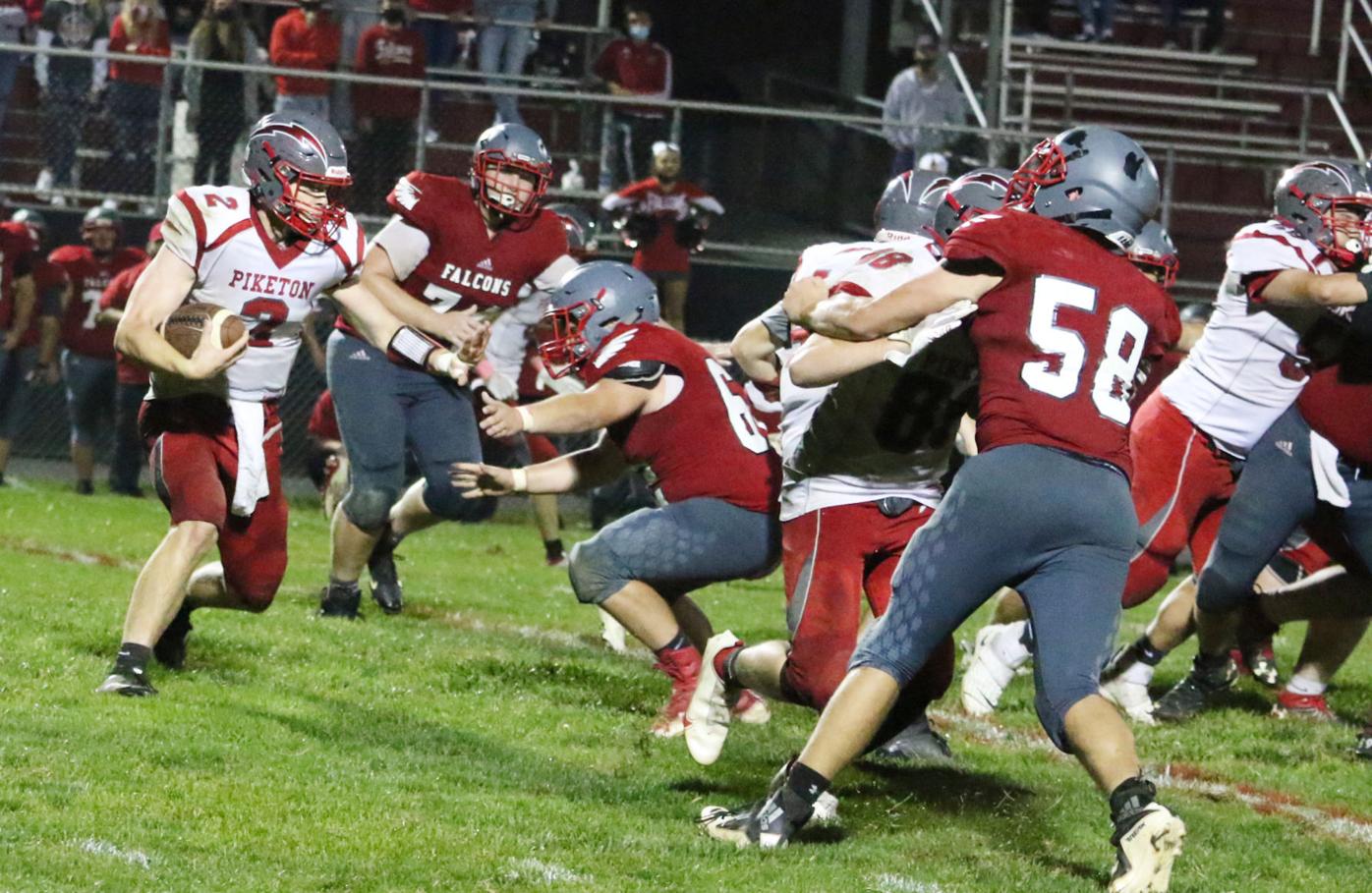 Redstreak quarterback Levi Gullion prepares to stiff-arm a defender and weave his way through holes created by blocking teammates to score on a 75-yard run during the fourth quarter of Piketon’s playoff win at Minford Saturday night. Gullion had 216 yards rushing and 5 touchdowns, along with 431 yards passing and 3 touchdowns. 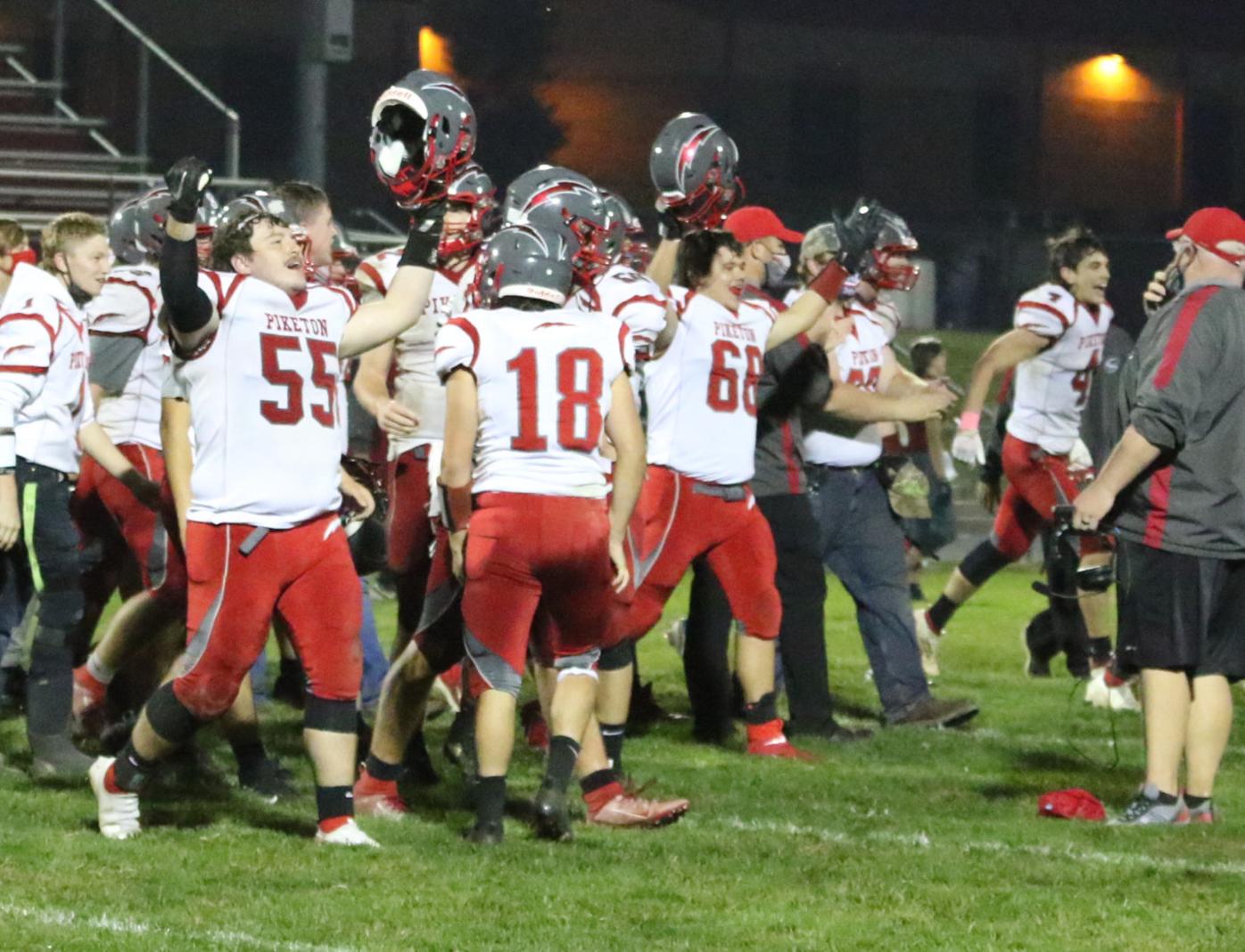 Redstreak quarterback Levi Gullion prepares to stiff-arm a defender and weave his way through holes created by blocking teammates to score on a 75-yard run during the fourth quarter of Piketon’s playoff win at Minford Saturday night. Gullion had 216 yards rushing and 5 touchdowns, along with 431 yards passing and 3 touchdowns.

It may be the month of October, instead of March, but there was madness in Muletown. As anticipated, Piketon and Minford were expected to score points and a lot of them. In all, 104 points were scored between the Redstreaks and Falcons, as Piketon won their second playoff game in school history, defeating Minford 53-51 in shootout fashion.

Minford started the game with the ball getting into Piketon territory but would have to punt, giving the Redstreaks possession at their own 4-yard line with 7:00 minutes to go in the first. The Redstreaks then went three-and-out on their first drive. Minford then returned the punt to inside Piketon territory to the 12, before Jeffery Pica put the Falcons on the board the next play on a 12-yard run to give Minford a 7-0 lead with 6:02 to go in the first. Piketon then evened the game at 7-7 when Levi Gullion hit Johnny Burton for a 36-yard score, capping off an 80 yard drive with 4:04 to go in the first.

Gullion and the Redstreaks then put together a three-minute and 36 second, 80-yard drive right before the half with Gullion scoring his second rushing touchdown of the night from 6 yards out to make it 34-20.

“(It was) just a great effort by our team. They never quit and never gave up. Our defensive and offensive line owe a lot of credit. (Quarterback) Levi (Gullion) had a lot of time, and then we got some pressure on them (the Minford offense) in the second half, which we didn’t get the first half,” said Redstreak head coach Tyler Gullion.

“Levi has a short term memory. He had some interceptions but he didn’t quit and just kept going,” said Coach Gullion.

After a good return by Minford on the kick, and two personal foul penalties on the Redstreaks, the Falcons took over at the Piketon 11 yard line. With their backs against the wall, the Redstreak defense held the Falcons to a field goal, as Minford extended their lead to 37-26 with 8:00 left in the third.

Piketon then had an answer on the next drive, as Gullion found Camren Loar for a 63-yard touchdown hookup with 6:28 to go in the third making the score 37-32. The next three possessions resulted in punts. Piketon would then take over at their own 20.

Minford once again came away with an interception before Elijah Vogelsong- Lewis scored from 4 yards out with 9.8 seconds left in the third to put the Falcons up 44-32.

“I made some bad decisions offensively, throwing three interceptions. That’s on me, and I have to improve on that. Our defense came to play that second half. We shut them out and shut them down,” said Piketon quarterback Levi Gullion.

With 9:17 left in the game Gullion scored from two yards out on 4th and goal, cutting the lead to 44-38. The Redstreaks then forced a Minford punt on the next possession, taking over at the 33 with 6:49 left in the game.

With 5:58 left to go in the game Gullion found Loar once again for a score giving the Redstreaks their first lead of the night 45-44. The Redstreaks then forced a punt once again on the next Falcon drive, taking over at their own 5-yard line.

“We shut the run game down in the second half. They were gashing us that first half. We went to a five-man line, and they did a great job. We kept fighting and kept working,” said Tyler Gullion.

Facing a 3rd-down-and-5, Gullion ripped off the longest play of the evening, going 75 yards to the end zone on a quarterback run and putting the Redstreaks up 53-44, after Burton completed the two-point conversion.

“I was like I have to get this. Nobody’s going to tackle me. I’m getting to the end zone. That was my mentality on that run,” said Levi Gullion.

Minford wasn’t done quite yet, as they scored with 1:16 left to go in the game making it 53-51. The Redstreaks were then able to milk the clock down to 15 seconds on the next drive. Minford had one last shot at the end zone, but the Redstreak defense was all over the Falcons, securing the victory and the second playoff win in school history.

“We’ll take it. They’re (Minford’s) a good program and a great team, and we’ll take that win,” said Tyler Gullion.

The stat sheet was loaded for the Redstreaks, as they had 663 yards of total offense. Gullion was 28-for-45, throwing for 431 yards and tossed 3 touchdowns. Gullion also led the Redstreaks in rushing with 216 yards on 27 carries, scoring 5 touchdowns. Jayden Thacker had 3 carries for 8 yards.

Camren Loar led the Redstreaks in receiving, as he caught 9 passes for 242 yards and a pair of touchdowns. Johnny Burton finished with 7 receptions for 82 yards and a touchdown. Brody Fuller caught 7 passes for 59 yards while Chris Chandler finished with 45 yards on 4 catches. Kydan Potts has a 4 yard catch.

The win is Piketon’s second playoff win in program history and first since 2012. The Redstreaks will now travel to Canal Winchester to take on Harvest Prep and face the Warriors Saturday with kickoff slated for 7 p.m.