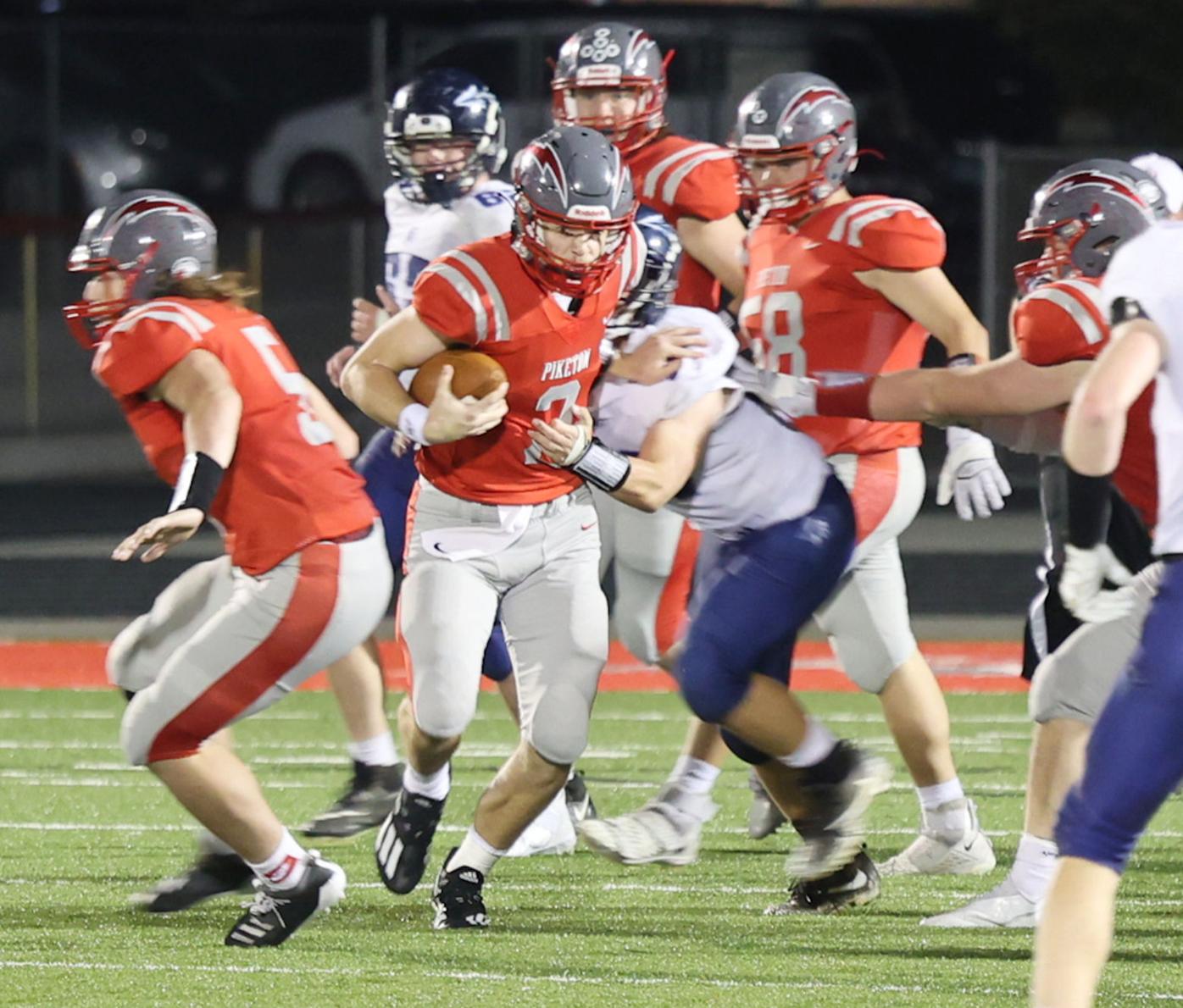 The Piketon Redstreaks picked up where they left off.

After taking a bye the week prior due to Southeastern being quarantined, Piketon welcomed the Adena Warriors on senior night Friday, Oct. 8. The Redstreaks rushed for 160 yards and threw for 196 yards as they defeated the Warriors 51-20.

“It’s a win. We took a week off, and it worried me to death. But we have players that make plays at key times. I love our guys. They did a good job tonight,” said Piketon coach Tyler Gullion.

“Defensively, especially in the second half, we shut them down. We put up 51 points, so (it is) just a great job by our young men getting after it and playing hard. We’ve been practicing well, so we just need to keep that up.”

Adena began the game with the ball, starting at their own 19-yard line. The Warriors picked up a pair of first downs moving the ball to midfield with 9:21 to go in the first. A long 37-yard pass play then gave the Warriors first-and-goal at the 8-yard line. Adena running back Nathan Dreitzler gave the Warriors an early 8-0 lead after he scored from six yards out with 7:40 to go in the opening quarter.

After the kick Piketon would start their drive at the Adena 47-yard line. It didn’t take long for the Redstreaks to find the end zone, as Levi Gullion connected with Johnny Burton for a 33-yard score on third-and-long to tie the game 8-8 with 6:30 left in the opening quarter.

Piketon then forced a three-and-out on Adena’s next drive, as they took over at the 37 with 5:06 in the first. Facing a 3rd-down-and-8, Gullion connected with Kydan Potts for a 27-yard touchdown, as the Redstreaks took a 16-8 lead with 3:54 to go in the first. The Piketon defense then forced a punt on the next Adena drive, but the Piketon drive stalled, as they were forced to punt giving the ball back to the Warriors with 44 seconds left in the first. Piketon would lead 16-8 at the end of the first quarter.

Adena called a timeout with 10:28 to go in the second quarter, as they faced a 4th-and-2 at their own 27. The Warriors aggressively went for it, but Zane Brownfield met the ball carrier in the backfield, stopping them short as the Redstreaks took over at the 22. Three plays later, Gullion hooked up with Potts for the second time from 10 yards out as Piketon took a 22-8 lead with 10:07 left in the half.

Adena answered Piketon’s touchdown with a score of their own. Gabe Stark scored from a yard out with 5:27 to go in the opening half, making it a 22-14 game. Johnny Burton then returned the ensuing kick for a big gain deep into Adena territory, but a pair of penalty flags negated it and Piketon started at their own 20. However, penalties would stall the Piketon drive as they would be forced to punt, as Adena took over at the 40 with 3:20 to go in the half.

“That’s the most penalties we’ve had all year. I don’t know why — a couple of holds and an unsportsmanlike. We lost our composure a little bit. We have to get back to what we’ve been doing and do those things the right way. That’s fixable, so we’ll correct that,” said Gullion.

Zane Brownfield then forced the first turnover of the night, as he came away with an interception on the ensuing Adena possession, giving the Redstreaks the ball at the 40 with 2:34 to play in the half. Two and a half minutes later, the Redstreaks found paydirt once again as Gullion threw his fourth touchdown of the half on an 18 yard strike to Camren Loar, giving them a 30-14 lead. The Redstreaks would take the 16 point lead to the intermission.

Piketon started the second half with the ball and scored quickly with 11:06 in the third. Gullion threw an 8-yard touchdown pass to Burton, as Piketon took a 38-14 lead early in the second half. Piketon and Adena then traded possessions, as the Warriors were forced to punt, and the Adena defense came away with an interception. Piketon then forced a punt on the ensuing Warrior drive. Braiden Dunham then blocked the punt, and the Redstreaks recovered at the 24 with 5:38 to go in the third.

The victory moves the Redstreaks to 7-0 overall and 4-0 in the Scioto Valley Conference.

Piketon moved the chains 17 times, while Adena moved them 13. The Redstreaks were 4-of-5 on two point conversions, while Adena was 1-of-2. Each team forced a turnover. Piketon was penalized 11 times for 101 yards, while the Warriors were penalized 10 times for 80 yards.

Next up, the Redstreaks will take the long trip to Williamsport, as they take on the Westfall Mustangs.

“Just one day at a time, one practice at a time, keep fighting and getting better. (We) can’t take anyone lightly ... just have to go out and do our job and execute.”