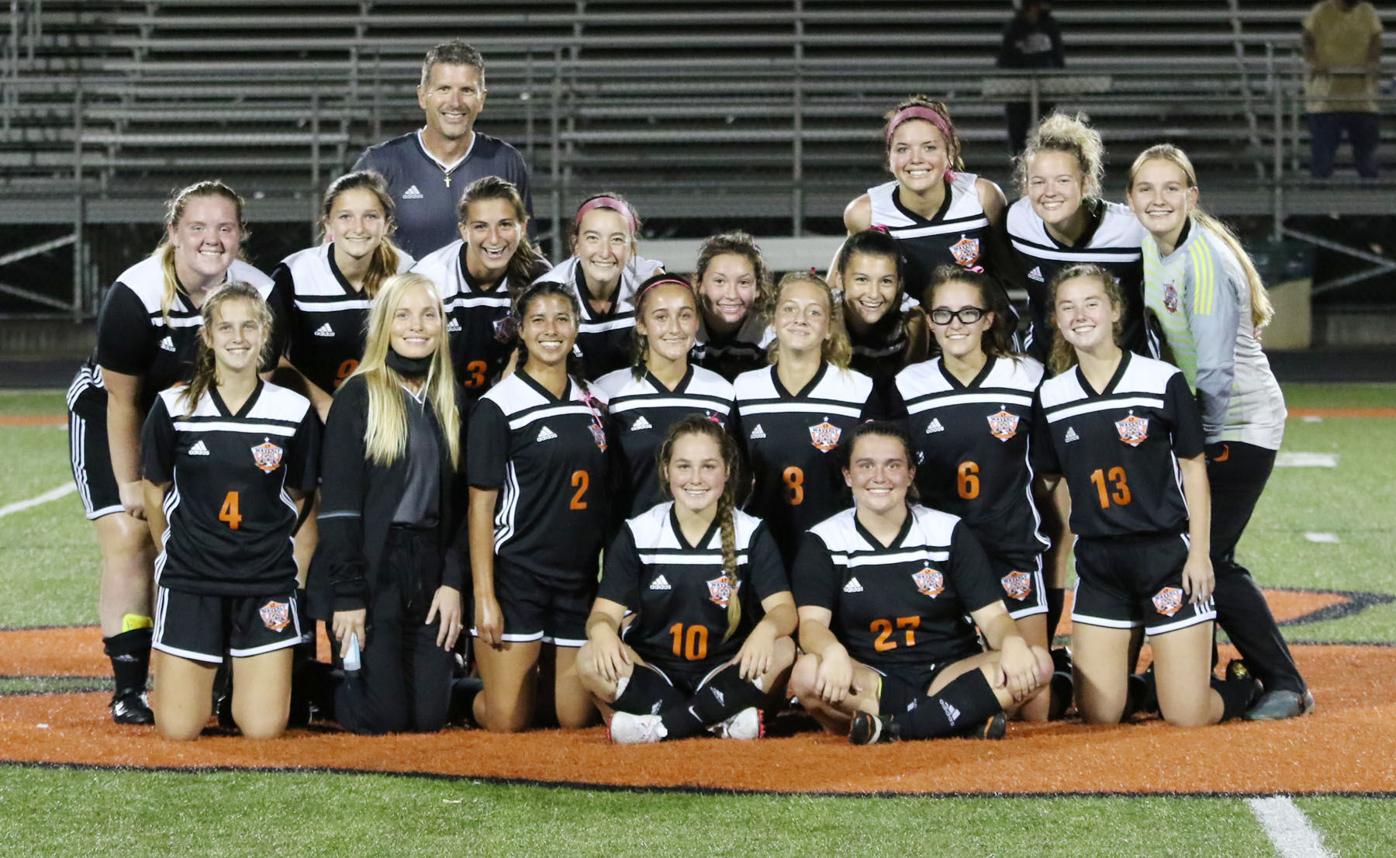 After winning over Portsmouth West to wrap up their first-ever outright Southern Ohio Conference soccer title, the Lady Tigers gathered on the paw at midfield for a group photo. 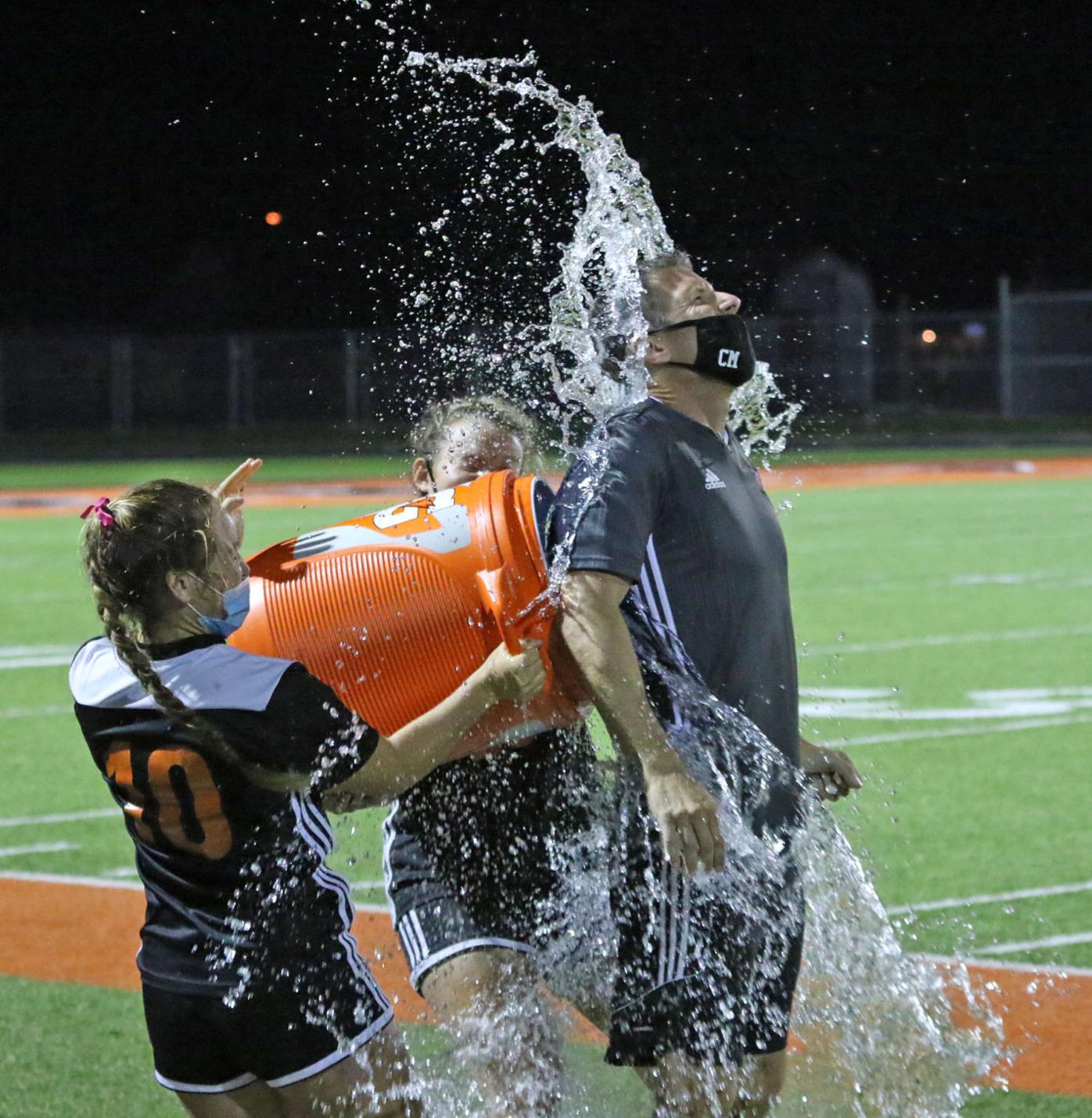 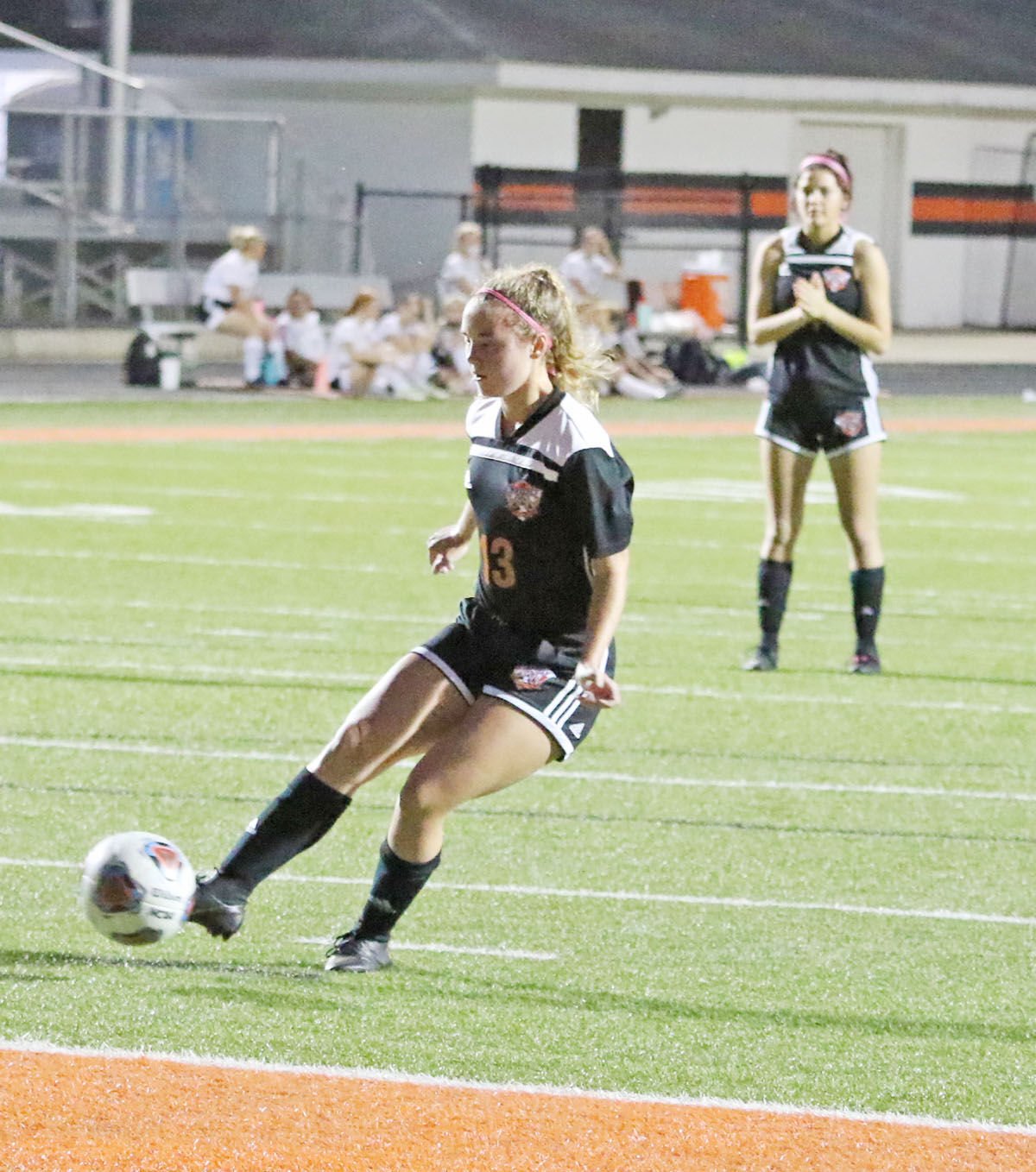 Waverly senior Loren Moran scored on a penalty kick with 18:53 left in the first half of Monday night’s 10-0 win over West. That goal gave Moran three for the night and 100 for her career. 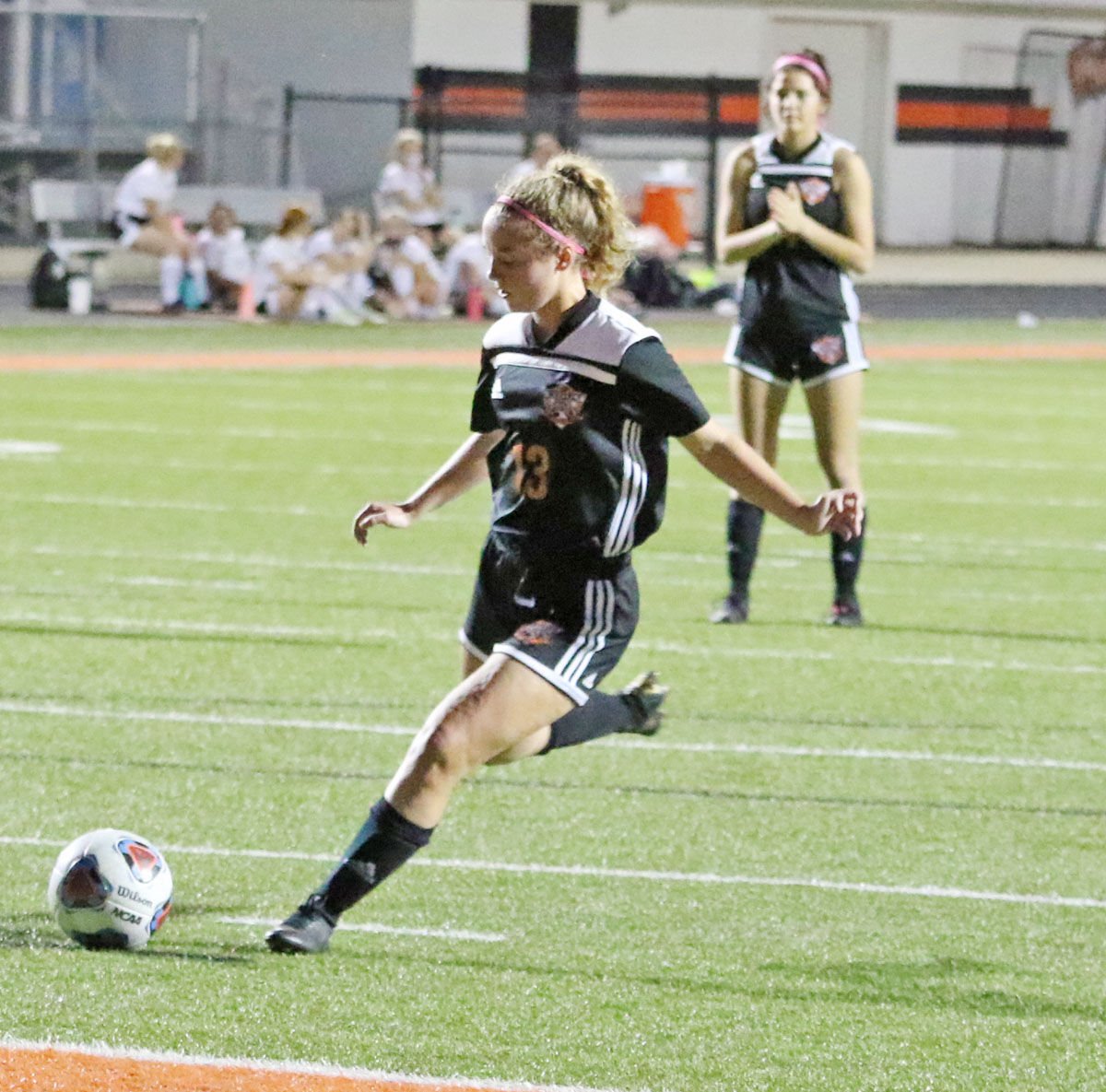 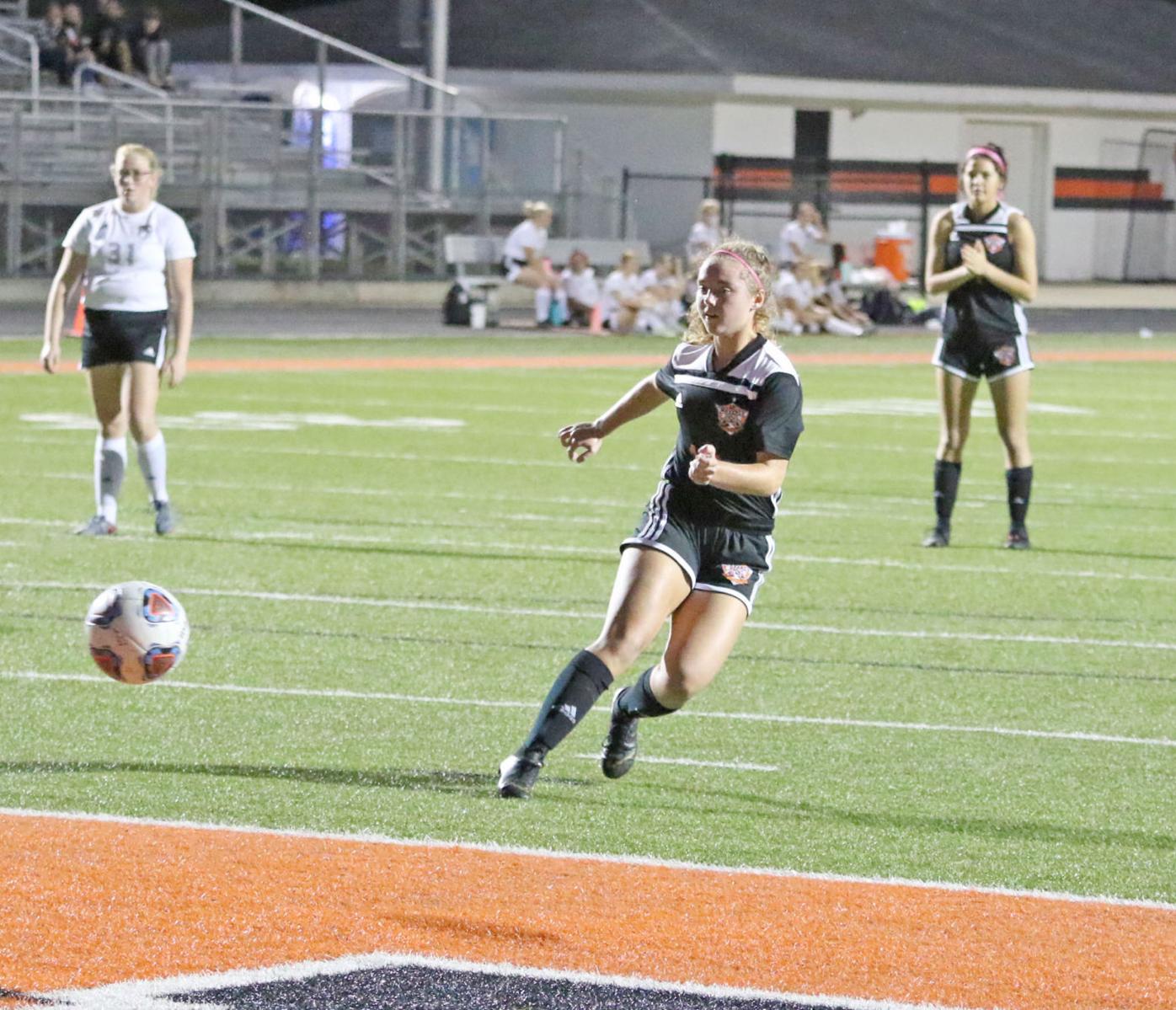 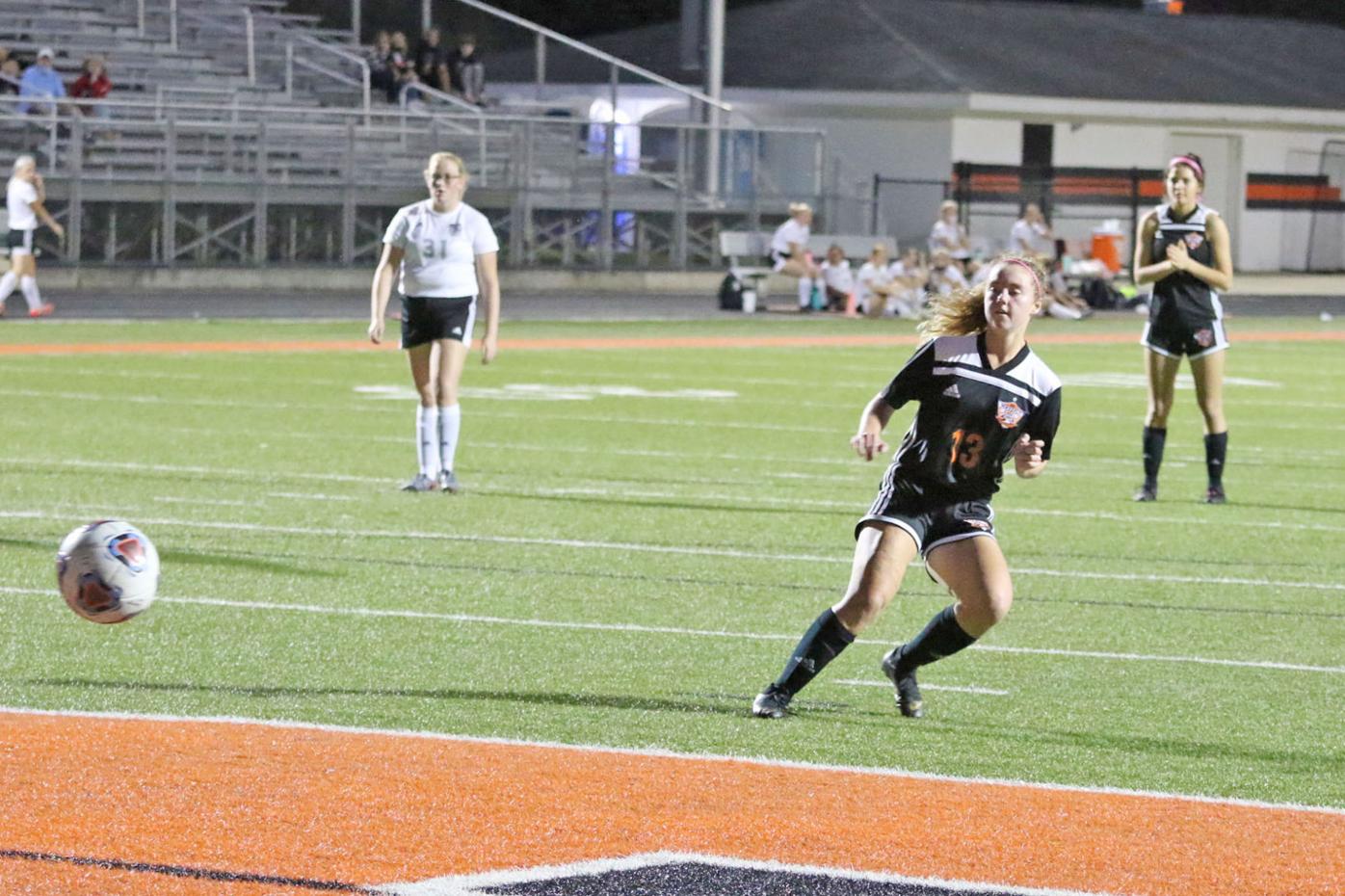 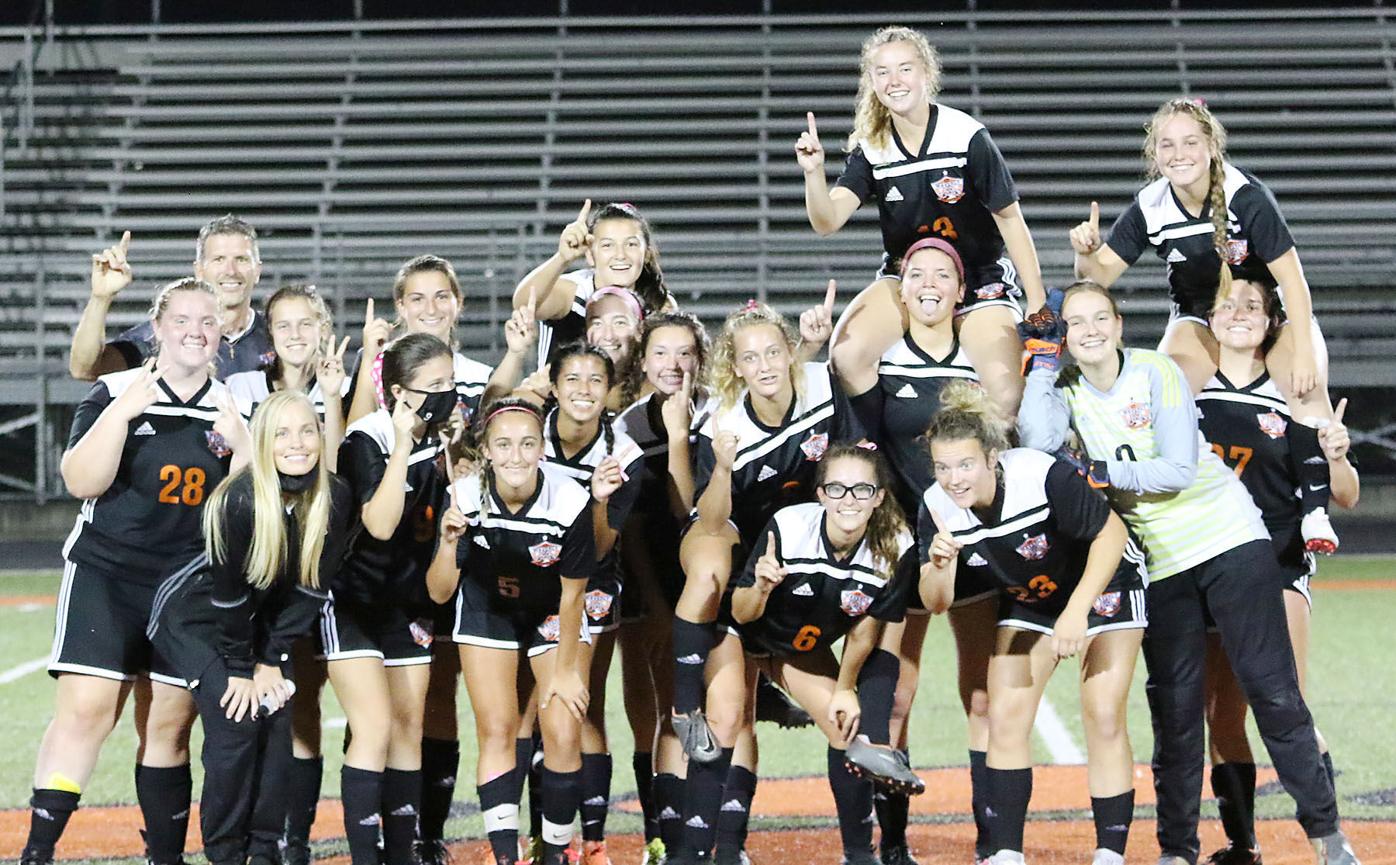 After winning over Portsmouth West to wrap up their first-ever outright Southern Ohio Conference soccer title, the Lady Tigers gathered on the paw at midfield for a group photo.

Waverly senior Loren Moran scored on a penalty kick with 18:53 left in the first half of Monday night’s 10-0 win over West. That goal gave Moran three for the night and 100 for her career.

As one of the top soccer teams in the area, the Waverly Lady Tigers checked off another goal and a program first Monday evening.

Using a dominant 10-0 win over the visiting Portsmouth West Lady Senators, the Lady Tigers wrapped up their first ever outright Southern Ohio Conference title. During the game, senior Loren Moran produced her own personal milestone by scoring her 100th career goal. Moran needed three goals in the game to accomplish the feat. She recorded her third with 18:53 to play on a penalty kick.

The Lady Tigers secured their first league title one season ago, but it was shared with the Wheelersburg Lady Pirates. It also went down to the final league game of the year for both Waverly and Wheelersburg. The two teams split contests with each other and finished in a tie of 8-1 in 2019 standings. This year, the title is theirs alone with one SOC game left on the schedule.

In Monday night’s dominant victory, Waverly senior Amelia Willis started the scoring off by using an assist from Kylee Murphy, putting the Lady Tigers up 1-0 just more than two minutes into play. The next goal came about three minutes later when Zoiee Smith used an assist from Kylie Smith to score, doubling the lead 2-0. The third goal of the night belonged to Loren Moran, using an assist from Delani Teeters to make the lead 3-0 nine minutes into play. Just more than a minute had ticked off the clock when Willis scored again on a long kick across and into the opposite corner of the net. That made the lead 4-0 with 30:02 left on the clock in the opening half.

Teeters had the opportunity to tally her own goal about a minute and a half later off a ricochet, as Moran continued to fire. Teeters pushed the lead to 5-0 with that goal.

Moran was able to get her milestone about 10 minutes later. Moran scored with 19:29 left in the half on an assist from Zoiee Smith. The Lady Tigers were threatening again, when a Portsmouth West player tangled with Zoiee Smith near the goal, and was issued a yellow card. The yellow card gave the Lady Tigers a penalty kick, where Moran delivered on the shot, hitting with 18:35 on the clock for her third goal of the night and her 100th goal of her career for a 7-0 lead. Zoiee Smith had the final goal of the half at 18:02 on a long shot from the 10-yard line of the football field, 8-0.

In the second half, senior Macey Gecowets scored on a header after a corner kick midway through the 40-minute period. Then Alexis Murphy capped the scoring late in the game with an unassisted goal, 10-0.

After the win, Smith and Moran reflected briefly on surpassing the 100 goal mark. Smith’s milestone came back on Sept. 12 in a 10-0 victory over Washington Court House. Both were quick to credit the rest of their team for helping them surpass more than 200 goals combined.

“I couldn’t do it without every single one of these girls here or any of the girls in the locker room. They mean the world to me,” said Zoiee Smith. “Without them, I wouldn’t be the person or the player I am today.”

Michaela Rhoads, one of the senior leaders on defense, talked about the team chemistry. A lot of the teams rely on just a couple of players.

Senior Macey Gecowets added, “One thing about our team that doesn’t compare to other teams is how we all love each other and how hard we work together. We know the value of teamwork. I love these girls like they are family.”

Gecowets has only been on the team for the past two years. She joined the team as a junior after losing a bet to friend Michaela Rhoads. The result has been nothing but short of amazing for Gecowets.

“We’ve been friends since eighth grade,” said Gecowets of Rhoads. “Since I have been friends with her, she and her parents have said I should play soccer, but I always said no. I wish I would have listened.”

“I’m so happy she did,” said Rhoads. “She’s gotten so much better as a player even though she’s only played two years.”

Gecowets was the backup goalie when she joined the team as a junior, and has shared the role with junior Lydia Brown this year.

“Coming onto this team, I knew there were high expectations,” said Gecowets. “I knew we were a skilled team. At first, I was in awe of how much work we did. I’ve struggled through the work, but I wouldn’t change a minute of it for the world. Being with this team through our accomplishments we’ve made has been special. I wouldn’t go back for anything. Losing that bet was the best thing I’ve ever lost.”

“It feels like a family,” said Willis of rejoining her classmates. “I can’t imagine not being here. The girls are like my sisters. I’ve never had a close team like this.”

Waverly Head Coach Chris Murphy has been working with this group of girls for a long time, which happens to include one of his daughters and two of his nieces.

“I’ve won a few (Southern Ohio Conference titles), but this one means the most. When I came into it the first time (winning SOC), I came into a program that was already established (Waverly boys soccer). With this one, these girls came in and helped establish the program. What they have accomplished in this short time, along with everyone who has gone before them, is very special,” said Murphy.

“This is the group (the senior class) that has been playing together since third grade. I’ve been involved with coaching these girls since they were itty bitty. That makes it extra special. These girls came into this team to help and bring their soccer mindset, their skills, and their vision to this level. There was a while where they had another nice coach named Mark Williamson, who helped develop them. We were a part of that program as well. To see how far they have come and what they have culminated in the short time they’ve been here has been remarkable.”

Murphy appreciates the assistance he has received as well.

“It means a lot. (Assistant Coach) Danielle (Boggs) and I have been working so hard for so long. The program has been around for six years. In the first year, I was not blessed enough to have her coach with me. I had another assistant coach, Olivia Wilson, who was great,” said Murphy. “The last five years with Danielle has been so much fun. We’ve developed a real camaraderie. We both work together well. It helps to translate into the girls. They have worked so hard.”

The Lady Tigers aren’t close to being finished yet. They had one final league game to play Tuesday evening as they headed to Northwest. Then they will wrap up the regular season

“I think this league title means even more to us this year because we’ve worked hard to get to where we are, and we won it outright,” said Gecowets. “We don’t have to share it. That means our work has paid off, and I’m proud of how far we’ve come.”

“Winning it twice in a row is big for us. We are very proud of our accomplishments, but we are not even close to being done. We have our eyes set on our first tournament game, Gallia Academy,” said Waverly senior Zoiee Smith. “We beat them, but we aren’t looking past it. Then we have our eyes set on the next game after that, which is Warren. We are looking forward to that. We think our chances are high. So our expectations are high.”

“It is nice to know that we lived up to the previous seniors’ expectations (for the program). We aren’t done yet, and I don’t plan to be done for a while,” said Kylee Murphy.