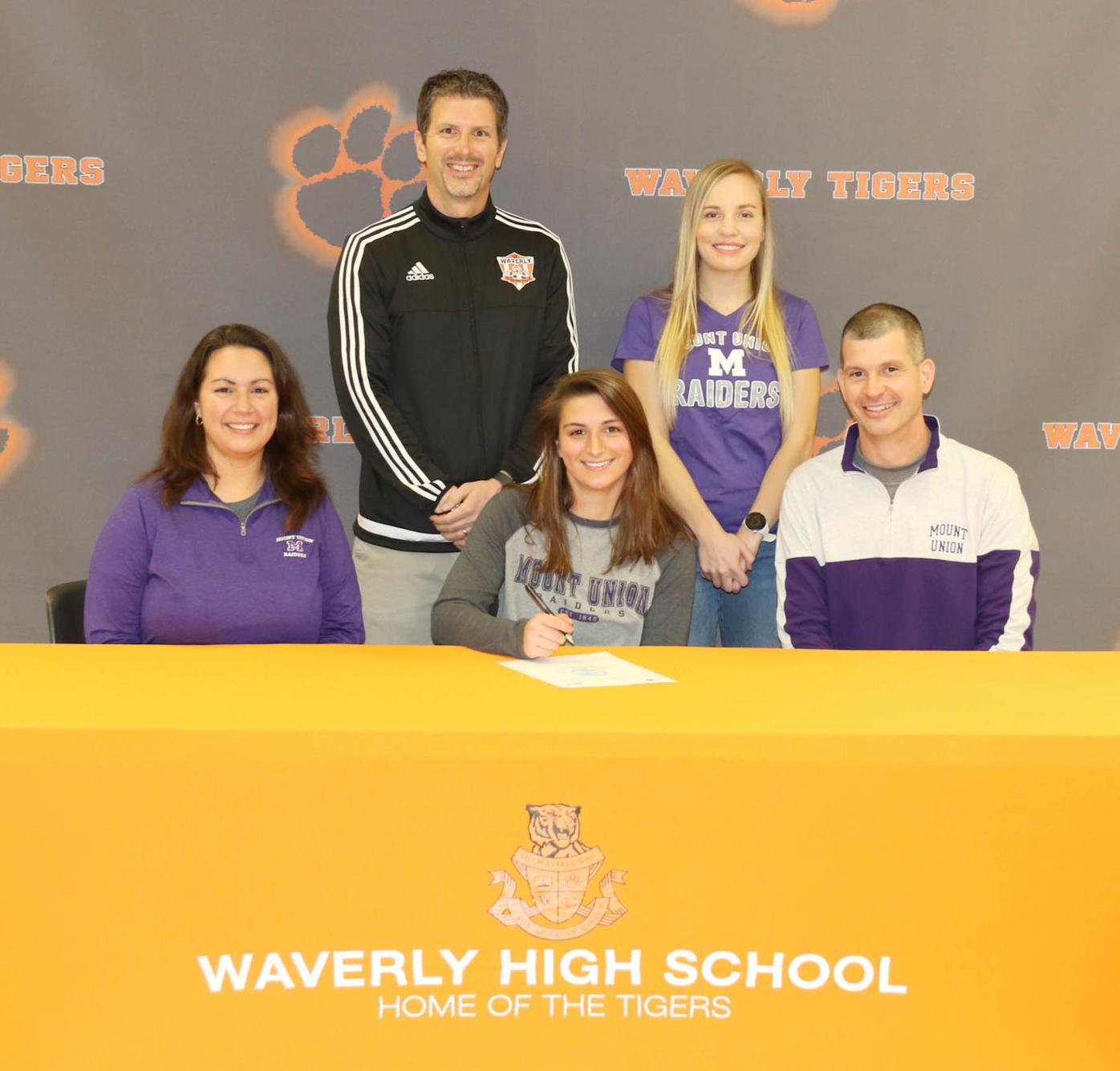 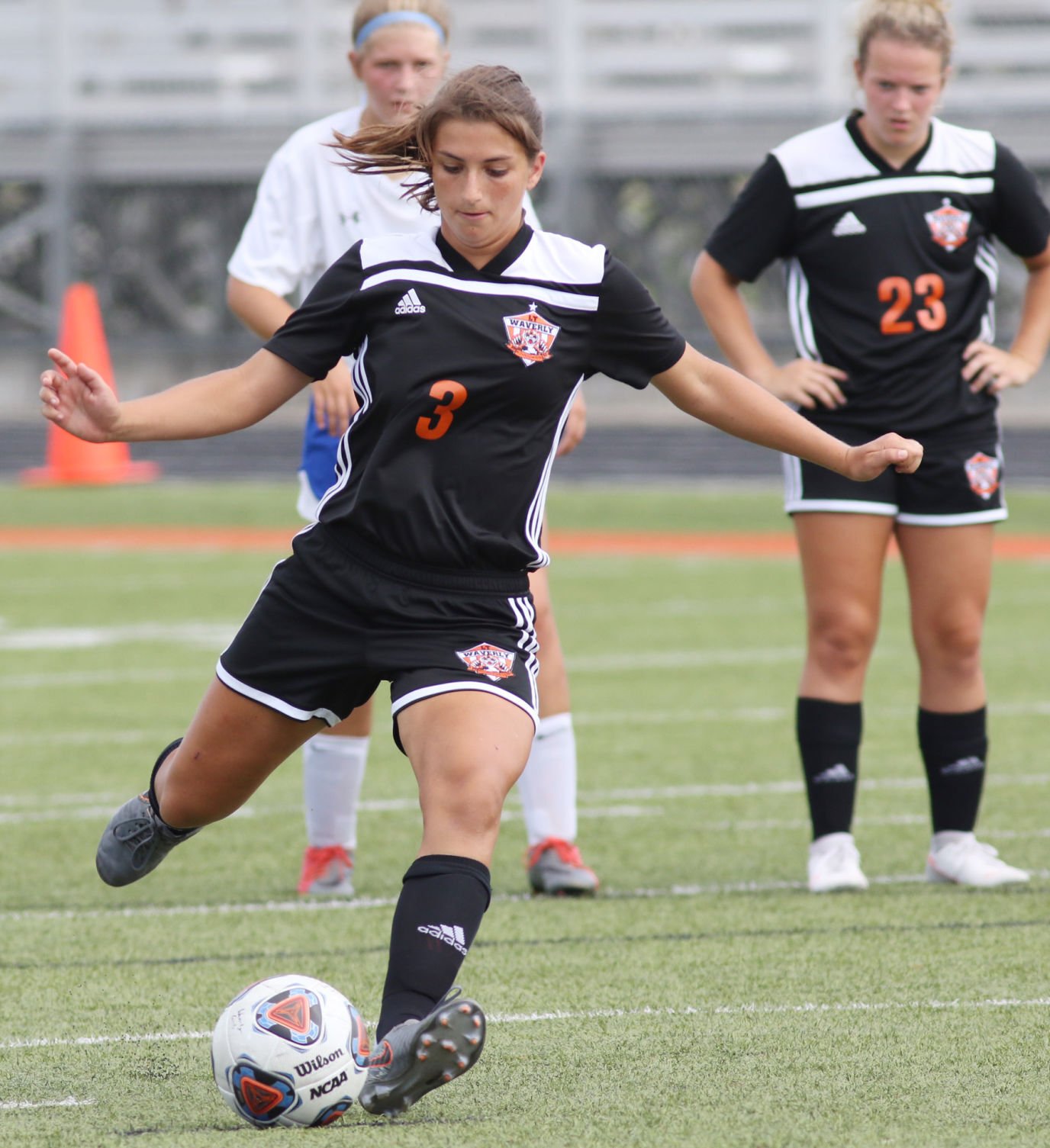 Alexis Murphy scores on a penatly kick during the game versus Washington Court House on Sept. 12, 2020. 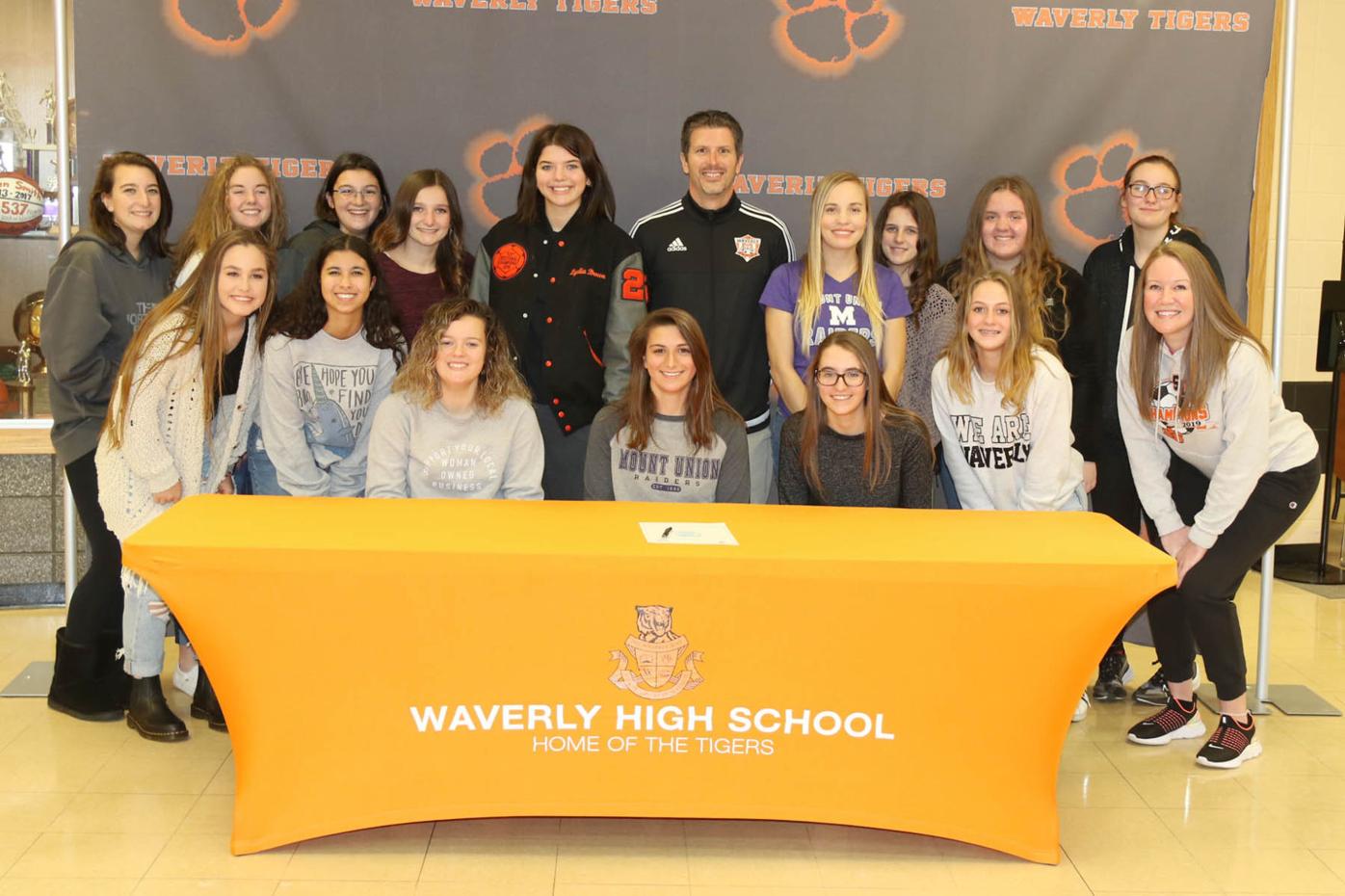 Alexis Murphy takes a group photo with her Waverly High School soccer teammates after signing with the University of Mount Union on Friday, Feb. 5. 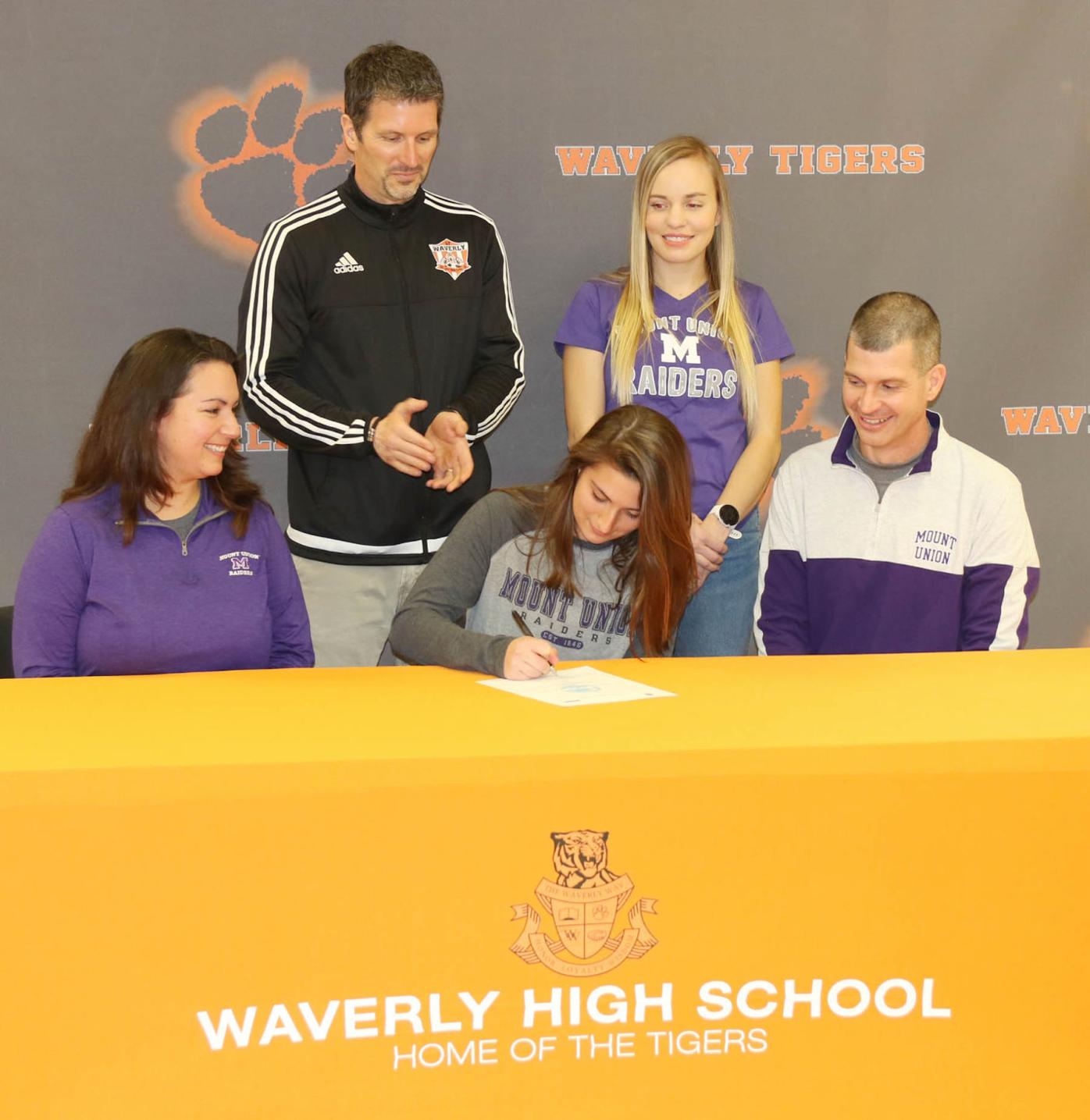 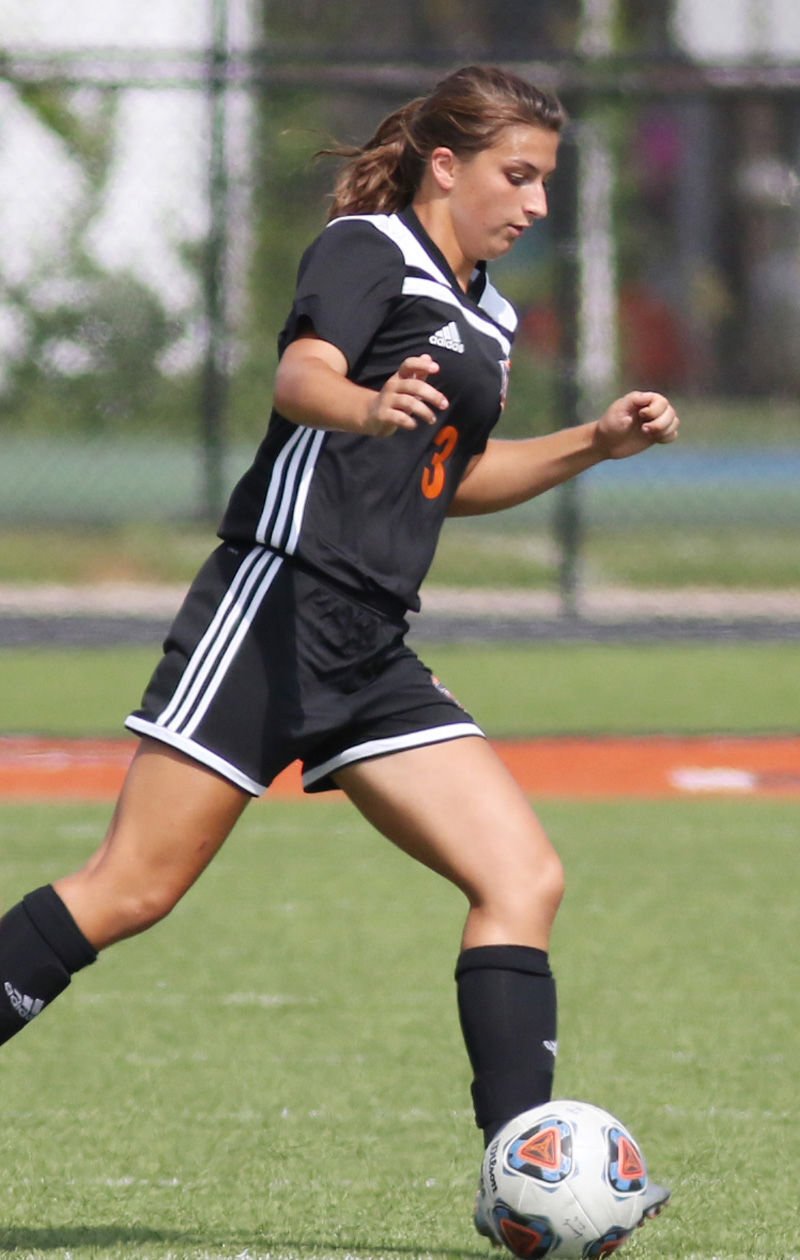 Alexis Murphy directs the ball toward a teammate and away from an opposing attacker during a home game.

Alexis Murphy scores on a penatly kick during the game versus Washington Court House on Sept. 12, 2020.

Alexis Murphy takes a group photo with her Waverly High School soccer teammates after signing with the University of Mount Union on Friday, Feb. 5.

Alexis Murphy directs the ball toward a teammate and away from an opposing attacker during a home game.

Having a line of defense is crucial for any team searching for success.

The Waverly Lady Tigers have enjoyed plenty of it over the past four years on the soccer pitch. A huge part of that success can be attributed to this year’s senior class — a group which is full of many college bound athletes.

“Alexis was one of our center backs. We’re losing two very strong center backs next year between Alexis and Michaela (Rhoads). That will be a major void that will need to be filled next year,” said Waverly coach Chris Murphy. “What was nice about both of those athletes was that Alexis and Michaela worked so well together. They knew how each other worked on the field since they were young. They have been playing together on the same team since third grade. You can’t replace that.”

Although Murphy was primarily a defender, she still had some opportunities to contribute to the scoring. Waverly’s Max Preps site, which includes statistics from the past three seasons, shows that Murphy was a leader in steals.

During her sophomore year, she had the opportunity to have a goal and an assist. As a junior, she tallied another goal, finishing with 15 shots in all. Murphy also recorded 43 steals. As a senior, Murphy provided three goals, four assists, 15 shots and 25 steals. One of the goals she had came on a made penalty kick.

“Alexis is a valuable center back. She works very hard. She reads the game well. Michaela (Rhoads) would have a tendency to do more of the offensive attacking. Alexis would hold the back and make sure teams did not counter on us, using her speed, physicality and good vision to help control the play and move the ball,” said Coach Murphy. “It was really nice because most teams would kick the ball out of bounds on defense. We were able to go and turn up the field to maintain possession. That is attributed to both Alexis and Michaela. They knew how to play the angles and control the space.”

At Mount Union, Murphy will be coached by Kelley Clark, who is in her 10th season.

According to Coach Murphy, Mount Union sent a video about the program and university last season. Alexis Murphy viewed the film and began communicating with the coaching staff. Clark came to watch Murphy play club matches and during the fall months at Waverly High School.

“One of my previous (club) teammates went to Mount Union and did cheerleading. I also had a family friend who is a professor there,” said Alexis Murphy. “She gave me my first initiation. I didn’t know Mount Union had mechanical engineering as a major until I looked up schools one day.”

While playing soccer and pursuing a mechanical engineering degree will be a big challenge, Murphy is ready for it.

“I’ve been taking college credit plus (college classes during high school) along with following Christopher’s (Coach Murphy, who is also her uncle) soccer schedules,” said Alexis Murphy. “I’m going to take it slow, nice and easy, and ask for help if I need it. I will figure it out from there.”

Murphy is looking forward to the next chapter of her academic and athletic career.

“I’ve always wanted to play college ball. When I was little, I wanted to go professional, but that faded now that I want to focus on engineering,” said Murphy. “Mount Union gave me the opportunity and I’m grateful for it. It was a double bonus and a great day to get to play soccer and have my major.”

Murphy loves playing defense, but she is willing to switch positions if needed.

“I can see the field. I feel like I can control more. I know everything that is happening in front of me and I’m not too worried about what is happening behind me,” she said. “I know that I can play anywhere. I will go wherever they want me to go. I’m hoping it will be defense I like it back there.”

The challenges will be great, but she’s prepared to meet them.

“It is going to be a great experience and a wild ride, but I’m ready for it,” said Murphy. “With God on my side and my family and teammates as support, that’s all I need. It is going to be great.”