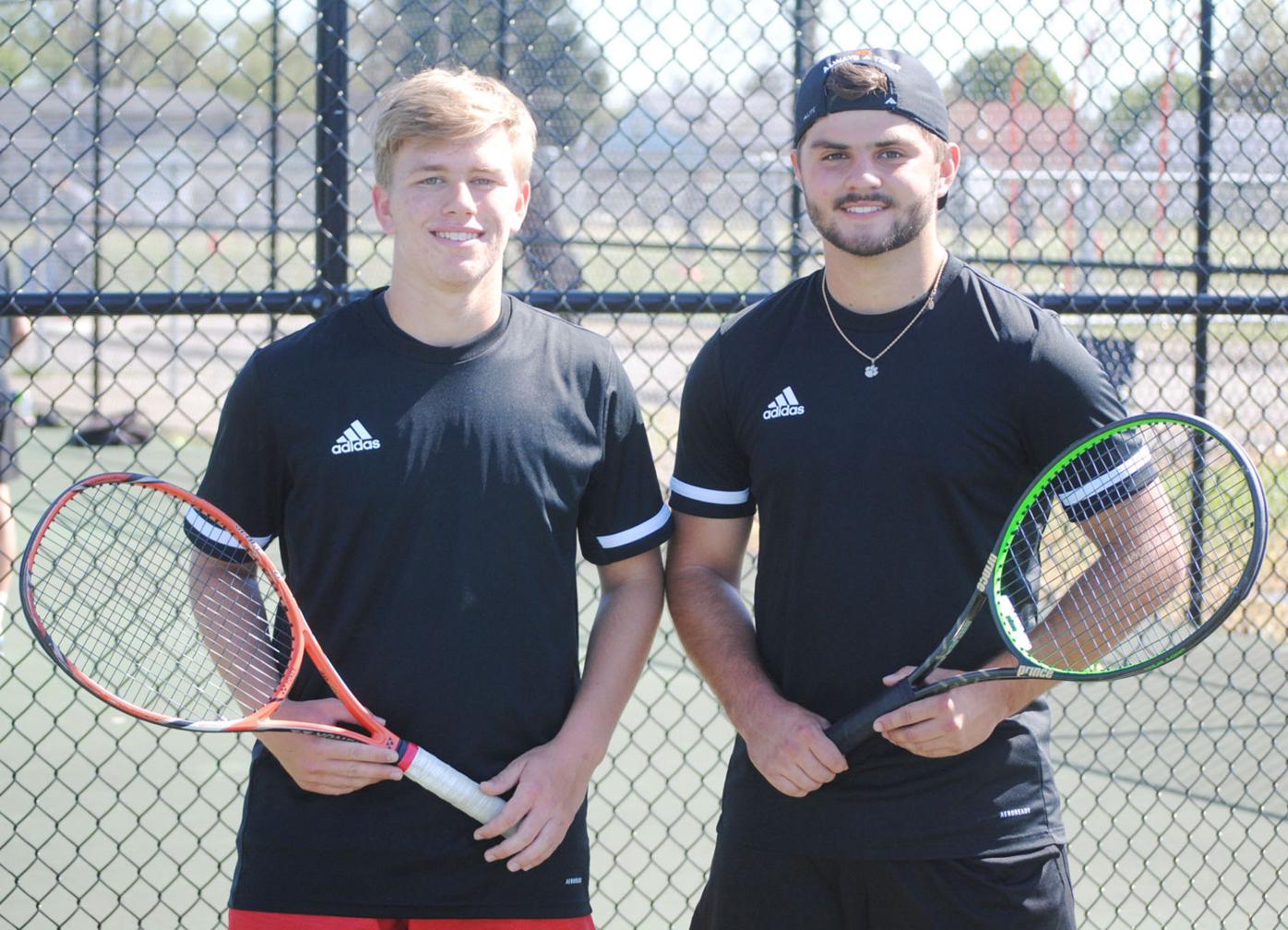 Waverly’s two senior tennis players, Patrick Copple and Jaxson Poe, have teamed up to roll through an undefeated doubles season. Copple is the only four-year varsity player, while Poe is playing for the first time. 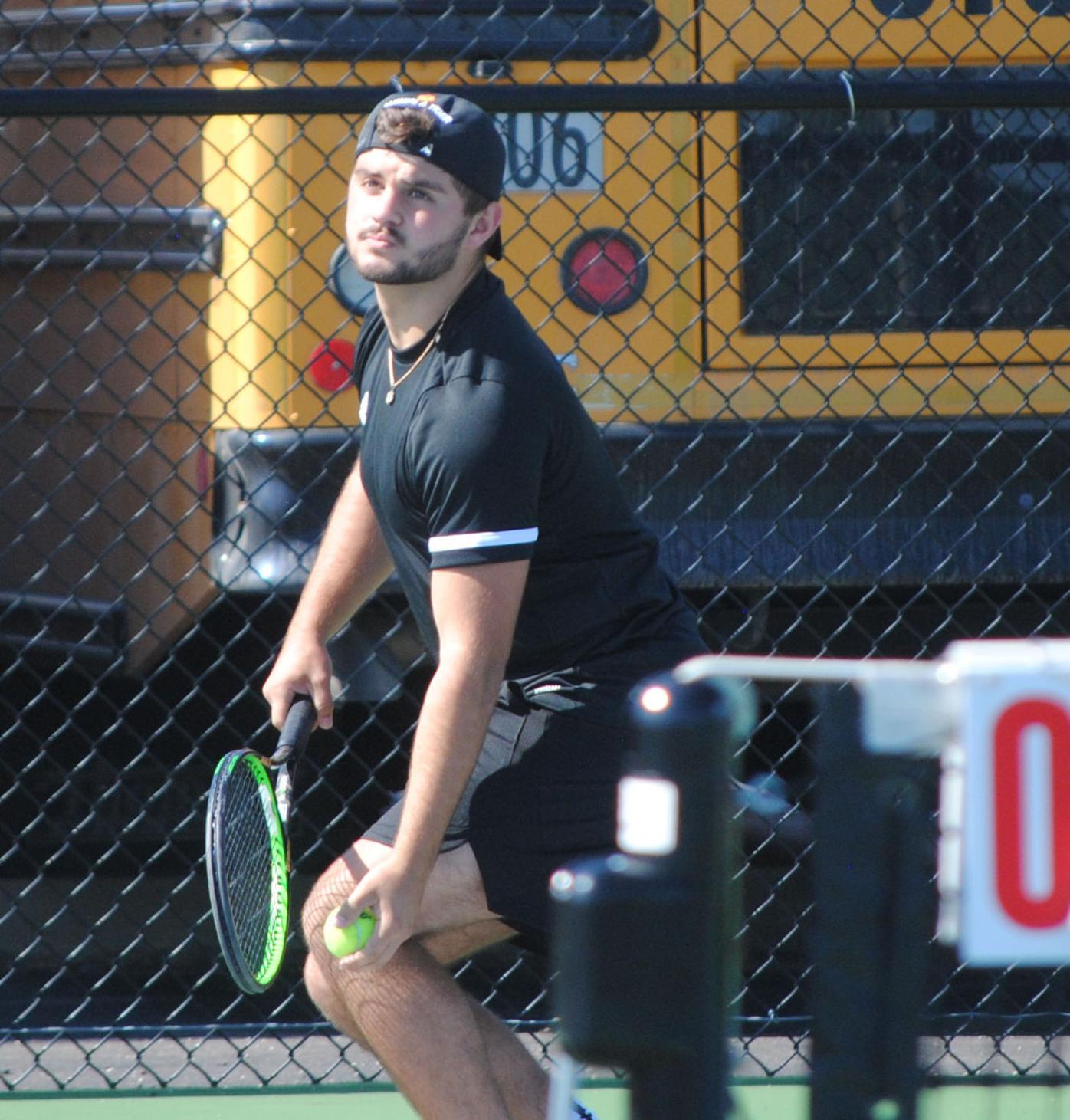 Jaxson Poe prepares to serve the ball during warm-ups prior to the Minford match on Monday, April 26. 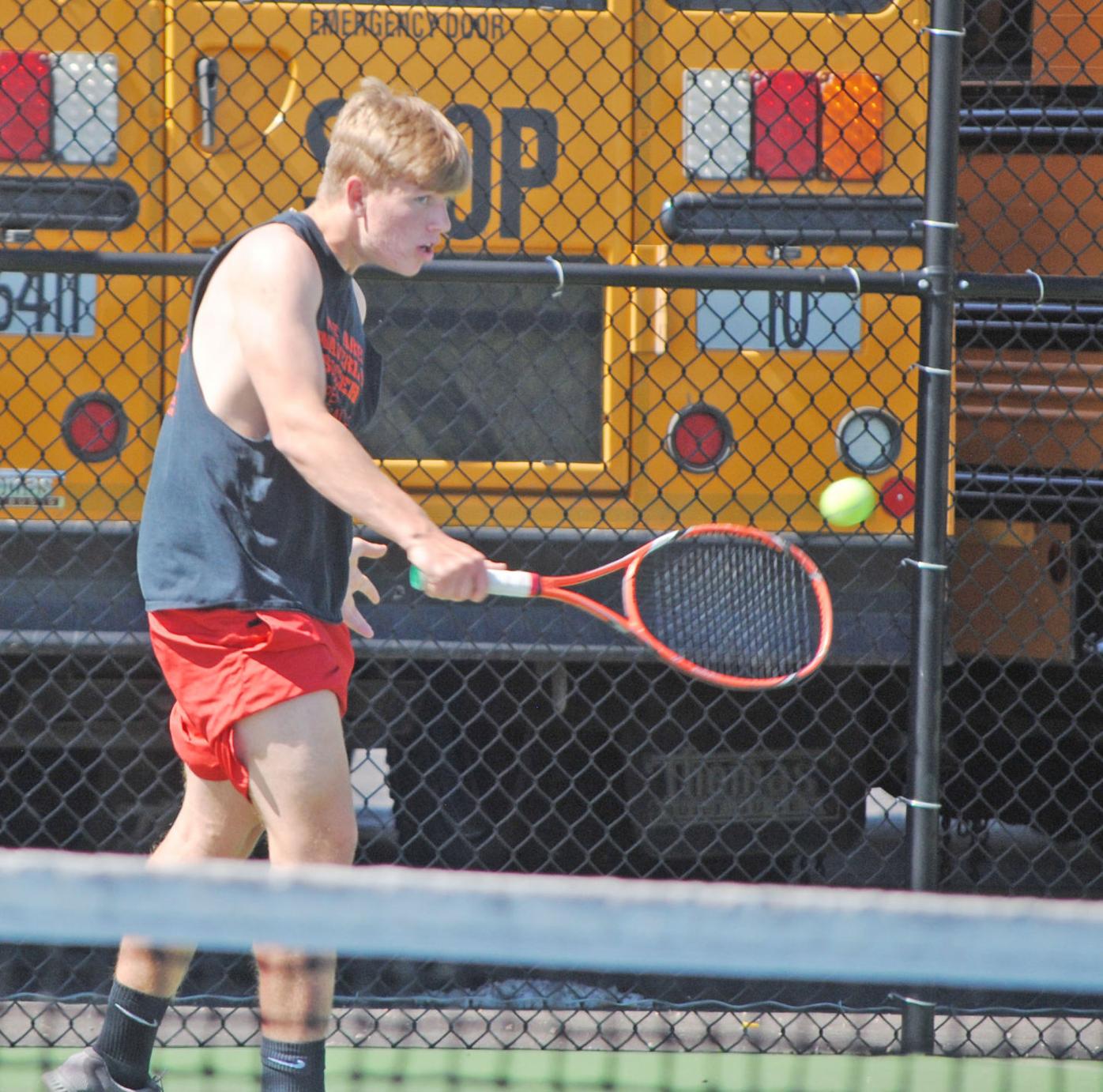 Warming up and hitting with teammate Jaxson Poe prior to Monday's home match versus Minford, Patrick Copple fires a backhand shot across the net. 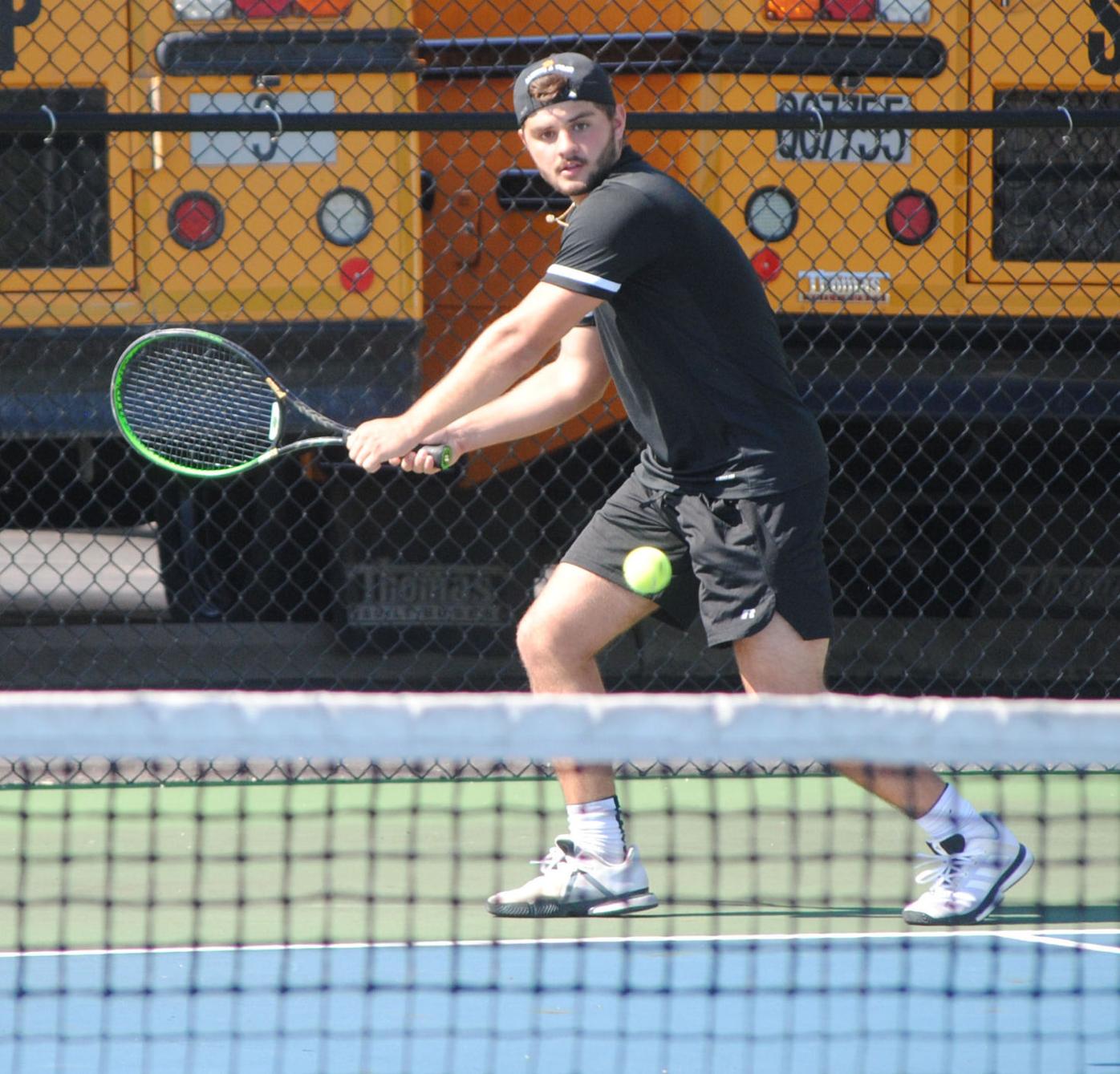 Waverly's Jaxson Poe tracks the ball as he prepares to fire it back across the net. 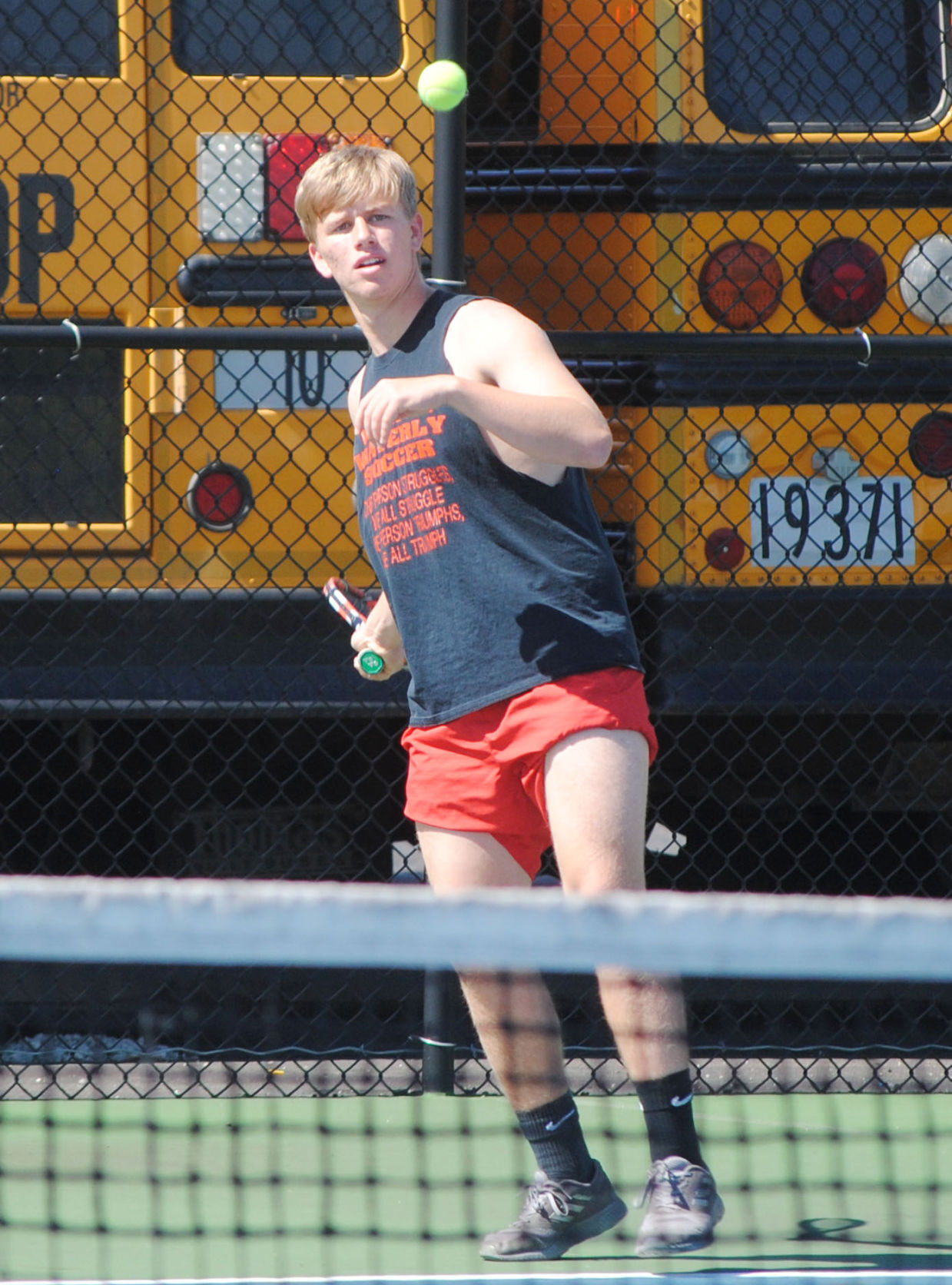 Patrick Copple prepares to take a big swing and fire a shot back across the net to teammate Jaxson Poe in warm-ups Monday evening. 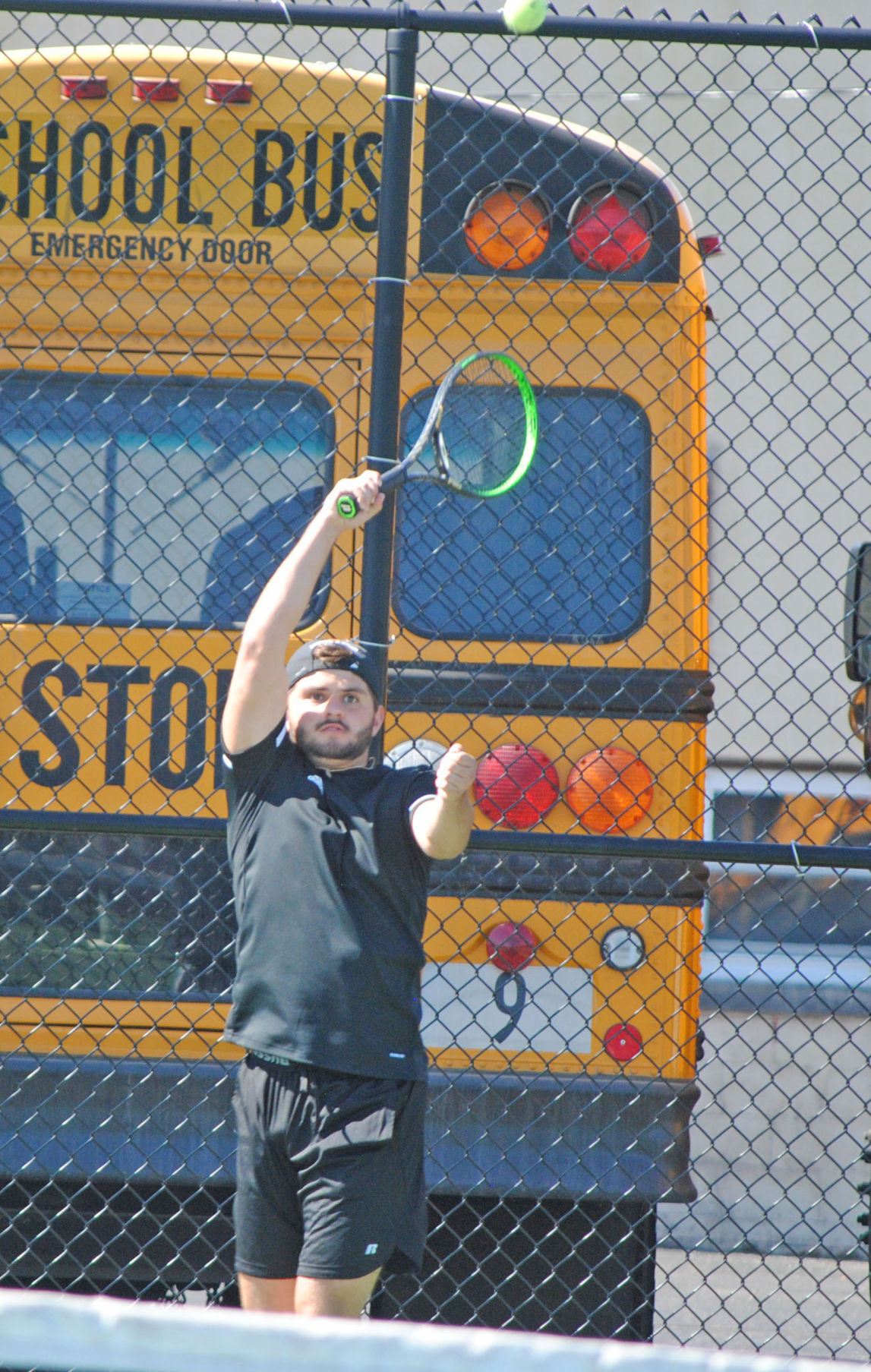 Jaxson Poe serves the ball during warm-ups prior to Monday night's match with Minford. 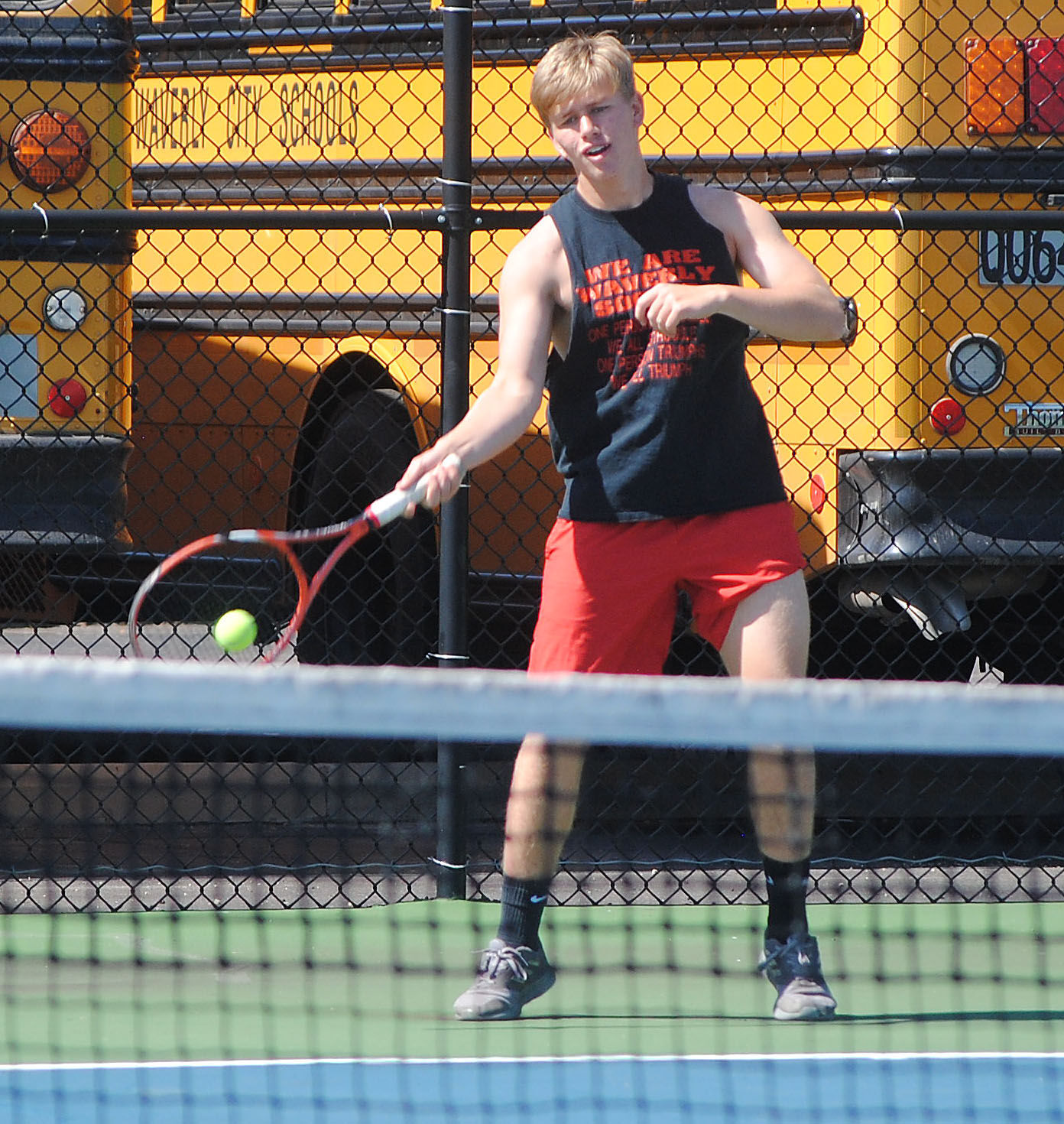 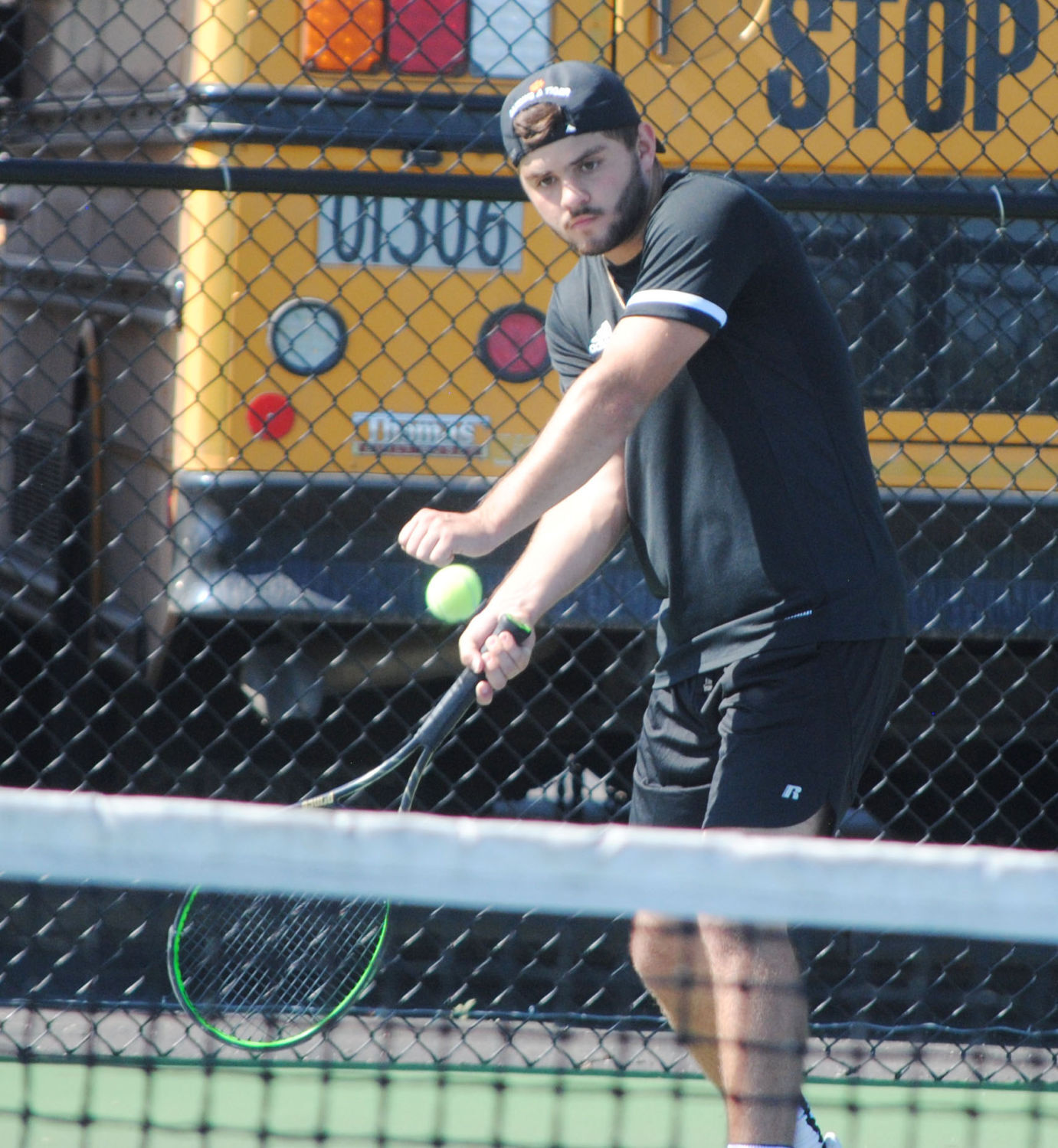 Jaxson Poe prepares to send the ball back across the net.

Waverly’s two senior tennis players, Patrick Copple and Jaxson Poe, have teamed up to roll through an undefeated doubles season. Copple is the only four-year varsity player, while Poe is playing for the first time.

Jaxson Poe prepares to serve the ball during warm-ups prior to the Minford match on Monday, April 26.

Warming up and hitting with teammate Jaxson Poe prior to Monday's home match versus Minford, Patrick Copple fires a backhand shot across the net.

Waverly's Jaxson Poe tracks the ball as he prepares to fire it back across the net.

Patrick Copple prepares to take a big swing and fire a shot back across the net to teammate Jaxson Poe in warm-ups Monday evening.

Jaxson Poe serves the ball during warm-ups prior to Monday night's match with Minford.

Jaxson Poe prepares to send the ball back across the net.

With just enough players on the roster to compete and fill the seven spots required for high school tennis, the Waverly Tigers have enjoyed another triumphant run through the season.

In order to be on top, as the undefeated and defending Southern Ohio Conference champs, it takes an entire team to function.

Having very few variations in the lineup this season, the Tigers have cruised despite having four of their seven — Mark Stulley, Jaxson Poe, Landon Shiland, and Caden Nibert — competing as first-year varsity players.

Poe and Stulley joined the team last season, but they didn’t get to do any competitive playing except practice, as the state of Ohio deemed that spring sports could not be contested due to the coronavirus/COVID-19 pandemic.

Caden Nibert, the lone freshman, is the younger brother of Brandon Nibert, a 2019 graduate who made three straight state tennis tournament appearances during his sophomore, junior and senior years.

In fact, in Brandon Nibert’s senior year, he and then Waverly freshman Penn Morrison met in an all-Waverly district final, as both went to the state tournament. Now Penn is a junior, and Brandon’s younger brother, Caden Nibert, is starting his tennis career.

Nibert doesn’t mind being the only freshman on the team.

“I’m fine with it. These guys are making me feel welcome. They are my friends on and off the tennis court. We are like brothers,” he said. “I’ve been coming in the summers ever since sixth grade. I feel like I’ve come a long way (in tennis).”

Caden Nibert has been teamed up with junior Waylon Lamerson to form Waverly’s No. 1 doubles duo. The two have yet to suffer a loss.

Regarding doubles play with teammate Waylon Lamerson, Nibert feels they have been doing well.

“Overall, I have most of the serves. We have only lost a few games throughout the season,” said Nibert. “When Waylon and I are placed on a certain side of the court, the deuce side (right) and the ad-side (left), I have the better backhand and he has the better forehand, so that sets us up well at the net. Waylon is a really good player. Without Coach (Matt) Morrison’s help, we wouldn’t be anywhere.”

Lamerson feels that he and Nibert complement each other on the court.

“We play really well together. He’s really good at the baseline, and I’m a lot better at the net. I use my height to get a lot of the attempted lobs,” said Lamerson.

“It has been a good year. We’re playing really well this year. I’m still making too many mistakes. I would like us to make it to at least the semifinals at districts and maybe go to state if we can.”

Mark Stulley and Jaxson Poe both joined the team for the spring 2020 season.

Stulley said he joined because 2020 graduate Payton Shoemaker had decided he wanted to close out his high school career on the tennis court. Stulley, Penn Morrison and Payton Shoemaker, all football players, wanted to play together before Shoemaker graduated and went on to Indiana Wesleyan to play college football.

“We wanted to play a sport together one last time because it was Payton’s senior year,” said Stulley, who quickly decided he wanted to continue the sport for the rest of his high school career. “I love it. It is awesome. I have tons of fun playing tennis. We are all friends. We crack jokes with each other. It is just a good team and atmosphere.”

Stulley made it through most of the season without suffering a loss after taking the No. 2 singles role. He had his first and only setback against Minford on Monday, April 26.

“I am just using my athleticism, tracking everything down and trying to not make errors. I’m trying to make the other person hit into the net or out of bounds,” said Stulley.

He is also thrilled that he and fellow football players, Penn Morrison and Jaxson Poe, will secure their second league titles of the year.

“It is good to have that success through my junior year with two SOC titles,” said Stulley. “Hopefully that momentum will carry into next year with football, basketball and tennis.”

Copple is glad to have the opportunity to close out his senior season after not getting to play in 2020.

“Last year was really bad. We had such a great team with a lot of athletes,” said Copple. “We were ready for tennis season to start. It ended right away and was really disappointing.”

This year has been a different story, as Copple and Poe enjoy the ride to close out their high school careers.

“It has been fun. Practices are always jam-packed full of drills and then we play matches. We’ve always had a good tennis program. Our doubles teams have always been strong. We’ve been winning No. 1 and No. 2 singles, too, so we could win the league.”

In order to enjoy that success, off-season preparation is part of the equation.

“We work non-stop. Even if it rains, we have the gym work we do,” said Copple. “I think this will be a really good year for us to get a lot of our players on the All-SOC team. We have a really good chance for a lot of people to go to districts, and maybe even state.”

Poe is thankful to have the opportunity to take the court in 2021.

“I tried to play last year when COVID hit. I was able to get some practice and experience then, and now it is finally paying off,” said Poe.

“I had been playing baseball for most of my life. I got burned out on it, and wasn’t really having fun. So I decided to try something new. I enjoy tennis most of the time. It is like golf. It can be so frustrating. You feel like you are doing everything right, and then one thing goes wrong, and it is all out the window.”

There was an adjustment period for Poe as he learned the game.

“It was severe, being a baseball player. Coming from swinging a baseball bat to a racquet is a completely different motion. It was quite the learning curve,” said Poe. “I got a lot of help from my highly experienced other senior player. Patrick is always helping me. The lack of knowledge on one side of the court (mine) compared to the immense knowledge on the other side of the court (Patrick’s) is quite drastic. We’re ready to win and get this league title wrapped up.”

Landon Shiland, the lone sophomore, is new to tennis this year. His older sister, Kayleah, a 2020 graduate, played tennis for Coach Matt Morrison on the girls team during the fall seasons. She was a part of the 2019 Lady Tigers SOC championship tennis team. Landon said his sister told him about playing tennis, and he watched some of her matches when she was competing.

“I tried throwing (in track), but I like this better. I plan to play in my upcoming years,” said Shiland.

“Tennis can be very frustrating. It is not fun unless you are doing well. At first, it was hard to learn the rules. Now that I have it figured out, I just need repetition and doing the same things over and over. That’s what makes you better at tennis. It just takes time, which I don’t really have right now.”

Shiland feels a big part of the team’s success can be attributed to the fact that the Tigers seem to like tennis better than many of their opponents.

“We have a good coach, too,” said Shiland.

For Penn Morrison, the success has been great, but he knows he is far from finished.

As a freshman, Morrison won an endurance match at state. He had a quick turnaround before playing his second-round match against a well-rested opponent, resulting in a loss. Morrison is hungry for more.

“My goal is to get back to state, win a couple of matches, and maybe the whole thing (Division II singles tournament) if I get the right draw. That’s always the goal to win it all,” said Morrison.

“I’ve been hitting against Brandon Nibert, who went to state three times. I’ve also been hitting with some guys who play at Shawnee State, which helps a ton.”

All-in-all, it has been a fun ride.

“I love our team this year. It is fun being around these guys. We haven’t had any real close matches, so we can laugh and have fun,” said Morrison.

When asked about the biggest key to success, Penn Morrison pointed toward his Coach Matt Morrison, who is also his dad, and said, “It is all a credit to him. He’s the reason we are as successful as we are. He knows how to take players who aren’t experienced and make them into decent players. We just dominate when we can do that.”