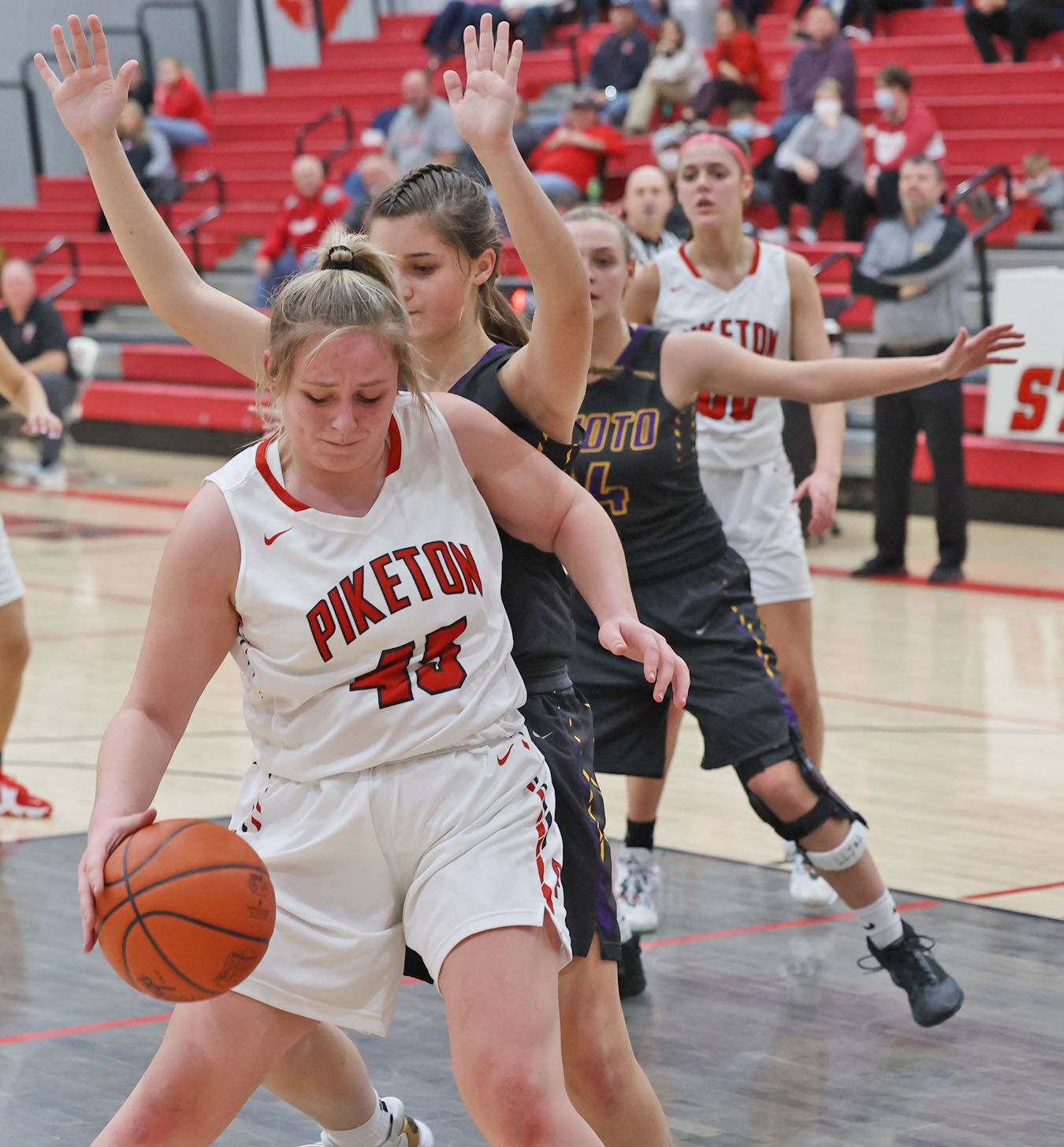 Piketon sophomore Laney Brown prepares to post up against a Unioto defender for an inside bucket during the first half of action in Thursday night’s game. 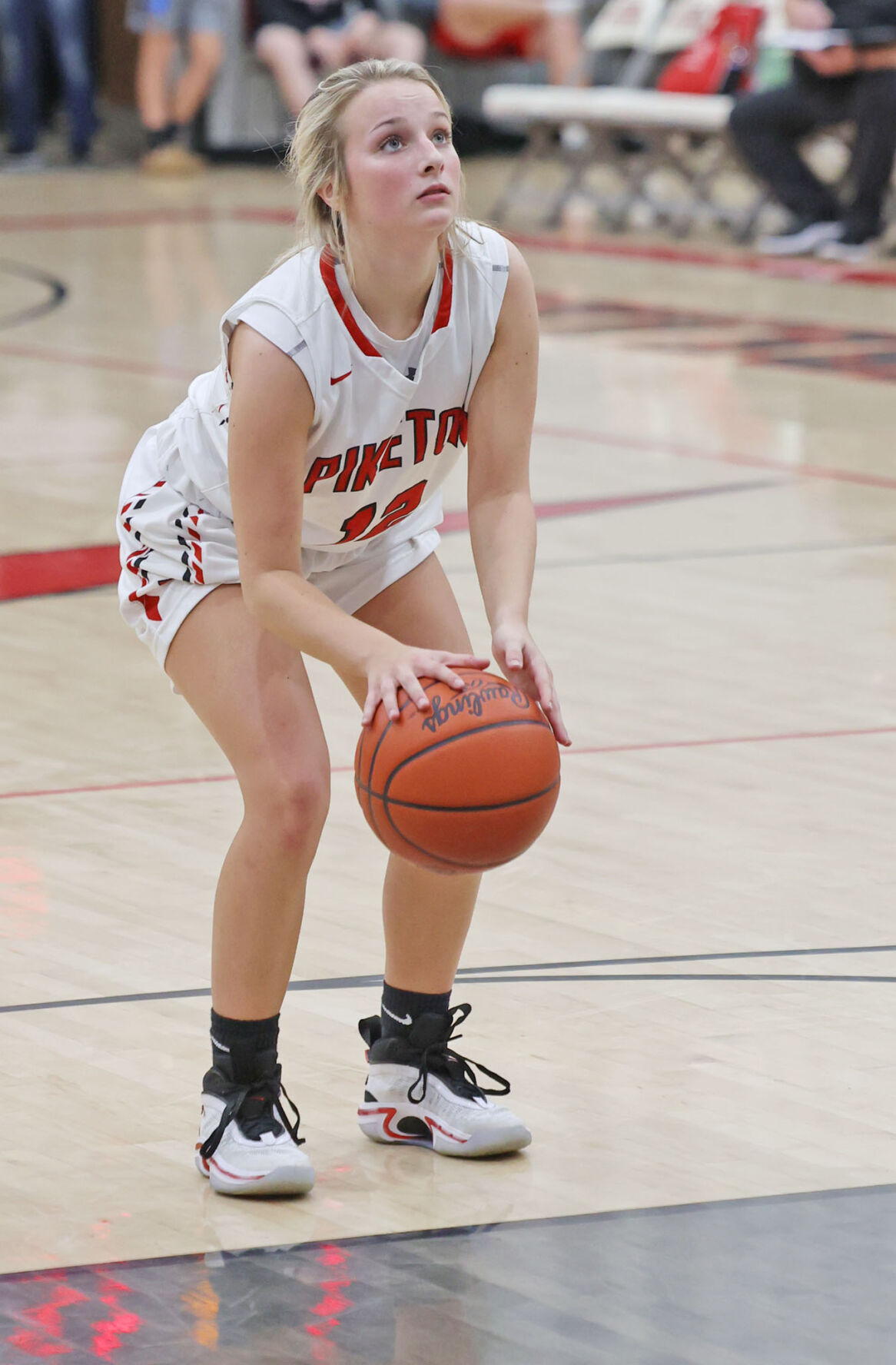 Piketon freshman Abrial Johnson concentrates on the hoop as she prepares to shoot a free throw during the first half of Thursday night’s home game. She finished with nine points.

Piketon sophomore Laney Brown prepares to post up against a Unioto defender for an inside bucket during the first half of action in Thursday night’s game.

Piketon freshman Abrial Johnson concentrates on the hoop as she prepares to shoot a free throw during the first half of Thursday night’s home game. She finished with nine points.

In life, effort, determination and the willingness to work can all pay dividends. The same can be applied to sports.

In the case of Thursday night’s high school girls varsity basketball game between Piketon and Unioto, those same qualities were on display.

Although Piketon didn’t come out with a victory, the Lady Redstreaks battled to the final buzzer, knowing that they did not have enough time to make up the double digit deficit. Unioto claimed a 52-38 win to stay near the top of the Scioto Valley Conference standings.

“Sports just boil down to attitude, effort and mental toughness. With everything going on, both teams faced that same adversity and played their hearts out,” said Piketon coach Jason Taylor after the game.

Piketon had the lead several times in the opening minutes of the contest. Unioto struck first before Piketon sophomore post player Laney Brown cashed in on an assist from teammate Kennedy Jenkins. Brown was able to score again after Piketon forced a turnover, creating a brief 4-2 lead. Midway through the quarter, Jazz Lamerson gave Piketon a 6-4 advantage after scoring on the give-and-go.

Unable to add more points during the final four minutes of the frame, Piketon’s defense limited Unioto to just one field goal, tying the score at 6-6 with three minutes left on the clock. Unioto added two more points from the line to move ahead 8-6 before the quarter ended. For Piketon, Kennedy Jenkins grabbed four rebounds during the quarter as well as recording one blocked shot. Lamerson added several steals.

The second quarter continued like the first as Piketon worked to make it hard for Unioto to score. After three minutes of play, the Lady Shermans had pushed to an 11-6 advantage. But Lamerson was able to get to the line twice, hitting 3-of-4 to trim the deficit down to two again, 11-9.

Unioto went back up 15-9 before the Lady Redstreaks rallied again. Lamerson fought through traffic to score inside twice with freshman Abrial Johnson adding a free throw between. Piketon was within one, 15-14, with less than two minutes to play in the half. Defensively, Piketon forced a turnover and had the opportunity to try and take the lead. But then the Lady Redstreaks had a turnover of their own. Unioto added the final bucket of the half with less than a minute to play, making the score 17-14 at the break.

The Lady Shermans came out of the locker room strong to start the third quarter, opening with a 12-2 run to go up 29-16. Piketon’s lone basket during that stretch came from Lamerson, who scored on a pass from Jenkins.

Still, Piketon never stopped fighting, snapping a string of 10 unanswered points that occurred during the 12-2 run, with a three-pointer from Addison Johnson to make the score 29-19. Unable to start a rally at that point, Piketon suffered three straight turnovers, which allowed Unioto to add six points, increasing the lead to 35-19. But the final three minutes of the quarter belonged to Piketon.

First, Jenkins was able to draw a foul and swish a pair of free throws. Then Lamerson did the same. Piketon’s final basket came on a three-pointer from freshman Abrial Johnson after Addison Johnson and Lamerson had both collected hard-fought offensive rebounds that led to the opportunity for Abrial Johnson. The Lady Redstreaks had cut the lead to nine, 35-26, going into the final quarter.

Unioto opened the scoring in the fourth quarter before Piketon added back-to-back baskets. Brown took advantage of an opening in the lane and scored inside. Then Abrial Johnson scored on Piketon’s next possession, cutting the lead to 37-30. Unioto pushed it to 10 with a three-pointer, only to see Abrial Johnson collect the ball in a scramble and score while drawing a foul. She added the ensuing free throw to complete a three-point play and get Piketon within seven again, 40-33, with five minutes left.

Piketon was unable to overcome Unioto’s final run, as the Lady Shermans took the next two minutes to outscore the Lady Streaks 10-2 with Brown providing the lone basket for the Lady Streaks during that stretch. Addison Johnson was able to follow with a three-point play and Lamerson blocked a shot, but ultimately Unioto was able to take the 52-38 win.

For Piketon, Lamerson led the scoring attack with 13 points, followed by Abrial Johnson with nine points, Laney Brown with eight, Addison Johnson with six points and Kennedy Jenkins with two.

“We’re a little thin in numbers with two starters out. Our senior, Savannah (McNelly), went down with a knee injury, and Natalie (Cooper) is in quarantine right now. We were already thin. We were only two or three deep. Now we are down to one deep,” said Taylor.

“Natalie Cooper has been averaging about eight points and Savannah has been averaging four. We lost about 12 points of offense, so we need other players to make that up. Going forward when everyone is healthy, that will give us more weapons.”

The Johnson sisters combined for 15 points, while Brown added a much needed eight, which thrilled the Piketon coaching staff.

“Laney (Brown) is our hustler. She has an engine that doesn’t stop. Other teams hate to play a kid like that, because she is everywhere and is physical, but she does it in a basketball way. Everything she does is physically strong and fast,” said Taylor.

“Abrial (Johnson) does all of the little things and hustles. We have to have some scoring and Addie (Johnson) and Abrial gave us some points. Addie is Abrial’s biggest fan. Abrial always wants to guard Addie in practice, which will only make her better.”

Unioto was led by Avery Miller with 15 points, followed by Amaris Betts with 11 and Carissa Wheeler with nine. The Lady Shermans improved to 12-3 overall and 7-2 in the SVC with the win to stay in second place. Paint Valley and Adena are tied for first with one league loss each.

“The chemistry on this team is awesome,” said Taylor. “It is a rebuilding year for us. We have a new coach, a new system and new roles. Everybody has to have a role on this team — just like in life. Somebody has to dig the ditches, and somebody has to count the money.”

Piketon is scheduled to travel to Logan Elm for a non-league contest at 12:30 Saturday, Jan. 15. It will be a busy week as the Lady Redstreaks resume SVC play with a road game at Huntington Tuesday, followed by an away game at Zane Trace Thursday, and a make-up road game at Westfall on Saturday, Jan. 22 at 1 p.m.

Prior to playing Unioto at home Thursday, the Lady Redstreaks traveled to Southeastern Tuesday and suffered a 39-33 loss to the hosting Lady Panthers.

Piketon fell behind 12-4 after the opening quarter but fought back to get within two at halftime, 19-17. The fight continued in the third quarter as the Lady Streaks stayed within three, 31-28, but couldn’t overcome the deficit in the fourth quarter.

Southeastern was paced by Gabby Pernell, who finished with 15 points.

These photos were taken during the Thursday, Jan. 13, 2022 varsity basketball game between the Piketon Lady Redstreaks and the Unioto Lady She…