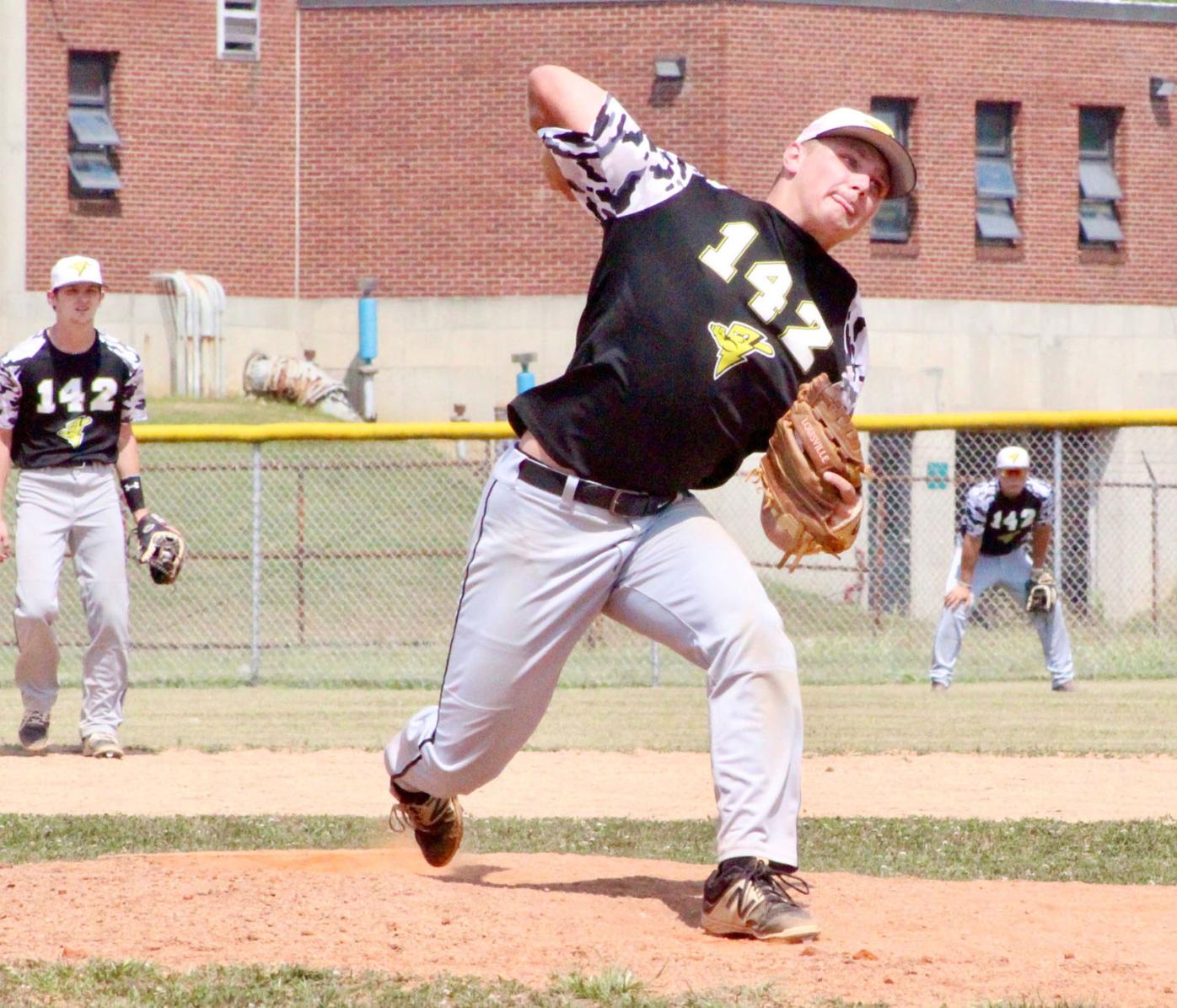 Waverly Post 142’s Lane Mettler delivers a pitch to a batter in his team’s first game of the regional tournament on Sunday afternoon. Mettler recorded the pitching victory and also had two RBIs in the 3-1 triumph. 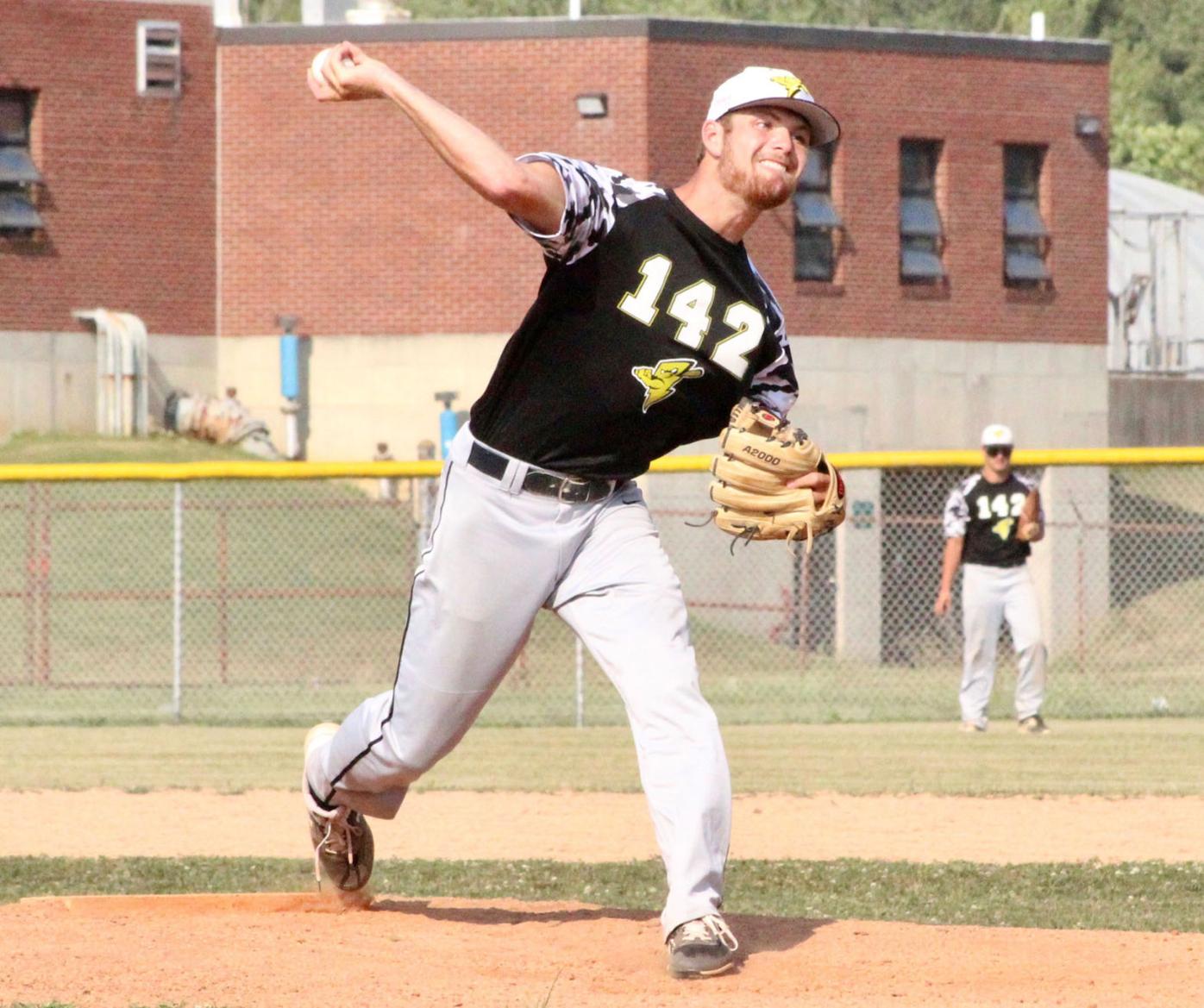 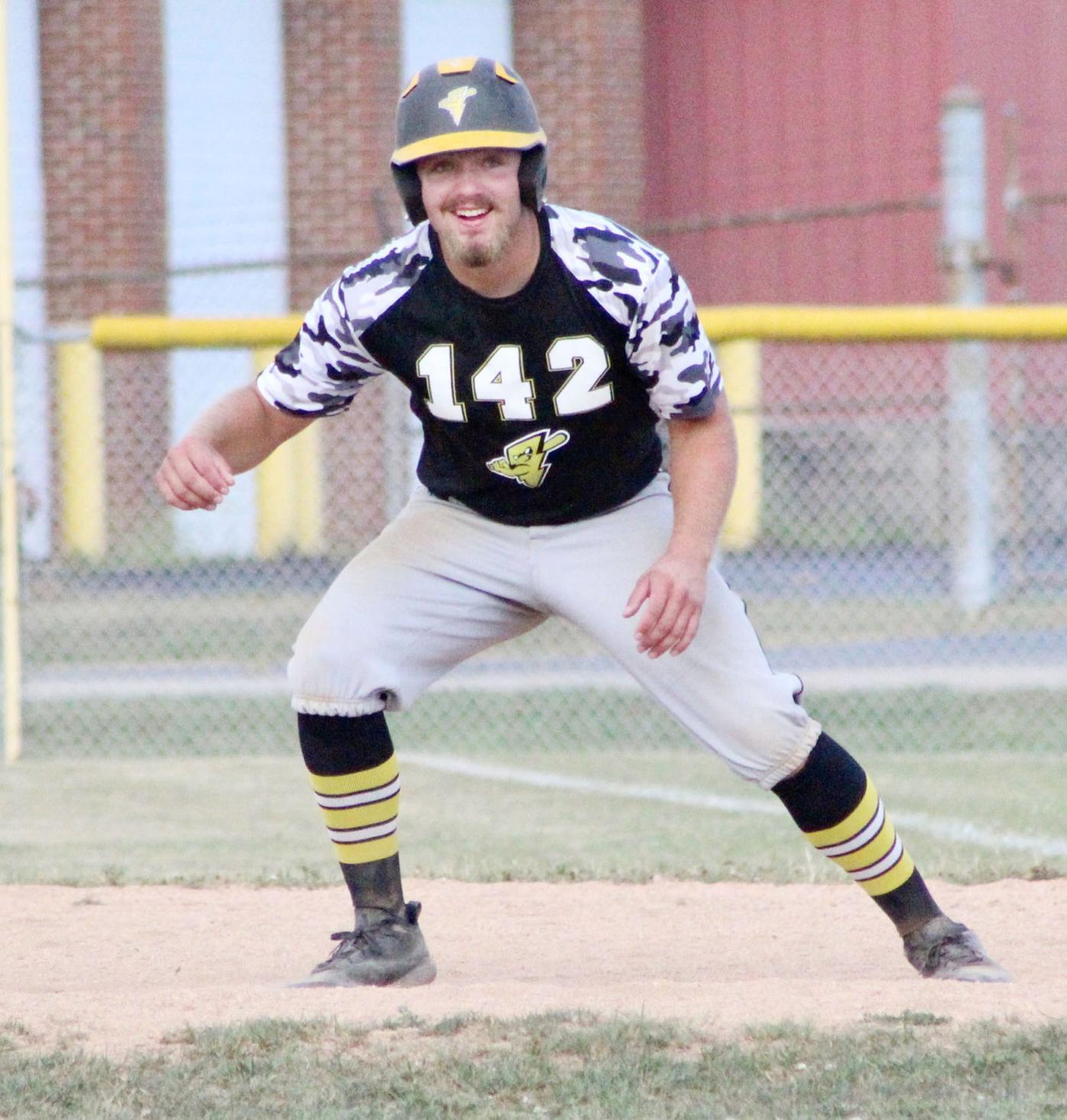 Kannon Pack leads off at first base during tournament action on Sunday. Pack generated two hits and two runs during those two wins. 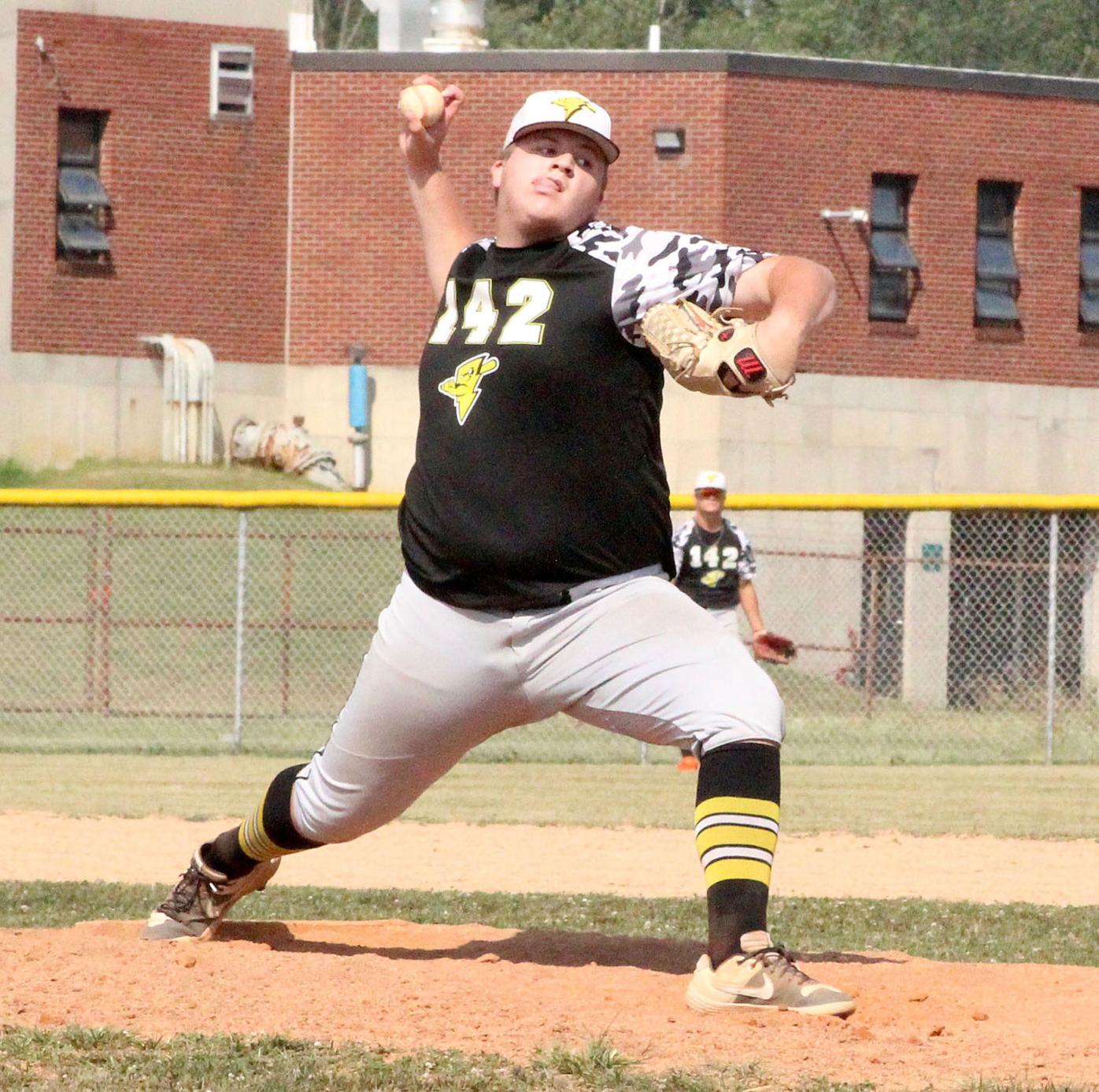 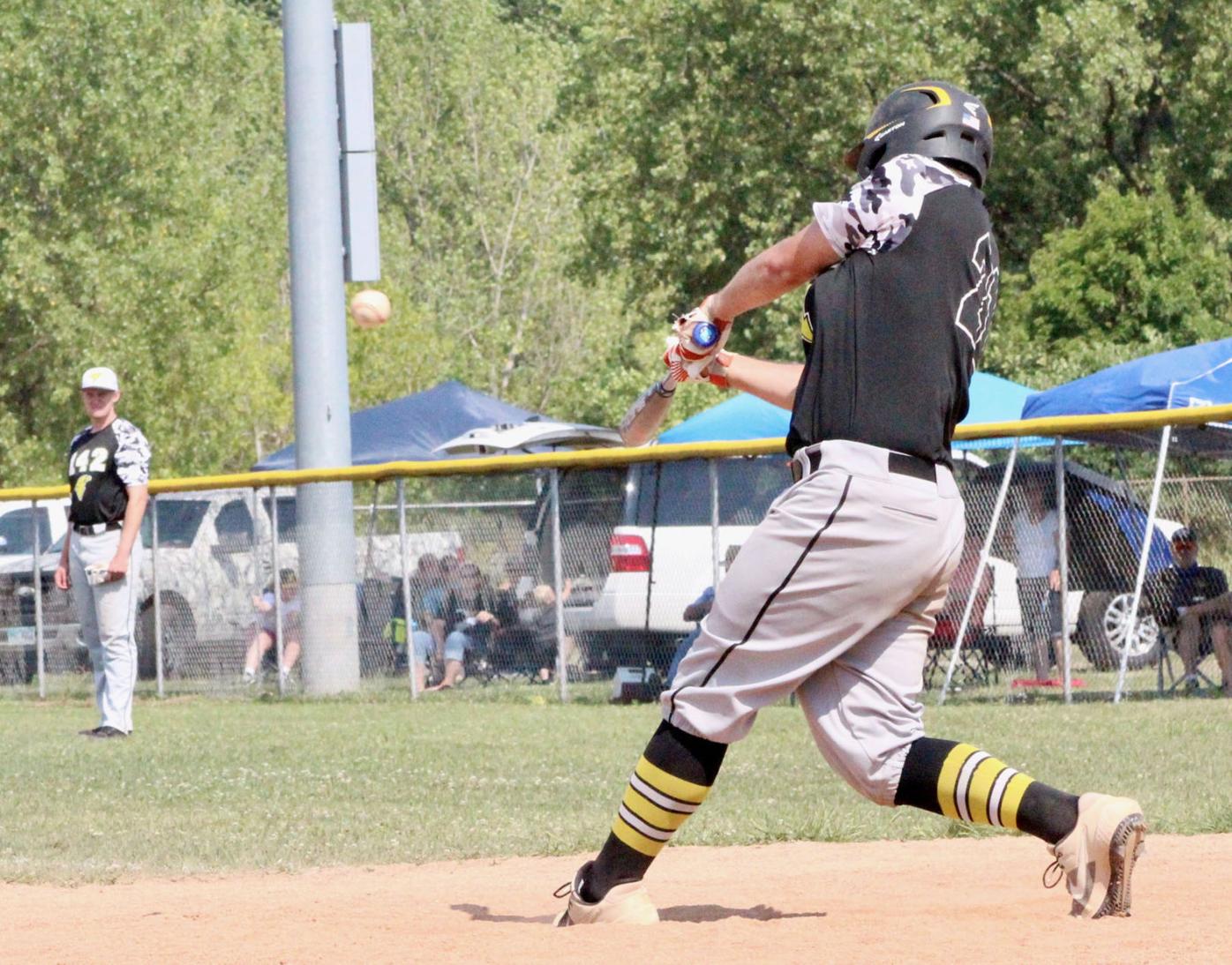 Waverly Post 142’s Lane Mettler delivers a pitch to a batter in his team’s first game of the regional tournament on Sunday afternoon. Mettler recorded the pitching victory and also had two RBIs in the 3-1 triumph.

Kannon Pack leads off at first base during tournament action on Sunday. Pack generated two hits and two runs during those two wins.

Through blistering hot temperatures for one game followed by a storm delay in the second, the Waverly Post 142 Senior Shockers have played their way into the regional championship game.

With a 3-1 victory over Hillsboro Sunday afternoon, followed by a 2-1 eighth-inning walk-off win over Portsmouth Sunday evening, the Shockers kept themselves in the winners’ bracket of the Region 5 tournament. They had the day off Monday, while three remaining teams — Portsmouth Post 23, Chillicothe Post 757, and Hillsboro Post 129 — had to play each other to determine which one will square off with the Shockers for the championship. That title game was set for 6 p.m. Tuesday night on J.W. Hoffman Field at Mary Lou Patton Park in Chillicothe.

In an ordinary year, the winner of the Region 5 tournament would go on to the state tournament. However, the Ohio Legion organization did not officially sanction baseball this year due to COVID-19, after the national organization announced it would not be holding the American Legion World Series.

The first game of Sunday’s action saw Portstmouth Post 23 knock off the hosting and top-seeded Chillicothe Post 757 Colts by a score of 4-3. The Portsmouth players then had time to take in the action, as the Waverly Post 142 Shockers started their battle with Hillsboro Post 129, to see which team they would play in the nightcap.

Waverly claimed the early lead in the 3-1 win with the initial run in the opening inning. Hillsboro tied it in the top of the third, only to see Post 142 add two more runs in the bottom of the third. That was the end of the scoring, as the Shockers worked their way out of multiple jams defensively to preserve the two-run lead. Post 129 left 12 runners stranded on base, while Post 142 left just six.

Hillsboro’s largest threat came in the opening inning, as starting pitcher Lane Mettler worked to find the strike zone. He surrendered three walks in that opening inning, but didn’t give up any more the rest of the way as he found his groove. In between the walks, Mettler was able to get one batter to pop up to Derek Eblin at first. He recorded the second out on called strikes. Then the third out came in the form of a groundout to second baseman Jake Thornsberry.

Weston Roop started the offense in the bottom of the first inning with a one out single before Kannon Pack did the same. Eblin worked a walk to fill the bases, before Lane Mettler connected on a sacrifice fly to left field, helping his own cause while giving the Shockers the 1-0 advantage.

Settling into a rhythm, Mettler struck out the first two batters he faced in the top of the second inning. The third batter doubled before Mettler came back to record another strikeout of the fourth to end the inning.

Jake Thornsberry produced a one-out single for Waverly in the bottom of the second, but he was stranded at first.

Hillboro produced its only run in the top of the third after Drew Pitzer singled, stole second and scored on a base hit from Josh Wolfe, 1-1.

The Shockers struck back quickly as Kannon Pack led off with a single and Derek Eblin followed with a double. Once again, Mettler helped his own cause by producing a single to score Pack and make the lead 2-1. Alex Boles entered as a courtesy runner for Mettler and stole second base, creating a Hillsboro catcher error that allowed Eblin to score for a 3-1 advantage.

The rest of the game was a battle. Pack was able to get back to base with a leadoff walk in the bottom of the fifth inning. Hillsboro threatened in all of the remaining innings, but the Post 142 defense and pitching was up to the task of preventing runs to score. Jacob Mathews took over pitching duties in relief of Mettler in the fifth inning to pick up the save.

“Lane was solid on the mound for us. He was a bulldog and gave us five quality innings,” said Waverly coach Jonathan Teeters. “Jacob came in relief and shut the gas off for us. I’m very proud of both of them.”

The second game was even closer than the first, needing an extra inning and a wild pitch to record the 2-1 victory over Portsmouth Post 23.

The Shockers took the early lead when Kannon Pack drew a two-out walk in the opening inning, stole second and third, and then later came home on single from Lane Mettler, 1-0.

That lead held until the top of the sixth when Portsmouth turned a walk and an error into the tying run, 1-1.

By the end of the seventh inning, the 1-1 tie held, forcing the teams to go to the eighth inning. The Shockers had their chance in the bottom of the eighth. Leadoff batter Easton Lansing reached first base, ushering in the speedy Alex Boles as a pinch runner. A few plays later, Boles was able to score the winning run on a wild pitch with the bases loaded, creating the 2-1 victory that propelled the Shockers to the championship battle on Tuesday at 6 p.m.

Pitching was a highlight for the Shockers, as Cruz McFadden threw the first seven innings, giving up just one run on three hits, while striking out 10 and walking three. Derek Eblin added an inning in relief, striking out two batters and walking one.

“This was another quality outing for Cruz. He’s just tough to square up,” said Teeters. “Derek came in and threw very well.”

Hits were at a premium, as Portsmouth’s starting pitcher Reece Whitley logged six innings, giving up one run on three hits, while striking out 12 and walking six. Hunter Thomas had struck out one and walked two in relief.

“It was a tough game,” said Teeters. “I’m very proud of our team for how we handled ourselves with the adversity we faced.”

On Monday, the other three teams had to play each other to see which one would square off with the Shockers Tuesday night.

Hillsboro Post 129 and Chillicothe Post 757 met in the 3 p.m. battle, fighting their way to an 8-8 tie through seven innings. Chillicothe was able to break the tie and win on a walk-off in the bottom of the eighth inning, winning 9-8.

The Post 757 Colts then used that momentum to blast past Portsmouth in the second game of the night, winning 14-3 in five innings.

The Waverly Post 142 Shockers (14-9) and the Chillicothe Post 757 Colts were set to square off for the championship Tuesday evening. If the Shockers win Tuesday night’s game, the title is theirs. If they fall, they will return to action Wednesday evening to face the Colts again in double-elimination play. The winner of the Wednesday game, if it needs to be played, will be the champion.