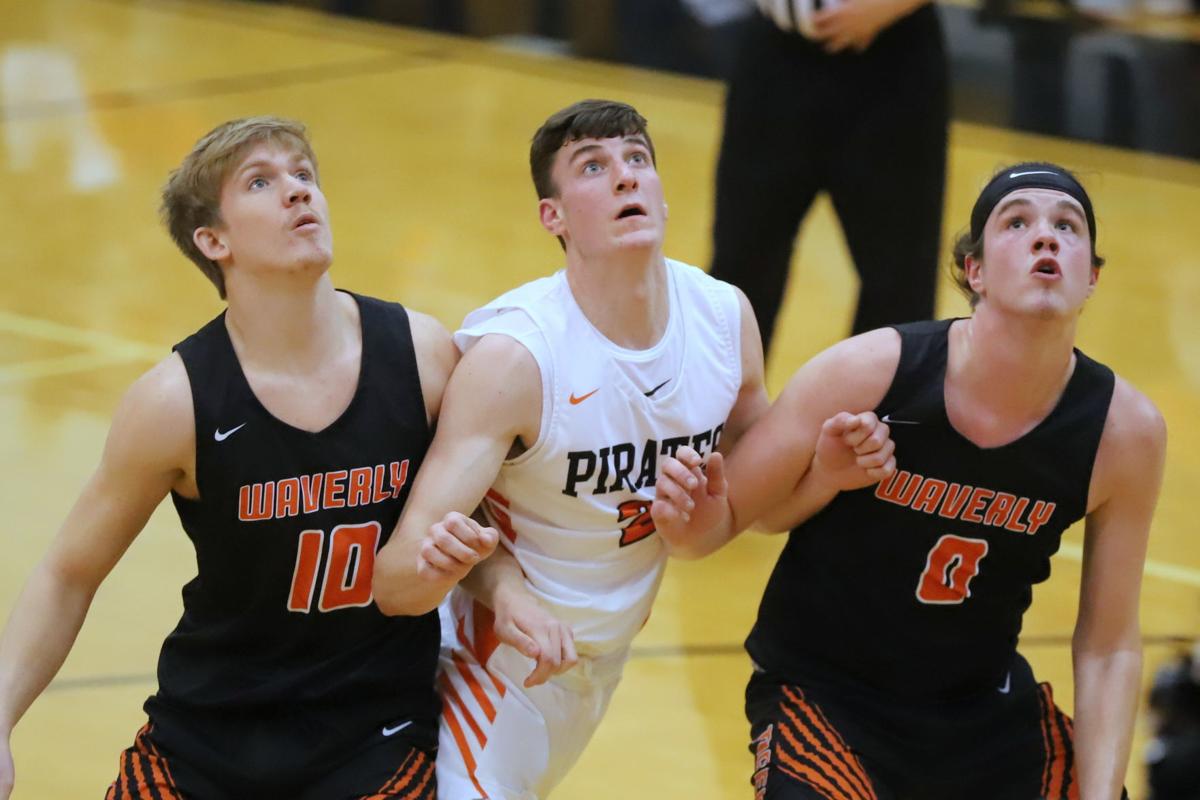 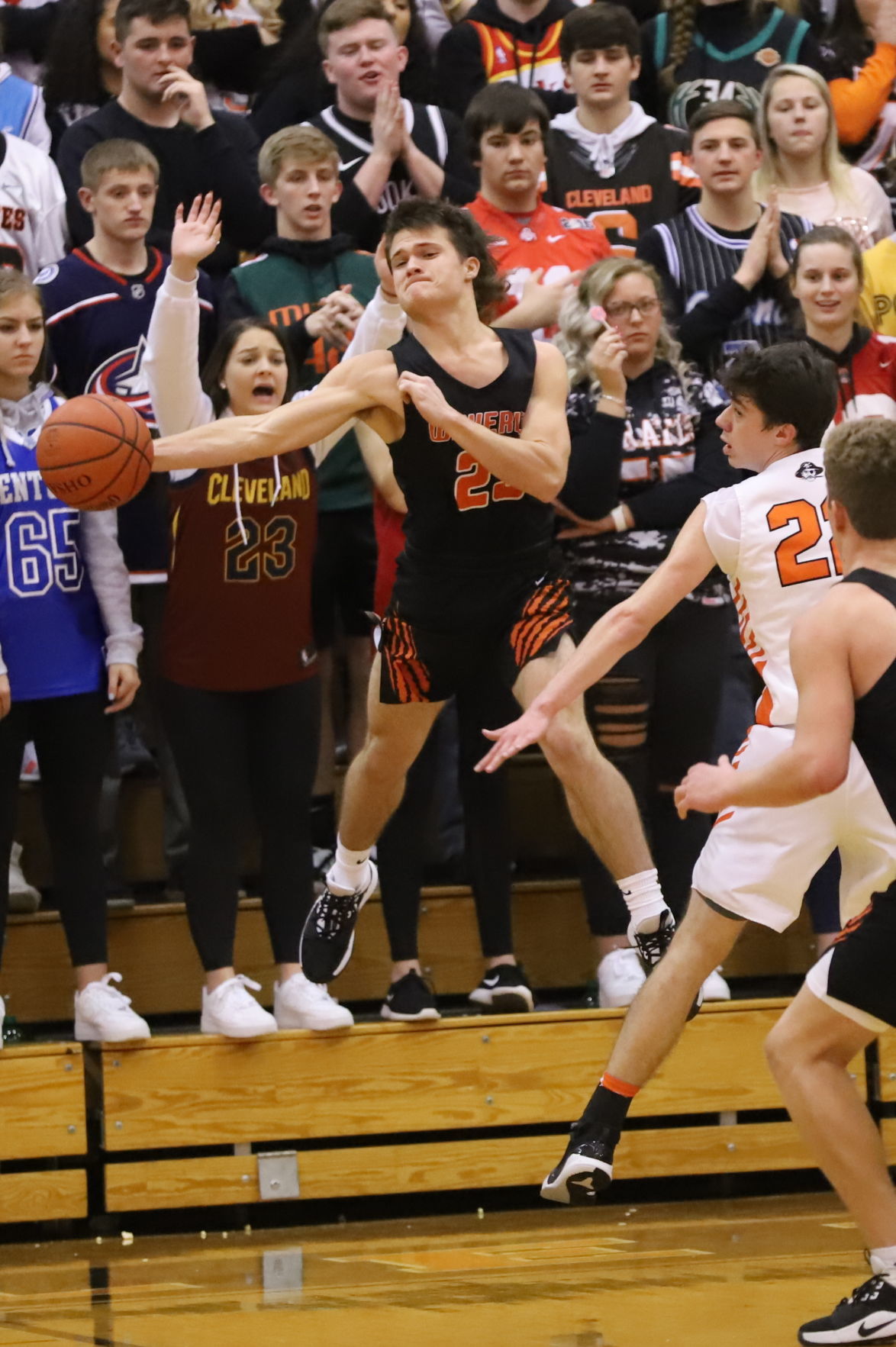 Waverly senior Michael Goodman saves a ball from going out of bounds. 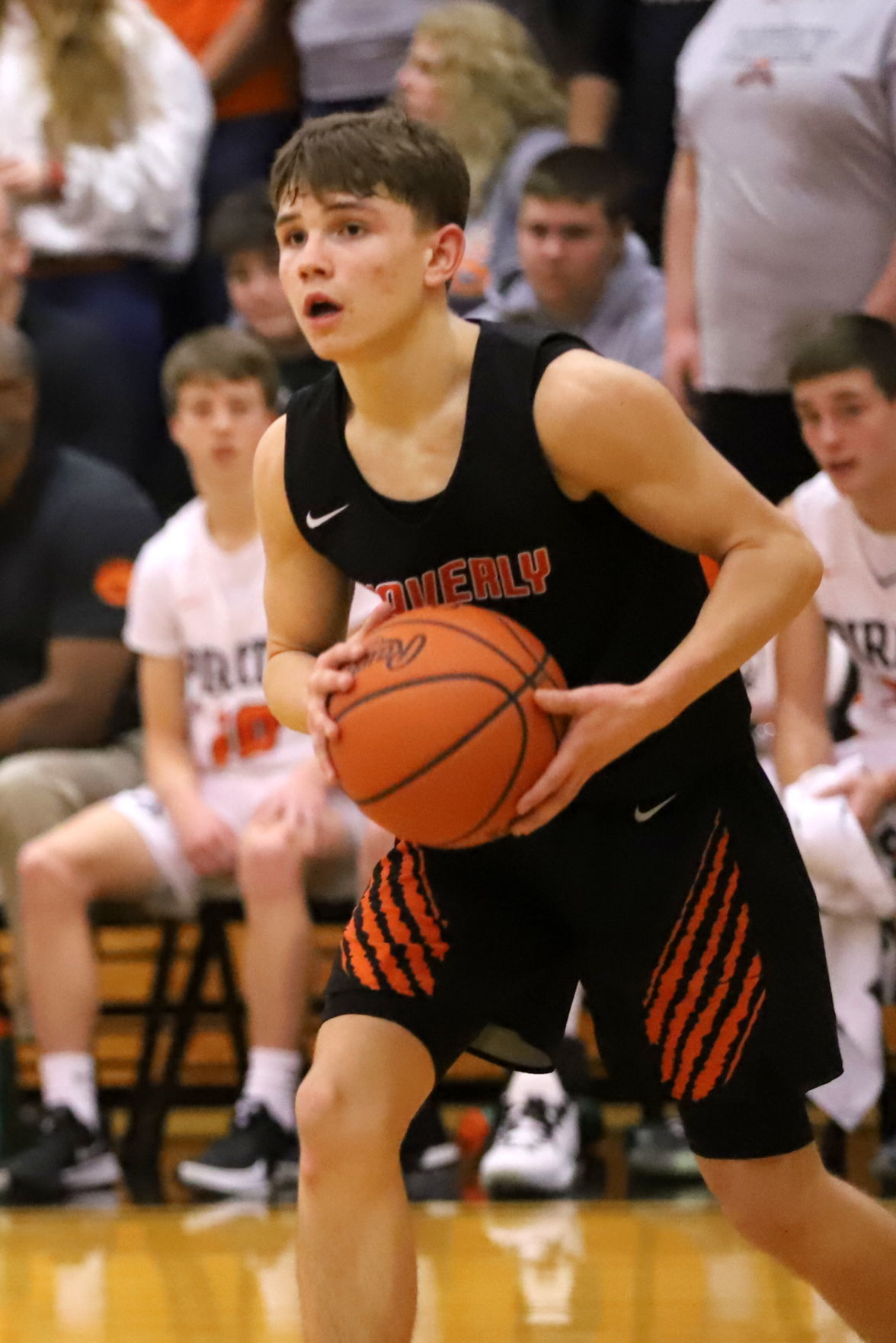 Waverly sophomore Trey Robertson looks to pass in the contest at Wheelersburg. Robertson scored 36 in the win. 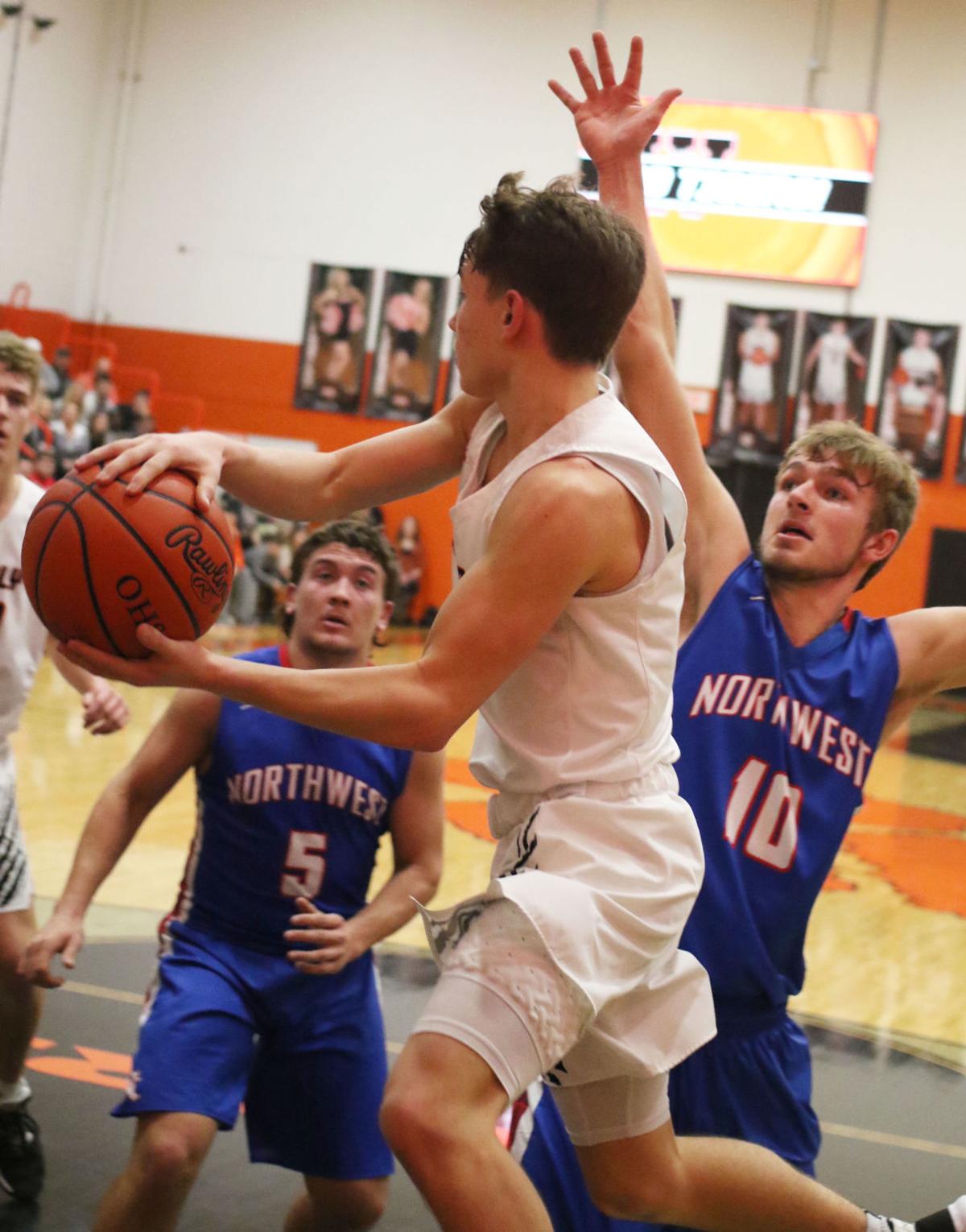 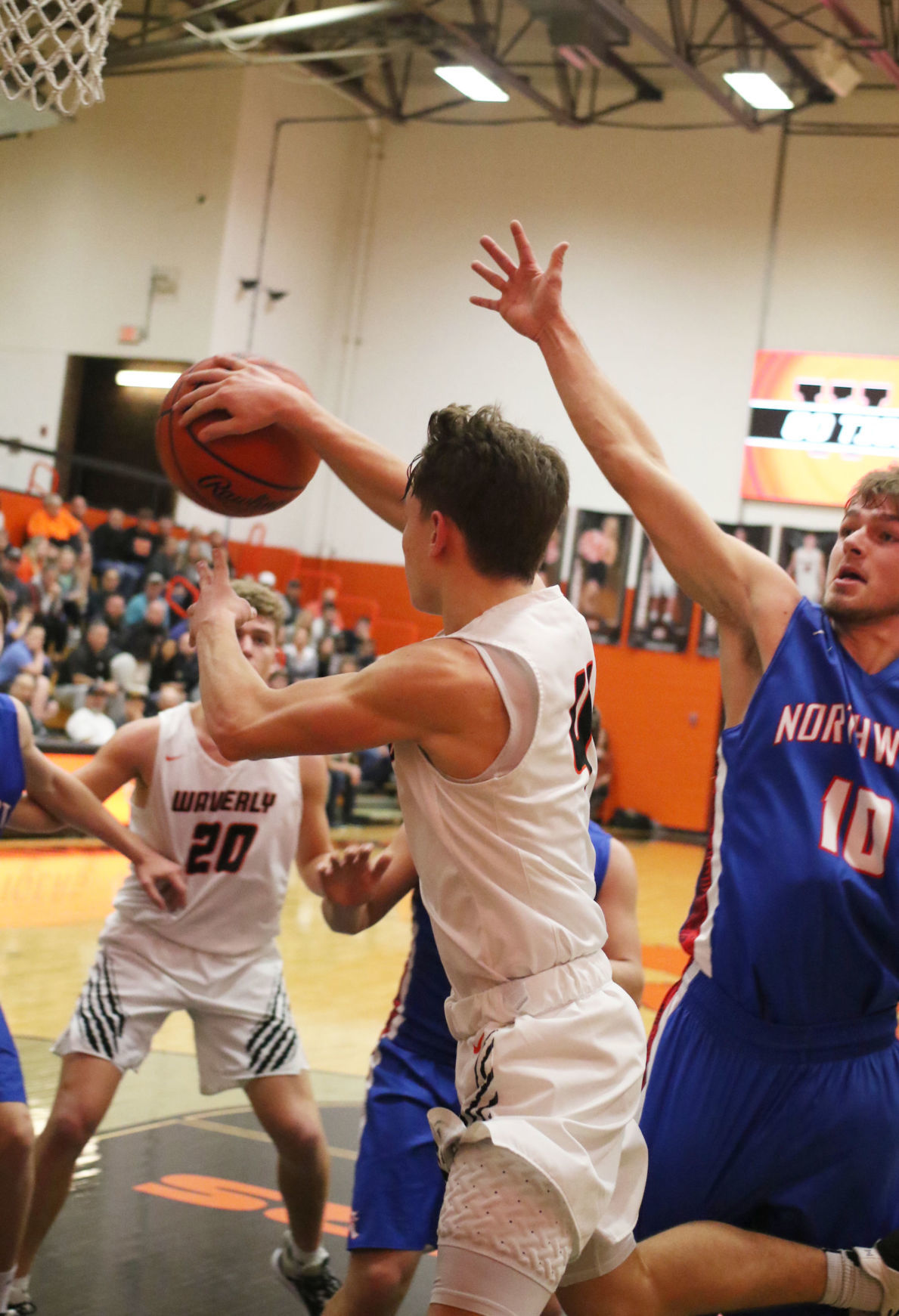 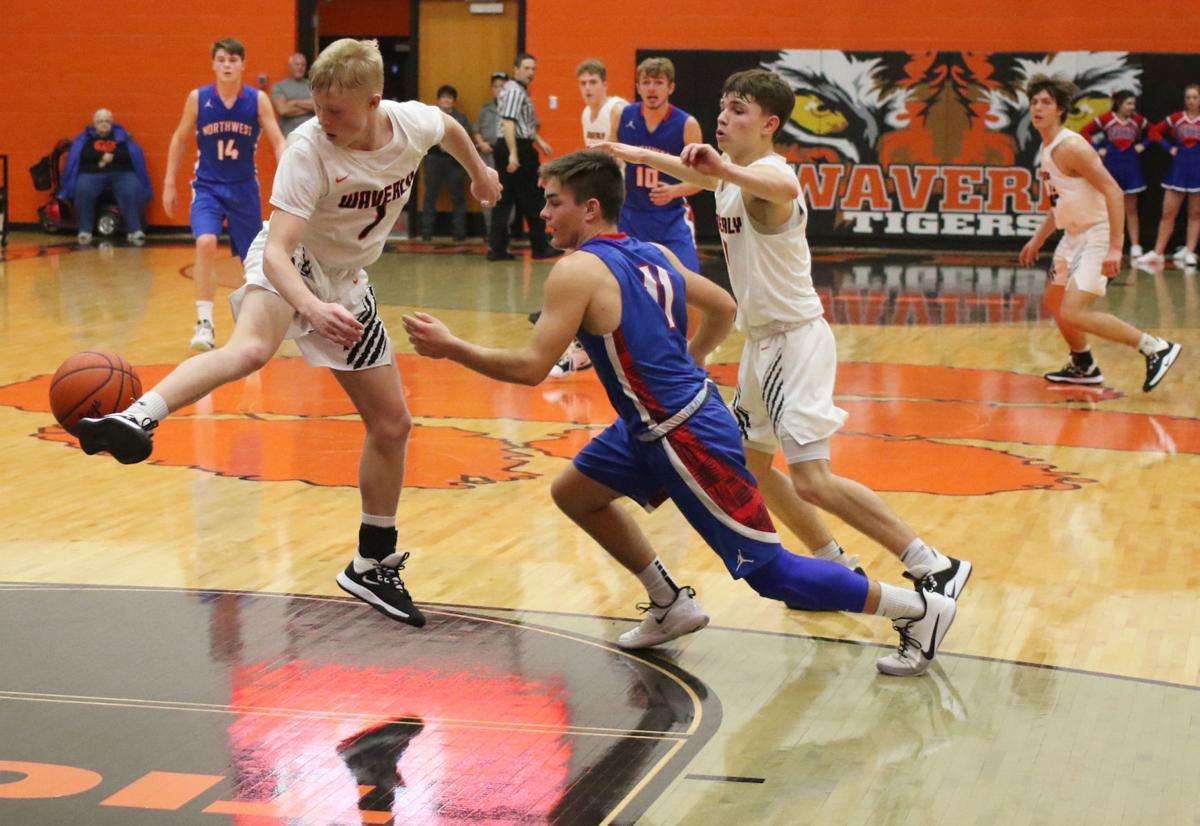 Waverly sophomores Mark Stulley and Trey Robertson team up to knock the ball away from the Northwest guard bringing it up the floor. 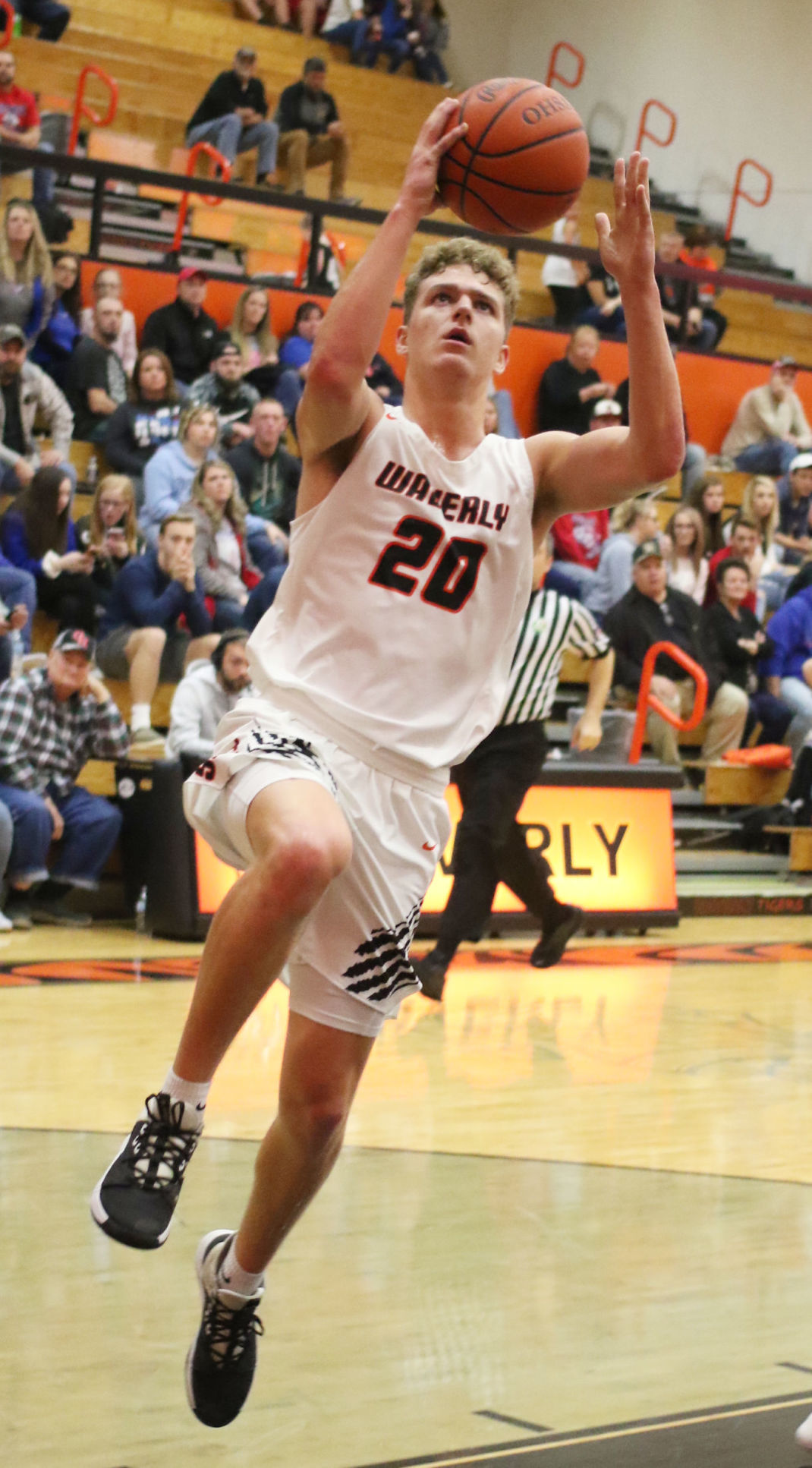 Waverly sophomore Will Futhey takes advantage of a pass from a teammate, scoring in transition.

Waverly senior Michael Goodman saves a ball from going out of bounds.

Waverly sophomore Trey Robertson looks to pass in the contest at Wheelersburg. Robertson scored 36 in the win.

Waverly sophomores Mark Stulley and Trey Robertson team up to knock the ball away from the Northwest guard bringing it up the floor.

Waverly sophomore Will Futhey takes advantage of a pass from a teammate, scoring in transition.

It was a big time game in a big time atmosphere that lived up to the hype, as the Waverly Tigers went into the Pirates’ lair and earned a 67-58 win, knocking Wheelersburg from the unbeaten ranks Tuesday evening.

Once the Tigers took the floor and took the lead in the opening quarter, their confidence continued to grow. Trey Robertson and Will Futhey powered the bulk of the offense in the opening quarter, as each produced seven points. Robertson had three buckets and a free throw, while Futhey had two buckets and a trifecta. Zeke Brown and Tanner Smallwood each had a bucket as well with the Tigers clawing ahead 18-14.

The second quarter saw the Tigers take a double-digit lead, putting up a game high 21 points with Robertson delivering 15 of those. Will Futhey added five points with a trifecta and a bucket, while Smallwood split a pair of free throws. At the break, the Tigers held a 39-26 advantage.

Coming out of the break, Robertson produced six of Waverly’s 12 points in the third quarter. Brown added four, while Futhey had a basket on a steal. The Pirates scored 15, trimming into Waverly’s lead just a bit, 51-41.

The final quarter saw the Tigers stay in control. Once again, Robertson scored half of the quarter’s points, producing eight of the 16. Smallwood added four, while Futhey and Michael Goodman had two points each. Robertson, Smallwood and Goodman combined to go 6-of-7 from the line, sealing the 67-58 win.

Robertson finished with 36 points to lead all scorers.

“Trey shot the ball well. The main thing was that he was aggressive offensively,” said Waverly coach Travis Robertson. “He had been hurt for a while and hadn’t had a very good shooting game for about three games. It was nice to see him get back on track.”

Will Futhey followed with 16 points, Tanner Smallwood added seven, Zeke Brown provided six points and Goodman added two on the free throws. Grayson Diener and Mark Stulley played but did not score. It was Stulley’s first action for the year since a preseason injury took him out of the lineup.

“We had positive minutes from everyone who stepped on the floor. Zeke did a great job defensively. Tanner and Will were awesome against Wheelersburg. Tanner had 15 rebounds and Will had 16 rebounds. They did a good job of controlling the paint. Their rebounds gave us opportunities to get out and score,” said Robertson.

“Mark is a big lift ball-handling wise. Mark has been around our program for a long time and has played a lot of basketball. You know what you are going to get every night from Mark. He’s tough, will get out and pressure the basketball defensively, and will be solid offensively. It gives us another ball handler. It brings a lot of depth. We can mix it up on the floor.”

The sense of urgency needs to be present for the Tigers, who found themselves in a three-way tie for the lead in the hunt for the Southern Ohio Conference Division II title. Waverly, Wheelersburg and Oak Hill all have just one loss each. Waverly’s win was also Wheelersburg’s first loss.

“Every game is important. We can’t afford to drop one. I hope these guys realize what we are fighting for at this time of year. We have to take care of business in the league,” said Robertson. “Out of league games, we have Fairland Saturday which would be a huge win for us in the Chesapeake Beast of the Southeast. That is one of those games which can be a resume builder for tournaments.”

On Friday night, the Tigers survived a third-quarter lull to roll to a commanding 61-42 win over the visiting Northwest Mohawks.

The visitors from Scioto County didn’t allow the Tigers to have an easy time of it. After the Tigers won the tip, Waverly senior Tanner Smallwood delivered an alley-oop pass to Zeke Brown for an easy bucket, Waverly’s defense forced a turnover, allowing Will Futhey to collect an offensive rebound and score the next bucket. That 4-0 lead disappeared when the Mohawks rolled back with six points over the next two minutes, as Northwest briefly moved ahead 6-4.

Brown was able to return the favor to Smallwood, setting him up for a bucket to bring the game to a 6-6 tie. Smallwood had the next bucket to put the Tigers ahead.

Defensively, the Tigers forced more turnovers as they continued a run. Mark Stulley delivered a pass to Robertson for a three-pointer with Brown setting a screen. After a Northwest miss, Michael Goodman secured a defensive rebound and fired it ahead to Robertson for a layup, making the score 13-6. Robertson scored again when Goodman and Stulley doubled-teamed the Mohawk ball-handler for a turnover. Goodman had a baseline drive and dish to set Futhey up for a bucket underneath. Futhey also had the final basket of the quarter. The Mohawks snapped Waverly’s 15-0 run after Brycen Carver blocked a shot and Nathan Rivers had the chance to score on the other end, making it 19-8.

Robertson dialed long distance for a trifecta to open the second quarter. A turnover followed before Futhey had Waverly’s next basket, opening up a 24-8 lead. The Mohawks didn’t seem phased, as they came right back to cut the score down to five, 24-19, with 11 unanswered points. Once Stulley snapped the lull with his first bucket of the night, that was the beginning of an 8-2 run to end the half and put the Tigers up by 11 again at the break, 32-21.

The Mohawks continued to fight, trimming Waverly’s lead back to single digits early in the third quarter, eventually cutting it down to four by the end, 40-36. Brown provided the initial bucket before Northwest stormed back with a 6-0 run, 34-27. They stayed within seven until the final seconds of the quarter when Blake Carver connected on a three-pointer to cut it down to four.

Starting the fourth quarter, Goodman collected an offensive rebound and scored just after Wade Futhey’s three-point attempt bounced off the rim. Northwest answered with a bucket from Brycen Carver to stay within four, 42-38. Then the Tigers began their final run.

Over the next five minutes, Waverly outscored Northwest 17-2 to take control, up 61-40. Billy Crabtree had the final bucket for the Mohawks to cut it to 61-42.

Although the scoreboard showed a 19-point victory, Coach Robertson wasn’t satisfied with the effort.

“I knew coming off an emotional win at Wheelersburg, it was going to be difficult to come out with that same type of hunger. That’s what I have to pull out of these guys. We have to start building good habits. It doesn’t matter who you are playing. We have to make sure we prepare the same way mentally and physically for every game,” he said.

“Tonight I thought we had a little bit of a letdown. We started the game okay, but in the second and third quarter, we let off the pedal. That gave them (Northwest) some confidence.”

The fourth quarter output came because the Tigers did what they were supposed to do on on the court.

“I didn’t really feel like we were in trouble when they were within four.

We went up by 19 in a hurry,” said Robertson. “It was all because we didn’t turn the ball over, we sat down and played defense. We outrebounded them for a little while and got out in transition to get easy baskets. That’s all effort. Early in the game, we weren’t putting out that kind of effort. Effort is our identity. We have to outwork people to get wins.”

Will Futhey led the Tigers with a double-double of 20 points and 11 rebounds. Trey Robertson scored 15, made off with five steals and gave out seven assists.

With the win, the Tigers improved to 9-2 overall and 6-1 in the SOC II. They were scheduled to play the 8 p.m. game in Chesapeake’s Beast of the Southeast on Saturday night against the Fairland Dragons.