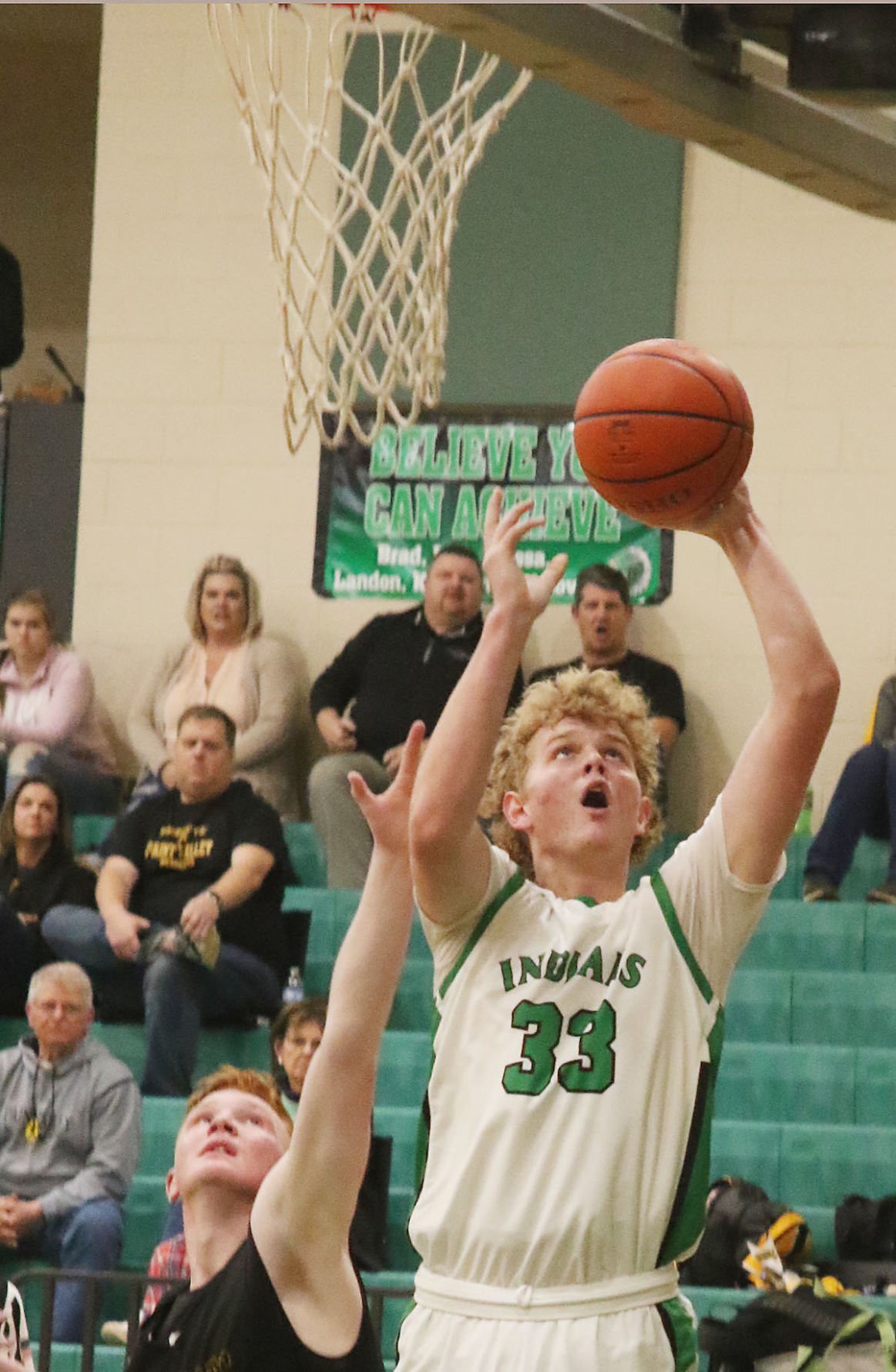 Western senior Broc Jordan uses a spin move to get around a defender and score during the fourth quarter of Saturday’s win over Paint Valley. Jordan made the shot, drew the foul and hit the free throw to complete a three-point play to give the Indians a six-point lead, 59-53. 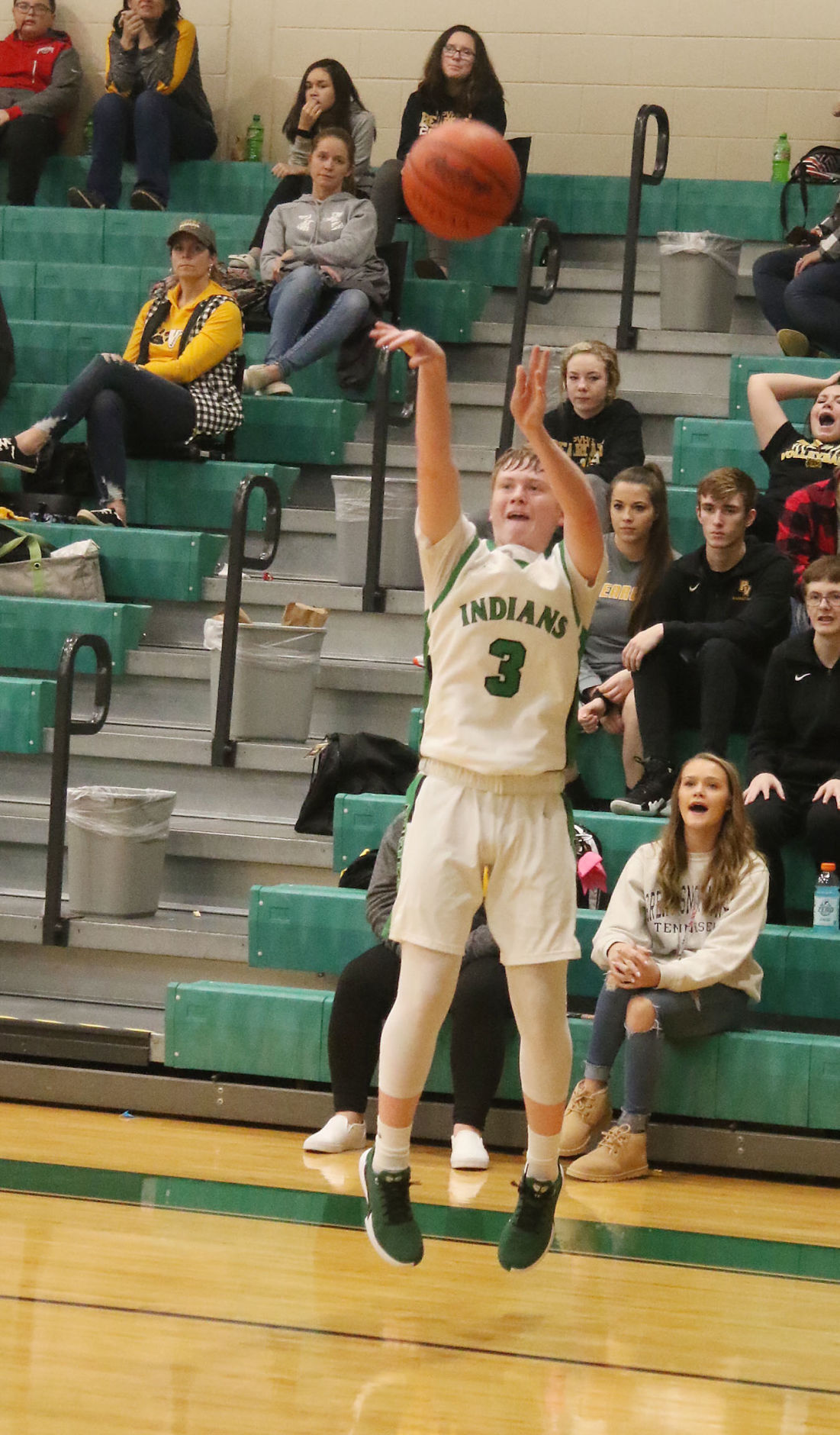 With Paint Valley students yelling in the background, Western’s Coleman Gibson fires up a three-pointer and hits it during the fourth quarter of Saturday’s game, giving the Indians a 64-57 lead at that point.

Western senior Broc Jordan uses a spin move to get around a defender and score during the fourth quarter of Saturday’s win over Paint Valley. Jordan made the shot, drew the foul and hit the free throw to complete a three-point play to give the Indians a six-point lead, 59-53.

With Paint Valley students yelling in the background, Western’s Coleman Gibson fires up a three-pointer and hits it during the fourth quarter of Saturday’s game, giving the Indians a 64-57 lead at that point.

Continuing their trend of victories in the new year, the Western Indians won their third varsity basketball game in a row Tuesday evening, Jan. 7, defeating East 58-9.

Every player on the Western varsity roster saw court time in the game. The Indians pushed out to an 11-2 lead after the opening quarter, led by Maveric Ferneau’s six points. Kolten Miller also dialed up a triple, while Noah Whitt added a basket.

Ferneau led the way in the second quarter, unloading with 12 of his team’s 24 points. Broc Jordan scored eight points in the paint, while Austin Beckett and Noah Whitt added two each. At the half, Western led 35-3.

Ferneau added five points in the third quarter, bringing his evening’s total to 23. Miller and Beckett each added three points, while Shelden Richardson and Dylan Theobald both contributed a bucket.

In the final quarter, Colton Montgomery led the Indians by going 3-for-4 on the line. Sage Collingsworth was 2-for-2, while Beckett was 1-for-2. Miller had the only field goal.

Behind Ferneau’s 23 in the 58-9 win, Jordan and Miller each scored eight points, followed by Beckett with six points.

With the win, the Indians improved to 4-5 overall and 3-3 in Southern Ohio Conference Division I play. Their Friday night, Jan. 10 game against New Boston was moved to Wednesday, Jan. 15.

The Indians resumed action Saturday at home, riding a rollercoaster of momentum to a 73-62 triumph over the visiting Paint Valley Bearcats.

Despite several Paint Valley attempts to take control early, the Indians were able to use a strong second quarter to take a double-digit lead by halftime. Coming out of the break, the Bearcats put up a good fight in the second half, trimming Western’s lead down to one, 54-53. But the Indians had the opportunity to record a stop and followed with big baskets from seniors Coleman Gibson and Broc Jordan to regain a more comfortable lead, ultimately leading to the double-digit 73-62 win. It was the fourth victory in a row for the Indians.

“We did a really nice job in the first half. Paint Valley did what we thought they would do in the first half, playing us in half-court man (defense). They are down a player with one of their starters being out (Cruz McFadden). We felt like we were better athletically at least quickness-wise,” said Western coach Doug Williams.

“I wouldn’t have bet that they would press us. And they didn’t (in the first half). But when they got down 16, Coach (Robert Williams) went to what he had to do. I would have bet we could handle that press, but for whatever reason tonight, we didn’t. I think it was a combination of not expecting it, but also it got a little rough and bumpy. Sometimes games happen like that. I’m proud of our kids for sticking it out at the end.”

To open play in the Saturday evening contest, Western senior Broc Jordan put the first points on the board in the game, providing the initial bucket. Paint Valley bounced back with five straight points, using a triple from Cordell Grubb and a bucket in the paint from Bryce Newland. With Western senior Maveric Ferneau heating up from the outside, the Indians moved ahead again. Ferneau hit his first trifecta to tie it at 5-5. After a Bearcat turnover, he hit again to make it 8-5. Ferneau’s next triple made the lead 11-7.

Paint Valley followed by taking its second and final lead of the half, using a five-point burst to go up 12-11. Shelden Richardson regained the lead for Western with an offensive rebound, basket and free throw, 14-12, before the Bearcats tied it at 14-14. Ferneau put his team in front again by getting to the line, hitting the first of two with 1:56 left on the clock. The two teams battled through the final two minutes, but Western guard Colton Montgomery was able to score on a drive and then a pull-up jumper to make the lead 19-14 to wrap up the quarter.

Montgomery continued driving to start the scoring in the second quarter. Paint Valley’s Newland had an answering bucket, 21-16. Western sophomore Kolten Miller dialed up a three-pointer before Bearcat Brock Blanton cut the lead to six for the final time in the half, 24-18. Paint Valley was held without a field goal for the rest of the second quarter.

For Western, Montgomery had a pair of free throws to push the lead to eight once again. Newland was able to draw a foul on the Bearcat possession, hitting one-of-two. Then a defensive rebound from Broc Jordan gave teammate Coleman Gibson the chance to hit a three-pointer, making the lead 10, 29-19. Shelden Richardson had the next defensive rebound. After a missed shot attempt, Ferneau collected an offensive rebound and fired it to Gibson for a bucket to make the lead 12.

Paint Valley trimmed it to 11 briefly after a free throw from Grubb, 31-20. But Western continued to control the pace and win the rebounding battle. Jordan, Richardson and Ferneau all collected defensive rebounds. Richardson also scored the next four points with Ferneau having the final free throw to make the lead 36-20 at halftime.

Coming out of the break, Western was dealing with foul trouble and the Bearcats took an opportunity to make a run, cranking up the pressure. Richardson helped keep the lead at 16 early, drawing a foul on an offensive rebound and hitting both of his freebies. But the Bearcats followed that with an 8-0 run, trimming the advantage to single digits, 38-30. Gibson broke Western’s drought by hitting a runner at the foul line, making the lead 10. Austin Beckett swished a pair of free throws on Western’s next possession to maintain that 10-point advantage, 42-32. Newland scored the next four, getting his team within six, 42-36.

The two teams traded baskets the rest of the way. Montgomery connected on a pair of free throws, and later delivered an assist to Dylan Theobald for an easy bucket in the paint, 46-40. Beckett had back-to-back baskets for Western, scoring one on a press break. A pair of free throws from Ferneau helped the Indians maintain their six-point lead going to the final quarter, 52-46.

A pair of quick buckets from Grubb and Newland saw Paint Valley pull within two to start the fourth quarter, 52-50. Gibson came back to give the Indians some breathing room, using a spin to score around a defender. That room was needed as Grubb pulled the Bearcats closer, connecting on a triple to get within one, 54-53. Gibson gave his team some more space by driving and pulling up for a bucket around the foul line. Western forced a turnover, allowing Jordan to score and draw a foul for a three-point play, extending the lead to six, 59-53.

The Indians continued to share the ball and worked to pull away again. After Bearcat Jackson Williams hit, Montgomery went coast-to-coast to score and keep the lead at six. The Bearcats scored again. Then Jordan drew defenders inside before sending the ball out to Gibson for an open three, 64-57. Jordan added a block defensively before Grubb scored to cut the lead to five for the final time, 64-59. Miller added a free throw on Western’s next possession. A pair of defensive rebounds from Noah Whitt followed, eventually leading to Richardson going to the line, making the lead seven again, 66-59, with 2:30 remaining.

Paint Valley cut the lead to six a final time on a free throw from Trent Mettler. Then Ferneau added a pair for the Indians, extending the lead to eight, 68-60. Whitt set up the next basket, intercepting a Paint Valley pass and firing it to Ferneau, 70-60. Grubb delivered the final Bearcat basket before Ferneau finished with a three-pointer, giving the Indians the 73-62 win.

Western’s balanced attack saw four players finish in double digit scoring. Ferneau led the way with 20 points, followed by Gibson and Montgomery with 12 points each, and Richardson with 10 points. Grubb led Paint Valley with 21 points, followed by Newland with 20 and Mettler with 10.

All season long, Williams has known his team would experience growing pains as they continued to find new roles in a new system.

“Western was a guard heavy team last year, and they had Lane Brewster who could really score the ball. The rest of these guys were role players. In the first six games of the season, our guys have been struggling to understand what their roles are,” said Williams.

“Maveric Ferneau has started hitting shots. He took open shots in the first six games that we played, and they just weren’t going in. We’ve switched up our offense a little bit. It is the same principles with our spread offense, but we have moved Broc in full time. We would like to go further with this. Our change in our offense has helped us a little, as well, with our kids understanding where they are supposed to be.”

With the win, Western improved to 5-5 overall. The Indians also stood at 3-3 in Southern Ohio Conference Division I play going into Tuesday’s game. They will play New Boston at home on Wednesday, Symmes Valley at home on Friday and then head to Eastern on Saturday evening. The New Boston game was supposed to be played on Friday, Jan. 10, but it was changed due to a request.

“Coach (Adam) Cox called me and asked me to move the game. He told me his daughter was a senior at South Webster and she was going to be in homecoming on Friday (Jan. 10),” said Williams. “It jam packs our week. They (the games) are all going to be tough. But the Dad in me said yes. I would hope someone would honor a request for me if I was in that situation.”