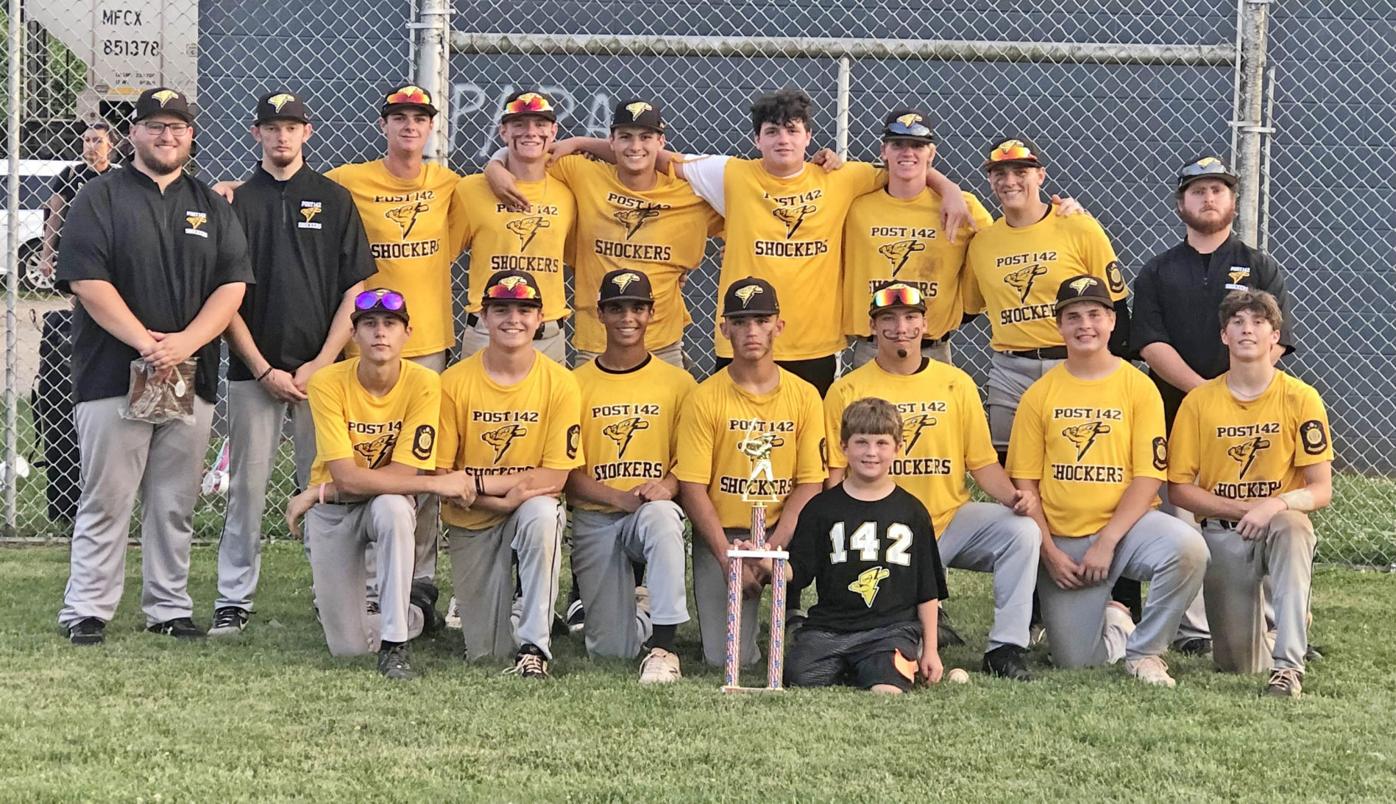 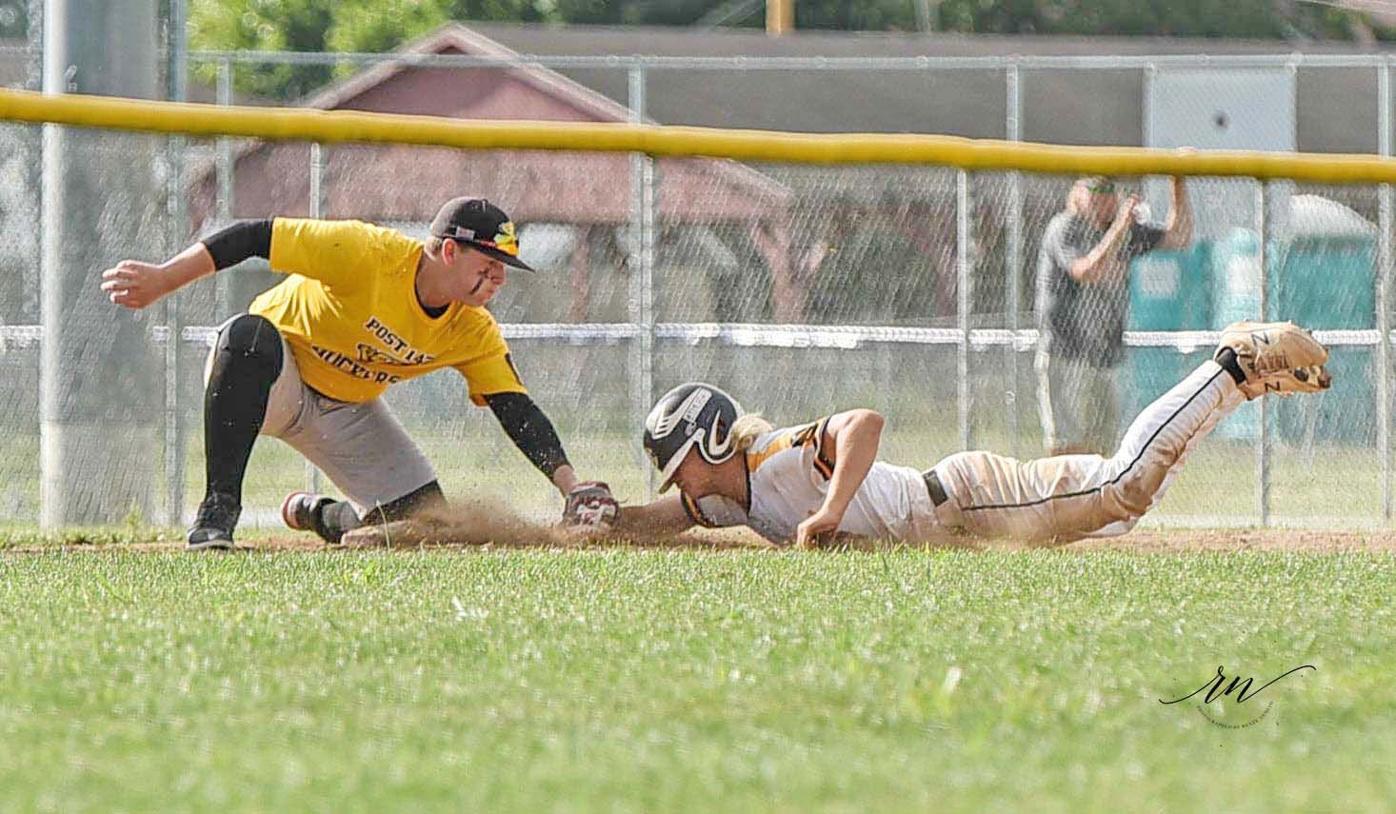 Playing at third, Shocker Aodhan Queen applies the tag to a Chillicothe Post 757 player as he tries to slide into the base.

Waverly Post 142 shortstop Jase Hurd tags a Chillicothe player as he slides into second base. 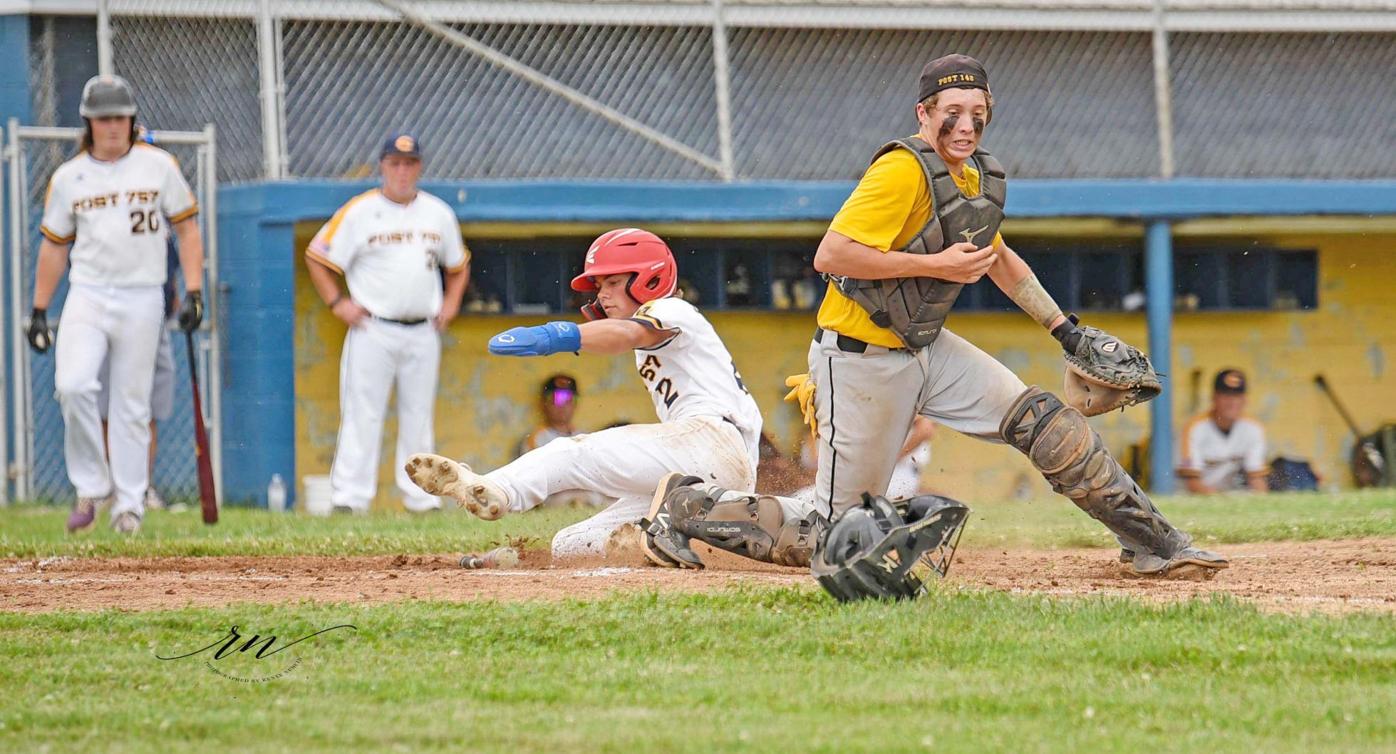 With his mask off, Post 142 catcher Christian Horn makes a play for his team at home plate.

Playing at third, Shocker Aodhan Queen applies the tag to a Chillicothe Post 757 player as he tries to slide into the base.

Waverly Post 142 shortstop Jase Hurd tags a Chillicothe player as he slides into second base.

With his mask off, Post 142 catcher Christian Horn makes a play for his team at home plate.

Momentum is a game changer when it is on your side.

For the Waverly Post 142 Junior Shockers, capturing the momentum allowed them to fight their way through the regional tournament over the weekend and win the championship by taking a double header over Chillicothe Post 757 Monday evening. The finale featured a resounding 23-4 triumph that will send the Junior Shockers to the Ohio American Legion Junior State Tournament Thursday evening at Lancaster’s Beavers Field.

The road to the state tournament wasn’t easy. The Chillicothe Post 757 Colts have had Waverly’s number lately and handed the Shockers their first loss on Friday afternoon in the double elimination tournament. That meant the Shockers needed to go undefeated the rest of the way, including winning both games of a double header over Chillicothe to capture the title Monday night.

“We beat them the first time we played them, but they had our number in the next three games we met up with each other,” said Waverly Junior Legion Head Coach Trey Clemmons. “They are a very well coached team with a lot of talented players. It showed a lot of hard work from our team to have a goal in front of them (State Championship) and to do what was needed to achieve that goal.”

The tournament began at Teays Valley High School Thursday where the Junior Shockers won the opener, dominating Portsmouth Post 23 by a score of 11-1 in a game that started around 10 a.m. The weather presented another challenge, as Waverly was to play Chillicothe at 4 p.m., but rain forced that game to be postponed until Friday and slated for early afternoon.

Returning to Teays Valley to battle Chillicothe Post 757 on Friday, the Junior Shockers suffered an 8-1 loss, despite out-hitting the Junior Colts 10-5. Errors were a factor for Waverly.

That meant the road to the championship would be much harder for the Shockers, as they had to play through the losers’ bracket and not suffer another loss. Post 142’s pitching depth paid off, and the batters were confident.

In their second game of the day, the Shockers wrapped up a 4-2 triumph over Portsmouth Post 23, eliminating the Scioto County team from the tournament.

Waverly’s Quinton Hurd went the distance on the mound for the complete game victory, recording seven strikeouts. He gave up two runs on six hits and walked just one batter.

Offensively, Aodhan Queen led the charge, going 3-for-3 with a double and two RBIs. Ben Nichols was 2-for-3 with an RBI, while Hunter Edwards was 1-for-3 with a run and an RBI. Jase Hurd also had a pair of hits, while Chris Queen doubled.

The Shockers had to wait and see which opponent they would face next, as they had the task of facing the loser between Chillicothe Post 757 and Circleville Post 134.

Circleville ended up falling to Chillicothe, which meant the Shockers would need to knock off a Circleville team that had handed them a pair of losses during the regular season, including a 7-3 defeat on Tuesday, July 6.

It was a grinder with Circleville Post 134, but the Shockers continued to roll, winning 3-2. All of the offense for both teams came in the fifth inning.

Circleville issued three free passes to Waverly batters in the top of the fifth, eventually resulting in three runs.

Post 134 managed to rally for two runs in the home half the frame, but the Shockers ended the threat, stranding two Circleville runners. The final score was 3-2 in favor of the Post 142, eliminating the Pickaway County team.

For the Junior Shockers, Borland started on the hill and piled up 12 strikeouts in 6-1/3 innings. Moore finished it to notch the save. Jase Hurd, Hunter Edwards and Malik Diack tallied one RBI each.

That triumph meant that the Junior Shockers would meet up with Chillicothe Post 757 once again in the championship, which was slated for Saturday. If Chillicothe won the opener, the Colts would be champs. If Waverly won the opener, another game would need to be played to determine the winner in the double elimination tournament.

Once again, weather was a factor, forcing the clash between the two teams to be moved to Chillicothe’s Mount Logan School on Monday evening.

In game one, the Junior Shockers had to come back from a 5-2 deficit to win 7-5.

Waverly struck first, plating a pair of runs in the top of the third inning. Chillicothe responded by generating five runs in the home half to nab the three-run lead.

Having come through multiple battles to get to that point, the Shockers won another one. They countered by taking the lead right back in the top of the fourth inning with four runs, 6-5, when three singles were followed by three walks.

With no lead seeming safe, Post 142 tacked on an insurance run in the top of the sixth to seal the 7-5 triumph and force another game.

Malik Diack plcked up the pitching victory with six strikeouts. Garrett Moore added another save and was 1-for-3 with a run and an RBI. Christian Horn didn’t have a hit, but generated two RBIs.

The confidence and momentum gained by Waverly Post 142 led to an offensive explosion in the form of a 23-4 five inning victory in game two, sealing the championship in a dominating fashion.

The Colts had run out of arms. They put six different players on the mound, but the Shockers just kept working, generating 13 hits and 12 walks in total.

“The first game was a battle. Both teams didn’t show any quit, and I was confident in our team after that win to come back ready to play and win the second one. We had 13 team hits in the second game and that shows this was a true team victory,” said Clemmons.

“We play in a tough league and have had our ups and downs in it. With a lot of our players having vacations, and balancing time between two and sometimes three different sports, it can be hard to lose focus. However, we didn’t let that get to us. These boys came ready to play this weekend and worked their butts off to be the champs.”

Chris Queen pitched four innings and recorded the win with one strikeout. Jase Hurd pitched the final inning. Christian Horn led the way in RBIs with five, going 2-for-3 with four runs. Jase Hurd produced four RBIs on a 2-for-4 effort that included a double and a run. Carter Nickel was 2-for-3 with three runs and three RBIs. Aodhan Queen, Hunter Edwards, Malik Diack and Chris Queen all added two RBIs.

It is the first regional championship for Waverly’s Junior Legion team since the 2012 season.

Clemmons described the run through the tournament as extremely exciting, adding, “It’s been a few years since the Shockers won the Regional Tournament, and we have a young coaching staff who are in their first year coaching, so it means a lot. This is a special group of boys who deserve all the recognition and I’m excited to see what we have ahead of us! On to win a state championship!! Hats off to all the players, coaches and the parents/fans who come to cheer us on! ‘Shock Em!’”

The Shockers will take their 12-7 record to Lancaster Thursday evening where they are scheduled to start play at 6:30 p.m. versus the winner between Greenville Post 140 and Utica Post 92. Those two teams will face each other at 1:30 p.m. The double elimination tournament includes six regional winners and continues through Sunday if necessary.