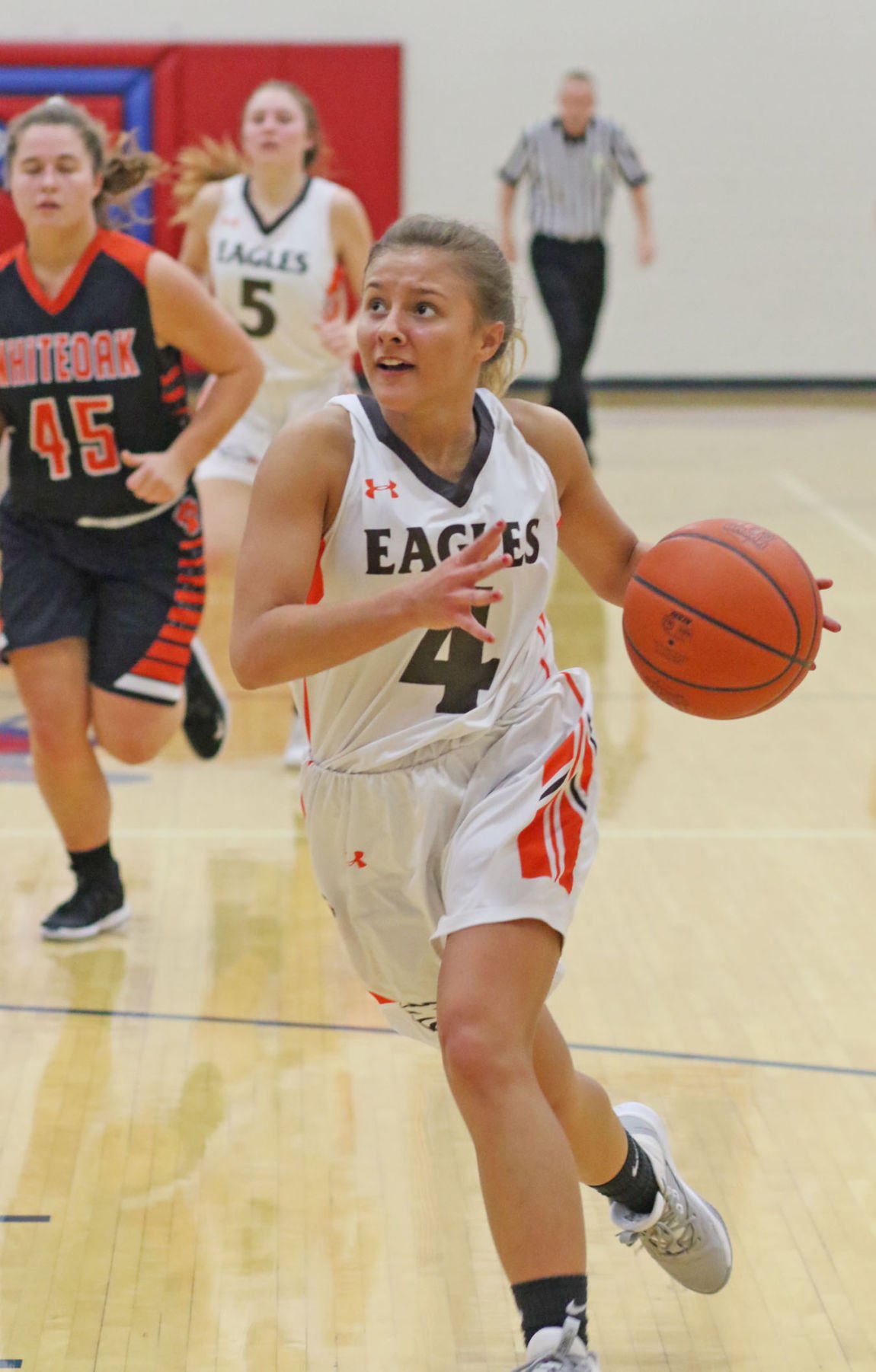 Eastern freshman Kelsey Helphenstine heads toward the basket after making off with a steal during the third quarter of Monday night’s game. 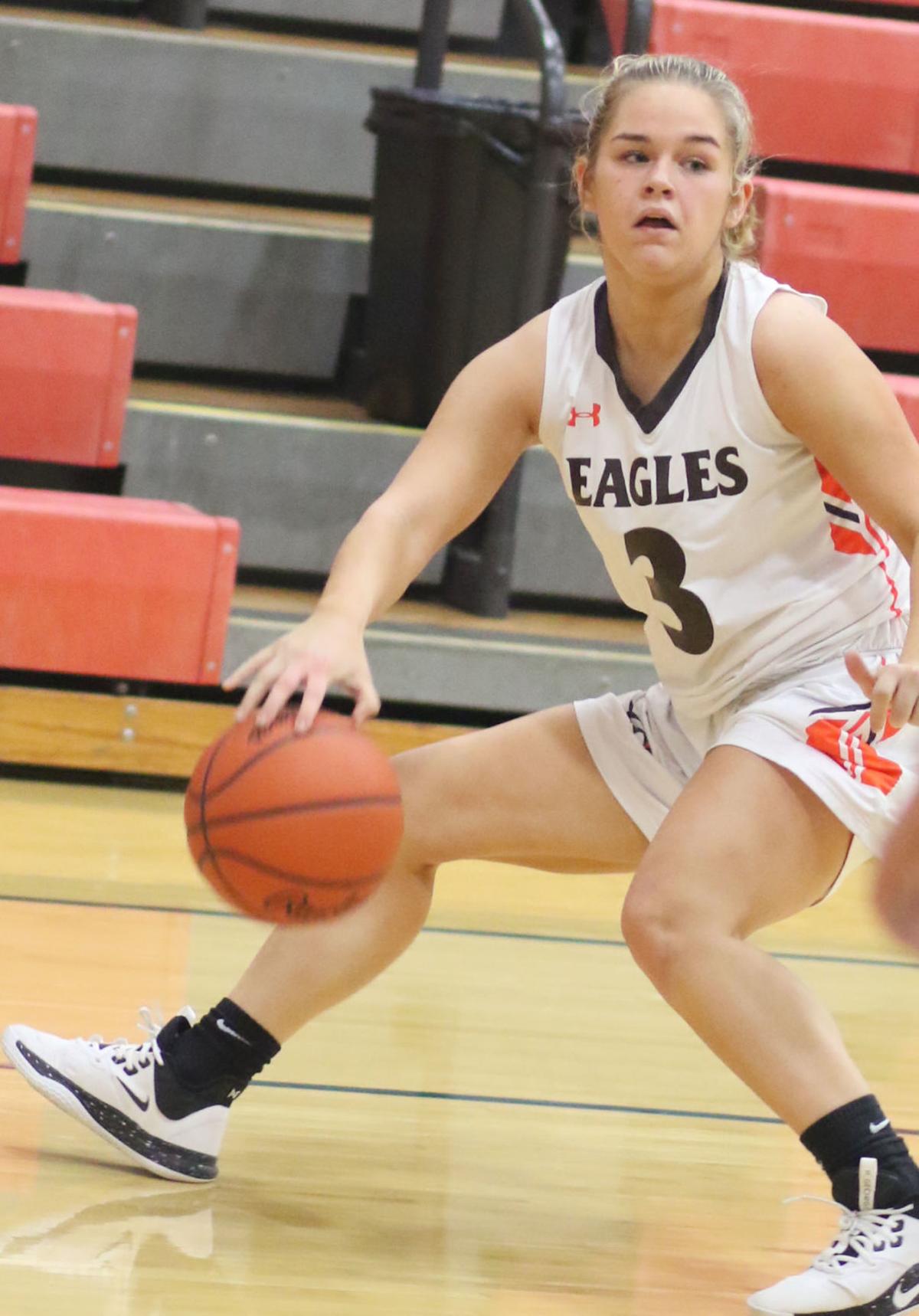 Eastern junior Skylar White dribbles around near the three-point line, looking for an open teammate under the basket. 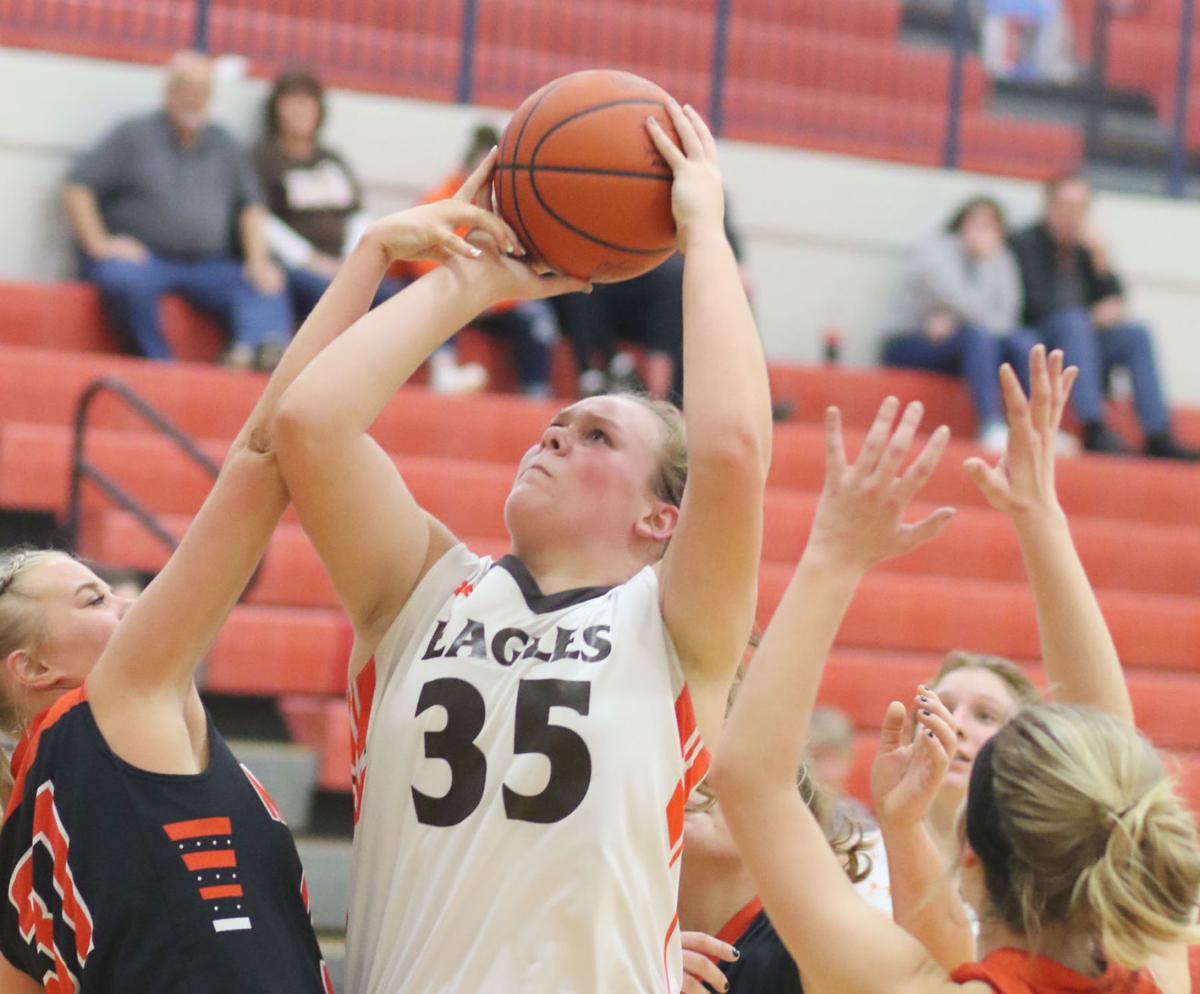 Eastern junior Andee Lester puts up a shot while getting fouled by a Whiteoak defender.

Eastern freshman Kelsey Helphenstine heads toward the basket after making off with a steal during the third quarter of Monday night’s game.

Eastern junior Skylar White dribbles around near the three-point line, looking for an open teammate under the basket.

Eastern junior Andee Lester puts up a shot while getting fouled by a Whiteoak defender.

Getting post-season play off to a strong start, the Eastern Lady Eagles flew to a 55-27 victory over the Whiteoak Lady Wildcats Monday evening in a Division IV sectional semifinal clash at Northwest High School.

With the win, the 13th-seeded Lady Eagles advance to a sectional final at Wellston High School Saturday at 1 p.m. versus the fourth-seeded Belpre Lady Golden Eagles.

“I’m happy we won. We were a better team than Whiteoak, but this will be our last win of the year if we don’t play better in the next one,” said Eastern coach Travis Hale. “If we give up that many offensive rebounds in the next one, we are going to lose. Belpre is a good team. They have a 1,000-point scorer and a 6-foot, 2-inch middle. We can play with them, but we have to play good basketball to be in it. We just have to rebound better.”

In Monday night’s game with Whiteoak, the Lady Eagles fell behind 4-0 before getting the offense started with a 7-0 run, thanks to baskets from Abby Cochenour and Addison Cochenour, sandwiched around a three-pointer from Mackenzie Greene. Whiteoak cut the Eastern lead back to one, 7-6, with a pair of free throws from Cylee Bratton at the midpoint of the opening quarter. That was as close as the Lady Wildcats could come for the rest of the game.

Near the two-minute mark, Andee Lester scored following a rebound, beginning a 12-4 run to close out the quarter. A pair of free throws followed from Abby Cochenour before Bratton hit again. Then Greene connected on her second three of the game, extending the lead to six, 14-8. Bratton scored once more, making it 14-10 before the Lady Eagles closed the quarter on a 7-0 run with scoring from Lester and Abby Cochenour. That made the lead 21-10.

The Lady Eagles continued scoring to open the second quarter, going on a 10-0 run with points from Abby and Addison Cochenour, as well as Skylar White and Chloe’ Dixon. By the end of that run, Eastern was ahead 31-10. Whiteoak’s Emmy Hawkins had her team’s first point of the quarter from the line to break the drought. Then Eastern added four more points with a pair of foul shots from Lester and a basket from Addison Cochenour. Whiteoak added another point from the line before the half ended when Lizz Edwards hit. At the break, Eastern led 35-12.

With the lead secure, the Lady Eagles worked to move the ball around in the third quarter, getting freshman Kelsey Helphenstine into the scoring action. Helphenstine had a pair of baskets that helped Eastern go up 43-15 by the midpoint. By the end of the quarter, Eastern led 46-18.

In the fourth quarter, Abby Cochenour and Andee Lester provided the early scoring before freshman Sofia Salisbury had the opportunity to swish the final bucket in the 55-27 win.

Abby Cochenour finished with a game-high 20 points, followed by Lester with 13 points and Greene with six.

“Foul trouble was big tonight. Mackenzie Greene stepped up big, Kelsey Helphenstine did well at times, and Chloe’ Dixon did well. We have to have other people score besides Andee and Abby. Abby is going to get her points. Andee is a beast on the boards,” said Hale.

“Abby is doing a good job of staying patient with her game. They were in a box-in-one for three quarters. We are going to continue to see those kinds of defenses. We are doing a great job of recognizing what they are in, and then trying to run what we can against it. Other players are going to be open. Mackenzie hit a couple of threes for us.”

The Lady Eagles will have a few days to prepare for Belpre. Game time is 1 p.m. Saturday at Wellston High School.