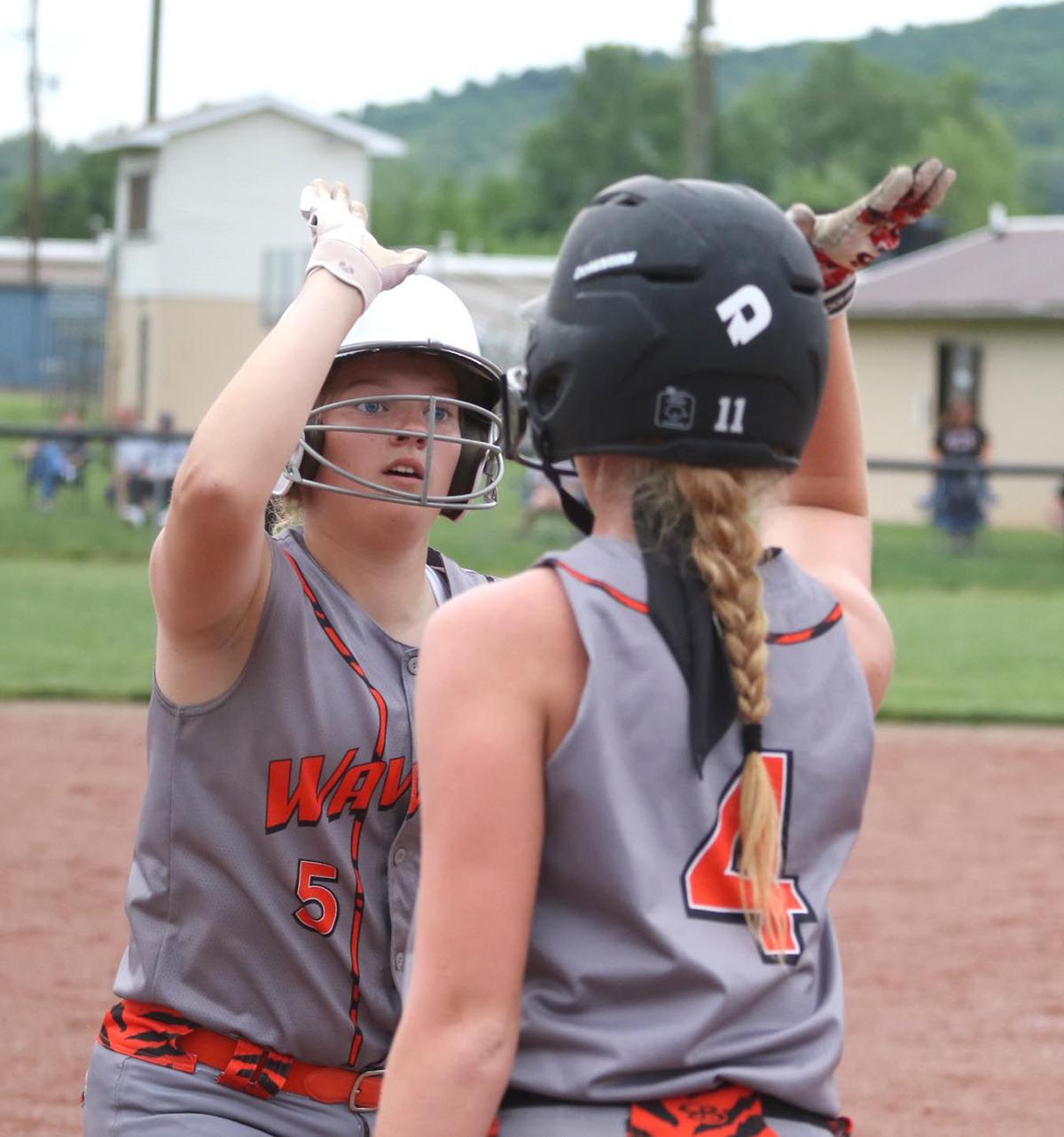 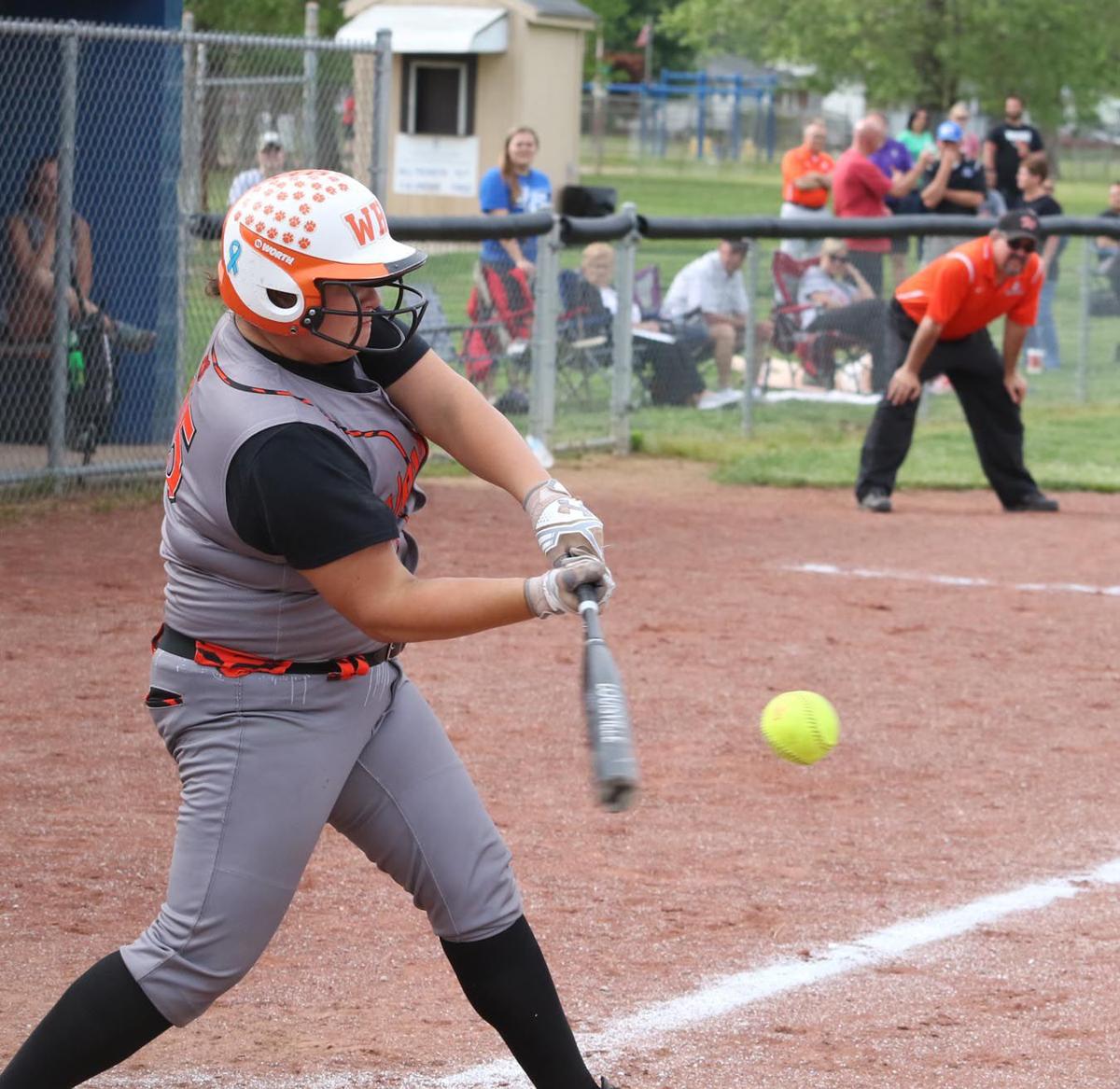 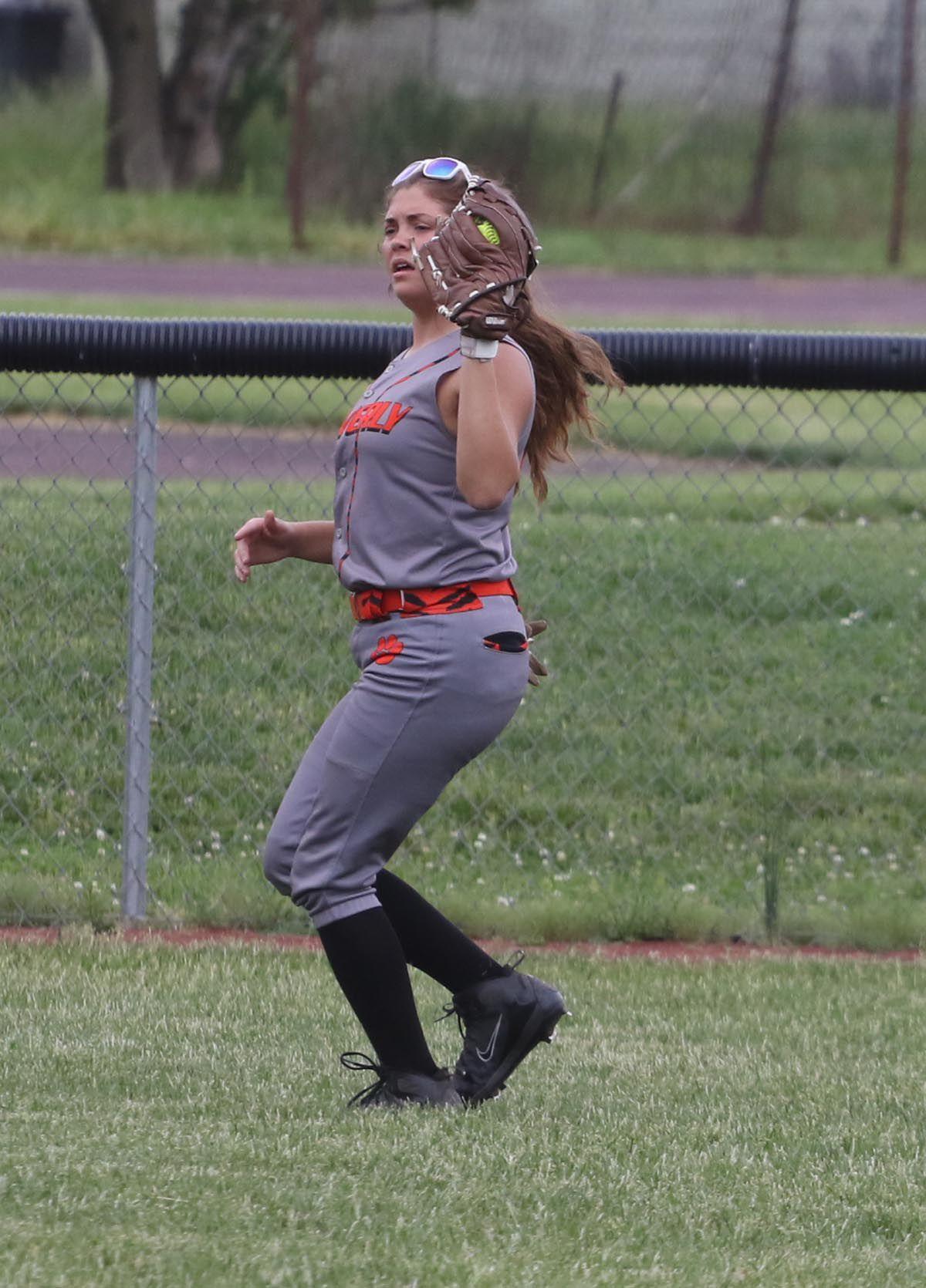 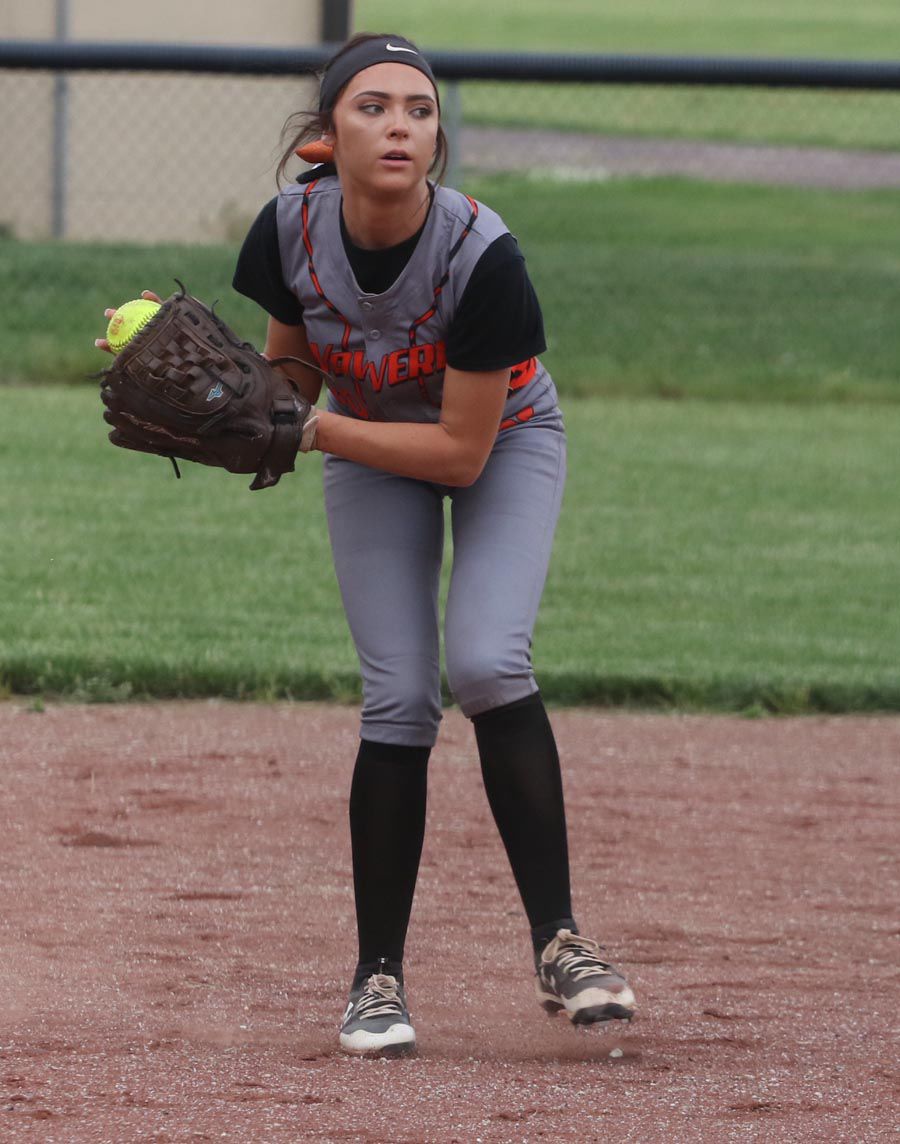 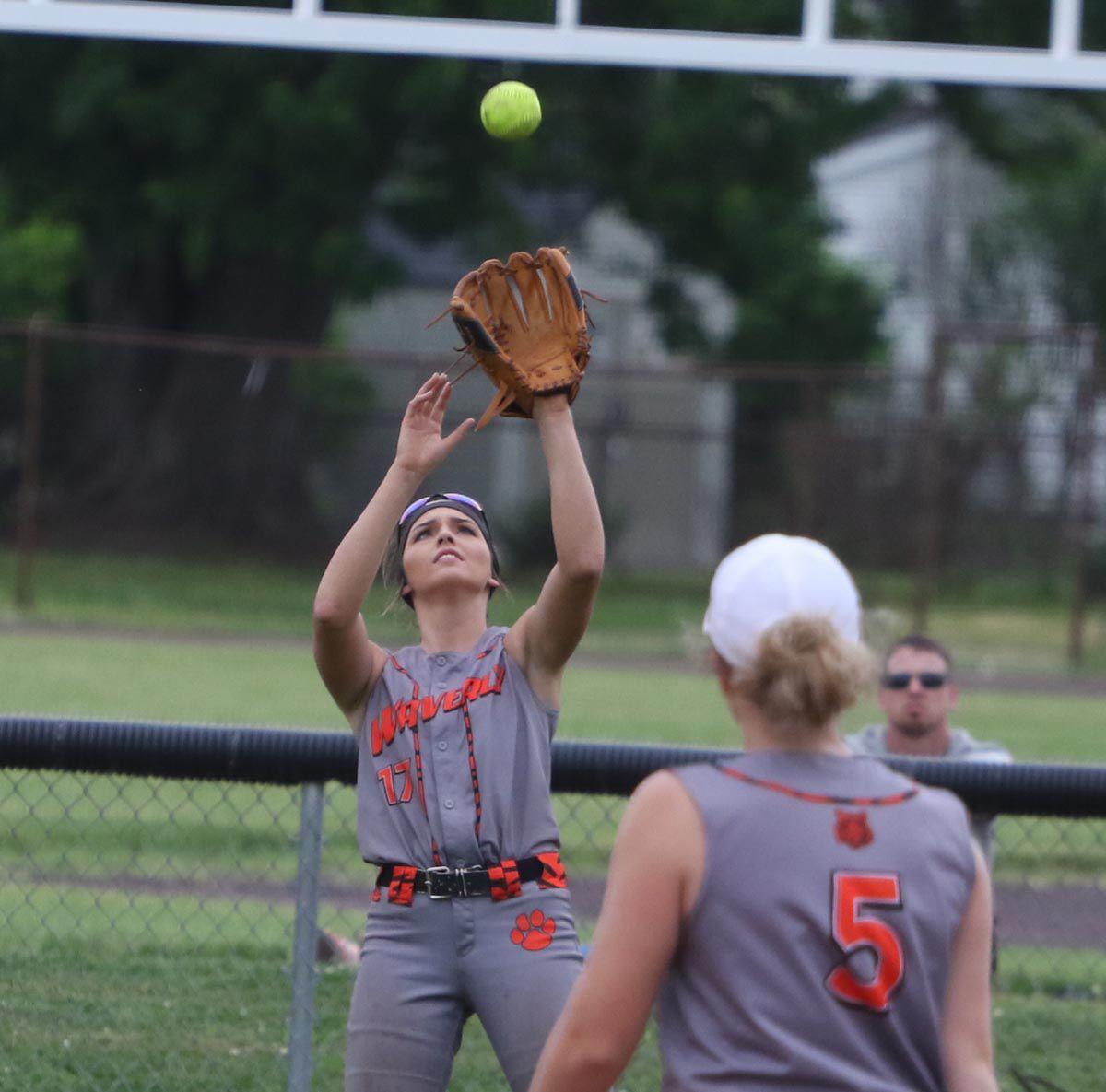 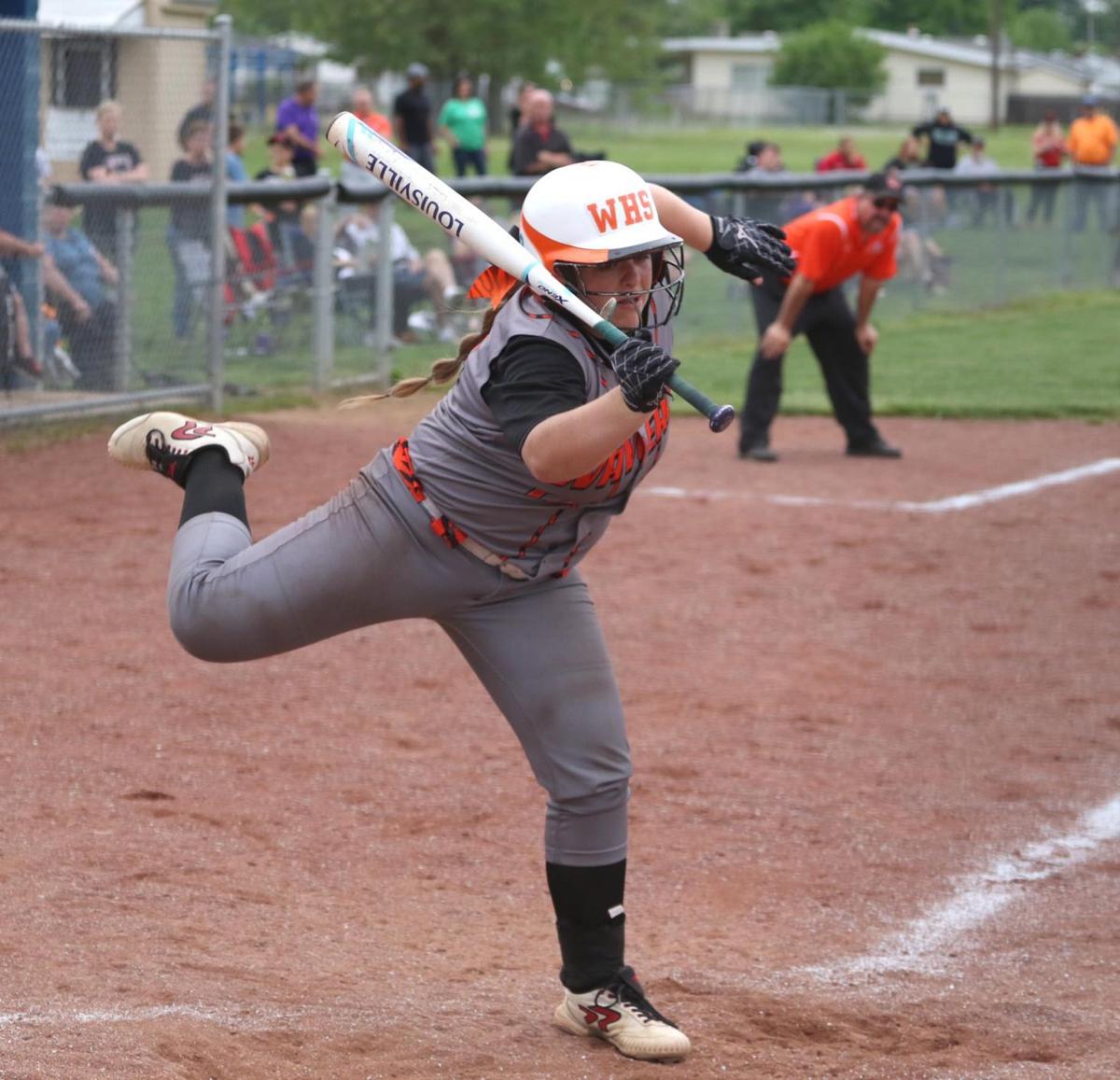 It took two evenings of playing on two different fields for the Waverly Lady Tigers to secure their 7-1 district semifinal victory over Circleville.

The Lady Tigers of Waverly and Circleville stepped onto Ohio University’s softball field Tuesday evening for their district semifinal softball battle under dark and ominous skies. Just four batters into Waverly’s lineup, a clap of thunder came, bringing the game to a halt. Players and fans were told to go to their vehicles or into the adjacent Convocation Center (basketball arena) until the weather cleared. But it did not clear, eventually postponing the game until the next day.

Originally, the two teams were told they would be returning to Athens Wednesday evening to resume play at 5 p.m. The tournament officials found a closer field for both teams to continue by moving the game to the Chillicothe High School complex at Mt. Logan School.

In Wednesday’s restart, the teams played through two scoreless innings before Waverly senior Kalicia Doles provided the lift that her team needed in the top of the third inning. At the plate with two outs, Doles was down to her final strike when she connected with a pitch from Circleville’s Sydney Wickline and lofted it deep into left field. The ball came down on top of the left field fence and bounced over for a solo home run, giving Waverly a 1-0 lead.

That shot allowed the Waverly Lady Tigers to breathe a collective sigh of relief. The homer also served as fuel for the fire. Hannah Robinson stepped to the plate next, delivering a hard grounder down the third base line for a single. She moved to second on a wild pitch before coming around to score on a base hit to right field from her sister Hailey. Seeing an opportunity, Hailey continued to second base when the ball got past the Circleville right fielder. Then catcher Kirsten Blair provided an RBI hit up the middle to send Hailey home and make the lead 3-0. The inning came to a close on a pop-up to the pitcher.

“In these games, it is important to score first when the pressure is on and the kids are tight. Kalicia’s home run made it 1-0. But then we made it 4-0 with two outs. That came from the timely hitting that we had,” said Waverly coach Scott Hayes.

Circleville threatened in the bottom of the third after shortstop Sarah Moats came up with a two-out double to right center field and stole third. The next batter, Abby Keaton, drew a walk before pitcher Hailey Robinson came back with a strikeout to get out of the jam.

The Lady Tigers added to their lead in the top of the fourth after Morgan Jones came up with a one-out single and scored on a triple from Zoiee Smith. After Jones produced her hit, she stole second to move into scoring position. A strikeout created the second out, but the Lady Tigers didn’t waste their opportunity to add to the lead. Smith stepped to the plate and delivered a line drive triple to right field. Smith very nearly legged out an in-the-park home run, but was caught in a rundown and eventually became the third out. But Jones had scored, making the lead 4-0.

Then Abby Keaton delivered a double to left field, plating Mullins to make the score 4-1. At that point, Waverly coach Scott Hayes decided to make a pitching switch, bringing Hannah Robinson into the game to relieve her sister Hailey. The next player grounded out, ending the threat.

Waverly’s lead remained 4-1 until the top of the seventh, when WHS tacked on three additional runs, in an effort to make sure Circleville couldn’t come back. Circleville had made a pitching change before Waverly batted in that final inning, but it didn’t slow WHS.

Starting the Waverly offense, Zoiee Smith led off with a line drive to right field. Then Doles followed with a single to left field, giving the speedy Smith plenty of time to score, 5-1. Hannah Robinson stepped to the plate and drew a walk. Then Hailey Robinson followed with a sacrifice bunt to move Doles and her sister, Hannah, into scoring position. Blair delivered the next RBI hit, sending Doles home to make it 6-1. Jessa Evans provided the final RBI, pushing Hannah Robinson home with a groundout to second, 7-1. A fly ball to deep left center field by Kenzie Penrod brought the inning to an end.

Defensively, the Waverly Lady Tigers closed out the victory with a 1-2-3 in the bottom of the seventh inning.

“We switched up the infield and the defense was great. Shaylee (Heistad) made a huge play at third, when they had runners on second and third in the fifth, which could have made it a tight game. Morgan (Jones) made a gigantic play at shortstop,” said Hayes.

“We told the girls all week that we felt outfield play was going to be tremendous and was going to be the difference in the game. I am not knocking Circleville. Our outfield made plays, while a lot of our runs were scored when we got extra bases on hits that should have been singles.”

All season long, Hayes has been preparing his team for this atmosphere.

“We want to get to the mindset that we are supposed to win the sectional tournament and then go win the district,” said Hayes. “The girls are starting to believe that they are good enough and they are starting to play with confidence at the right time. That’s why we played the schedule we had. We went through some bumps and bruises to prepare for this.”

Statistically, Waverly outhit Circleville 13-4. Doles finished 3-for-4 from the plate with a homer and two RBIs. The home run was her first of the season.

“It was a great time to have it (the home run). I was trying this whole season to hit one because it was my senior season. I wasn’t really trying that time and it happened,” said Doles.

“It was a huge lift. That Circleville pitcher was slower than what we were used to seeing. We were early on it. I just waited on the pitch and kept telling them (my teammates) to wait on it. I’m very proud of my team. Our defense has been super strong behind our pitchers, which is a great feeling.”

Blair was also 3-for-4 and produced two RBIs.

“The first Circleville pitcher was kind of slow, so we had to scoot up in the box and try to wait on the ball. She kept throwing curveballs,” said Blair. “Then when the second pitcher came in, she was more of our speed, so it clicked for us. We did really well.”

Hannah Robinson finished 2-for-3 from the plate with a pair of runs, while Hailey Robinson was 2-for-3 with an RBI. Hailey pitched five innings to earn the win, giving up one earned run on four hits, while striking out five and walking two. Hannah Robinson closed the final two innings to get the save, recording three strikeouts and a walk.

The Robinson twin sisters talked about what it means to them to be able to bring a different style to the pitching circle to help their team succeed.

“I think we are a good duo. We are opposites, so we do good together,” said Hailey.

Hailey said, “I feel good having my sister, Hannah, come in and relieve for me. I know she will do good and I hope she expects the same of me.”

“Hailey is my sister, so I always have confidence in her,” followed Hannah. “I always try to boost her up.”

“We’re always competing,” said Hailey. “We always want to see who has more strikeouts because we are competitive. If I throw a bad pitch, she’s always like, ‘Okay Hannah, next pitch,’ and I will do the same for her. It really gives us a boost. I think our hitting has helped us out a lot this year, especially come tournament time.”

“It gives us confidence when Kalicia gets a hit. Once she hits, then I think, I can do this and I am going to hit her in,” said Hannah. “That home run of hers was the first (run) of the game, so we knew we were going to get more runs and keep adding.”

The 7-1 victory meant that the Lady Tigers had to make a return trip to Athens Thursday evening in the quest for their district championship and a meeting with New Lexington, which had defeated top-seeded Jackson 3-0 on Tuesday to set up the district title meeting.