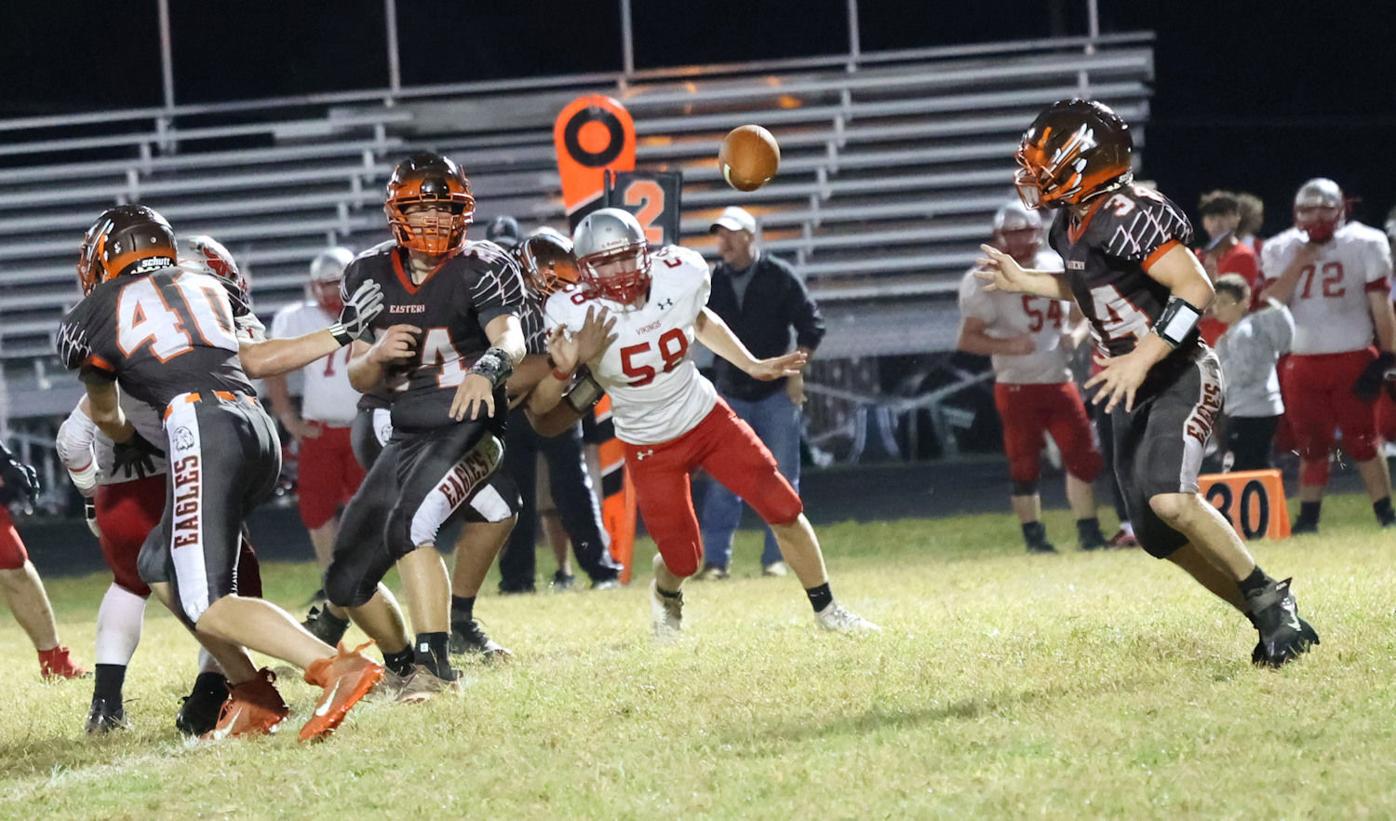 Eastern quarterback Dylan Morton pitches the ball out to freshman running back Brady Moore for a play that went for positive gain. Moore was the leading rusher for the Eagles with 11 carries for 76 yards. He also had an interception on defense. 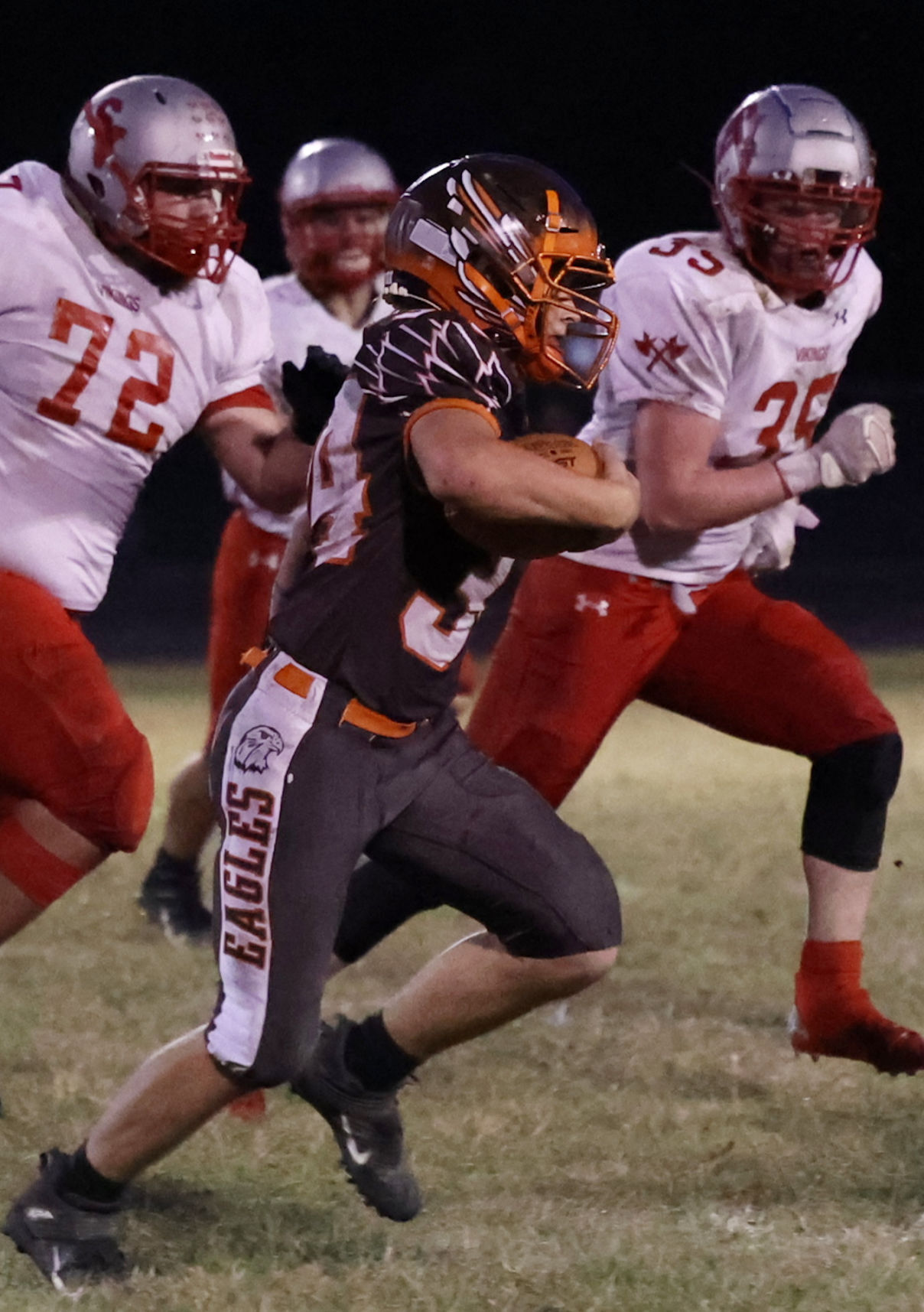 Brady Moore uses his speed and blocking from teammates to get the edge around the Symmes Valley defensive line. 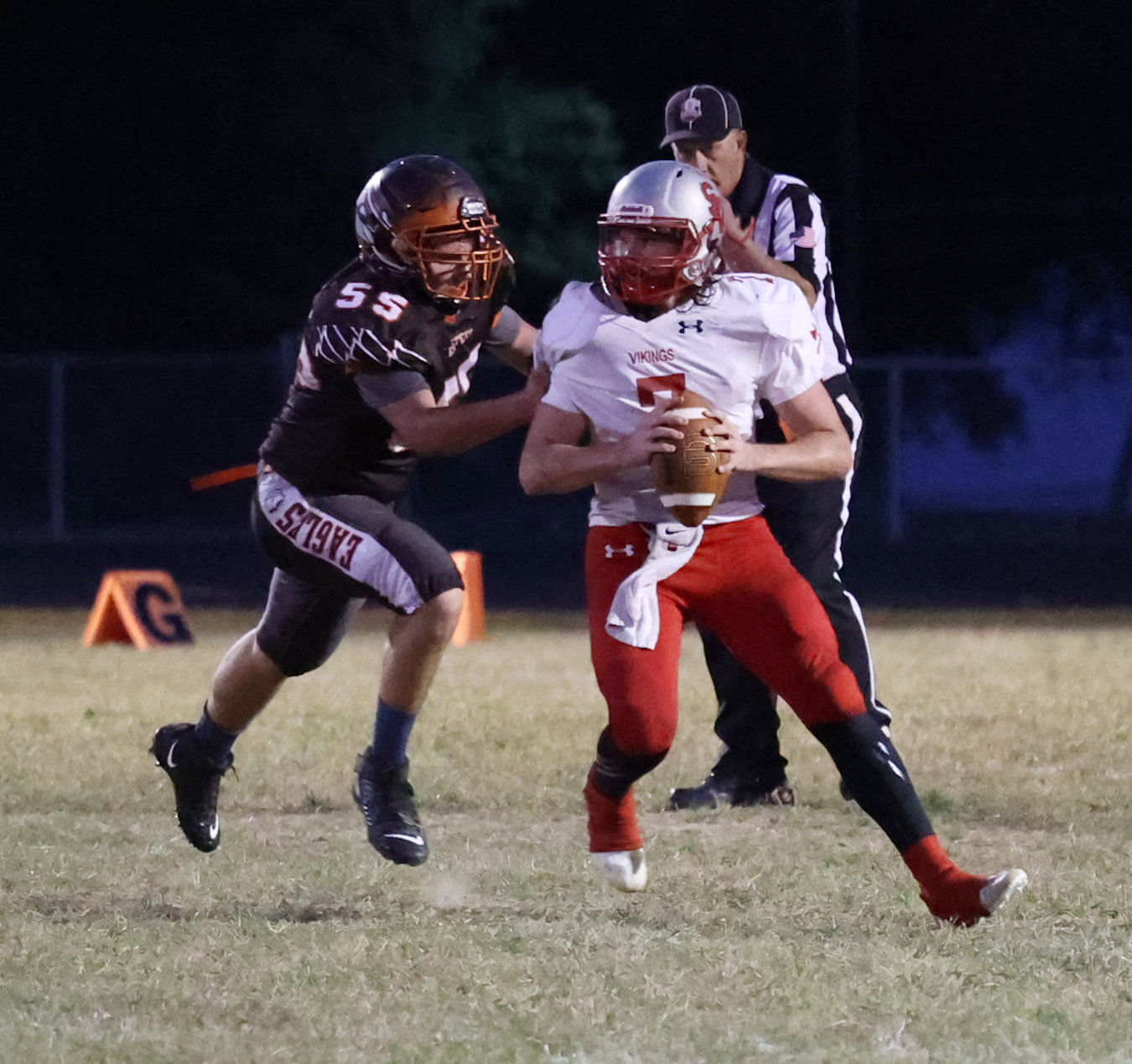 Eastern's Charlie Martin catches up to Symmes Valley quarterback Grayson Walsh in the backfield for a sack with a loss of 10 yards. 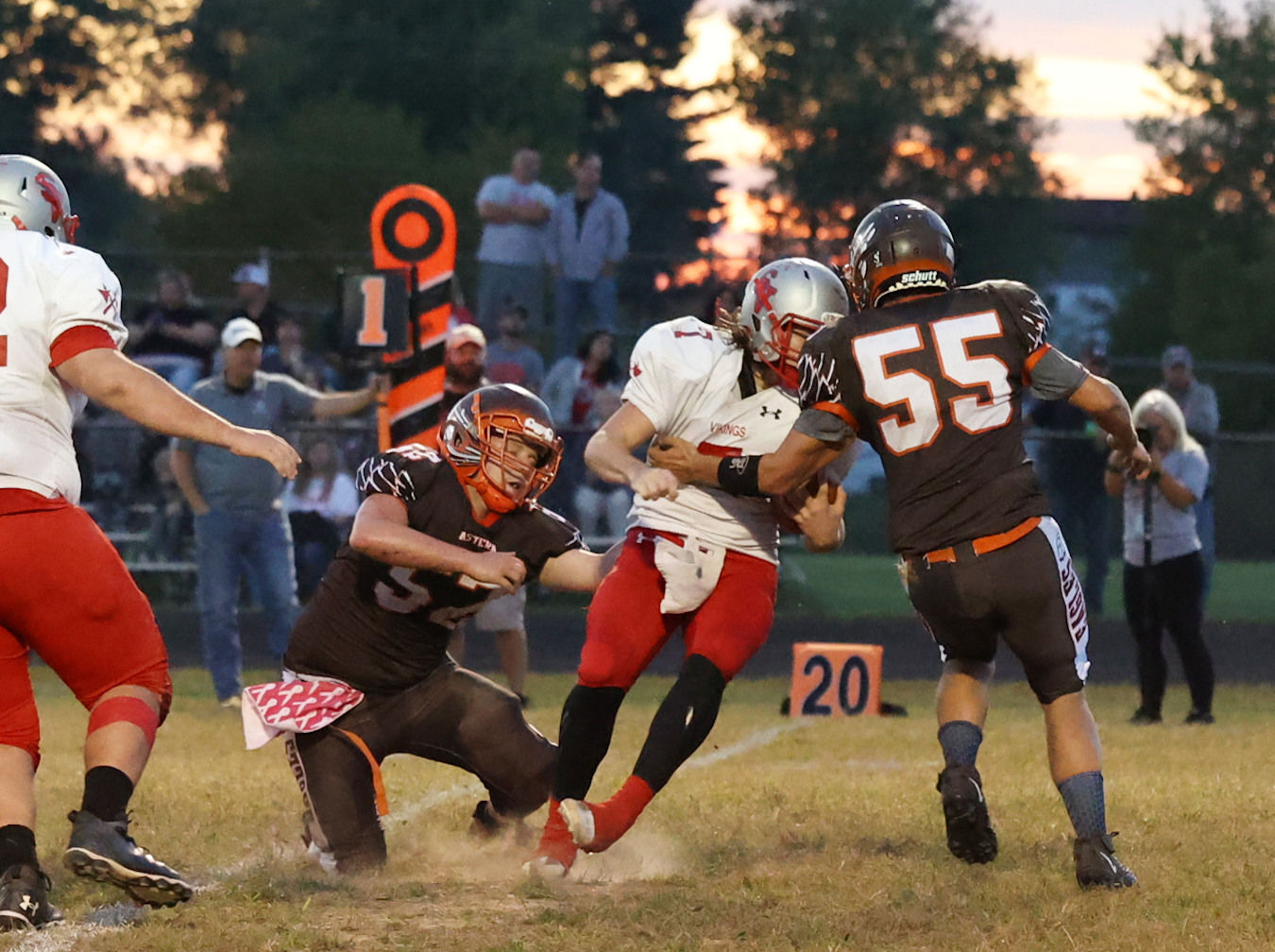 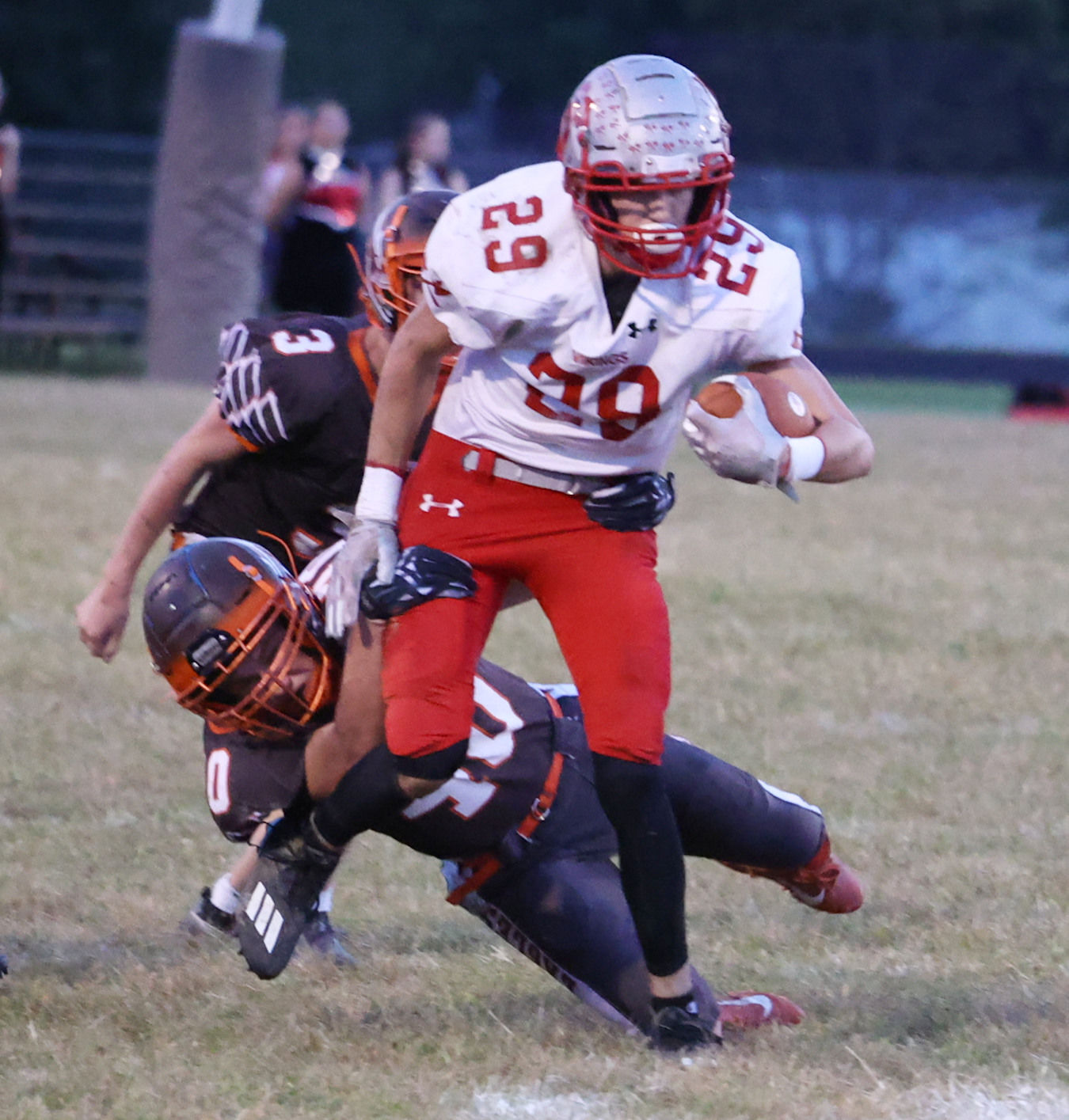 Eastern quarterback Dylan Morton pitches the ball out to freshman running back Brady Moore for a play that went for positive gain. Moore was the leading rusher for the Eagles with 11 carries for 76 yards. He also had an interception on defense.

Brady Moore uses his speed and blocking from teammates to get the edge around the Symmes Valley defensive line.

Eastern's Charlie Martin catches up to Symmes Valley quarterback Grayson Walsh in the backfield for a sack with a loss of 10 yards.

Although the scoreboard read 34-0 in favor of the visiting Symmes Valley Vikings in Thursday night’s football game at Eastern High School, there were some positives for the young Eagles to build upon in the future.

Prior to the game, a moment of silence was held in memory of Cheryl Davis, a fifth grade teacher at Eastern who passed away earlier in the week. The game was moved to Thursday evening, so the school would be available Friday for the viewing. It was held in the Eastern High School gymnasium from 5 to 8 p.m. Friday evening, followed by the funeral Saturday morning at 11 a.m.

On the field, the young Eagles had a hard time slowing the running surge of the visiting Symmes Valley Vikings.

Symmes Valley racked up 297 rushing yards and 5 touchdowns on 30 carries. Viking senior quarterback Grayson Walsh kept the ball himself 13 times and rushed for 155 yards and a touchdown. His longest run of the night was a 46-yard sprint, only to have Eastern freshman Brady Moore track him down from behind for a touchdown-saving tackle.

Two other rushers had big nights. Senior Ethan Patterson had 11 carries for 80 yards and 3 touchdowns, while senior Levi Niece finished with 6 totes for 62 yards and a touchdown.

The passing game was nearly non-existent for the Vikings. Walsh completed 1-of-5 passes for a gain of 2 yards. Walsh also threw an interception, as Eastern freshman Brady Moore made his mark there, too, snatching it at the Eastern 10-yard line and returning it 17 yards.

Offensively, Moore was the leading rusher with 11 carries for 76 yards. The Eagles finished with 93 rush yards in all.

“I feel like there’s a couple kids each week who are playing a little better. I feel like tonight our freshman Brady Moore ran a ball hard and had some nice plays on defense. So I think he’s finally had a light bulb moment,” said Eastern coach Scott Tomlison.

“Each week it’s like we find one kid where the light bulb came on for him. We just haven’t turned on the all light bulbs yet. Last last week, it was Landon Reinsmith, a sophomore linebacker. He went inside and played great. He played good again tonight. We’re starting a bunch of freshmen and sophomores right now.”

The Eagles saw their first two drives end in punts and the third via an interception, allowing the Vikings to go up 13-0. After that interception by Viking Eli Patterson, the Eastern defense stepped up to force Symmes Valley to go three-and-out, thanks to a first-down sack by Eagle junior Charlie Martin. The sack left the Vikings facing 2nd-and-19. After a short run and an incomplete pass, the Eagles regained possession on the Symmes Valley punt.

Inspired, Eastern responded with two big plays. Quarterback Dylan Morton started with a 15-yard completion to Ryan Zaler. Then Brady Moore broke a 13-yard run. Moore followed with rushes of 3, 1 and 4 yards, making it 4th-and-2. Moore took the handoff again, but was stopped short of a first down, allowing the Vikings to take over on their own 38-yard line.

The Vikings responded with their next scoring drive to increase the lead to 20-0 with 2:44 left in the half.

Eastern made gains once again on the ensuing drive, starting in good position after senior Devon Conley returned a kickoff 17 yards out to the Eastern 33-yard line. Morton looked Conley’s way again for the first pass of the drive, gaining 12 yards. On second down, Morton connected with Jace White for 28-yards, getting to the Viking 27-yard line. After a pair of incompletions, Patterson intercepted Morton’s pass, and returned it 63 yards. However, Patterson’s very first pass was intercepted by Moore to get the ball back for the Eagles.

Eastern ultimately ended up punting with 13 seconds left in the opening half. Symmes Valley ran just one play to get the ball to midfield before time expired.

In the second half, the Vikings started by using two big plays to get on the scoreboard with a 23-yard run from Patterson, extending the lead to 27-0.

Eastern followed with another positive drive, thanks to Moore starting it with a 26-yard kickoff return. The Eagles made it into Symmes Valley territory, but a fourth-down pass to Zaler was short of the first down marker. The Vikings used up the rest of the third quarter on a sustained drive, scoring their final touchdown of the night on a 15-yard run from Walsh, 34-0.

Eastern’s next drive ended in a fumble, but the Eagles kept the Vikings from adding any more points defensively, recording a 4th-down stop with a tackle for loss. They ran two final plays before time expired.

Quarterback Dylan Morton had 9 runs for 12 yards, while Jace White added 3 for 5 yards. Morton completed 6-of-14 passes for 62 yards and had a pair of interceptions.

“This week we put a big emphasis on Dylan Morton not standing in the pocket like a statue. For two days this past week, we did a lot of scramble drills with him moving around the pocket,” said Tomlison. “Tonight on three or four occasions, he tucked it and ran. Dylan got a little bit better at some reads that we wanted him to make.”

White had the largest gain in the passing game, securing a reception for 28 yards. Ryan Zaler secured 3 catches for 27 yards. Devon Conley caught 1 for 12. Moore also caught 1 for a loss of 5 yards.

“I’m still disappointed in the running game. We haven’t had the same offensive line together since week one. We are grabbing some of our skill players and making them offensive linemen,” said Tomlison.

“Ryan Zaler, a junior who came in from the trade school, just joined the team four weeks ago, as did Braydon Barker who is starting on the defensive line in place of Jacob Johnson, who is out for the season with an injury. We have those two kids starting for us who don’t even know the playbook yet. That’s how many injuries we’ve had.”

Tomlison is hoping his Eagles can continue to build on the positives this week and continue to improve.

“I’m happy they competed tonight. They didn’t quit. We stopped them (Symmes Valley) on first and second down. Then on third and long, we gave up some plays where we were just undisciplined, not lined up right, or getting sucked inside,” said Tomlison.

“It is just the little things, but we are young. We have to keep working on their assignments and what to do. We have to take small victories tight now. I’ll go back and watch the film and be positive on the small things that we did right tonight.”

Up next, the Eagles will head to Scioto County Friday night to historic Spartan Stadium to square off with the Notre Dame Titans for a 7 p.m. kickoff.