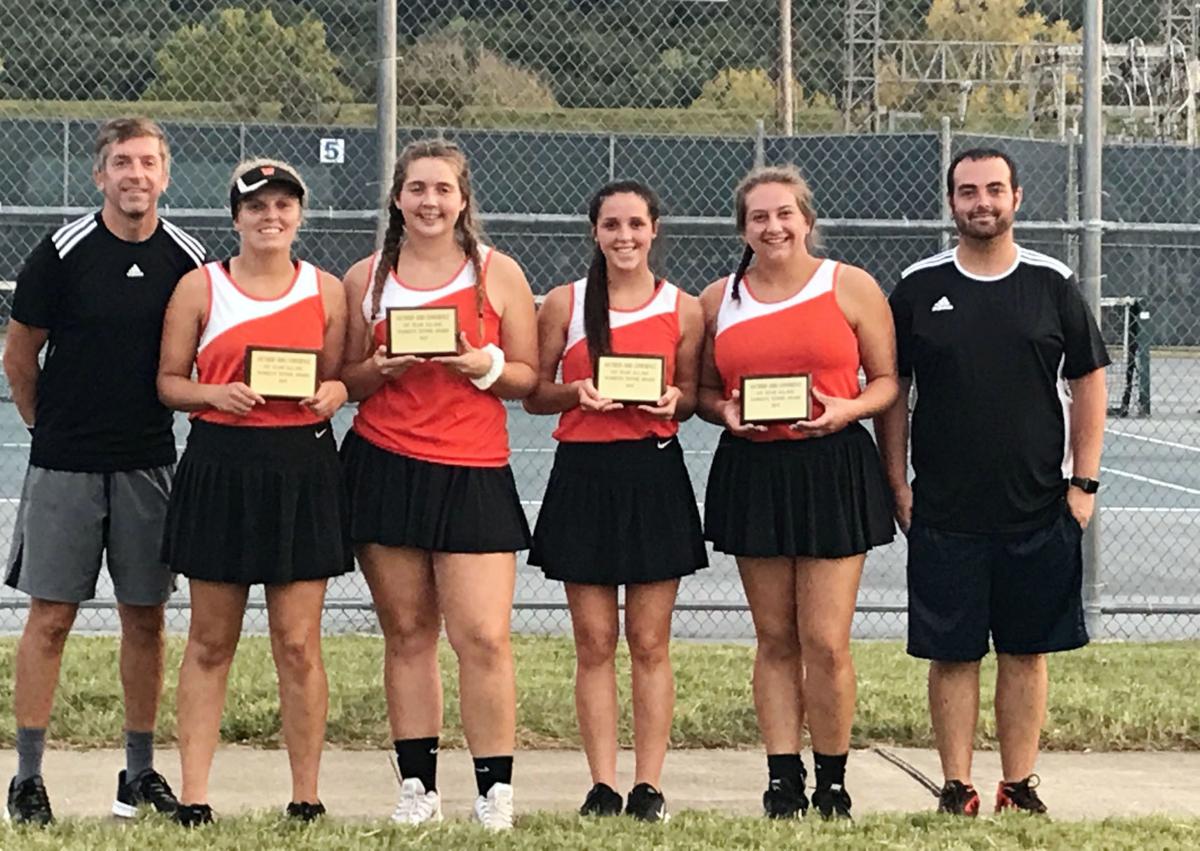 The Waverly Lady Tigers claimed four of the eight available spots on the All-Southern Ohio Conference tennis team with their performances in the league tournament. They stand here together as a group with their coaches. From left to right, they include Head Coach Matt Morrison, Kenzie Penrod, Kayla Barker, Hope Wilburn, Alli Entler, and Assistant Coach Trevor James. 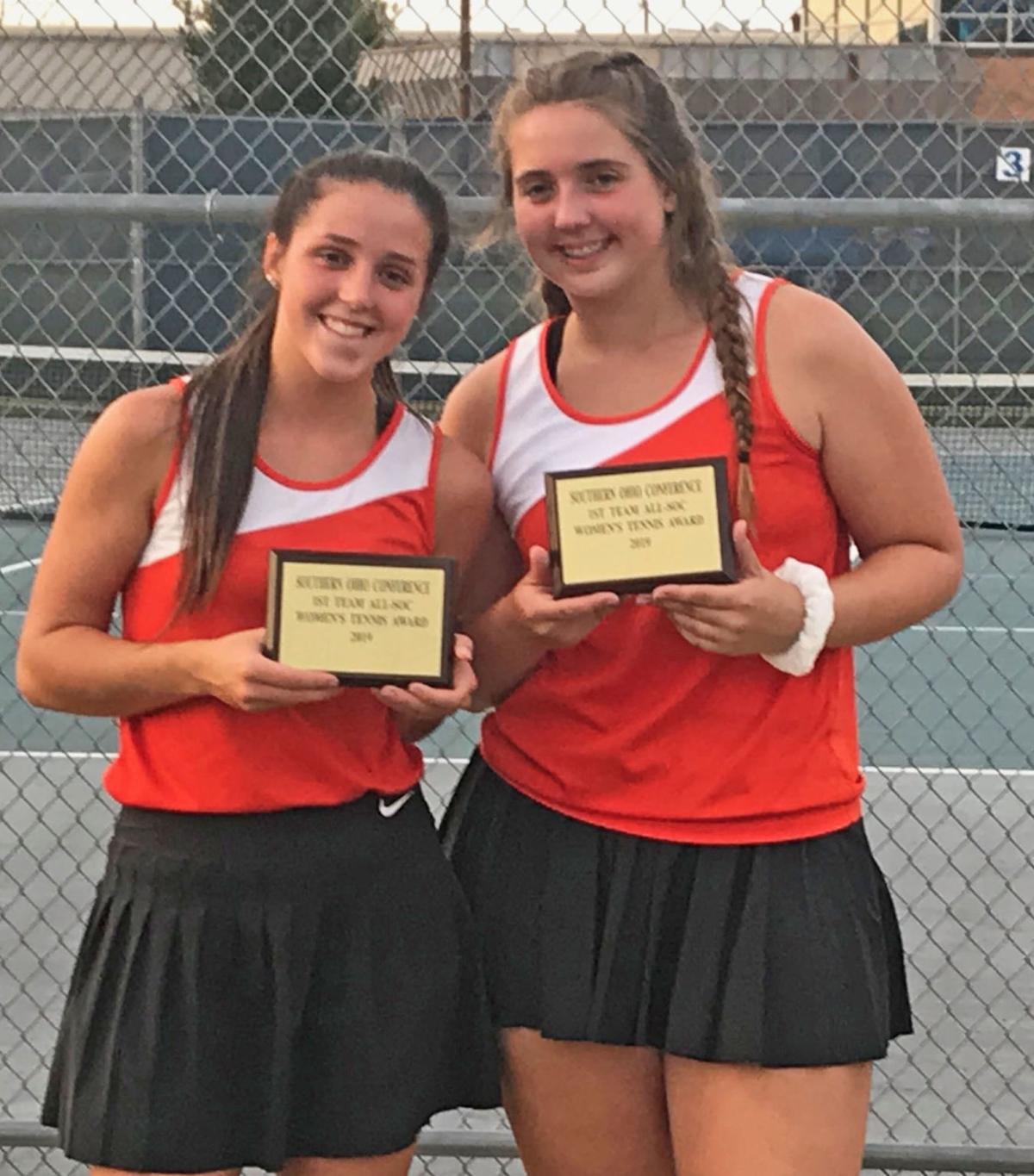 Hope Wilburn and Kayla Barker stand together, holding their plaques for securing All-SOC doubles honors after finishing as the runner-up duo in the league tournament. 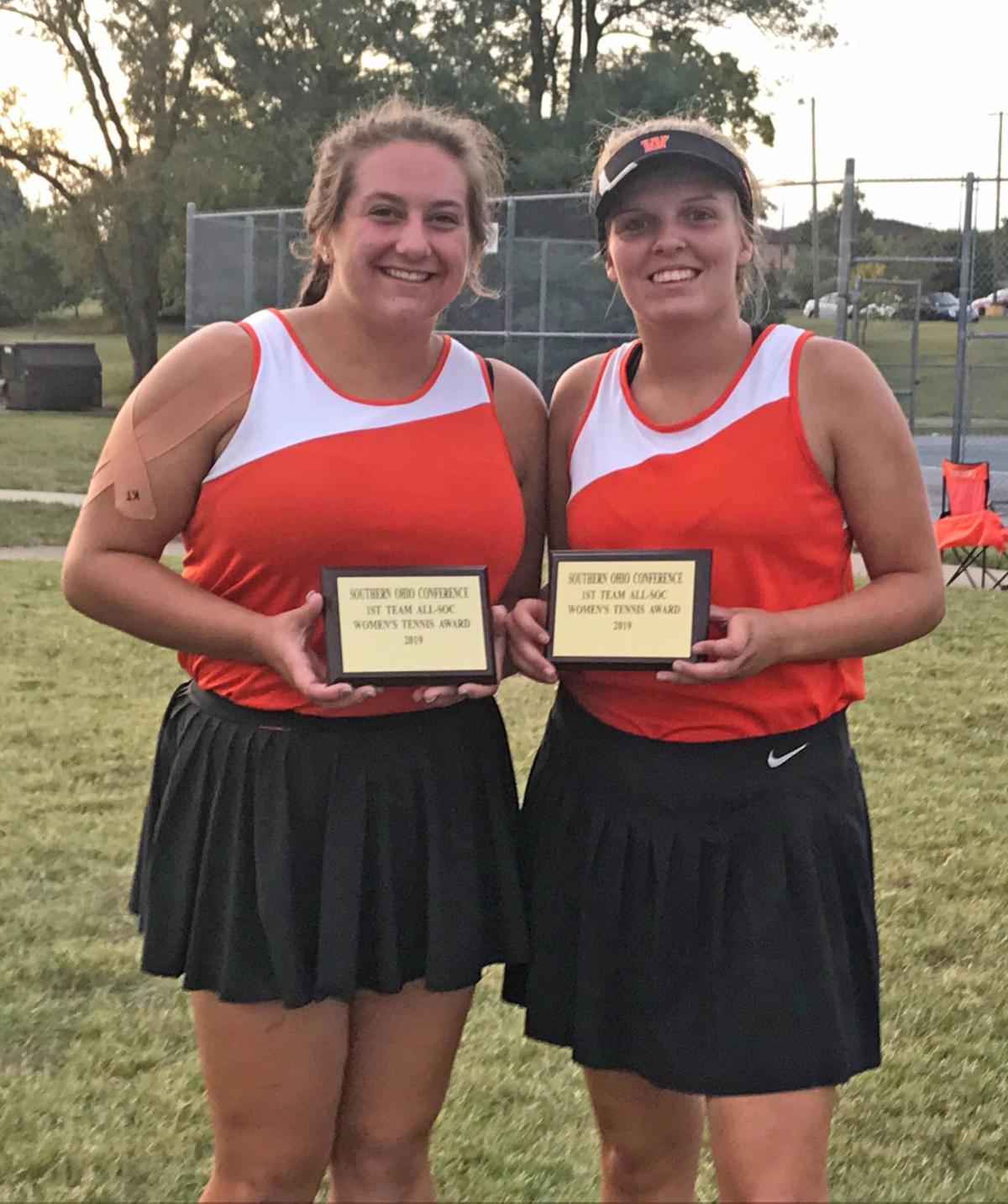 Waverly senior tennis players Alli Entler and Kenzie Penrod stand together and show off their hardware for being the top two singles players in the Southern Ohio Conference tournament.

The Waverly Lady Tigers claimed four of the eight available spots on the All-Southern Ohio Conference tennis team with their performances in the league tournament. They stand here together as a group with their coaches. From left to right, they include Head Coach Matt Morrison, Kenzie Penrod, Kayla Barker, Hope Wilburn, Alli Entler, and Assistant Coach Trevor James.

Hope Wilburn and Kayla Barker stand together, holding their plaques for securing All-SOC doubles honors after finishing as the runner-up duo in the league tournament.

Waverly senior tennis players Alli Entler and Kenzie Penrod stand together and show off their hardware for being the top two singles players in the Southern Ohio Conference tournament.

Looking back at a very successful tennis season that led to a Southern Ohio Conference title and all-league honors for four athletes, the Waverly Lady Tigers brought home plenty of hardware in 2019.

After the Lady Tigers played their way to an outright Southern Ohio Conference tennis team title with a final league record of 7-1, the Lady Tigers began the play for individual awards in the SOC tennis tournament. That competition was played on Tuesday, Sept. 24, Wednesday, Sept. 25, and Thursday, Sept. 26 in Portsmouth.

Waverly senior Alli Entler secured the No. 1 seed in the singles bracket and received a first-round bye. She began the first day of the two-day tournament by defeating a Wheelerburg player 6-0, 2-0. The second set was shortened because’s Entler’s opponent had to retire from the match with an ankle sprain. By getting through that match, Entler guaranteed that she would qualify for All-SOC honors. That put her in the semifinals against the No. 3 singles player from Wheelersburg.

On that first day, Waverly senior Kayleah Shiland also won her first match over a Wheelersburg girl 6-0, 6-2. She advanced to the quarterfinal match with Notre Dame’s No. 1 singles player. Shiland lost her first set 0-6 before play was suspended due to darkness.

Waverly senior Kenzie Penrod won her first match against Valley’s No. 2 singles player 6-0, 6-2 and advanced to her quarterfinal match with Minford’s No. 1 singles player. Penrod won the first set 6-4, before darkness suspended the match. To get to that win, Penrod fell behind 1-4 and won five straight games to pull out the set.

In doubles, Kayla Barker and Hope Wilburn won their first match 6-2, 6-2, versus Valley’s No. 1 doubles team on the opening day. They were awaiting the winner of Wheelersburg’s No. 1 team and Notre Dame’s No. 1 team in semifinals.

Kaylin Smith and Sophie Thomas lost their first round match to Notre Dame’s No. 2 team.

Returning to action for the second day on Wednesday, Sept. 25, Wilburn and Barker knocked out Wheelersburg’s regular No. 1 doubles team 6-4, 6-3. That set them up to return again on Thursday to play for the SOC doubles tournament title.

“They play versus Wheelersburg’s normal No. 1 and No. 2 singles players paired up as a doubles team,” said Morrison. “But since they made the final, they qualified for the all SOC team which goes to eight players from the league — the four doubles players (two teams) who advance to the doubles final and the four singles players who make the semifinals.”

In singles action on the second day, Kenzie Penrod finished off Minford’s No. 1 in the quarterfinal 6-4, 6-3. Then she had to play Notre Dame’s No. 1 singles player and the tournament No. 2 seed in the semifinals.

“Kenzie played a very focused match and won 6-1, 6-4,” said Morrison. “She did a good job holding off Notre Dame in the second set.”

Entler, the top seed, defeated a Wheelersburg player in the quarterfinal. Then she defeated Wheelersburg’s No. 3 singles player 6-2, 6-0 to advance to final.

“So Kenzie and Alli play tomorrow for the title, which is a pretty sweet ending for us,” said Morrison. “It should be fun. That gave us four members of the All-SOC team. Wheelersburg got three and Notre Dame had one.”

With all of the finalists returning to Portsmouth Thursday to conclude the tournament, Wilburn and Barker lost the doubles final. In the singles final, Entler was leading Penrod 6-3, 5-1 and hurt her ankle during match point.

“Alli couldn’t continue, so they’ve agreed to finish at later time. The bigger issue now is sectionals on Tuesday, and will she be able to play? She’s the No. 3 seed in the sectional tournament.”

On Tuesday, Oct. 2 and Wednesday, Oct. 3, the Lady Tigers traveled back to Portsmouth to compete in the sectional tournament.

Kayleah Shiland didn’t go to the tournament, so Desi Swepston took that spot. Swepston suffered 0-6, 1-6 loss in the opening round.

“The end of the season didn’t go like we hoped, but we accomplished our team goal of winning the SOC and had four girls qualify for all-SOC team,” said Morrison. “We showed a lot of fight in many matches. We had a lot of balls bounce our way, and then after SOC tournament, things went south.

“I hate it for Alli to have to watch from the sideline and not be able to make districts for the third straight year. That was a terrible ending to a good run that she’s had for four years.

“All of these seniors will be missed for sure,” said Morrison. “I’ll never forget this team and the run we made and the performances when our backs were against the wall. I’m proud of them, and it was a season to remember!”

Waverly ended the year with an overall record of 11-2.