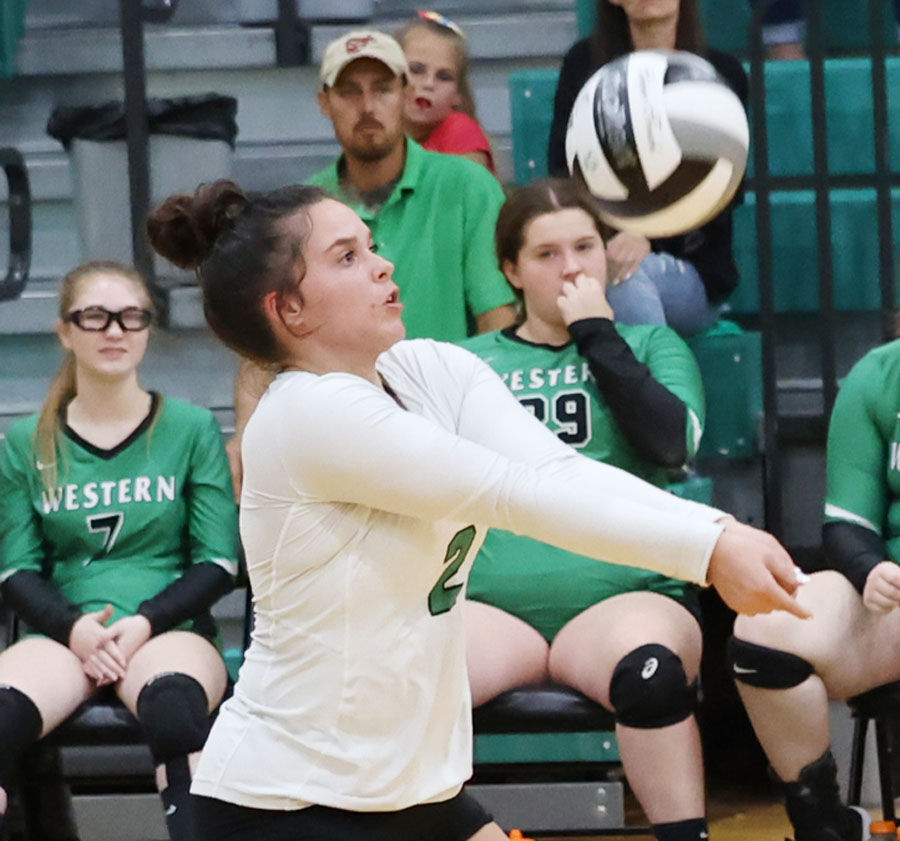 Western senior libero Abbi Grooms makes a dig in the Wednesday, Oct. 6 match versus Lynchburg-Clay. She had 14 digs in the win. 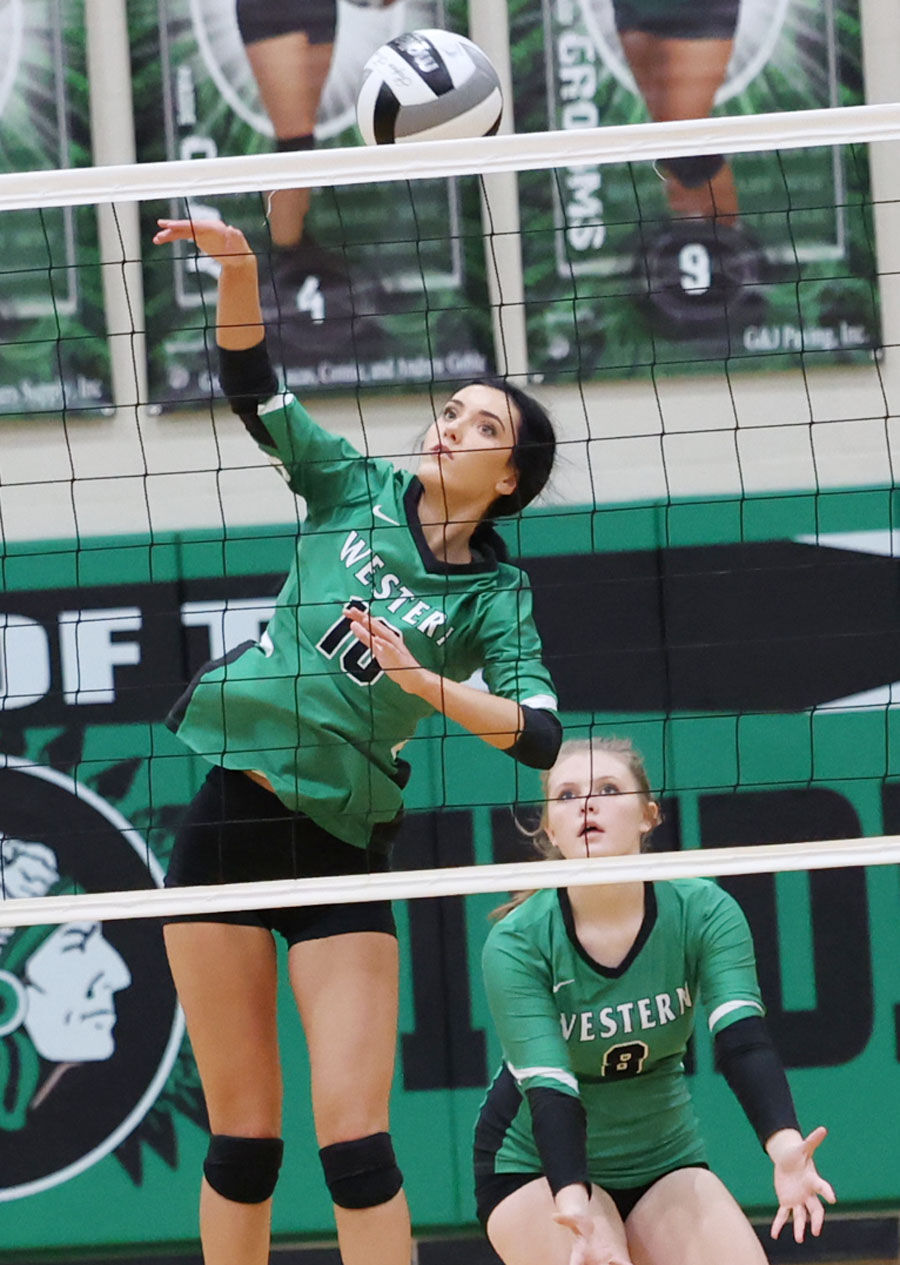 With Alyssa Marhoover backing up the play in case of a quick return, Western senior Chloe Beekman goes for a kill in the Lynchburg-Clay match. Beekman finished the night with 8 kills.

Western senior libero Abbi Grooms makes a dig in the Wednesday, Oct. 6 match versus Lynchburg-Clay. She had 14 digs in the win.

With Alyssa Marhoover backing up the play in case of a quick return, Western senior Chloe Beekman goes for a kill in the Lynchburg-Clay match. Beekman finished the night with 8 kills.

In a volleyball season where wins have been hard to come by, the Western Lady Indians won three in a row this last week, taking triumphs over Green, Lynchburg-Clay and Sciotoville East.

Senior Chloe Beekman led the team in kills with 8 and added 11 digs. Senior Sakayla Beckett led in blocks with 3, having 5 kills and 2 digs as well.

Seniors Maddie Clay, Sakayla Beckett and Abbi Grooms had 1 kill each. Clay and Grooms also provided 4 digs each. Additionally, Grooms was 7-for-8 in serve receive.

Junior Kenzi Ferneau led the team in digs with 22, adding 6 kills and going 11-for-11 in serve receive. Freshman Kerrigan Marhoover served 15-for-15 with 2 aces, while providing 10 digs and 5 assists.

“This was our third win for the season. Culture is a big thing for our team. We’re trying to put in those standards and set that culture. It’s getting there,” said Western coach Dawn Durham.

“We have a huge senior group. We’re going to be young after this year. So we are putting into place the footwork, the fundamentals, culture and the standard for our team going forward. That is something the coaches and I have wanted to do from the get-go, and feel that is most important to build a successful program. Game-by-game and practice-by-practice, that’s what we are trying to do. The girls coming up are doing footwork and buying into the standard that we’re setting. We’re seeing great things.”

After winning the first set 25-15 over Lynchburg-Clay, the second set was much more challenging for the Lady Indians. After the two teams tied at 2-2, Kerrigan Marhoover served Western into a 4-2 lead with kills from Chloe Beekman finishing both points. The Lady Mustangs battled back to tie it at 5-5 and moved into a brief 7-5 lead.

A kill from Taylor Grooms gave the serve to Beekman, who fired across two more points with Sakayla Beckett adding a kill, to put Western in front 8-7. Once again, the Lady Mustangs took the serve and regained the lead, adding six straight points to go up 13-8.

Lynchburg-Clay pushed that advantage all the way up to 16-9 before Western began a comeback. Winning a point to get the serve back, Western senior libero Abbi Grooms fired five straight points, including three aces, to pull the Lady Indians back within one, 16-15.

The Lady Mustangs pushed their lead to three twice more before Kerrigan Marhoover served Western into a lead of 20-19. The teams tied at 21, 22, and 23 before Western was able to move it to set point on a Sakayla Beckett kill, 24-23. Kenzi Ferneau finished the win by sending the ball over the net on a well-placed set that no one could return, 25-23.

“We’ve had a lot of trouble finishing,” said Durham. “Tonight was 23-23 and our girls came back. So we finally finished.”

The third set began with the two teams battling through a series of ties at 1, 3, 4, 5, and 6. Then Western won the next point to make it 7-6 and gave the serve to Beekman, who delivered six straight to make the lead 13-6. Beckett added a block during that stretch to keep the run going.

A short sequence of trading points began before Western was able to extend the lead to 10, 20-10, on a pair of Kerrigan Marhoover serves. Lynchburg-Clay claimed just three more points before Western finished off the victory by winning a volley on the final point, 25-13.

Sakayla Beckett had 5 kills, 1 dig, and 1 assist. Taylor Grooms handed out 12 assists, while having 2 kills and 7 digs. Maddie Clay provided 1 kill and 1 assist. Megan Whitley had 10 digs and 1 assist.

Kenzi Ferneau had 28 digs to lead the team in that category. She also had 6 kills, 1 assist, and was 10-for-10 in serve receive.

“It has been a goal of mine since I’ve been in the gym. I couldn’t have done it without each and every one of my teammates and all of the coaches over the years,” said Ferneau of the 1,000 dig achievement. “Digging is a thrill. It gets my heart pumping when a hard hitter hits the ball at me, and I get to dig. It makes me feel accomplished.”