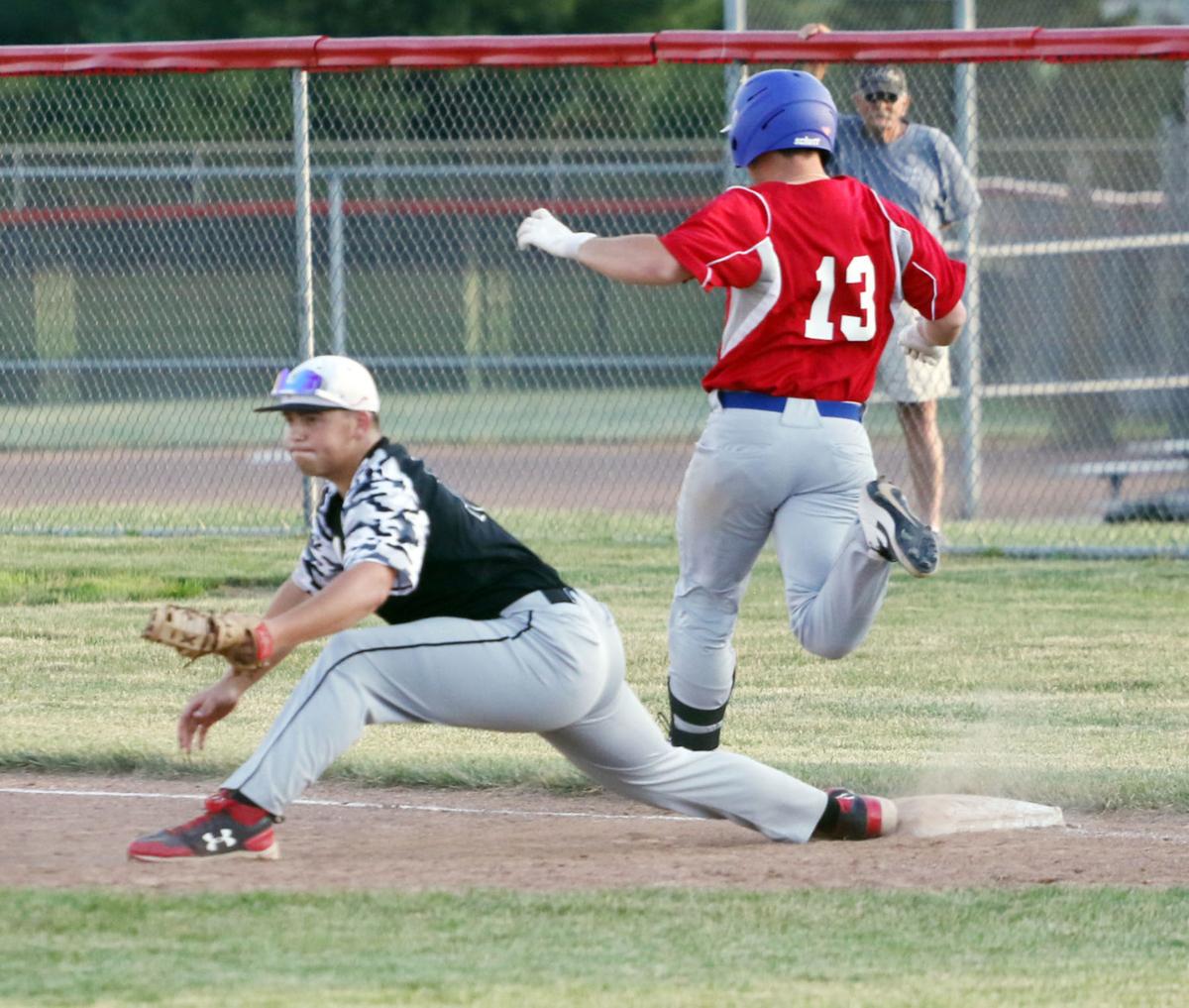 Post 142 first baseman Easton Lansing stretches out to secure the throw from shortstop Weston Roop, competing a 4-6-3 double play that began when second baseman Logan Maynard secured a grounder in the seventh inning of Tuesday’s home game at PHS. Post 142 came from behind to earn a 3-2 victory. 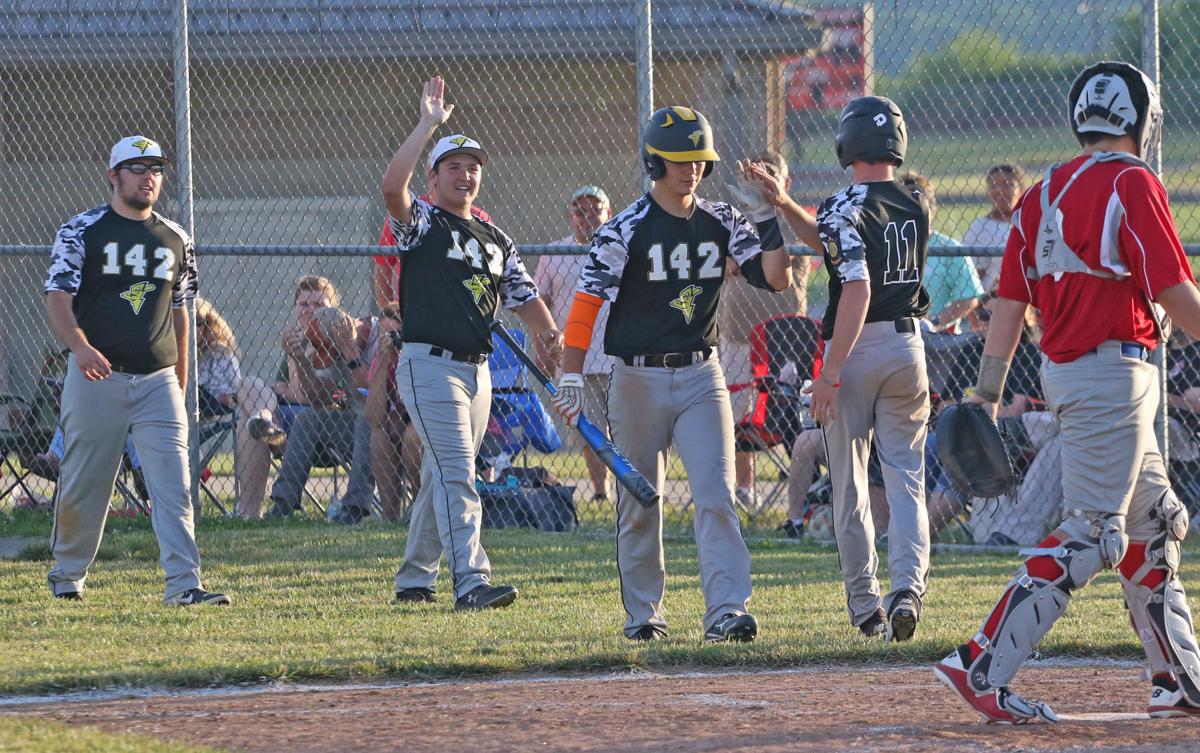 As the pinch runner for the go-ahead run in Tuesday’s game, Jacob Thornsberry gets a high-five from Weston Roop with teammates Ben Flanders and Derek Eblin following. 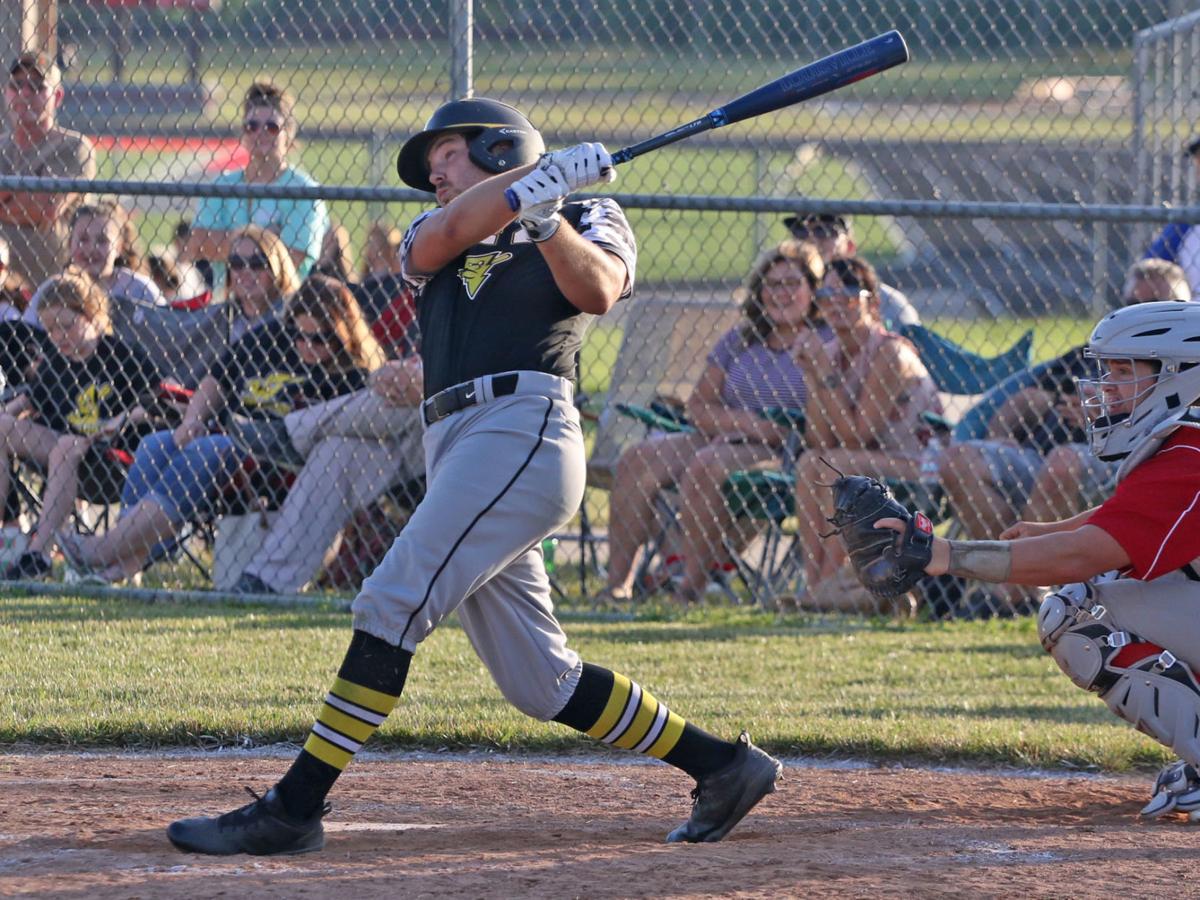 Kannon Pack connects on his second single of the night in Tuesday’s contest against Lancaster Post 11.

Post 142 first baseman Easton Lansing stretches out to secure the throw from shortstop Weston Roop, competing a 4-6-3 double play that began when second baseman Logan Maynard secured a grounder in the seventh inning of Tuesday’s home game at PHS. Post 142 came from behind to earn a 3-2 victory.

As the pinch runner for the go-ahead run in Tuesday’s game, Jacob Thornsberry gets a high-five from Weston Roop with teammates Ben Flanders and Derek Eblin following.

Kannon Pack connects on his second single of the night in Tuesday’s contest against Lancaster Post 11.

Sometimes all that matters is how the game ends.

For the Waverly Post 142 Senior Shockers, the momentum shifted in their favor late in the Tuesday’s home baseball contest at Piketon High School, resulting in a come-from-behind 3-2 victory over the visiting Lancaster Post 11 team.

“I’m very proud of our team,” said Waverly coach Jonathan Teeters. “We really weren’t playing well enough to win the game for the majority of the game, but we were able to pull it off.”

Lancaster took an early advantage, using a two-out rally combined with a Shocker error to tack on the first run in the top of the second inning. Then Post 11 doubled the lead with a leadoff single and an RBI-double to make it 2-0 in the third.

Offensively, the Shockers went down in order through the first three innings and appeared to be headed for the same trend in the bottom of the fourth. But Kannon Pack gave them some life by generating a two-out single — the first hit for the Shockers in the game. He was stranded at first, but the base hit gave the Shockers a confidence boost.

The bottom of the fifth inning saw the Shockers fill the bases and eventually push a run across to cut the deficit in half, 2-1. Lane Mettler led off with a single before Roger Woodruff reached base on an error. Easton Lansing was the next base runner when he drew a one-out walk to fill the bags. Michael Goodman hit into a fielder’s choice, resulting in a force play at home that saw Mettler out at the plate. With two outs, the opportunity score was not wasted, as leadoff batter Weston Roop was hit by a pitch. That pushed Woodruff across the dish before a strikeout ended the frame with Waverly trailing 2-1.

The Post 142 rally continued in the bottom of the sixth. Pack gave his team another lift by leading off with his second single of the game. A groundout from Derek Eblin pushed Pack to second. Then Lane Mettler hit a hard grounder to third and beat out the throw, sending Pack on to third. Jacob Thornsberry entered as a pinch runner for Mettler and eventually scored the go-ahead run.

Thornsberry quickly stole second base after a Waverly strikeout. That put runners at second and third with two outs. Post 11 opted to intentionally walk Ben Flanders, setting up a bases-loaded force play. But Easton Lansing followed by delivering a single, pushing Pack home to create a 2-2 tie. Michael Goodman was credited with having the game-winning RBI, as he followed by working a walk to push Thornsberry home, creating a 3-2 lead.

For Post 142, Derek Eblin entered as a relief pitcher in the top of the seventh, closing the door on a Lancaster comeback. He didn’t surrender a hit, striking out one batter and walking one. Defensively, the Post 142 infielders helped Eblin by turning a double-play to eliminate the only runner. Then Eblin finished the victory with a strikeout.

Reliever Levi Coriell was created with the win after throwing the fifth and sixth innings for Waverly. Coriell didn’t give up a hit either, striking out two and walking two. Mason Ratcliff started and worked the first four innings, giving up two earned runs on seven hits, while walking three.

Offensively, Kannon Pack and Lane Mettler each finished 2-for-3 from the plate with a run to lead the charge for the Shockers. Lansing was 1-for-2 with an RBI, while Roop and Goodman each picked up an RBI as well.

“Mason, Levi, and Derek all were sharp on the mound,” said Teeters. “All three made great adjustments from their previous outings.”

After the game, both Mason Ratcliff and Derek Eblin talked about how much it meant to them to get back on the baseball field after missing the 2020 high school baseball season when it was cancelled due to coronavirus concerns.

“I’m glad to be playing baseball again. It was a lot of fun to get back on the field. I enjoyed it, and had a lot of fun with my teammates,” said Ratcliff. “Never take anything for granted because you never know when you might get to do it again.”

“It is tough to get back into shape, especially when you can’t use the high school facilities because of them being shut down,” said Eblin. “It was hard to get a catcher, too, with all of the stuff going around and playing it safe. So we didn’t get to have as many bullpen sessions as we would have liked. We are getting back into it, so it is starting to feel good now.”

Both Ratcliff and Eblin were thrilled with the come-from-behind win.

“It was a great for the team,” said Ratcliff. “We kept the motiviation up the whole game.

Eblin added, “We kept the positivity thoughout, even when we were down 2-0. We just kept going and finished it out.”

With that victory, the Shockers improved to 3-1 overall and traveled to Hillsboro to compete against the Troy Bombers in a Friday afternoon opener for the Hillsboro wood bat tournament. The tournament will continue at Shaffer Park through the weekend.