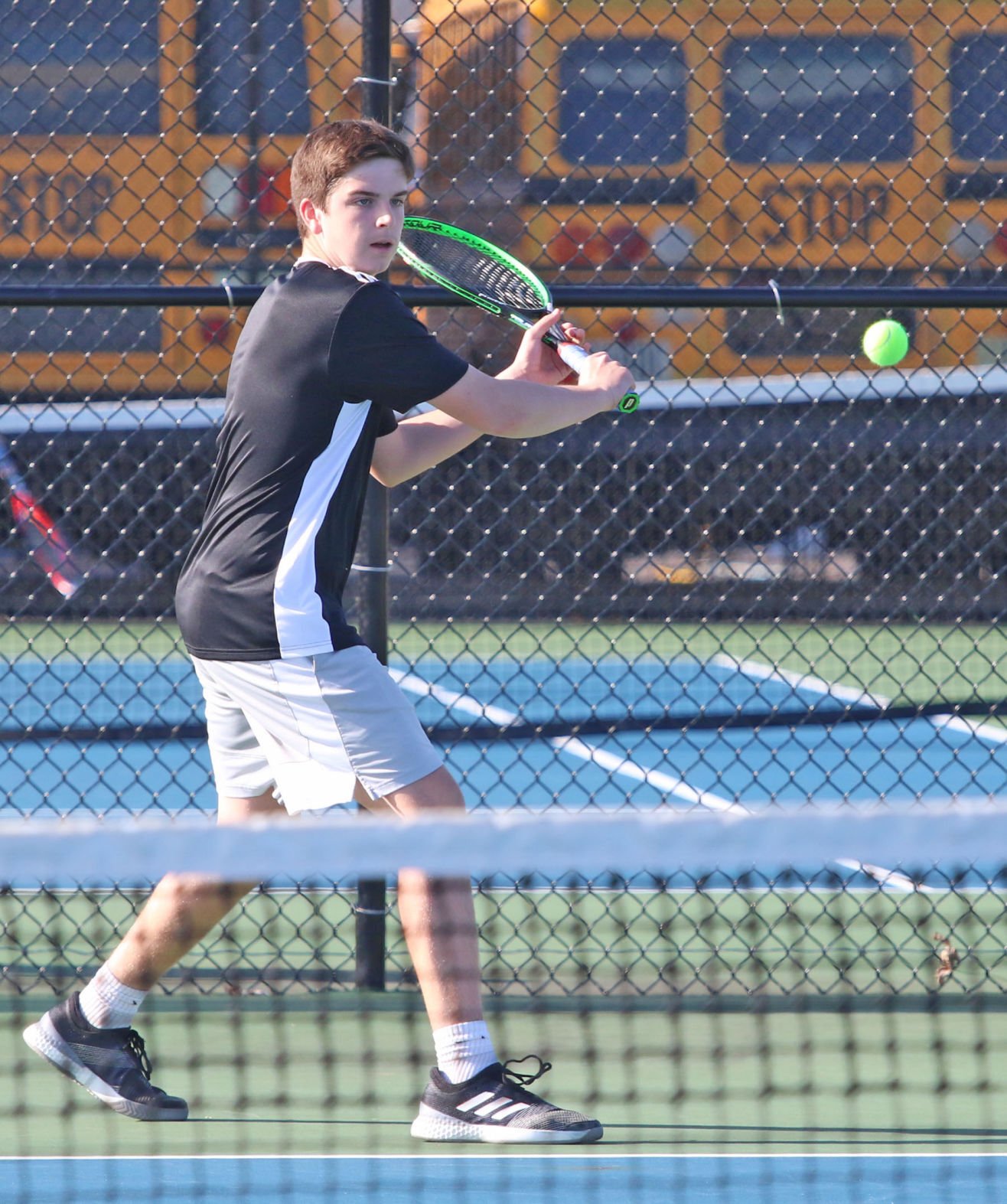 As a freshman tennis player at Waverly in the spring of 2019, Penn Morrison dominated the court, playing his way to the state tournament where he won a match and later learned he was named Second Team All-Ohio in Division II. 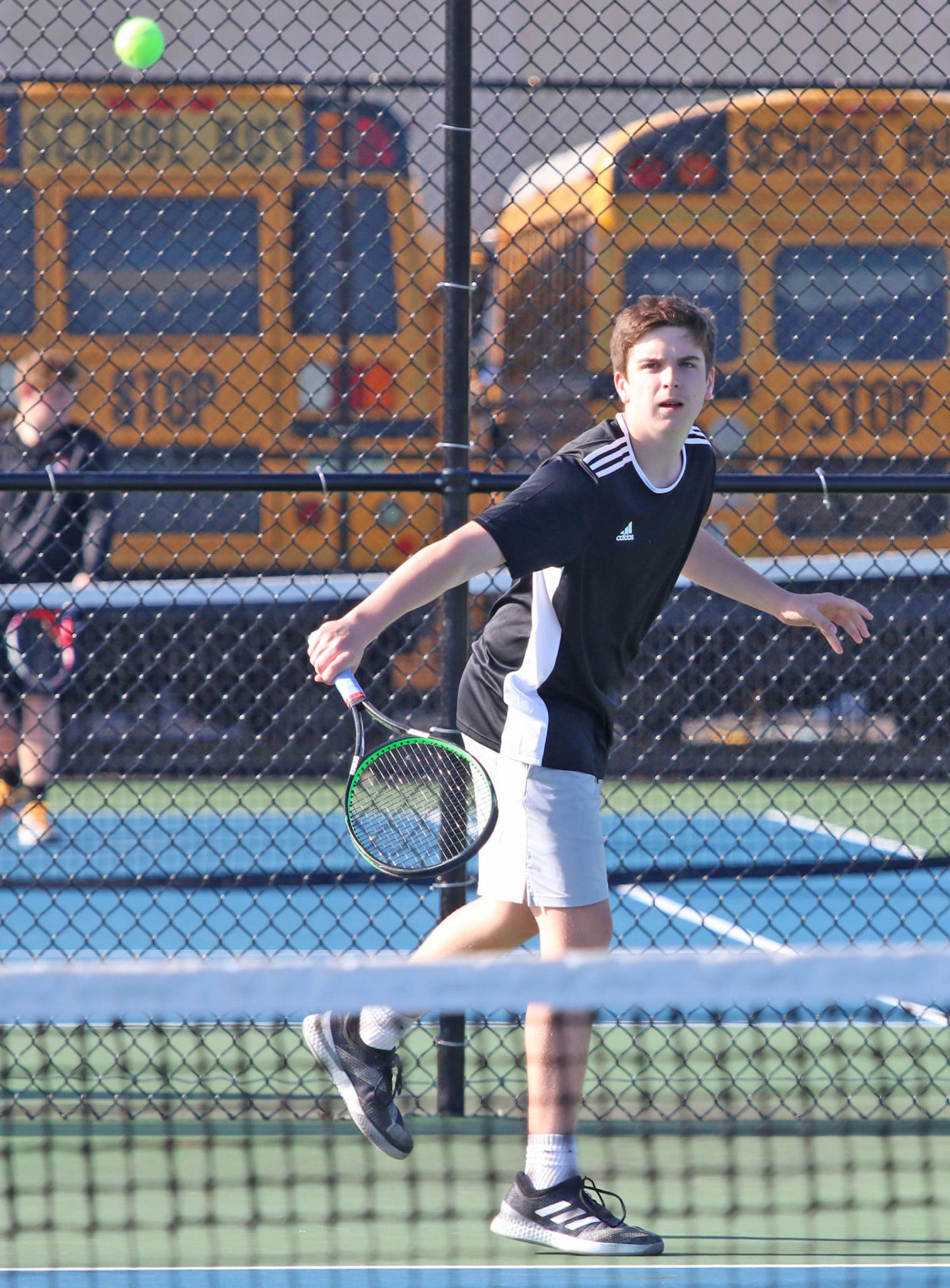 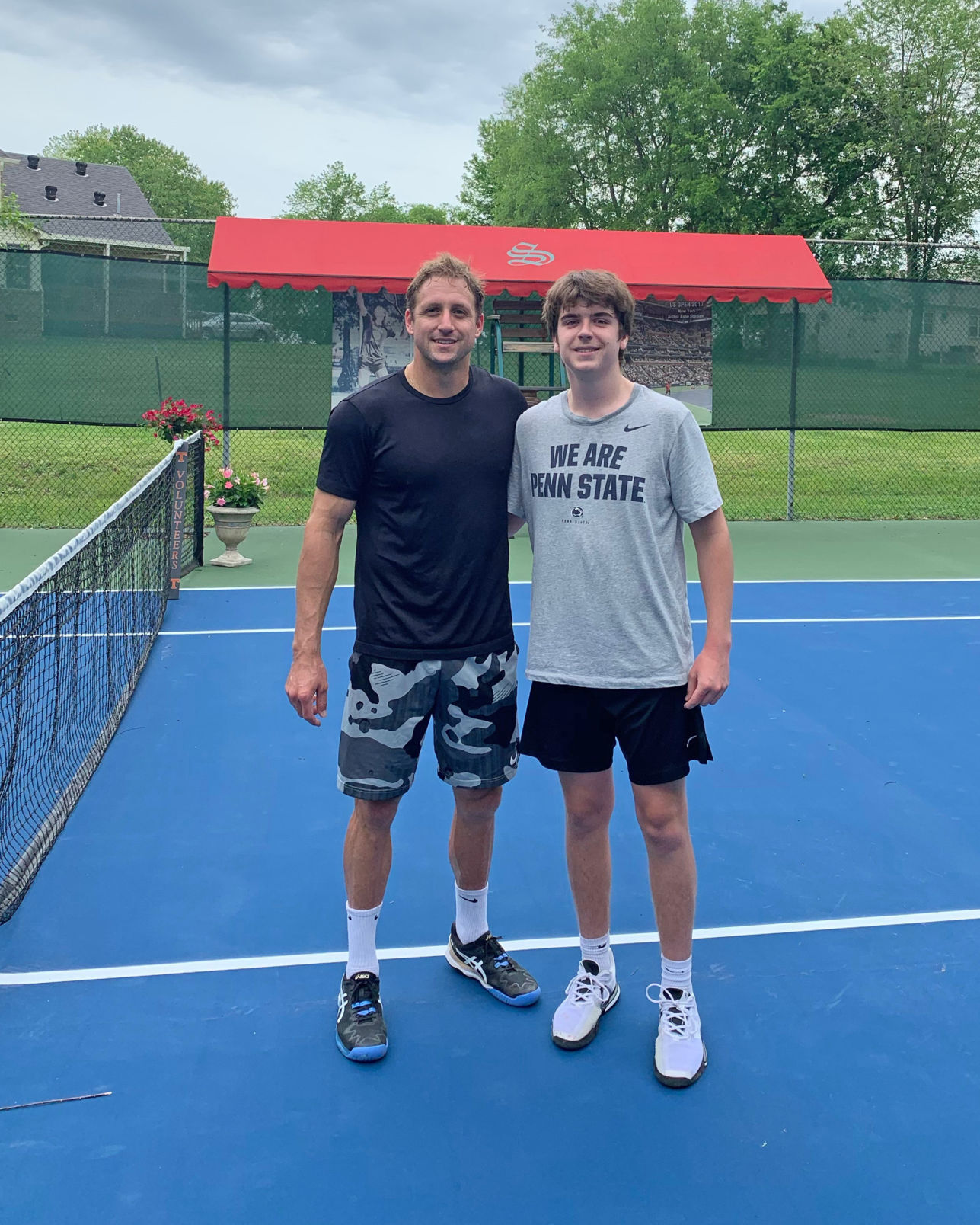 Penn Morrison stands with Tennys Sandgren, the 55th-ranked tennis player in the world, on Sandgren’s home court in the state of Tennessee. Sandgren played at the University of Tennessee before turning pro. Penn Morrison was able to have a hitting session with Sandgren, arranged by Morrison’s uncle who lives in Tennessee and knows Sandgren. 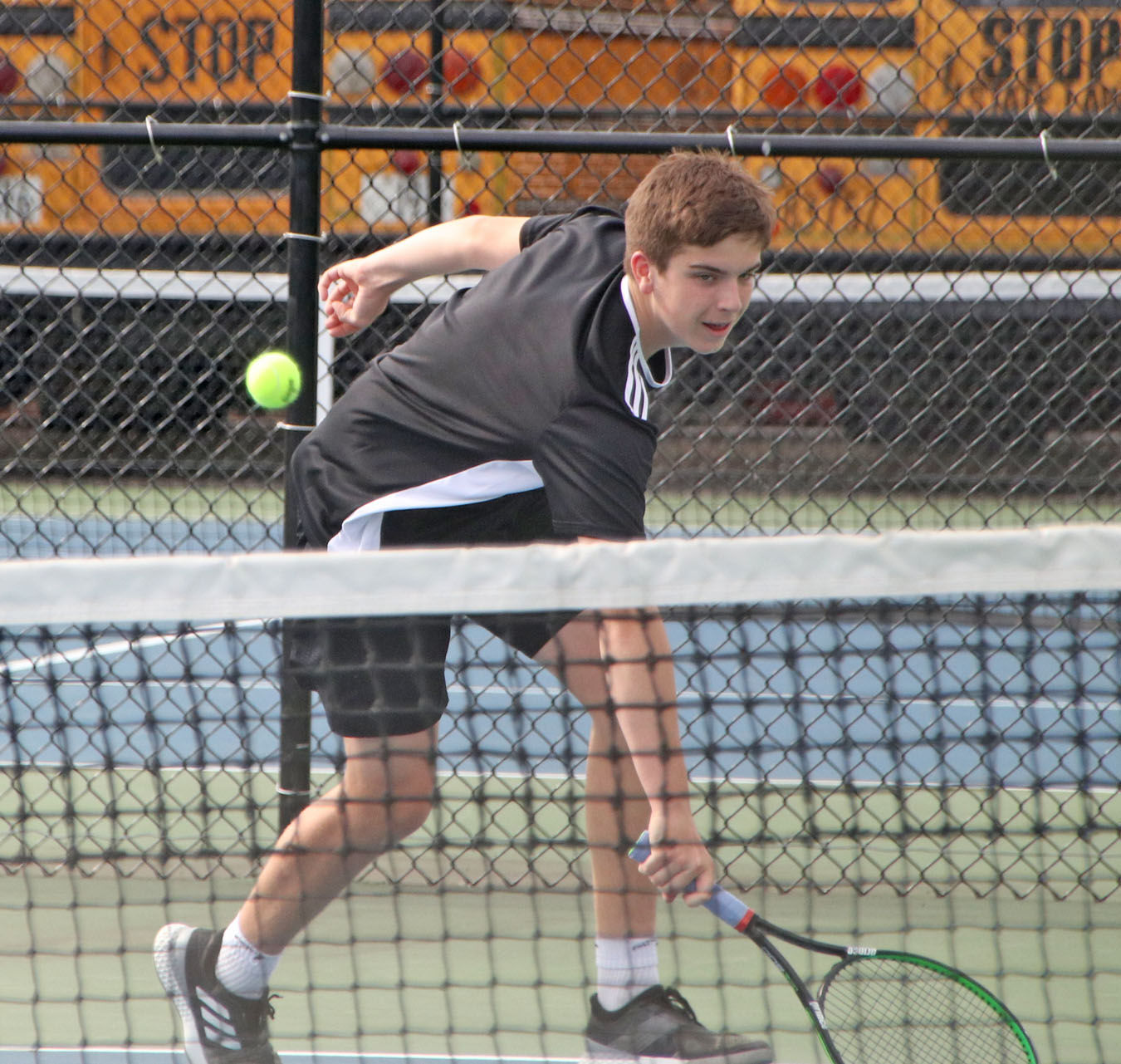 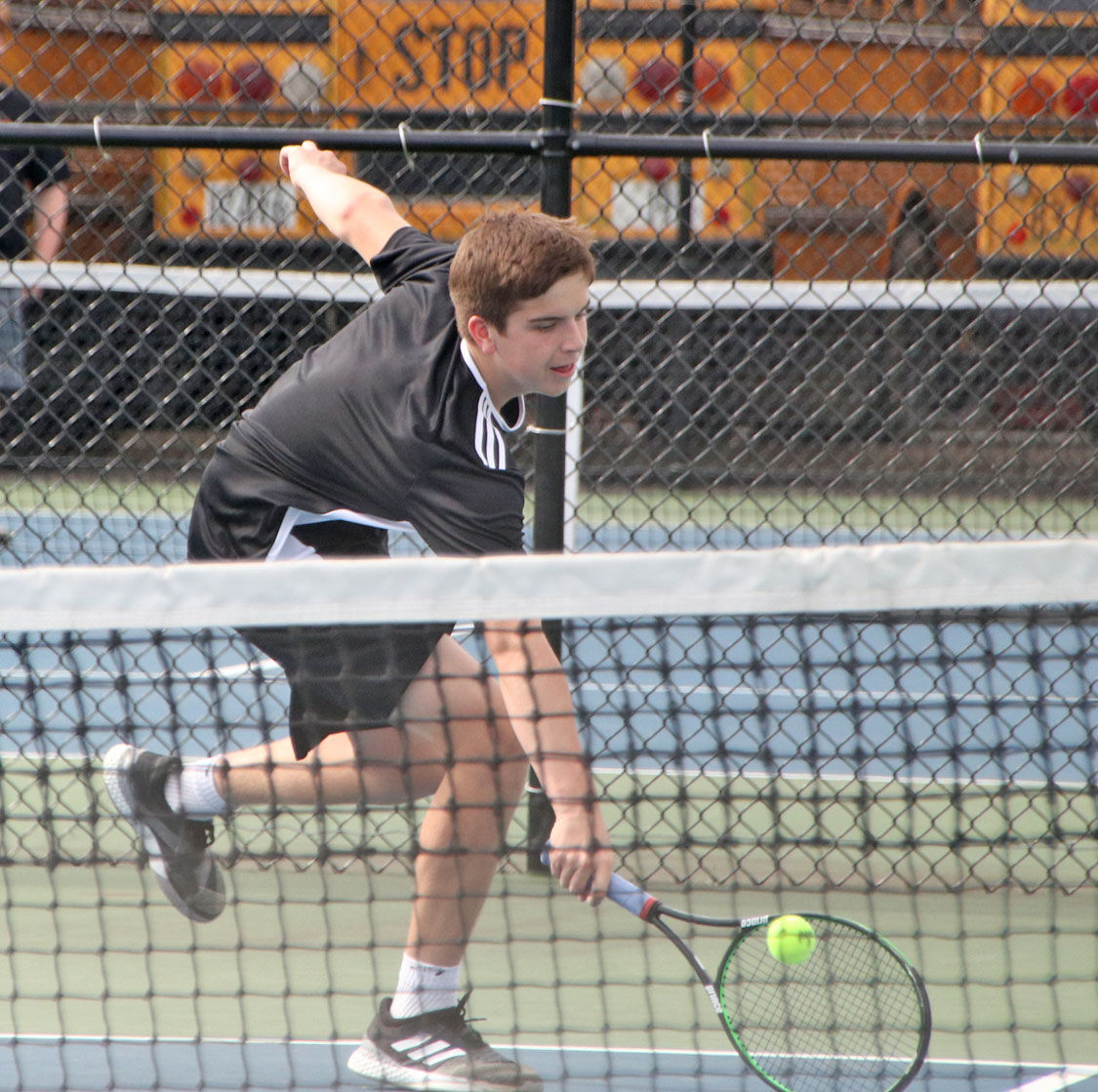 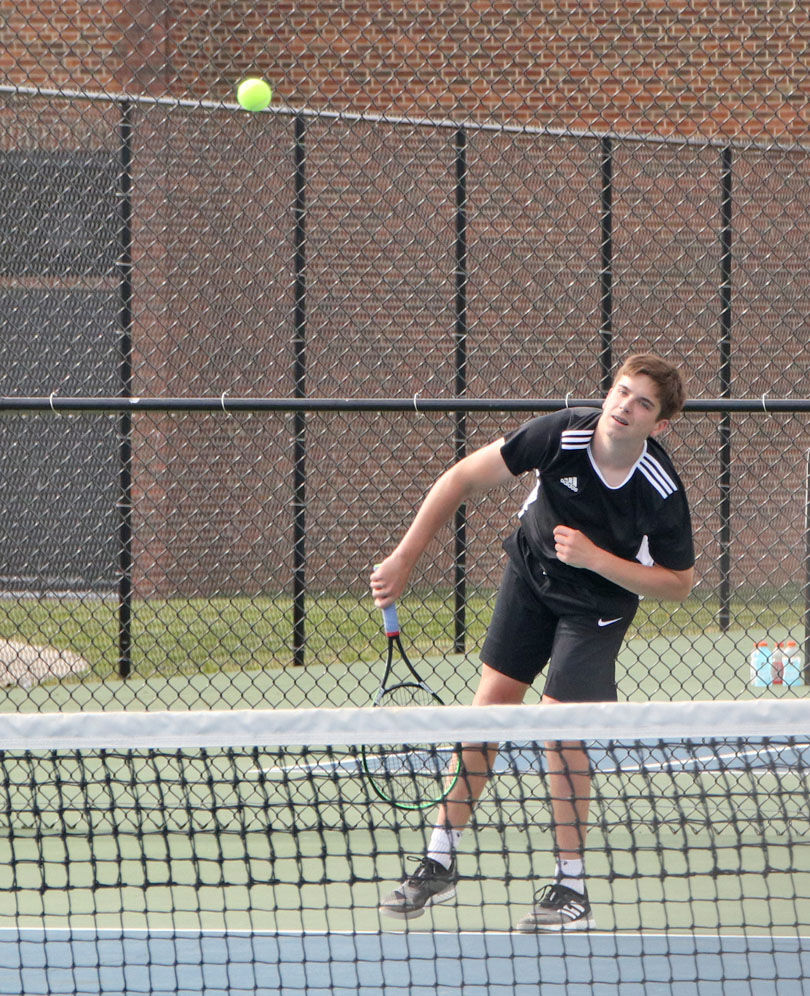 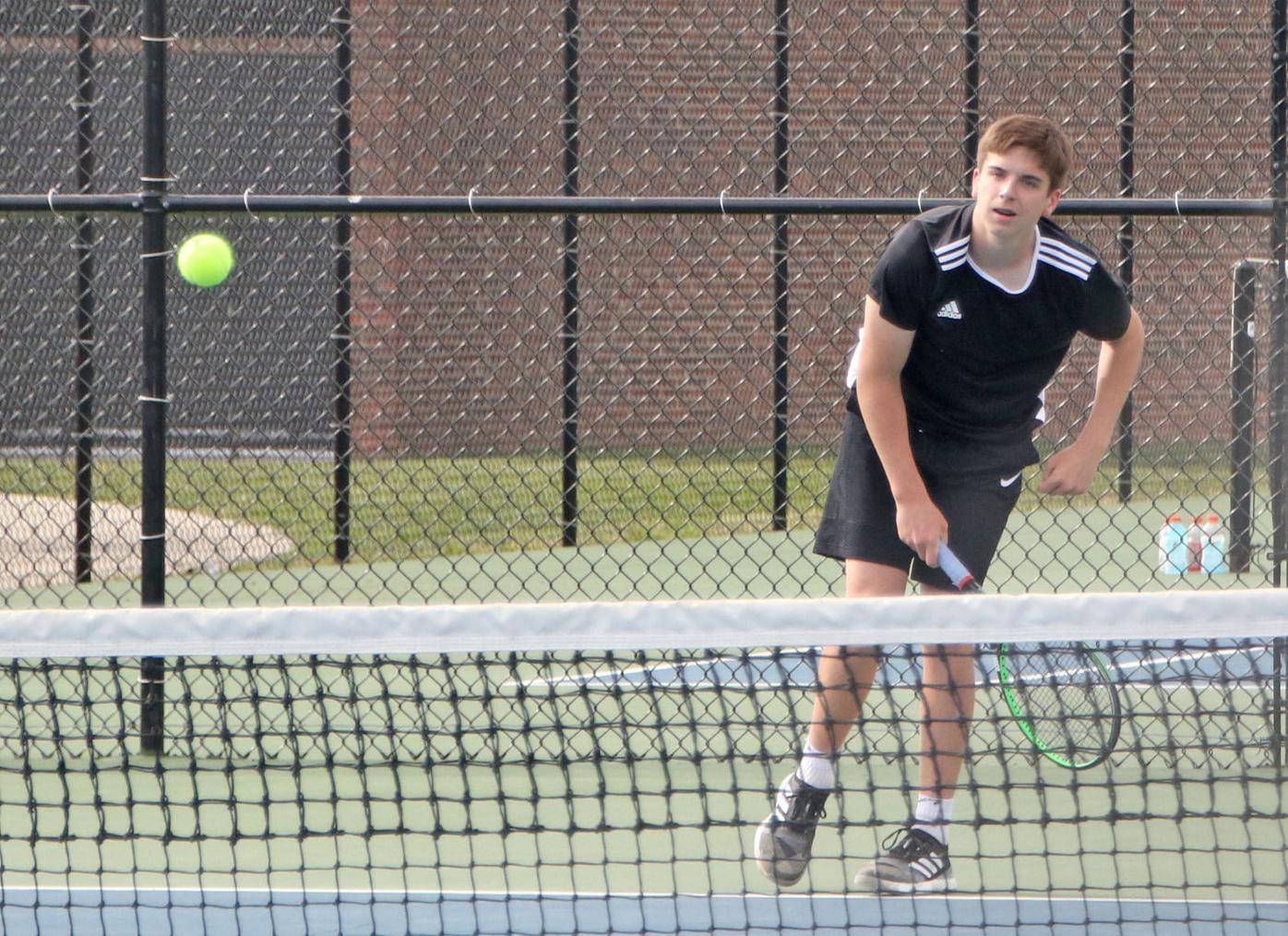 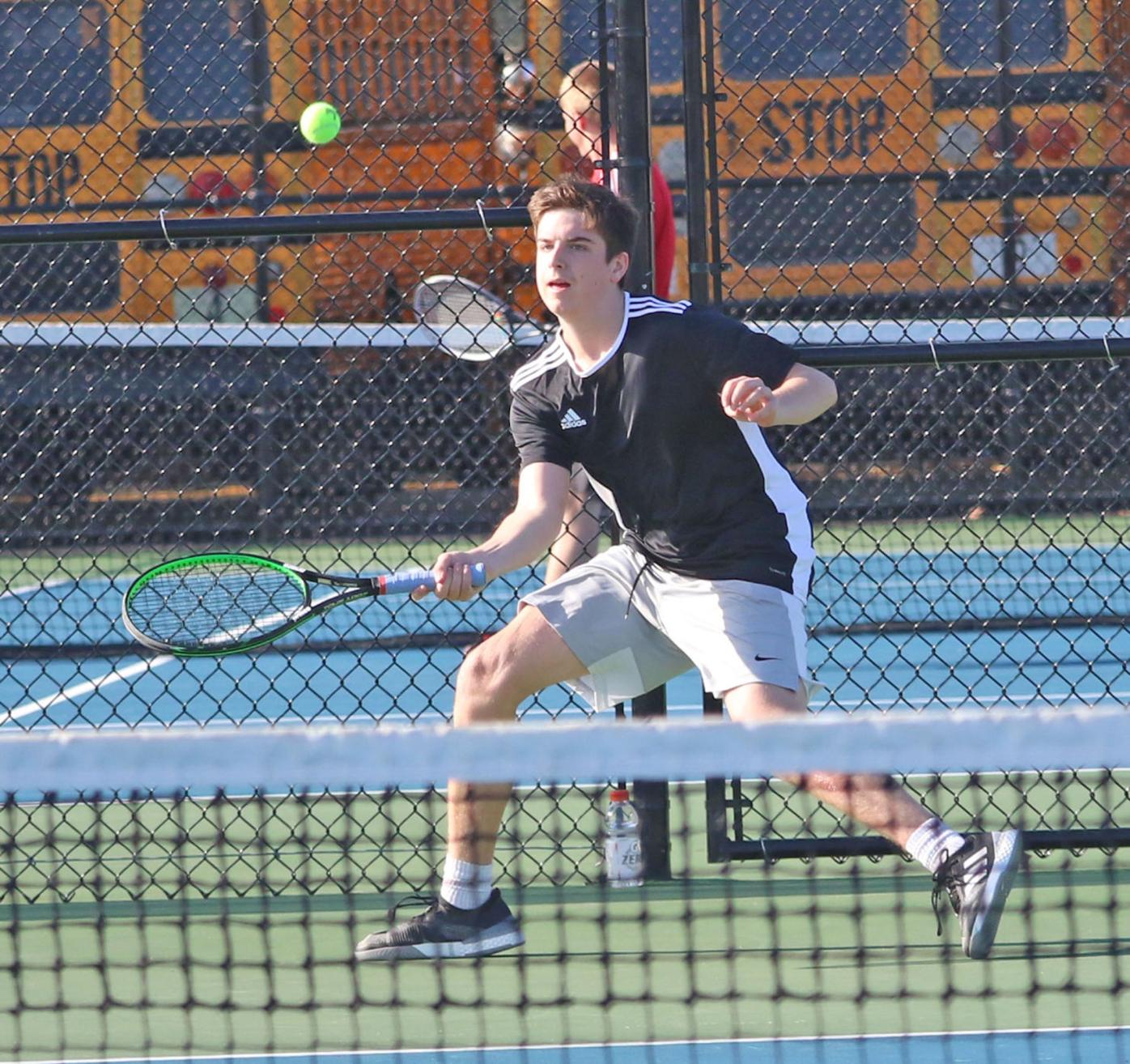 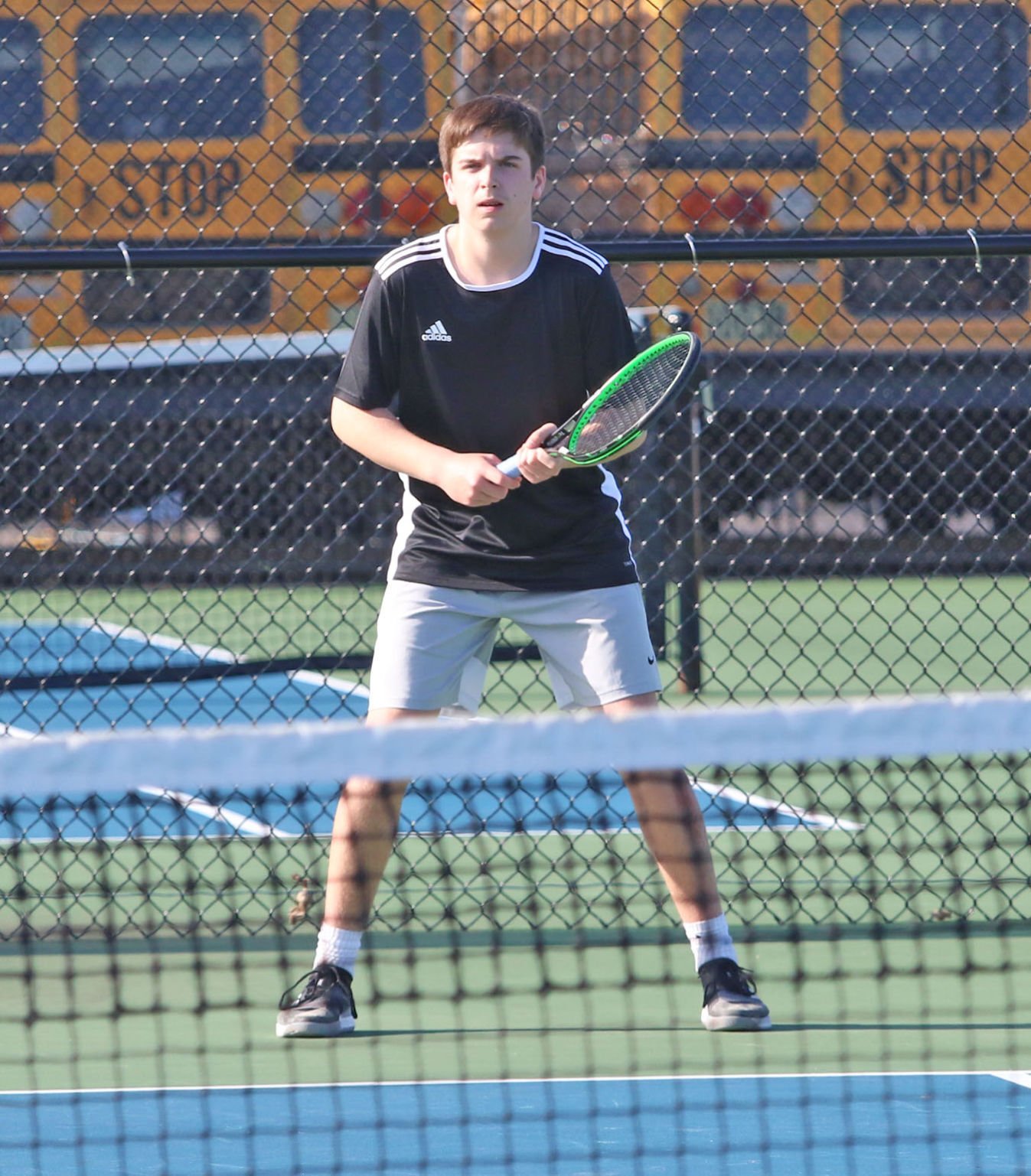 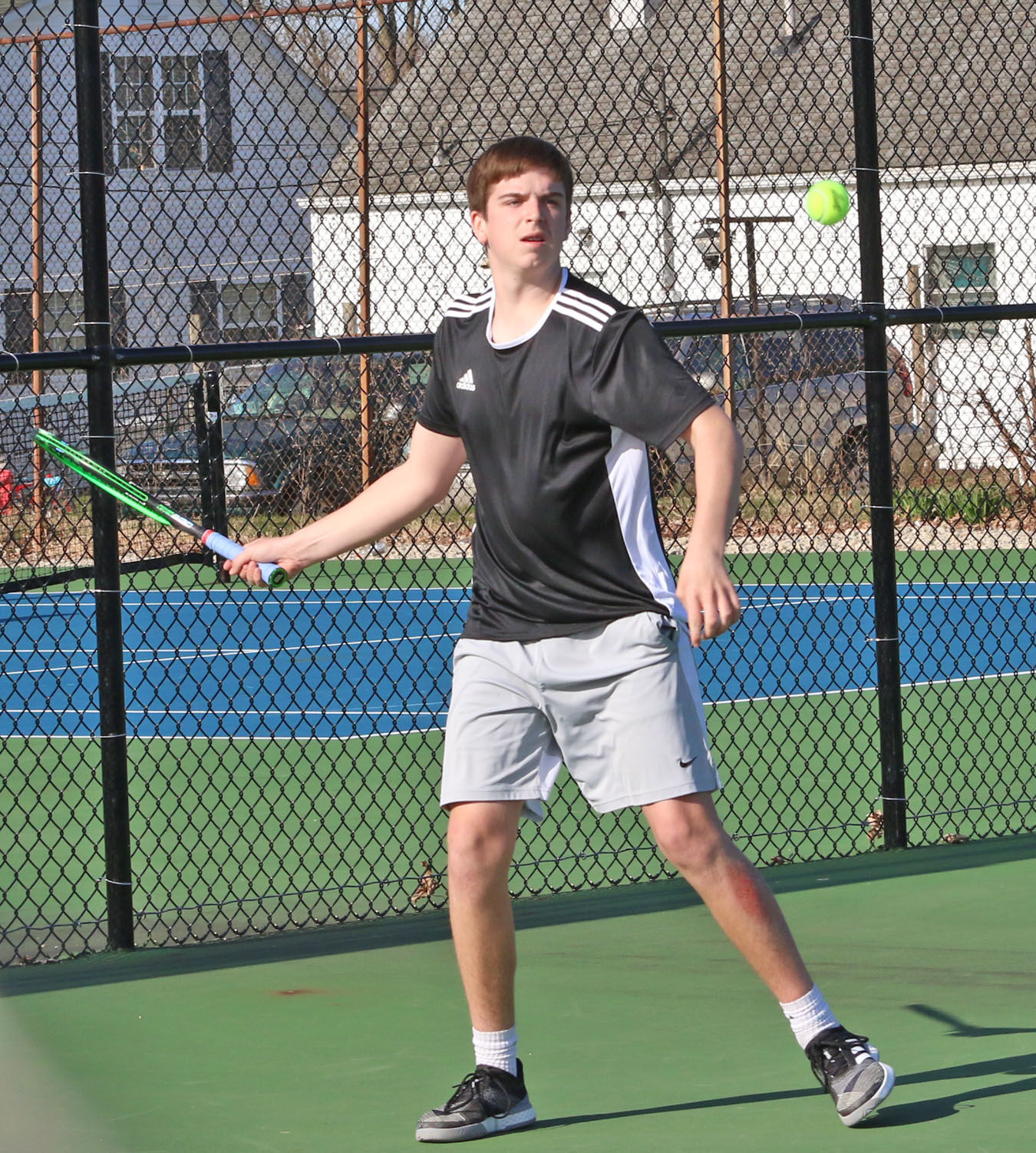 As a freshman tennis player at Waverly in the spring of 2019, Penn Morrison dominated the court, playing his way to the state tournament where he won a match and later learned he was named Second Team All-Ohio in Division II.

Penn Morrison stands with Tennys Sandgren, the 55th-ranked tennis player in the world, on Sandgren’s home court in the state of Tennessee. Sandgren played at the University of Tennessee before turning pro. Penn Morrison was able to have a hitting session with Sandgren, arranged by Morrison’s uncle who lives in Tennessee and knows Sandgren.

To be named an All-Ohioan in the sport of high school tennis, a match has to be won on the top stage of the sport.

Waverly’s Penn Morrison did just that during the 2019 season, becoming the first singles player to do so for the Waverly Tigers at the annual state tournament. It wasn’t until later that Morrison learned he had been named Second Team All-Ohio in Division II.

Unfortunately for Morrison and the Tigers, the 2020 season was not to be, as the COVID-19 pandemic took spring sports away across the state of Ohio and other places.

As a program that has grown and seen tremendous success over the past four years, Waverly tennis players have made their way to the state tournament in three of those years.

Brandon Nibert qualified as a sophomore, junior and senior, but he wasn’t able to record a victory at state. Nibert’s senior year was Morrison’s freshman year and both qualified after playing their way to a district final battle against each other. Morrison ultimately won that match and took the top seed from the Southeast District to the state tournament.

Also in that year, then senior Ryan Dunn and junior Chase Downing nearly qualified for state in doubles after finishing as district runners-up.

The Tigers won three straight Southern Ohio Conference titles in 2017, 2018 and 2019. They also went undefeated overall in 2017 and 2018. In 2019, they stepped up their schedule, playing some challenging Columbus opponents, which ended their undefeated run, but it left the Tigers better prepared for tough competition.

Recapping that state match on May 24, 2019, Penn Morrison went into the contest not feeling any pressure as a freshman.

With that lack of pressure, Morrison was able to win his first-round state match at the Lindner Family Tennis Center in Mason. Morrison dropped his first set 4-6, but he came back to take the next two, 6-2, 6-2, defeating Mansfield St. Peter’s senior Luke Heinrich. Those two players had the only three-set match of the first round.

“I was in a tough first match,” explained Morrison, looking back at his state appearance. “I lost the first set and won the next two. It was super hot that day. It took everything out of me. You only get 30 minutes after the match for a break.”

Ultimately a well-rested Morigone was able to use the momentum he gained by winning the first set over Morrison 7-5 to cruise to a 6-2 win the second.

“I didn’t have enough left to get it done,” said Morrison. “If I could have won that first set, it would have been all different.”

Looking back at his win, Morrison said, “It was a great feeling. I was a little nervous that I was going to lose. After I won, I was focused on winning the next match. After it was over, it was like, ‘Wow, I actually won a match at state.’”

That experience fueled Morrison to step up his tennis play coming into his sophomore season in hopes of making it back to the state meet and winning more matches. But those hopes ended several months ago when the 2020 tennis season was canceled.

“The coronavirus messed it up. I was trying to hit three to four days a week outside of tennis season. I’ve been trying to hit with Aaron Koch, the instructor for the Chillicothe Racquet Club, once a week,” said Morrison. “Aaron gives me someone else to compete against. He gives me pointers to help make me better. My dad can teach me things that Aaron can’t, and Aaron can teach me things that my dad can’t.”

Penn Morrison, who is Coach Matt Morrison’s son, has been on the tennis court seemingly his whole life.

Penn, who ultimately has the same name as one of the top-rated tennis balls on the market, gravitated to the sport early.

“We started doing things with tennis balls when he was three or four,” said his father and coach Matt Morrison. “He has been around the sport his whole life. Penn is blessed with talent. He is playing a sport that is deceptive. Everyone thinks it is easy. He’s never taken formal lessons.”

“I’ve always loved tennis. I just play my own style. My dad taught me so much,” said Pen Morrison. “Some days I get lazy and I don’t want to come out and work. I’m getting better and coming out to work more and more. I ran track in eighth grade, and that was when I started slacking on tennis. That’s when I was slacking big time, but I am picking it back up.”

Another inspiration came in the form of getting to hit with professional tennis player Tennys Sandgren in the state of Tennessee. Morrison’s uncle, who lives there, arranged the hitting session with Sandgren for his nephew.

“I had the great opportunity to hit with Tennys, who is 55th in the world. I learned a lot from him. It was a great experience that motivated me even more to be able to hit with him,” said Morrison.

“Tennys told me that I have to work hard if I want to go to college for it. He told me I could go to college somewhere for it if I work hard enough. He gave me some tips on my backhand and other little things.”

A couple of smaller colleges were looking at Penn and inquiring about him at the state tournament. Playing tennis in college could be part of the future plans.

Morrison’s off-season tennis has been slowed some by a shoulder injury from football. He received treatment and therapy, but was still having some issues. The next step is surgery if it doesn’t heal.

Morrison is hopeful that he and the football Tigers will have a season this fall. Last year on the gridiron, Morrison was third in receiving yards on the team with 21 catches for 246 yards and three touchdowns. On defense, he was also in the top 10 in tackles, forced a fumble, and recorded four interceptions.

But outside of football, concentrating on tennis is where it is at for Morrison, who hopes to step up his tournament play in the off-season.

“I’ve played in some tournaments in Columbus, Huntington, and Ashland. There is usually a lot of competition in Cincinnati,” said Morrison. “Most of them are double elimination, so you are guaranteed at least two matches. I’ve won some of the smaller ones.”

So Morrison will continue to work and build on his successes, as he looks to complete his final two years as a Tiger and take tennis into his future.