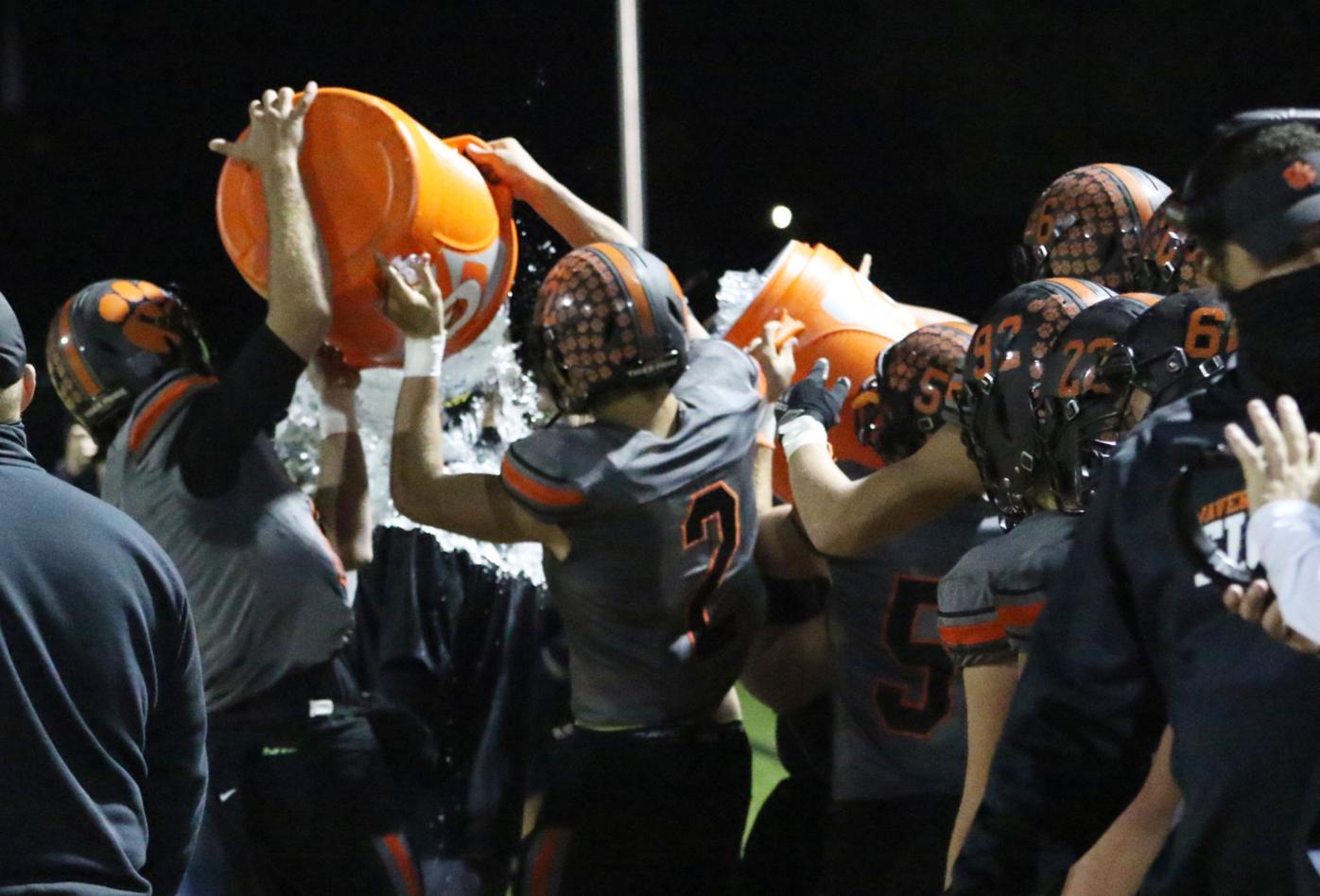 Haydn’ Shanks and Zeke Brown, along with several others, give Waverly Coach Chris Crabtree an icy shower after the 63-16 win on Friday night over the Oaks to end a perfect regular season. 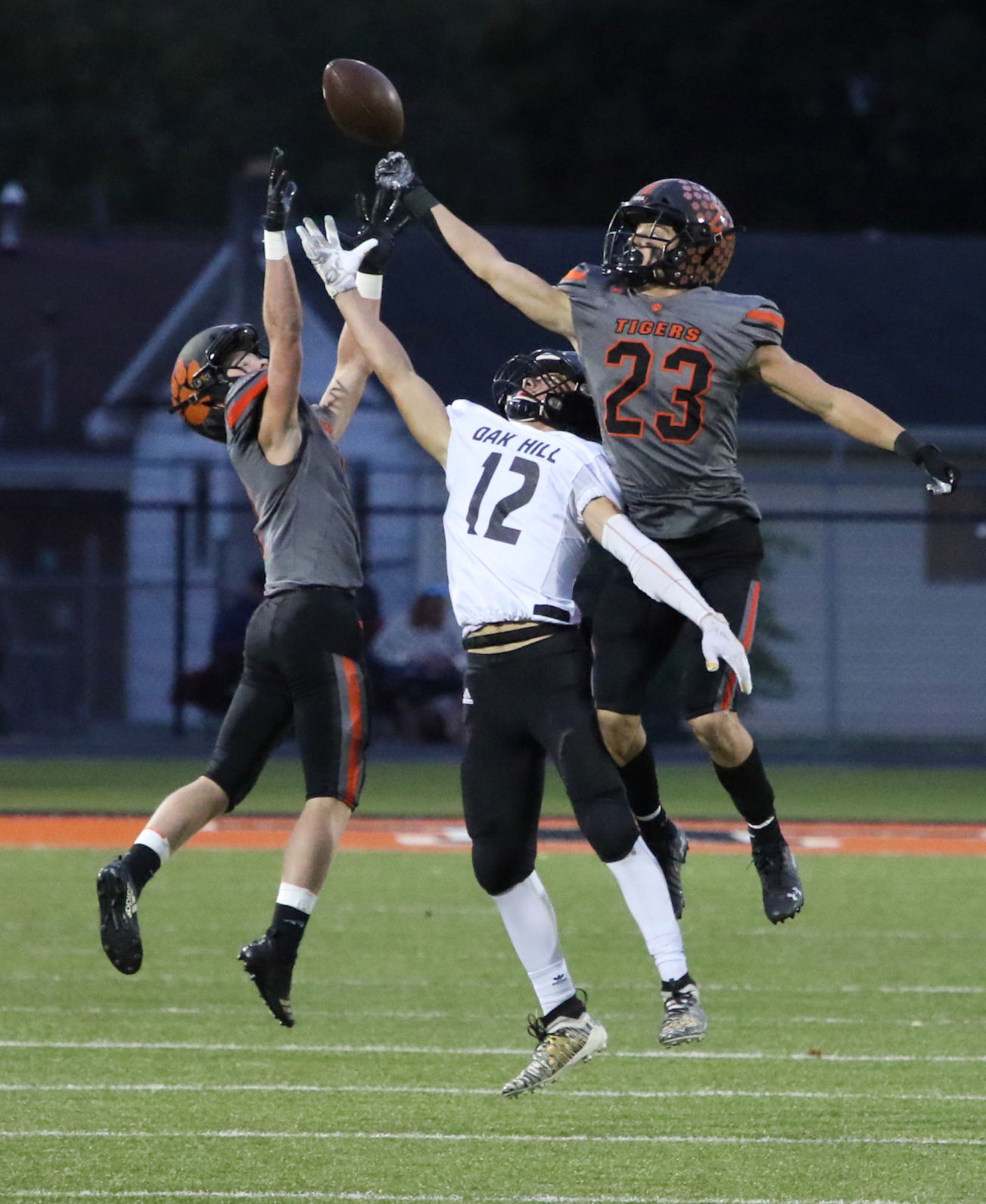 Phoenix Wolf (23) and Mark Stulley break up a pass intended for Oak Hill receiver John Mullett during the first half of play in Friday’s 63-16 win. 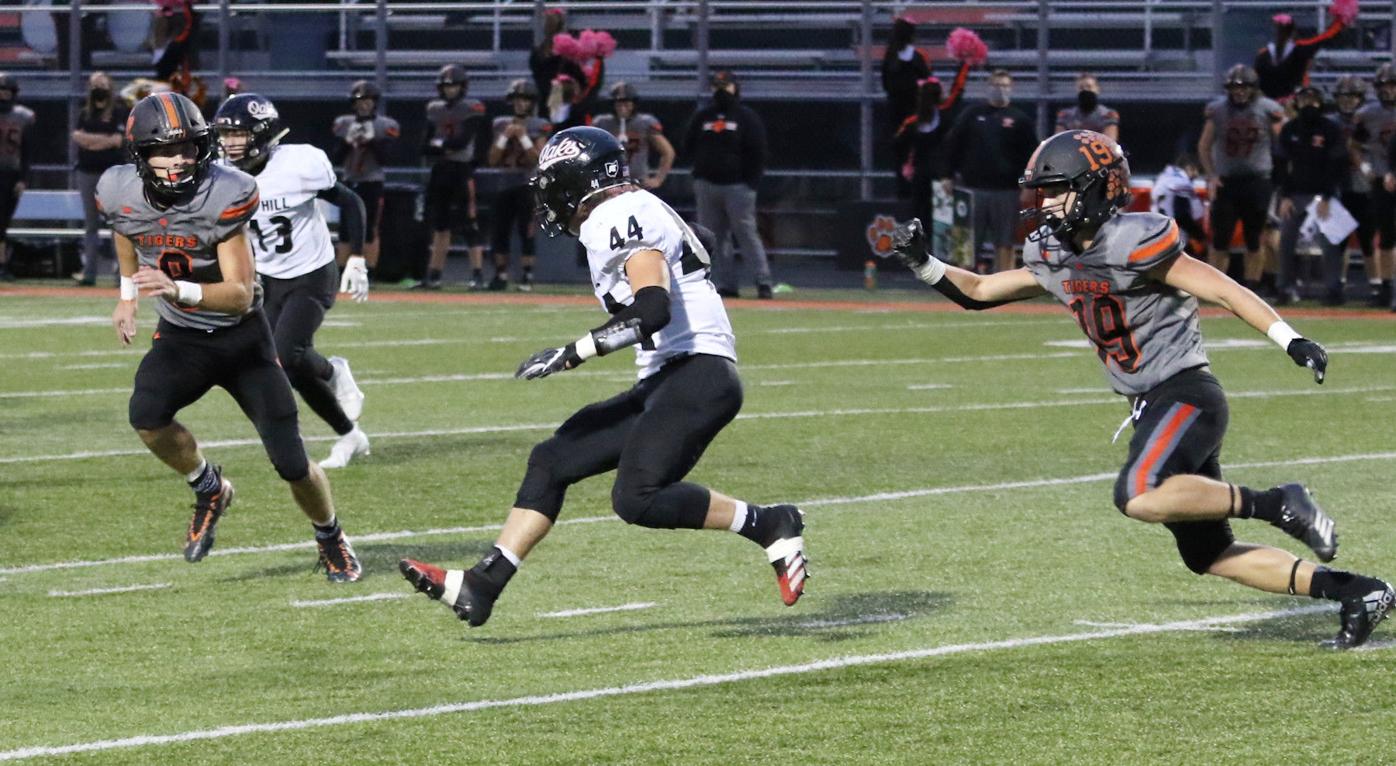 Wyatt Crabtree prepares to tackle the Oak Hill punter after he has no choice but to pick up the ball and try to run for a first down. Crabtree delivered the tackle for a 7-yard loss with senior Keith Doughman coming in to assist.

Haydn’ Shanks and Zeke Brown, along with several others, give Waverly Coach Chris Crabtree an icy shower after the 63-16 win on Friday night over the Oaks to end a perfect regular season.

Phoenix Wolf (23) and Mark Stulley break up a pass intended for Oak Hill receiver John Mullett during the first half of play in Friday’s 63-16 win.

Wyatt Crabtree prepares to tackle the Oak Hill punter after he has no choice but to pick up the ball and try to run for a first down. Crabtree delivered the tackle for a 7-yard loss with senior Keith Doughman coming in to assist.

It has been a long time coming.

The win moves Waverly to 6-0 for the regular season and 5-0 in the SOC II, wrapping up a perfect shortened season. The last time the Tigers had an undefeated season and the league crown came in 2006. That was when Trevor Walls quarterbacked the Tigers and set the school passing touchdown record. Waverly senior quarterback Haydn’ Shanks surpassed Walls’ 67-pass TD mark in last week’s win over Minford and added to against the Oaks.

“We fought through a lot, but here in week six we get the big payout,” said Zeke Brown. “We are SOC champions. We have worked four years for that title. It is a good feeling for the playoffs.”

Now the Tigers will have a full two weeks to devote to preparing for their playoff opponent, since they received a first-round bye in the Division IV Region 16 bracket. With the season shortened due to COVID-19, all Ohio High School Athletic Association varsity football teams had the opportunity to opt into the playoffs this season. The Tigers were seeded fourth in their region and will await the winner of 13th-seeded Norwood and 20th-seeded Cincinnati Schroder. Those two teams will square off on Saturday, Oct. 10 at Norwood. The winner will come to Waverly for a Saturday, Oct. 17 playoff game versus the Tigers.

Wheelersburg has been perennial SOC II football champions for years and Waverly’s nemesis. The 36-35 overtime victory over Wheelersburg on Sept. 18 put the Tigers in the driver’s seat for the league championship. They just had to take care of business. They did by winning at Minford 42-6 last week and capping the run with the 63-16 triumph over Oak Hill in front of the home crowd at Raidiger Field Friday night.

The Tigers scored on their first five possessions. The Oaks had the ball first and couldn’t pick up a first down against the Waverly defense. Oak Hill’s punt gave the ball to the Tigers at midfield. Waverly used six plays to go 54 yards, capping it with a 2-yard run from Jaxson Poe and an extra point from Ben Flanders to go up 7-0 with 8:31 left in the opening quarter.

Waverly’s defense pushed the Oaks backwards on their next series, resulting in a punt attempt on 4th-and-14. A bad snap forced Oak Hill’s punter to try and run for it, but Wyatt Crabtree was there to tackle him for a loss of seven yards. That play gave the ball to Waverly’s offense on Oak Hill’s 29-yard line.

After Peyton Harris carried the ball 12 yards on the first play from scrimmage, Waverly quarterback Haydn’ Shanks aired the ball out to Will Futhey for a 17-yard touchdown strike in the end zone. With Flanders adding the kick, Waverly was up 14-0.

The Oaks countered with a clock consuming drive, pulling within six briefly 14-8 after an Alex Firpo rushing touchdown and conversion. But the Tigers roared right back, finishing a five-play 53-yard drive with another rushing touchdown from Poe, who scored from one yard out. Flanders finished the drive with the kick, making the lead 21-8.

Oak Hill’s next attempt ended quickly. On 4th-and-6, Waverly senior Keith Doughman was there for the stop to get the ball back for the Tiger offense on the Oak Hill 38 yard line. After a short run from Poe for a pair of yards, Shanks went to Will Futhey on a 35-yard strike. Flanders added the PAT, making it 28-8.

Waverly had the opportunity to score again before the half, capping a seven-play, 56-yard drive with a 7 yard pass from Shanks to Zeke Brown, pushing the lead to 35-8 after the kick from Flanders.

The Tigers scored first to open the second half in the same way they ended the half — with a 7-yard pass from Shanks to Brown. On the next drive, it was a 9-yard pass to Phoenix Wolf, as the lead grew to 49-8.

Oak Hill had another opportunity to score, finishing a drive with a 19-yard run from Connor Dickens. Firpo had the conversion rush, making the score 49-14.

The next Waverly drive was a highlight reel of its own. Backup quarterback Wade Futhey fired a short pass out to Mark Stulley, who evaded defenders and outsprinted everyone for an 80-yard touchdown. Flanders followed it up by connecting on a drop-kick point-after kick, making the score 56-16.

Wade Futhey added another touchdown on Waverly’s final scoring drive on a 12-yard scamper. Flanders kicked the final point the same way he did the first seven, with Phoenix Wolf holding, and was a perfect 9-for-9 on the night.

“It was great that these guys were able to get me a lead, and we were able to try the drop kick this year,” said Flanders. “I tried it last year a couple of times (in JV games) and it never worked out. It is great I was able to make it this year. It is something I like doing.”

The Tigers ended their night with 21 first downs, compared to 14 by the Oaks. Oak Hill had 224 yards off offense with 189 of those coming on the ground. Waverly generated 451 yards with 92 on the ground and 359 through the air,

“It was nice to come out here and win SOC finally after four years of working hard. It is special to be able to get this in our senior year with everything going on, only getting to play six games and COVID,” said Shanks.

“It just goes to show you how much hard work we’ve put in during the offseason. Hats off to the receivers, the linemen and everyone on the team who keeps the pressure off of me and the receivers going to make plays for me. I just throw the ball to them and they go make all of the plays and make me look good.”

Poe also had 8 rushes for 50 yards and a pair of touchdowns. Poe has taken the lead running back role in recent weeks.

“I was always the backup,” said Poe. “Whenever Dawson Shoemaker got hurt in the preseason, that left an opportunity for me to step up. I’ve done my job. Truthfully, I don’t really run the ball much; the offensive line does it all for me. I just have to get through.”

Defensively, Zeke Brown led the way in tackles with 9. Sophomore Wyatt Crabtree had a fumble recovery and a total of 7 tackles including tackling the punter for a 7 yard loss.

“It really means a lot to our senior class to achieve this after four years of working in the offseason,” said senior lineman Blaise Reader of the undefeated run and the SOC II title. “We put in everything we had to finally get to this point. We had to keep setting our goals and keep going after them.”

Senior center Spencer Pollard added, “It is well deserved and well earned. We work every week just to make sure we get the job done. It paid off.”

The Tigers will have a little time to celebrate before they get back to work.

“It has been a dream of ours for a while,” said Will Futhey. “We’ve known since fifth and sixth grade that this group was really special. We always talked about it and now we are living it. It is a surreal moment and we are cherishing it.”