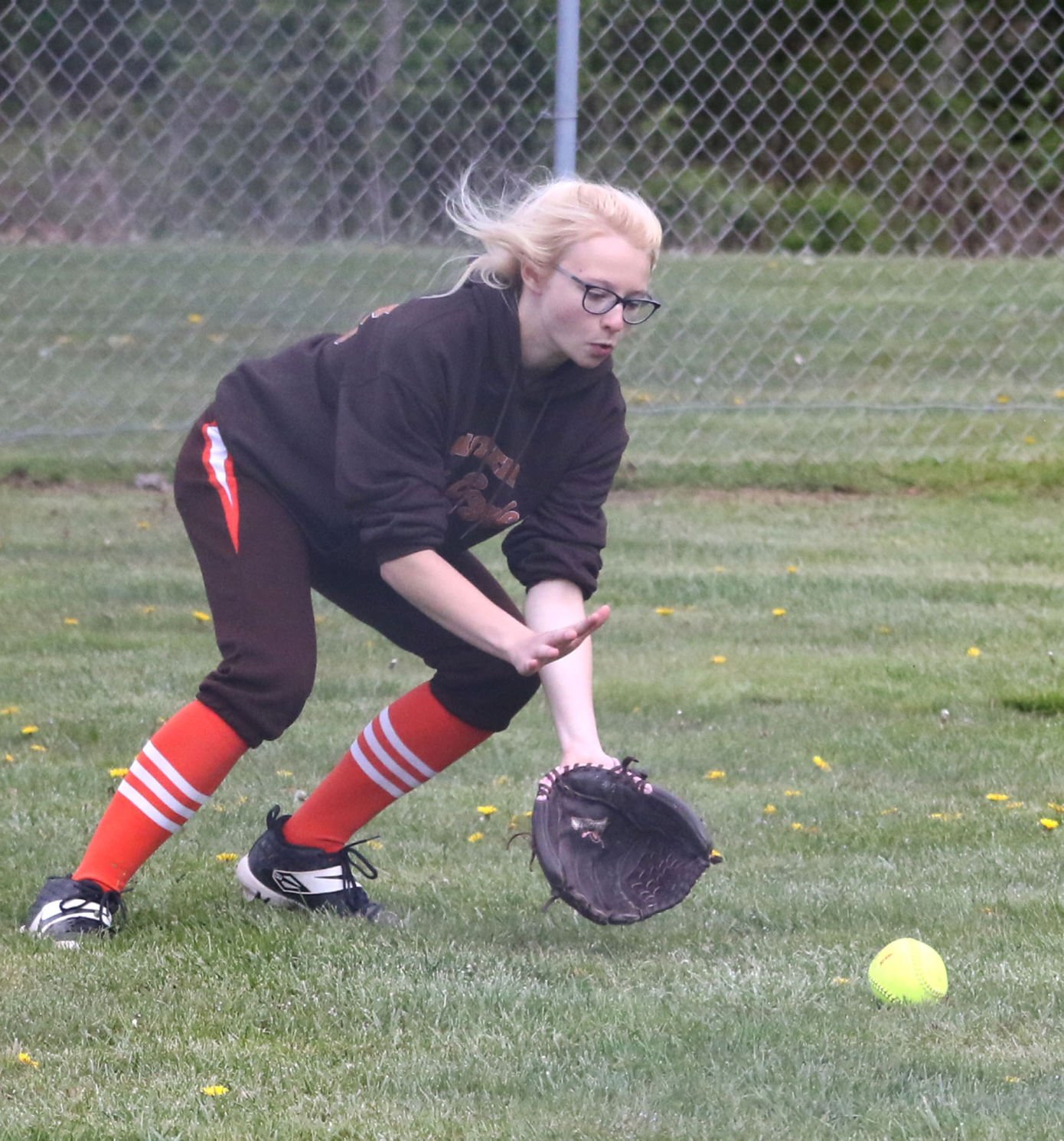 Eastern left fielder Moriah Compton goes down to scoop up a ball in the Oak Hill game on Friday evening. 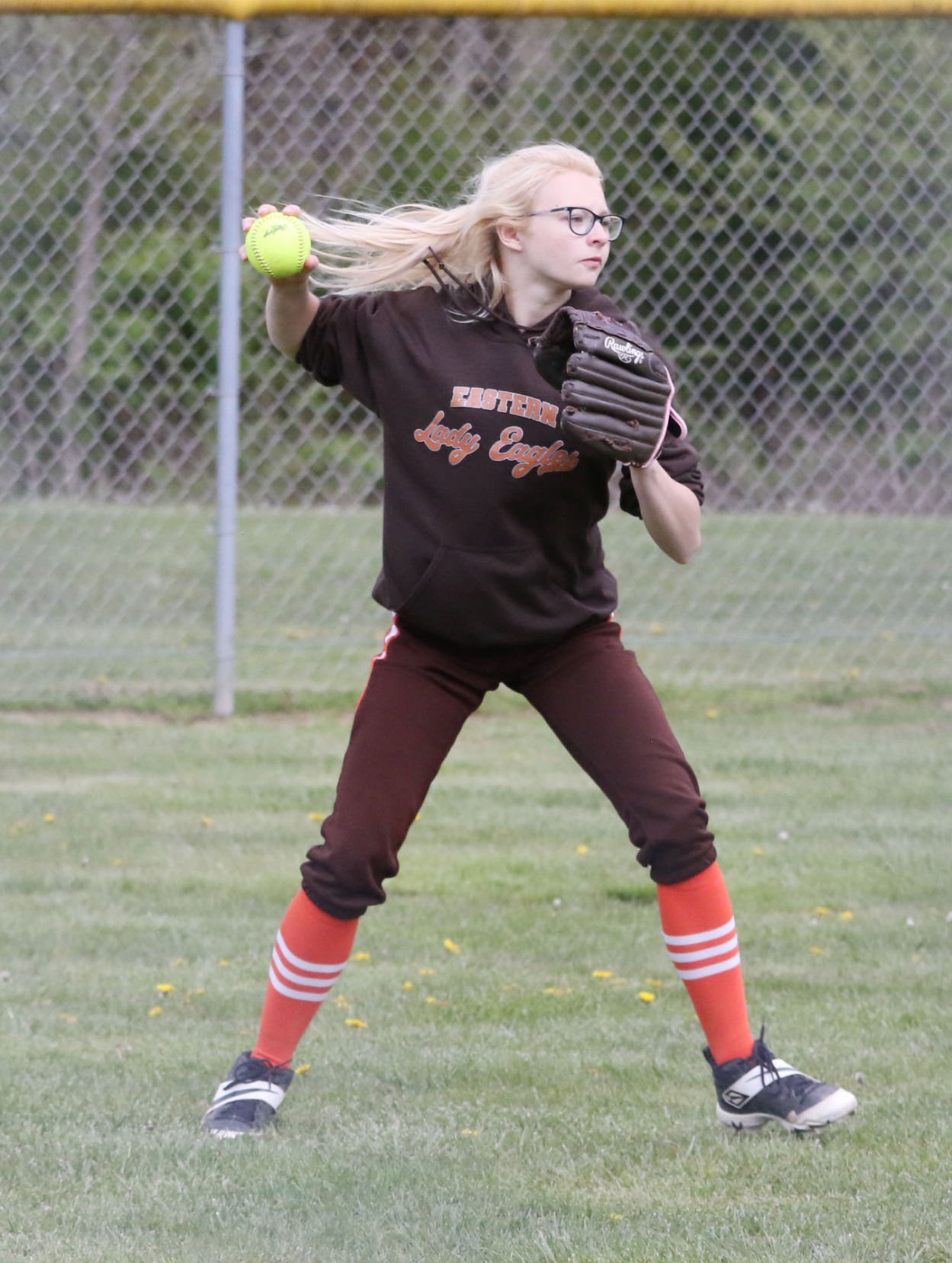 Eastern’s Moriah Compton comes up throwing after scooping up a grounder in left field versus Oak Hill. 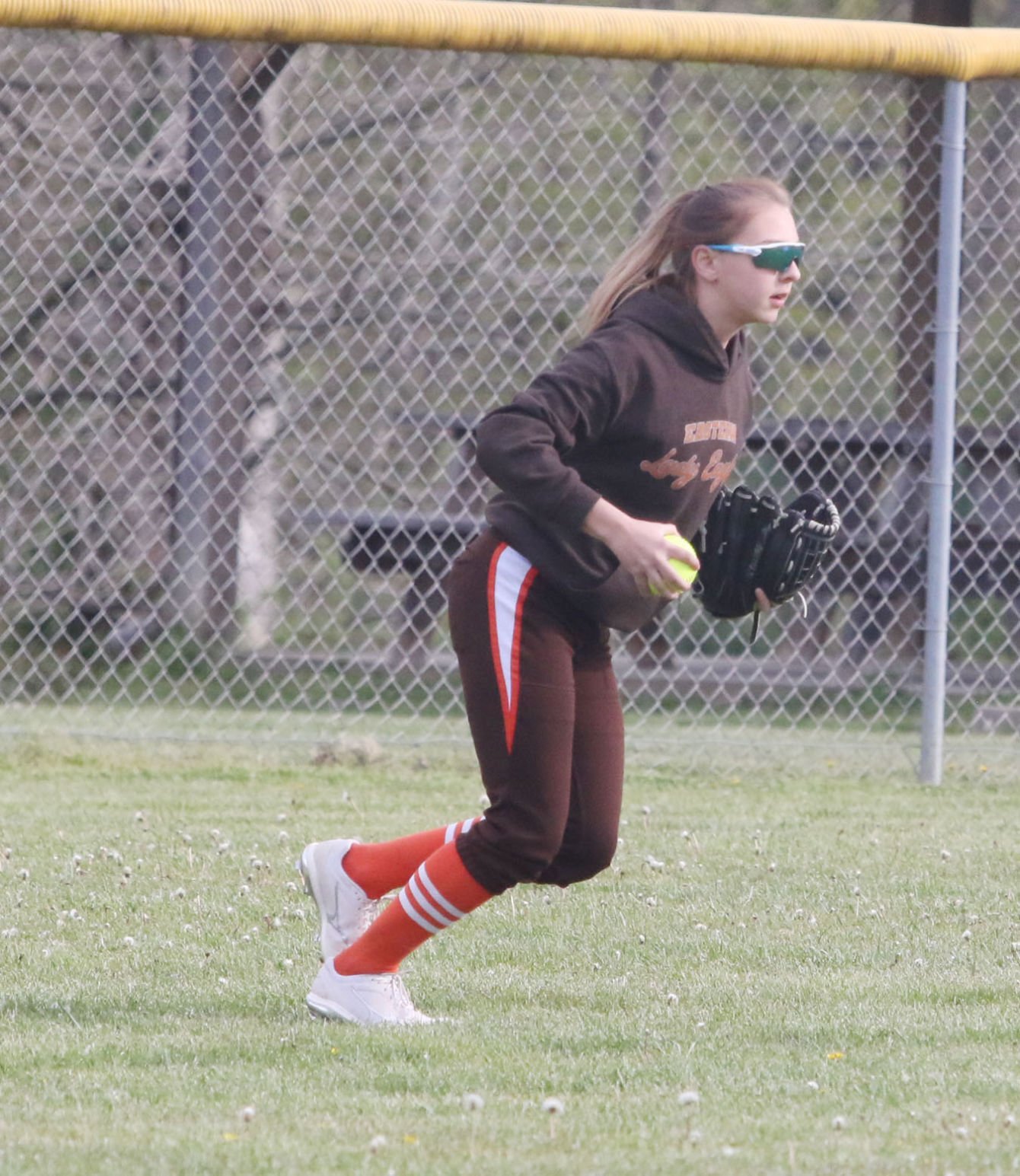 Eastern’s Kaylee Jones gets ready to throw after scooping up a grounder in center field during Friday night’s win over Oak Hill.

Eastern left fielder Moriah Compton goes down to scoop up a ball in the Oak Hill game on Friday evening.

Eastern’s Moriah Compton comes up throwing after scooping up a grounder in left field versus Oak Hill.

Eastern’s Kaylee Jones gets ready to throw after scooping up a grounder in center field during Friday night’s win over Oak Hill.

A tie was as close as the Eastern Lady Eagles could get to breaking through for their first Southern Ohio Conference Division II softball win in Friday night’s battle with Oak Hill.

The visiting Lady Oaks had pushed ahead with four early runs in the opening inning. Eastern rallied for one in the home half and three more in the second to make it 4-4. But Oak Hill followed with one run in third, another in the fifth, two in the sixth and two in the seventh to take the 10-4 conquest.

Errors played a big factor in the loss for the Lady Eagles. Of the 10 runs surrendered by freshman pitcher Hannah Felts, just two were earned. Felts gave up 11 hits, struck out two batters and walked two.

Oak Hill took advantage of a couple of miscues in the opening inning to scoot out to the 4-0 lead.

For Eastern, freshman Megan Nickell led off with a single to start the bottom of the first. She followed by stealing second and third before scoring on a passed ball, 4-1.

The Lady Eagles tied the game in the bottom of the second inning. Skylar White was hit by a pitch before Moriah Compton drew a walk. Both advanced into scoring position on a passed ball. A strikeout followed before Emma Young drew a walk to fill the bases. Then Nickell stepped up and doubled to left field, giving all three of her teammates the chance to score, 4-4. Next, Nickell stole third base. She became the final out on an unsuccessful home plate stealing attempt.

Oak Hill regained the lead in the top of the third inning with a run, 5-4. Eastern’s Chloe’ Dixon came up with a two-out single in the home half of the frame, but she could not score. Dixon had another single in the sixth inning, while Kaylee Jones produced the final EHS hit in the seventh. The Oaks finished their 10-4 win by scoring five runs in the final three innings.

From the plate, Nickell led the way, going 2-for-4 with a double, a run, three RBIs and three stolen bases. Dixon finished 2-for-3, while Jones was 1-for-3. Felts and White each added a stolen base.

After the loss, Eastern’s overall record moved to 6-11.

“It is a rough schedule,” said Eastern coach Josh Nickell. “We have been playing a lot better. We played really well against Racine Southern (double header split on April 17). We had a lot of girls who came out for the team who haven’t played before, so we are a work in progress and learning as we go. Each time, we get a little better. We are hoping to be ready for the tournament and be a tough draw for somebody.”

There are three seniors on the roster this year — Andee Lester, Chloe’ Dixon and Skylar White — all of whom are providing crucial contributions.

“Andee played her freshman year, hurt her knee her sophomore year, and then didn’t get to play because of COVID last year. So, this is just her second full high school season. Andee has seven home runs so far. She is picking up where she left off her freshman year. It is just a long time in between,” said Nickell.

“Chloe’ is our utility player and goes wherever I need her to play, whether it be second base, shortstop, or catcher. Skylar hasn’t played since junior high. I tried and tried to get her to play. The one thing she said she wanted to do was hit a ball over the fence this year, and she was able to do that. Skylar is doing very well and has played multiple positions. Wherever we ask them to play, they are happy to go do it.”

Members of the freshman class are contributing as well.

“Hannah Felts is throwing the ball really well. Megan Nickell has really hit the ball well lately. She’s her biggest critic, but she’s batting leadoff for a reason. Megan can do it,” said Nickell.

“I have great assistants helping me, Ed (father) and Cam (daughter) Alexander. They are both so knowledgeable. Cam is rehabbing from an injury and will be back playing softball for Shawnee next year. I’m grateful for her time here. The girls really look up to her.”

Nickell said they are also trying to make improvements to the field. They recently raised money for a windscreen and added additional fencing in front of the dugouts to give the players more space.

Eastern is scheduled to take on Valley at home on Wednesday evening.