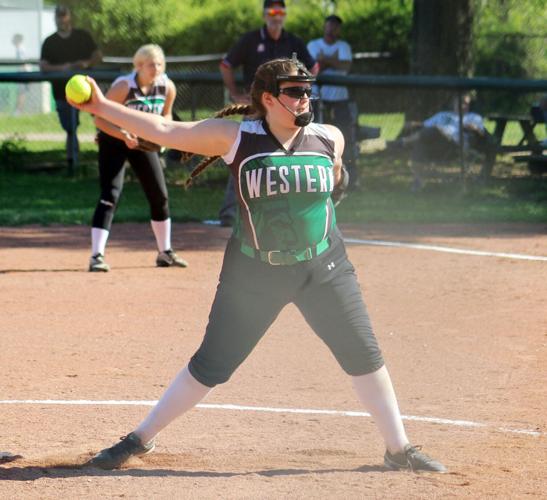 Western’s Lauren Ware delivers a pitch to a Green batter. 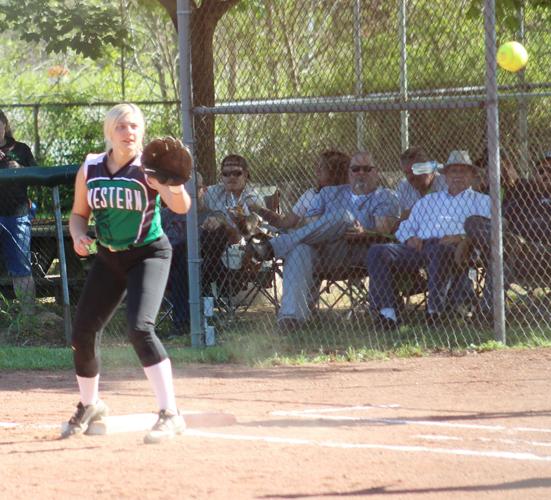 Western first baseman Kenzi Ferneau prepares to collect a throw from a teammate for an out.

Western’s Lauren Ware delivers a pitch to a Green batter.

Western first baseman Kenzi Ferneau prepares to collect a throw from a teammate for an out.

After gaining the early lead in Monday night’s sectional semifinal softball game at Green, the Western Lady Indians couldn’t hold it, resulting in a 9-1 loss to the hosting Lady Bobcats.

In the top of the first inning with one out, Western pitcher Lauren Ware started the offense with a single. Next, Morgan Whitley was hit by a pitch and Bailey Elliott walked to load bases. Hayleigh Thompson delivered a hard hit grounder to score Ware. With bases loaded, Kiela Gullett grounded into a 5-2 fielder’s choice before Green pitcher Gracie Daniel struck out the next batter for the final out.

Green countered with three runs in the bottom of the inning, taking a two-run lead, 3-1. Two innings later, Lady Bobcats produced six more runs and held the 9-1 lead the rest of the way.

After the first inning, Western was able to get runners to base in four additional innings, but no one could score. Faith Stone drew a leadoff walk in the top of the second, ultimately being stranded at third base. Morgan Whitley had a leadoff single in the third inning and was stranded at second base. In the fifth inning, Lauren Ware produced her second hit, a one-out double, but she was left there. Sophia Rhoads had a two-out walk in the sixth inning, but she didn’t move from first base.

Westen finished the game with three hits and committed four errors. Lauren Ware had two of those hits, going 2-4 with a double and a run. Morgan Whitley was 1-2. Hayleigh Thompson had the lone RBI.

Ware was charged with the pitching loss. She threw six innings, giving up nine runs, six earned, on eight hits, while striking out seven, walking four and hitting two. An additional intentional walk was issued to Green’s Kasey Kimbler, who was 2-3 with two RBIs.

Additionally for Green, Adriah Barber was 2-4 with two RBIs, two runs and was hit by a pitch. Emily Brady was 1-3 with a walk.

Green pitcher Gracie Daniels produced a two-run double in the third inning. She threw all seven innings, giving up one earned run on four hits, while striking out five, walking two and hitting one batter.

Green, the 15th-seed, improved to 7-9 with the win and advanced to second-seeded Clay for the sectional final on Wednesday night.

Western ends the season with a record of 2-13.

Paul Boggs of the Portsmouth Daily Times contributed to this report.