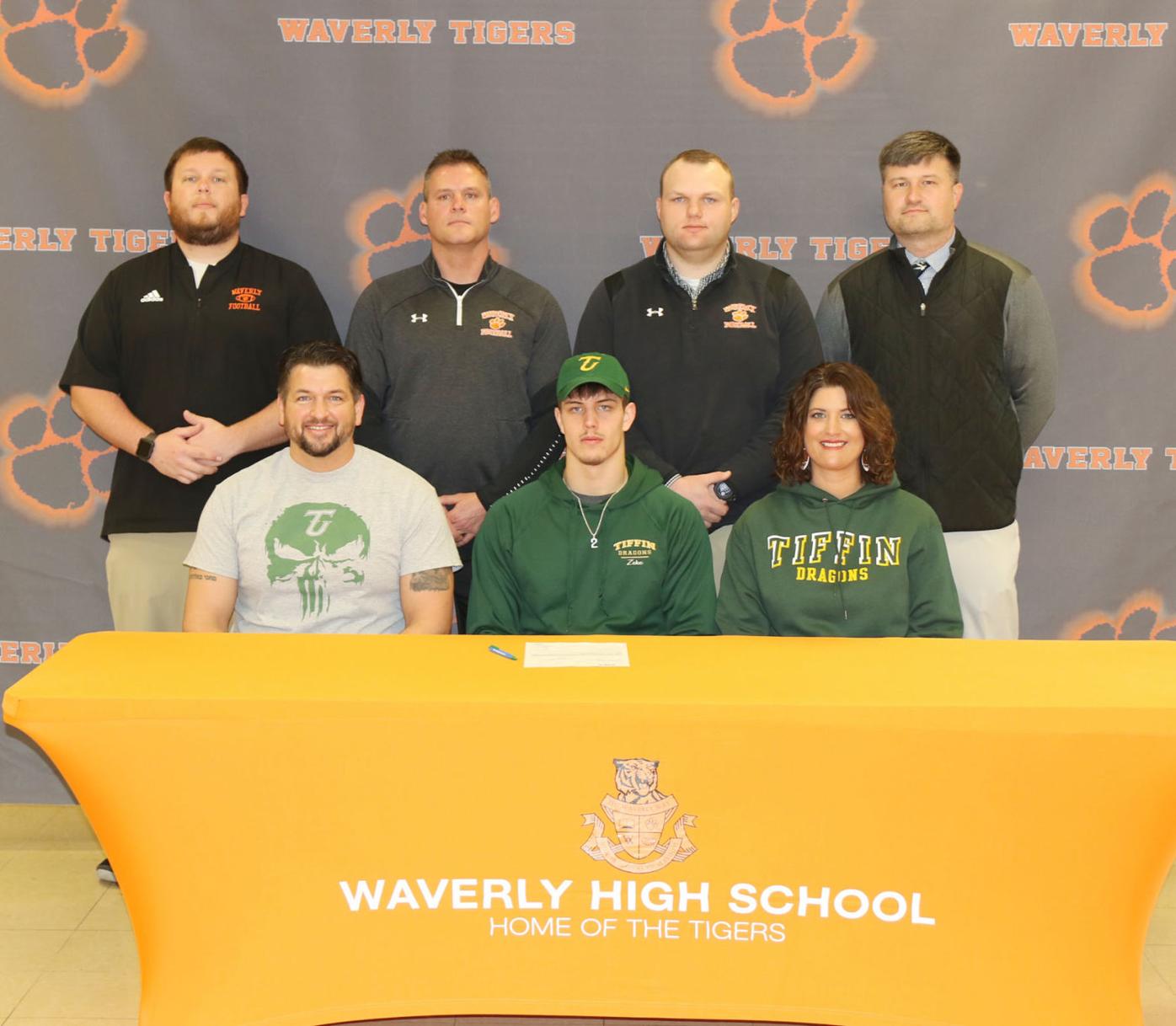 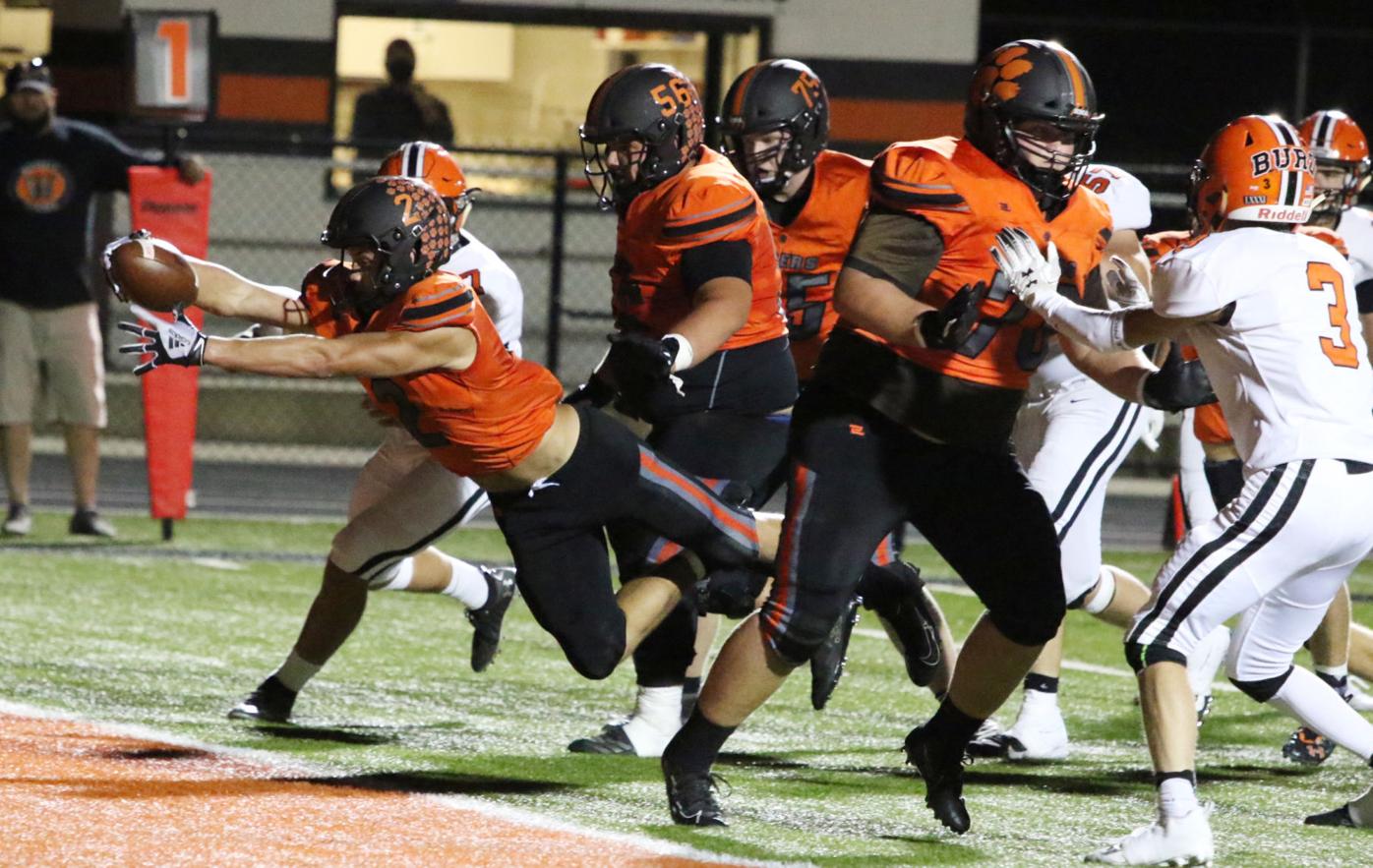 Using a hole created by linemen Andrew Welch, Blaise Reader and Aiden Diehl, Waverly’s Zeke Brown dives into the end zone on one of his two rushing touchdowns in the 36-35 overtime win versus Wheelersburg on Sept. 18. That victory put the Tigers in line to win their first SOC II football title since 2006. 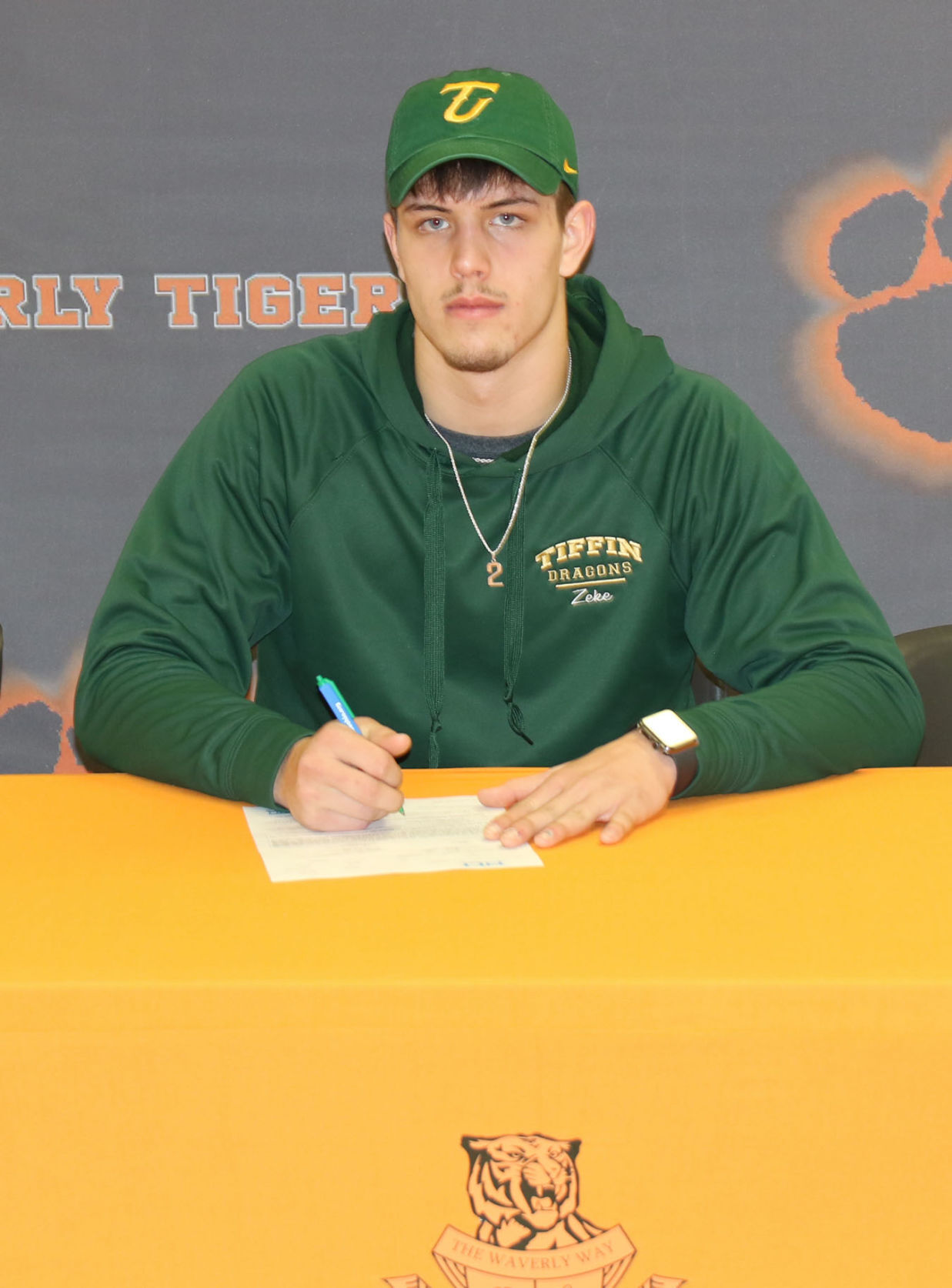 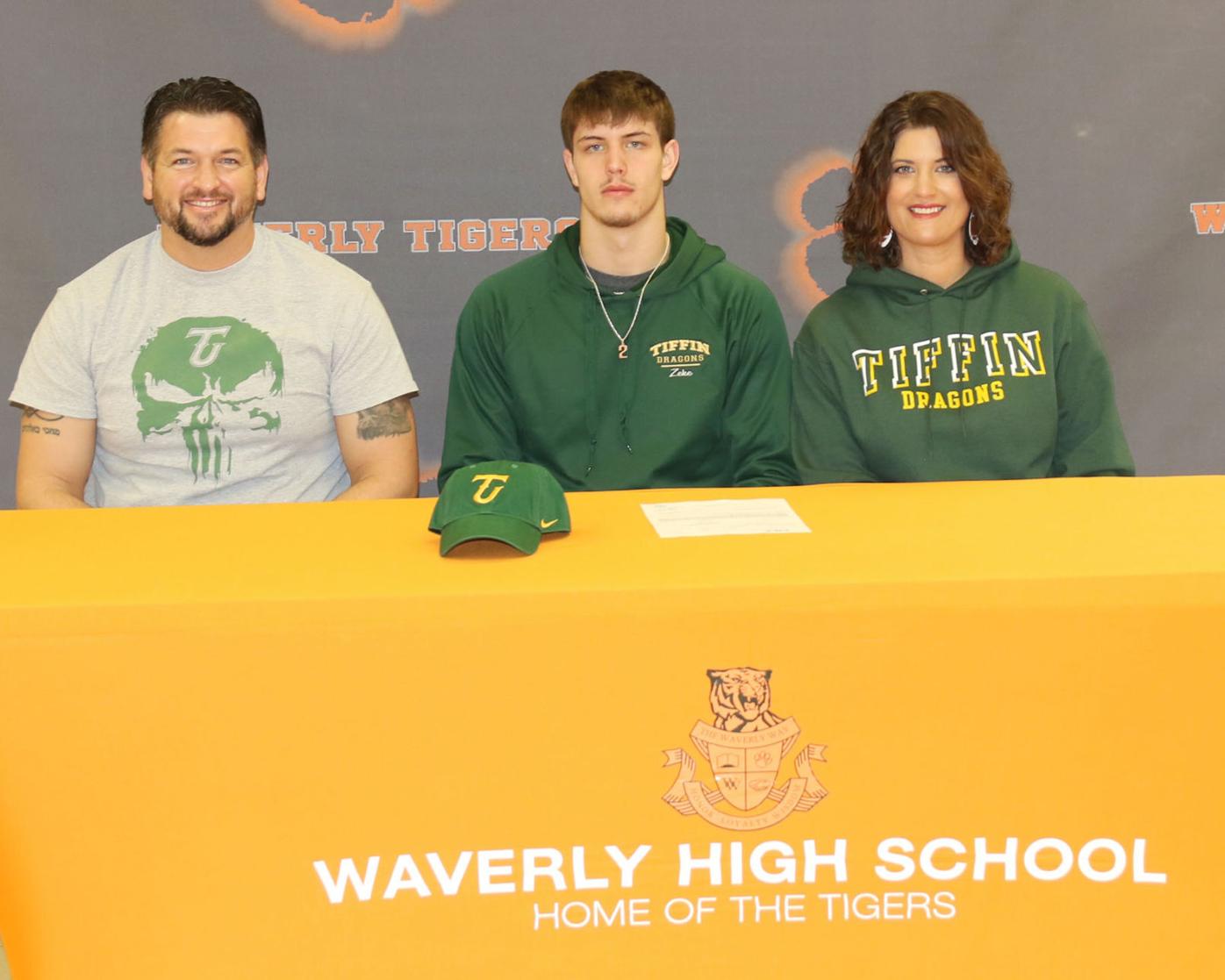 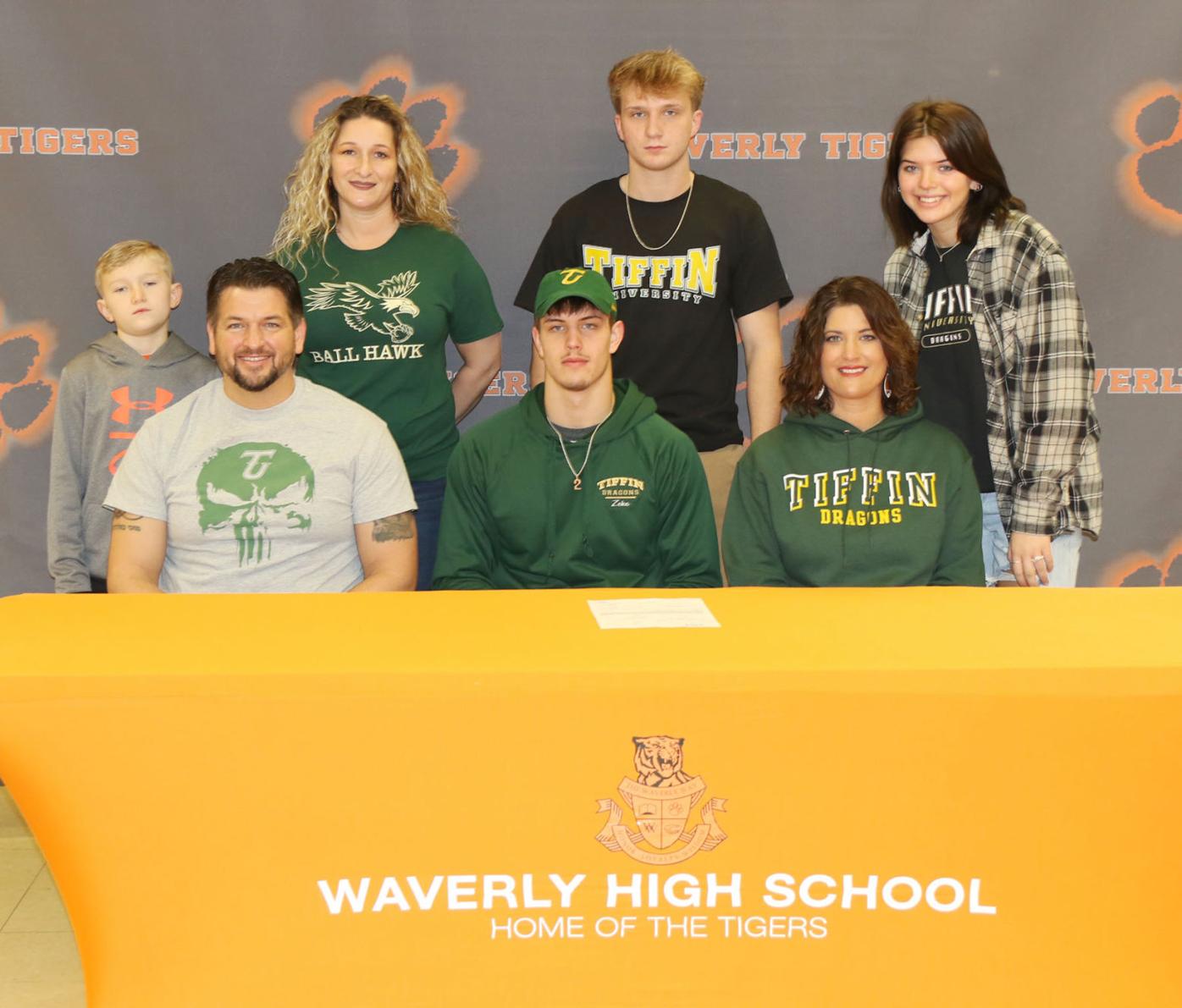 Zeke Brown sits with his parents and siblings on National Signing Day. 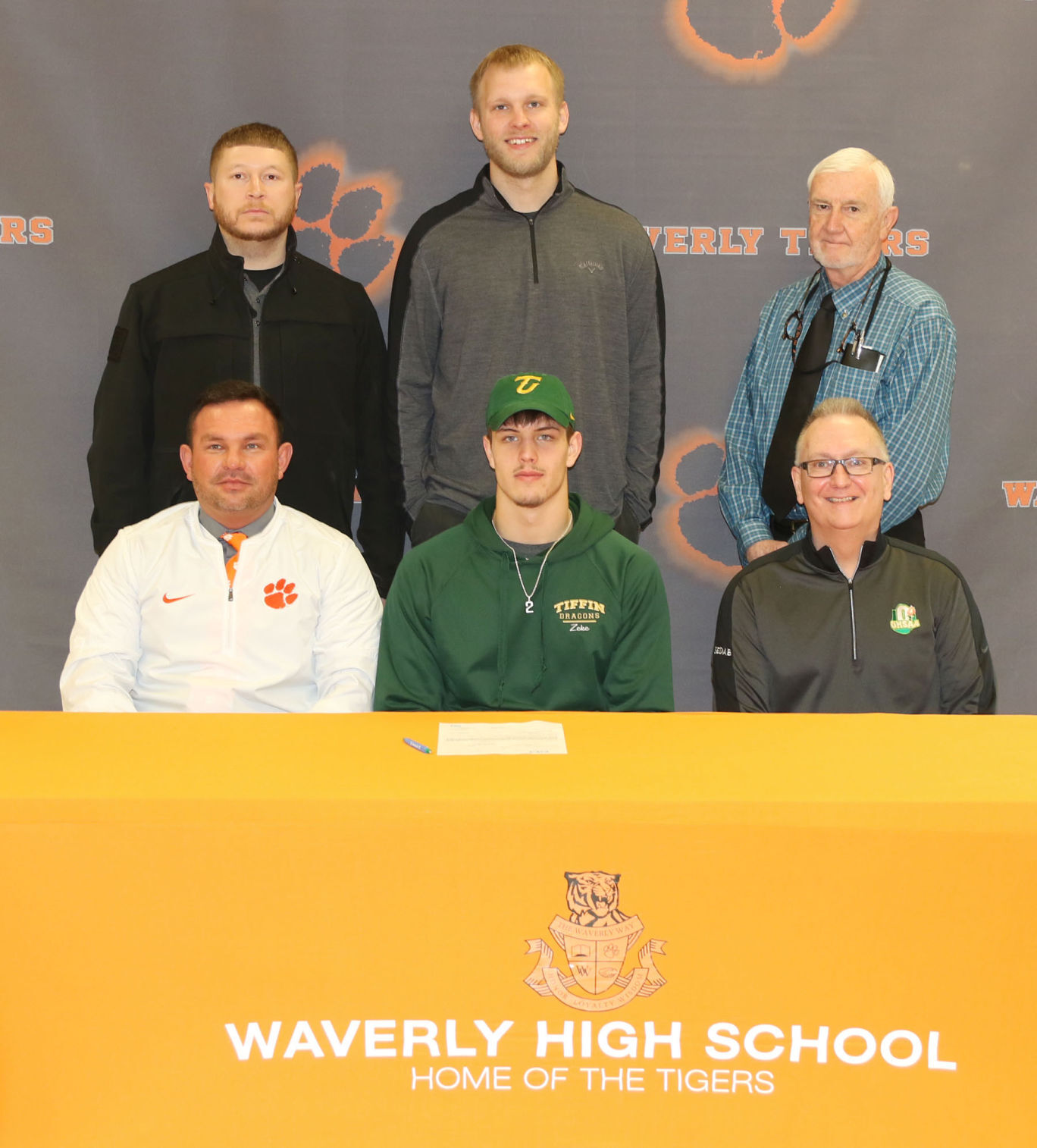 Zeke Brown is seated with the Waverly Basketball Coaches and Athletic Director Bo Arnett after signing with Tiffin University for football. 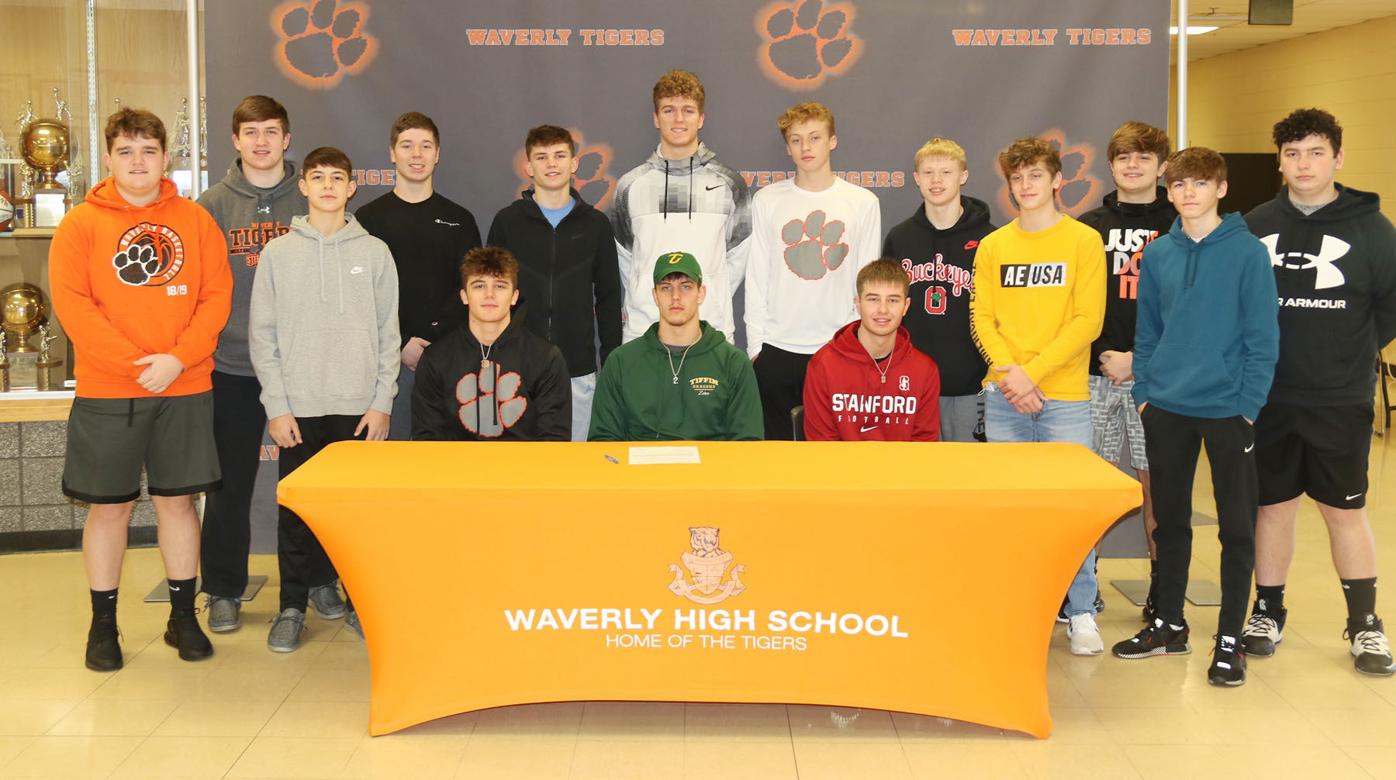 Zeke Brown is surrounded by his Waverly High School basketball teammates during his signing.

Using a hole created by linemen Andrew Welch, Blaise Reader and Aiden Diehl, Waverly’s Zeke Brown dives into the end zone on one of his two rushing touchdowns in the 36-35 overtime win versus Wheelersburg on Sept. 18. That victory put the Tigers in line to win their first SOC II football title since 2006.

Zeke Brown sits with his parents and siblings on National Signing Day.

Zeke Brown is seated with the Waverly Basketball Coaches and Athletic Director Bo Arnett after signing with Tiffin University for football.

Zeke Brown is surrounded by his Waverly High School basketball teammates during his signing.

Zeke Brown, Waverly’s leading tackler from the linebacker position, will be aiming to make an impact in the same way as he joins the Tiffin University Dragons in the fall.

“Playing college football at any level is something you dream of when you are younger,” said Brown. “Then you work for it for four years in high school. Now, signing day is finally here. It is a lot of emotions. There’s a lot of hard work that went into this. I’m very happy.”

“Zeke has been a great leader for us on and off the field,” said Waverly High School Head Football Coach Chris Crabtree. “Zeke has been a hard worker. The first day he came here as a freshman, we knew he had it (exceptional talent to do great things on the field). The hard work and effort he’s put into football the past four years has came into fruition and he’s been able to turn that into a lot of success.

“Even with the crazy year and being out of school in the spring, he took it upon himself to get in the weight room and work hard. You could tell when he came out in the summer that he had put a lot of hard work into football.”

According to a release posted on the Tiffin University Athletics website (gotiffindragons.com), it was a banner recruiting season, as the football program announced 46 signings on 2021 National Signing Day.

Head Coach Cris Reisert and the TU football program will welcome the new players, who bring a wealth of talent to the team. The Dragons won the 2019 GMAC (Great Midwest Athletic Conference) Championship with a 7-0 conference record (9-2 overall) and made their first NCAA Championships appearance in program history. The team also posted back-to-back nine-win seasons for just the second time in program history (2006, 07).

The release also had a comment from Reisert about each player. Regarding Zeke Brown, Reisert said, “Zeke’s a terrific 2 way player who dominated games at LB & TE. He’s a long, rangy LB who can disrupt games on the defensive side of the ball.”

“Zeke plays two of the toughest positions on the field — linebacker and tight end. Being the tight end, he has to know the offense. He has to block and run routes,” said Coach Crabtree.

“As a linebacker, he’s making adjustments and calls on defense. We put a lot on Zeke’s plate and he handled it very well. I’m just so proud of what he was able to accomplish this year. The success he has is all earned. Zeke has played multiple positions for us defensively. We started him as a corner as a freshman, he played some safety and some outside linebacker. At the start of his junior year and senior year, we put him at inside linebacker, which was the best decision we made. That paid off for us having him there.”

The Tiffin University web release about National Signing Day also listed Brown’s reason for choosing the school: “Tiffin separated itself from all other colleges and met all expectations in the classroom, on the field and off the field.”

Brown had more to add about his choice during an interview after the signing was completed.

“Tiffin is a really special place. All of the coaches made me want to buy into what they are doing culturally on the field and off the field,” he said.

“There were several schools, but it was really between Tiffin and Indiana Wesleyan. Phoenix (Wolf) is going to Indiana Wesleyan, and Payton (Shoemaker) is there. That was a big leverage point they had. But Tiffin always felt like home. I never felt out of place when I went there. I talked to a lot of the upperclassmen and they invited me in and welcomed me. It didn’t feel like starting over. I felt like it would be an easy transition.”

At Tiffin, Brown will be solely focused on defense.

“They want me to play linebacker. Maybe as a senior, they might put me at tight end just for fun,” said Brown. “It will be weird playing one side of the ball, but I think it will give me a lot of time to focus on it and get better at it.”

At Waverly this past season, Brown led the defensive honors, securing All-Southern Ohio Conference Division II Defensive Player of the Year, Ohio Prep Sports Writers (OPSWA) Southeast District Division IV Defensive Player of the Year, and OPSWA First Team All-Ohio Division IV. This was the third straight year Brown was honored by the SOC II, the second straight year for Southeast District recognition, and he was Special Mention All-Ohio as a junior.

Brown, listed as a 6-foot, 3-inch, 215-pound linebacker/tight end on the Waverly football roster, made his presence known on the field. For the Tigers in 2020, he was the top tackler on the team with 54 solo tackles and 14 assists. He also had three tackles for loss with a combined yardage of 11. Additionally, Brown had a 60-yard interception return for a touchdown in the opener versus Granville. He broke up four passes, forced a fumble and blocked a kick.

On offense as a tight end, Brown had 31 receptions for 394 yards and seven touchdowns. When he wasn’t catching passes, he was blocking. Additionally, he served as a short-yardage back on the goal line, having four carries for nine yards and three touchdowns. Two of those touchdowns came in the win over the Wheelersburg Pirates which clinched the first SOC II football title since 2006.

“This (Waverly football) program has excelled a lot in the last four years. In unprecedented times like my senior year (COVID-19), we were still able to do what we did, which is special. I’m happy with the way we went out,” said Brown. “We wanted to go farther, but I’m happy with what we accomplished.”

“It was definitely a unique situation. As I’ve had some time to reflect, I’m thrilled we got to play the games we did,” said Coach Crabtree, talking of the fall that the Tigers had. “These guys handled it well and went to work every week. Zeke was a big part of that — getting everyone to do what they were supposed to do. We wanted to win a league title and make a run in the playoffs. We were able to do that. We just came up a little bit short against Clinton-Massie. These guys (the senior class) have done some great things over the course of their career.”

Brown plans to work hard when he arrives on campus in the fall, just like he did at Waverly, to be the best player he can be for the Dragons.

“I expect to be competitive on the practice field. I don’t expect to get a whole lot of time coming in, but I want to work for it and hopefully be active in the lineup when I get to my sophomore year,” said Brown.

“Zeke is a great guy and a good role model for our younger players. He set a standard of hard work for everyone else to follow,” said Coach Crabtree.

“He’s worked hard to get stronger, but once I think he gets in a college program, he will develop that much more. The sky is the limit for Zeke. He has a lot more potential as he goes through his college years.”