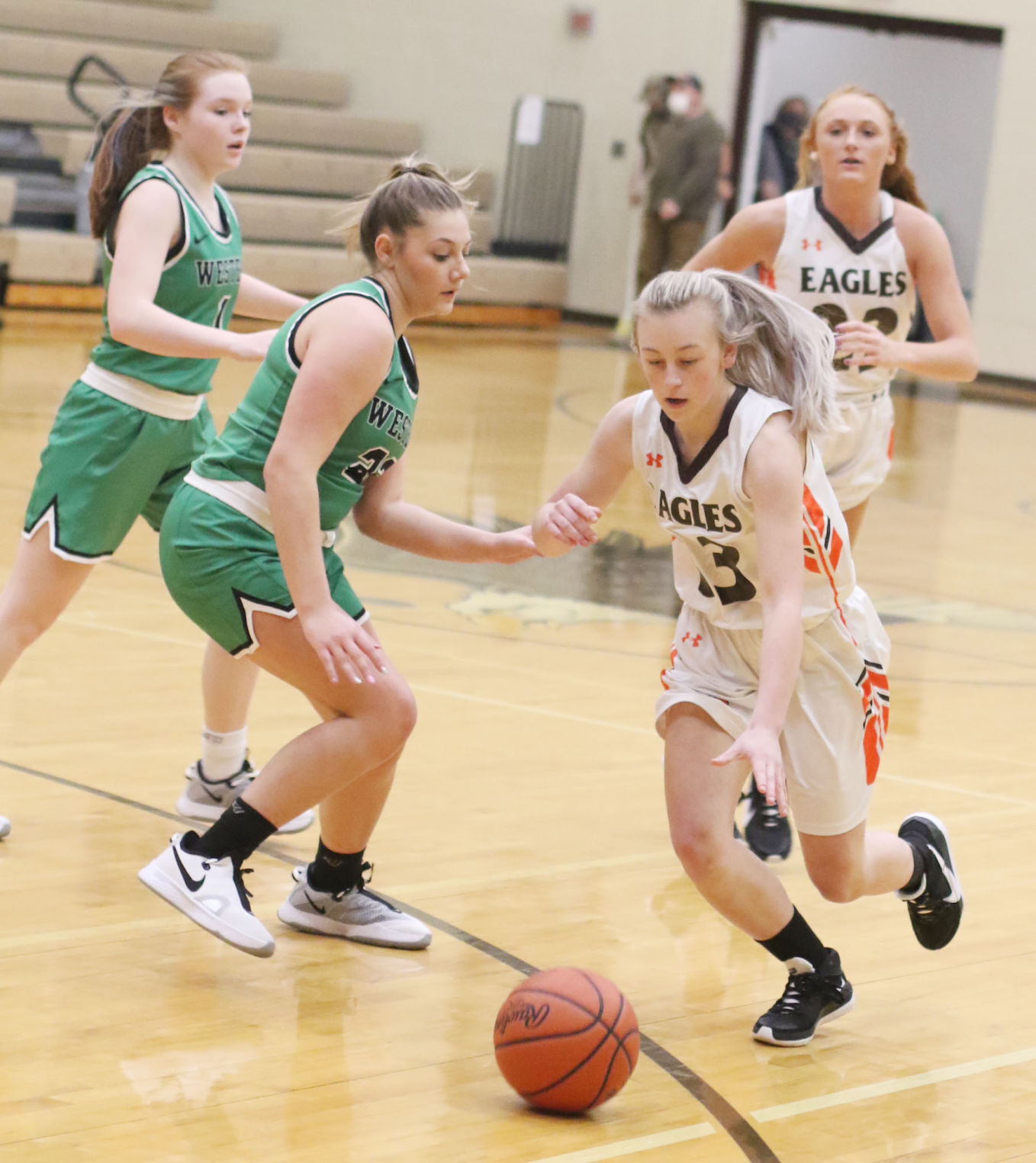 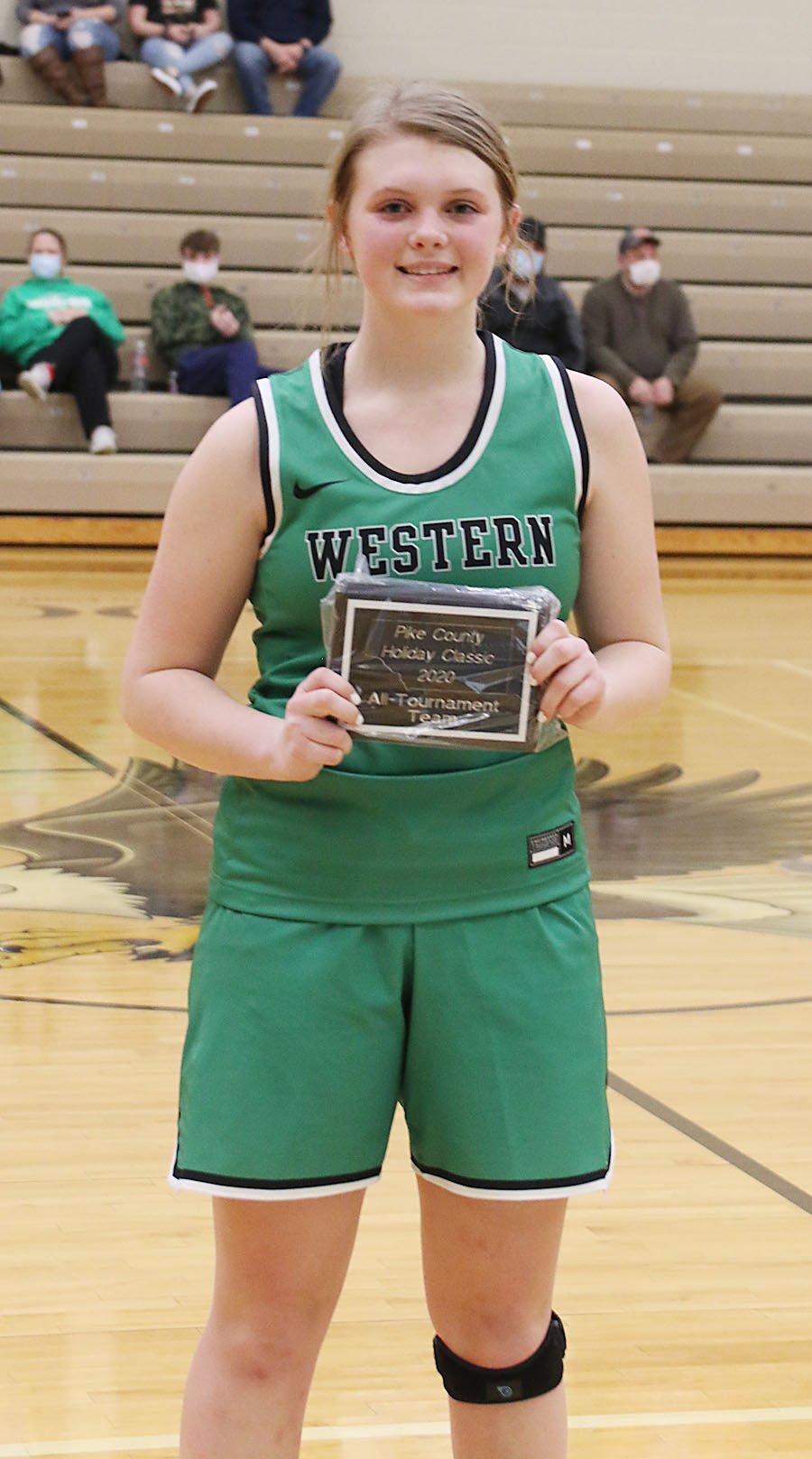 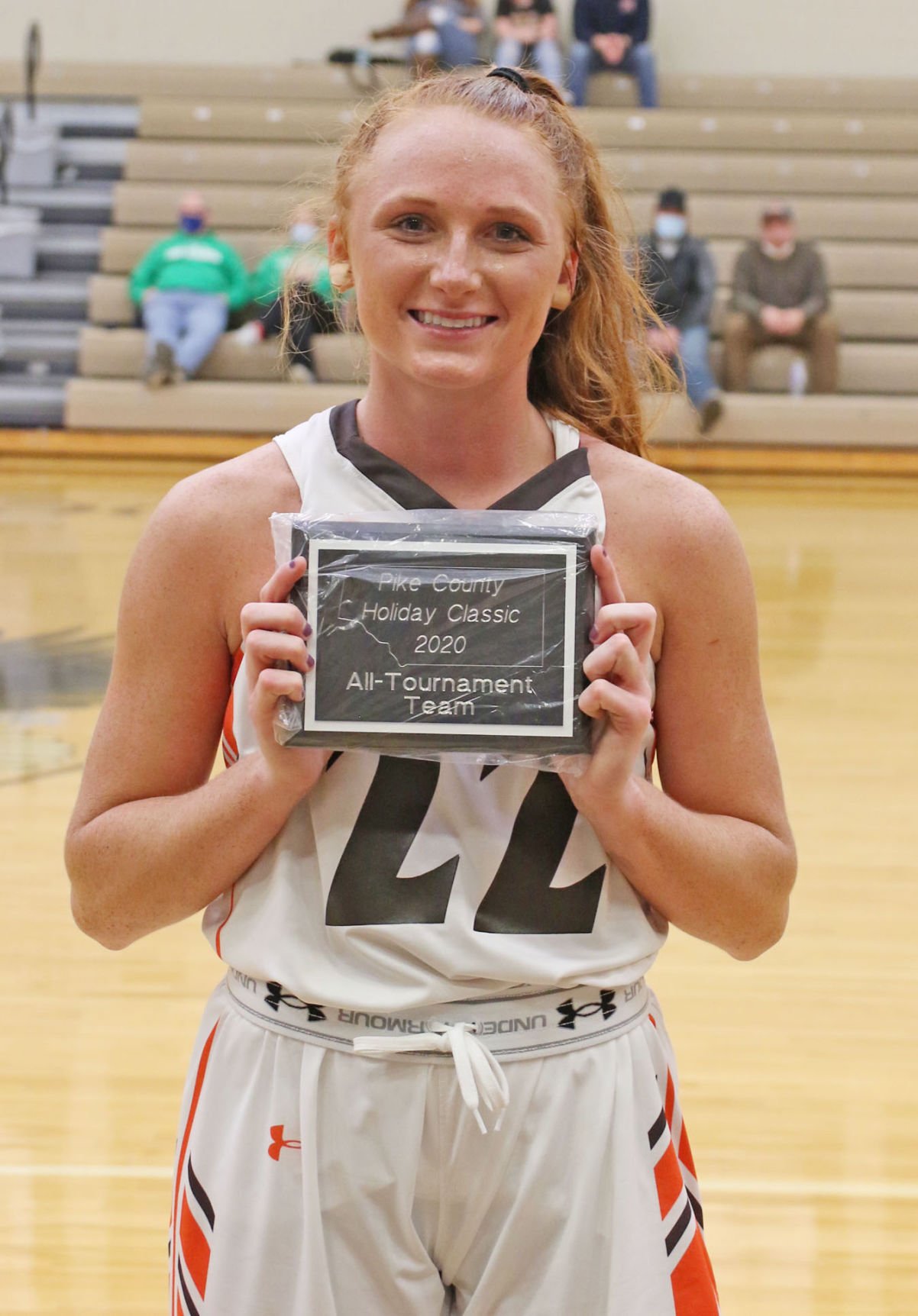 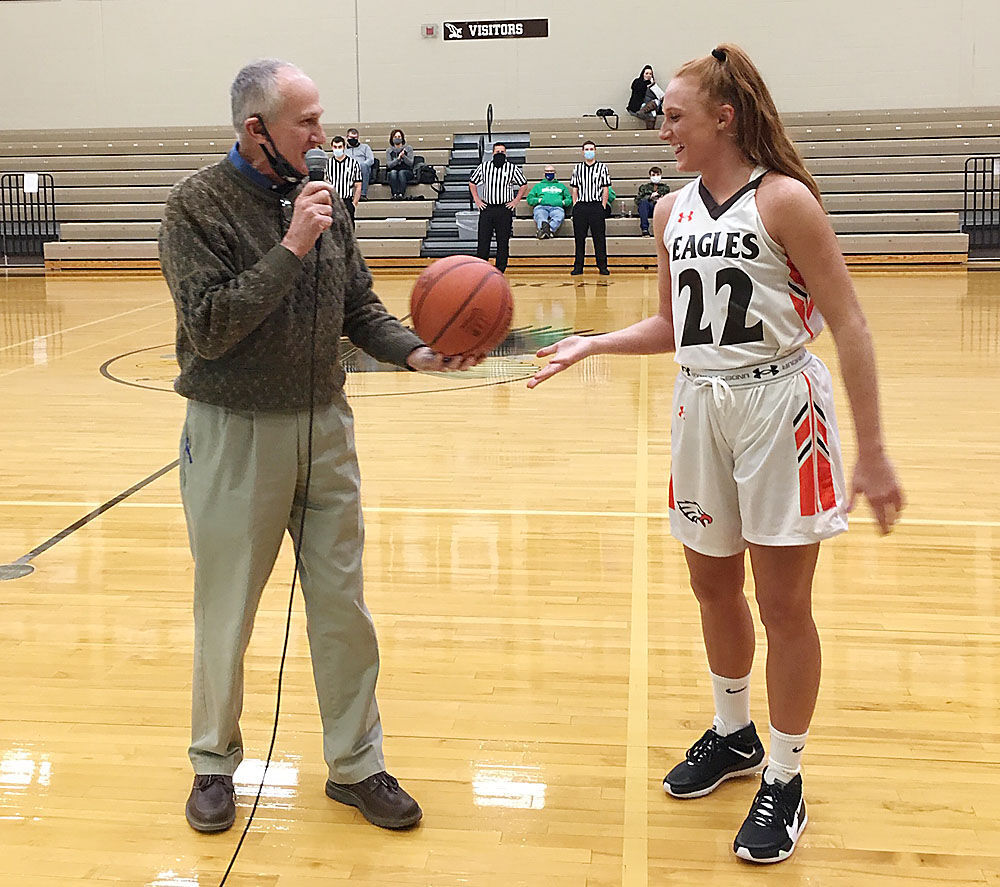 Prior to the Pike County Holiday Classic consolation game, Eastern coach Rick Bowman honored Abby Cochenour by recognizing her in front of the home crowd for scoring her 1,000th career point on Dec. 19 at Piketon. 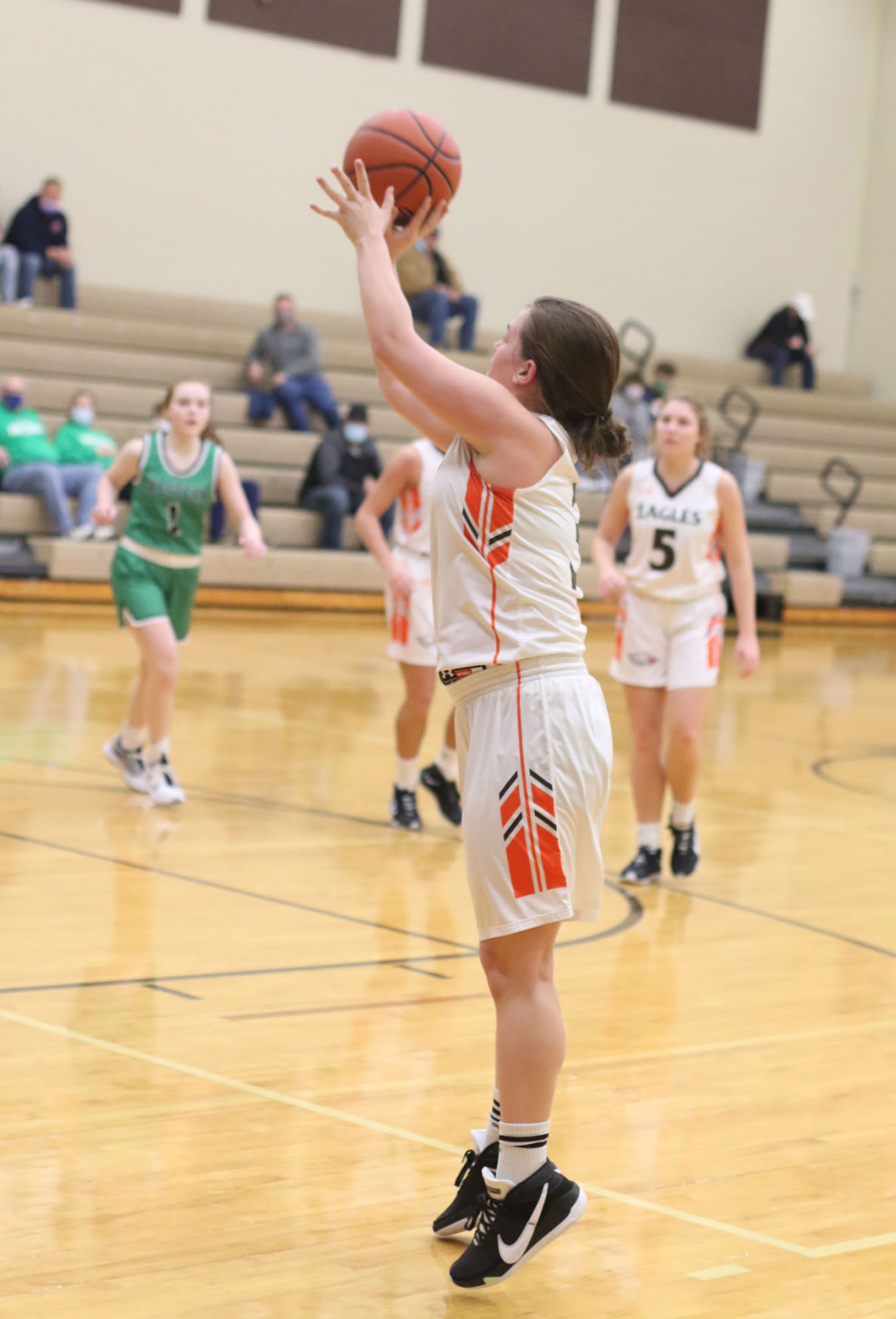 Eastern senior Skylar White pulls up for an open shot. 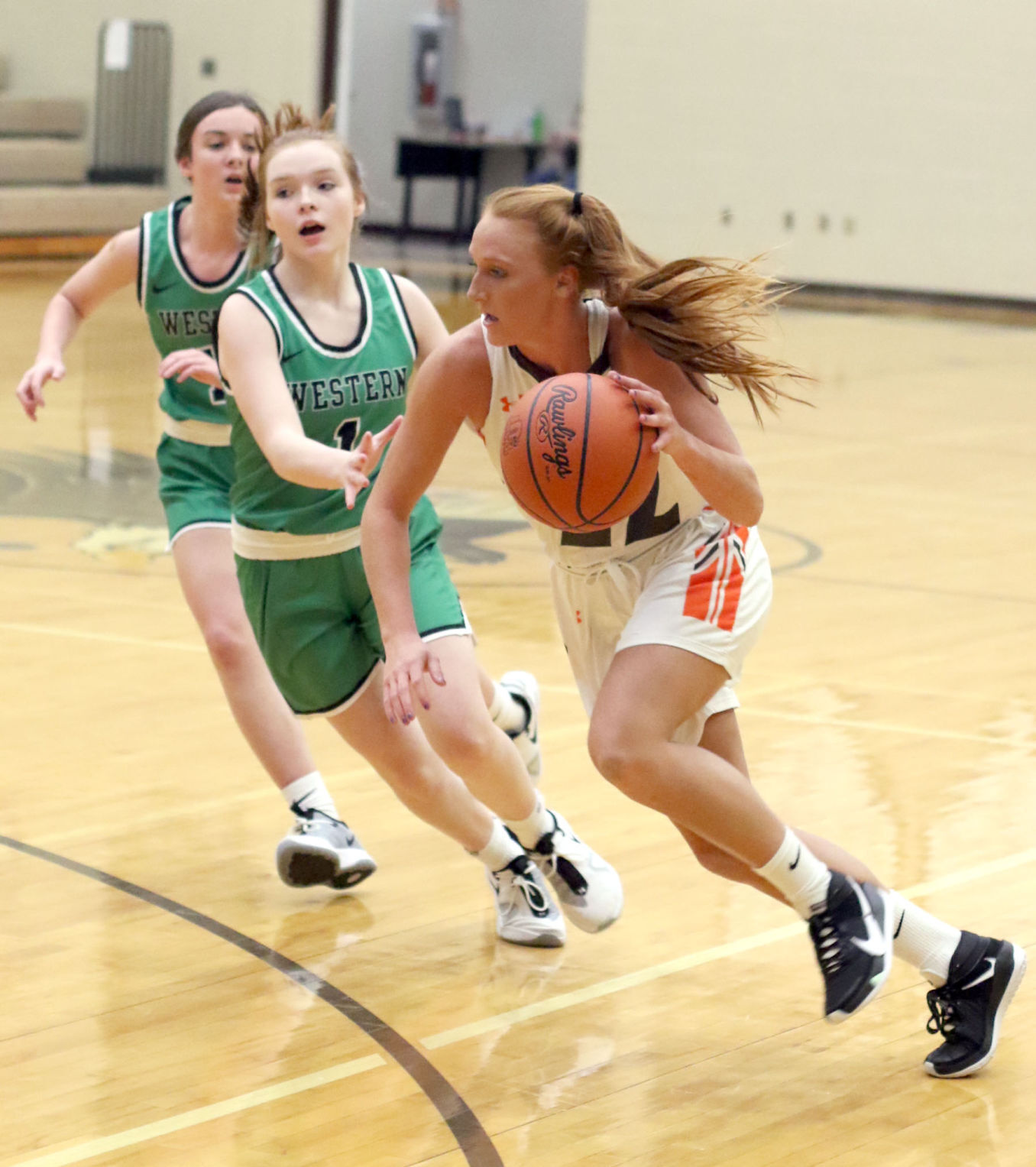 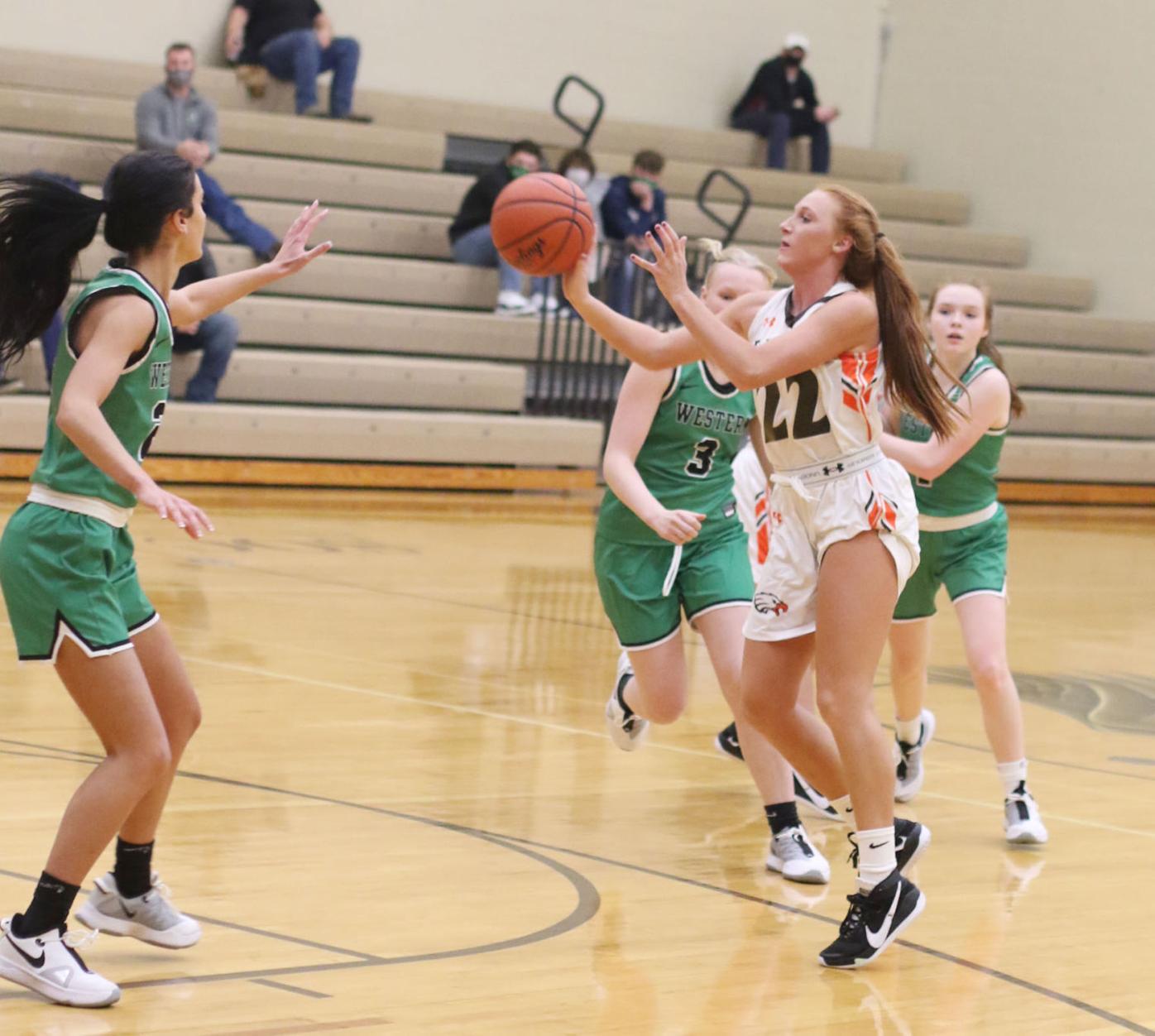 Prior to the Pike County Holiday Classic consolation game, Eastern coach Rick Bowman honored Abby Cochenour by recognizing her in front of the home crowd for scoring her 1,000th career point on Dec. 19 at Piketon.

Eastern senior Skylar White pulls up for an open shot.

Continuing the competitive theme of the first two games of the Pike County Holiday Classic basketball tournament, Monday evening started with another close battle in the consolation game featuring Eastern and Western.

The contest was close until the final quarter when the Lady Eagles took flight, outscoring the Lady Indians 17-8 to take a 59-46 win. It took a team effort from Eastern to do it.

Despite the fact that she has already crossed the 1,000-point milestone early in her junior year, Eastern’s Abby Cochenour can’t carry the scoring load alone. With Western constantly double-teaming Abby Cochenour, that opened the door for teammates to step into scoring roles.

The fourth quarter surge was started by a three-pointer from Abby Cochenour. But the rest of the scoring came from Abby’s sister, Addison, and sophomore Kelsey Helphenstine. It was Helphenstine who really took off in that final stretch, connecting on 4-of-5 from the field, including a pair of three-pointers to account for 10 of the 17 points.

“We have gotten to the point where we had players willing to take shots. They are always looking for Abby, and that’s understandable,” said Eastern coach Rick Bowman. “But for us to be successful, we have to have other people step up. If they (other teams) are going to put two on Abby, then we have four against three, so we have to have open people shooting. It worked well for us tonight.”

Eastern produced the first points in the game when Addison Cochenour took advantage of a wide open shot on the first possession. Western’s Alyssa Marhoover tied the game with an inside shot before Addison Cochenour connected from long range to give her team the lead. Abby Cochenour followed with a free throw to make Eastern’s advantage 6-2. That four point differential remained, 15-11, at the end of the quarter. For Eastern, Kelsey Helphenstine and Andee Lester had both jumped into the scoring action, while Kenzi Ferneau and Alicia Francis produced points for Western.

The Lady Indians continued to fight in the second quarter, tying Eastern twice and briefly taking the lead. The first tie came at 20-20 after Western hit three straight trifectas, having two from Ferneau and one from Francis. Eastern’s points during that stretch came from Lester and Abby Cochenour. Lester had the shot to put Eastern in front again, 22-20, at the midpoint of the quarter.

Nearly two minutes ran off before either team could score again. Then Francis broke through for Western with a drive and followed with another fast break off a turnover to give the Lady Indians the lead, 24-22.

Eastern regained the advantage when senior Skylar White fought for an offensive rebound, was fouled on a putback bucket, and connected on the ensuing free throw, 25-24. Then freshman Megan Nickell extended the lead to three by drawing a foul and hitting both of her shots. Western senior Brooklyn Tackett hit to trim the lead to one, and Chloe Beekman added the next shot to put Western ahead 28-27. But Abby Cochenour had the final shot, giving the Lady Eagles a 29-28 advantage at the half.

The two teams traded leads for the first part of the third quarter. Marhoover started the scoring for Western before Addison Cochenour hit for Eastern. Then Ferneau connected from long range, giving the Lady Indians a 33-31 edge before Abby Cochenour tied it at 33-33. The teams tied again at 34-34 and 36-36. Then Eastern moved in front on back-to-back baskets from Helphenstine and White. The Lady Eagles never trailed again. At the end of the third quarter, Eastern was holding a 42-38 lead.

The fourth quarter began with a trifecta from Abby Cochenour. That shot was followed by a basket from Helphenstine, opening a nine-point advantage, 47-38. A free throw from Western’s Brooklyn Tackett, followed by a trifecta from Kenzi Ferneau, trimmed the lead back to five, 47-42. Addison Cochenour hit, and then hit again after a basket from Francis, pushing the lead to seven, 51-44. Then Helphenstine scored the next eight points with back-to-back there-pointers, followed by a bucket. At that point, Eastern was up 59-44. Two free throws from Tackett in the final minute ended the scoring at 59-46.

“When Western came in here Saturday and played Waverly as tough as they did, I knew we would have our work cut out for us,” said Bowman of his Lady Eagles facing the Lady Indians.

“Our kids stepped up. I thought late in the game, we really guarded and made them work for shots. We told the girls at the beginning of the game to not let them have anything easy. Western still made some shots, but we made them work. We still have a lot of season left. If we can take this and build on it, then we can get some victories. We still have our work cut out for us. We have to play the big schools and that’s not easy.”

For the first time all season, the Lady Eagles had three players achieve double figure scoring. Abby Cochenour, Eastern’s Holiday Classic All-Tournament Team selection, led with 17 points, followed by Helphenstine with 16 points. Addison Cochenour produced a double-double with 13 points and 16 rebounds to go along with two assists and two steals.

“Addison hit that open shot to start the game, and that really made me feel good. We couldn’t get her many looks after that. But then she got some late in the game, and she made them,” said Bowman.

“We tried to make an adjustment in the second quarter because Kelsey (Helphenstine) had taken some shots and didn’t make anything on the right wing. So I tried to get Addison out there (on the wing) and brought Skylar up, but we couldn’t get the ball to Addison. Western was putting someone there. They continued to leave Kelsey open. In the second half, Kelsey hit the shots. It was good for her confidence, which she needed. All of the girls need to develop some confidence in their shooting. I’m thrilled for them. It has been a tough beginning of the season, and we’ve played a tough schedule.”

Western was led by Ferneau with 17 points and Francis with 13 points. Marhoover secured 11 of her team’s 25 rebounds to lead the way in that category, while providing five points.

“Alyssa has gotten so much better from last year to this year,” said Western coach Mike Jordan of Marhoover, who was named to the Pike County Holiday Classic All-Tournament Team. “She really worked on her offensive game over the summer and during the time out of school.”

“We were trying to force them to have other players (besides Abby Cochenour) take shots,” said Jordan. “But Abby (Cochenour) did a good job of getting open, because she’s such a good athlete. The theme for our Holiday Classic tournament is turnovers. We’re averaging 27 turnovers a game. It is hard to win when you turn the ball over that much. But girls are getting better all of the time, and we are ahead of where we were this time last year.”