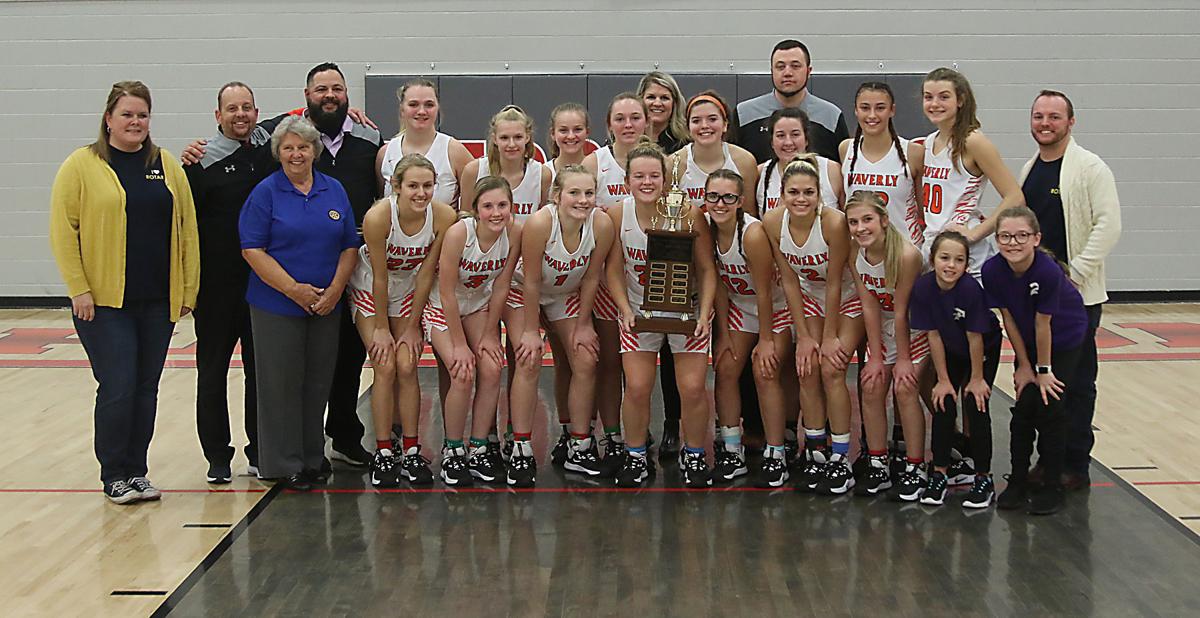 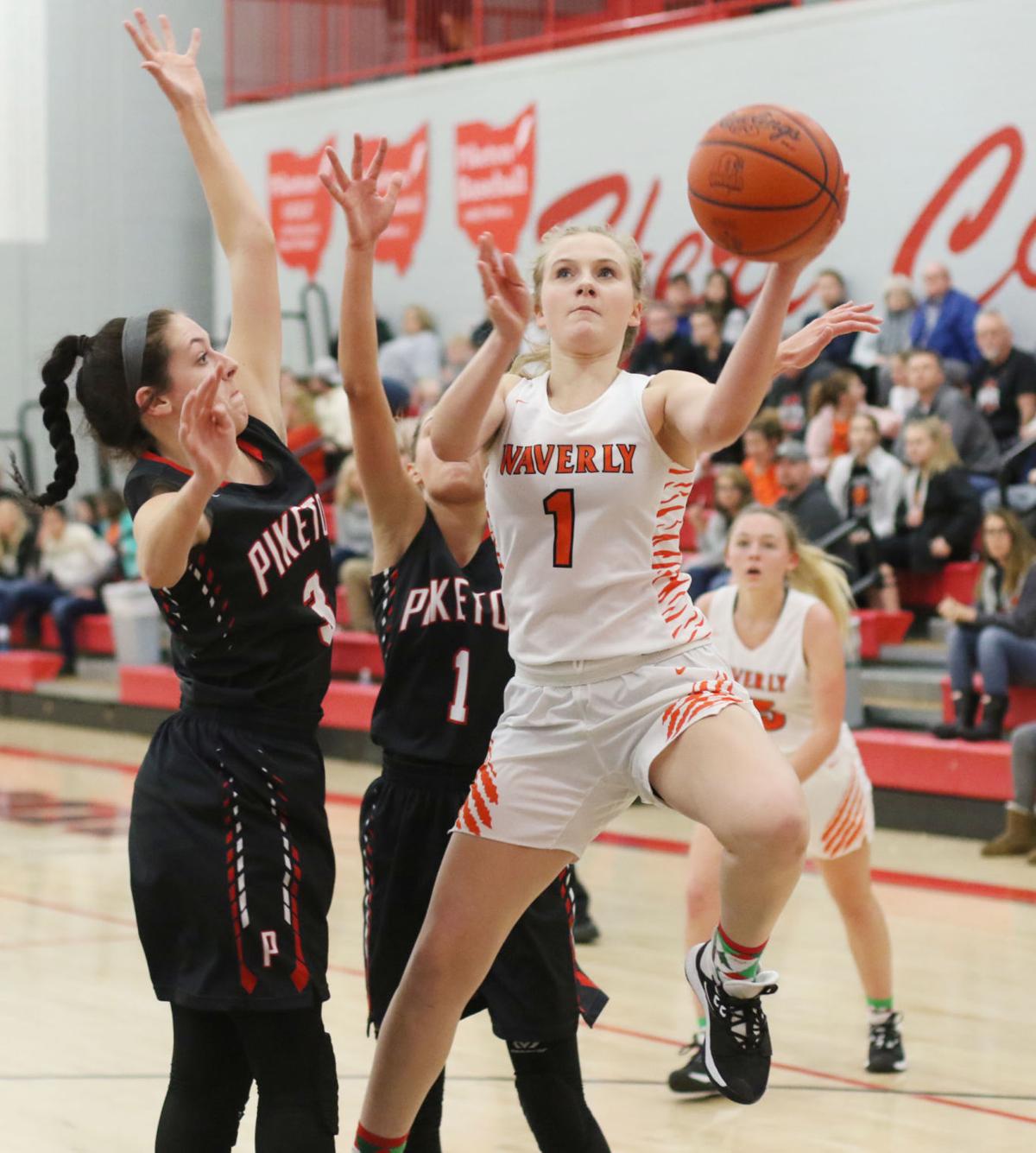 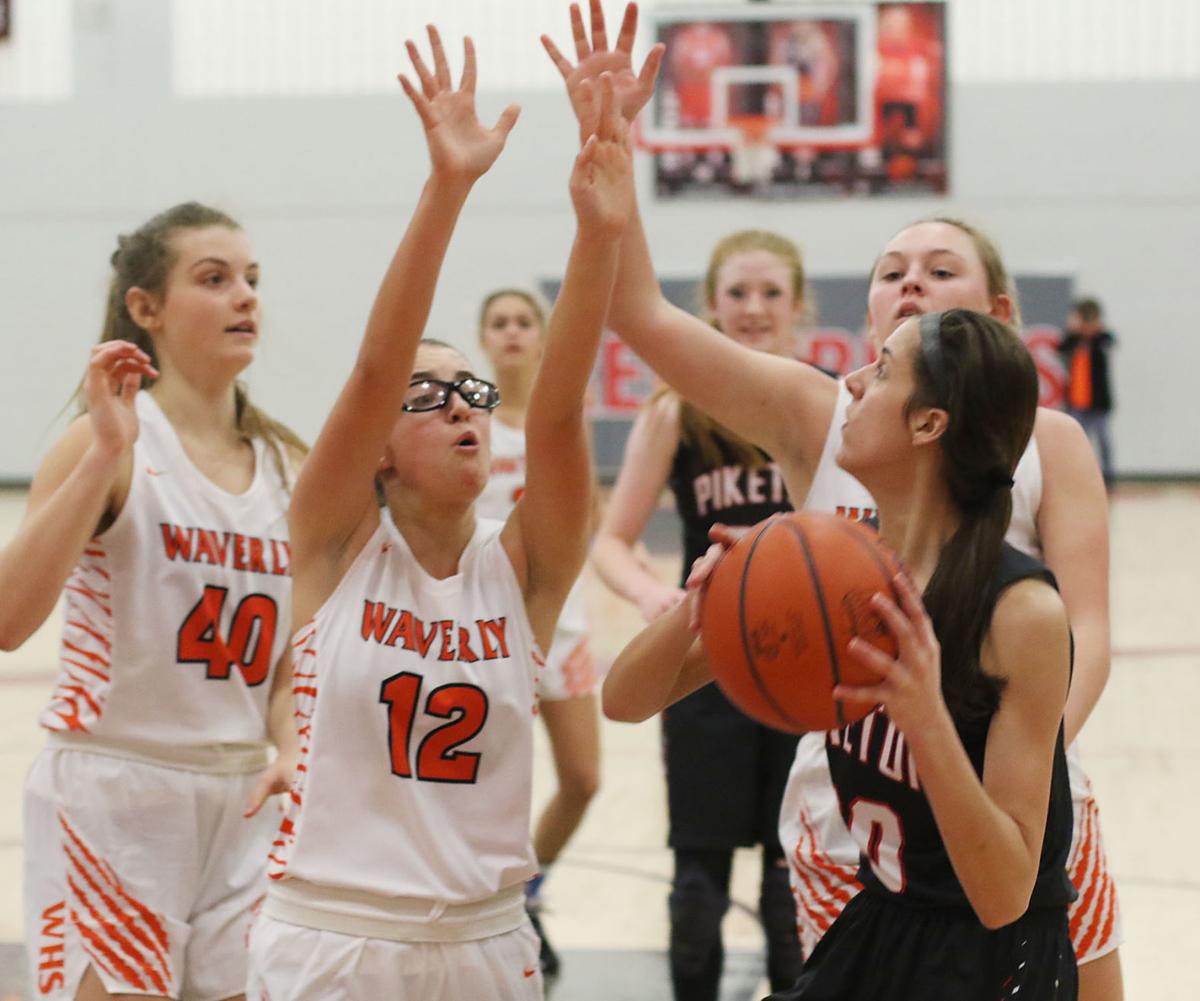 Piketon's Kennedy Jenkins looks for an opportunity to score while being surrounded by Waverly defenders Sarah Thompson, Michaela Rhoads and Paige Carter. 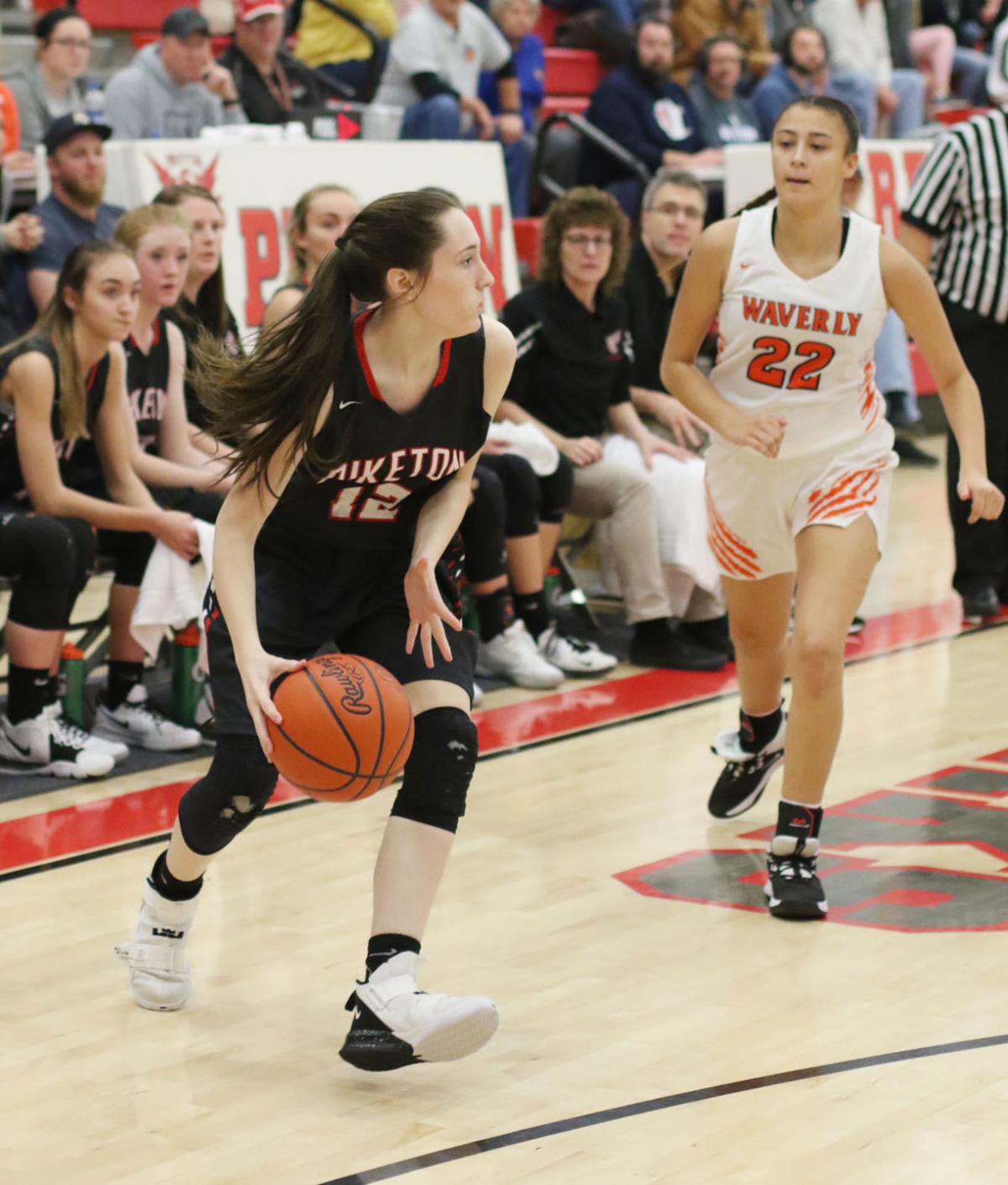 Piketon's Savannah McNelly looks to pass the ball to a teammate as Waverly's Raelynn Dale closes in on her. 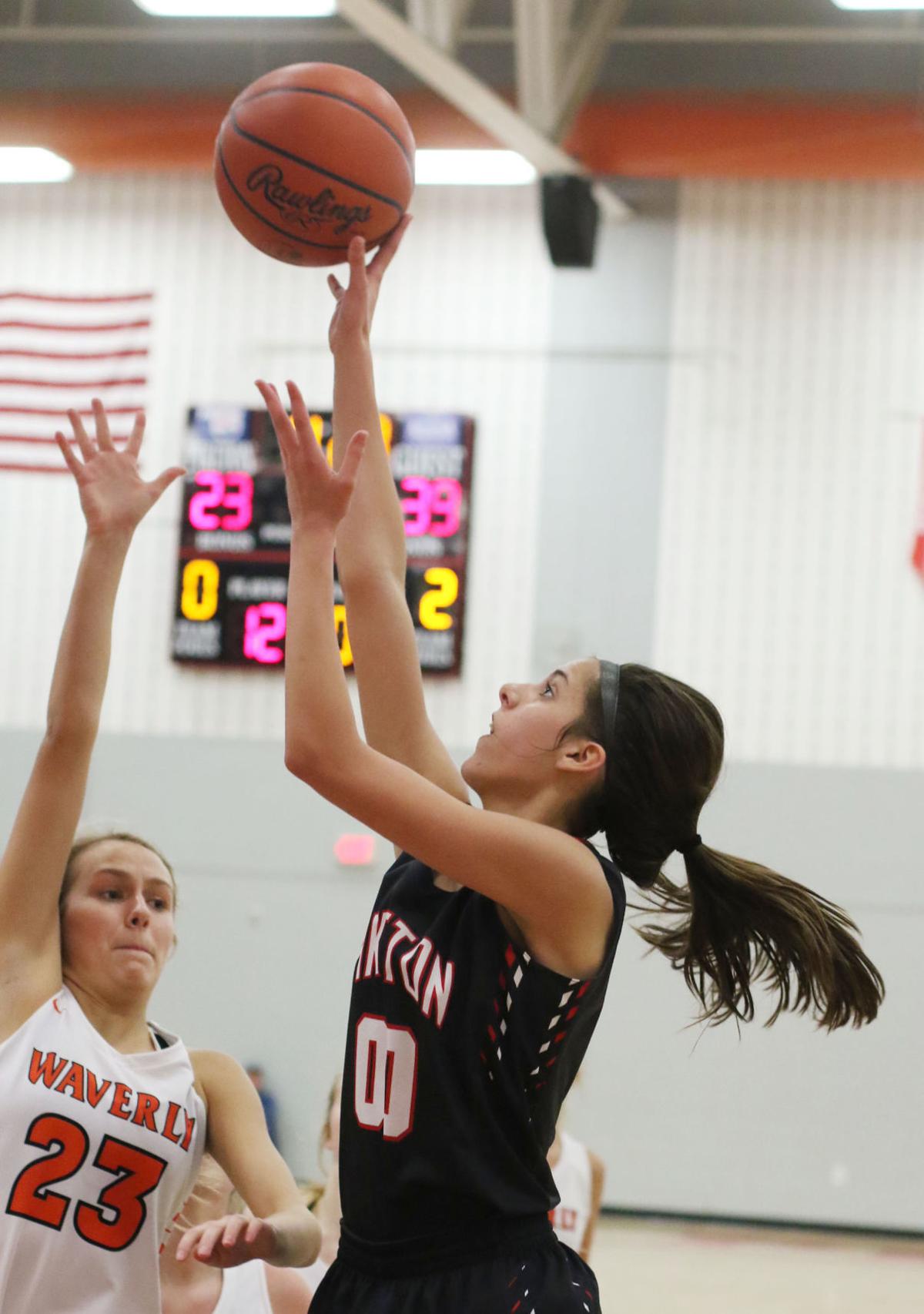 Piketon's Kennedy Jenkins uses her height to score on a drive with Waverly's Delaney Tackett defending. 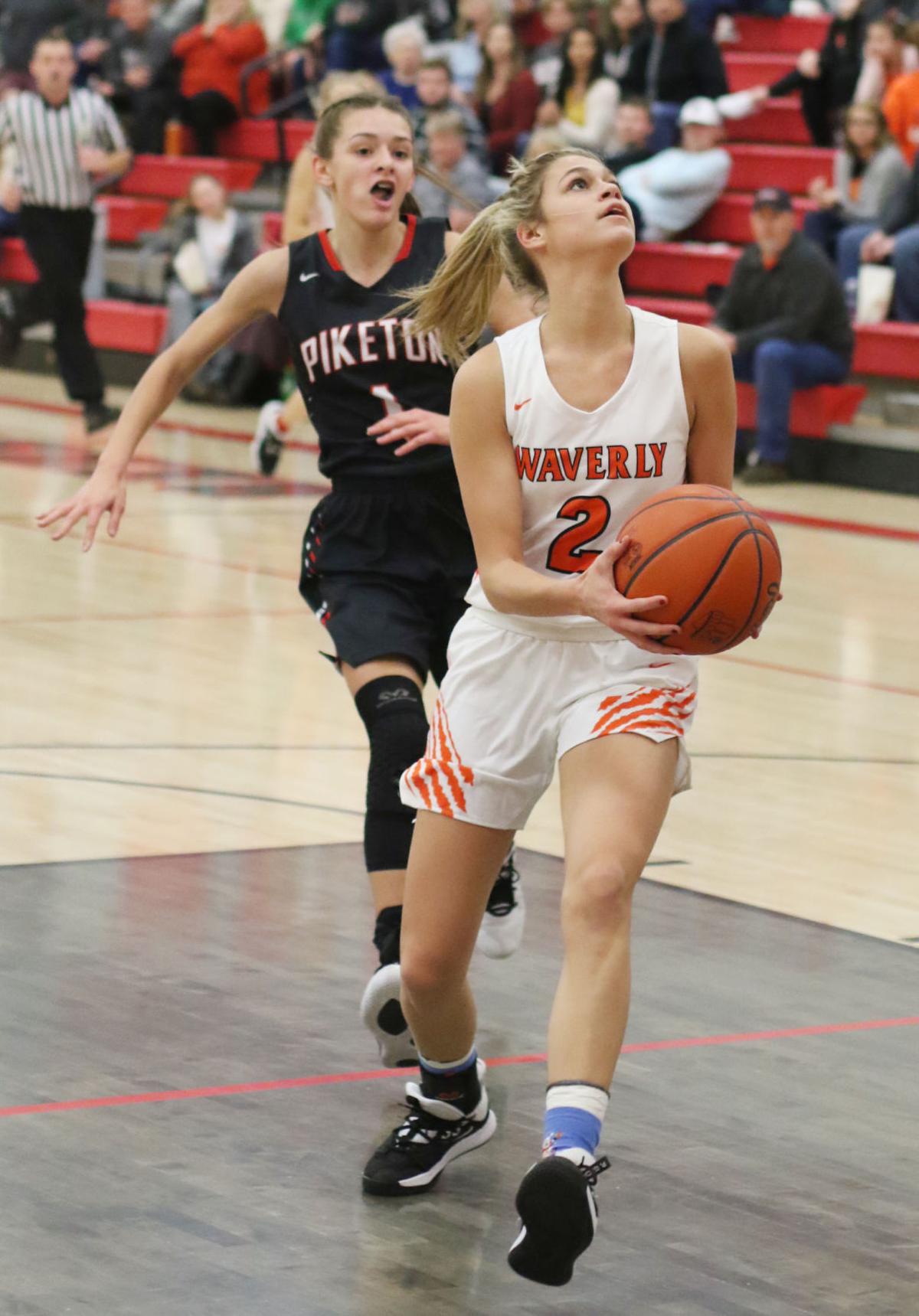 Waverly's Carli Knight looks up at the basket as she prepares to score on a layup with Piketon's Jazzlyn Lamerson chasing her. 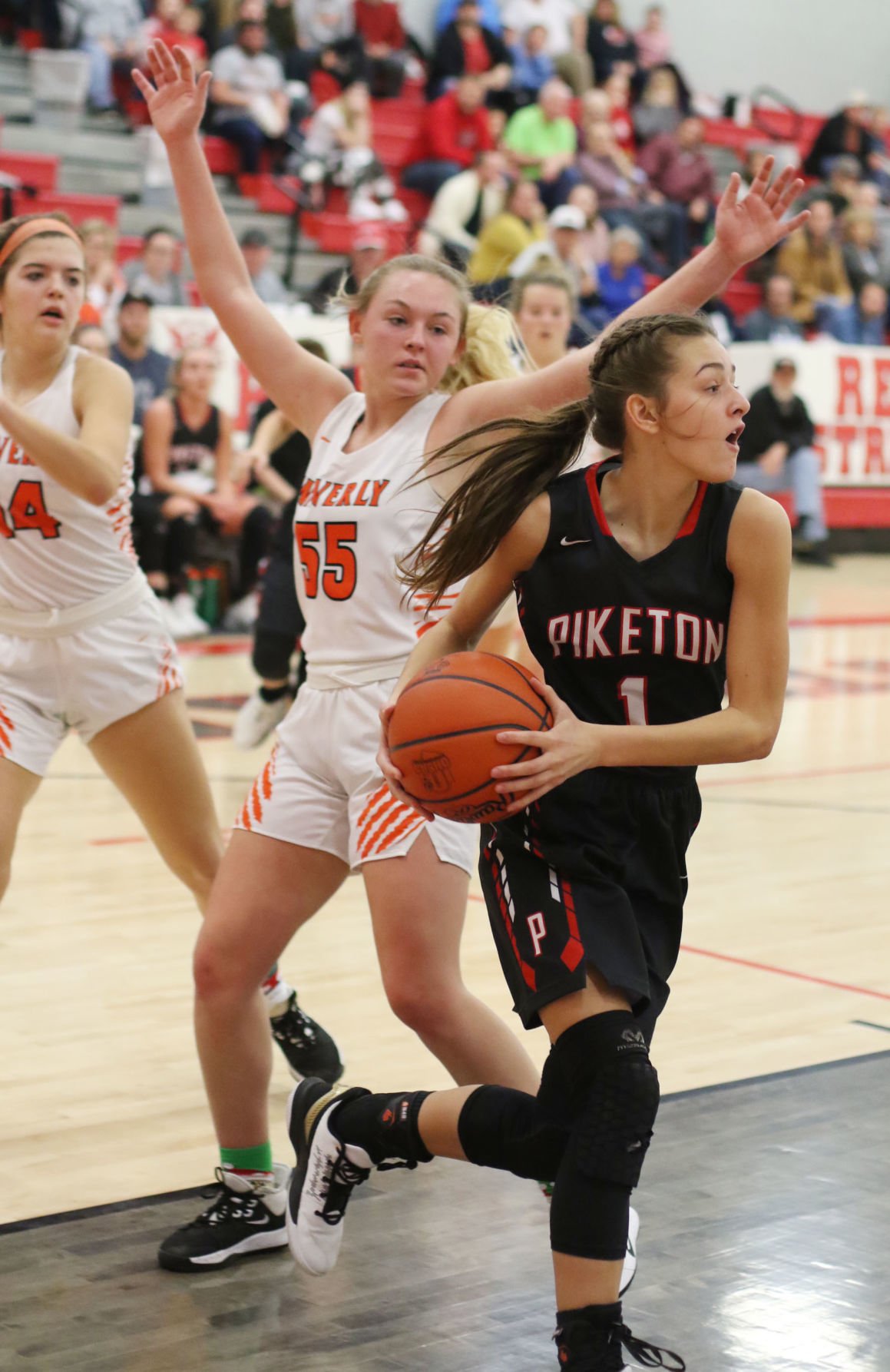 Getting by Waverly defenders Lydia Brown and Paige Carter, Piketon's Jazzlyn Lamerson drives across the paint and looks to pass or score on a reverse layup. 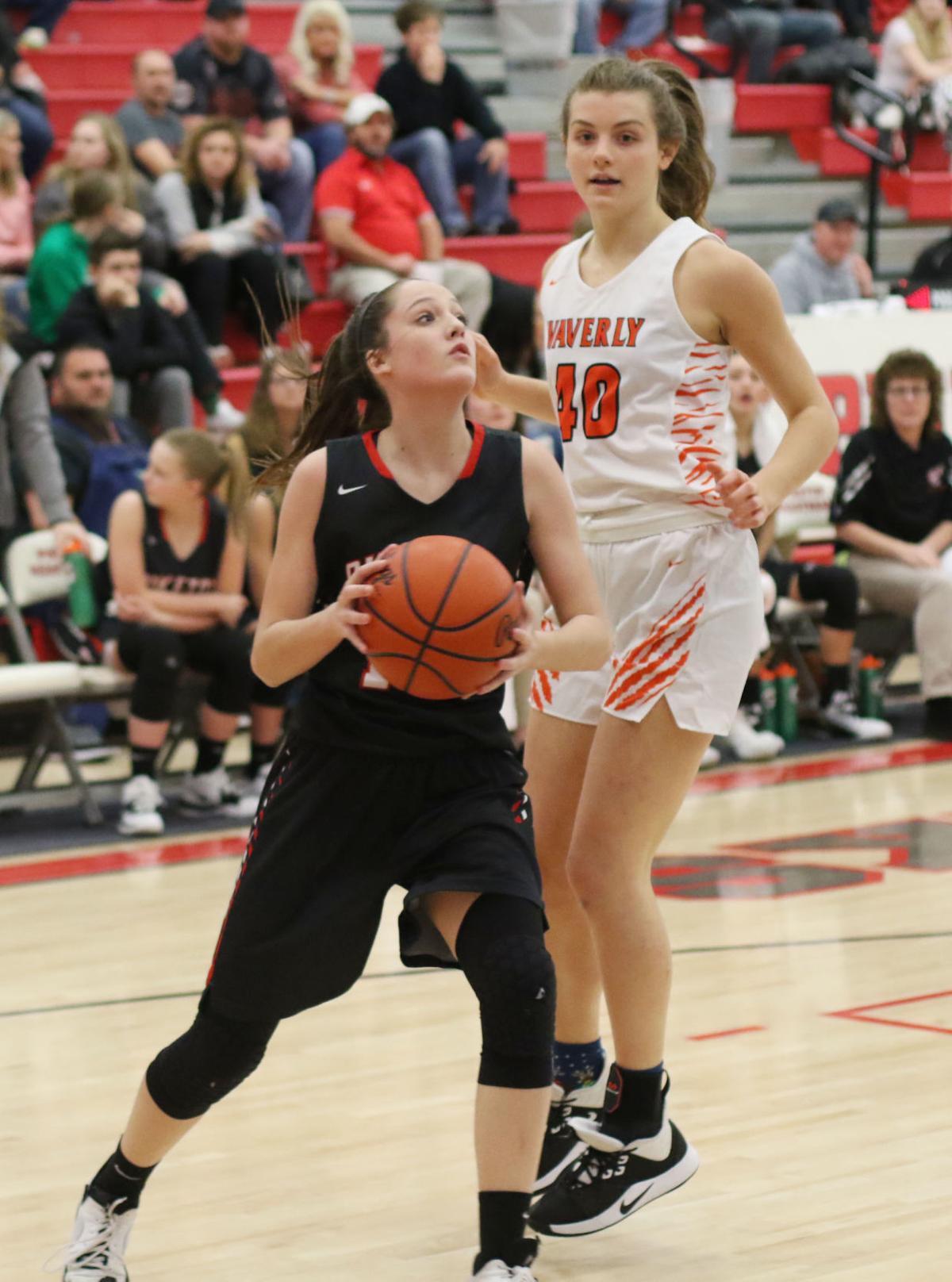 Working to get around Waverly defender Sarah Thompson, Piketon's Bailey Vulgamore looks toward the basket.

Piketon's Kennedy Jenkins looks for an opportunity to score while being surrounded by Waverly defenders Sarah Thompson, Michaela Rhoads and Paige Carter.

Piketon's Savannah McNelly looks to pass the ball to a teammate as Waverly's Raelynn Dale closes in on her.

Piketon's Kennedy Jenkins uses her height to score on a drive with Waverly's Delaney Tackett defending.

Waverly's Carli Knight looks up at the basket as she prepares to score on a layup with Piketon's Jazzlyn Lamerson chasing her.

Getting by Waverly defenders Lydia Brown and Paige Carter, Piketon's Jazzlyn Lamerson drives across the paint and looks to pass or score on a reverse layup.

Working to get around Waverly defender Sarah Thompson, Piketon's Bailey Vulgamore looks toward the basket.

In the Pike County Holiday championship battle Monday evening, the Piketon Lady Redstreaks made the Waverly Lady Tigers work to defend their title.

Piketon surged out to an 8-0 start, forcing the Lady Tigers to rally and come from behind to tie it 11-11 by the end of the first quarter. That momentum continued into the second quarter as Waverly outscored Piketon 22-8 to go up 33-19 at the half en route to a 57-44 win.

“We are going to celebrate this, because they (Holiday Classic championships) are never easy. This is our third in a row, and that is a testament to this junior class and what they mean to our program,” said Waverly coach John Bonifield. “They just have the attitude they are going to win every time they step on the floor. That’s what you need. It is great to have that since we don’t have any seniors. The juniors have stepped up to fill that void. I’m tickled to have them as part of my team.”

For Piketon, the future is bright as a freshman-laden team continues to improve each time they take the floor.

“We were in position to get rebounds, and they (Waverly) would slide us out of it. A lot of times we are in the right spots, but we were getting outmuscled. That wears you out as a player,” said Piketon coach Brett Coreno. “We are the youngest team in the league and one of the youngest in the area. Our girls are going in the right direction. I’m proud of them. They’ve never given up yet.”

Piketon’s Hayleigh Risner delivered the first point of the game after getting fouled in the paint and hitting the first of two shots. The score remained 1-0 in favor of Piketon for nearly two minutes as the two teams battled each other in the title game atmosphere. Then Piketon freshman Bailey Vulgamore had the first field goal of the game. She followed with a three-pointer after a Waverly turnover. Then another Lady Tiger turnover gave Kennedy Jenkins the opportunity score with a putback, creating an 8-0 lead while prompting a Waverly timeout.

After the timeout, Waverly sophomore Lydia Brown broke her team’s drought, sparking an 11-3 run by the Lady Tigers to end the quarter. After Brown’s bucket, Kelli Stewart scored by coming up with the ball and getting between Piketon defenders. Zoie Smith followed with a bucket, and Carli Knight added one point from the line, pulling Waverly within one, 8-7. Piketon sophomore Ava Little briefly increased the lead to two again with a freebie. Smith scored for Waverly, creating a 9-9. Then Jenkins put Piketon in front for the final time in the quarter before Knight closed the scoring with a layup, 11-11.

Risner had the opportunity to put Piketon ahead with the first points of the second quarter, 13-11. Smith answered once again with a tying drive, 13-13. Vulgamore had a pair of blocks for Piketon to keep Carter from scoring inside, but the Lady Tigers continued to run. Smith’s basket was the start of a 10-0 burst by the Lady Tigers, who found their way through Piketon’s zone defense and cashed in on a handful of PHS turnovers to go up 21-13.

Jazzlyn Lamerson broke the drought for Piketon, pulling her team within six, but Smith followed it with another basket to begin a 12-4 burst to close the half. In the middle of that run, Waverly’s Michaela Rhoads connected on a three-pointer for the double-digit lead, 27-17. With scoring from Knight, Carter and Smith, Waverly had pushed the lead to 33-19 by the break.

The teams played very evenly in the second half, but Waverly was able to maintain the double-digit lead to secure a third-straight Pike County Holiday Classic championship.

Midway through the third quarter, the Lady Redstreaks produced a brief 5-1 run that saw them cut Waverly’s lead down to 11, 41-30, using a bucket from Lamerson and a three-pointer from Vulgamore. In between those shots, Waverly freshman Kelli Stewart recorded a block defensively.

Waverly didn’t allow Piketon to pull closer than 11, as Smith and Raelynn Dale had back-to-back baskets to end the third quarter with a 45-30 advantage. Starting the fourth quarter, Smith and Dale teamed up again to record the first two buckets and increase the lead to 49-30. Waverly sophomore Lydia Brown had a block to give Dale the opportunity for her basket.

Jenkins had Piketon’s first points of the quarter from the line. Lamerson added another to briefly cut the lead to 16, 49-33. Waverly scored steadily for the remainder of the quarter with Smith having a basket, Knight having two and Sarah Thompson finishing with the finale, making the score 57-37.

For Piketon, Lamerson scored seven of the final 11 points. She began and ended a 7-0 burst in the final minute, finishing with an old-fashioned three-point play. Little had a bucket in between, making the final score 57-44 in favor of Waverly.

“Piketon is going to get better. They have turned the corner. They are an exciting team to watch. They are young and talented with guards and post players,” said Bonifield. “We knew it would be tough. Coach Coreno does a good job game-planning, so it wasn’t going to be easy. Then you have Piketon versus Waverly on top of it. We are happy to come out of here with the victory. It means the world to us to hold that trophy again.”

Unofficially, the Lady Tigers finished the game at 50 percent shooting from two-point range, connecting on 24-of-48 shots. They hit 1-of-5 from long distance. Piketon hit on 15-of-47 from two-point range and 2-of-11 from downtown. Both teams had 23 turnovers.

“I can’t be more proud. It was not easy for us. Piketon played extremely hard. They will be tough down the stretch come tournament time,” said Bonifield. “We can go nine deep and not miss a beat. This team gets along with each other. We hung out all day today (prior to the game). That is great to see as a coach.”

For Waverly, Zoiee Smith and Carli Knight each had 17 points. Knight was the beneficiary of many down-court passes from Smith on fast breaks, but she also had steals of her own to generate points. Paige Carter led Waverly on the boards with seven rebounds. Knight and Smith each had five.

Smith had numerous assists, delivering the ball in the perfect position for her teammates to take advantage of the opportunity to score.

“I think that is the best part of my game. I’m not the best shooter in the world. When I’m attacking and those defenders are closing in on me, the first look is to pass it. Coach keeps telling me they are looking at me to attack,” said Smith after the game. “That’s something I work on a lot and it has always come naturally to me. I’m very thankful for having that ability because I love being able to put my teammates in position to score.”

Smith is thrilled to see her teammate Carli beating the defense and scoring.

“Carli is doing very well. She has stepped up to the challenge and filled that void left by her sister (Kami, 2019 graduate),” said Smith.

It took a little while for Knight to gain her confidence as a part of Waverly’s scoring attack.

“I knew I had to play hard for everyone. I missed a lot of layups early in the season, so I knew I had to focus. I sprint the court so fast that I would miss the layup. The coaches told me to slow down and go up with my momentum,” said Knight.

“Zoiee is a great passer. As long as I get down the court, I will get rewarded. I do it for my teammates, and not just me.”

Knight added, “I’m so proud of every single one of my teammates. Our defense has gotten better since we struggled midway through December. We are starting to work together again and out-hustle everybody.”

For Piketon, Jazzlyn Lamerson and Kennedy Jenkins each scored 12 points to lead the Lady Redstreaks in scoring. They both had three rebounds. Hayleigh Risner finished with 15 rebounds, one steal and one assist. Bailey Vulgamore scored eight points and blocked two shots.

“This is a good warmup to the end of the first round of our league,” said Coreno. “We will be on the road after the new year. We will just have to battle through it and grow up.”

Piketon’s next game is set for Tuesday evening, Jan. 7, at Paint Valley. The Lady Redstreaks are 4-7 overall and 0-5 in the Scioto Valley Conference.

“They played a terrific game,” said Smith, complimenting Piketon. “That’s a good team. They are young, but they have a lot of talent. They are going to be scary in the years to come.”

The Lady Tigers improved to 7-2 overall and remain at 3-2 in Southern Ohio Conference Division II play. They were set to get back into action Thursday evening in a home game against Northwest. They will head to Jackson Saturday before returning home Monday to take on Valley.

“Winning the championship is fun,” said Smith. “This is a boost for how the second half of our season is going to go. It is huge to have the momentum to go into the new year. I’m proud that we’ve won it three years in a row. I love the feeling.”