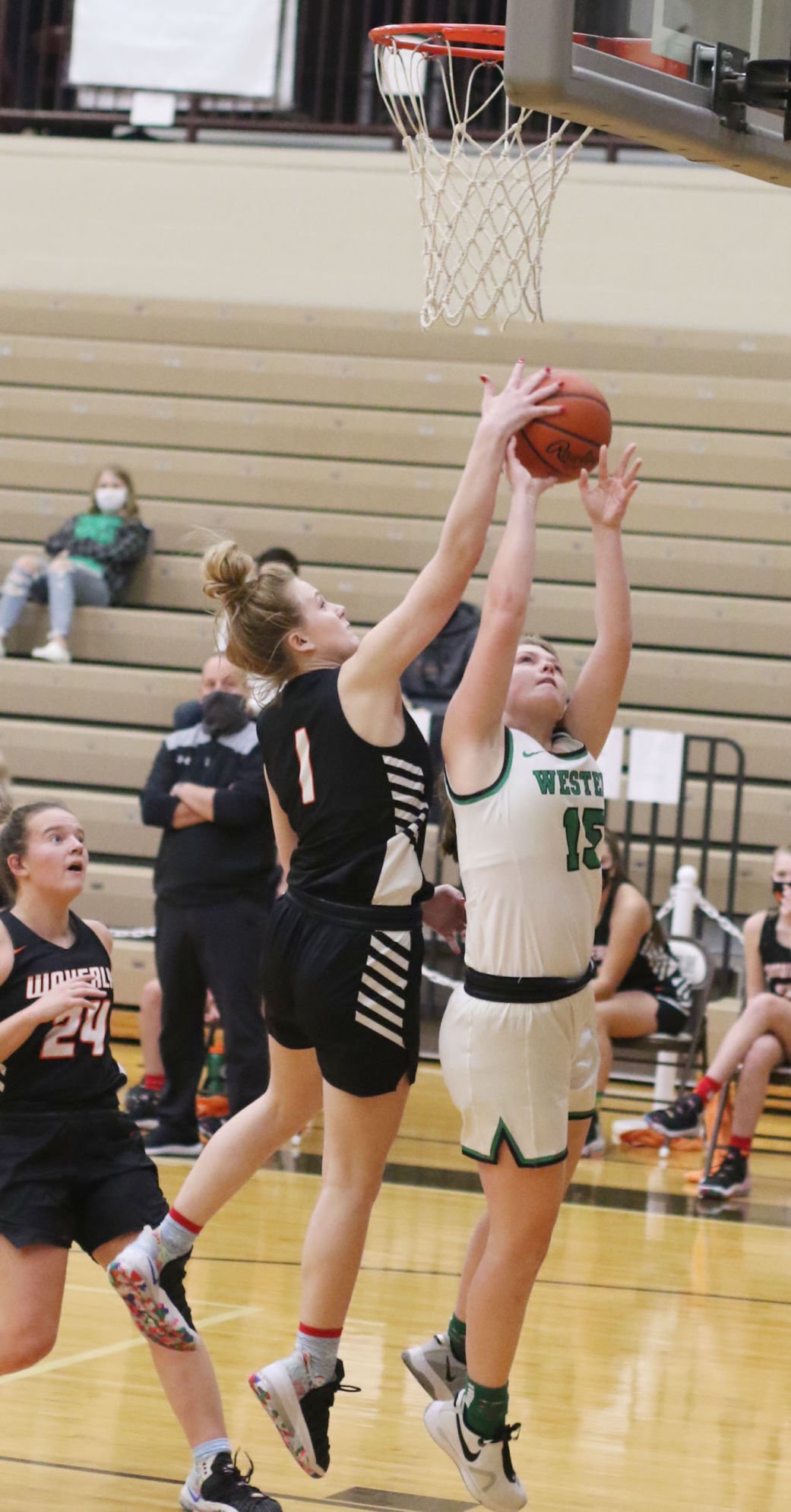 Waverly’s Kelli Stewart goes for a block on a shot attempt by Western’s Alyssa Marhoover. 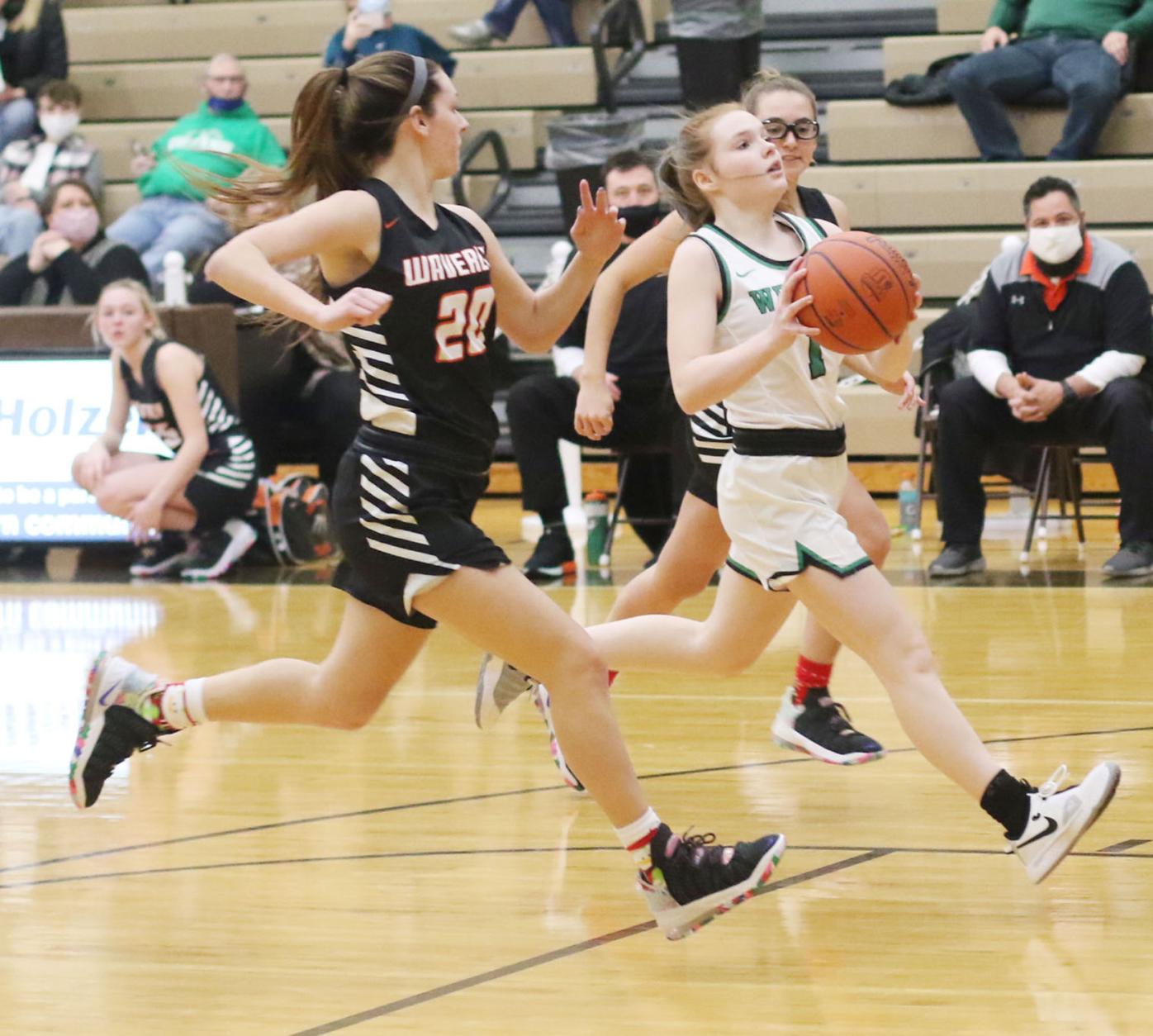 Western’s Alicia Francis heads down the floor on a fast break with Waverly defenders Ava Little (20) and Michaela Rhoads (12) in pursuit. 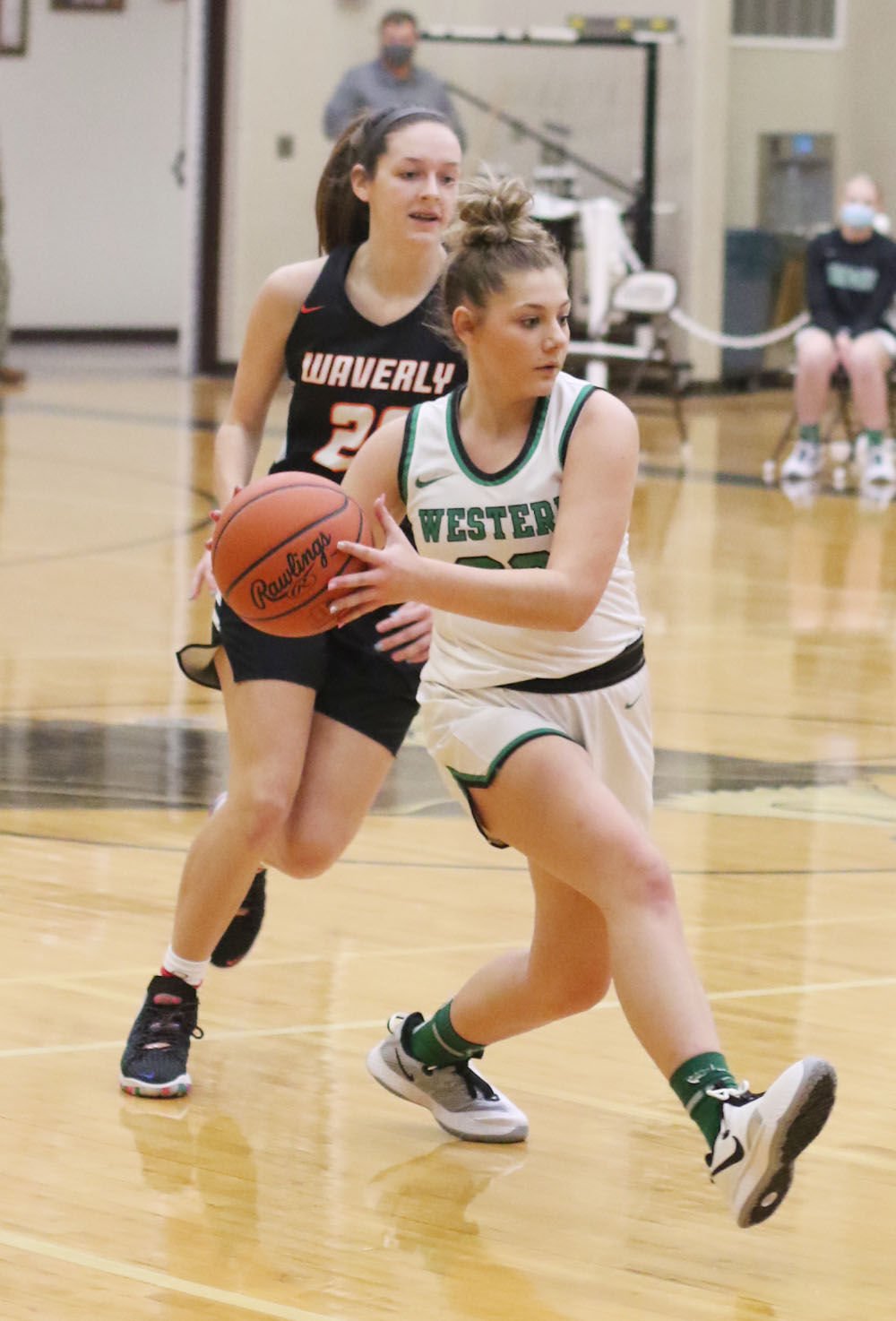 Western’s Kenzi Ferneau prepares to send the ball to a teammate on a bounce pass with Waverly’s Ava Little defending. 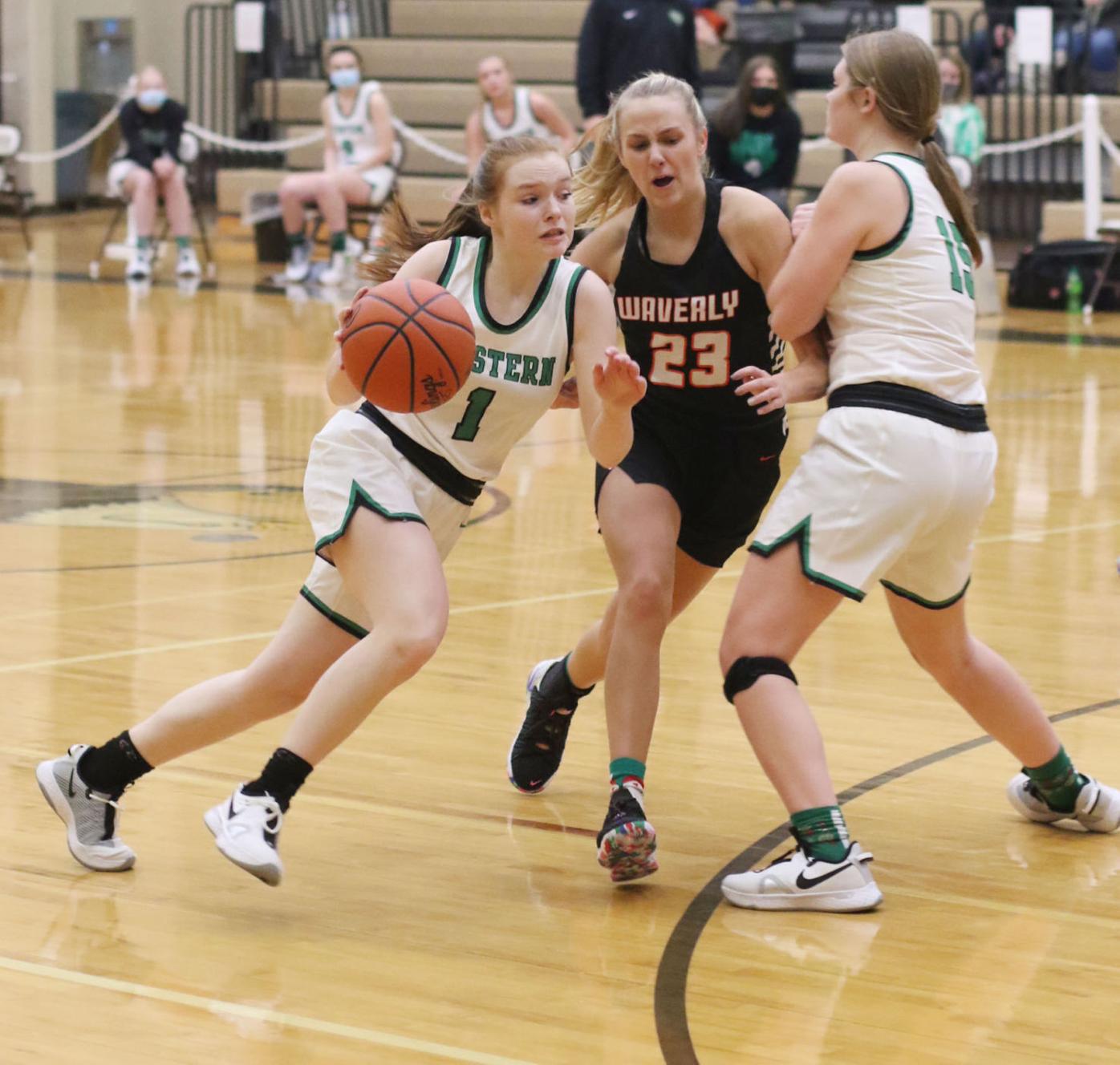 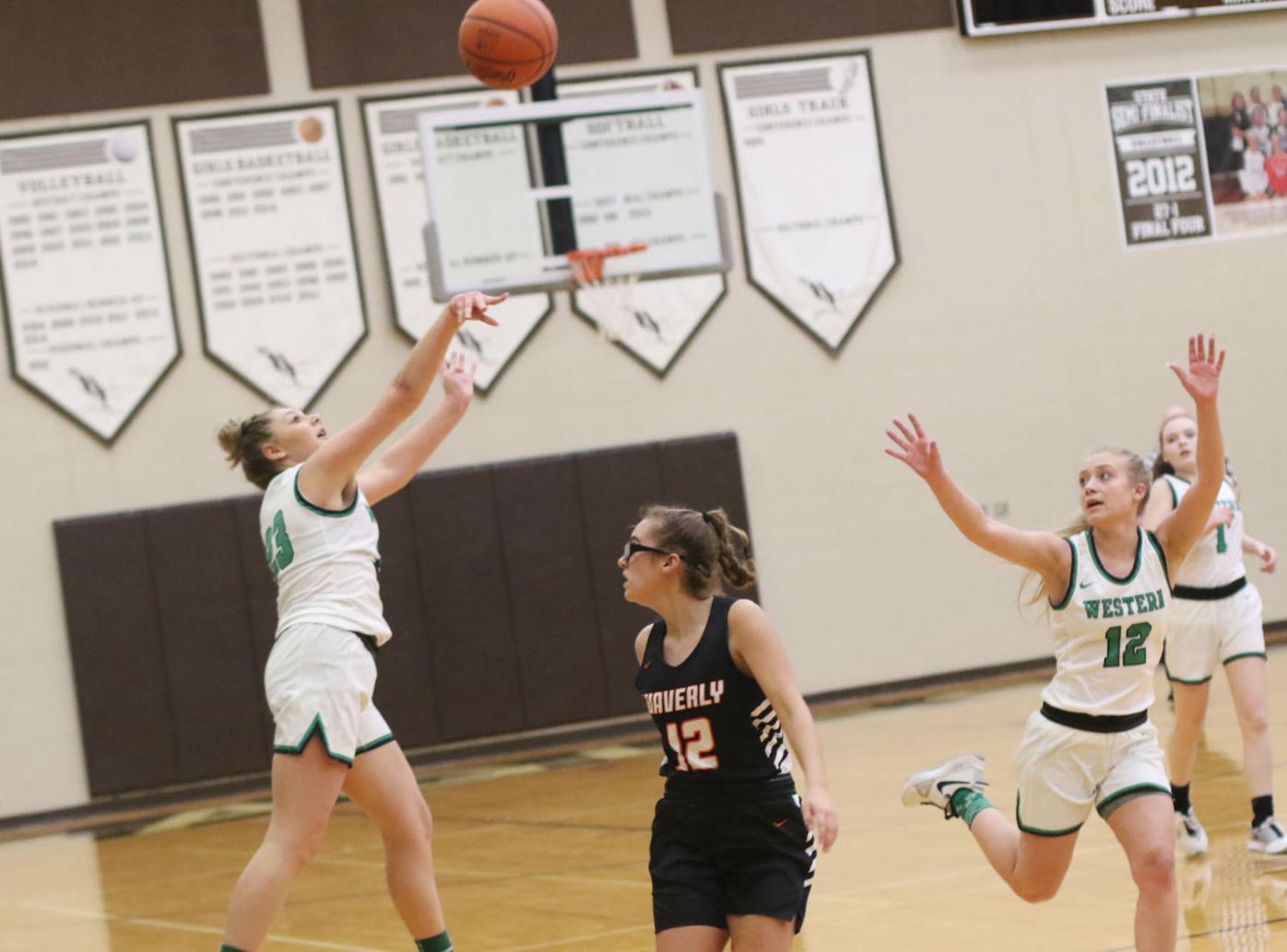 Western’s Kenzi Ferneau attempts to hit a buzzer beater at the end of a quarter.

Waverly’s Kelli Stewart goes for a block on a shot attempt by Western’s Alyssa Marhoover.

Western’s Alicia Francis heads down the floor on a fast break with Waverly defenders Ava Little (20) and Michaela Rhoads (12) in pursuit.

Western’s Kenzi Ferneau prepares to send the ball to a teammate on a bounce pass with Waverly’s Ava Little defending.

Western’s Kenzi Ferneau attempts to hit a buzzer beater at the end of a quarter.

For two-and-a-half quarters, the Western Lady Indians kept themselves in their opening round Holiday Classic basketball game versus the Waverly Lady Tigers Saturday night.

Ultimately, Waverly’s pressure defense proved to be too much for Western to overcome, as the Lady Tigers pulled away in the second half for a 58-41 win.

“We witnessed their shooters tonight. They hit five threes on us,” said Waverly coach John Bonifield of facing a scrappy Western team. “When we would try to push it out to seven or eight, they would knock down a three and get the lead back down. Give credit to (Alicia) Francis, (Kenzi) Ferneau and Western. They were ready to go. That’s the Holiday Classic for you. It just seemed like it took us a while to get our game legs going.”

Western came out defensively in a zone, focused on keeping Waverly from driving inside and scoring on layups. Senior Michaela Rhoads had Waverly’s first points two minutes into the opening quarter. Western senior Brooklyn Tackett responded with a basket of her own, before sophomore teammate Alicia Francis added another, giving the Lady Indians what would be their only lead 4-2.

It was slow going against the Western defense, but Waverly responded with a 6-0 run over the next four minutes with Zoiee Smith and Kelli Stewart taking turns, 8-4. During that stretch, Waverly senior Carli Knight went down with an apparent ankle injury and did not return to the floor. Finishing the opening quarter, Western cut the lead to two when Francis broke free again to score. Stewart responded with a shot to make the lead 10-6.

The slow scoring pace continued in the second quarter. Francis was fouled on a shot attempt to start the offense, hitting both of her freebies. Waverly’s defense continued the pressure, as the Lady Indians suffered another string of turnovers over the next 2:30. But the Waverly offense still wasn’t firing. Smith and Carter each had a bucket over that stretch to push the lead to 14-8.

The Lady Indians were able to have some success with a press break, giving Alyssa Marhoover the opportunity score a pair of buckets around two free throws from Zoiee Smith, 16-12. Smith worked to take control of the game for her team, connecting on a three-pointer. However, Francis answered for Western with a triple before Ferneau did the same, cutting the lead to 19-18. Waverly’s Delaney Tackett, called upon with Knight out of the rotation, scored the final bucket of the half to give Waverly a 21-18 advantage at the break.

Coming out of halftime, Tackett unleashed a three-pointer from the corner, sparking a 10-0 run by the Lady Tigers. Sarah Thompson and Paige Carter followed with back-to-back baskets in the paint. Carter added a free throw on her next opportunity before Smith scored off a Western turnover, opening a 31-18 lead. At that point, the Lady Indians could have given up, but they continued to rally.

Francis had a triple and followed with an old-fashioned three-point play. Then Ferneau connected from long range, finishing a 9-2 run that saw the Lady Indians cut that lead down to six. Waverly’s pressure worked again, leading to an 8-0 run with scoring from Carter, Smith and Stewart. Marhoover had the final bucket of the quarter for Western, making the score 41-29.

After Marhoover opened the scoring in the fourth quarter, Stewart answered for Waverly. Western trimmed the lead to single digits twice early in the fourth quarter. The first time came after Ferneau connected on a triple, 43-34. Smith responded with a basket for the Lady Tigers. Then Western’s final push came with Chloe Beekman connecting from the line and Francis scoring again to trim Waverly’s lead to eight, 45-37.

From there, the Lady Tigers surged ahead and took control for good. Carter responded with a bucket, beginning a 13-4 run to finish the game. Next Tackett connected on a three-pointer, pushing the advantage to 50-37. The Lady Indians cut the lead to 11, 51-40. That was as close as Western could get in the final minutes.

Smith took control from the point, slowing the game down and working the ball until she found the opportunity to drive to the basket and score for an old-fashioned three-point play. That was the start of a 7-0 run by the Lady Tigers to finish the win. Stewart had two more free throws before Smith had the final basket for the Lady Tigers. Then Marhoover added a final free throw for the Lady Indians to finish the game, 58-41.

“We relied on Zoiee and Paige once Carli went down,” said Bonifield. “Zoiee did an excellent job rallying us. Paige was relentless on the boards like always. Kelli came in and gave us great minutes off the bench with double digits in points.”

“It takes a team. Nothing is guaranteed. We had good minutes from our bench when we needed it. You hate to see any player go down, but when Carli went down, Delaney did a great job stepping up for her, along with Ava (Little). Delaney can definitely shoot the basketball. It is just a matter of getting her confidence. When she made one, you could see her calm down and relax,” said Bonifield.

“Abbie was really active and showed the strides we like to see. She’s played high level volleyball and softball, so the pressure is not too much for her. She just needs more minutes.”

For Western, Francis led the charge with 17 points, followed by Ferneau and Marhoover with nine points each. Ferneau and Tackett each secured five rebounds as well.

“We shot well. It was probably the best percentage we’ve had all year,” said Western coach Mike Jordan. “These girls gave me their all tonight. If we can play that hard all year, we’re going to win some games.”

“The girls played hard. We knew going into the game whether we could handle their pressure would be the difference. We didn’t handle it well,” said Western coach Mike Jordan. “Once we got into the half court, they are so aggressive (on defense) that you can get backdoor shots against them. But when you turn the ball over half the time trying to get into the half court, that makes it tough.”