Jonathan Teeters, head coach for the Waverly Post 142 Senior Shockers, stands in the middle of his players and assistant coaches for a group photo after achieving his 200th win as a coach Saturday afternoon. The victory came when Post 142 won its game 6-4 over Athens at Hoffman Field in Chillicothe in the Jadwin Memorial Tournament. 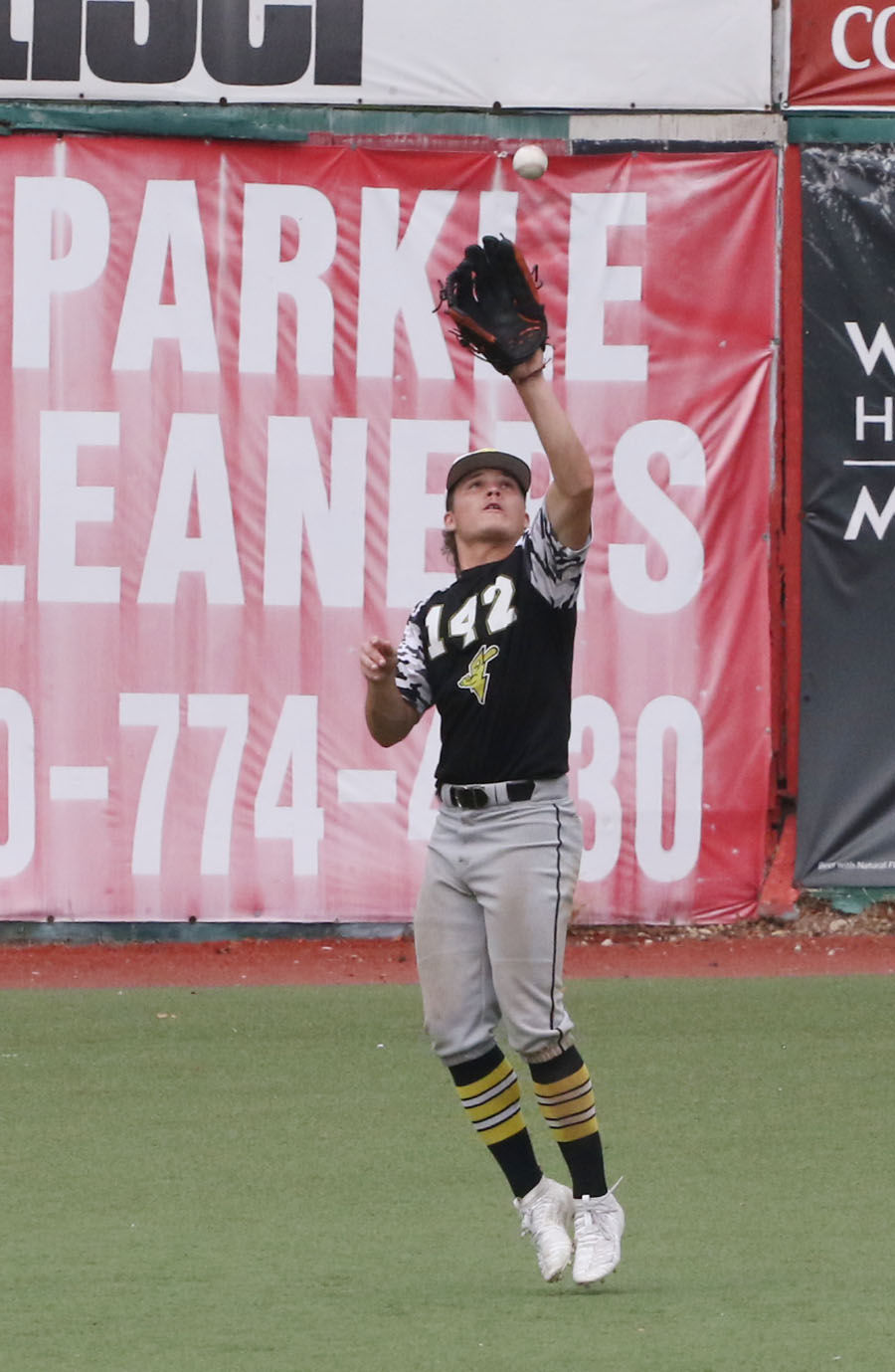 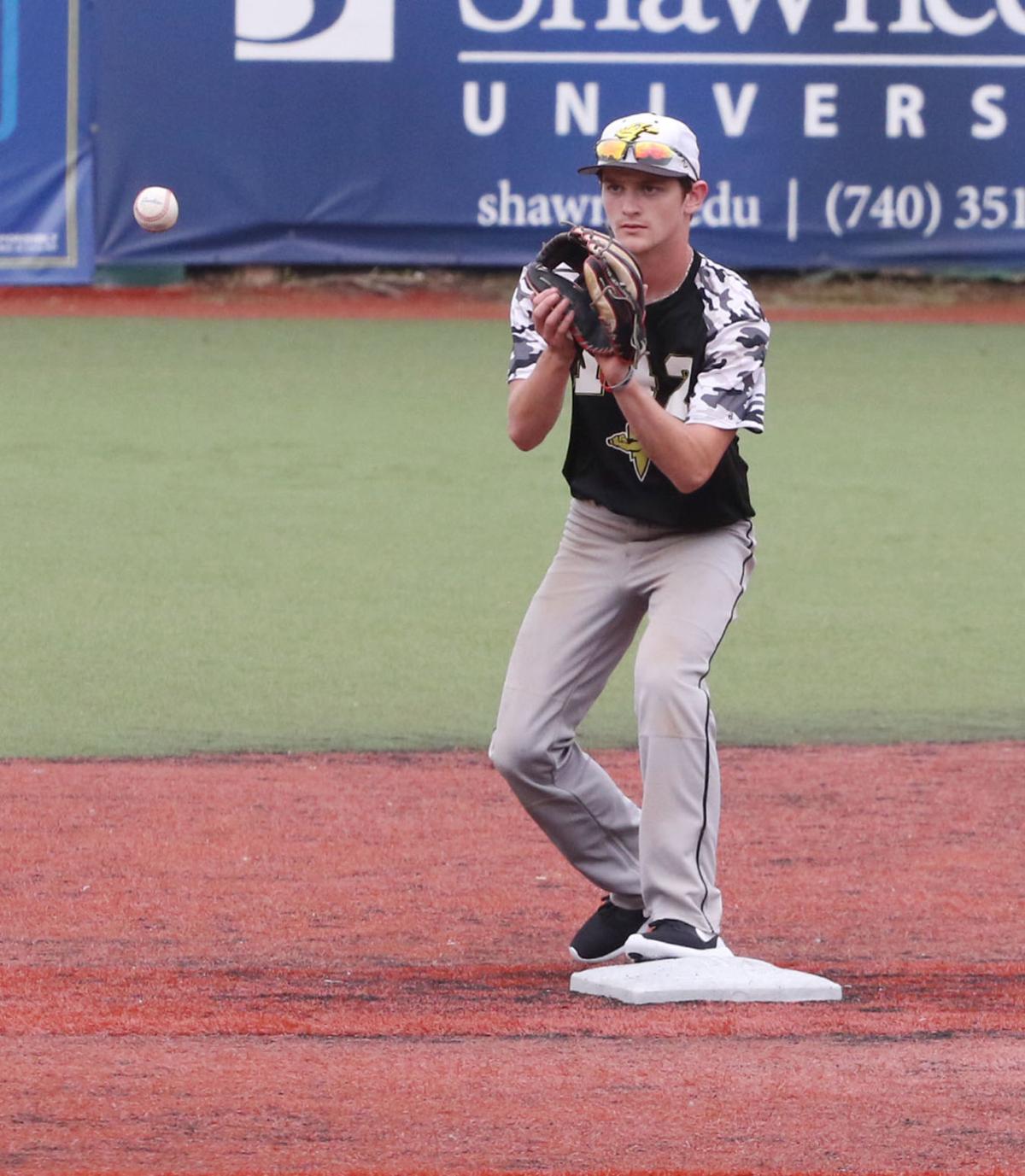 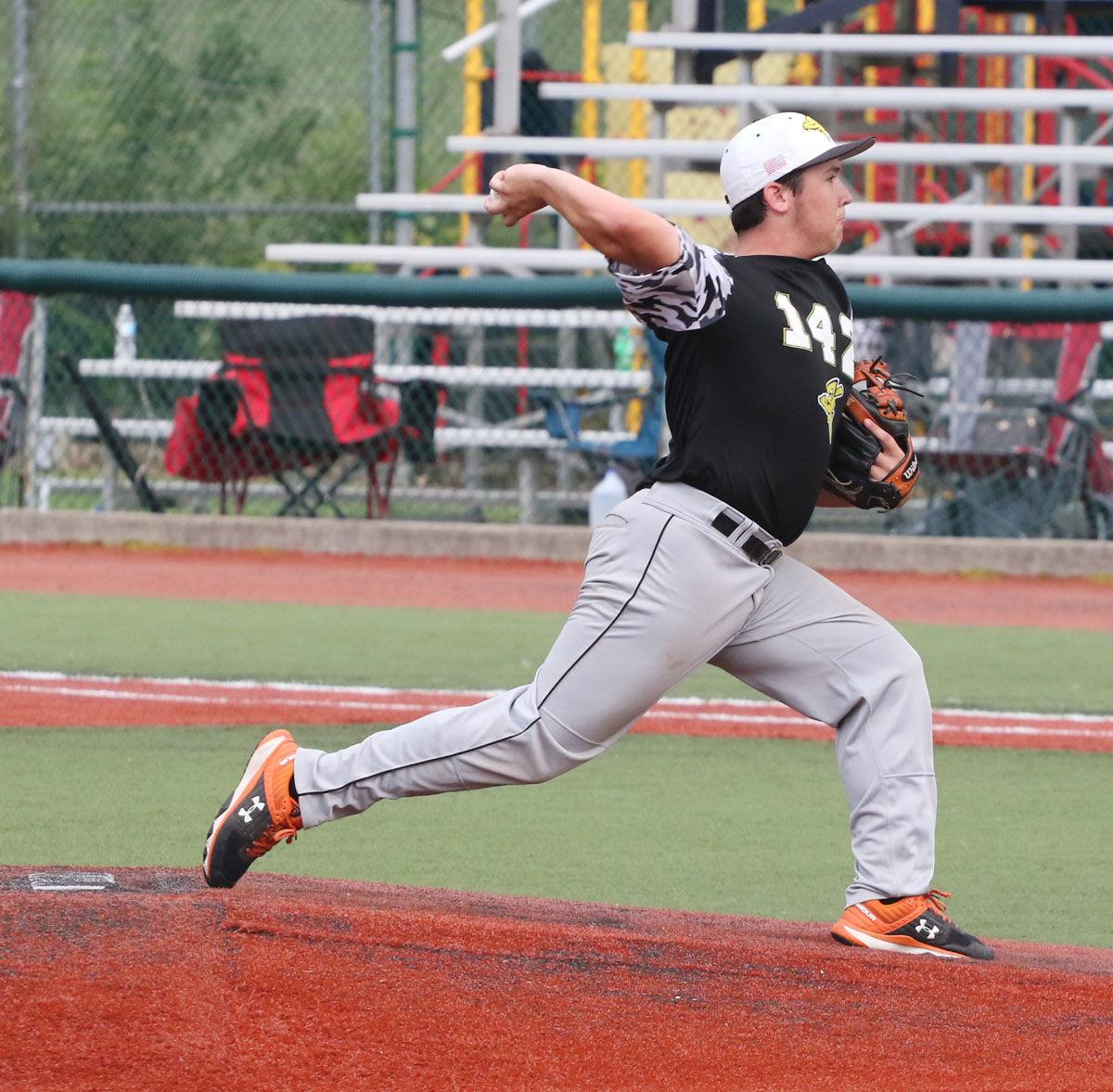 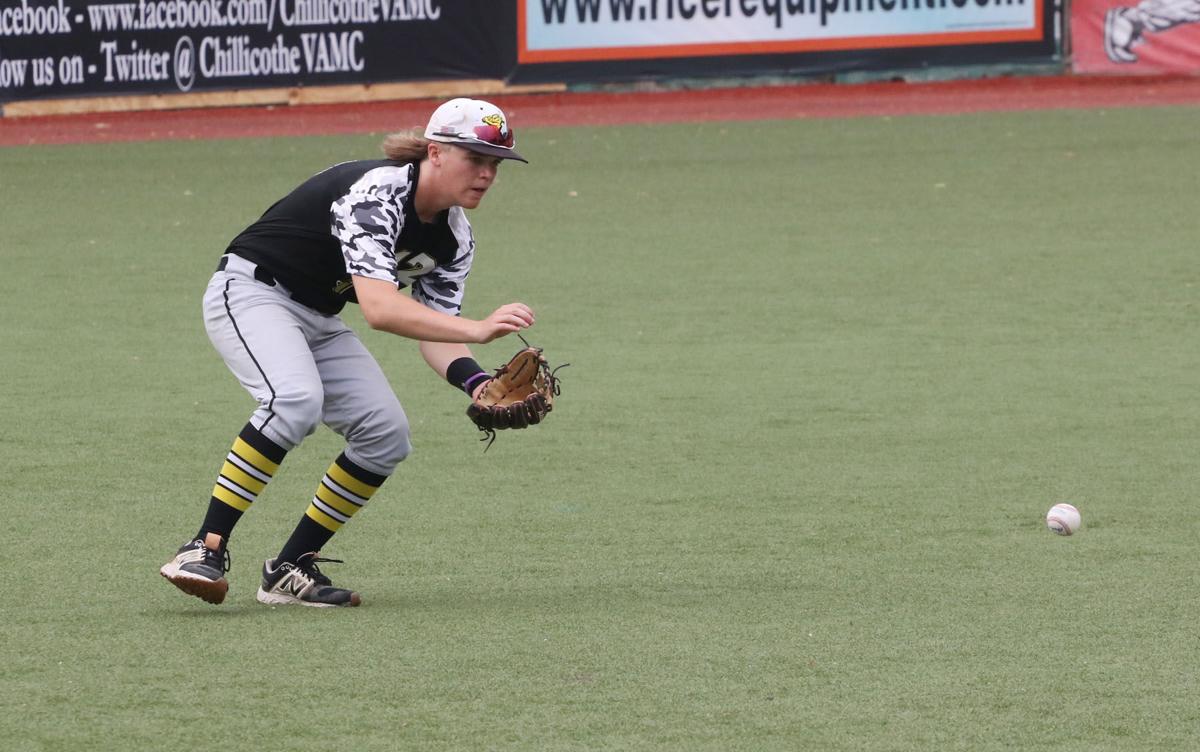 Left fielder Logan Maynard prepares to scoop up a grounder on a hop. 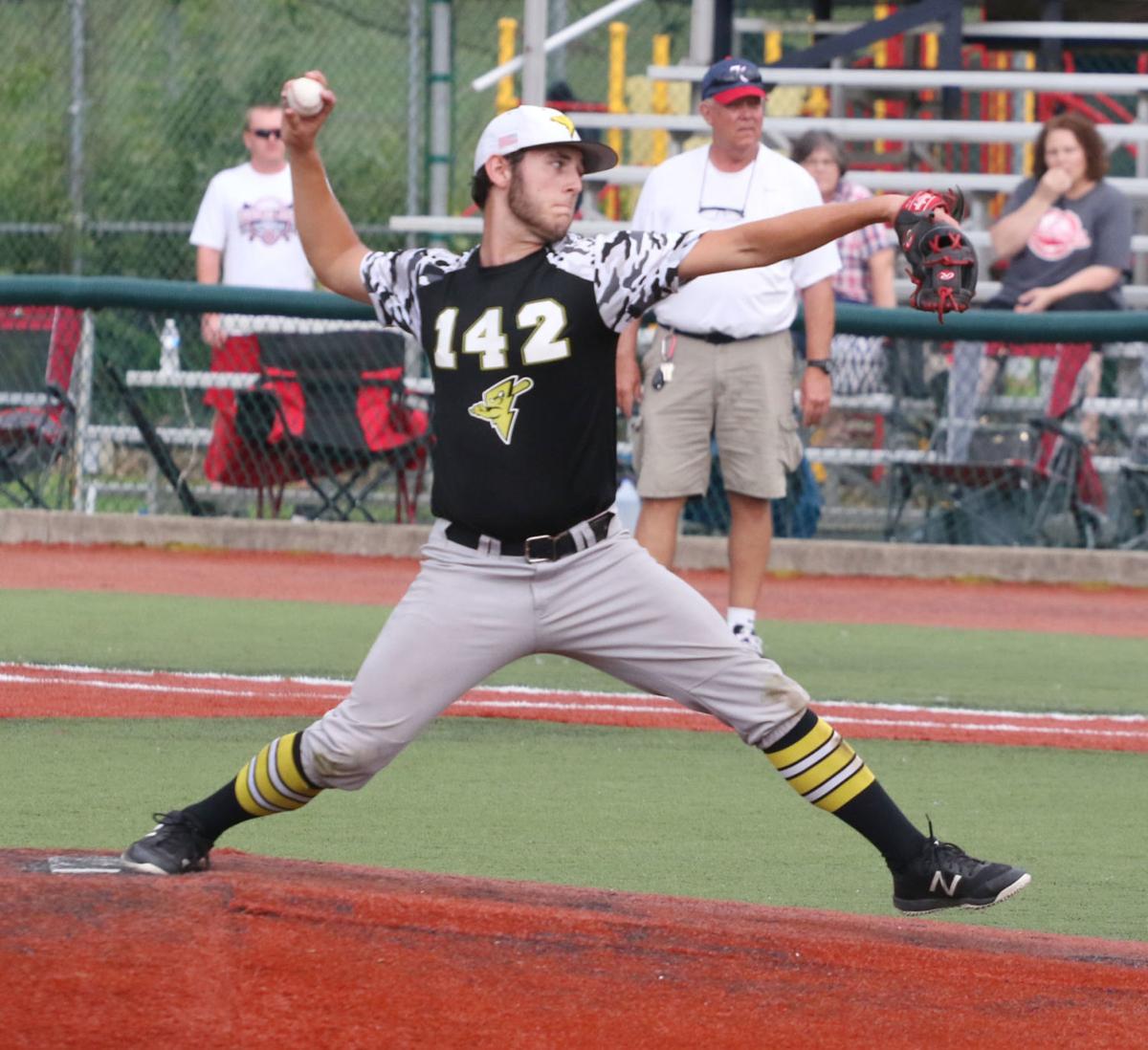 Roger Woodruff delivers a pitch to an Ashland batter.

Jonathan Teeters, head coach for the Waverly Post 142 Senior Shockers, stands in the middle of his players and assistant coaches for a group photo after achieving his 200th win as a coach Saturday afternoon. The victory came when Post 142 won its game 6-4 over Athens at Hoffman Field in Chillicothe in the Jadwin Memorial Tournament.

Left fielder Logan Maynard prepares to scoop up a grounder on a hop.

Roger Woodruff delivers a pitch to an Ashland batter.

It was a special weekend for Waverly Post 142 Senior Shockers Head Baseball Coach Jonathan Teeters, as his 200th American Legion baseball coaching victory was provided by his team Saturday afternoon.

The win came in the form of a 6-4 triumph over Athens at Mary Lou Patton Park in Chillicothe on Hoffman Field. It was the third game of four that the Shockers played in the 2020 Jim Jadwin Memorial Tournament.

“I’ve had a lot of great players, assistant coaches, and a great mentor in Coach Jeff Noble (Waverly High School),” said Teeters of his 200th career win. “We have a really great group of players this summer, who all get along and put the team first. It’s a pleasure to get No. 200 with this team.”

The Shockers had an up-and-down tournament, finishing 2-2 for the weekend, while moving to 8-5 overall for the 2020 season. They faced Lancaster Post 11 Tuesday evening at Piketon High School. They will be home at PHS again Wednesday evening and will face Marietta Post 64 at 6 p.m. Then it is off to Ashland, Kentucky, to play in the Ashland 4th of July tournament on Friday, Saturday and Sunday.

Game summaries from the four Jadwin contests played by the Shockers are included in the following sections.

The Shockers scored a run in the opening inning after Michael Goodman singled, stole second base, and went to third on an error. After Weston Roop worked a walk, Goodman and Roop executed a double-steal to allow Goodman to score, 1-0.

Hillsboro briefly tied the game in the third inning by generating its only run on a Waverly error.

Post 142 came right back by answering with five runs in the bottom of the third to go up 6-1. Kannon Pack led the offense with a two-RBI double. Jake Thornsberry and Easton Lansing each had RBI singles. The other RBI came from Ben Flanders when he reached base on a fielder’s choice.

The Shockers continued to add insurance runs, tacking on two more in the bottom of the fifth inning. Goodman led off the frame with a double, scoring on an RBI-single from Pack. Later, Jerrod Tackett provided the RBI-single to send Pack home, extending the lead to 8-1.

Post 142 added its final three runs in the bottom of the sixth inning to bring the game to an end on the 10-run rule. Logan Maynard led off with a double and sprinted to third base on a passed ball. Levi Coriell provided the hit to send Maynard home, 9-1. Roger Woodruff delivered the next base knock before a pair of outs followed. But the scoring wasn’t complete. Pack was hit by a pitch to push Coriell home. Then Mason Ratcliff was hit by a pitch as well, sending Woodruff home as the finishing run in the 11-1 victory.

Ratcliff (1-1) was also the pitcher, throwing six innings to pick up the victory. He gave up one unearned run on eight hits, while striking out four and walking three.

“Mason was very effective today on the mound. It was a solid outing,” said Teeters. “Offensively we had a good approach and took a lot of quality swings.”

Pack led the way offensively, going 2-for-3 with four RBIs, two runs and a stolen base. Goodman was 2-for-4 with a double and three runs. Roop was also 2-for-3 with a run. Flanders, Lansing, Tackett, Thornsberry and Coriell all collected one RBI each.

The second game of the day for the Shockers was played at V.A. Memorial Stadium where they squared off with Ashland (Kentucky) Post 76.

Unfortunately for the Shockers, Ashland generated a lot of hard hit balls and took advantage of Post 142 errors to collect a 19-2 win.

Ashland’s pitcher, Wright, gave up just one hit in four innings. That lone hit belonged to Shocker Kannon Pack, who finished 1-for-2. Jacob Thornsberry and Parker Clemmons each scored a run after working a walk in the third inning.

Returning to action Saturday morning, the Shockers delivered a 6-4 win over Athens to give their coach, Jonathan Teeters, his 200th American Legion baseball coaching win.

To start the offense at Hoffman field, Weston Roop provided a one-out double in the top of the first, scoring when teammate Lane Mettler doubled as well.

Post 142 added two more runs in the top of the third inning. Michael Goodman led off with a single and stole second base. Pack was hit by a pitch next. Both Goodman and Pack scored when Easton Lansing singled to generate a pair of RBIs. Lansing became the third out when he tried to go for second base on the throw home.

Those two runs were needed to keep the lead, as Athens bounced back with a pair of runs in the home half of the inning. Waverly remained in front 3-2 until the bottom of the fifth inning when Athens generated two more runs to take a 4-3 advantage.

The Shockers quickly responded with three runs in the top of the sixth inning to take the lead for good. Representing the tying run, Jake Thornsberry drew a one-out walk before Ben Flanders was able to reach on an error. Roger Woodruff followed with a double to center field, sending Thornsberry home to make the score 4-4. Roop later drove Flanders and Woodruff home with a single to center field, extending the margin to 6-4.

Athens managed to get a runner to base in the bottom of the sixth inning, but relief pitcher Lane Mettler battled back with two strikeouts on the mound to bring the contest to an end as a 6-4 win.

Cruz McFadden started on the mound and pitched four innings for the Shockers, giving up two earned runs on five hits, while striking out six and walking two. Woodruff followed with 1.1 innings of relief, giving up two runs on two hits, while striking out four and walking three. Mettler picked up a save by working the final .2 inning and recording two strikeouts to end the game.

“Cruz (McFadden) set the tone for us from the get-go. I’m very pleased with his performance,” said Teeters. “Woody (Woodruff) was solid in the work he put in, and Lane (Mettler) came in to shut the game out. Woody and Weston (Roop) came up big for us in the sixth with some key hits, which led to runs being scored.”

Following the trend of Friday, the second game on Saturday did not go as well for the Shockers, as they fell to Chillicothe Post 757 by a score of 14-1 at V.A. Memorial Stadium.

The Shockers produced eight hits, but they also had two costly errors and no strikeouts from the pitchers. Chillicothe generated 11 hits.

Logan Maynard had the lone RBI in the loss, providing a single to score Lane Mettler after he singled in the bottom of the sixth inning. Maynard finished 1-for-2 from the plate, as did Mettler. Jake Thornsberry served as the designated hitter and went 2-for-3. Easton Lansing was a perfect 3-for-3. Weston Roop also went 1-for-3.