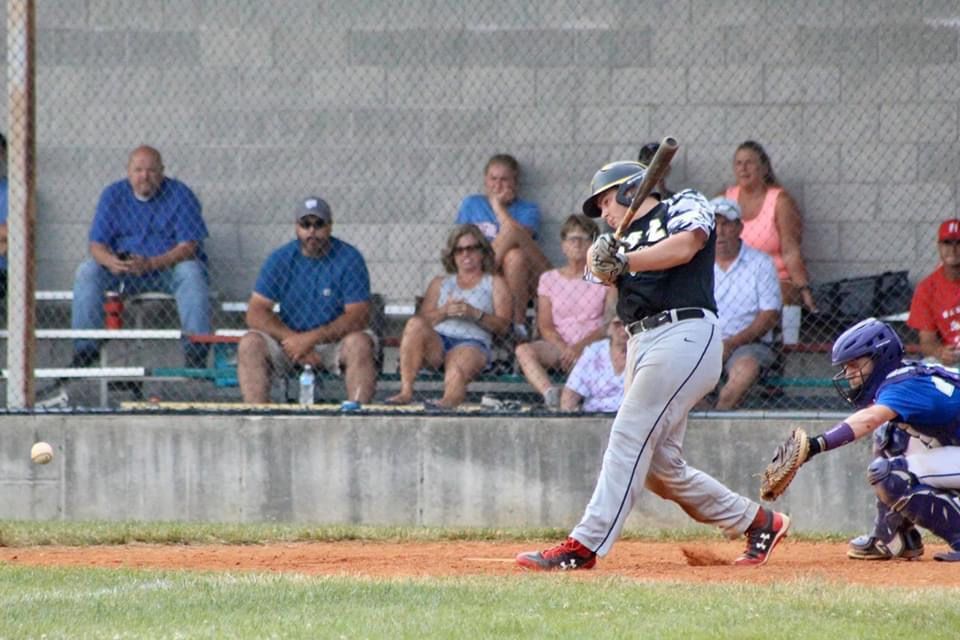 Shocker Easton Lansing connects on one of his four hits in Saturday’s battle with Portsmouth Post 23 in the Hillsboro Wood Bat Tournament at Shaffer Park. 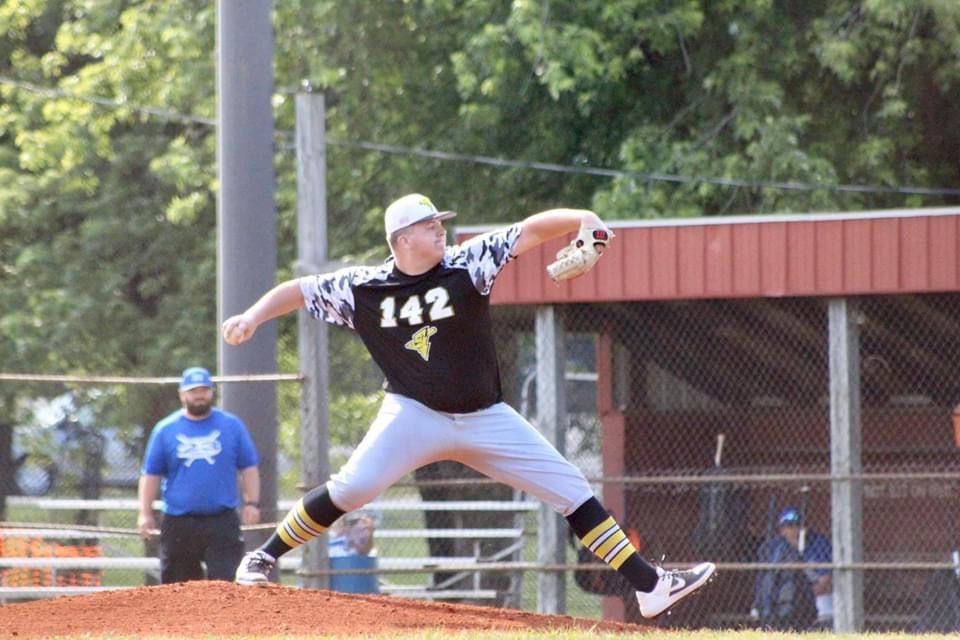 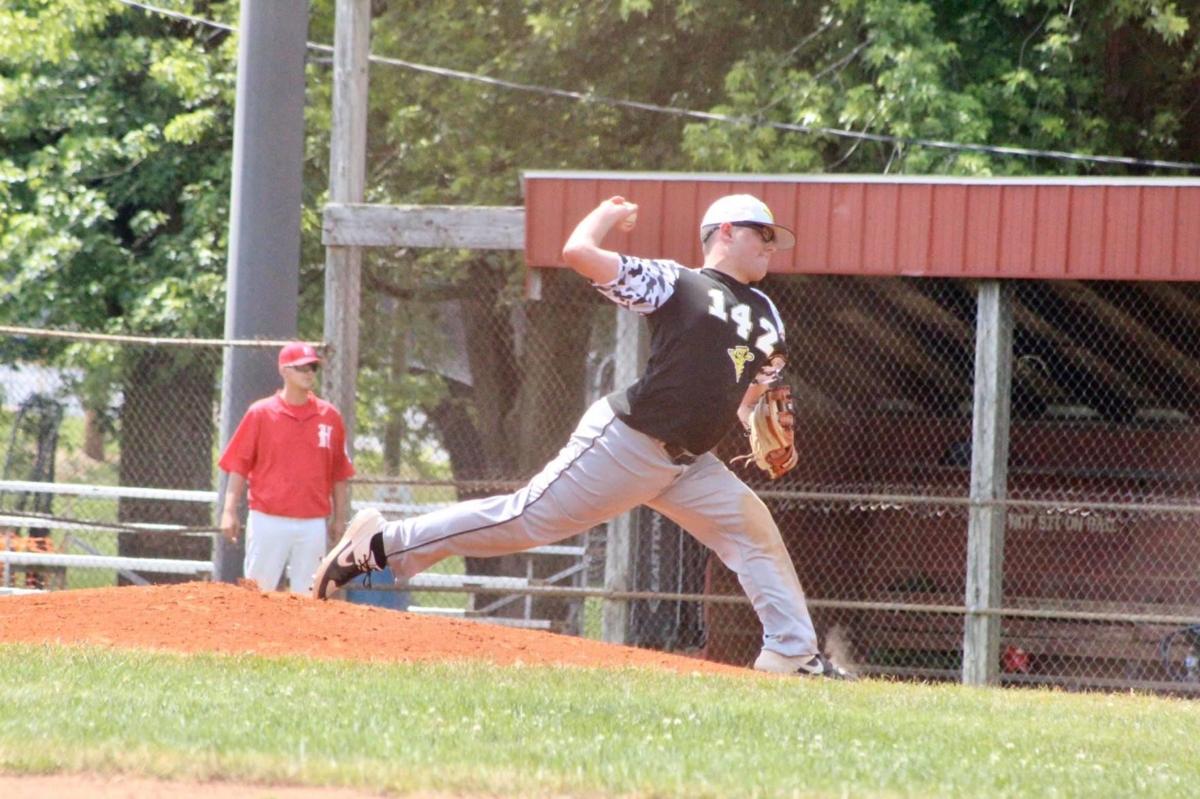 Derek Eblin delivers a pitch to a batter in Saturday’s 11-0 victory over the Hillsboro Mavericks. 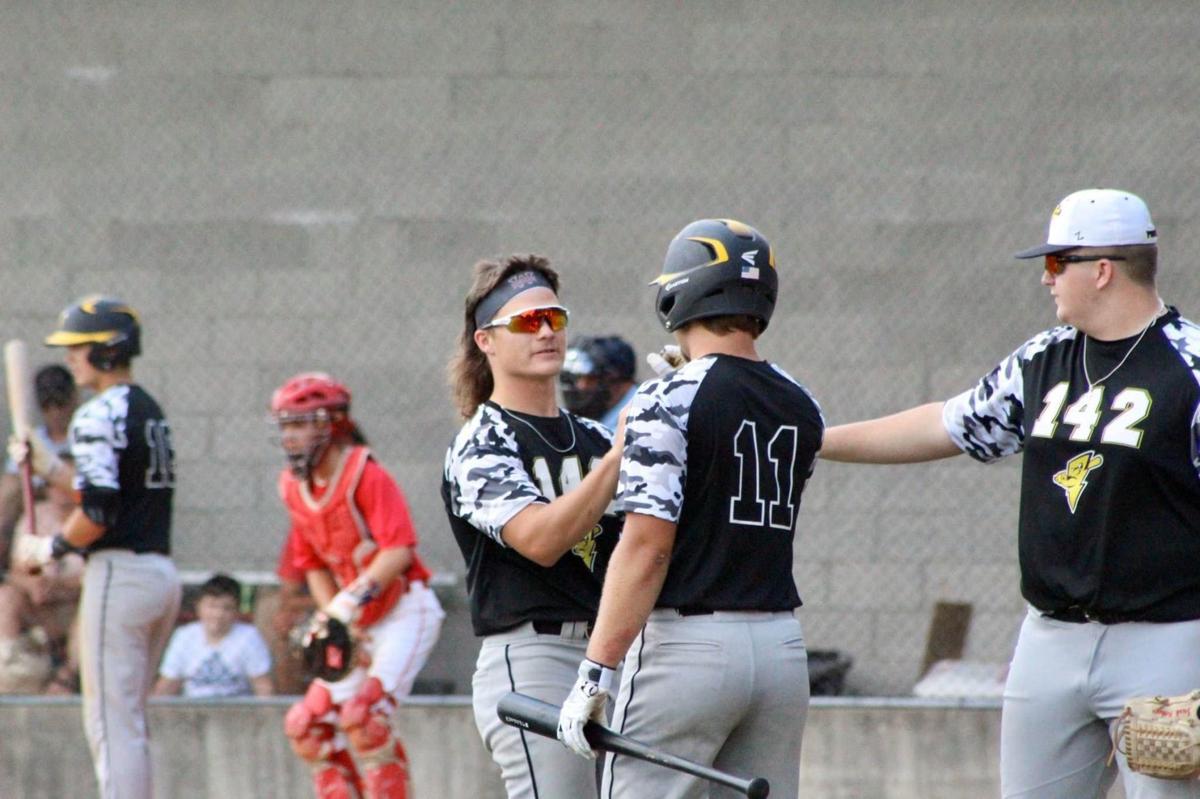 Michael Goodman (left) and Jacob Mathews (right) meet Kannon Pack at the plate for high fives in the game versus the Hillsboro Mavericks. 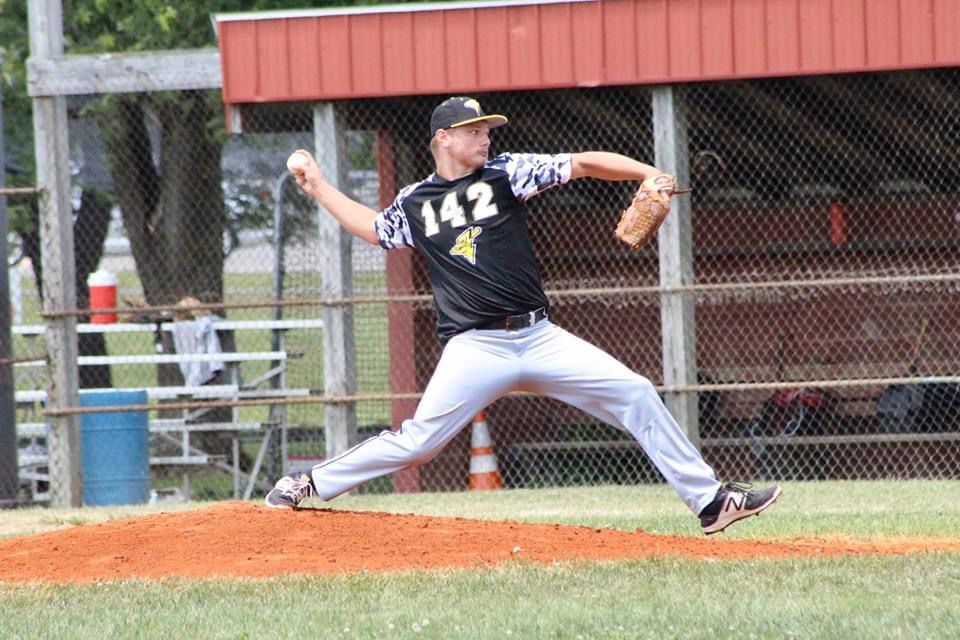 Lane Mettler pitches in Friday’s opener against the Troy Legends.

Shocker Easton Lansing connects on one of his four hits in Saturday’s battle with Portsmouth Post 23 in the Hillsboro Wood Bat Tournament at Shaffer Park.

Derek Eblin delivers a pitch to a batter in Saturday’s 11-0 victory over the Hillsboro Mavericks.

Michael Goodman (left) and Jacob Mathews (right) meet Kannon Pack at the plate for high fives in the game versus the Hillsboro Mavericks.

Lane Mettler pitches in Friday’s opener against the Troy Legends.

Playing in their first baseball tournament of the summer season, the Waverly Post 142 Senior Shockers had a very strong double-header performance on Saturday, winning both games in dominant fashion.

Playing a total of four games in the Hillsboro Wood Bat tournament over the weekend at Shaffer Park, the Shockers went 2-2 to improve to 5-3 overall. Losses on Friday and Sunday bookended the double-header sweep, leaving the Shockers just outside of contending for the tourney championship.

In a game that was close from beginning to end, the Waverly Post 142 Senior Shockers saw the Troy Bombers put together a sixth-inning rally to take the 5-4 win in Friday afternoon’s opening contest at Hillsboro’s Shaffer Park.

The Bombers were opportunistic, scoring first in the top of the opening inning by starting the inning with a single and a walk. Post 142 pitcher Lane Mettler was able to strike the next three batters out, but a wild pitch allowed one runner to score and the second swiped home to make the lead 2-0.

Waverly cut the advantage in half in the home half of the inning. Logan Maynard reached base on an error, moved into scoring position with on a single from Derek Eblin and scored when Lane Mettler followed with another hit, 2-1.

Neither team scored in the second inning, Then Post 142 took the lead in the bottom of the third. The Shockers quickly filled the bases with one out, as Maynard walked, Eblin singled, and Mettler walked. All three of them moved up on a wild pitch with Maynard scoring to make it 2-2. J.T. Barnett provided the next hit to push Eblin and Mettler home, creating the 4-2 advantage.

Troy used a walk and a double to score a run in the top of the fourth inning, cutting the lead to 4-3. The Bombers added two more runs in the top of the sixth, capitalizing on opportunities to move in front, 5-4.

Post 142’s only hope of a rally came when Weston Roop reached on an error with two outs in the bottom of the sixth. But the next batter hit a fly ball to left field, bringing the contest to a close in a 5-4 loss.

“It was a nice outing for Lane,” said Waverly coach Jonathan Teeters. “We just didn’t play well enough to deserve to win this game.”

From the plate, J.T. Barnett drove in two runs with a 1-for-2 performance. Lane Mettler helped his own cause by also going 1-for-2, adding an RBI. Derek Eblin finished 2-for-3 with a run, while Michael Goodman was 1-for-3.

That wrapped up Friday’s play for the Shockers. They had a little time to rest before squaring off with the Hillsboro Mavericks at 3 p.m. on Saturday afternoon, followed by Portsmouth Post 23 at 5:30 p.m.

Saturday was a solid day offensively for the Shockers, rolling to an 11-0 victory over the Hillsboro Mavericks in a mid-afternoon clash at Shaffer Park.

Post 142 scored twice in the first inning, two more times in the fourth, and once in the fifth before finishing with a six-run explosion in the sixth.

Leading the way in hits was Weston Roop, who was 3-for-4 with three runs, four stolen bases and an RBI. Levi Coriell was 2-for-2 with a double, two runs and one RBI. Lane Mettler also finished 2-for-2, while Kannon Pack was 1-for-3 with an RBI and a double.

Michael Goodman and Jerrod Tackett each produced two RBIs. Goodman was 1-for-4 with a double, a run, a stolen base. Tackett also produced a hit.

Derek Eblin started on the mound and earned the win. In four innings of work, he didn’t allow a hit and struck out nine batters. Levi Coriell added one inning of relief, giving up one hit, while striking out two and walking one.

“Derek threw the ball very well,” said Teeters. “It was a solid outing for him.”

After a brief break, it was back to action again for the Shockers with their second straight game of the day for a Saturday evening battle.

The offense continued to roll, powered by a four-hit day from Easton Lansing, to the tune of a 6-1 win over Portsmouth Post 23.

Lansing served as the catcher for the game, and when it was his turn to bat, he made the most of his opportunities, going 4-for-4 with two runs and two RBIs.

Lansing started the offense in the top of the third inning by leading off with a single. J.T. Barnett and Michael Goodman each followed with singles to fill the bags. Then Kannon Pack was hit by a pitch to push Lansing across the dish.

Post 23 briefly tied the game in the bottom of the third inning, using a walk and a single to plate a run. But Waverly didn’t allow the 1-1 tie to linger.

In the top of the fourth inning, Roger Woodruff drew a one-out walk, took second on a passed ball, went to third on a sacrifice bunt from Logan Maynard and scored on an RBI single from Lansing, 2-1.

Two more Waverly runs came across in the top of the fifth inning. Pack sparked the offense with a two-out double, scoring on a single from Lane Mettler, who was serving as the designated hitter. Ben Flanders followed with a single to push Mettler to second. Then Woodruff had the next base hit, sending Mettler the rest of the way home, 4-1.

Lansing provided his third hit of the game to lead off the top of the sixth, going to second on a wild pitch. Barnett followed with the next hit, sending Lansing to third. Weston Roop provided a sacrifice fly to allow Lansing to score, pushing the advantage to 5-1.

Flanders led off the top of the seventh inning with a double. He went to third when Woodruff provided a bunt single, scoring the final run when Lansing had the final hit of the 6-1 win.

Following Lansing’s four-hit, two-RBI day, Flanders, Woodruff and Mettler all provided two hits for the Shockers. Pack was 1-for-2 with a double, one RBI and a run. Roop didn’t have a hit, but he generated two RBIs. Michael Goodman also finished 1-for-4.

Jacob Mathews started and pitched six innings for the win, giving up one run on four hits, while striking out six and walking one. Woodruff worked the final inning and struck out the first two batters he faced before getting the final one to hit a fly ball to Barnett in right field to end the game.

“Jacob Mathews was outstanding on the mound. The Mathews household I’m sure is very proud of that outing, as they should be,” said Teeters.

“The approach today was a huge improvement. I’m very proud of our team. It’s nice to sweep a double-header today and put ourselves in a position to get to the championship game.”

A Sunday morning battle didn’t go the way the Waverly Post 142 Shockers hoped, suffering a 14-0 loss to the Chillicothe Post 757 Colts to wrap up play in the Hillsboro Wood Bat tournament.

The Shockers had some opportunities offensively, but they couldn’t overcome multiple errors defensively that allowed the Colts to pile up runs.

Chillicothe scored five runs in the second innining, four more in the fifth, and five in the sixth to take the game 14-0.

Of the five runs surrendered early with Waverly starter Mason Ratcliff on the mound, just two were earned. Ratcliff gave up four hits in 3.1 innings of work, while striking out two and walking three. Logan Maynard and Jerrod Tackett closed the game out for the Shockers in relief.

“Mason had a nice start,” said Teeters. “It’s unfortunate our defense didn’t support him. It snowballed after that. We just didn’t show up to play.”

The Shockers will play Chillicothe Post 757 again on July 2 at 6 p.m. at Piketon High School. That game was originally scheduled for Tuesday, June 23, but it was postponed following a late afternoon rainstorm.

The Shockers will be back in action again at Piketon High School Wednesday evening vs. Portsmouth at 6 p.m.

The weekend will be filled with more tournament action as the Shockers head to Chillicothe to play in the 2020 Jim Jadwin Memorial Tournament. Waverly will play two games on Friday, June 26, starting at Hoffman Field in Mary Lou Patton Park at 11:30 a.m. versus Hillsboro. The second game is set for 4:30 p.m. at V.A. Memorial Stadium against Ashland.

On Saturday, June 27, Waverly will return to Hoffman Field to face Athens at 11:30 a.m. Then at 5 p.m., it will be back to V.A. Memorial Stadium to take on Greenville. On Sunday, seed play will begin at 9 a.m. to determine which two teams will play for the championship at V.A. Memorial Stadium at 12 p.m.