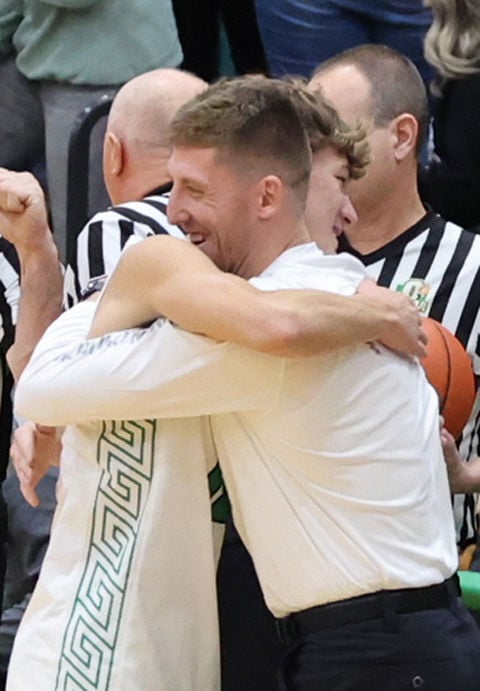 Brothers Kolten Miller, a senior basketball player at Western, and Kyle Miller, the head boys basketball coach at Piketon High School, share a hug after Kolten Miller was announced as a starter for the game between the two teams. 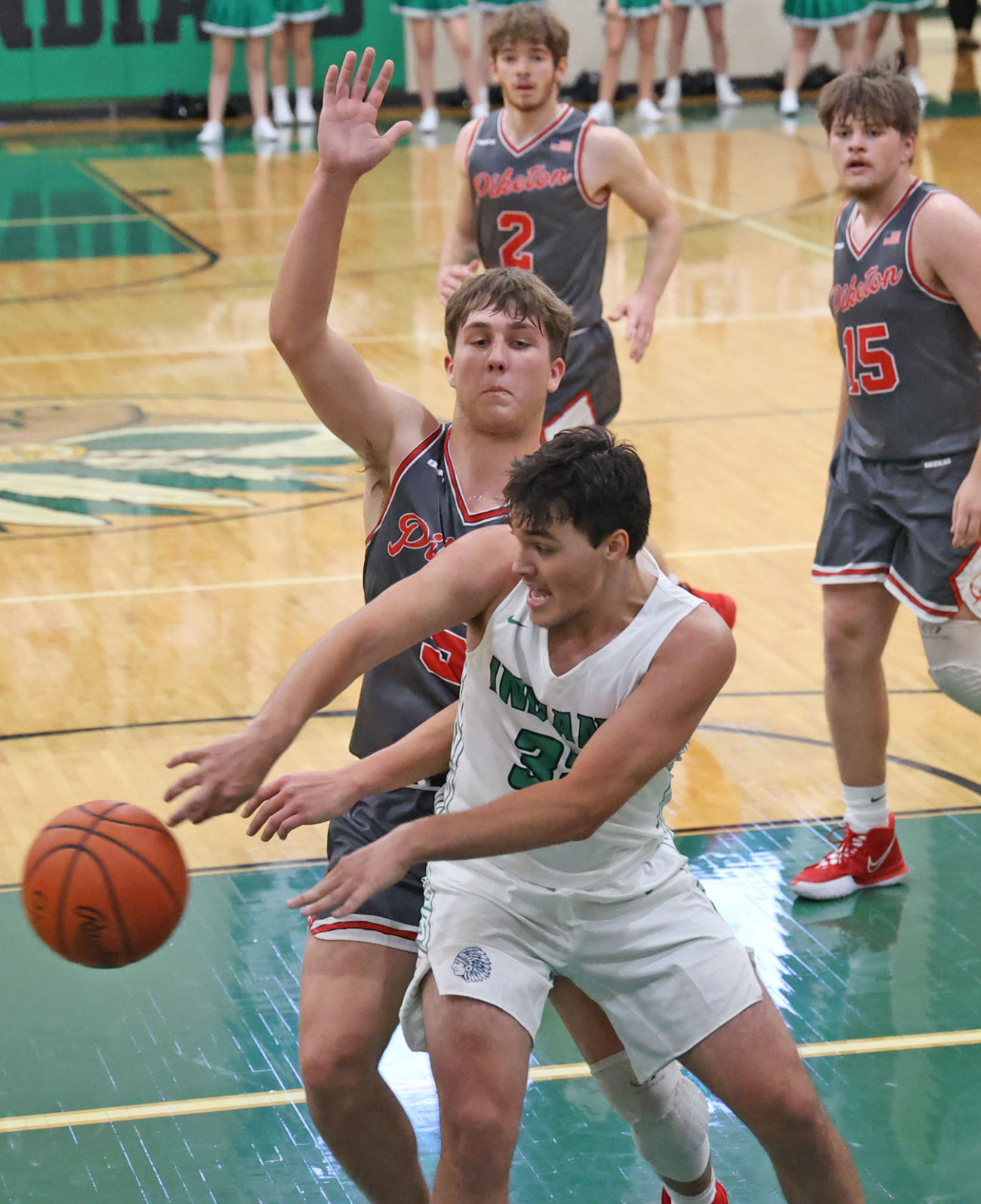 Western senior Gavin Myers opts to dish the ball out to a teammate with Piketon senior Tra Swayne guarding him tightly in the paint. The two teams played in the second game of the Tip-Off Classic at Western High School on Tuesday evening.

Brothers Kolten Miller, a senior basketball player at Western, and Kyle Miller, the head boys basketball coach at Piketon High School, share a hug after Kolten Miller was announced as a starter for the game between the two teams.

Western senior Gavin Myers opts to dish the ball out to a teammate with Piketon senior Tra Swayne guarding him tightly in the paint. The two teams played in the second game of the Tip-Off Classic at Western High School on Tuesday evening.

In the second game of Tuesday night’s Tip-Off Classic, it was time for the hosting Western Indians to do battle with Pike County opponent Piketon.

Prior to that game, a Western High School Athletic Hall of Fame induction ceremony was held (see an upcoming edition for more details, including a story and photos).

When play began, Western started strong and continued that effort all the way to a 58-33 triumph over the Redstreaks.

In the post, Western’s Chase Carter started the night with back-to-back buckets to give the Indians a lead they never relinquished. Piketon senior Levi Gullion provided his team’s first point from the line, followed by the first bucket shortly after, 4-3.

Then Western took off with a barrage of shots. Noah Whitt scored on back-to-back possessions. Next, Carter hit from three-point land. Drew Haggy added two more three pointers and then a three-point play, scoring the last nine points of a 16-0 run that saw Western go up 20-3.

Carter pushed the lead to 20 with another triple to start the second quarter before Piketon’s Jayden Thacker had an answering trey. The Indians spread the wealth between players by going on another 9-2 run to go up 32-8. Then the Streaks tallied the last five points with another free throw from Gullion and back-to-back buckets from Declan Davis, making the score 32-13 at the break.

Piketon senior Brady Coreno had the first trifecta of the third quarter. A few minutes later, Whitt connected on the first bucket of a 14-2 run for the Indians. Whitt later added a three-pointer between two trifectas from Reed Brewster. Kolten Miller capped it with a final bucket, increasing the lead to 46-18. Redstreak Brent McGuire broke through with a triple before Carter had the final basket of the quarter, 48-21.

Both teams had two additional players break into the scoring column in the final quarter. For Western, Sean Kerns had a three-pointer and Wyatt Grooms hit inside. For the Redstreaks, Gabe Lamerson scored in the post and Owen Armstrong hit from long range. Western finished with the 58-33 win.

It was the first official game of the year for the Redstreaks, who are still trying to find their basketball legs after a tournament run during the football season. Levi Gullion and Brent McGuire each scored eight points.

“We are still trying to find a primary ball handler that we trust. That’s obviously an issue we are trying to solve,” said Miller.

“Western will be good. They overwhelmed us with their ball pressure and how they are able to attack from the perimeter. That’s a credit to Coach (Doug) Williams and the staff. In high school basketball, if you can be the team that makes the other team consistently uncomfortable on both ends of the floor, you probably have a decent chance of winning those games. We were uncomfortable defensively and offensively. They shot 11-of-17 from three-point range. That’s tough.”

The game served as a special moment for Kyle Miller, now the head coach at Piketon, and Kolten Miller, a senior for the Indians. The two shared an embrace prior to the game when Kolten Miller was announced as a starter. Kyle Miller was the head coach at Western for the 2016 regional tournament boys basketball team. So they had the opportunity to stand on the floor together during the Hall of Fame Ceremony.

So essentially the older brother and coach had to game plan for his younger brother, Kolten, who is the leading returning scorer for Western.

“It has been fun. Kolten has grown into his body. You can tell he is playing with supreme confidence. Kolten and the rest of those guys will be a handful in Division 4 in the postseason,” said Coach Kyle Miller. “Game planning for him was fun. It is weird putting his name on our scouting report. I try to make sure that there’s a certain separation of professionalism when I talk to our guys about him and don’t call him Kolten. We call him Miller No. 13. But they all know he’s my brother.”

Coach Miller is relieved that the Indians aren’t on the schedule again this season and there is no chance of them meeting in the postseason because they are in different divisions.

“I’m glad we don’t have to play against Kolten again, because he has turned into a good player,” said Kyle Miller. “Noah Whitt, Reed Brewster and Kolten were water boys for my team here at Western that went to the regional tournament in 2016. It has been fun watching them progress. Now I can just sit back and be a fan of theirs for the rest of the season.”

Noah Whitt finished with 12 points for Western, while Reed Brewster and Kolten Miller each had nine. Chase Carter also scored 12 and Drew Haggy had 11.

As for Kolten, he says he never knows exactly what to expect from his older brother.