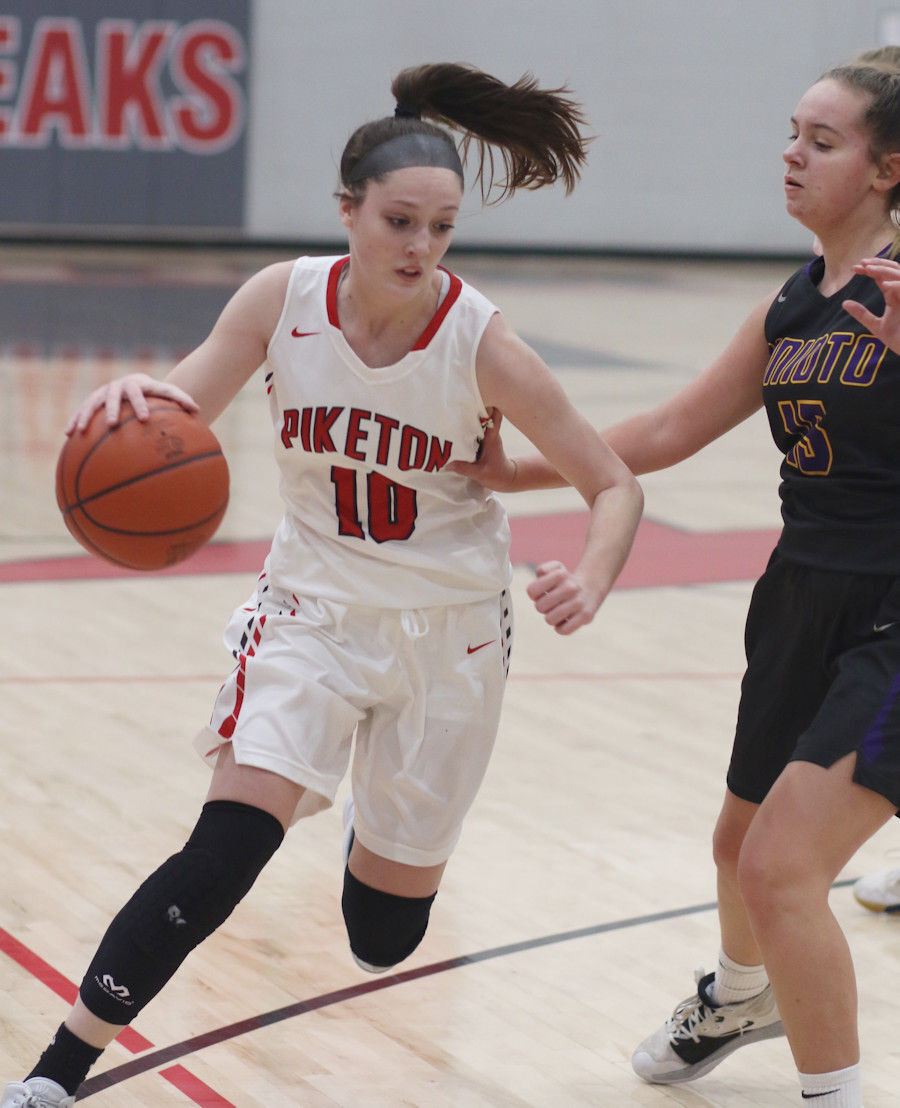 Piketon’s Bailey Vulgamore looks toward a teammate in the paint as she drives around a Unioto defender in Tuesday’s contest. 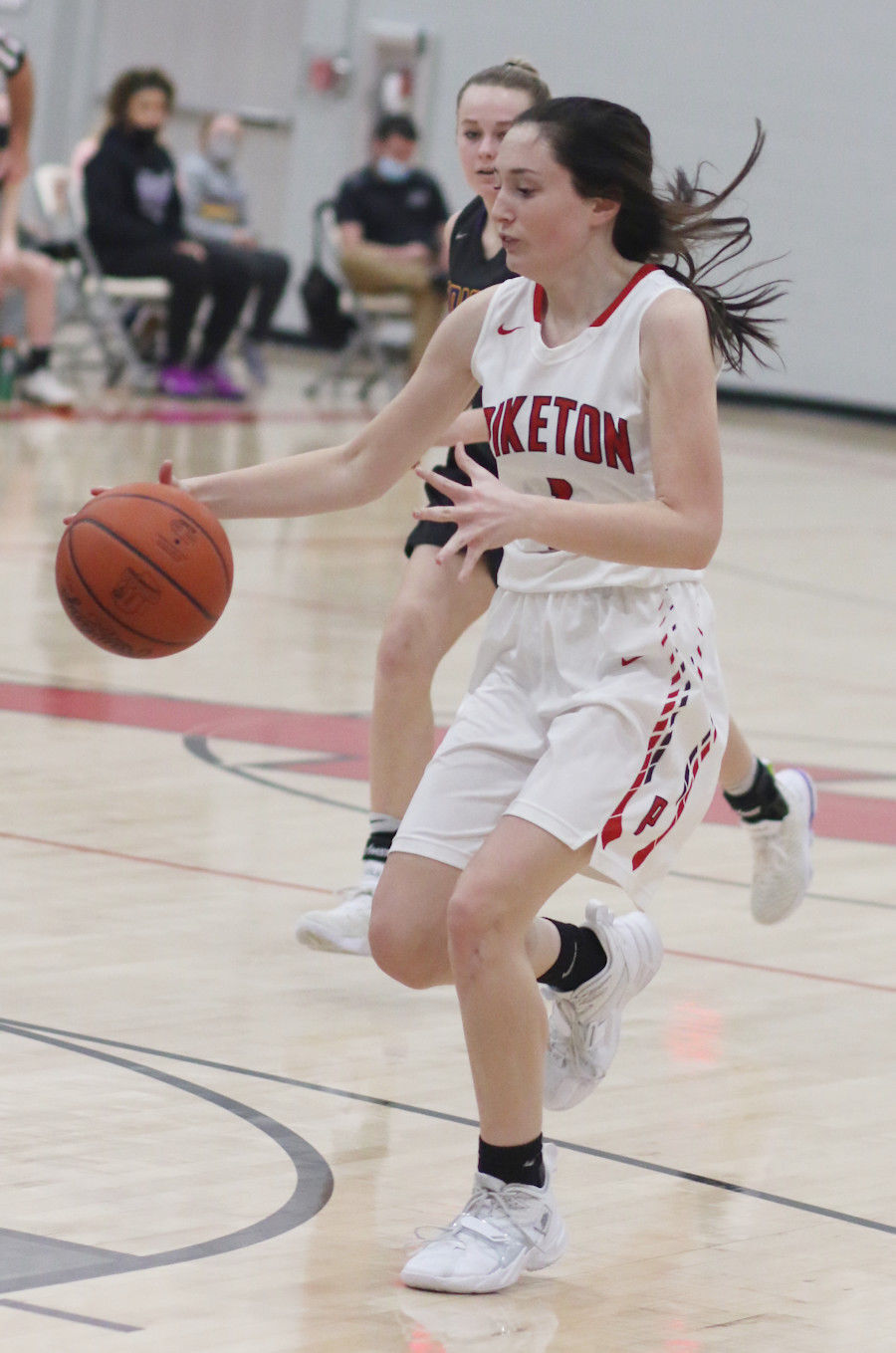 After making off with a steal, Piketon’s Savannah McNelly prepares to pass to a teammate on a fast break during the second half of Tuesday night’s game. 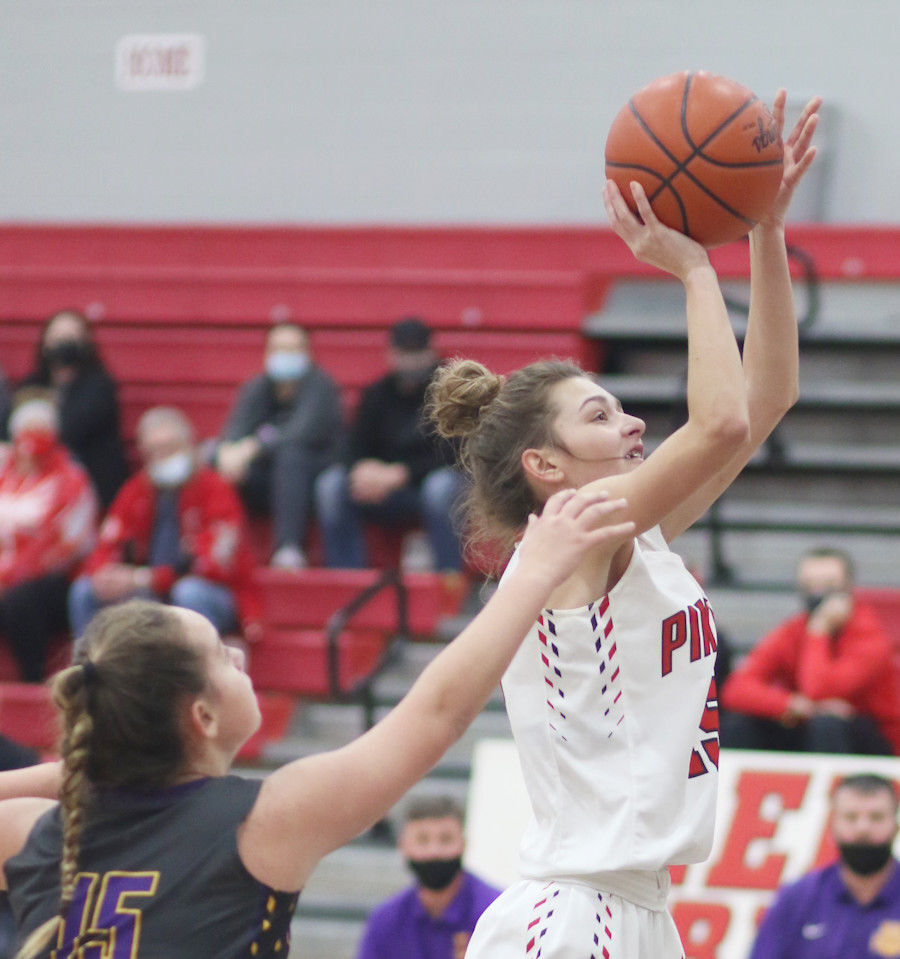 Piketon’s Jazz Lamerson gets between Unioto defenders for a jumpshot. 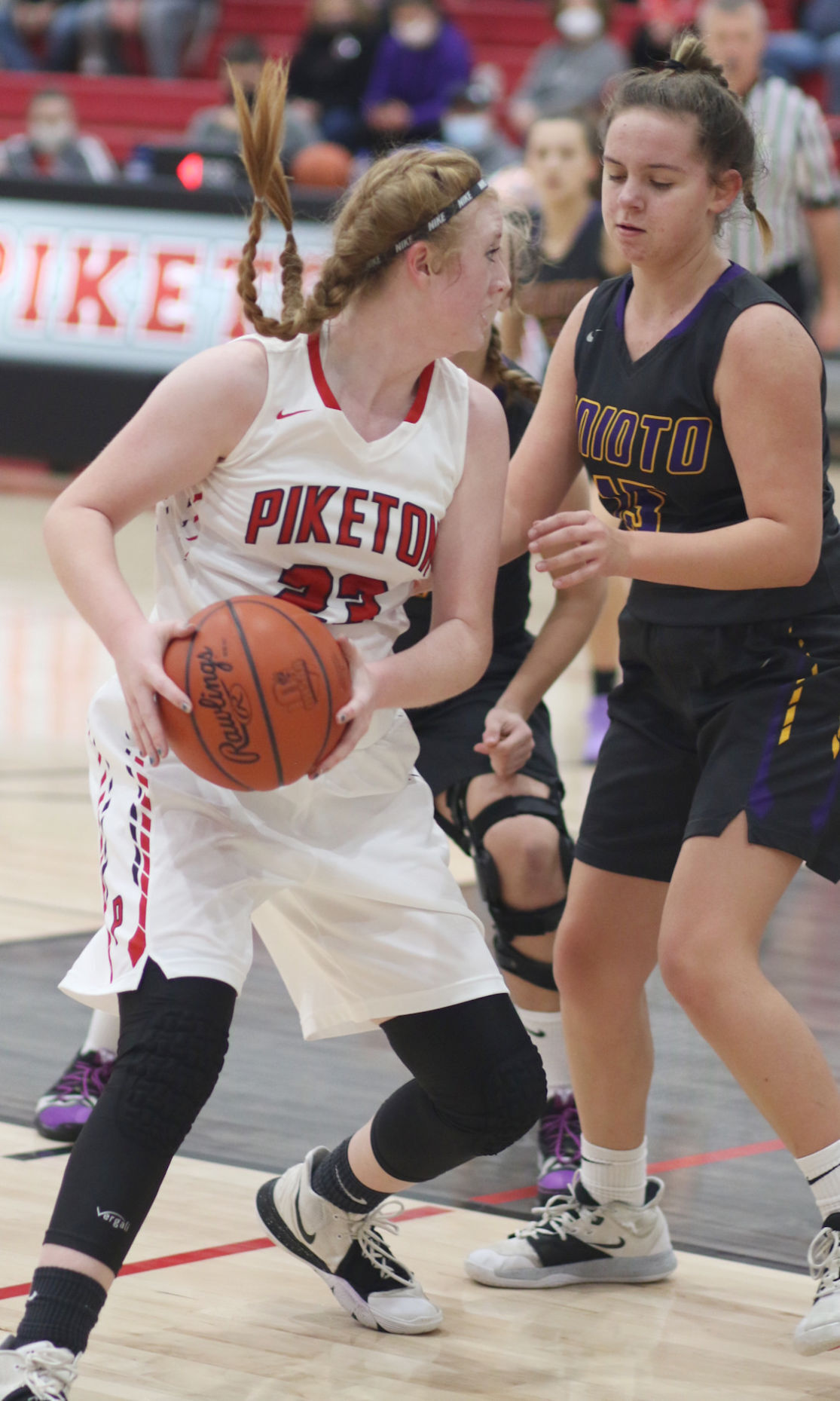 Piketon’s Bailey Vulgamore looks toward a teammate in the paint as she drives around a Unioto defender in Tuesday’s contest.

After making off with a steal, Piketon’s Savannah McNelly prepares to pass to a teammate on a fast break during the second half of Tuesday night’s game.

Piketon’s Jazz Lamerson gets between Unioto defenders for a jumpshot.

A long scoring drought was too much to overcome for the Piketon Lady Redstreaks Tuesday evening, as they were dealt a 37-32 loss by the visiting Unioto Lady Shermans.

Piketon’s Hayleigh Risner was able to put the first points on the scoreboard in the first 30 seconds. But the Lady Redstreaks went 0-for-7 from the floor and suffered six turnovers against Unioto’s press in the remainder of the first quarter. Over the same stretch, Unioto scored eight points early in the quarter before Piketon’s defense adjusted to slow the Lady Shermans some. But they still managed four more points before the quarter’s end, increasing the lead to 12-2.

For the first five minutes of the second quarter, Unioto’s only points came from Amelia Uhrig on the foul line, 14-2. Amaris Betts connected on a three-pointer for the first field goal with a little less than three minutes to go. Then Piketon’s Bailey Vulgamore was finally able to break her team’s drought, securing the ball after a teammate’s missed shot and scoring while drawing a foul. She swished the free throw to convert the old fashioned three-point play. Piketon’s Addison Johnson had the final bucket of the half on a drive, as the Lady Redstreaks trailed 19-7 at the break.

The third quarter was another slow start for both teams. But Piketon began breaking through and picking up the pace. Jazz Lamerson provided the first points for her team. Unioto had the answering basket before the Lady Redstreaks took off on a 9-2 run to end the half. Risner scored first. Then Vulgamore followed with back-to-back drives. Lamerson scored again before Addison Johnson had the final point of the quarter on the line. Piketon had pulled within five, 23-18.

In the fourth quarter, the Lady Shermans worked to pull away again, starting with a run to go ahead by 11, 35-24, by the midpoint. Piketon’s only points during that stretch came from a pair foul shots from Vulgamore and a nice post shot from Natalie Cooper.

Despite being down 11, the Lady Redstreaks tried to rally again. Junior Savannah McNelly provided several late steals, including one that she took for a layup, and also drew a charge from Unioto. After that burst, Piketon had cut the lead to six, 35-29.

In the final three minutes, the Lady Redstreaks had opportunities with their defense helping to force turnovers. But the only other shot they could hit came when Johnson connected on a three-pointer in the final minute. The Lady Shermans also had a final basket, staying ahead for the 37-32 win.

Neither team shot the ball well, but Unioto was just a little better. Turnovers were nearly even as well.

For Piketon, Vulgamore was the leading scorer with 11 points, including a 5-for-5 performance on the line. Johnson and Risner each added six points.

Unioto was led by Amaris Betts with nine points, followed by Paris Debord with eight and Uhrig with seven.

“You can’t score seven in the first half and win. We had shots. They didn’t fall,” said Piketon coach Brett Coreno.

“We just have to make some shots to get our confidence up. It has taken us too long to get the confidence back after tough games. It is just going to take time. I believe in these girls. They just have to realize that themselves.”

The Lady Redstreaks will be back in action Saturday evening in the Pike County Holiday Classic at Eastern. They will take on the Lady Eagles at 5:30 p.m. Waverly and Western will play at 8 p.m.