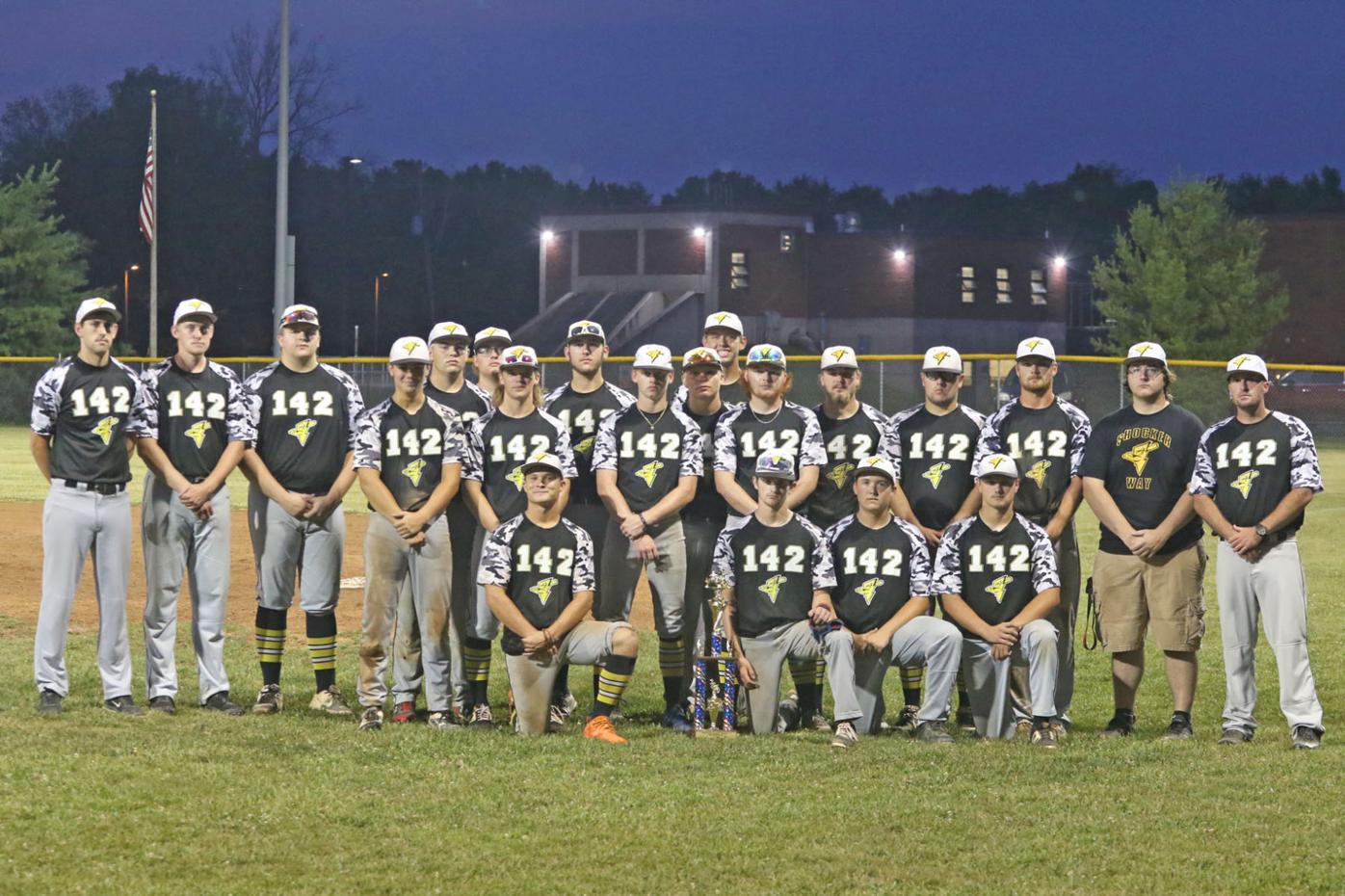 The Waverly Post 142 Senior Shockers posed for a final team photo at the conclusion of the Region 5 tournament Wednesday evening in Chillicothe. Five players will not return due to age restrictions, but the rest are eligible to do so.

Easton Lansing starts his slide into third base after doubling in the top of the third inning to drive in two runs and create a 5-2 lead. 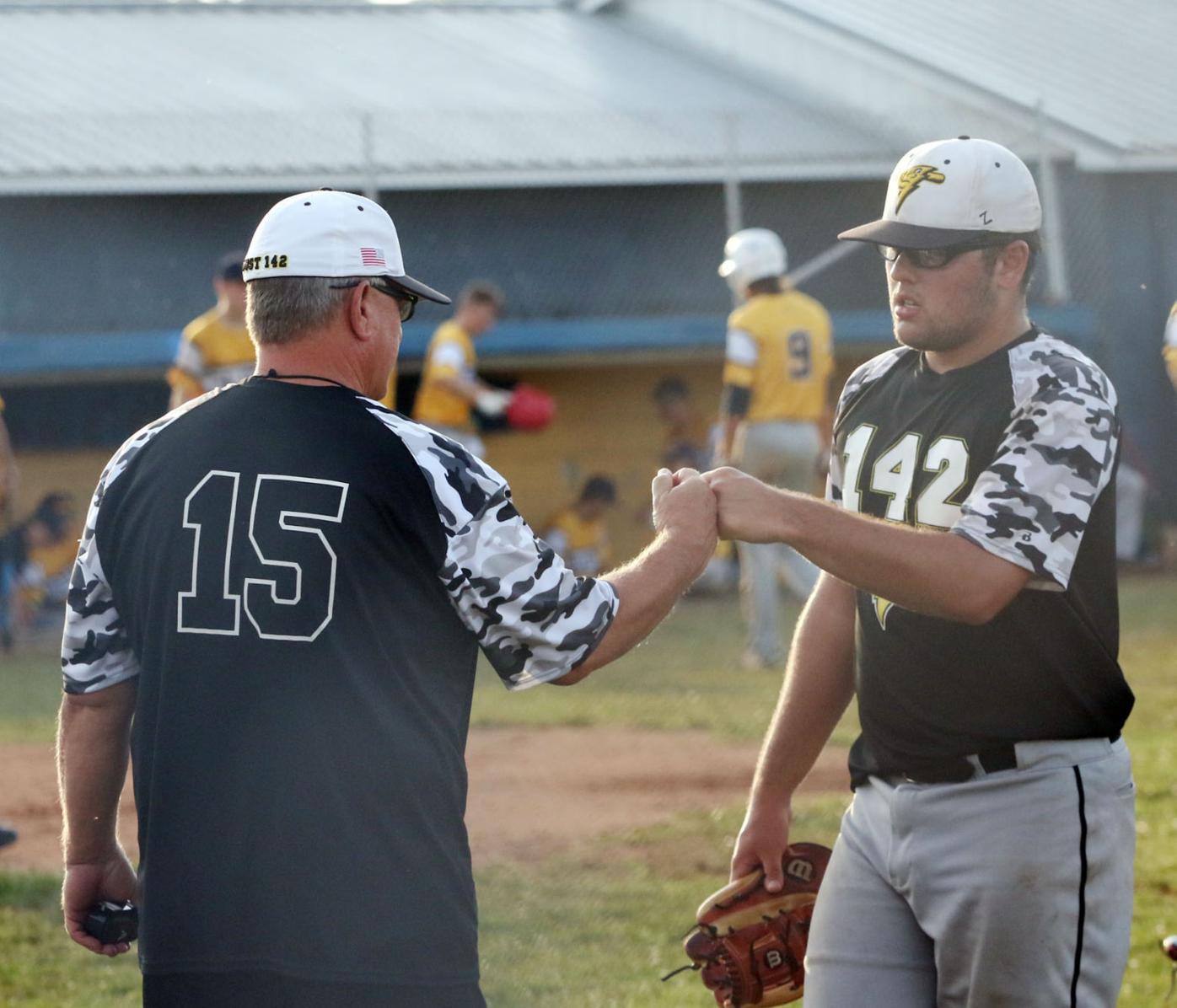 Derek Eblin is congratulated by assistant coach Tim Frederick after recording a big strikeout to end an inning in Wednesday’s game and hold the lead for the Shockers. 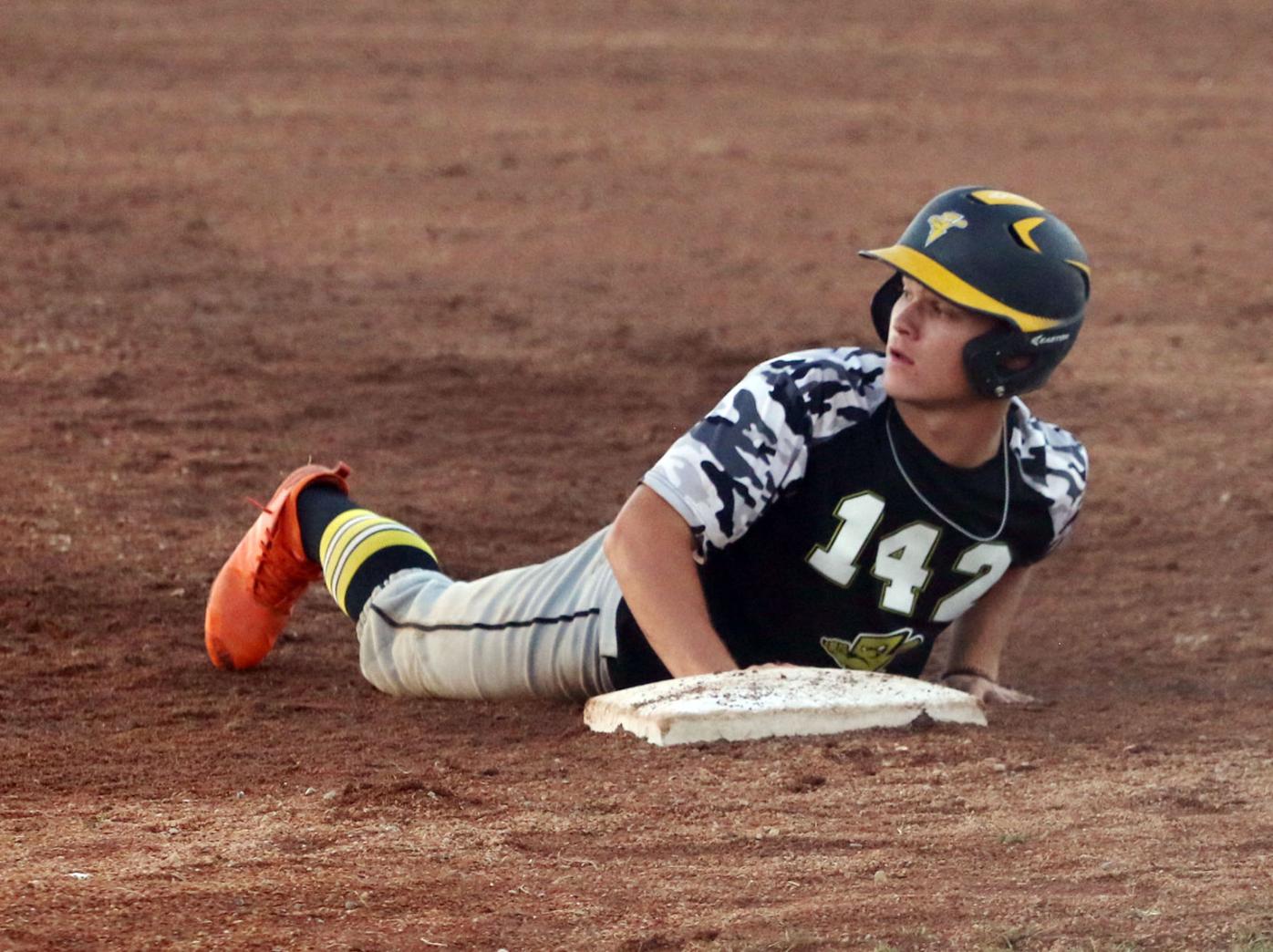 Michael Goodman dives back to first base to beat a pickoff attempt during Wednesday night’s game. 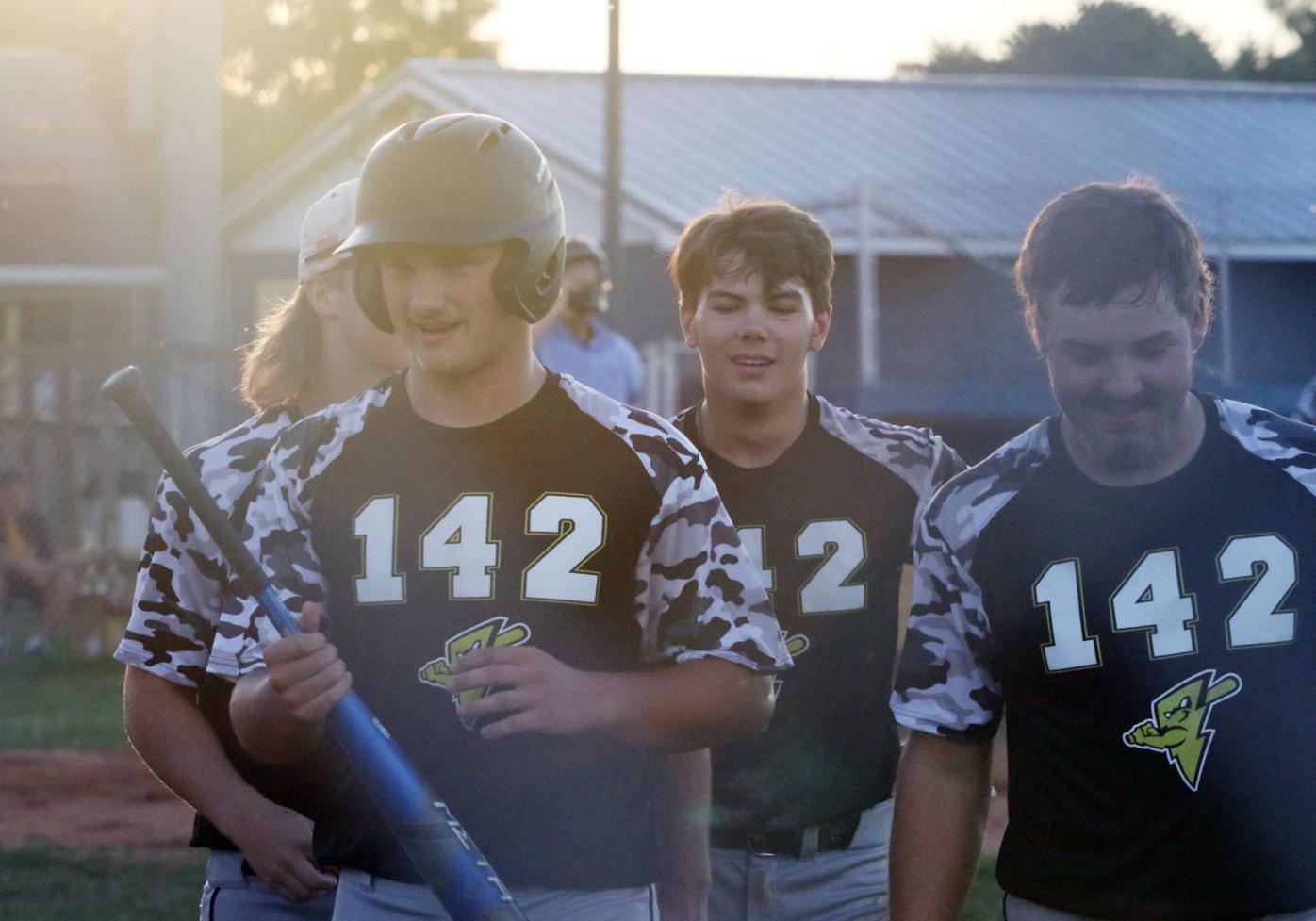 Lane Mettler smiles as he heads back to the dugout after being congratulated for his three-run homer in the top of the first of Wednesday night’s championship battle. 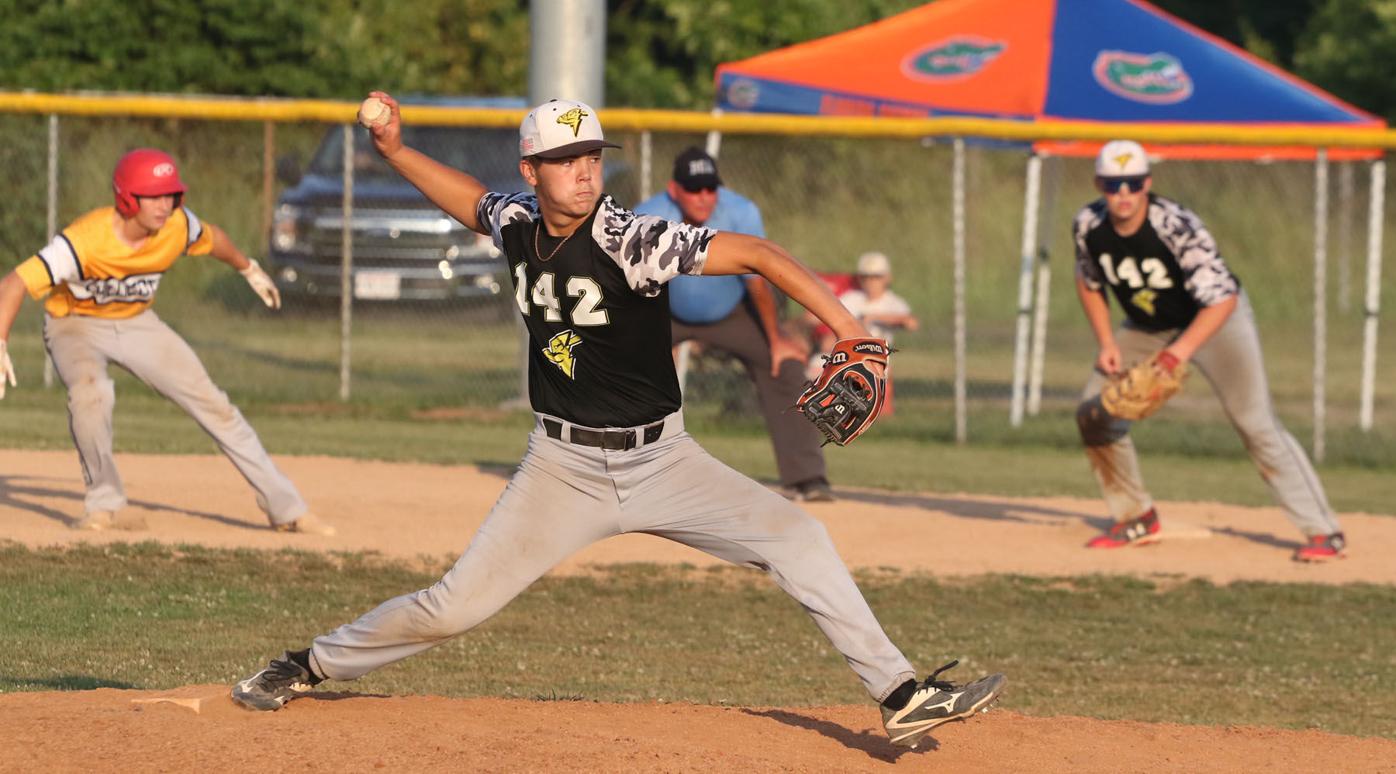 The Waverly Post 142 Senior Shockers posed for a final team photo at the conclusion of the Region 5 tournament Wednesday evening in Chillicothe. Five players will not return due to age restrictions, but the rest are eligible to do so.

Easton Lansing starts his slide into third base after doubling in the top of the third inning to drive in two runs and create a 5-2 lead.

Derek Eblin is congratulated by assistant coach Tim Frederick after recording a big strikeout to end an inning in Wednesday’s game and hold the lead for the Shockers.

Michael Goodman dives back to first base to beat a pickoff attempt during Wednesday night’s game.

Lane Mettler smiles as he heads back to the dugout after being congratulated for his three-run homer in the top of the first of Wednesday night’s championship battle.

A pair of high-scoring baseball games on Tuesday and Wednesday nights saw the local American Legion baseball season come to a close with the Chillicothe Post 757 Colts winning the Region 5 tournament title over the Waverly Post 142 Shockers.

The Shockers had the upper hand going into the championship tilt Tuesday evening, having played one less game than their opponent in the double elimination tournament. But the Colts still had their power at the plate and used a late burst to seal the game 8-7. That meant the two teams had to return to action Wednesday night for a final game to decide the tournament winner. Once again, the contest belonged to the Colts, who took control in the late innings to win 11-8 and grab the championship.

In an ordinary year, the tournament would have been played at V.A. Memorial Stadium. This year, it was played at the Colts’ home field, J.W. Hoffman, in Mary Lou Patton Park. Normally, the winner of the Region 5 tournament would go on to the state tournament. However, the Ohio Legion organization did not officially sanction baseball this year due to COVID-19, after the national organization announced it would not be holding the American Legion World Series. That left teams to make their own schedules if they still wanted to play.

Recapping preliminary tournament play, the first game of Sunday’s action in the Region 5 tournament saw Portstmouth Post 23 knock off the hosting and top-seeded Chillicothe Post 757 Colts by a score of 4-3. The Portsmouth players then had time to take in the action, as the Waverly Post 142 Shockers started their battle with Hillsboro Post 129, to see which team Portsmouth would play in the nightcap. Waverly claimed the early lead against Hillsboro, and ultimately won 3-1. Then the Shockers went right back to action against Portsmouth, fighting up to an eighth-inning tie before winning in a walk-off, 2-1.

Since they were the only team in the winners’ bracket, the Shockers had the day off Monday, while three remaining teams — Portsmouth Post 23, Chillicothe Post 757, and Hillsboro Post 129 — had to play each other to determine which one would square off with the Shockers for the championship.

Hillsboro Post 129 and Chillicothe Post 757 met in the 3 p.m. battle, fighting their way to an 8-8 tie through seven innings. Chillicothe was able to break the tie and win on a walk-off in the bottom of the eighth inning, taking the game 9-8.

The Post 757 Colts then used that momentum to blast past Portsmouth in the second game of the night, winning 14-3 in five innings. That set the Colts up to battle the Shockers on Tuesday night for the title.

Waverly suffered some rough losses to Chillicothe earlier in the year, going 0-4 to the Colts during the regular season. Yet, each game against Chillicothe was an improvement over the previous one. That meant the Shockers delivered their best performances yet against Post 757, but they still came up short. In both tournament games, holding a lead against the Colts was a tough task.

In Tuesday night’s tilt, the Colts had a strong start, using three hits to stake a 2-0 lead. That lead didn’t hold though as the Shockers produced an answer.

The Shockers had their strongest outburst against Chillicothe in the top of the third inning, unloading with five runs. Jake Thornsberry started it with a one out walk before Michael Goodman singled behind him. Weston Roop doubled down the left field line to plate Thornsberry, but Goodman was tagged out at third. But Chillicothe’s early lead was cut in half.

The rally wasn’t over. Kannon Pack drew a walk, and Derek Eblin singled, allowing Roop to score and tie the game, 2-2. Lane Mettler reached base on an error that allowed Pack to score. The final big hit came from Easton Lansing, who doubled to right field, but he was thrown out advancing to third. However, the Shockers had a 5-2 lead, as Lansing’s hit plated Eblin and Mettler.

But no lead was safe with Chillicothe. Waverly was able to hold it through the next two innings. Then the Colts capitalized on some errors and pitching struggles, adding a pair of runs to get within one, 5-4. The Colts used that momentum to deliver more hard hitting in the bottom of the sixth inning, resulting in four additional runs that put them ahead 8-5.

Down to their final chance, the Shockers attempted a rally in the top of the seventh inning. Roop and Pack both drew one out walks, setting the table for Eblin to drive them home with a double. But Eblin was left standing at second, as pitcher Kyle Wingo came back with a pair of strikeouts to preserve the lead and seal the 8-7 win for his team.

Eblin, Waverly’s cleanup hitter, finished his night at the plate with three RBIs on a 2-for-4 performance that included a double. Lansing generated two RBIs with his double, while Roop was 1-for-3 with a double and an RBI. Thornsberry also doubled in the fourth inning and was the only Shocker base runner that inning.

Both teams returned to action Wednesday evening in a delayed start following a rainy afternoon. Both teams had used up a lot of pitching, resulting in a high-scoring battle. But the Colts managed to take control late once again and win, 11-8.

This time, the Shockers struck first in a big way with Lane Mettler delivering a three-run homer to left field to give Post 142 an instant 3-0 lead. Prior to Mettler’s home run, the inning started with back-to-back singles from Michael Goodman and Weston Roop. A pair of strikeouts followed before Mettler took care of business by homering to left field.

Mettler extended the lead once again, doubling off the center field fence to plate Kannon Pack, who had reached base on a fielder’s choice, 4-2.

A lead against the Colts never seems safe. Chillicothe was able to take its first lead of the game with a five-run fourth inning with Ryan Schwartz delivering a three run triple to lead the charge. At that point, Post 757 had moved ahead 7-4.

Once again, the Shockers answered. Michael Goodman led off the top of the fifth with an infield single to start the rally before Roop followed with a double. Pack added a sacrifice fly to plate Goodman, cutting the lead to two, 7-5. Roop eventually came home on a wild pitch. Next, Mettler reached via error, getting all the way to second. Then Mettler scored on a single from Easton Lansing, tying the game at 7-7.

Chillicothe moved ahead in the bottom of the frame with two more runs, 9-7, taking control for good.

Waverly rallied for a final run in the top of the sixth inning when Jake Thornsberry reached base on an error, and later crossed the plate when Derek Eblin drew a bases-loaded walk. A groundout ended the rally with the Shockers down one, 9-8.

Extending their advantage, the Colts produced their final two runs in the top of the sixth, 11-8. Ben Flanders was the final Post 142 runner to base, working a one-out walk in the seventh. But a strikeout and a flyout brought the game to a close.

The Shockers end the year at 14-11 overall with six of those 11 losses coming from the Chillicothe Post 757 Colts. Post 142 is the regular season South Central Ohio League champions and the Region 5 Runner-Up.

“It’s tough to end the season this way,” said Waverly Coach Jonathan Teeters. “I told the team after the game I felt like we have been playing some of our better baseball lately. This is one of the more tight knit groups we’ve had — a lot of fun and an honor to coach these guys.”

Even though the state American Legion did not sanction an official season, the support was there from local entities.

“We want to thank our Legion Post 142 and the SAL, along with our other local sponsors for making this summer possible,” said Teeters. “All things considered our guys got a lot of reps they missed out on in high school, and we have several who are going to college to play baseball as well.”

The Shockers will lose five players from the team due to age restrictions.

“Kannon has been with us for three years, and to have Jacob, Cruz and Lane play with us this summer was a pleasure. They’re all great kids with great families. We wish them nothing but the best. And ‘Goody’ was a motor and the heart of our team. We enjoyed him and his commitment to the team.”

Yet, the cupboard is not bare. It will be fully restocked with strong returning players as well as those moving up from the Junior Shockers.

“Going forward I’m excited for next summer. The interest in our county has picked up, which is exciting. To have as many Piketon and Waverly players playing in our program (Junior and Senior) is outstanding,” said Teeters.

“We encourage local athletes who have a desire to better their game and potentially play college baseball to let us at 142 be an asset to help you reach those goals. I feel our program over the last 10-plus years has done that.”