Thanks to a strong throw from sophomore center fielder Alex Boles, Waverly catcher J.T. Barnett had the ball in his glove in plenty of time to make a tag at the plate for a big out in Friday’s 2-1 win. The tag kept the game knotted at 1-1. Later, Barnett had the go-ahead homer to seal the victory. 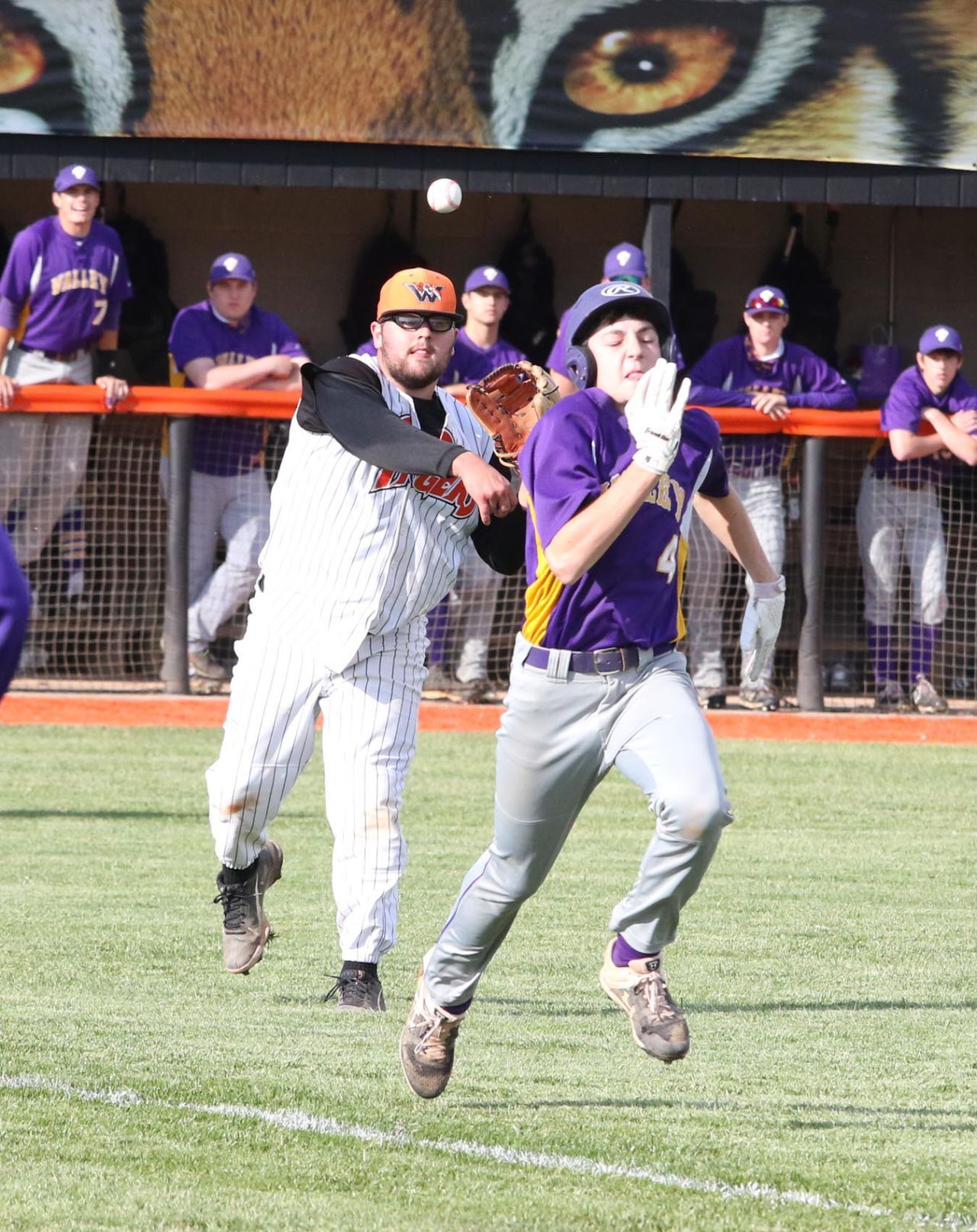 Waverly senior pitcher Derek Eblin fires a throw to Ben Flanders at first base to record an out on a Valley sacrifice bunt in Friday night’s 2-1 home victory for Senior Night. Eblin pitched for the win and also had a hit. 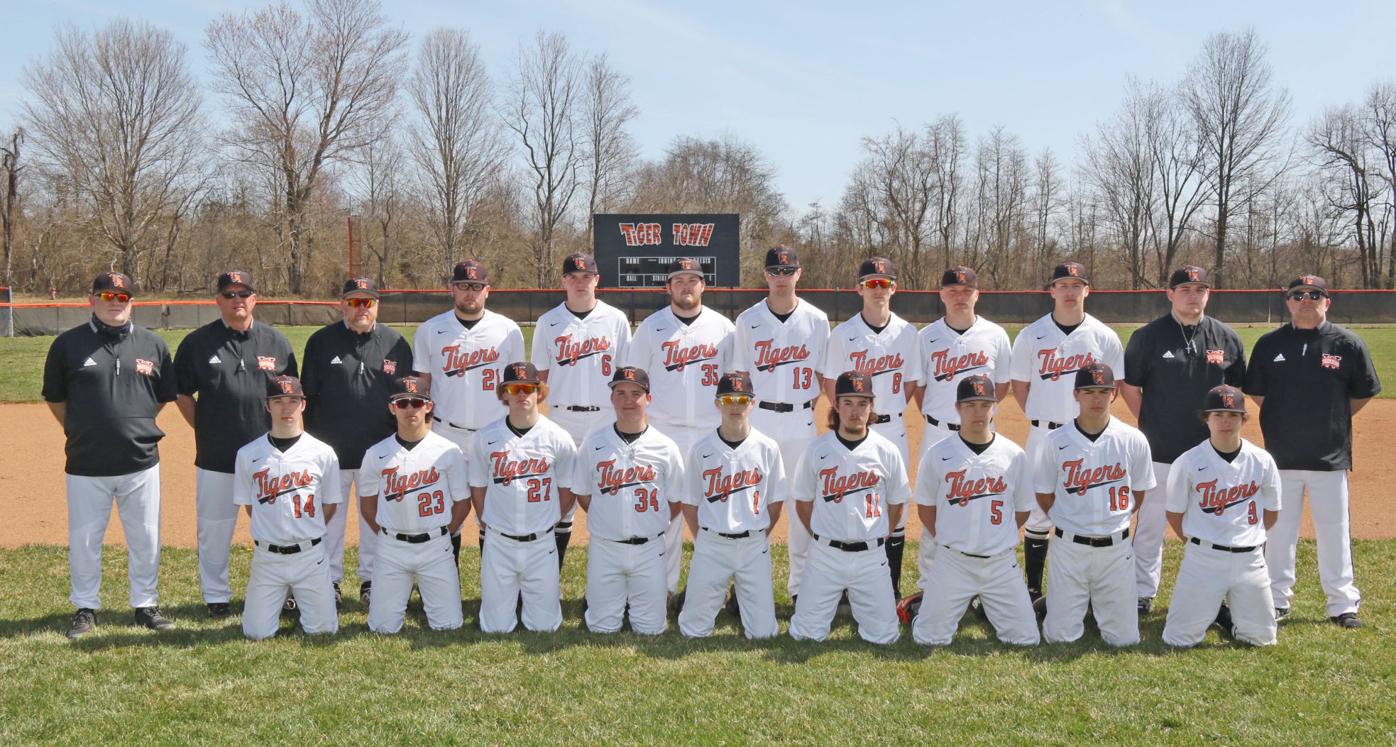 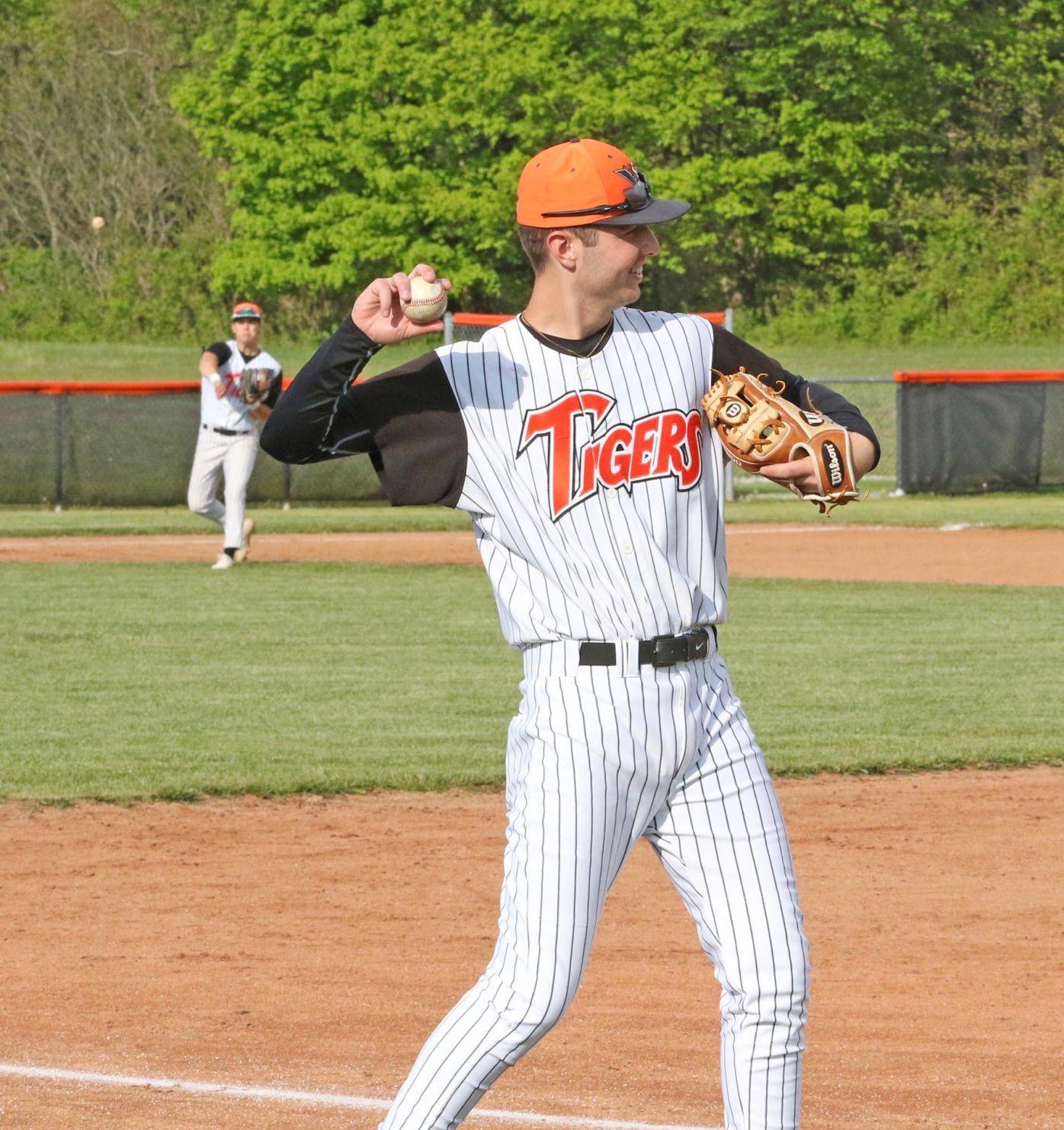 Waverly senior Haydn’ Shanks throws with Waverly’s right fielder Peyton Harris between innings. Shanks has helped his team in other ways throughout the season despite not being able to play after having knee surgery.

Thanks to a strong throw from sophomore center fielder Alex Boles, Waverly catcher J.T. Barnett had the ball in his glove in plenty of time to make a tag at the plate for a big out in Friday’s 2-1 win. The tag kept the game knotted at 1-1. Later, Barnett had the go-ahead homer to seal the victory.

Waverly senior pitcher Derek Eblin fires a throw to Ben Flanders at first base to record an out on a Valley sacrifice bunt in Friday night’s 2-1 home victory for Senior Night. Eblin pitched for the win and also had a hit.

Waverly senior Haydn’ Shanks throws with Waverly’s right fielder Peyton Harris between innings. Shanks has helped his team in other ways throughout the season despite not being able to play after having knee surgery.

Winning many low-scoring defensive battles has been a storyline for Waverly’s varsity baseball team in 2021.

It took some heroics from a junior to give the Tigers a 2-1 victory over Valley on Senior Night, which was held Friday, May 7.

Junior catcher J.T. Barnett stepped to the plate in the bottom of the sixth with one out. After one pitch went by as a ball, Barnett took a swing at the second, sending it deep into the trees behind the left center field fence for a solo home run. That broke the 1-1 tie and put the Tigers in line for a 2-1 win.

The only other scoring in the game came during the fourth inning when the Valley’s George Arnett worked a two-out walk, stole second and scored on a single from teammate Chase Morrow. That put Valley ahead 1-0.

The Tigers answered, starting when freshman shortstop L.T. Jordan led off with a double and took second on a wild pitch. J.T. Barnett delivered his first RBI of the game, sending Jordan home with a base hit to knot the game at 1-1.

Valley nearly plated a go-ahead run in the top of the fifth, but Waverly’s defense came up big. An error had allowed Valley’s Jace Copley to reach base safely with one out. The Indians moved him into scoring position at third base. Then Williams connected on a single to center field, but a speedy Alex Boles moved quickly for the Tigers, snagging the ball and firing a strike to Barnett, the catcher, for the out at the plate. Barnett had the ball in hand well before Copley arrived, keeping the score at 1-1.

“I thought this game had it all with great pitching, great defense, and a home run, but we added throwing the go-ahead run out at the plate,” said Waverly Head Coach Jeff Noble. “To top it off we had former player Bryce Tackett ride his horse from foul pole to foul pole with the American flag to honor America before the game, plus it was Senior night. Hats off to our seniors — Derek Eblin, Ben ‘Colonel’ Flanders, Weston Roop and Haydn’ Shanks — and our team on a great team win.”

Senior ace Derek Eblin (4-2) picked up the win on the mound with a complete game effort. He gave up four hits and struck out 10 batters. He also finished 1-for-3 at the plate.

J.T. Barnett was 2-for-3 with his homer, two RBIs and a stolen base.

“Leave it up to a junior to steal the thunder on senior night,” laughed Ben Flanders, who had a walk-off home run in a 1-0 win over Northwest two days earlier. Flanders talked about the moment when he hit his homer.

“After Dawson (Shoemaker) got out in the bottom of the sixth, I knew then, and said, ‘I’m hitting it out.’ The first pitch was a questionable strike. The next pitch couldn’t have been more down the middle. I knew it was out pretty quickly.”

Additional offensive statistics from the Valley win saw L.T. Jordan finish 1-for-3 from the plate with a double and a run. Dawson Shoemaker was also 1-for-2 with a stolen base.

Despite a gap in age, all of the Tigers play as a true team.

“A few of us got to play summer ball last year, so it was nice not to have a complete year off. But it is still hard. We have a lot of young guys. But we’ve played a lot of games and they are getting a lot of experience. We are rolling right now,” said Flanders. “We’ve meshed well as a team. It never hit me until now that we have 18 and 19 year olds starting on the same field as 14 year olds. That’s a four to five year gap, and we all get along great.”

Flanders, Eblin and sophomore Alex Boles have logged a lot of innings on the mound. But senior Weston Roop has also played a role in the pitching success.

“I’m more of a relief guy. I just come in when their pitch count gets up, or they aren’t throwing strikes,” said Roop. “They usually do pretty well and don’t need me. I haven’t had to toss to much.”

Senior Haydn’ Shanks has sat out all season due to having knee surgery in the winter months. Shanks has been with his team throughout the season and helps his teammates warm up between innings.

“It is their show this year. I got my time earlier in the year with football,” said Shanks. “It has been hard sitting out. I wouldn’t trade being here for anything else. These guys are special to be with and be around all of the time. I’m glad we’re having a good senior season. We are putting a good end into the year. Let’s get rolling in the tournament and get some wins.”

The interesting part of the success is that it seems to be a different player each night providing the big plays to keep the Tigers rolling.

“I told them they are a very special group. It is a different guy every night. We have a great dugout. We have had great pitching all year. These guys come out and do their work every day. They do their job on the field,” said Coach Noble. “After the game is over, they run, and then they fix the diamond. Tonight they get to eat cake (for Senior Night). It is very fitting for this bunch. They are very unselfish. It has been a pleasure to coach these guys and see how they matured throughout the year while winning games.”

Assistant Coach Tim Frederick agreed, saying, “It has been a special year. They are the cardiac kids. They never quit and never panic. They keep everything rolling.”

Not having the 2020 season could have been devastating for the Tigers, but they haven’t allowed it to phase them.

“COVID has hurt every team as far as missing reps last year, especially the younger players. But we found ways to win early. We have continued that. Hopefully the mindset will allow them to keep winning. They believe they can win and have confidence in each other. It is a different guy every day,” said Noble. “Waverly High School is rolling. We have a bunch of good sports and coaches. The kids are responding to what is going on here. You can’t take away from any sport. All of the sports are blossoming.

“We are thankful for our field. Everyone brags on it. I told the players to make sure they appreciate everyone, especially your parents. But you just don’t fall out of bed and have a field that looks like this. There are a lot of people making this happen. It is a pleasure to be able to coach right now.”

With the win, Waverly improved to 19-4 overall and 12-3 in Southern Ohio Conference Division II play.