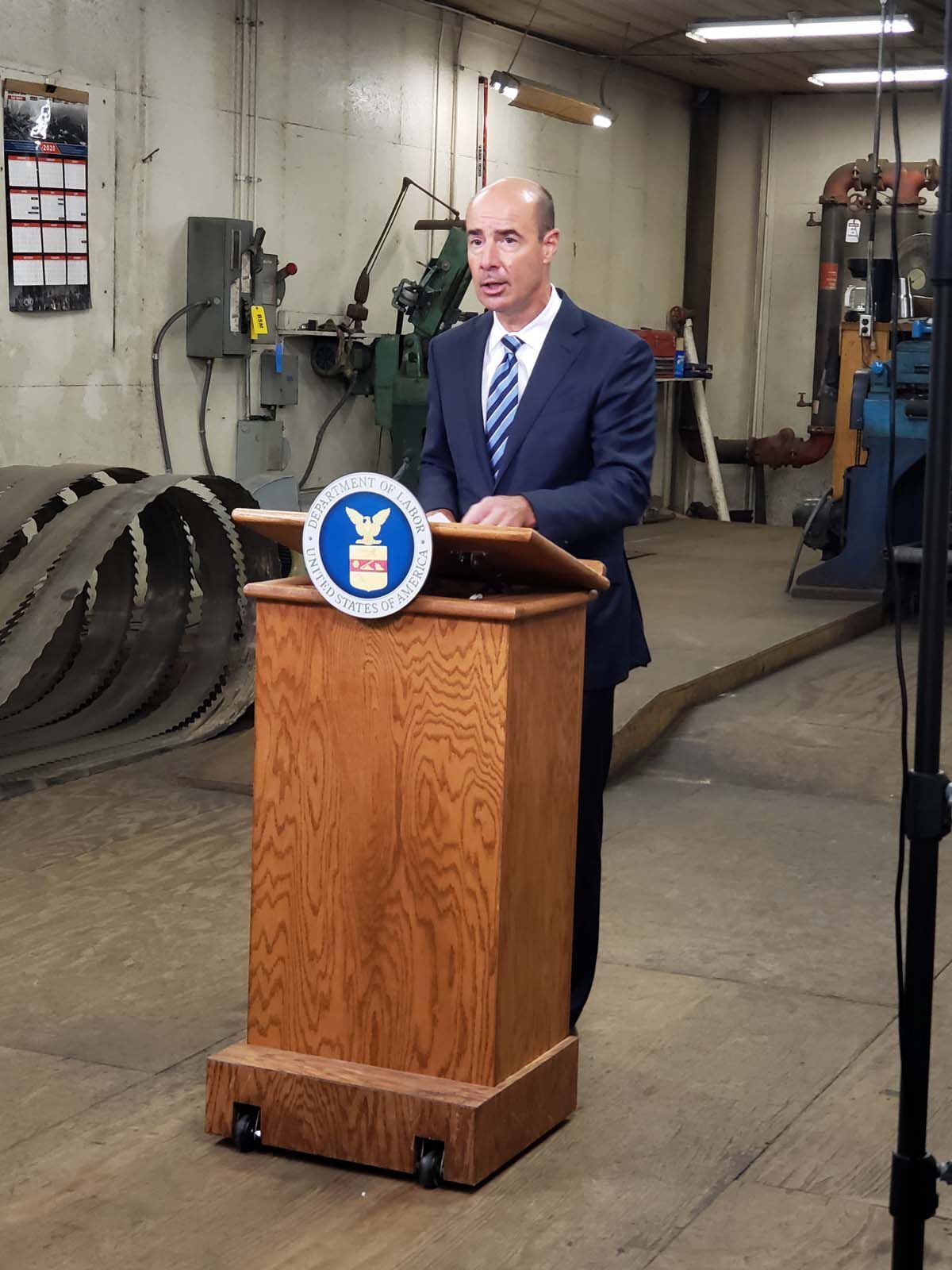 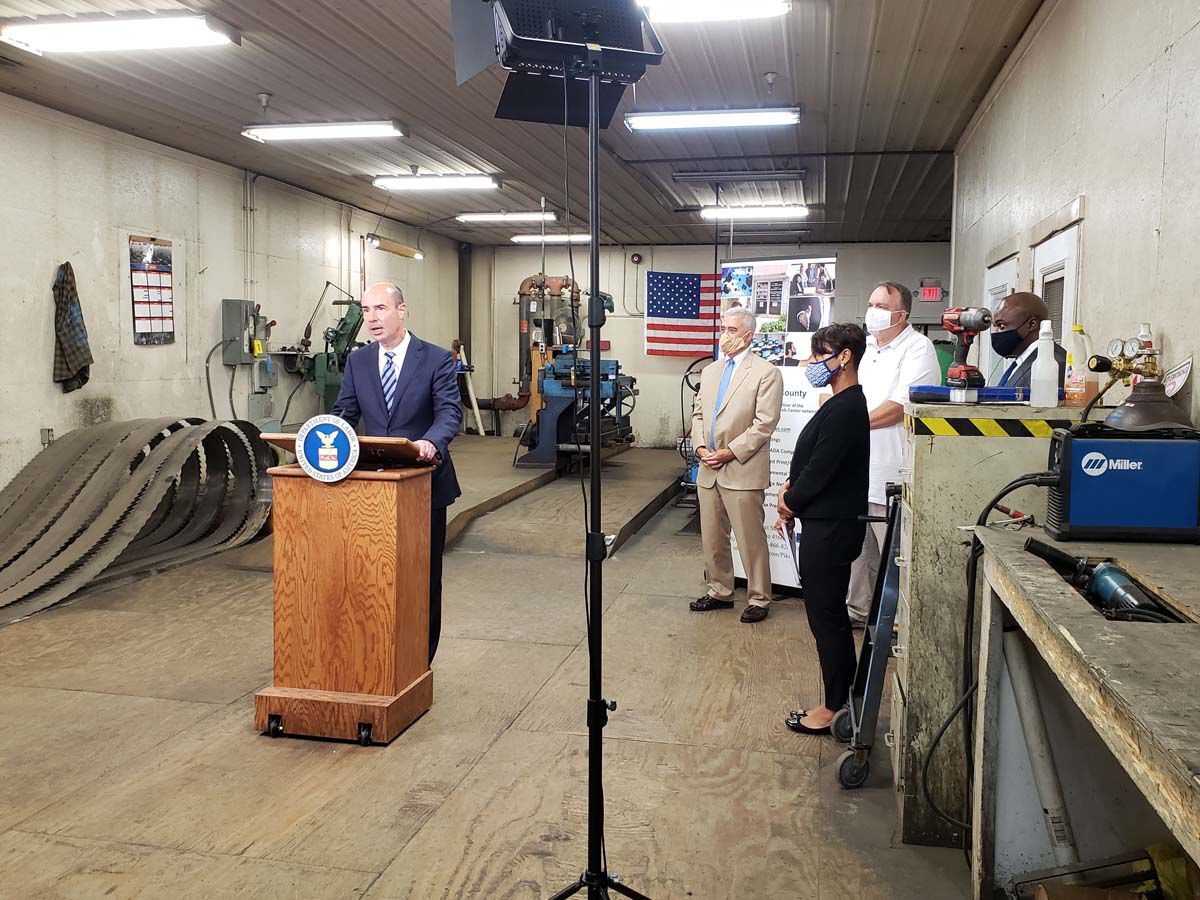 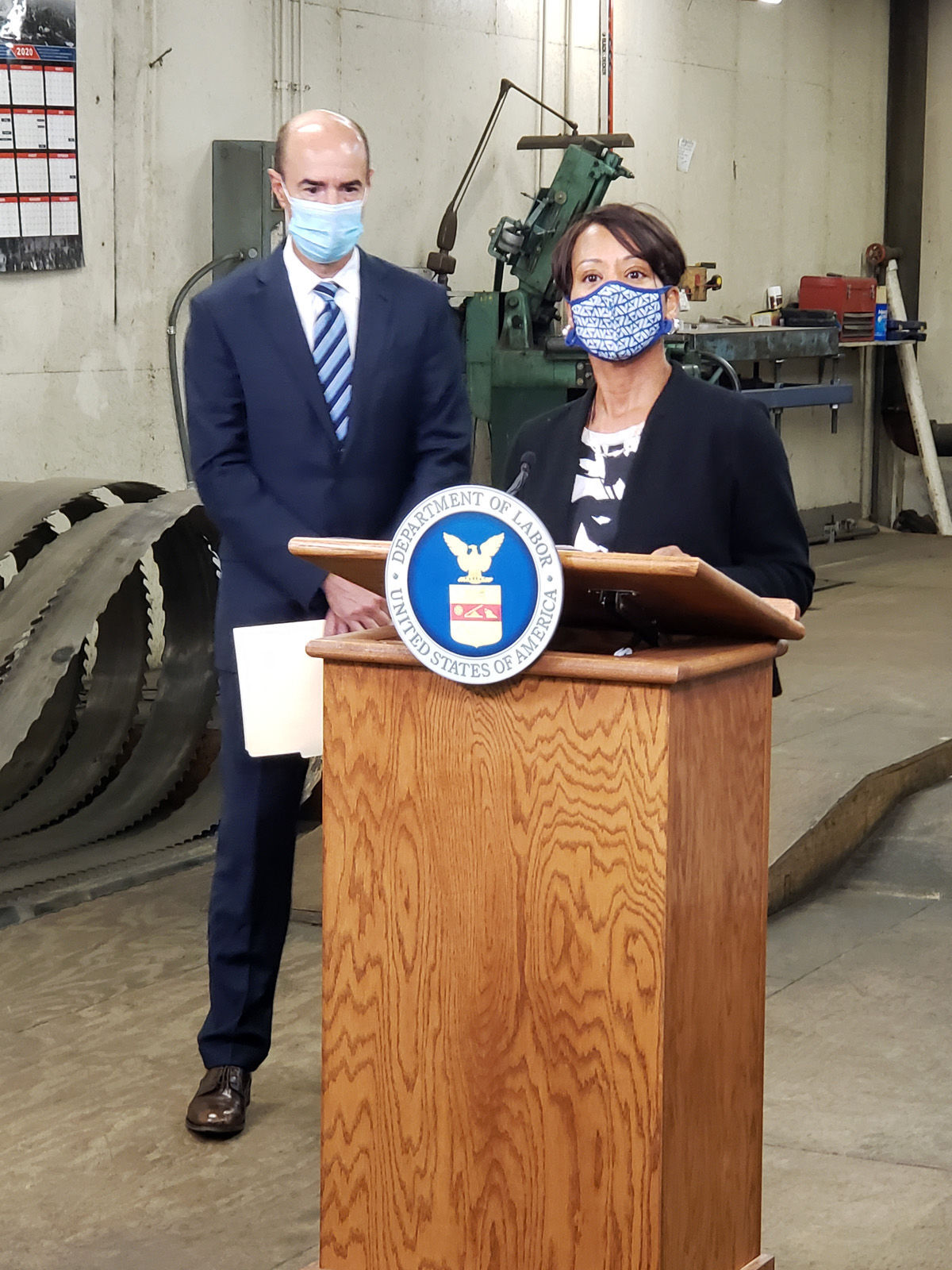 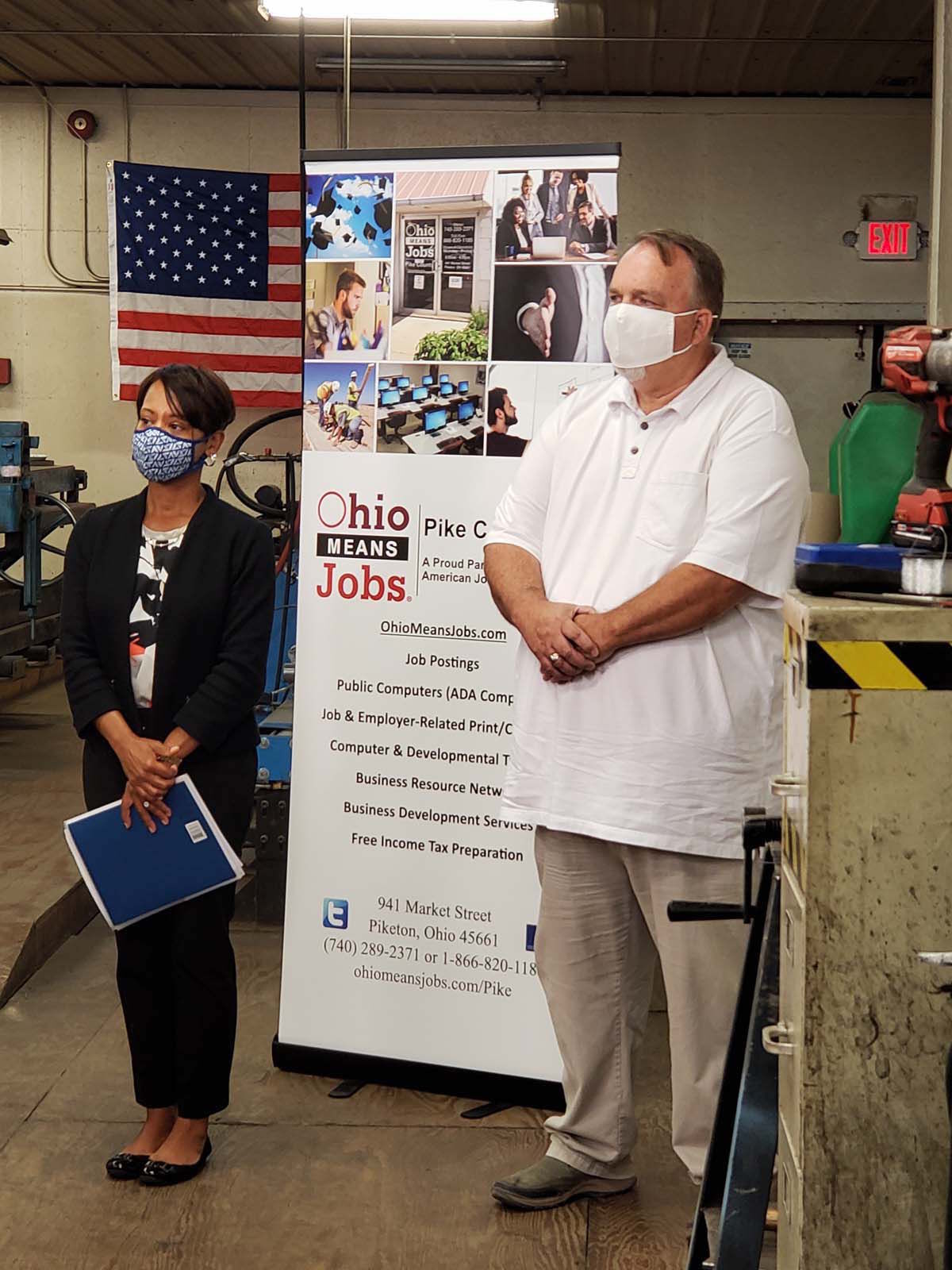 U.S. Secretary of Labor Eugene Scalia visited Pike County on Wednesday to announce federal grants, including funding to help in the fight against opioids.

Scalia announced an award of nearly $20 million in funding to four states. According to information from the U.S. Department of Labor, this funding is part of a new pilot program to address the health and economic impacts of widespread substance and opioid misuse, addiction and overdose by providing retraining and other services to workers in communities significantly impacted by the opioid crisis.

Scalia, who as Secretary of Labor is a member of President Donald Trump’s cabinet, was joined by Ohio Department of Job and Family Services (ODJFS) Director Kimberly Hall and U.S. Rep. Brad Wenstrup (OH-02) for the announcement in Piketon.

“Today’s announcement is another important step in the President’s and the Labor Department’s efforts to address the opioid crisis in the United States,” Secretary Scalia remarked. “Altogether, the Department is awarding nearly $20 million to help four States combat the devastating effects of opioids. I’m pleased to be in Piketon to announce a grant of $5 million to help communities in southern Ohio fight the ravages of the drug epidemic and grow stronger than ever.”

The $5 million will be focused on Pike, Adams, Brown, and Scioto counties.

“Today’s funding represents this Administration’s continued commitment to serving those most in need,” said Assistant Secretary for Employment and Training John Pallasch. “The U.S. Department of Labor is taking a strong stand to support individuals and communities impacted by the crisis.”

“We are extremely grateful to Secretary Scalia and the Department of Labor for awarding this grant to this region that has been so unbelievably hard hit by the opioid crisis,” stated ODJFS Director Kimberly Hall on Wednesday.

In 2017, the national overdose rate was 21.7 per 100,000 people, Hall said. In Ohio, it was more than double that rate, and in Scioto County, it was more than triple. Statewide, about half of all children placed in county children services custody are there because of their parents’ drug use, she said, but it is estimated that in Pike County this number is about 62 percent, in Adams County, about 68 percent, and in Brown County, about 77 percent.

Hall said that the COVID-19 pandemic has only made matters worse by bringing isolation, stress, interruptions to in-person mental health services, and eliminating jobs. ODJFS has several efforts underway to combat the opioid crisis, she said, and the grant announced on Wednesday will be unique, she stated, in that “it will focus intense targeted services on this particular area.”

“It’s no secret that Ohio, and southern Ohio in many ways, has been hit hard (by the opioid crisis),” Congressman Wenstrup said.

The problems with the opioid crisis have been complicated by COVID-19, he added.

Wenstrup thanked President Trump for making the opioid crisis a priority, for declaring a public health emergency, and for funds for treatment and recovery. He said that he was pleased with the Department of Labor for the millions of dollars in grants they have provided.

According to information from the Department of Labor, in October 2018, President Trump signed the SUPPORT for Patients and Communities Act, which directed the Department to develop a pilot grant program focused on addressing the economic and workforce impacts associated with the high rate of substance use disorders. The Department’s grant program – “Support to Communities: Fostering Opioid Recovery through Workforce Development” – was created in response to the Act, according to the department’s press release about Wednesday’s announcement.

According to the Department of Labor, “applicants will use these funds to collaborate with a network of partners to address the drug epidemic in their local areas. Grantees will engage community partners, such as local workforce development boards, employers or industry organizations, treatment and recovery centers, education providers, legal services and law enforcement organizations, and community-based and faith-based organizations, to address the economic effects of widespread substance misuse, opioid use, addiction and overdose in significantly impacted service areas.”

Scalia said that the opioid and drug crisis is one of our nation’s greatest challenges in this moment.

“Each year tens of thousands of lives are lost to overdoses, and behind each of those fatalities is a family and a community that mourns and must adjust to life without that valued loved one, friend, or fellow worker,” he said.

“This is a challenge that requires sustained attention; even during the coronavirus pandemic, we cannot lose focus on the opioid and drug crisis. On the contrary, as the congressman and Director Hall mentioned we know that the health risks of the pandemic include increased instances of depression and drug use.”

Early data from the height of the pandemic indicates a possible 40 percent increase in overdoses this past May compared to May of 2019, he said.

“I know that the toll of opioids and other drugs on communities in southern Ohio has been particularly high, which is why we are here in Piketon for this announcement,” Scalia stated.

“To help these communities tackle such an extraordinary challenge, the Ohio Department of Job and Family Services will receive $5 million from the support act to help Pike, Adams, Brown, and Scioto counties fight substance use disorders and gain back the ground that’s been lost...”

Scalia indicated that the grants will do this by helping to train people to fill jobs — “jobs that in many cases are directly aimed themselves at helping others receive addiction treatment and begin on a path to recovery.”

“The employment and training provided through this grant will be targeted, in part, to individuals who are themselves recovering from a substance use disorder or who have come from families and communities affected by the crisis,” he stated.

“In time, we hope that through this grant we will see teams of nurses, counselors, and others in southern Ohio” helping their neighbors overcome addiction and return to work, he added.

Scalia thanked ODJFS as well as Ohio Governor Mike DeWine “for the priority his administration has continued to make to fight this crisis even as we deal with other challenges.”

He thanked Ohio Valley Veneer for hosting the event and thanked Ed Robbins specifically for the work that he and his company does to provide opportunities to men and women in recovery.

“Ultimately, this is an effort for entire communities, and I’m hopeful the grants we’re making today will give a powerful boost to southern Ohio’s battle against opioids.”

In a brief exclusive interview with the News Watchman after the press conference, Secretary Scalia indicated that Pike County was chosen as the place for his announcement because the four-county area of Pike, Adams, Brown, and Scioto has been identified as the area that will be the focus of the $5 million effort.

“There are few places in the country more in need of this kind of assistance,” he said. “We also have confidence at the Labor Department in the care and quality with which the Ohio Department of Job and Family Services will administer this program.”

This past week, the Pike County General Health District shared data from the Pike County Post Overdose Response Team that shows that from March 1 to June 30 of this year, there were 93 overdoses in Pike County. In response to a question on their Facebook page, the health district said that they are not blaming this on the pandemic but that they were asked by a citizen to pull that data and post it.

The health district also shared information on their Facebook page from earlier this past week by Harm Reduction Ohio, which stated that “the Ohio Department of Health mortality database, updated this morning, added 107 more confirmed overdose deaths in Ohio in 2020. That brings the total number of overdose deaths recorded by the state so far this year to 2,178. Ohio is on a horrific pace of overdose death: on track to exceed by 25% to 30% the number of deaths recorded last year ... January, February, April and May have already recorded more deaths in 2020 than in 2019 — and that’s based on incomplete 2020 numbers. The month of May was particularly deadly in Ohio. State data already has recorded 437 overdose deaths (with more to come) versus 329 overdose deaths in May 2019.

“Bottom line: Ohio overdose deaths are way up this year, likely due to COVID-19 and more fentanyl in the drug supply, especially in cocaine and meth. People who consume drugs ... should be extremely careful and carry Narcan (naloxone) to reduce the risk of overdose death.”