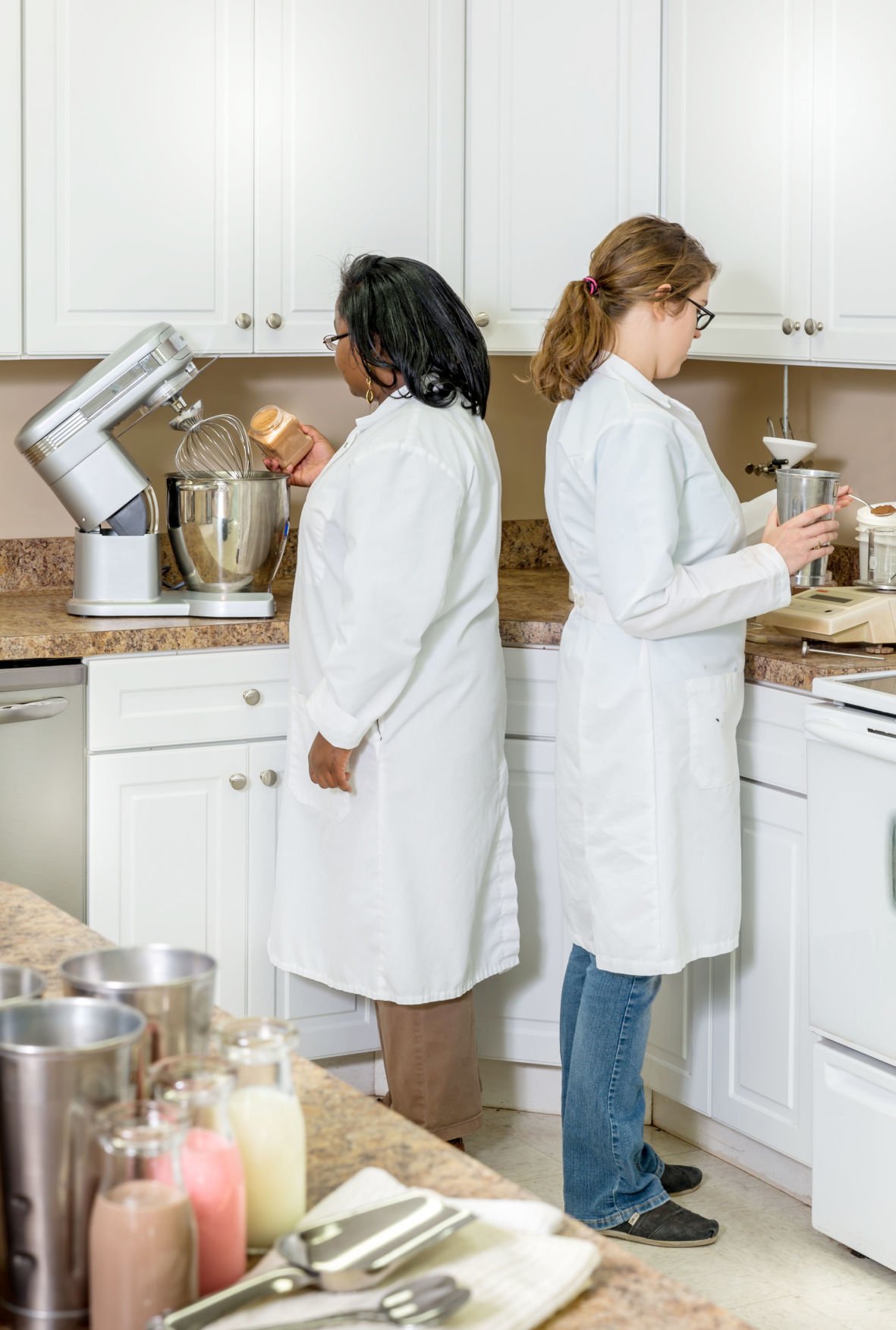 Amber (Hodge) Mahaffey stands to the right of her co-worker Ellon as they work in a kitchen lab area to create a new chocolate peanut butter flavor for use in dairy products. 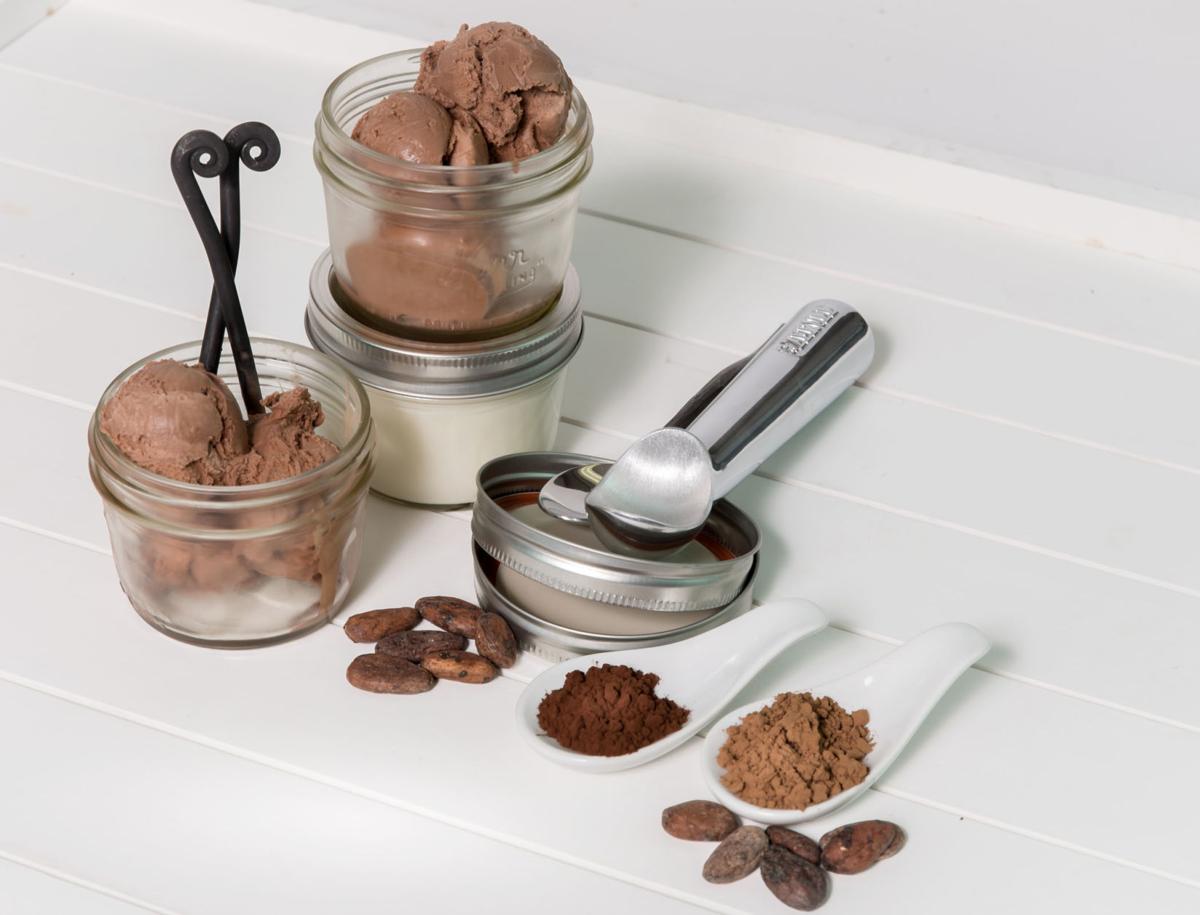 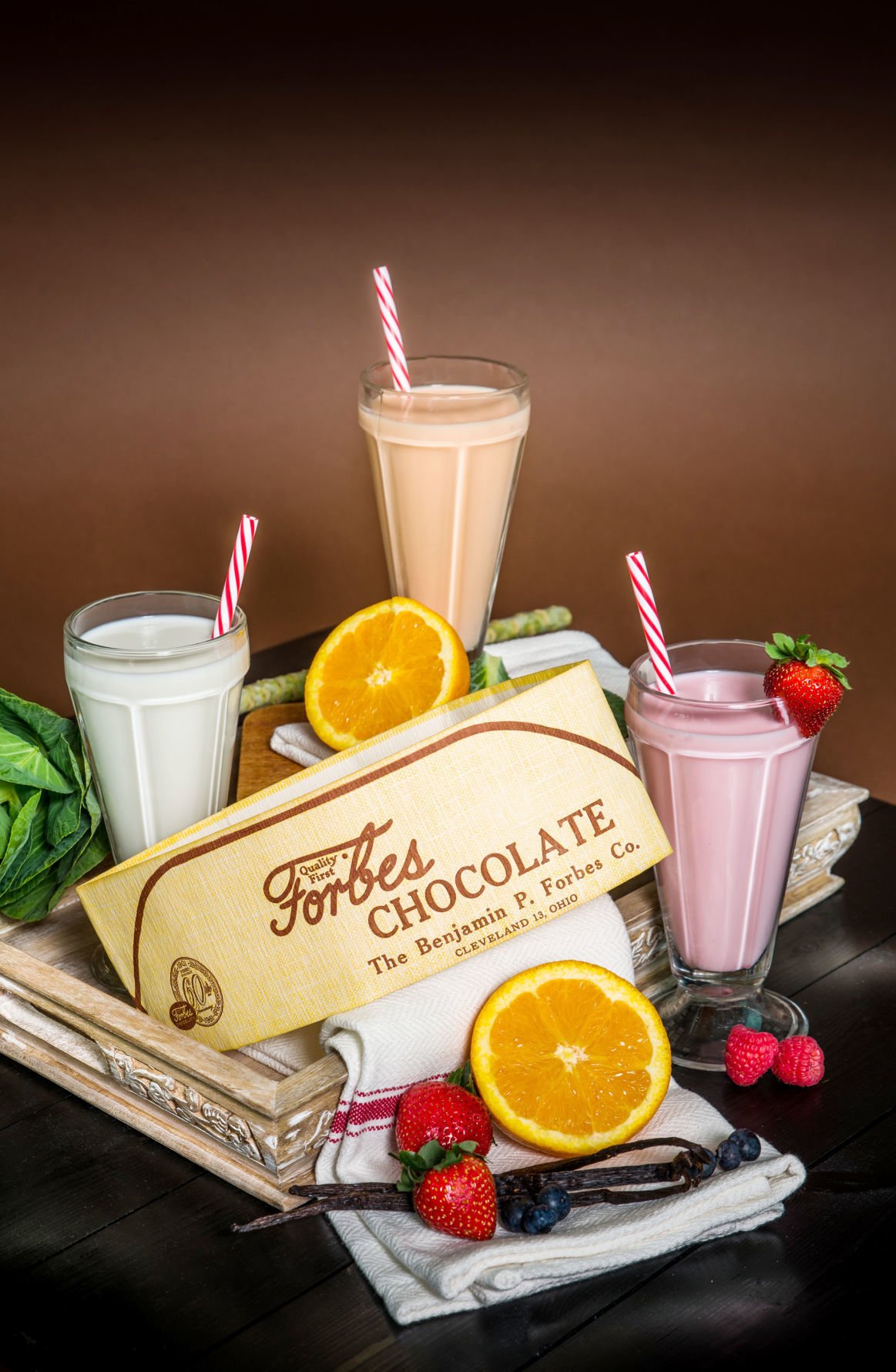 Amber (Hodge) Mahaffey stands to the right of her co-worker Ellon as they work in a kitchen lab area to create a new chocolate peanut butter flavor for use in dairy products.

It’s a staple in school cafeterias across the nation and can seemingly be bought at every store serving any sort of dairy products.

Chocolate milk, created by adding cocoa power and a few other ingredients to the milk from dairy cows, has a new twist, thanks to Piketon graduate Amber (Hodge) Mahaffey.

A new formula for chocolate peanut butter milk was developed by Mahaffey in her job as the Product Development and Innovation Specialist for Forbes Chocolate, located in a suburb of Cleveland. In fact, Mahaffey is the only employee at Forbes Chocolate serving in that role.

Mahaffey, who lived in Pike County her entire life until she went to college at Ohio State University, had an internship with Forbes Chocolate in 2015. That opportunity eventually led to full-time employment and a newly-created position for Mahaffey, who then moved to Cleveland.

“The company itself makes powdered mixes for ice cream and chocolate milk, and I create the formulas,” explained Mahaffey. “So we sell cocoa to dairies who add it to milk and make the chocolate milk (or ice cream). Our big customers are grocery stores, schools, and even local ice cream shops.”

Since chocolate and peanut butter are often combined in candy form, formulating milk with the same combination seemed like a popular option.

“My job is entirely fueled by what the customers want. They ask for flavors, and I provide,” said Mahaffey. “Chocolate peanut butter was a challenge because of allergens. Most facilities don’t want to introduce a new allergen, so we actually had to find an allergen-free peanut butter flavor (which was actually pretty difficult!) Chocolate peanut butter actually existed at our facility for a while before I was hired, but with each new customer, there’s always innovation work to be done, which was a lot of my contribution to the product.”

For those hoping to taste chocolate peanut butter milk or other varieties, it could be a right-place, right-time situation.

“I am not aware of any place in Pike County that would have the chocolate peanut butter milk, although that doesn’t mean it’s not there,” said Mahaffey. “Once the product leaves our facility, the customer really has no obligation to us to tell us where it will be available to purchase. Some do; some don’t. I know the big customer that is buying this product (chocolate peanut butter) is in Pennsylvania.”

According to Mahaffey, there are processing parameters for each dairy that have to be evaluated each time a product is recommended.

“So even once you get the flavor correct, sometimes that’s only half the battle. Usually the process is: I come with an internal formula that everyone in the company signs off on,” said Mahaffey. “Then I send samples to the potential dairy and they give me their comments. It almost never happens on the first try. Even if they love the flavor, sometimes the price is too high, and we have to adjust that, or it doesn’t fit their nutritional targets. There’s a lot involved, and it’s never a straight-line process.”

Although Mahaffey couldn’t elaborate on specific customers, she says it is likely that many people in the area have tasted Forbes Chocolate products in some forms through milk and/or ice cream through products sold by large national chains.

“My job is working in research and development, so basically, a customer says, ‘Make me ice cream or milk that tastes like x,’ and I have to come up with a formula that satisfies their needs,” said Mahaffey.

“Since I’ve been hired on at the company, we’ve expanded on a lot of our not-chocolate flavors as well. So we have strawberry, orange cream, root beer, different cookie flavors, and of course, the chocolate peanut butter. After two years in Cleveland, I moved back to Columbus, so now I have a mini lab set up in my house and work from here. It’s a pretty neat job actually.”

Once a formula is created, it is up to the entire team to taste it before sending it off to the customer.

“We always taste our products on our end because our motto is ‘Quality First.’ If the whole team thinks the samples are good, they get sent to the customer. But in reality, it’s all the customer’s decision how we proceed from there. Sometimes things need to be sweeter, or have more or less or a certain flavor note, etc,” said Mahaffey. “But then it comes back to us. We have a lab where everyone sits down and blind taste tests the products, and then we can record notes and go back to the drawing board if necessary.”

Besides coming up with formulas for new flavors, Mahaffey said that she serves as backup for several other departments with Forbes Chocolate. Those include quality assurance, where they make sure that all of the raw materials are tested and up to the company’s standards before they make them; and regulatory, where Forbes Chocolate gets audited by food agencies to make sure their facility is safe, and creating documents to send to customers.

Mahaffey’s college path led her to her current occupation, which is a job she says she truly loves. Mahaffey obtained a Bachelor of Science in Food Science and Technology from Ohio State University.

“I went there (to OSU) with the intention of becoming a doctor but decided I didn’t want to be in school that long. A food science degree is heavily science based, so for the first two years, you take all the same classes you would if you were doing pre-med: calculus, microbiology, chemistry, organic chemistry, physics,” said Mahaffey. “Once you get further into the major you take more food-related things: food microbiology, food chemistry, and food quality assurance and processing classes. The major currently has a 99-percent job-placement rate within six months of graduation, and it’s such a fascinating field and job market to get into.”

Mahaffey currently resides in Columbus with her husband, Sean, and their two cats, Tilly and Mabel. She returns to Pike County to visit friends and family several times a year. She has also given back to Piketon High School by speaking to the Agricultural Science class about her job.

“I love to talk about my job since it’s such a growing job market, and I don’t think most people are aware that this job even exists. It’s such a fun job!”