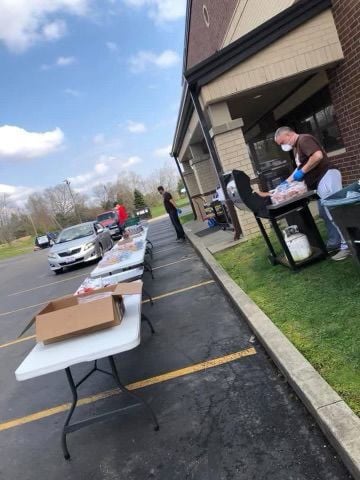 Eastern Local Schools Superintendent Neil Leist can be seen here manning his grill during the Sunday drive-thru food distribution event at the school during the 2020 COVID-19 shutdown. Leist has been chosen as the Beaver Oktoberfest Parade Grand Marshal for 2021. 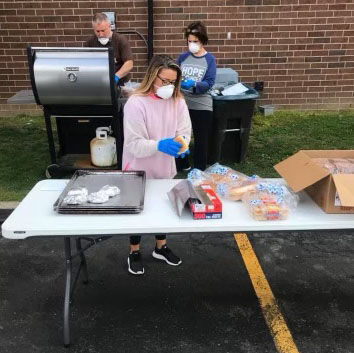 Neil Leist stands behind the grill as some of the Eagle Angels prepare food for distribution during the spring 2020 COVID-19 mandated shutdown.

Eastern Local Schools Superintendent Neil Leist can be seen here manning his grill during the Sunday drive-thru food distribution event at the school during the 2020 COVID-19 shutdown. Leist has been chosen as the Beaver Oktoberfest Parade Grand Marshal for 2021.

Neil Leist stands behind the grill as some of the Eagle Angels prepare food for distribution during the spring 2020 COVID-19 mandated shutdown.

While Eastern Local Schools Superintendent Neil Leist is honored to be chosen as the Beaver Oktoberfest 2021 Grand Marshal, he says he will not be sharing the honor alone.

When the state-mandated shutdown for schools came from Governor Mike DeWine in mid-March 2020, due to the arrival of a new coronavirus now known as COVID-19, Leist and others from the Eastern Local School District flew into action.

Countless children across the state and particularly in southern Ohio depend on the breakfast and lunch meals they receive each day at school. Without school, there would be no food. So, the Eagle Angels took flight.

“It’s a pretty heartwarming story. We knew that our students depended on us for breakfast and lunch — those two meals a day,” said Leist, who met with Terry Keeton, Margaret Rigsby, Lance Allen and others to create a plan.

“This pandemic scared everyone, especially that first six months. Everyone was hiding in caves and afraid to come out their houses. The Eagles Angels, myself, and my administrative team were preparing meals, going out to deliver meals and making sure those kids had food to eat.”

Leist wants all of the Eagle Angels to be recognized.

“I might have been the superintendent, who got a lot of credit. Yes, I helped create some of what we did for the food distribution,” said Leist. “But there were many people behind the scenes who I call Eagle Angels, who deserve the recognition just as much as I do. As Eagle Angels, it didn’t matter what it was going to cost us. It mattered in how we were getting the food into the homes and to the kids who needed it most.”

The money food came through the state and federally funded programs that already provided breakfast and lunch for Eastern students. Leist said it didn’t cost the taxpayers anything.

Door 19 was the location for food pickup at Eastern Local Schools from 11 a.m. to 1 p.m. Monday through Friday. On Fridays, extra meals were given for Saturday. Leist said on each Friday, students received a hot meal, two cold meals and two breakfasts.

“We realized the parents, grandparents and guardians did not always have options for coming to the school to pick up the food. We had at least 12 to 15 people who were delivering meals five days a week,” said Leist.

“I didn’t go home and hide. I backed my vehicle up to that kitchen and loaded about 200 meals a day. I had 12 homes that I delivered to on a regular basis. You knew the families and the kids needed the food.”

Leist and his wife, Candy, quickly realized that some families also needed food on Sundays to get through the shutdown. With the use of a few donations and the Leist family grill, the Eastern Local Schools Campus became the place for a Sunday drive-thru food distribution event.

“Every Sunday, we would grill 500 hot dogs and hamburgers. We would hand out Pop Tarts or another cold breakfast item along with a grilled hamburger or hot dog,” said Leist.

“It was a trying time. But it was a time that close-knit communities like ours stepped up and did what we felt was right to keep the food chain going. We were handing out 8,000 meals a week.”

Leist said he will not ride on a car as the 2021 Beaver Oktoberfest Grand Marshal. Rather, he will walk with a group of Eagle Angels as they cover the parade route on Sunday, Oct. 10, starting at 4 p.m.

“I’ve already told the Oktoberfest committee that I won’t be the only one leading the parade. I’m going to ask probably a dozen of those Eagle Angels who worked there almost on an every day basis including Terry Keeton, Kerry Spencer, Margaret Rigsby, Nancy Schrader, Lance Allen, the Weaver family and others to walk through the parade with me and be a part of that honor,” said Leist. “On Thursday, Oct. 7 at the opening ceremony (at 6 p.m.), I have to give a little speech. I would also like to have those people by my side.”

Due to the pandemic, there was no 2020 Beaver Oktoberfest. Leist is glad to see the festival return, even though COVID-19 is still prevalent.

“The normality of the situation has been improved. You have to look at what is best for the kids. Folks can come at their own risk,” said Leist. “But the kids in Eastern School District need this annual event. They need normality in their lives. The kids are excited. I’m excited about it. I had no idea this honor would be coming my way.”

Leist, who recently announced his retirement from Eastern Local Schools, has been known for his ability to take advantage of useful free items for the benefit of his students, teachers, classrooms and others. Now, the time has come to “clean out his closet”. The Eagle Angels will help with distribution.

“If you weren’t planning to go to the Beaver Oktoberfest parade, you might want to change your mind. It won’t be candy and Sweet Tarts that we throw out,” said Leist. “We will be throwing pencils, pens, t-shirts, headphones and other items. Hopefully the weather is good and we have a good crowd. I would like to invite all of Pike County to come out to the parade and pick up some free stuff.”

Even though Leist is retiring from his post as superintendent, he won’t be leaving the community. His three sons attend school there, and his wife Candy teaches seventh grade math for the district. His pride in the east end of Pike County is obvious.

“The Eagle Angels program was a good time for us to come together and show what a kind, loving community we have at our school district,” said Leist. “That’s why I’m glad my kids attend Eastern Local Schools, because the administration, the staff, and the community all care so much about each other.”