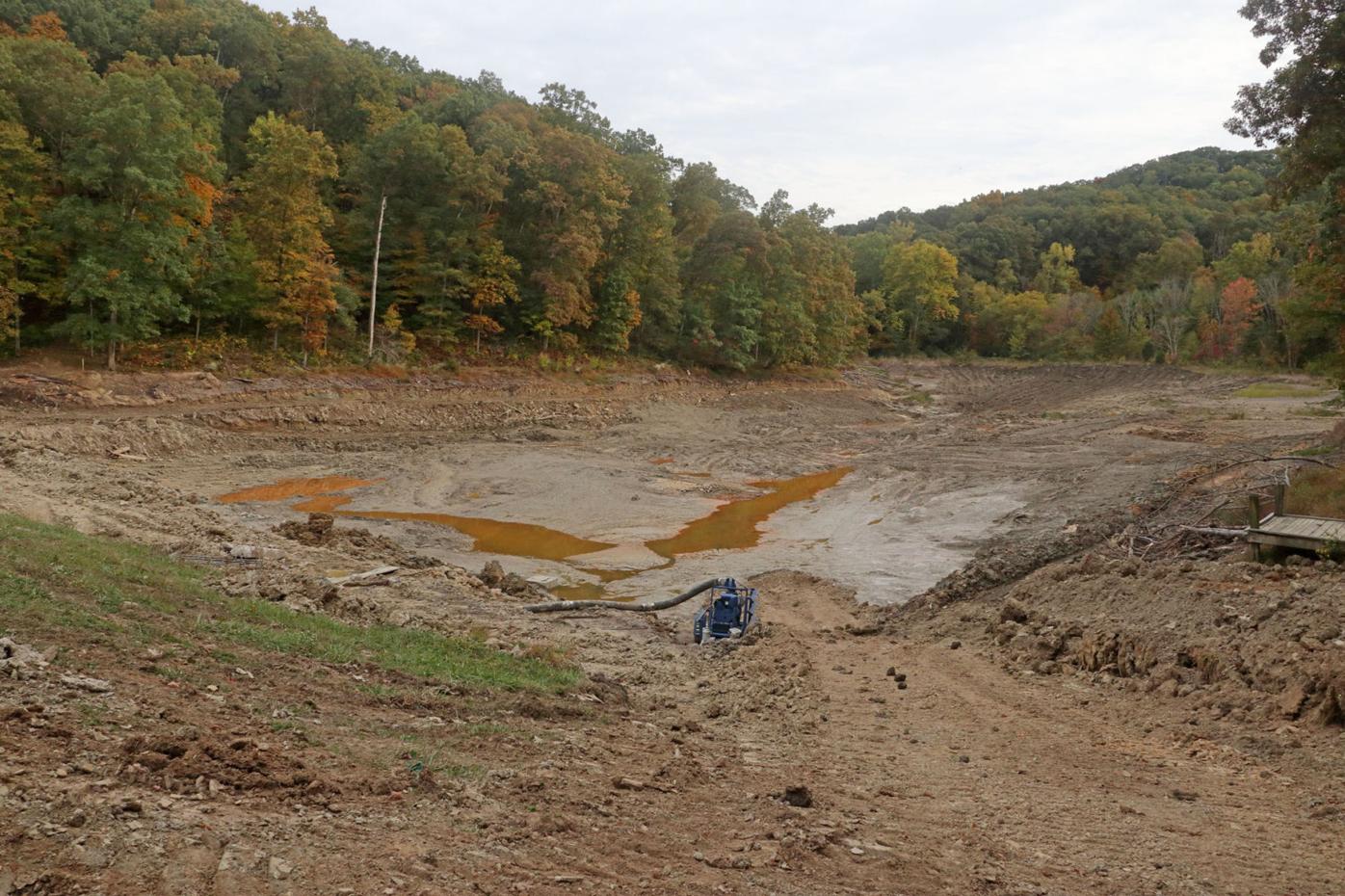 With the lake bed drained in late October, work was being done to transition the Stewart Lake area of Scioto Trail State Park to the natural stream. The dam is being removed due to costly repairs needed to keep it functional. 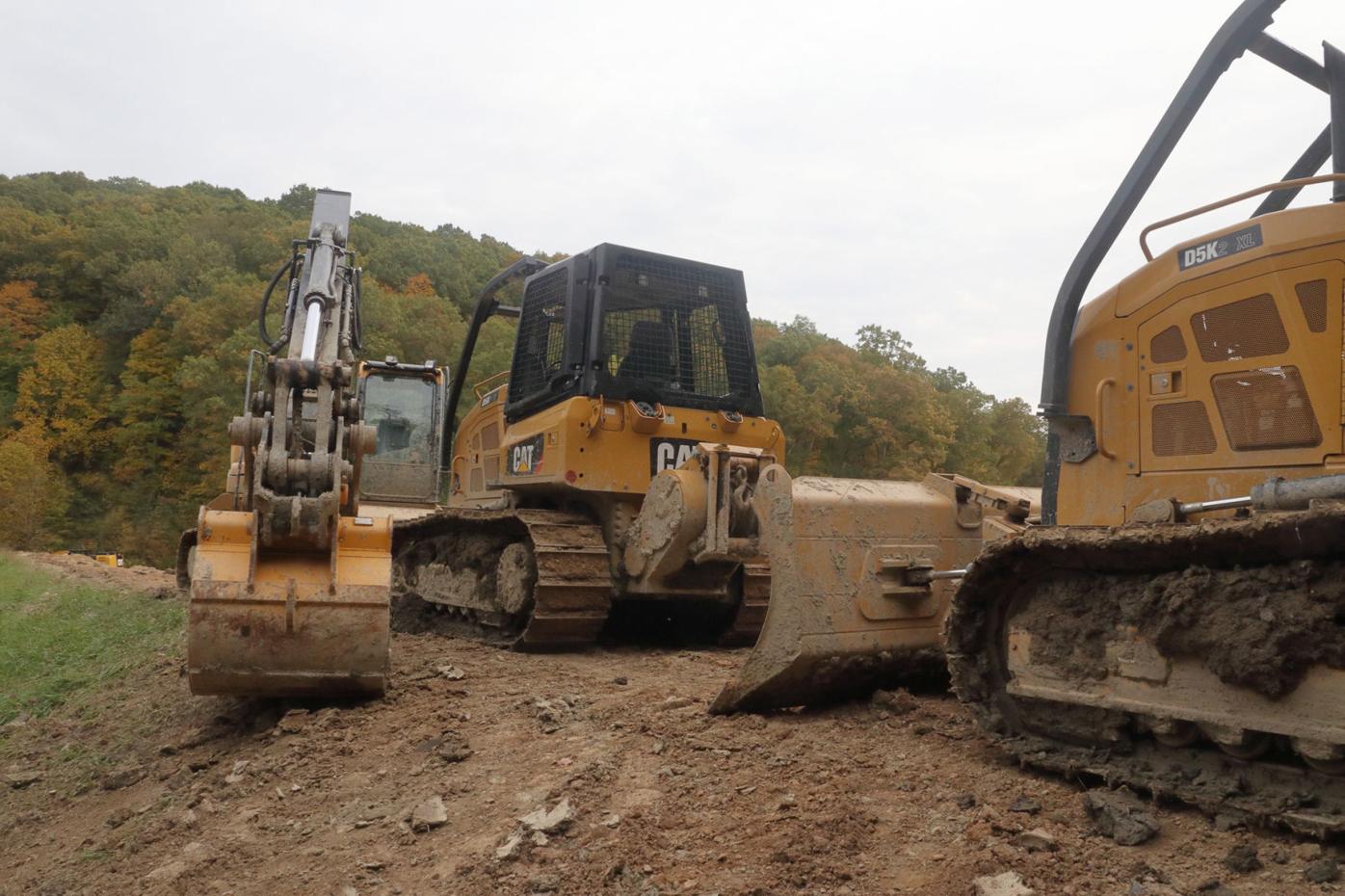 Earth-moving equipment is parked along the top of the Stewart Lake dam in Scioto Trail State Park in early October. 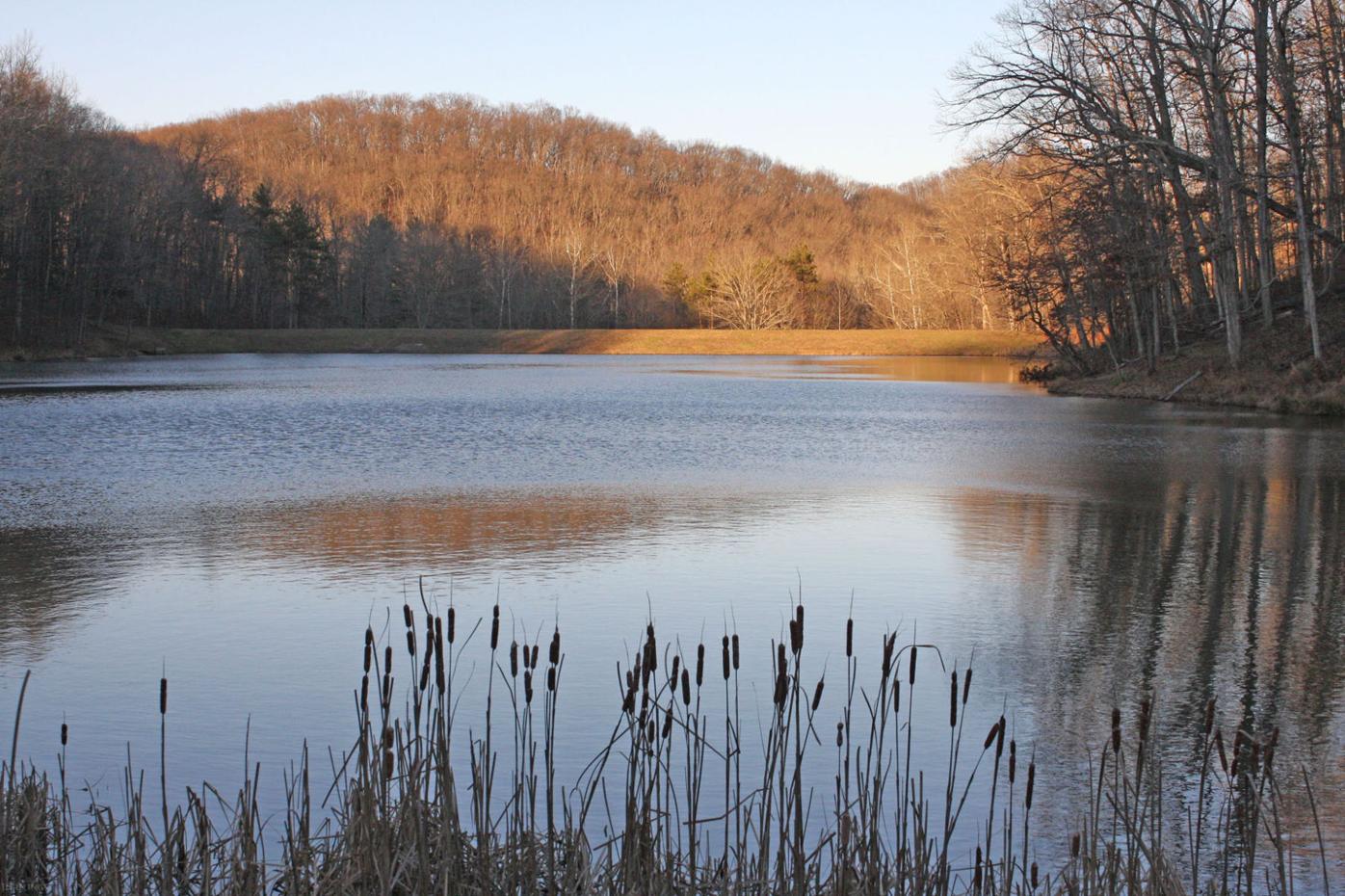 Formerly, a 0.8-mile trail around Stewart Lake existed. This photo was taken from the side opposite of the dam during winter 2011. 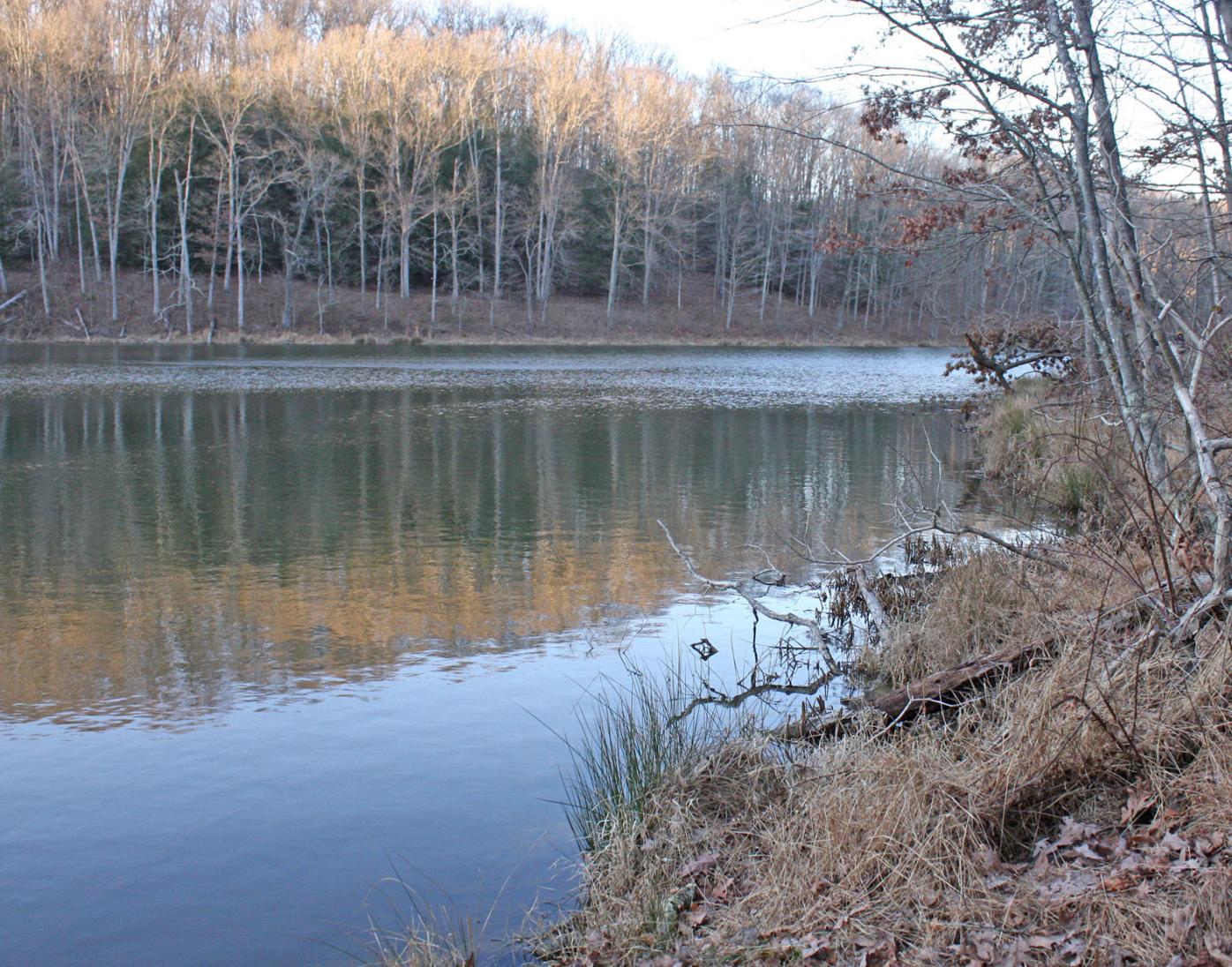 A view of Stewart Lake is full of reflections from the tall trees surrounding it. This photo was taken in the winter of 2011.

With the lake bed drained in late October, work was being done to transition the Stewart Lake area of Scioto Trail State Park to the natural stream. The dam is being removed due to costly repairs needed to keep it functional.

Earth-moving equipment is parked along the top of the Stewart Lake dam in Scioto Trail State Park in early October.

Formerly, a 0.8-mile trail around Stewart Lake existed. This photo was taken from the side opposite of the dam during winter 2011.

A view of Stewart Lake is full of reflections from the tall trees surrounding it. This photo was taken in the winter of 2011.

Located just across the county line in nearby Ross County, Scioto Trail State Park offers a 218-acre park that is nestled within the 9,000-acre Scioto Trail State Forest. A small portion of those 9,000 acres are located within Pike County near Back Hollow, Gee Hollow and Wilson Run roads.

Stewart Lake, the first lake visible when entering the park from U.S. 23 and traveling along Ohio 372/Stoney Creek Road, reportedly developed a leak, and now the dam is being removed.

According to Heidi Hetzel-Evans, Communications Manager of the Ohio Department of Natural Resources, the Stewart Lake dam is an 80-year-old Class 1 (high hazard) Dam which is regulated by ODNR’s Division of Water Resources, Dam Safety Program. The dam needed repairs and upgrades to remain functional. ODNR determined that the decommissioning/removal of the dam was the best option considering the costly repairs needed.

Within ODNR’s online document on dam repairs, it explains that much like buildings, bridges, and roads, dams are designed and constructed to function effectively for a specific period of time. This period of time is called design life. The design life of a dam will vary, but it is not unusual for a dam to function effectively for 100 years or more. Concrete structures, spillway and drain pipes, valves and gates, and embankment surfaces deteriorate and usually require repairs at some point during a dam’s design life.

By ODNR’s dam classification, Class 1 is the highest class with the most catastrophic outcome if the dam were to break. According to ODNR’s dam locator, Stewart Lake’s current earthen dam has a length of 360 feet, and height of 33 feet. Normal pool area is 6.4 acres, while the top of dam storage volume in acre-feet is 114.

Hetzel-Evans said the Stewart Lake dam will be removed by the end of the year. The water has already been drained in order to reduce the hazard of holding back potential energy and to dry out the lake bed. The lake bed will be used to reconstruct the dam breach. There will no longer be a lake in that location.

According to Hetzel-Evans, after the dam is fully removed, a rock-lined channel will be placed where the existing dam was located. The natural stream, Stony Creek, will flow through the old lake bed area. At this time, there is no other development of the area planned. According to the park’s website, primitive walk-in camp sites are still going to be available in the Stewart Lake area.

Historically, many of the lakes in today’s state parks throughout Ohio were constructed by the Civilian Conservation Corps (CCC).

Scioto Trail State Park’s history listed online explains that initial purchases of land for the park and forest began in 1922. Most of the major development took place in the 1930s during the original Civilian Conservation Corps (CCC) era. CCC crews constructed most of the roads, lakes and original recreational facilities of the region.

The Ohio History Connection shares more details about the CCC, which was created by then-President Franklin Delano Roosevelt March 31, 1933. The CCC was part of Roosevelt’s New Deal. Roosevelt hoped that his New Deal would allow people in the United States to cope with effects of the Great Depression.

Government officials organized the CCC like a military unit, with workers living in camps, wearing uniforms, and serving under the command of officers. Of the $30 pay each worker received, $25 was sent home to the family to help during the Great Depression, while the CCC covered the basic living expenses of each worker, including food, housing and clothing. The CCC provided employment to more than 3 million young men by its end. (from ohiohistorycentral.org/w/Civilian_Conservation_Corps)

Even though Stewart Lake will soon be a part of history, Caldwell Lake remains a focal point at the park.

Caldwell Lake, which underwent dam and spillway renovations in recent years, will remain as the park’s lone lake. It is located near the main camping area and offers a small boat ramp for electric motors or hand-powered vessels. Kayaks, canoes and paddleboats can be rented seasonly from the campground check-in location. Wooded and electric camping sites are available nearby. Fishing, picnicking, and swimming at a small unguarded beach are also available at Caldwell Lake.

The rest of the park and surrounding state forest offers trails for hiking, mountain bicycling and horseback riding.

The U.S. 23 entrance to the park has also seen some work in recent months as crews from the Ohio Department of Transportation work in the area to repair the hillside along the northbound lanes and prevent future hill slips.