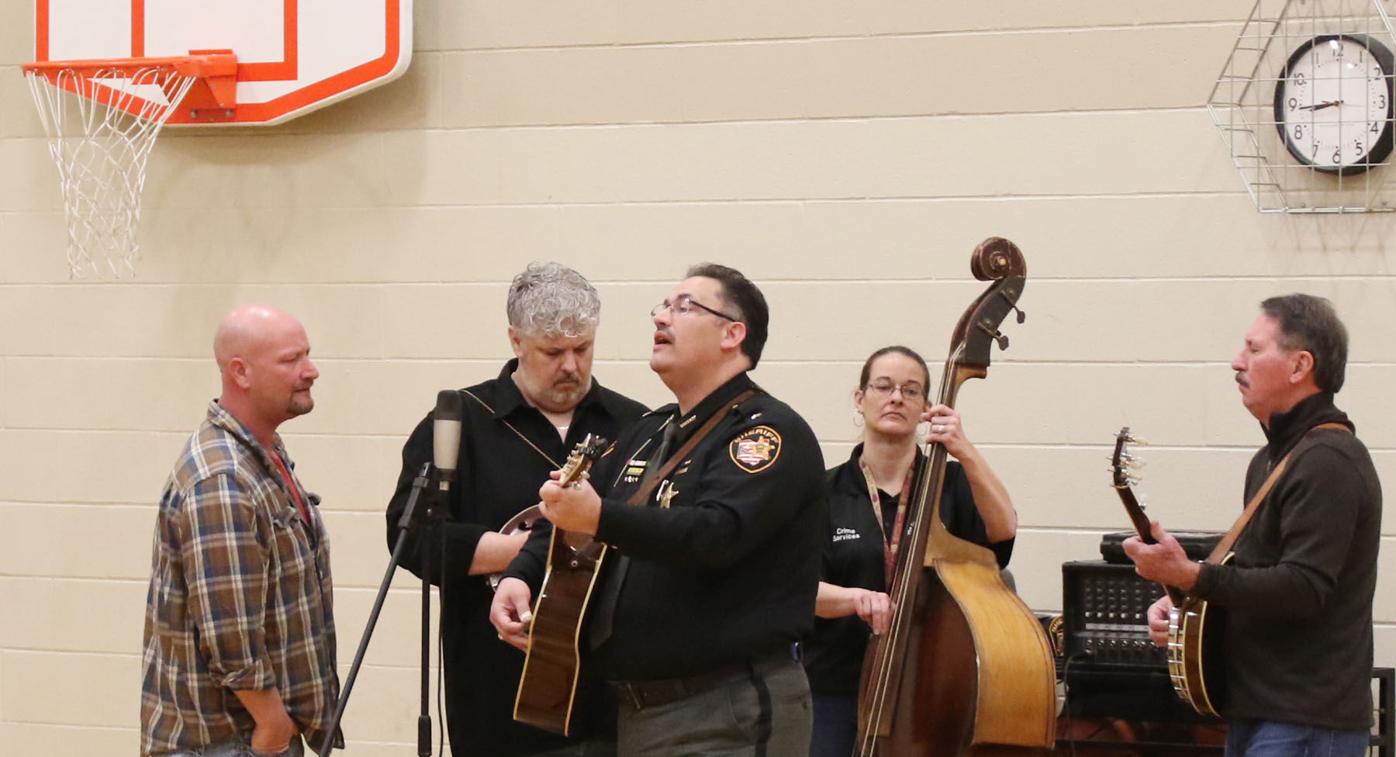 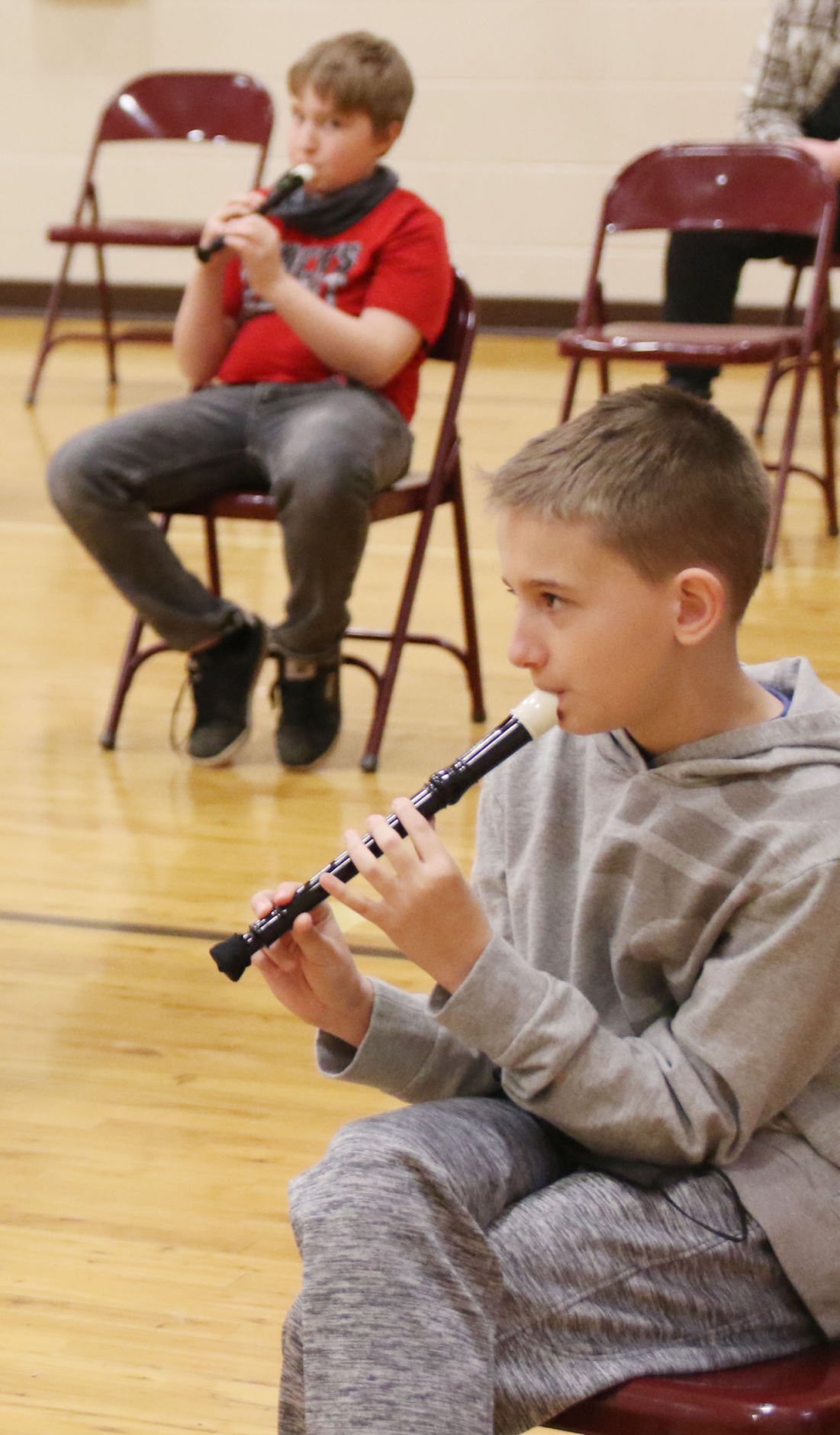 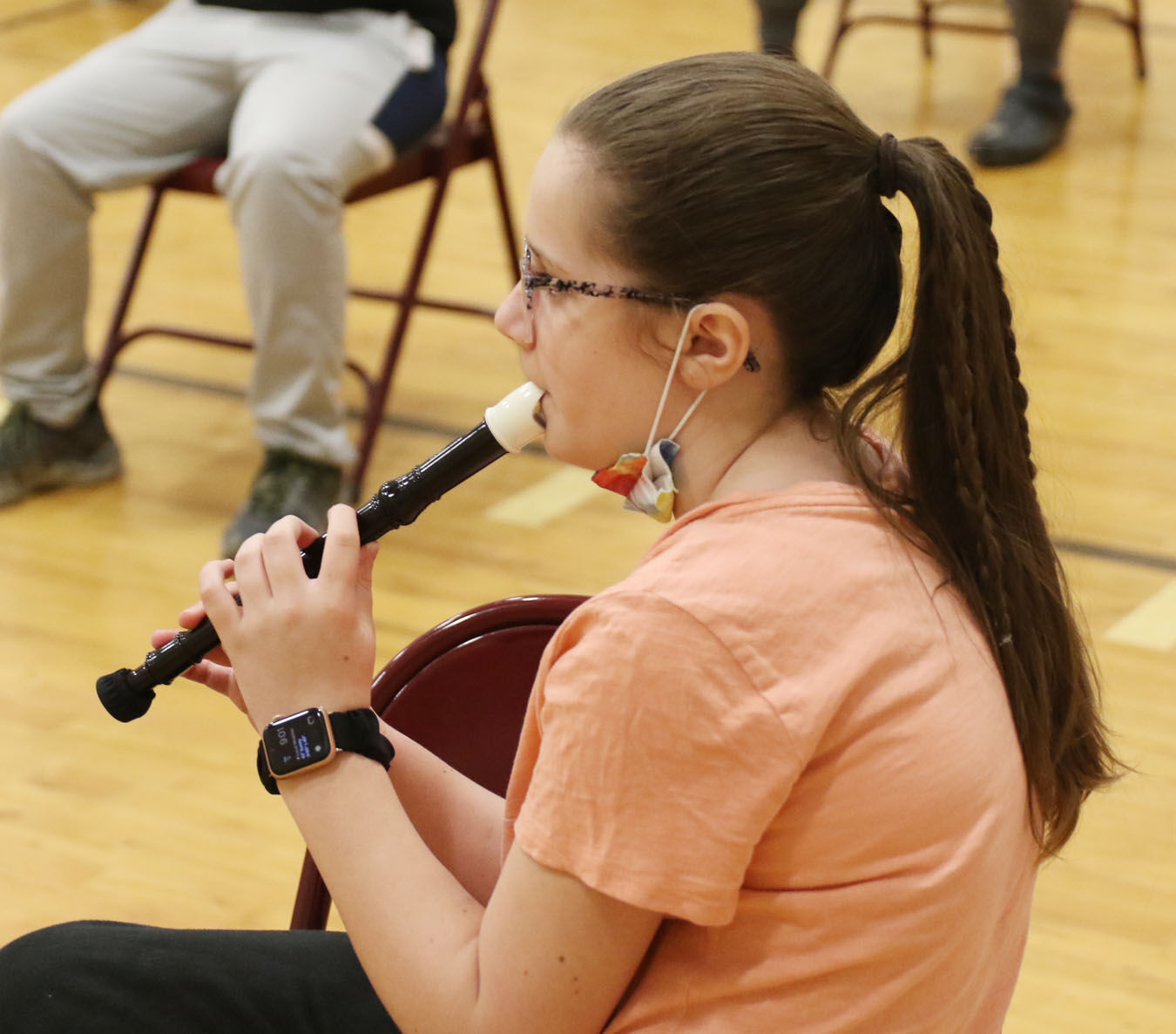 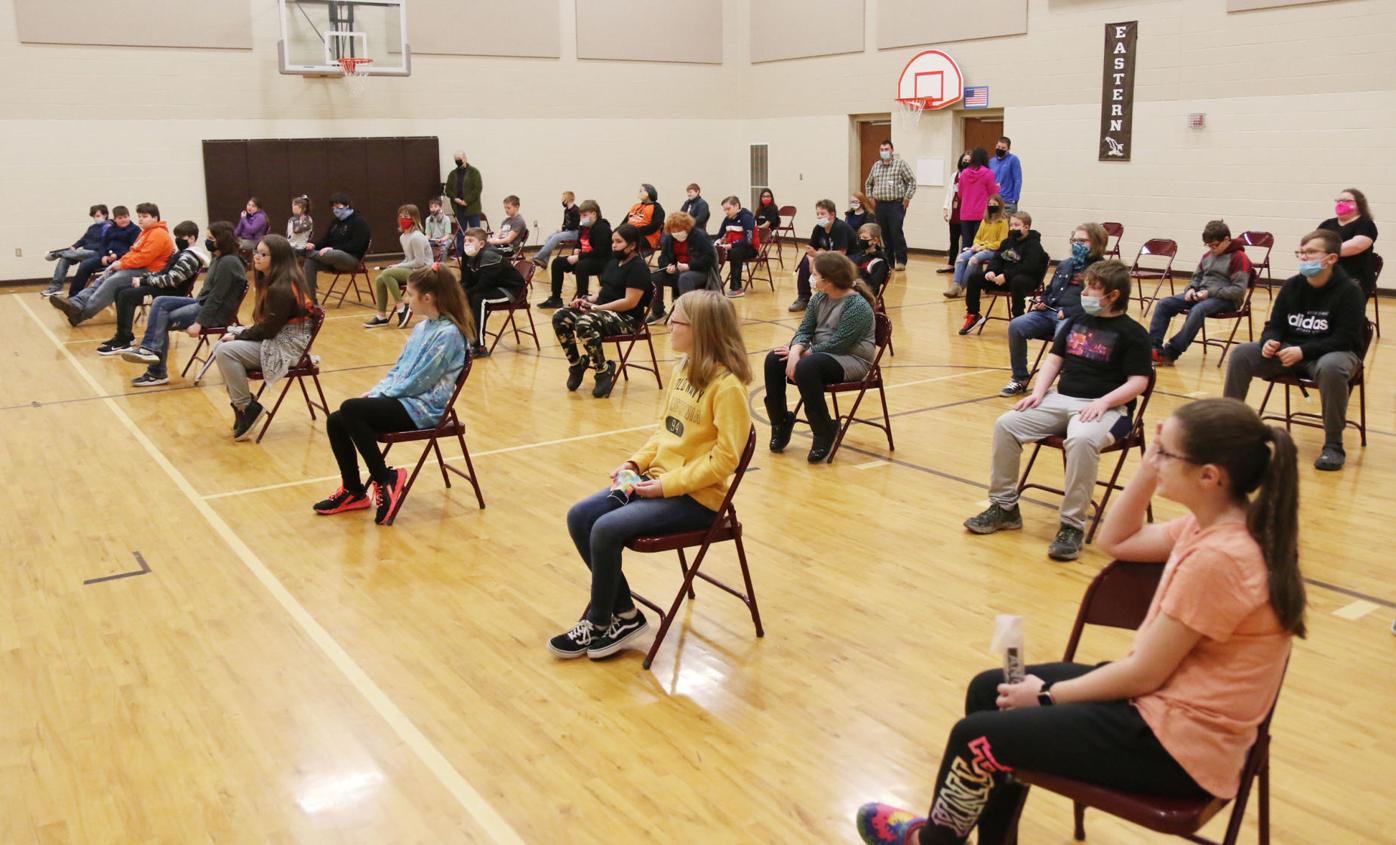 Social distancing due to COVID-19 regulations forced the students to be spaced out in the Eastern Elementary gymnasium during their Tuesday morning assembly. 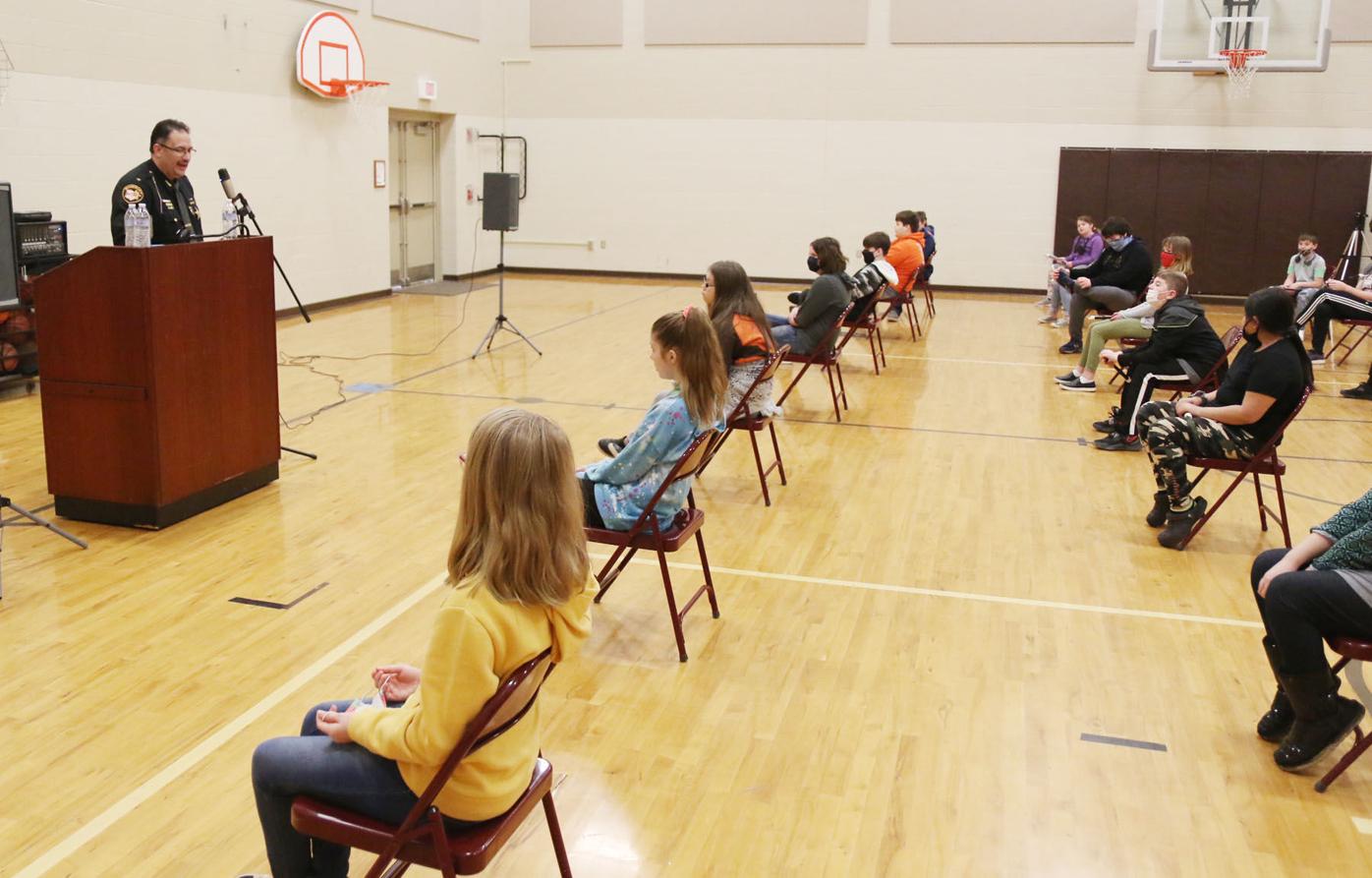 Social distancing due to COVID-19 regulations forced the students to be spaced out in the Eastern Elementary gymnasium during their Tuesday morning assembly. Here Sheriff Tracy Evans talks to the students about drugs. 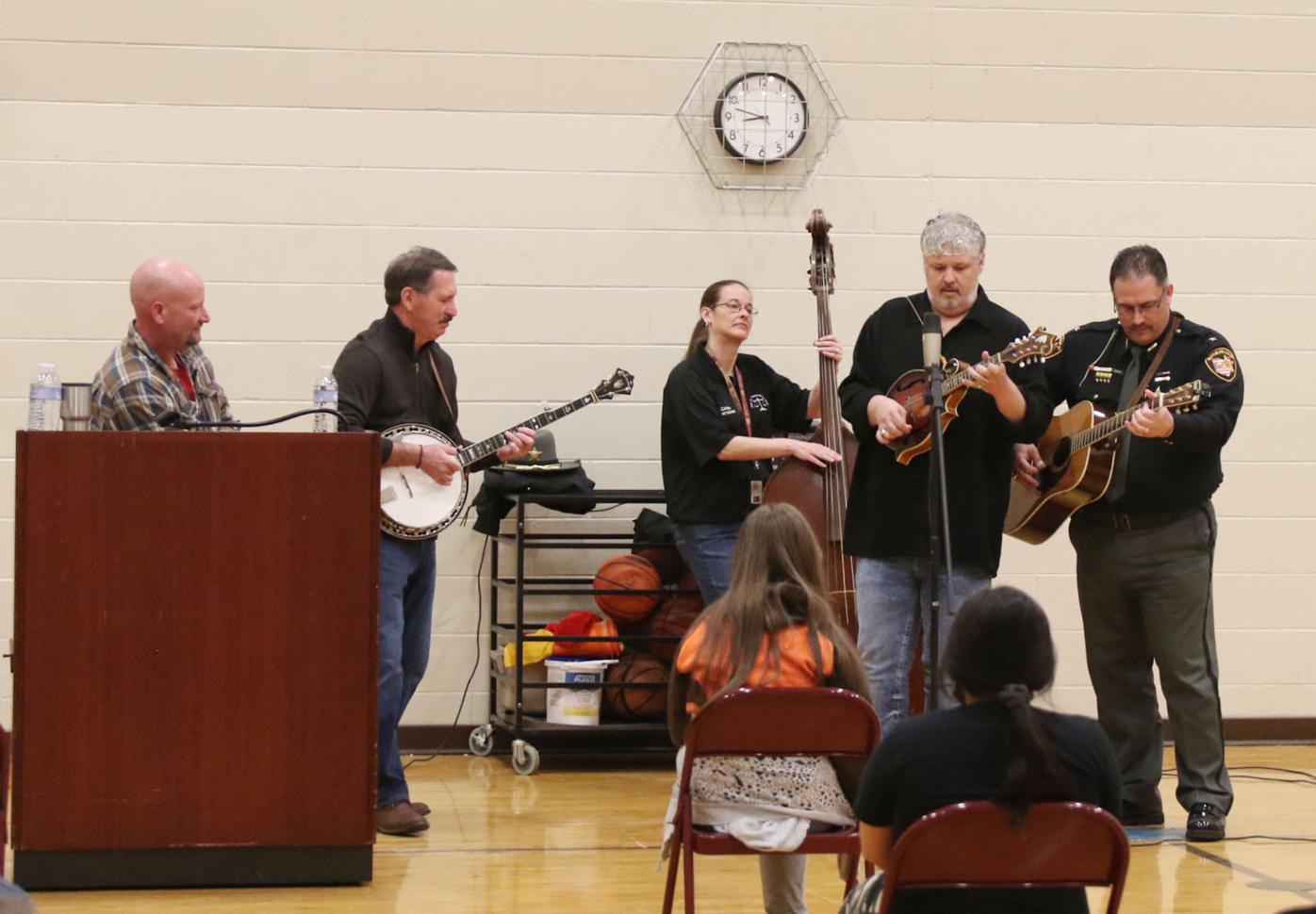 Social distancing due to COVID-19 regulations forced the students to be spaced out in the Eastern Elementary gymnasium during their Tuesday morning assembly.

Social distancing due to COVID-19 regulations forced the students to be spaced out in the Eastern Elementary gymnasium during their Tuesday morning assembly. Here Sheriff Tracy Evans talks to the students about drugs.

Just a few months into his tenure as Pike County Sheriff, Tracy Evans had the opportunity to showcase another side of his life for fifth grade students at Eastern Local Schools.

For those fifth graders, the school day began Tuesday morning with an 8 a.m. assembly featuring Evans and his bluegrass band, “Evans Brothers and Highway 52”. Band members include Tracy Evans (guitar/vocals), Todd Evans (vocals/upright bass), Amy White (upright bass), Jay White (mandolin/vocals), and Greg Romanello (banjo). Jay White serves as a substitute janitor at the school. White was the one who told school officials that Evans would like to give a concert and talk to the students, setting in motion the opportunity for the assembly.

Due to all of the COVID-19 restrictions and challenges, it was the first assembly of the school year for the students. Before the concert began, Evans took the opportunity to talk to the students about the dangers of drugs.

“Before we get started, I would like to talk to you a little bit about drugs,” said Evans to the fifth graders seated in chairs that were throughout the gym to comply with social distancing.

“A lot of people who you know may have problems with drugs. That’s why I am here today to talk to you about that. Perhaps you have encountered an individual who has had trouble with drugs. What are drugs? They are a substance that cause change in the body or part of the body. That’s what drugs do.”

Evans explained to the students the different types of drugs, such as over the counter drugs (OTC), which can be purchased at the store. Examples of those include aspirin, Advil and Tylenol. There are also prescription drugs that can only be prescribed by a doctor. These are sometimes abused by the person receiving the prescription, or others who obtain them illegally.

“There are individuals who want to take those drugs and abuse them. We call that substance abuse disorder. That’s a big phase for having an addiction to drugs,” explained Evans.

“There are common substances of drugs that lead to abuse. They include alcohol, like beer, wine, liquor, and drinks of that nature. You also have nicotine, which is in tobacco products. There are sedatives like tranquilizers or sleeping pills. They slow the body down.

“There is even caffeine. A lot of people don’t think caffeine is a drug but it is. You find it in coffee and soda pop. It boosts you up and gives you a little pep. That’s why your parents tell you not to drink to much of it. Your bodies, as you grow, are able to adapt to those drugs like caffeine more often. That’s why your parents don’t want you to drink too much caffeine because it can hurt you.”

Up next was the subject of illegal drugs. Evans explained, “There are stimulants like meth, or methamphetamine, and cocaine. They boost up your energy. We don’t want to take those. There are also pain killers that are normally called heroin, morphine and oxycodone and all of the other ‘oxys’ out there. Some of those are prescribed by a doctor for pain, like if they just got through a surgery.

“Then you have hallucinogens. That includes LSD, ecstasy and cannabis (marijuana or pot). You want to stay away from those. Hallucinogens can make you see things that aren’t there.”

A student mentioned that people sometimes abuse pain pills that they have been prescribed.

“You are exactly right,” said Evans responding to the student. “When people get out of the hospital and they have been prescribed a drug, sometimes they abuse those drugs. You don’t want to do that. Everything is put on a label with the person’s name. There is a dosage on that that says how much they can take. If you overdose on that medication, you take more than what is prescribed, which can hurt you.”

Up next was the subject of not being influenced by others when it comes to drugs.

“Now I want to talk to you about peer pressure,” said Evans. “What I mean by that is individuals may come to you and offer you these drugs. Or they may say, ‘This is cool. Everyone is doing it. You need to try it.’ What do you say?”

The students responded in unison with “No.” He asked them to say it louder, which they did emphatically.

“If individuals or friends offer you these drugs, just say no. If you have friends that are being pressured into taking drugs, you need to help them by telling a teacher. Or tell your parents, so they can tell someone to get some help,” said Evans.

“You need to build up some useful tactics or skills to resist those drug offers. They might say, ‘This makes you feel good.’ You can say, ‘I don’t need that to feel good.’ Or use another phrase saying to tell them you don’t need it or want it.”

Evans wrapped up his talk by saying, “That is just a little bit about drugs. We all know what to do. If somebody comes up and tries to get you to do these drugs, say no. If you have a friend that someone is trying to get to do drugs, tell a parent or a teacher.”

Up next was an extensive concert from “Evans Brothers and Highway 52”.

The first song the band performed, “One Loaf of Bread”, was written by the late Dave Evans, father of Tracy and Todd. Dave Evans was well-known in the bluegrass community, traveling with his band “Dave Evans and The River Bend”. Tracy Evans had joined his dad’s band at the age of 15.

The band included a couple of instrumental songs in between numbers, honored a request for a Johnny Cash tune, and added, “Be Proud of the Grey In Your Hair”, also written by the late Dave Evans. In all, the students were tuned into a concert that included more than 10 songs.

“We like to have the Pike County Sheriff’s Office come to the school,” said Eastern Elementary Principal Matt Hines. “It gives the kids the opportunity to have a positive interaction with the officers.”

Since COVID-19 has taken so many normalcies away from the school year, Hines explained that school had purchased recorder (flute-like musical instruments) for all of the students in the third, fourth and fifth grade as part of their musical education. In past years, students could use recorders owned by the school and then they would be thoroughly cleaned and sanitized in the school’s dishwasher. But COVID-19 has changed that.

“Since a lot of extras can’t happen this year, the school at least wanted to give the students the opportunity to enjoy learning the recorder in music classes with their instructor Megan McKee (music teacher for students in kindergarten through fifth grade),” said Hines.

The students had the opportunity to play a song on their recorders for the musicians, called “Hot Cross Buns.” The musicians strummed along, much to the enjoyment of the students.

After the assembly, three students shared their thoughts on the assembly and concert featuring Pike County Sheriff Tracy Evans.

Isabelle Valejo said she really liked the concert and her favorite band member was Jay White. When she has seen him working at the school as a janitor, she had no idea he was a musician and could play the mandolin. She enjoyed his excitement and the way he moved to the music, including playing his mandolin behind his head during a song.

Student Jase Fields added, “I barely listen to bluegrass, but I really enjoyed this concert. I think my favorite song was the one about the loaf of bread.”

During the concert, the band gave the students the option to make requests. At one point, the band said, “No AC/DC songs (a hard/heavy rock band).” But then followed it up by playing a brief acoustic version of an AC/DC song.

“That AC/DC song was impressive,” said student Kaylee Newsome. “It wasn’t my favorite song, but I did think it was really cool the way they did it. The second song they performed was my favorite. The whole concert was energetic. I had a nice time.”