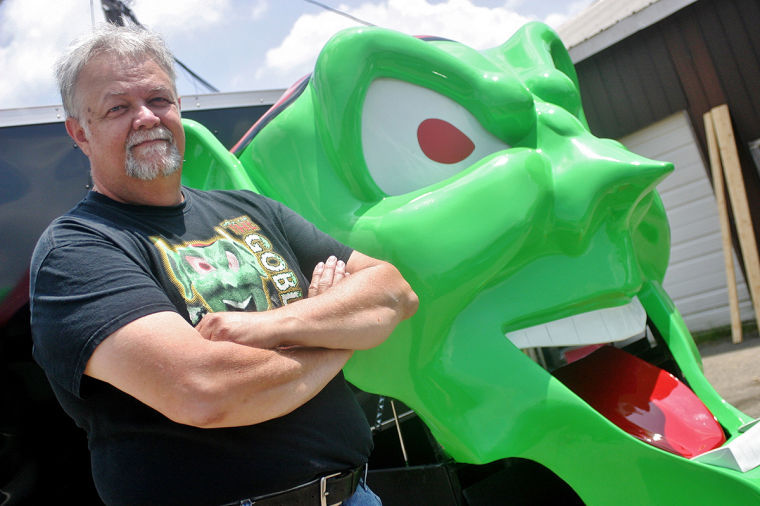 Tim Shockey, of Waverly, stands beside the Green Goblin head, from the Stephen King movie, “Maximum Overdrive.” Shockey purchased and spent two years restoring the prop, which he now displays in conventions across the country. 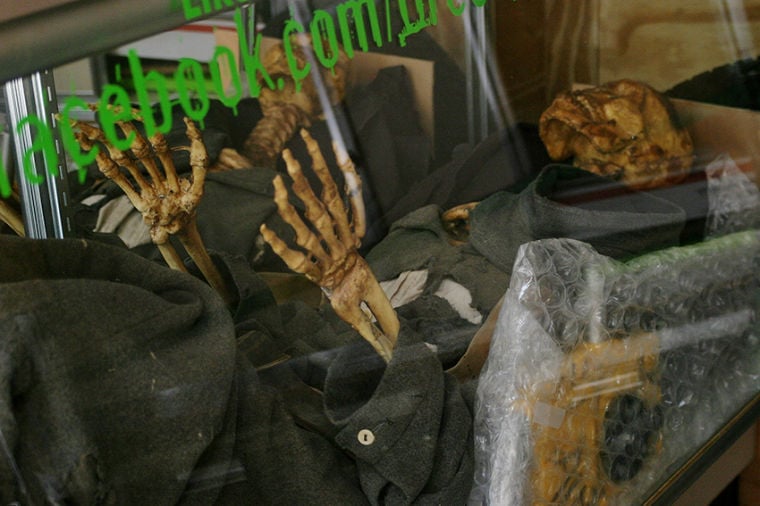 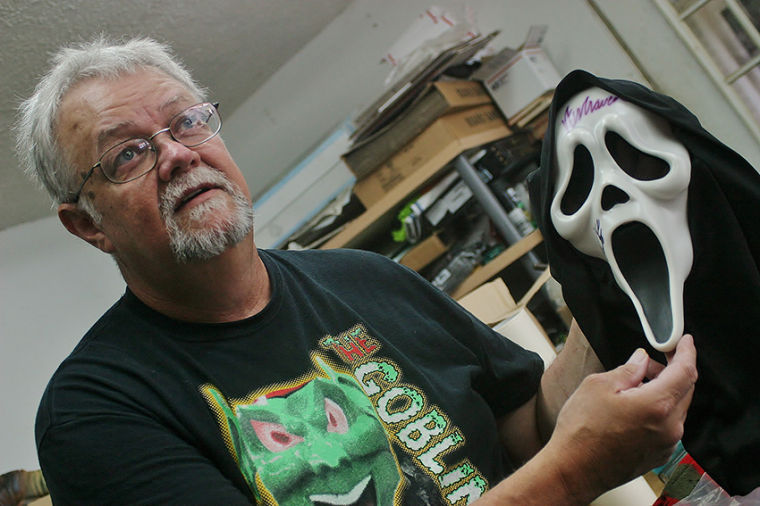 This mask, held by movie prop collector, Tim Shockey, was featured in the movie “Scream” and is autographed by director, Wes Craven.

Tim Shockey, of Waverly, stands beside the Green Goblin head, from the Stephen King movie, “Maximum Overdrive.” Shockey purchased and spent two years restoring the prop, which he now displays in conventions across the country.

This mask, held by movie prop collector, Tim Shockey, was featured in the movie “Scream” and is autographed by director, Wes Craven.

In 1987, Tim Shockey purchased his first movie prop — the Green Goblin Head from the Steven King movie, “Maximum Overdrive.” Since then he has added over 600 authentic props and wardrobe pieces to his unique collection.

“I buy the items straight from studios, prop houses or from private collectors, and I sell and trade items as well. It has become my hobby,” said Shockey, of Waverly. “Most items are stored in boxes or dress bags. Someday I would like to open a small museum to share my collection with everyone.”

Shockey says his prop collection stands out in that many pieces come with a “unique story”.

“I love to share the story behind the items with the fans,” said Shockey. “Some of my favorite items include handcuffs used on Jackie Chan in ‘Around the World in 80 Days’, a screen-used mask from ‘Scream 4’ that Wes Craved signed and gave to a woman who worked on the movie with him, and an ax that Michael Madsen used in ‘Scary Movie 4’. I met him at a show and had him sign it. The list goes on and on!”

At the age of 16, Shockey began creating a weekly comic strip which was featured in the News Watchman. Around that time, he also started a sign company, signs2graphics, a business he still operates on SR 220, near Dailyville.

“In the 1980s, my wife and I started Uncle Jim’s Videoland, in Waverly. We ran the video store for around eight years,” said Shockey. “I have always had a passion for movies, so when I saw that I was able to own items from the movies, I couldn’t resist!”

While there are many pieces he would love to add to his collection, Shockey says he already owns “one of the coolest pieces”—the Green Goblin head.

“I bought the head used on the Happy Toyz truck in Maximum Overdrive from a man in Wilmington, North Carolina back in 1987. He saw a wrecker taking the truck to the junkyard down the road from his house. He asked if he could have it and they gave it to him,” said Shockey. “A couple of months later, he was going to move and couldn’t keep it, so he ran an ad in the newspaper. My brother saw the ad and called me to see if I wanted it to display in my video store. I called the man up and drove to North Carolina that night to get it.”

After selling his video store, the Green Goblin laid in Shockey’s back yard for nearly 20 years. In 2011, he moved the prop into his garage and began restoration efforts.

“At the end of the movie, Emilio Estevez blew up the front of the truck that it was mounted to, and as a result, the whole jaw, lower teeth and tongue were missing,” said Shockey. “The tops of the ears were gone as well. What was left was badly burnt, so I spent two years, nights and weekends restoring it.”

In March 2013, Shockey took the restored Green Goblin head on the road to share at conventions across the country.

“I take the Green Goblin head and smaller items to Horror Cons and Comic Cons from Florida to Maine. We did twelve shows last year and have quite a few schedled for this year,” said Shockey. “Last week, I went to Niagara Falls Comic Con, in Niagara Falls, Canada. This was our first show out of the country. I have been contacted about attending one in the U.K. as well.”

Shockey says he has been a collector “as far back” as he can remember.

“My wife says I am a hoarder, but I say I’m a collector,” said Shockey. “For me, the biggest reward is being able to share my items with the fans!”